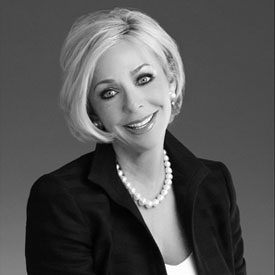 Trisha Wilson is the founder and Chief Executive Officer of Wilson Associates, an interior architectural design firm based in Dallas, Texas, with offices in New York, Los Angeles, Singapore, Shanghai, Abu Dhabi and Cochin, India. The firm was created in 1971 and now employs a staff of over 325 professionals. Raised in Dallas, Texas, Trisha Wilson is a dynamic businesswoman and an internationally acclaimed hotel designer who has built her global empire around the business of designing hotels, restaurants, clubs, casinos, and high-end residences. From five-star luxury resorts catering to every whim of the well-traveled elite to the charming whimsy of childhood dreams at Disney World in Florida and France, Wilson’s signature can be seen at every stop. Wilson Associates is one of the pre-imminent hospitality design firms worldwide, and literally hundreds of projects can be credited to her firm.

Accolades for Ms. Wilson are numerous. In November 2009, she was honored with the Interior Design Award at the 2009 Fashion and Lifestyle Awards sponsored by Fashion Group International, Inc. In 2007, Trisha Wilson received The Pepsi Everyday Freedom Award sponsored by the National Underground Railroad Freedom Center. In December 2006, Ms. Wilson was awarded the VNU inaugural Women in Design Award. In April 2006, Ms. Wilson was awarded the Manfred Steinfeld Humanitarian Award by Hospitality Design Magazine. In 2004, Ms. Wilson was named Distinguished Alumni of The University of Texas at Austin. In 2001, 2000 and 1999, Ms. Wilson was included in Harvard Business School’s Graduate Level Case Study concerning entrepreneurship and management in the creative world. In 1999, she was named Distinguished Alumni of The University of Texas at Austin’s School of Architecture, and she was included in Working Woman Magazine’s annual ranking of the top 500 women in business today. Among many other honors, she was inducted into the Interior Design Hall of Fame in 1993, named Woman of the Year in 1990 by the Network of Executive Women in Hospitality, and recognized as the 1988 Entrepreneur of the Year in the Woman-owned Business Category of Venture Magazine. Her firm’s work receives honors and awards annually in design excellence competitions including the prestigious American Hotel and Motel Association’s Gold Key Award.

Wilson Associates’ work appears monthly in design publications including, Architectural Digest. Ms. Wilson has appeared on countless radio and television broadcasts. Her positive spirit and entrepreneurial expertise has been chronicled in such books as Enterprising Women, Women of Design, and Empowered Spaces. In 2004, Ms. Wilson completed her book called Spectacular Hotels that takes you on a journey around the globe through the world’s most remarkable hotels.

Business associates describe Ms. Wilson as tireless, energetic, and enthusiastic. Currently, she serves on over seventeen boards, and is active in many civic and community organizations as well. She is the Chairman and Founder of The Wilson Foundation. She is on the Board of Directors for JP Morgan Chase Bank in Dallas. As well, she serves on the Board of Directors for the Dallas Chamber of Commerce, the Governor’s Business Council Texas, the Executive Board at Southern Methodist University’s Cox School of Business, and the Advisory Board for the Texas Stampede and the Nature Conservancy Dallas.

A graduate of The University of Texas at Austin, Ms. Wilson serves on the Development Board, is a member of the Executive Committee of the Chancellor’s Council, the Littlefield Society, and the Commission of 125.