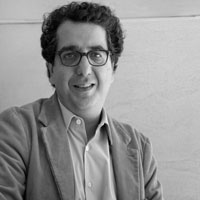 The challenges we faced were also our goals. First, the School of Pharmacy was created in partnership with the City of Kitchener. Its creation was part of a wider revitalization of the downtown…

The challenges we faced were also our goals. First, the School of Pharmacy was created in partnership with the City of Kitchener. Its creation was part of a wider revitalization of the downtown area and this was to be its Landmark building – literally marking the beginning of downtown Kitchener. Secondly, since the University was establishing a new Faculty it was imperative that it attracted great talent to the school through this new building. From the University’s point of view it wasn’t an ideal location, so we had to create the best setting in which to teach, to attract quality professors, and to be distinctive. Lastly, it had to be a state-of-the art facility. We had to design the laboratories of the future. The idea was to create not just another glass box but a space that inspired collaboration by being open, full of light and that would, in its ease of programming, facilitate the relaxed exchange of ideas.

I think the School of Pharmacy solidified our role as architects who, by partnering with a great institution, can reinvent the way it sees itself. We are part of their transformation. Look at the Canadian McKinsey Offices at the University of Toronto, or the Faculty of Law at the University of Toronto and now The Richard Ivey Business School at Western University. Our role as architect is that of a partner. Together we rethink who they are and bring that out.

As mentioned before, the School of Pharmacy and its Dean, Jake Thiessen, in particular, wanted a landmark building. In order to do this it needed to be more than just a glass box; there needed to be an element of storytelling. So, we had this idea about incorporating the narrative of pharmacy and its connection to the plant world into the curtain wall. The plant graphics illustrate the need for someone who can interpret the uses of the natural world. It’s a statement.

To this end, in terms of technology, we worked with Dupont on creating this intricately designed layer of film with UV resistant colours that can be sandwiched between the panes of glass and we tested it so that it wouldn’t fade over time. It was a research and development project with us, where each pane was a customized piece. If not for technology this imaging could not have been possible. It allowed us to merge narrative with an expressive façade .

I am a bit suspicious of what’s called ‘trends’ but at the same time we rely on the best talent, so I am very impressed by what the new generation of designers has to offer. In the context of this project we had young architects making both physical and digital models as well as studies for the exterior envelope of the building, the views out towards the city, and glare and shadow studies – in order to really understand the liveability of each space. Incoming young architects also help push our emphasis on sustainable design. The expressive glass curtain wall was an ingenious response to sustainability; it was our way of responding to various exposures and limit the clear glazing to 40%.