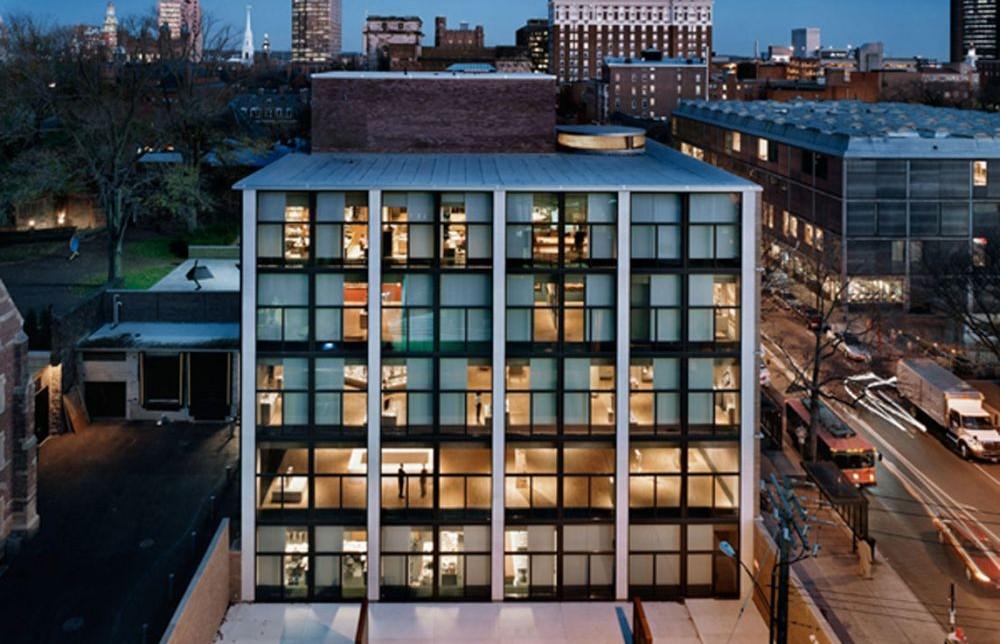 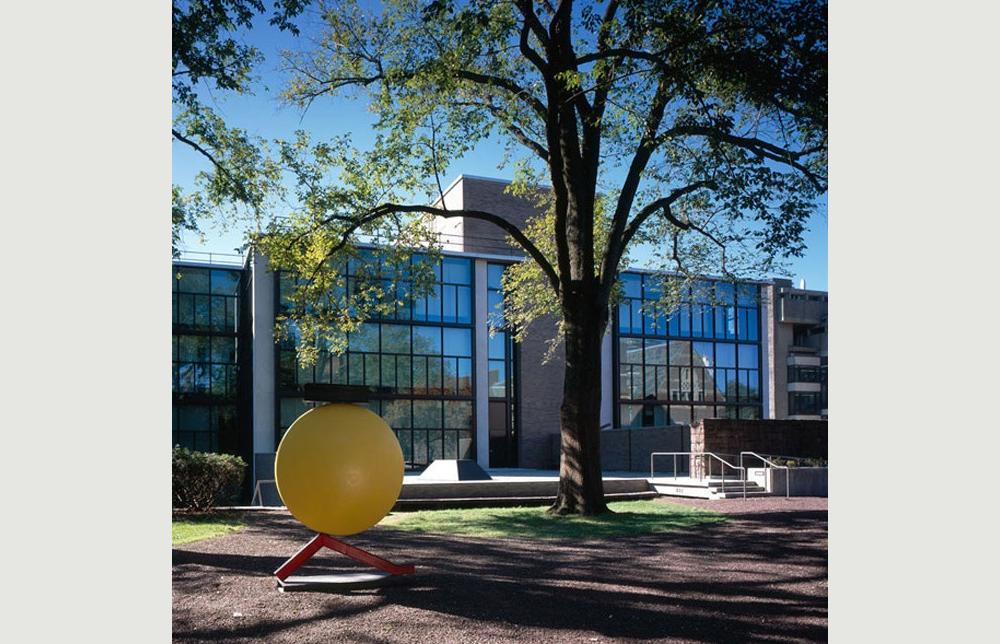 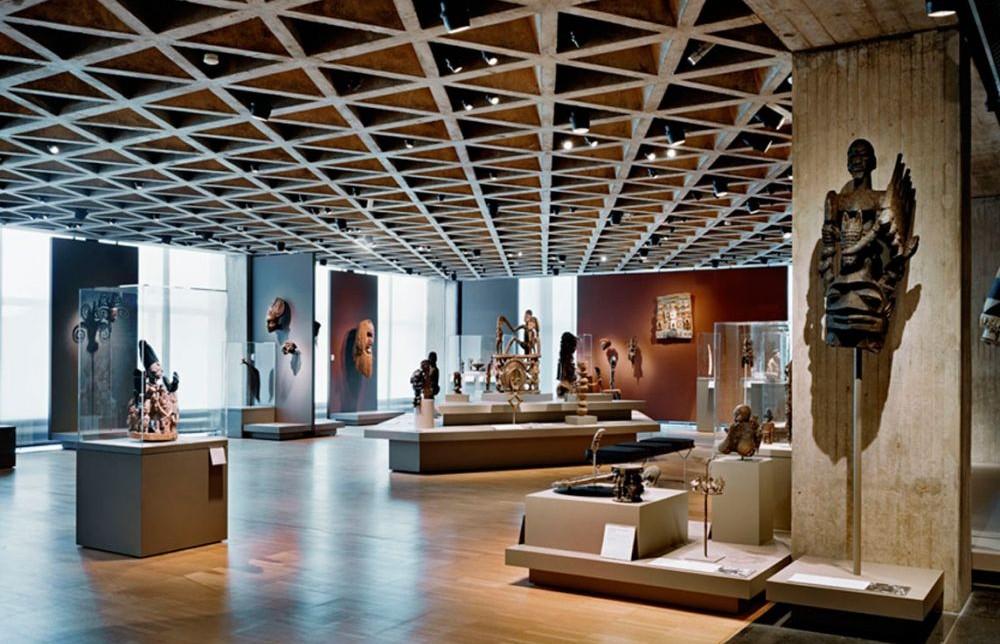 Constructed of masonry, glass, and steel, the building has been acclaimed for the bold geometry of its design, its daring use of space and light, and its structural and engineering innovations.

The renovation of the landmark Kahn building returns the building to its original purity and integrity, while introducing up-to-date building systems for the optimal preservation and display of the Gallerys encyclopedic collection, which stands among the finest of any university art gallery in the world. The renovation enhances one of the many great architectural experiences offered by the Yale campus: The Gallery is located across Chapel Street from the Yale Center for British Art, designed by Kahn in 1974, and the last of his buildings on which construction was begun during his lifetime. Together, the two museums stand in poignant dialogue, not only bracketing the great architects career, but also providing a profound aesthetic experience. That experience is enriched by the presence of the 1963 Art and Architecture building, designed by Paul Rudolph and also located opposite the Gallery, on York Street.

Undertaken with care to preserve all aspects of the buildings historic architecture, the renovation of the Kahn building restores many features of the architects original design that had become altered or in need of repair over the years. At the same time, the renovation has been an opportunity for the Gallery to upgrade many of its systems, in keeping with current museum standards and the growing needs of this internationally known institution.

Highlights of the renovation include the complete replacement of the buildings signature window-walls using modern materials; refurbishment of the tetrahedral ceilings, ingeniously designed to house the electrical and ventilation systems; reinstatement of the original open-space layout of the galleries; and transformation of the first-floor lobby into a media lounge, an inviting information center and gathering place.

One of the most complex and challenging aspects of the renovation was the complete replacement of the buildings original window-wall system, most dramatically along the west and north facades. An important milestone in the development of the modern glass wall, this has long been regarded as one of the most distinctive and beautiful features of the Kahn building. However, because of the materials and technology available at the time of its construction, Kahns window-wall was subject to structural and thermal problems. Following a lengthy and complex process of planning and testing, the architects and engineers were successful in designing a window-wall system that at once addresses the original walls technical shortcomings, duplicates the appearance and profiles of the original, and accommodates modern museum standards of climate control.

The renovation also restores an open exterior courtyard, located on the west faade of the basement level, which had been roofed over in the 1970s to create additional interior space. The courtyard is the new site of Richard Serras Stacks 1990 sculpture. The window wall on this side of the building, which had been reduced from five to four stories, has also been restored to its original dimensions. A sculpture garden on the north side of building has been expanded and refurbished. Among the most distinctive features of the interiors are the Gallerys dramatic tetrahedral ceilings. Fashioned of poured concrete and configured to form a three-dimensional matrix of interlocking triangles, they are at once visually arresting and functional, providing housing for the buildings electrical and ventilation system. In addition, the lighting capacity of the Gallery has been doubled.

Kahns originaland at the time of its construction, highly innovativespacious open plan for the interiors has also been restored in the renovation. The building had initially included studios for both art and architecture students, as well as a series of expansive, uncluttered exhibition spaces. However, as the Gallerys collection grew, the studios were relocated to another building, and the museums open spaces were partitioned into smaller galleries, classrooms, and offices. With the removal of these partitions, the galleries once again provide the unobstructed, light-filled vistas Kahn originally envisioned. The renovation reintroduces a newly engineered version of Kahns famous mobile pogo wall units, which allow the gallery spaces to be temporarily reconfigured as needed.

The renovation of the Kahn building benefits from the installation of new mechanical equipment that provides tighter control and greater efficiency as compared original building systems circa 1953. Among the many improvements to the building are new variable speed pump drives, an electronic building management system BMS and related electronic control equipment, carbon dioxide sensors to control and optimize the amount of outside air introduced into the space, reheat coils for better HVAC control and zoning, fewer and more efficient air handling units with premium efficiency motors, and state-of-art humidifiers resulting in less steam waste. Central to the climate control strategy of the museum was the replacement of the buildings existing exterior curtain wall. The original all-steel curtain wall system provided a thermal bridge between the warm and humid museum interior and the cold Northeast winter exterior. Not only did this thermal bridge create some unsightly conditions condensation and rust, but it was thermally inefficient. The new curtain wall system, designed to precisely replicate the historic original wall, is aluminum with thermal bridging and modern-day insulated glass units with low-E coatings. Furthermore, the retention of as much of the buildings original fabric as possible concrete, concrete block, brick, wood and terrazzo flooring, etc. diverted such material from the waste stream and limited the need for new materials. An HVAC commissioning period was enacted before building occupancy to provide the best indoor environmental air quality thereby aiding in the conservation of artwork and improving the air quality for visitors.