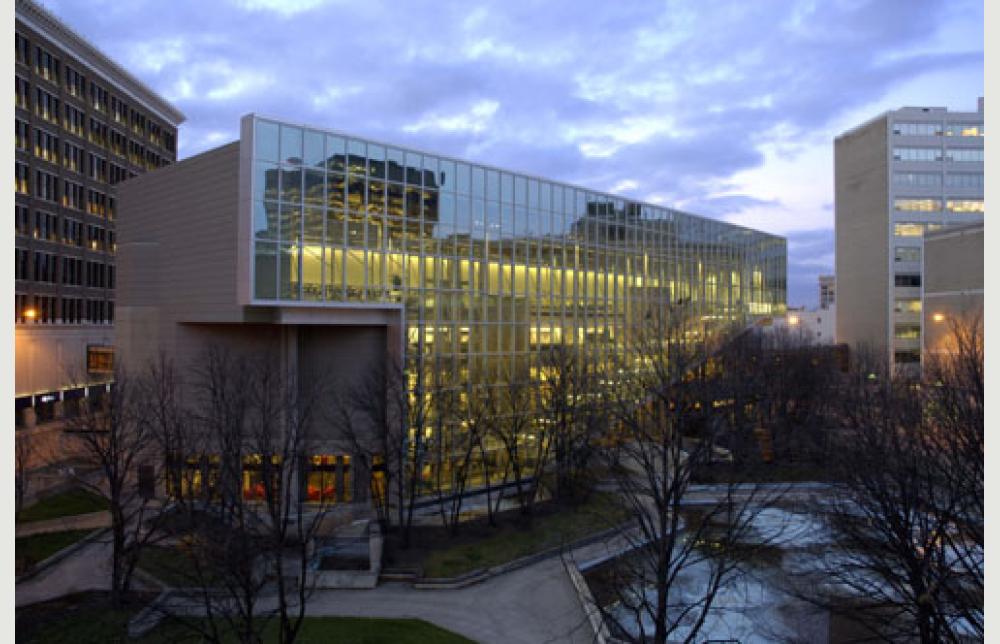 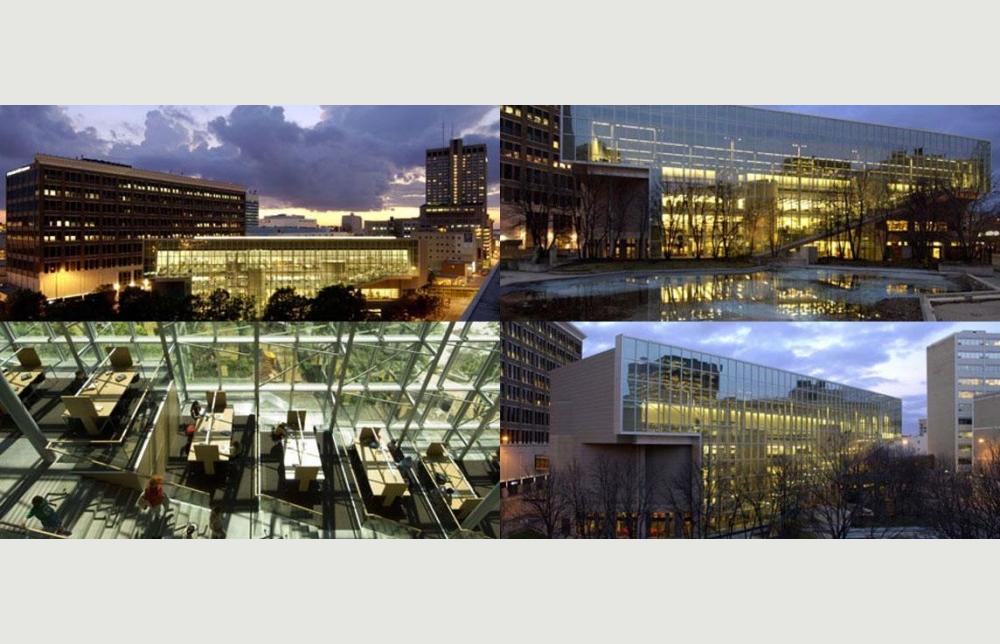 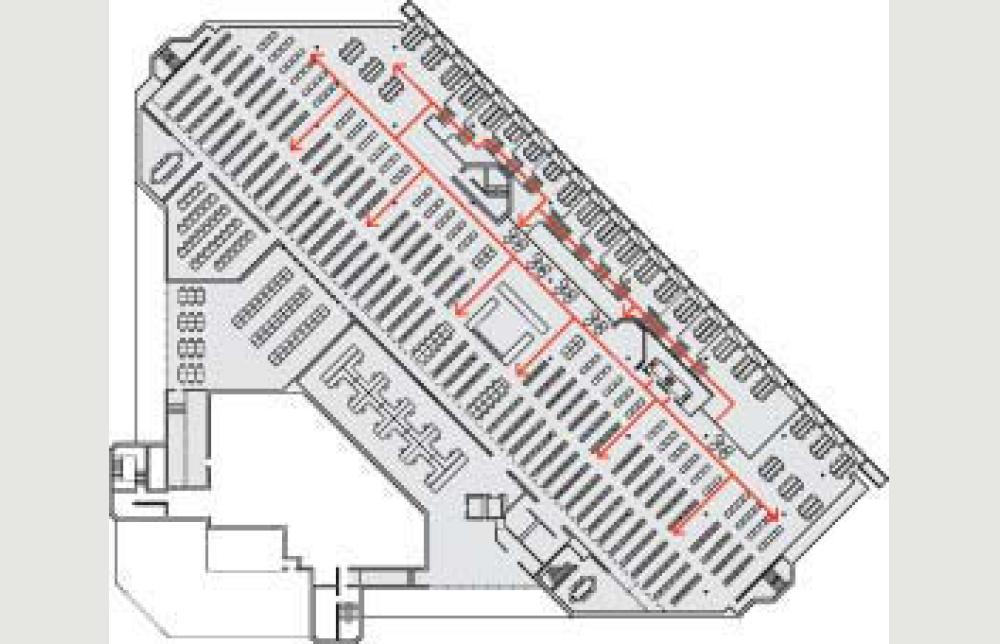 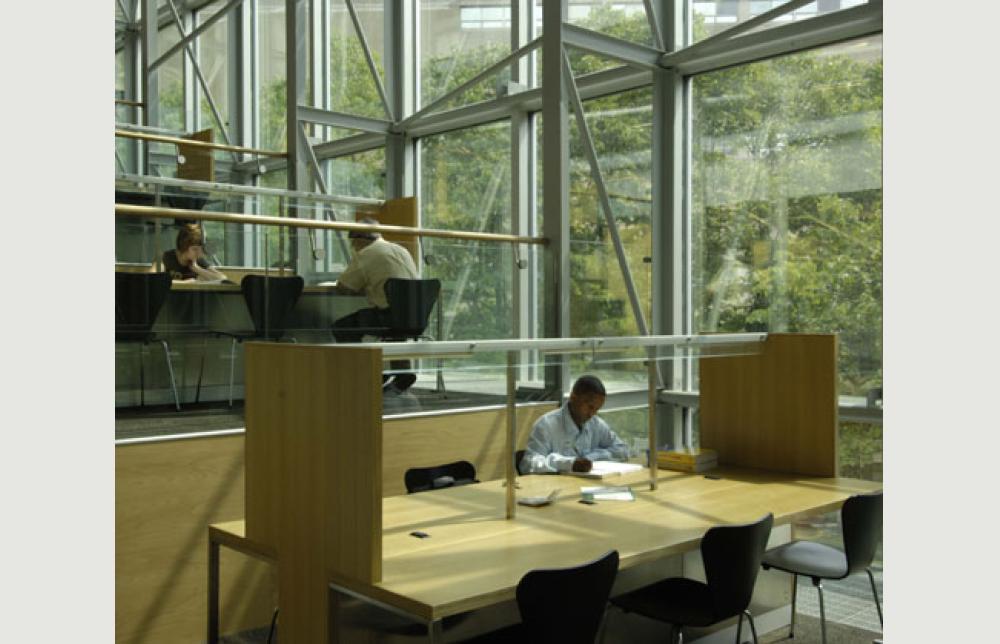 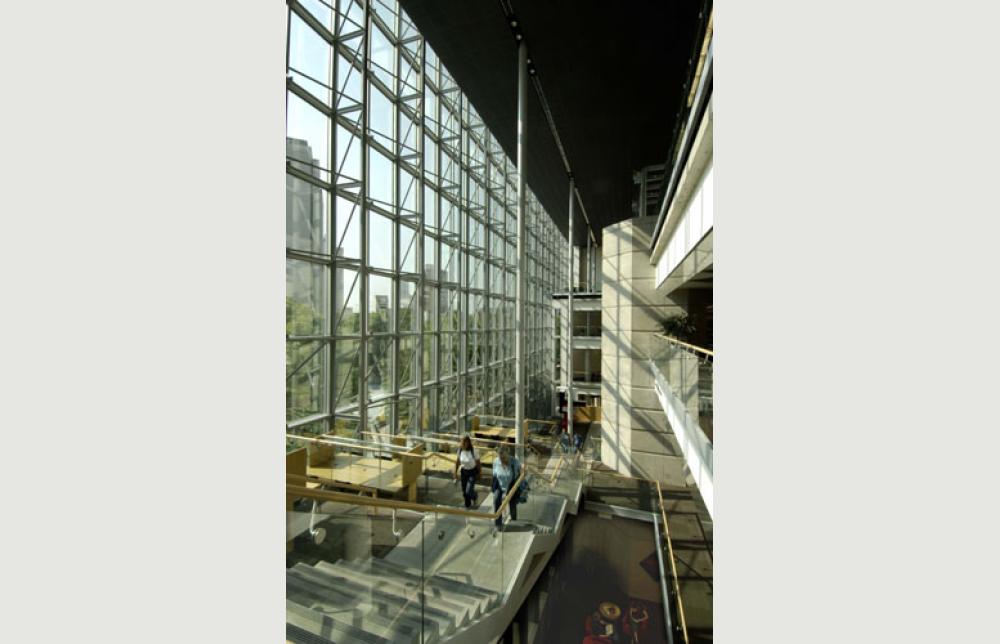 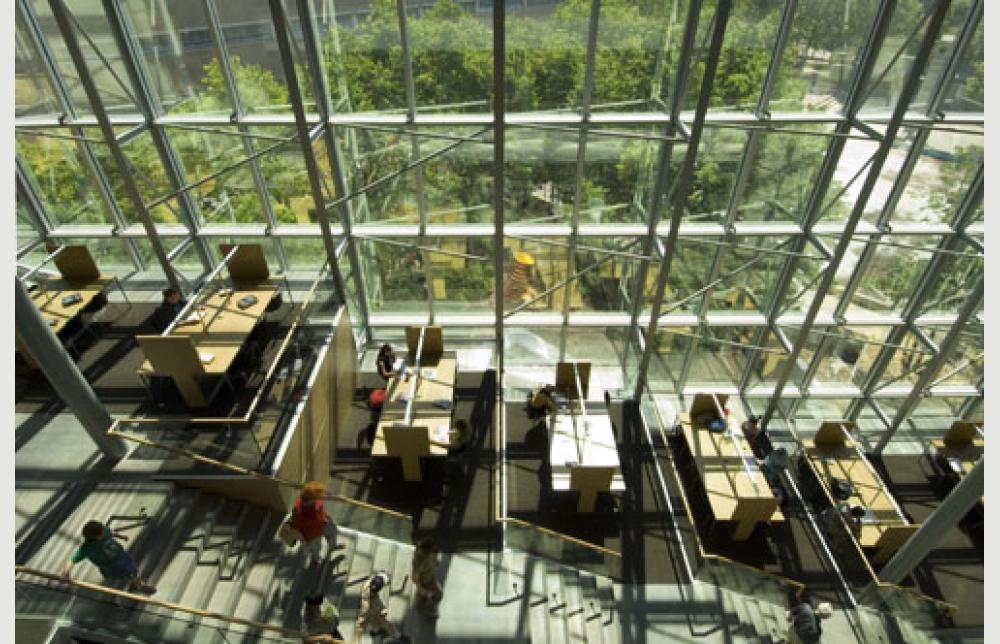 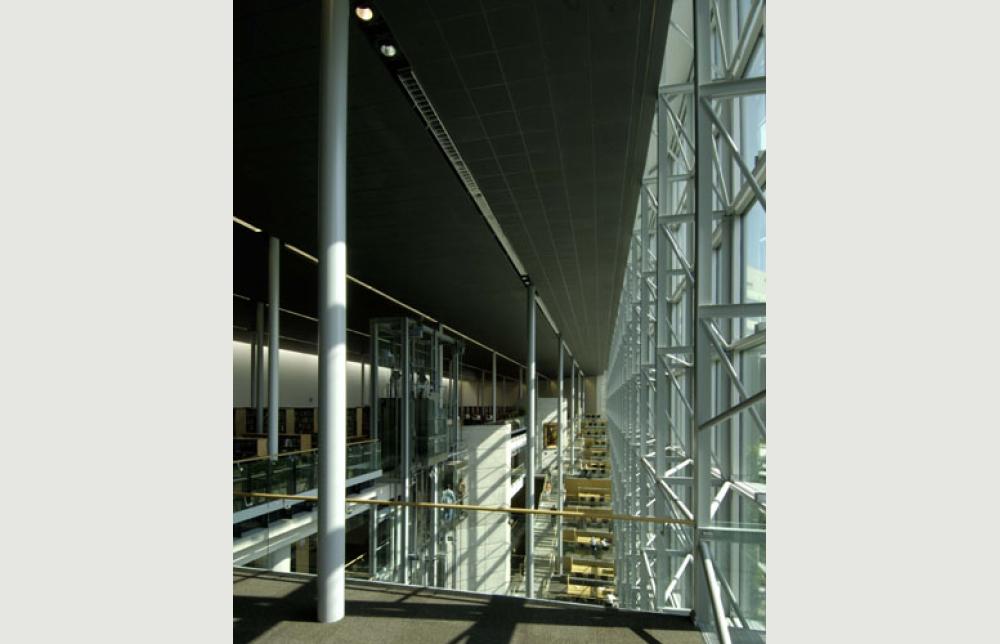 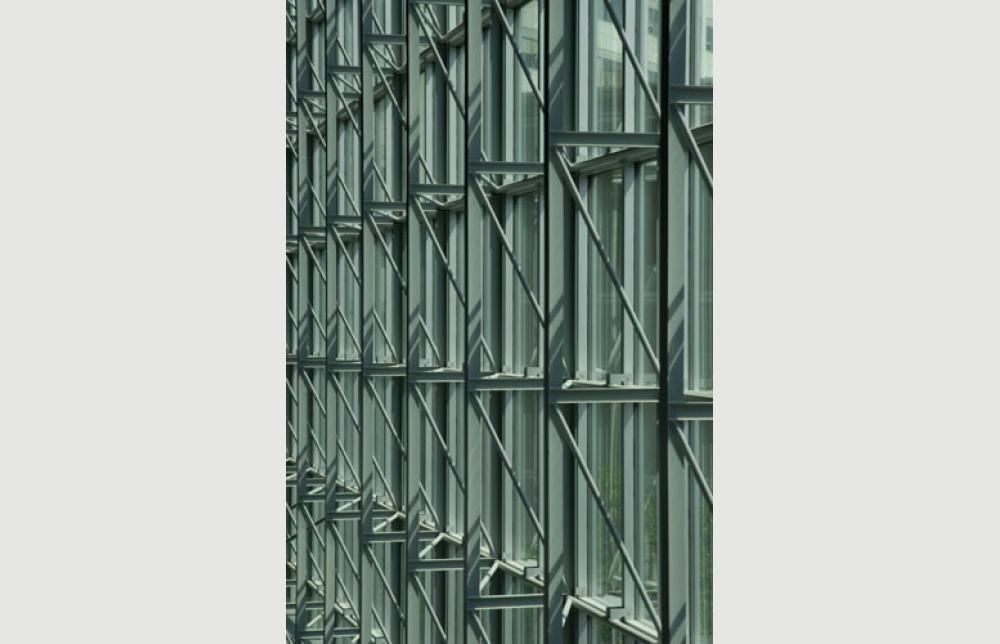 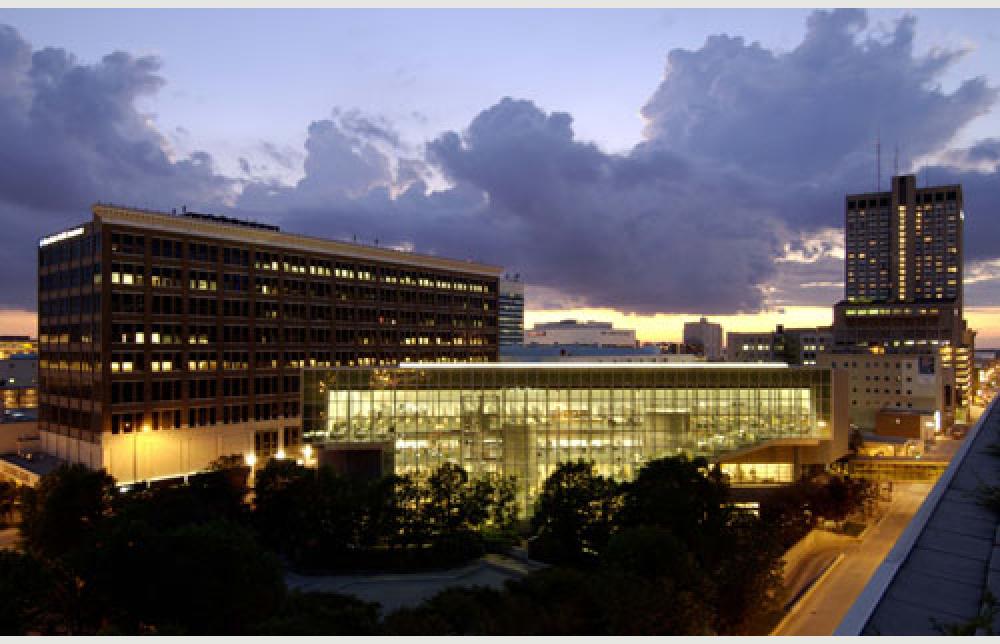 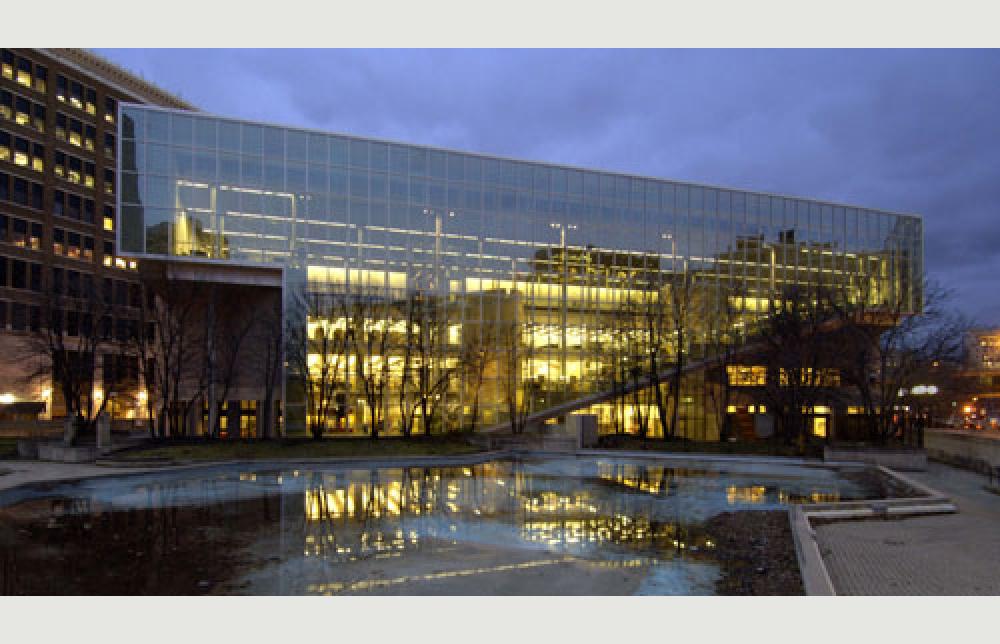 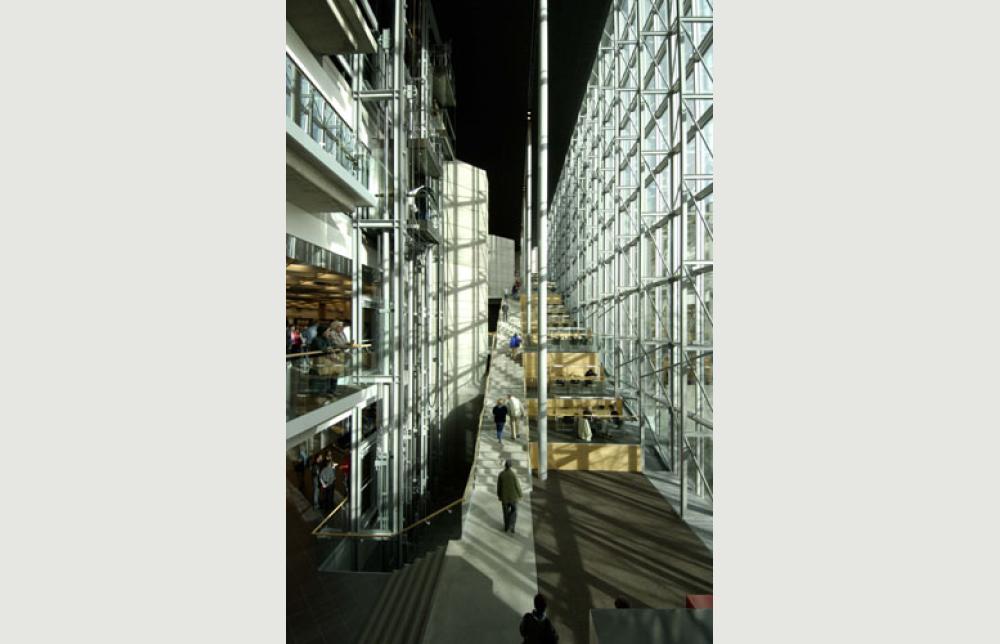 Winnipeg Centennial Library, originally constructed in 1976 as a three-story building, occupies a city block along with a large public park,. Both library and green space stand on a below-grade parking garage. The library, which is roughly triangular in plan, is constructed of reinforced concrete; the concrete is exposed on the interior, while the exterior is clad in pre-cast panels. Connection between the 1976 library and park is surprisingly limited. The monolithic concrete and the disconnection from the setting result in a fortress-like building with generally closed and introspective interiors.

The addition to the library, which began in 2002 as the winning entry in an invited design competition, includes reorganization and expansion of the collections, reconfiguration of the circulation systems, and creation of new social spaces, as well as renovation of the existing library. Expanding the library into the park would have destroyed valuable public green space and required costly foundation reinforcement within the parking garage. An alternative was to extend the library upward. Fortunately, the building had the structural capacity to accept an additional floor, provided it was light in weight; it also needed to be re-roofed. Thus, most of the added space is contained in a new, light, steel-framed fourth floor under a new roof.

Because of severe winter conditions, many of the buildings in downtown Winnipeg are linked by a continuous interior tunnel and skywalk system. The library is connected to this system by bridges at the second level. An enlarged two-story lobby, created by removing a portion of the second floor, allows the street-level entrance to the library, as well as a gift shop and café within the lobby, to interconnect with the skywalk.

From this urban intersection, patrons are drawn through the building, along an interior “street” animated by displays and bookselling events, and to the park. At the park edge, new public elevators and an elongated system of stairs and reading terraces tie the largely independent existing floors to each other and to the new fourth floor. The glazed wall of this multi-story space opens every level to light, landscape, and city. All public and collections space is accessible from this linear route. The compact footprint of the addition maintains maximum park space, allowing the library to take advantage of its location, while the highly visible, interactive terraces, an interior topography at the scale of the park, generate a radically new identity for the library.

The library is ordered in strips, in a series of zones that run parallel to the window wall and across the long dimension of the space. The strips accommodate the programmatic components of the library in identifiable categories. The first strip is the park, an integral part of all public spaces in the building. The second is all forms of reading—tables, comfortable chairs, and casual seating. Third is low masses, such as reference collections, help desks, and computer stations, and fourth is high masses, such as shelving running in clear sequences. The fifth category comprises rooms: closed reading rooms, offices and meeting rooms, staff areas, service areas, and book handling access. The strips progress from park to interior, from open to enclosed, from low to high, from areas of greatest public access and interaction to areas of privacy and quiet. This spatial order allows all visitors to see and understand the general arrangement of collections and functions whether they approach from elevators or from reading terraces and stairs.

On the new fourth floor, the non-fiction collection is organized as a single run of clearly indexed material. Various subjects within the collection are highlighted by “focus” areas. These exhibit spaces, which are immediately visible at the entrance to the floor, are intervals inserted into the continuity of the collection to emphasize subjects often submerged within the numerical anonymity of the Dewey Decimal system.