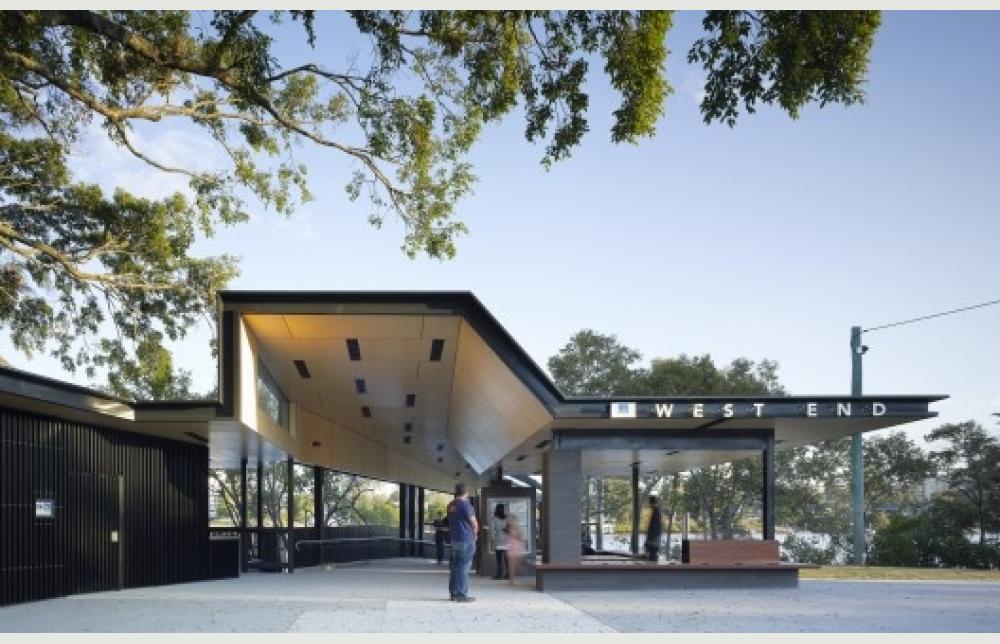 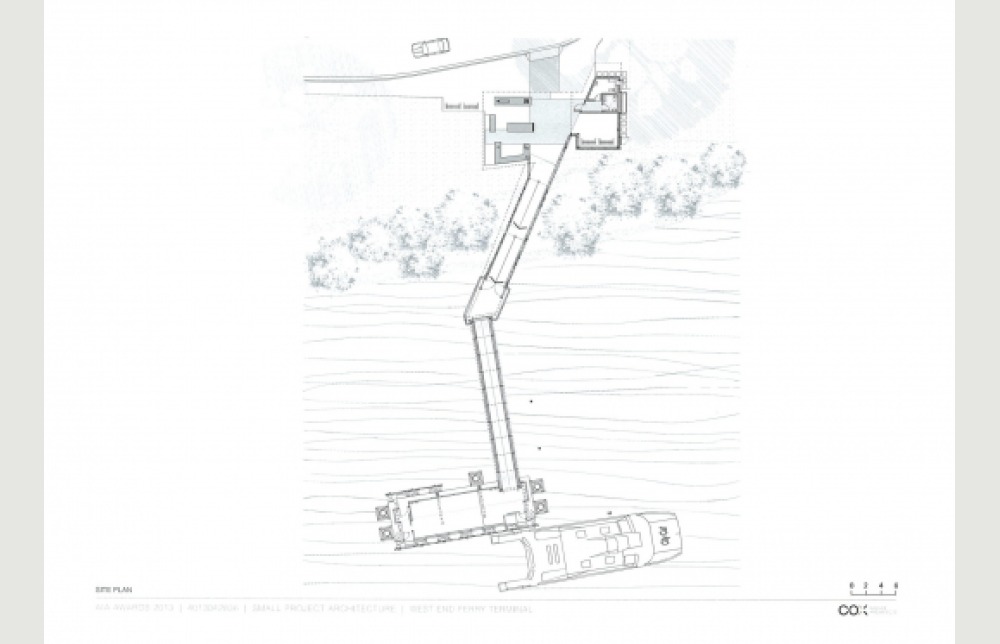 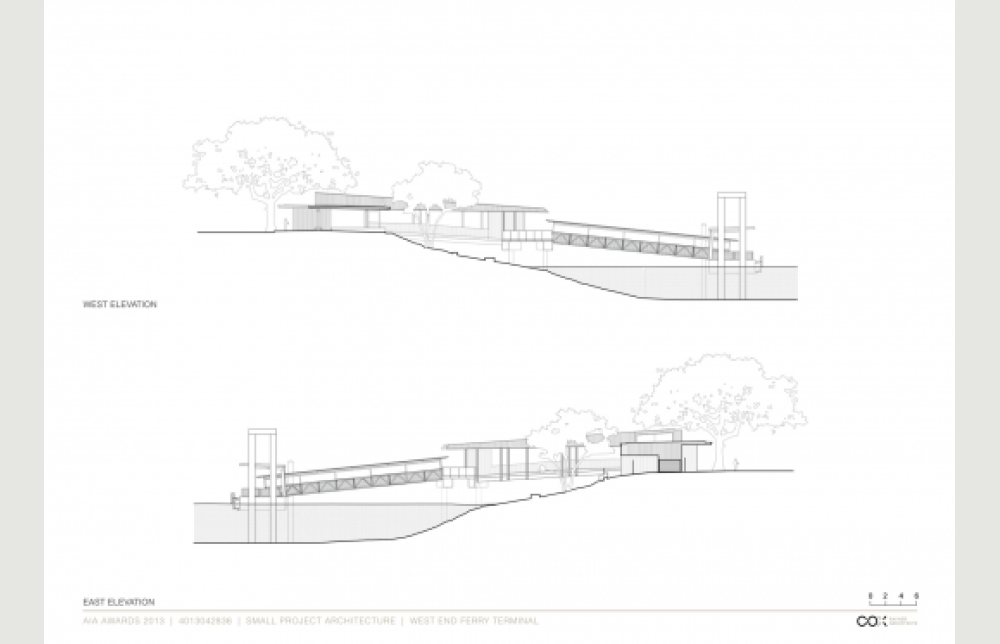 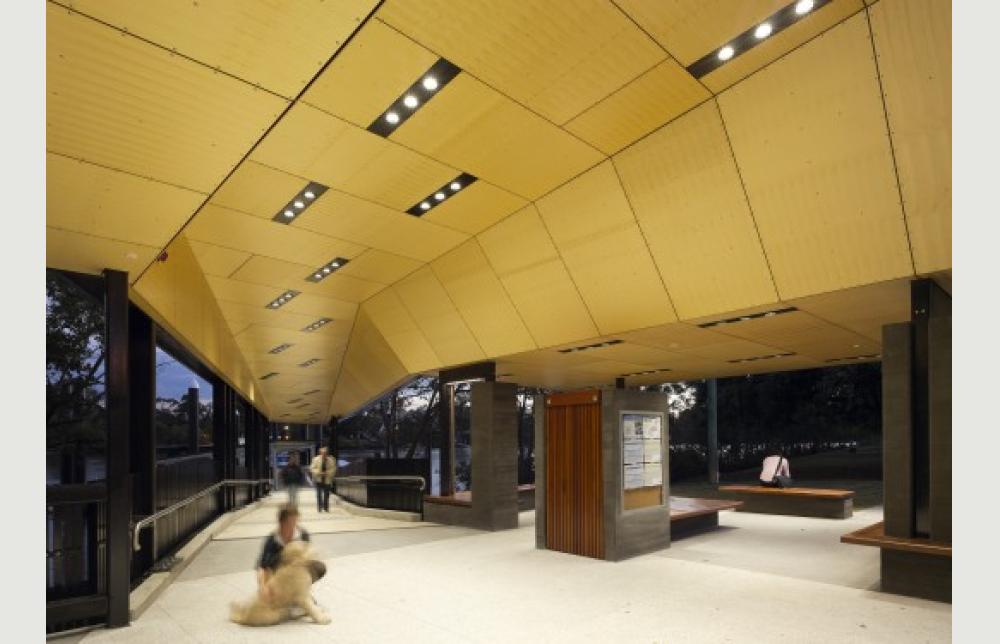 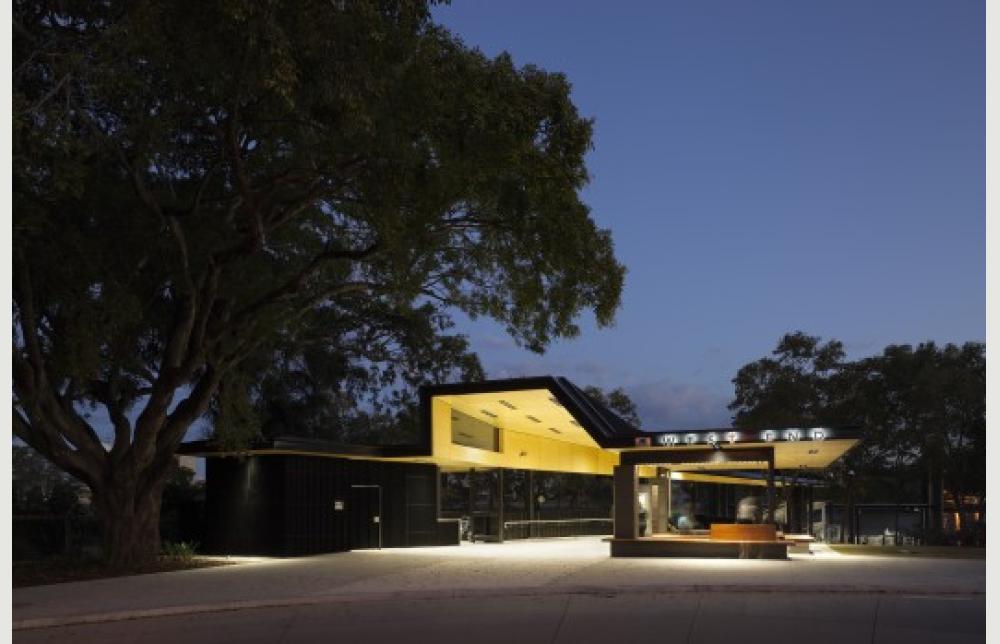 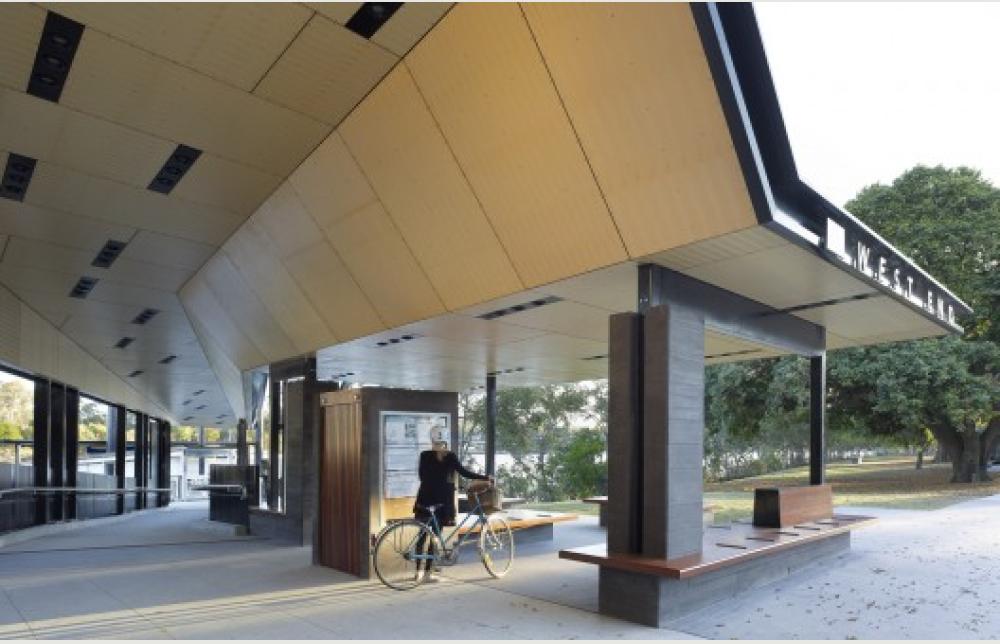 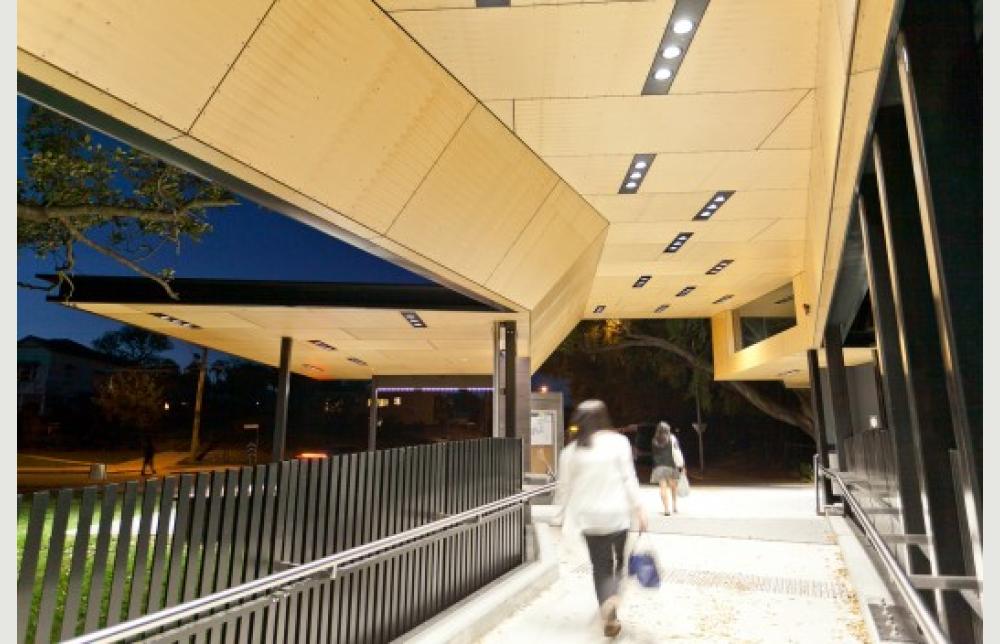 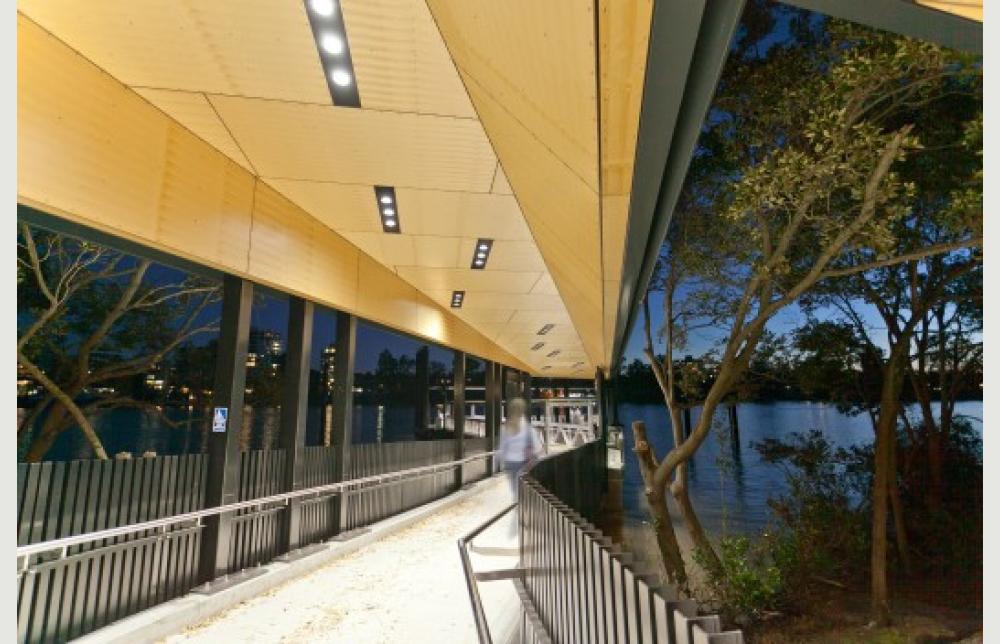 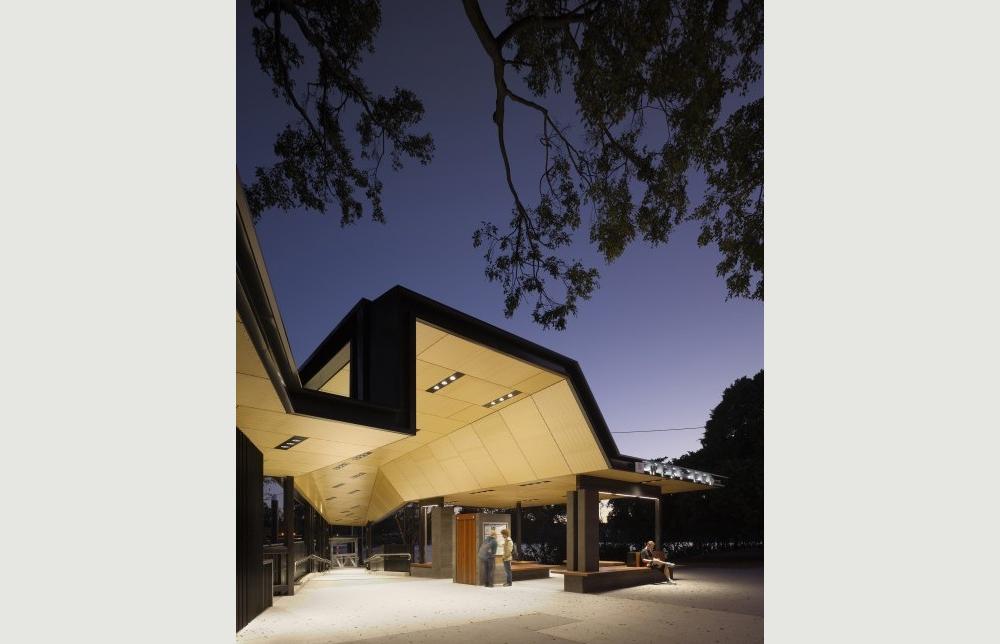 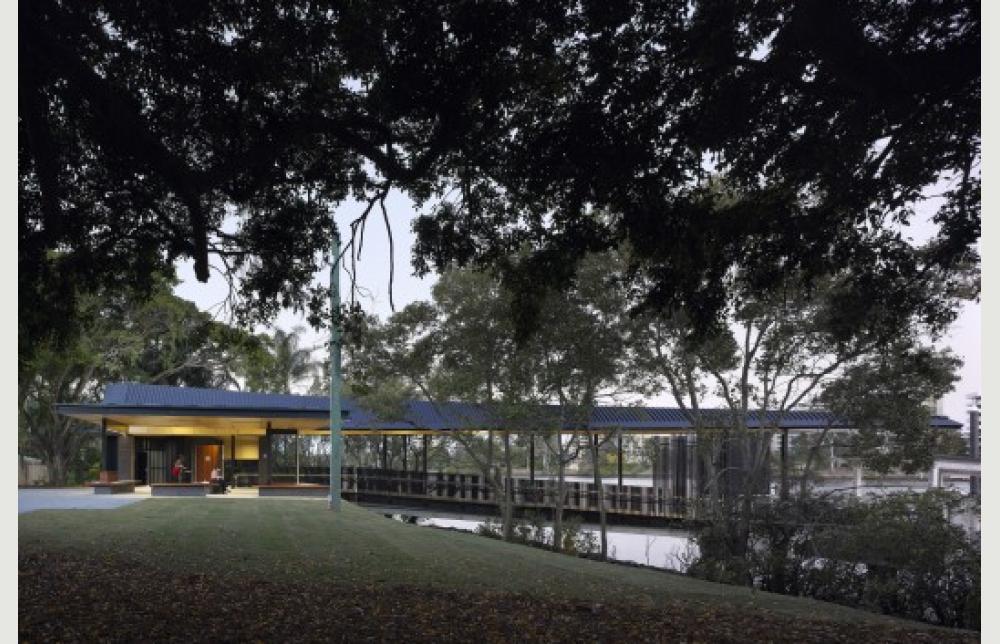 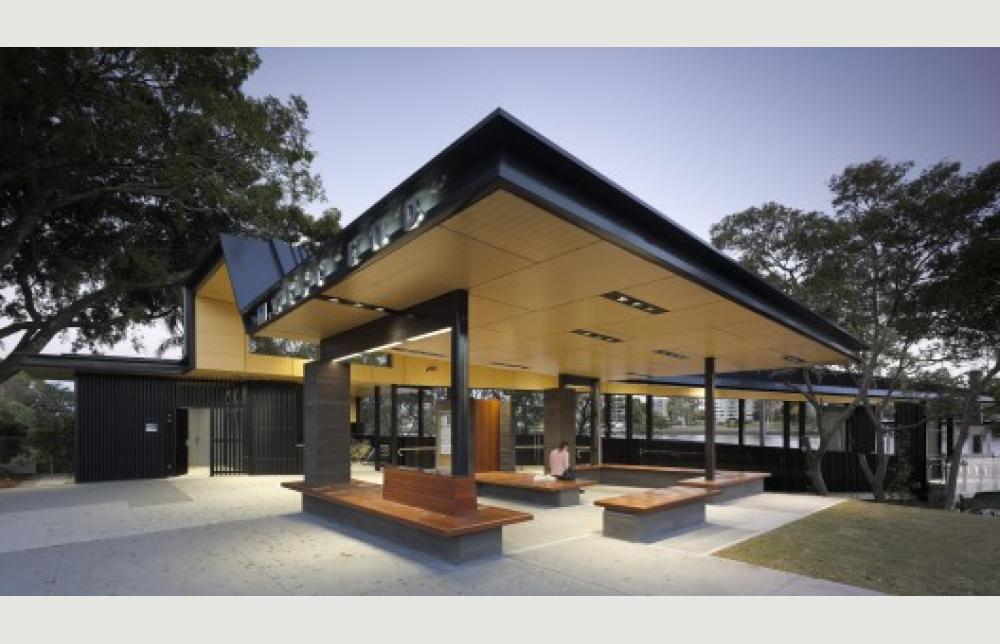 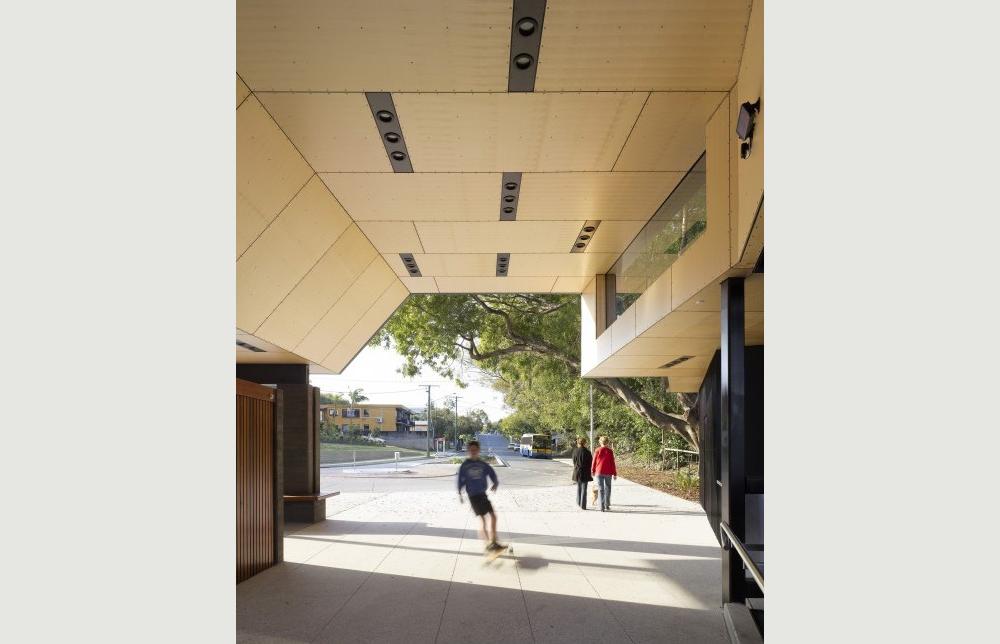 The West End Ferry Terminal is a small project that was designed to simultaneously generate a new typology for Brisbane’s Citycat Terminals and act as a sheltered social gathering space at the end of one of Brisbane’s historic riverfront parks, one endeared in the hearts of the West End community.

As a result, the whole conception of the terminal was subject to many community consultation events, most originally opposing removal of an existing brick post-war facility which had insurmountable CEPTED issues.

The terminal simply responds to its core role as conduit from bus station to ferry pontoon, rising as a spinal volume to accentuate its connectivity.  The spine slopes and angles to correspond with the journey, its form wrapping out into lower scaled wings which accommodate seating, cycle and public amenities.  Both its daytime shade-providing form and its contrasting illuminated night-time character have become emblematic of West End, for which the terminal has become its community’s most beloved social space.

Conceptual Framework
West End Ferry Terminal was conceived as a sequence of sheltered spaces rising as a spine corresponding with street-pontoon movement along its centre and winging out along its edges into compressed social and amenity spaces.  These edges were designed to create a layering of scales with minimal impact upon Orleigh Park.  A series of devices – frames, furnishings, signs and lighting – were conceived to create the impression of a canopied outdoor ‘living room’ for the community, and simultaneously a legible form for accessing Citycat timetables, arrivals and departures.

Relationship of Built Form to Context
The terminal is the result of numerous physical model studies aimed at optimising its spatial relationship with the adjoining significant fig tree and the lower canopies of the mangroves aligning the river bank.  Subtle shifts in the building’s geometry were made to nestle the terminal with this context, present human scale to Orleigh Park, and create a distinct identity of West End community lifestyle.  The utilisation of raw materials and the juxtaposition of furnishing elements was devised to complement the context, form a memorable park pavilion, and optimise visual rapport with the river, mangroves and park.

Cost/Value Outcome
The terminal is composed of ready-made materials and built of simple fabrication techniques able to be constructed by a domestic builder with low cost overheads.  This strategy resulted in a completed cost of $3.5 million which has delivered a place which provides multiple social roles as well as its core function.

Sustainability
The West End Ferry Terminal is innately sustainable in that it’s amenity, legibility and accessibility strongly support the use of public transport, specifically ferry transport, as a major provider of commuter movement to and from the city.

The terminal is designed in contrast with previous standard terminals along the Brisbane River in its sensitive siting to context, particularly in this case where it required community support and endorsement to proceed, such were the communities concerns in relation to Orleigh Park.  The siting includes avoidance of interference with a significant fig tree and insertion within the river mangroves averting any disturbance.