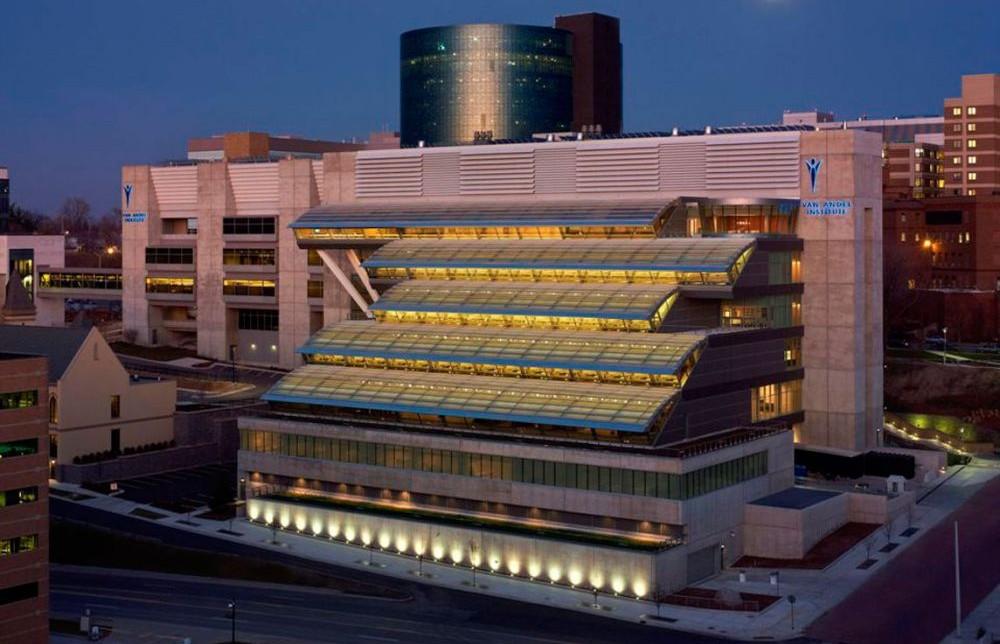 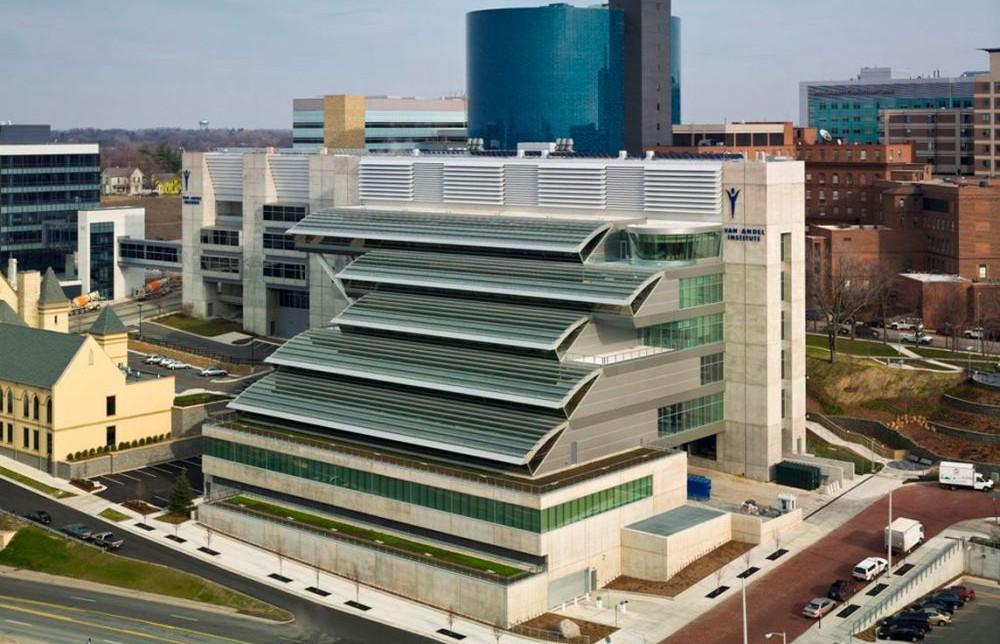 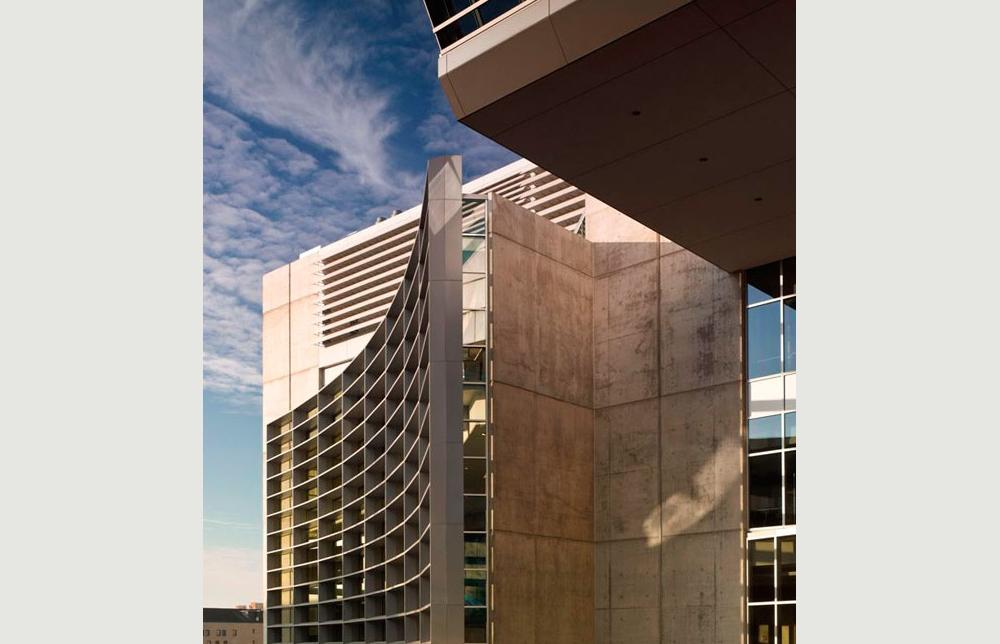 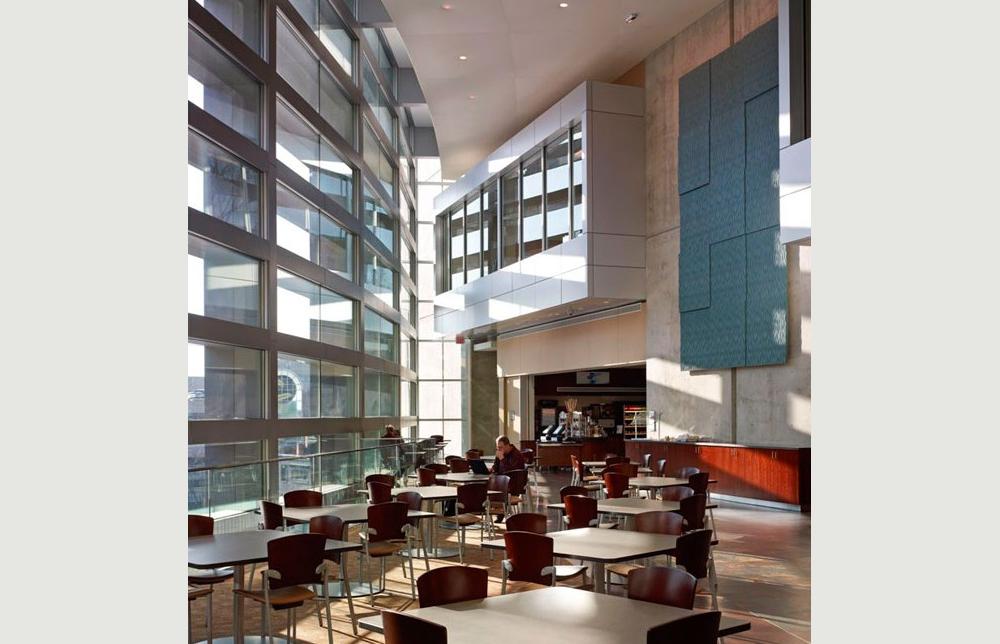 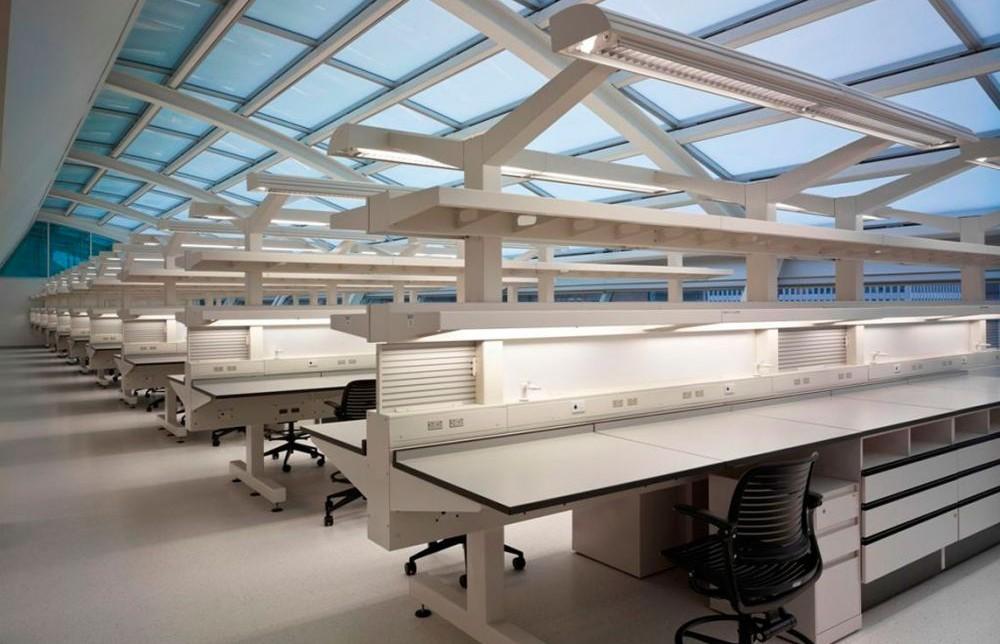 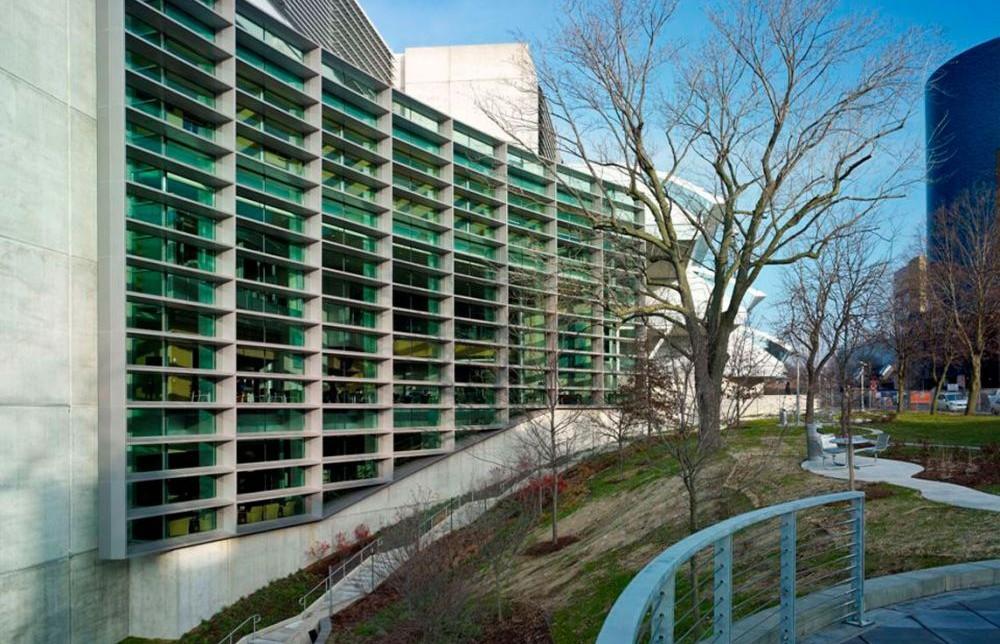 Rafael Violy Architects announces the completion of Phase II of the Van Andel Institute Education and Medical Research Center in Grand Rapids, Michigan. A major fixture of Grand Rapids Medical Mile, the Institute was designed by Violy in 1997 as a phased-growth facility, expandable and adaptable to meet the changing needs of its team of elite researchers. Phase II adds 240,000 square feet of new laboratory space as well as innovative environmental and service features that bring the building to the forefront of the health sciences in the 21st century.

Built into a hillside overlooking downtown Grand Rapids, the Van Andel Institutes dramatic stepped silhouette follows the sloping topography of its scenic site. Inside, terraced floors punctuated by double-height atria are glazed in segmented-arc skylights that allow natural light to flood into the laboratories below. At the heart of the building, the central research space is as functional as it is flexible, with equipment-intensive zones located beneath interstitial service levels for ease of maintenance on each floor, and laboratory benches that have been transformed into mobile lab stations, complete with integrated task lighting, power/data management systems, and vacuum and specialty gas piping. Connecting the laboratories, brightly lit public corridors and stairwells encourage chance interactions among researchers, while on the lower floors, light- and vibration-sensitive spacesincluding a 325-seat auditorium and imaging spacesare tucked into the face of the hill, along with loading docks and parking for 35 cars.

With Phase II, the building has doubled along the line of its vertical concrete service core, which now acts as a central spine embedded in the structure. To the east of the core, three sky-lit floors housing laboratories and administrative offices are cantilevered over the main entrance plaza and lobby; from there, visitors can directly access conference and event spaces, as well as the cafeteria and library. To the west, five more laboratory and administrative floors cascade down the hill, offering researchers and administrators breathtaking views over downtown Grand Rapids and the Grand River beyond.

Phase II is also expected to achieve LEED Gold in 2010. Sunlit labs mean less need for electric lighting, and 13,000 square feet of photovoltaic panels makes up much of the difference. Waterless urinals and a vegetated green roof reduce water consumption and runoff; the building itself was constructed in large part from materials extracted or manufactured locally and from recycled materials. Even the sitein a dense urban area, on a former brownfield site, with little disruption to the surrounding natural habitatadds to VAIs green credentials.

About Rafael Violy Architects
Founded in New York in 1983, Rafael Violy Architects now also has offices in London, Los Angeles, San Francisco and the United Arab Emirates. Internationally known for architectural projects around the globe, the firm has designed many landmark cultural and civic complexes as well as institutional buildings and master plans. Over the past quarter century, the practice has continually demonstrated its ability to reinvent institutional typologies and integrate the public realm into civic buildings.
The unusually diverse work the firm has completed includes award-winning courthouses, museums, performing arts centers, convention centers, athletic facilities, banks, hotels, laboratories, recreational venues, residential commissions, and commercial, industrial and educational facilities. Projects range in scale from laboratory casework to urban design and master planning. The firm has also completed several projects involving the restoration and expansion of large-scale buildings of significant historical and architectural value.
The firms staff of over 150 design professionals, including architects, structural engineers, interior designers, computer visualization specialists, model makers, artists, and fabricators, has the capacity, structure, and experience to assume complex projects of any scale.