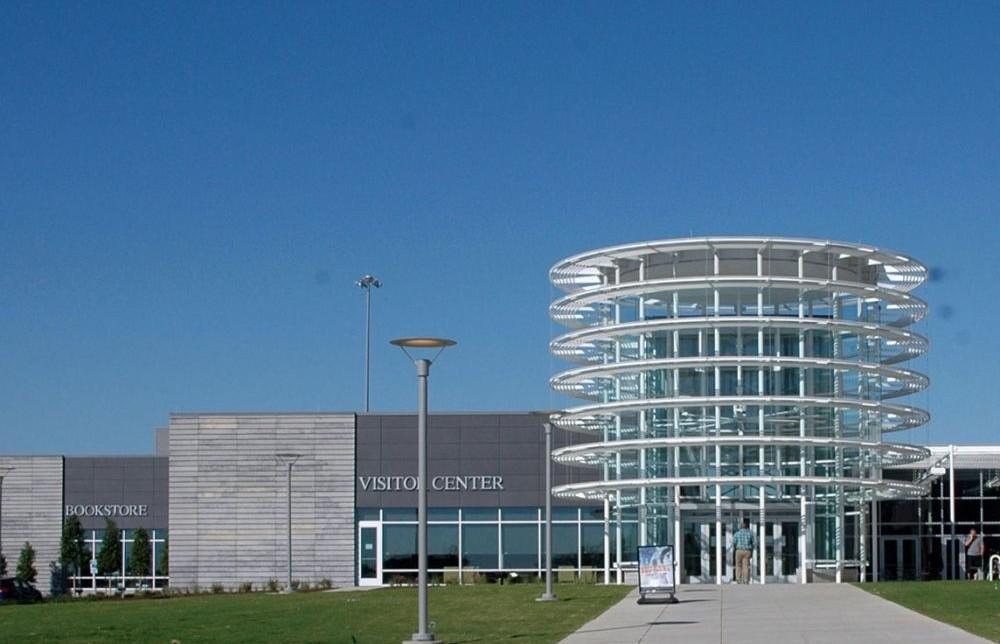 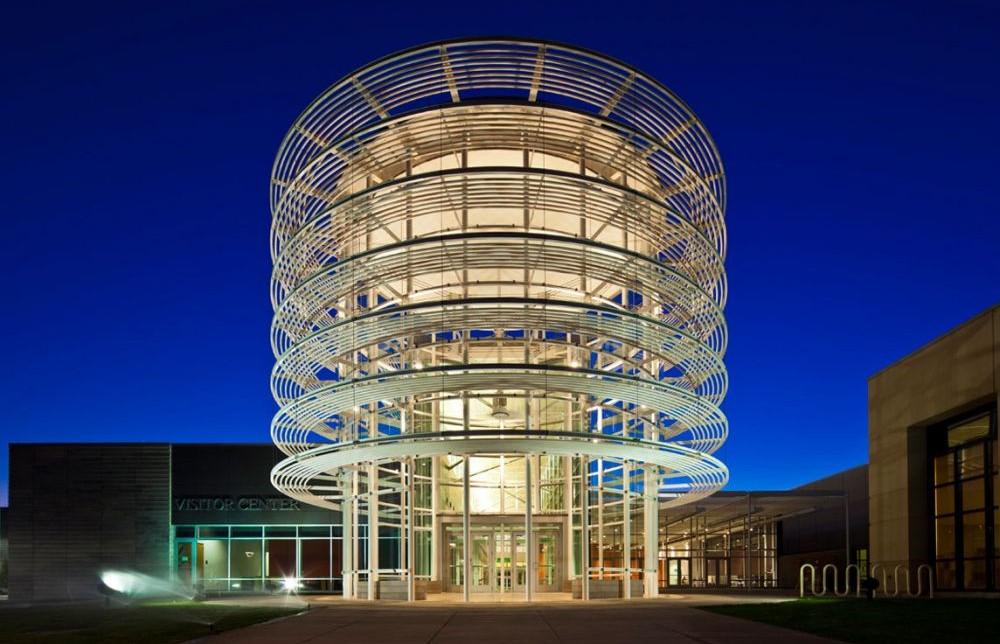 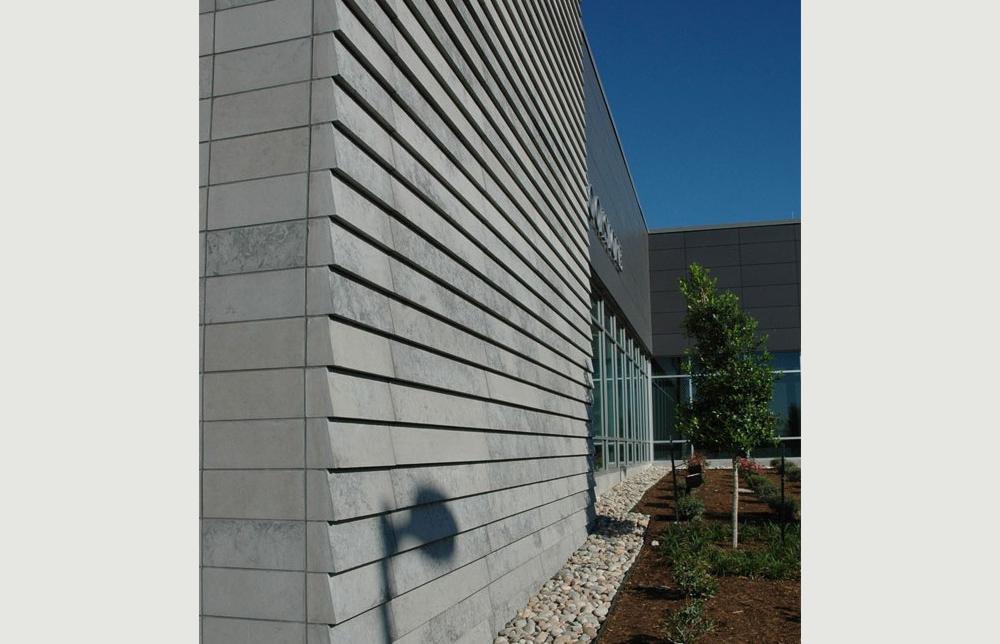 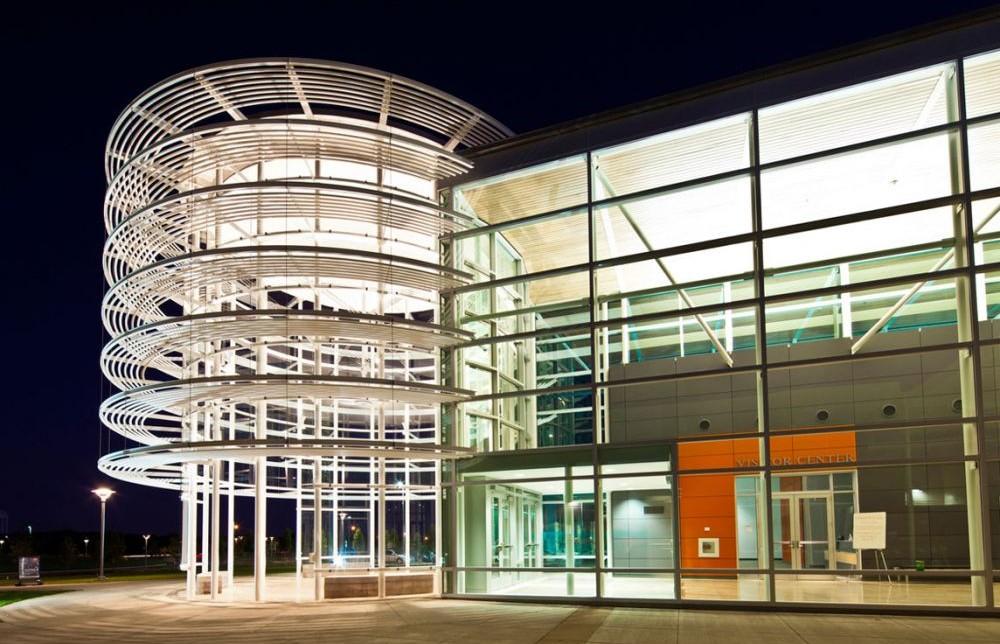 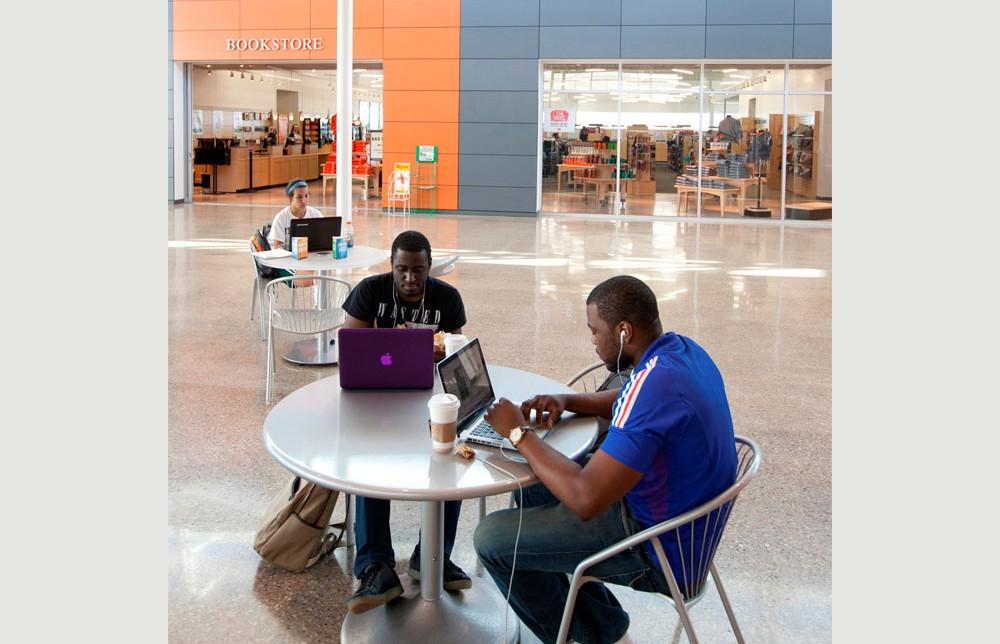 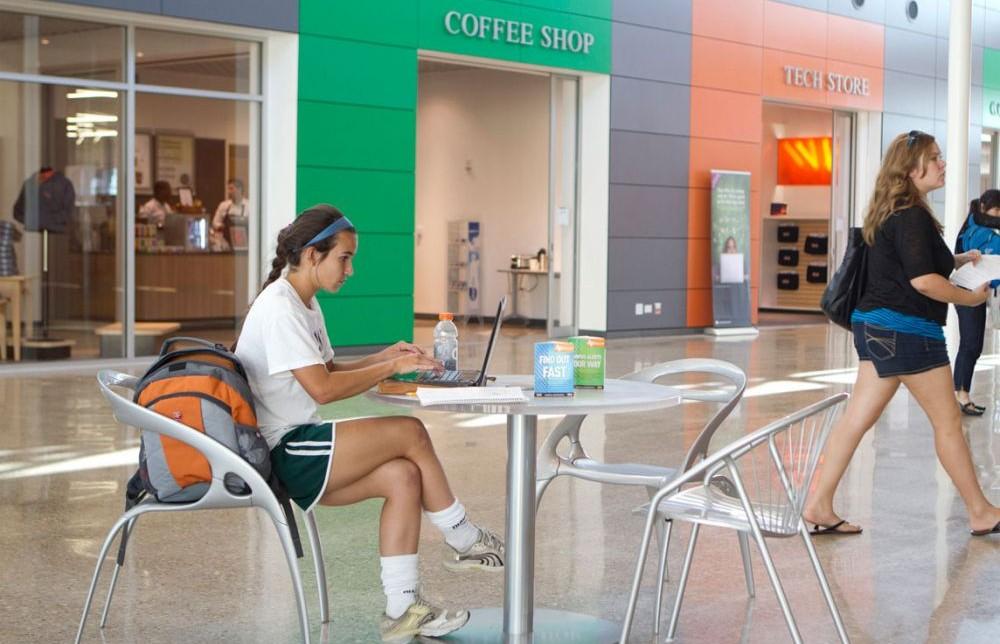 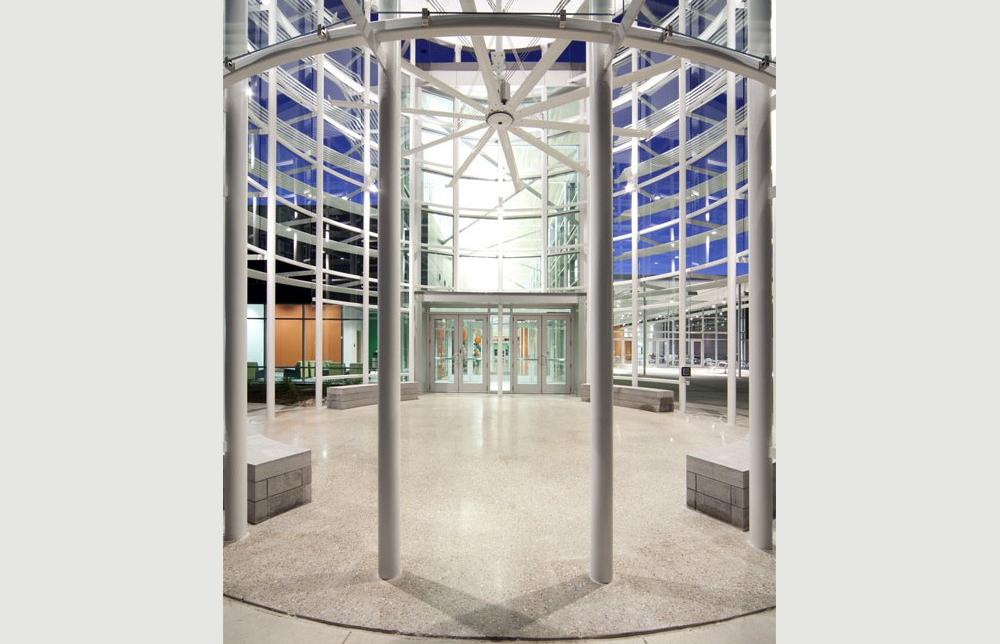 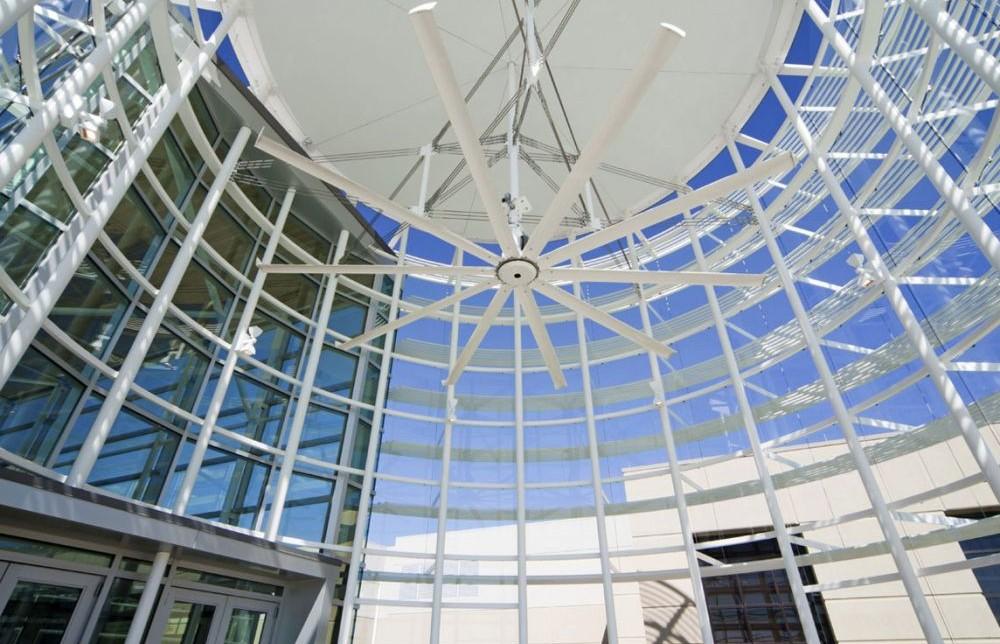 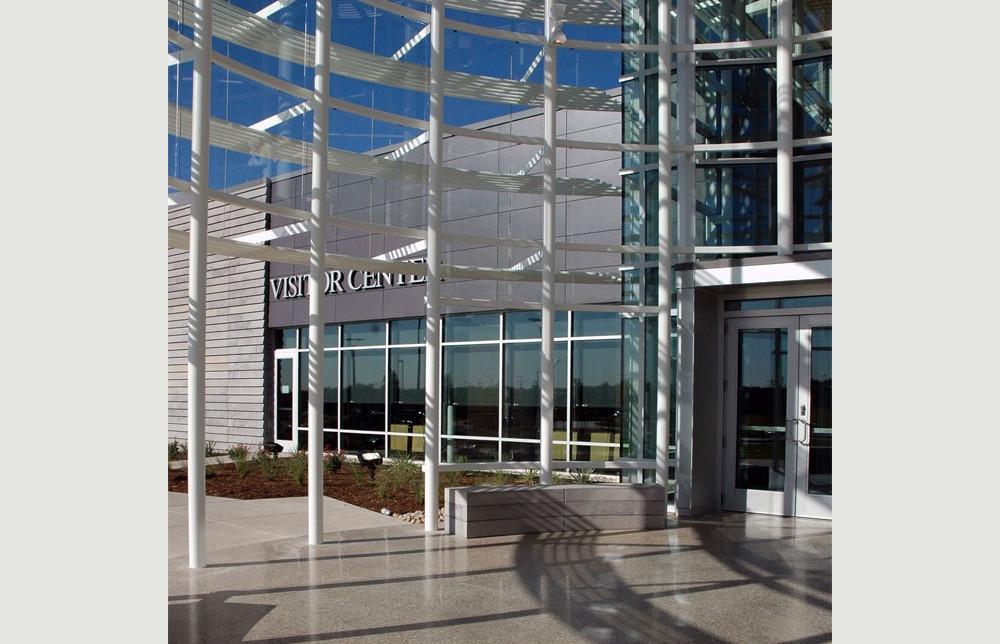 This project is part of a larger recent effort by UT Dallas to create a more welcoming front door approach and to establish a stronger identity for a campus that has often been characterized as bland and nondescript. The building is intended to work closely with recently completed landscape improvements designed by Peter Walker Partners to create a new gateway and orientation point for the campus.

A long, thickly landscaped approach drive terminates visually on the site for the building, located just west of a large circular mound that is the landmark for the campus entry. An iconic circular tower in the building echoes the circle in the landscape as well as reflecting the rotunda of the existing School of Management on the opposite side of the campus entry.

The circular tower is an open, unconditioned space for informal gathering and acts as a welcoming gesture both for the campus and the building. The towers stack ventilationcontrolled by curved glass containment, its concentric rings of sunshades and its huge fan will help keep it temperate in the hot Texas climate. Finely detailed steel tension members keep it light and delicate like the best of traditional Texas porches.

The mottle in the limestone reveals geological origins and displays the often under appreciated range of Texas building stone as well as the variations in the states geology. The explicit structure and precise detailing of the steel work employ a very different expression of materiality and assembly. Both architectural gestures speak to UT Dallas strengths as an institution with great interests in science and technology and to students whose curiosities and powers of observation lean in these directions.

Functions accommodated in the building include retail enterprises such as the bookstore, tech store, cafe and copy shop as well as an ample recreation/multipurpose room dedicated to student activities. A large visitors center serves as the primary greeting and orientation point for prospective students, families and others coming to the campus from outside the university community.

Because the building sits in a position on the campus where many people pass through on their way from parking to the main mall, a long concourse with generous clerestory light has been created to celebrate that movement. Entries to all major functions open off the concourse and are marked by strong color that contrasts with the black/white/grey palette of the rest of the building. Steel struts act as structural bracing, dancing irregularly across the tall space and emphasizing its role as a place for circulation.

Large scale campus events ranging from chess tournaments to recognition ceremonies to the main reception following graduation will be held in the open indoor/outdoor room that flanks the north side of the concourse. Linked as well to the adjacent recreational sports center, this large informal space can accommodate up to 2000 people and provides a much needed nexus for a campus that does not have other gathering spaces like a stadium or concert hall.

Both in terms of its functions and its key location the new Visitor Center and University Bookstore plays a transformative role on the UT Dallas campus. It creates a fresh new image for the campus in concert with the Peter Walker landscape plan, and it provides much needed spaces for enhanced student life.

To aid with the ventilation within the rotunda, a 20-foot diameter PowerfoilX fan from the Big Ass Fan Company was installed. Unlike small, high velocity fans, Big Ass Fans circulate a large volume of air providing the necessary cooling to make occupants feel up to 10 F cooler, offering the evaporative cooling effect required for comfort. Considering the nature of the space, quiet operation was imperative. Onboard controls have eliminated excessive distance between the motor and the variable speed drive VSD, thus significantly reducing any audible noise caused by output transistor switching on other fan systems.

Effective air movement doesnt occur simply through fan rotation alone. The type of blades or airfoils and the angle at which the airfoils are placed play an important role. With 10 moderately pitched aerodynamic airfoils, efficient air movement is achieved without incurring excessive drag, allowing for a much smaller, energy-efficient motor. To further enhance the efficiency of the airfoils, winglets are added at the tips to help eliminate wing-tip vortices that can induce drag and lower overall efficiency of the airfoils. Along with providing comfort within the space, Lindsey Brigati, AIA with Page Southerland Page LLP, says its also a means to draw your eye and to draw movement into the building, adding to the overall ambiance of the rotunda.