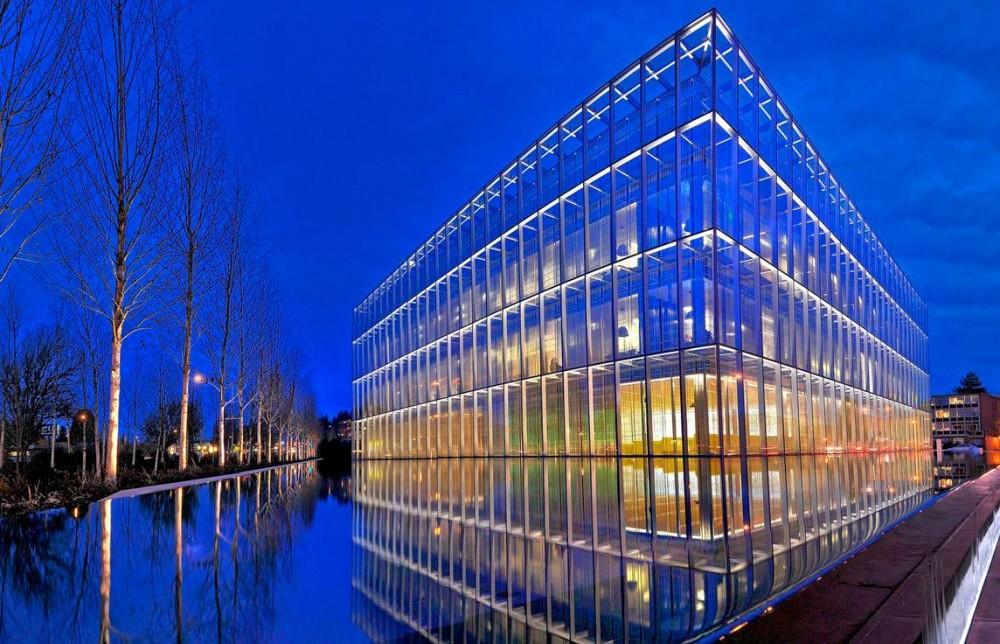 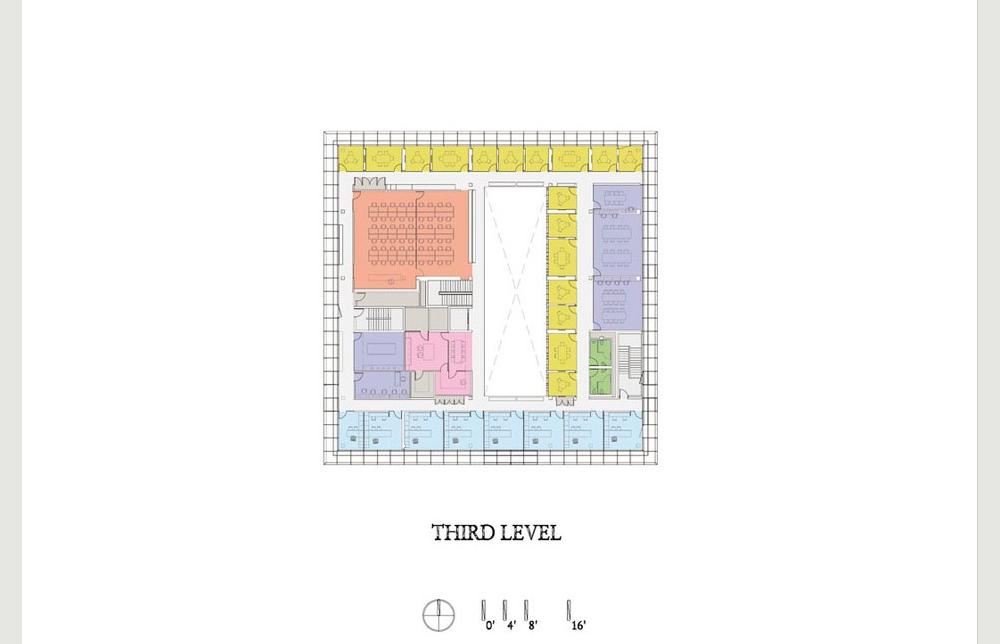 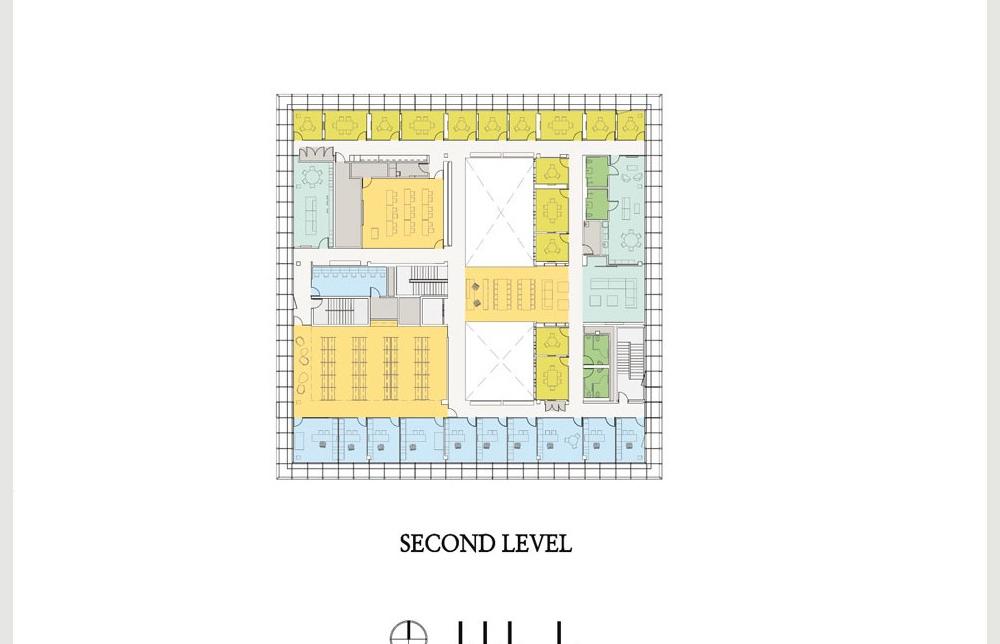 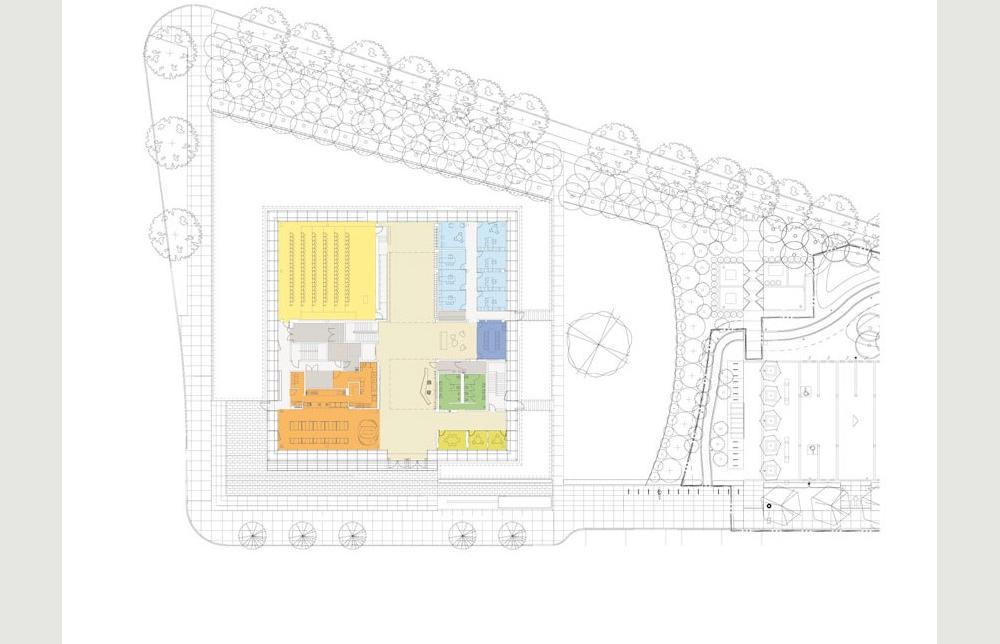 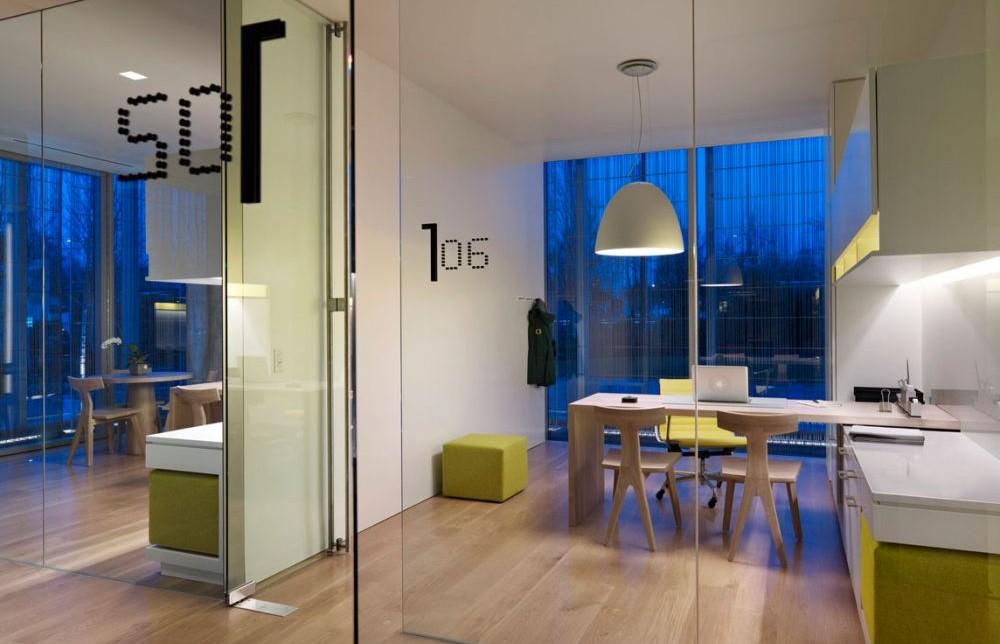 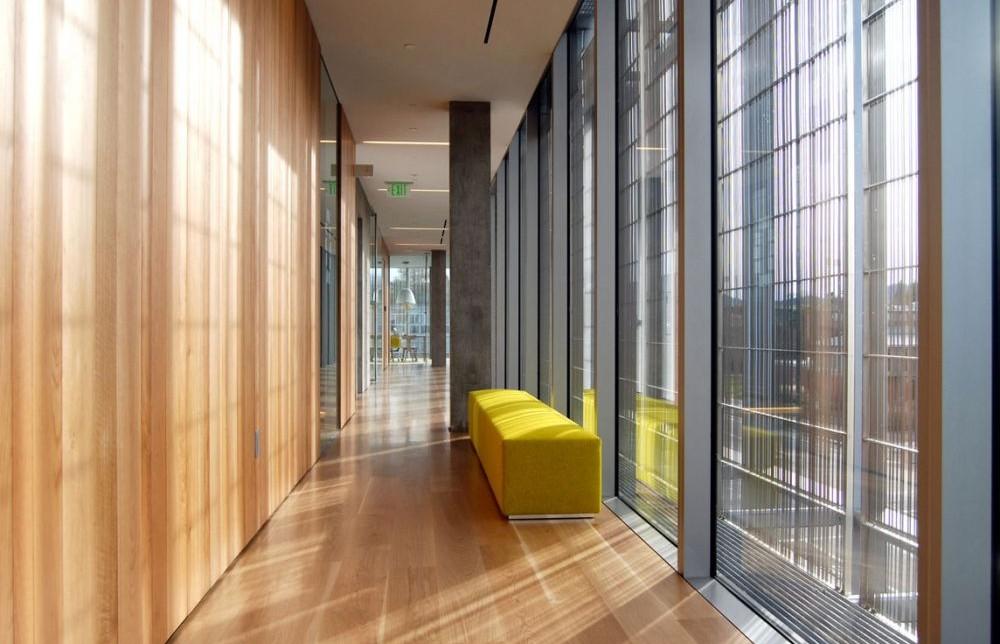 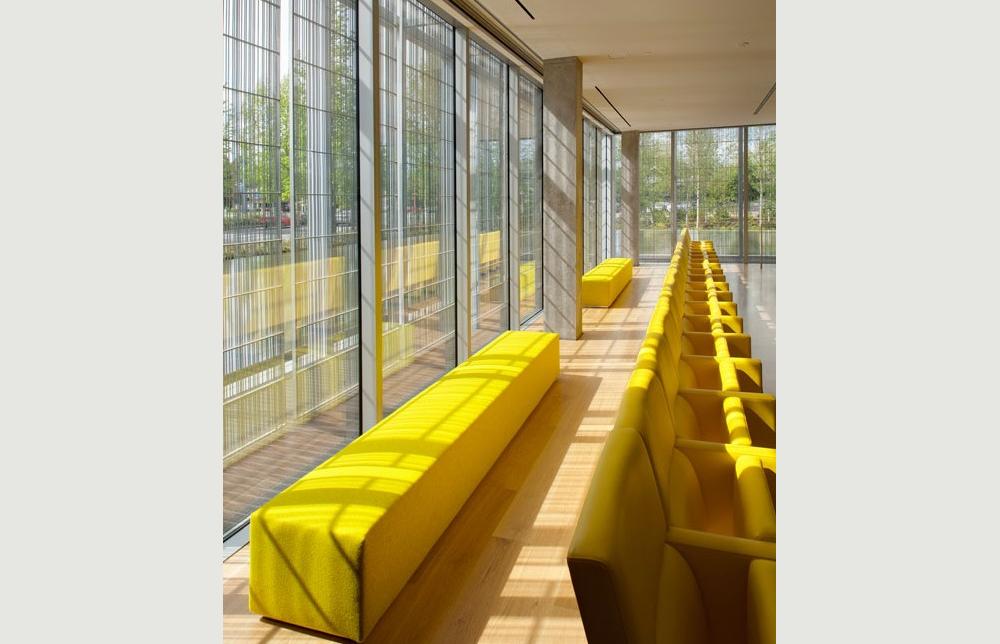 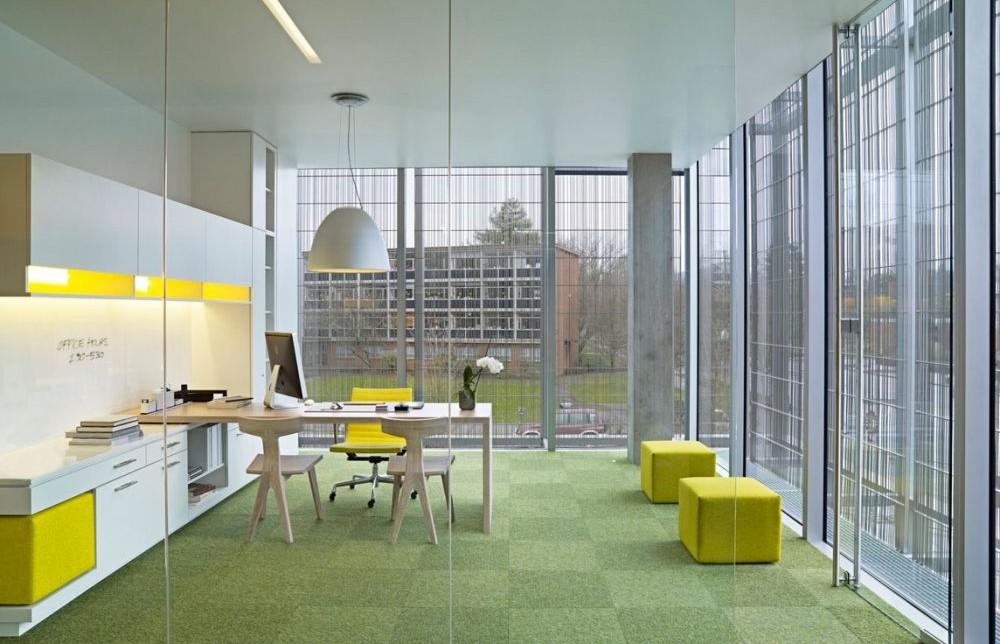 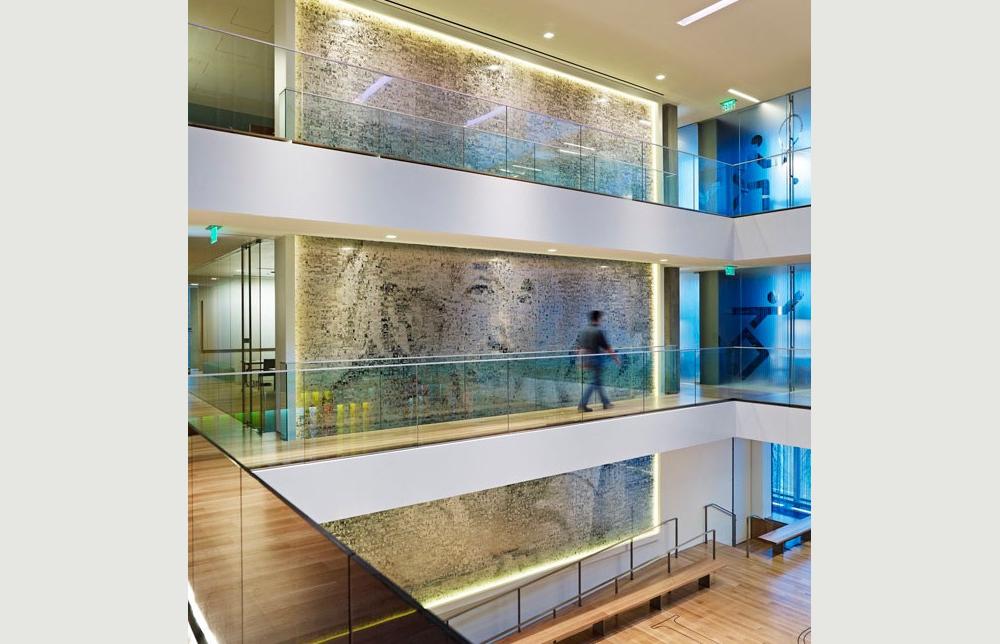 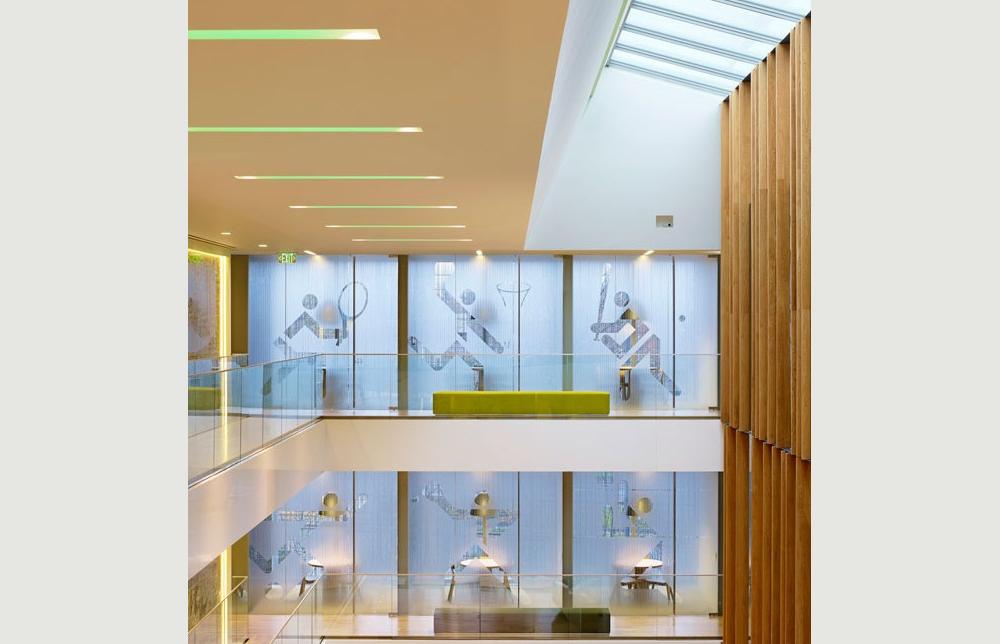 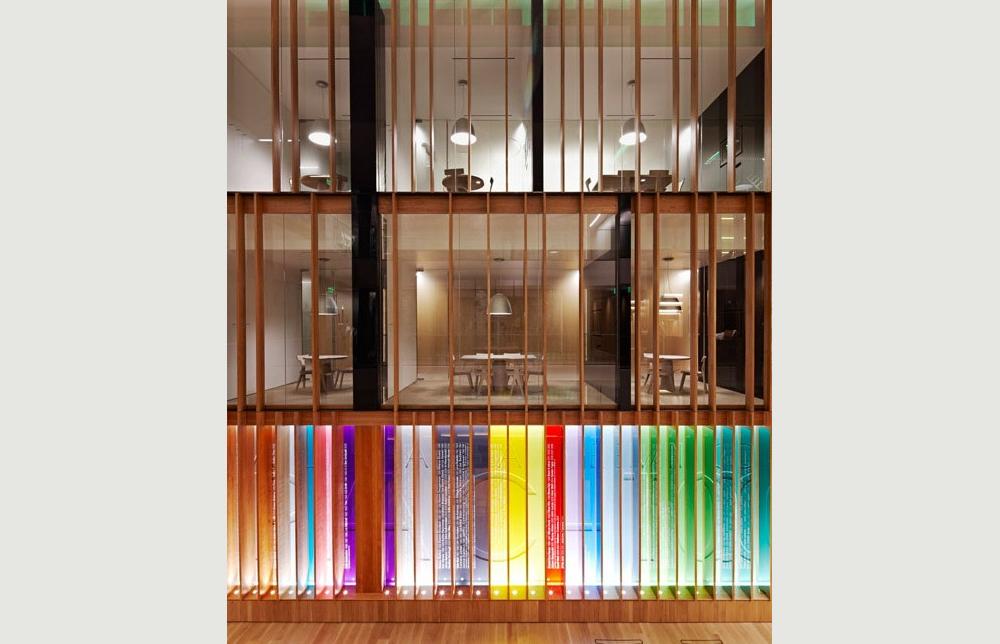 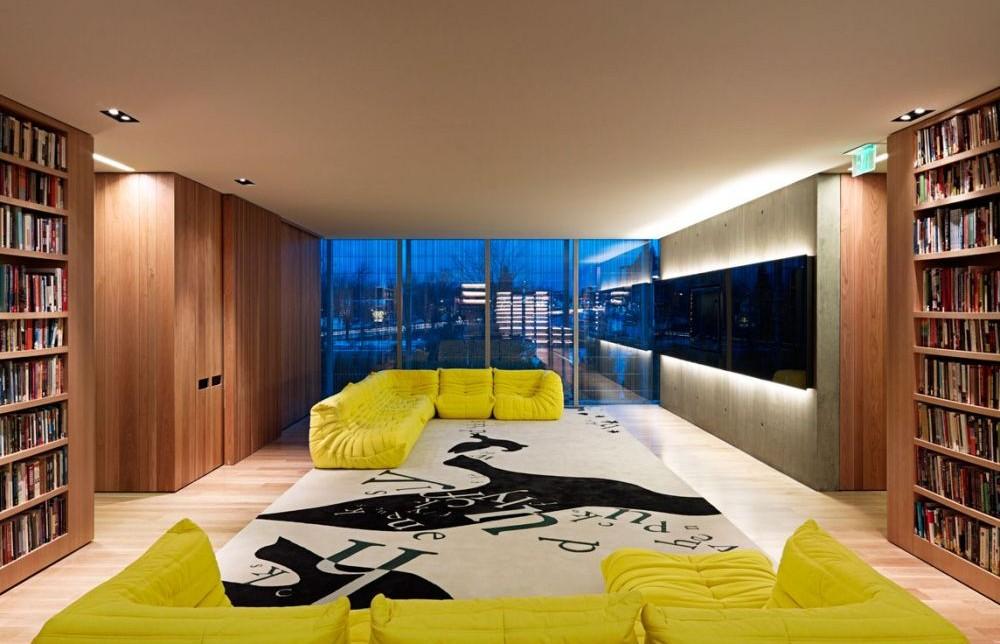 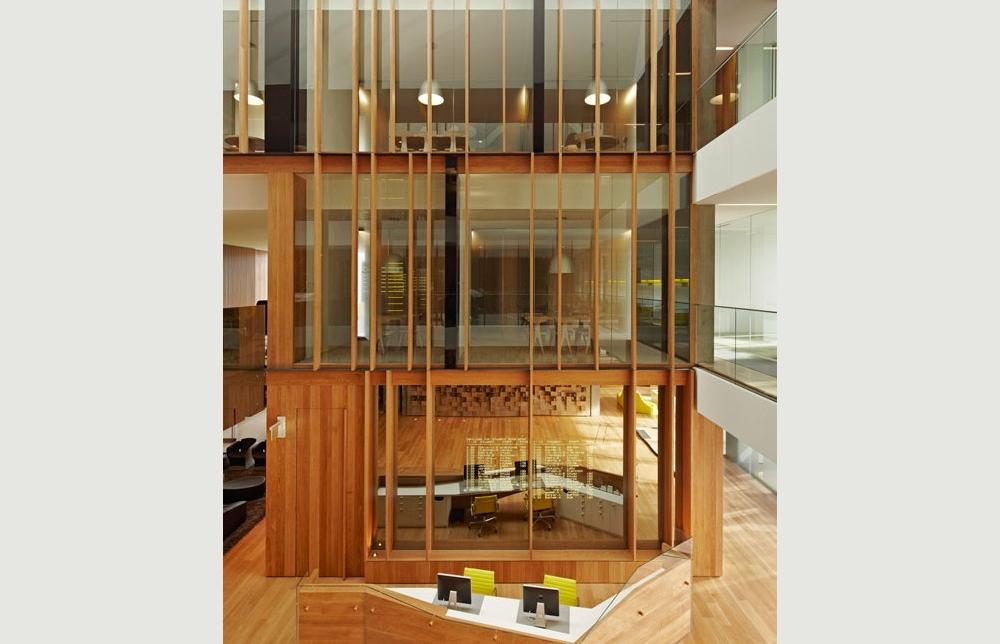 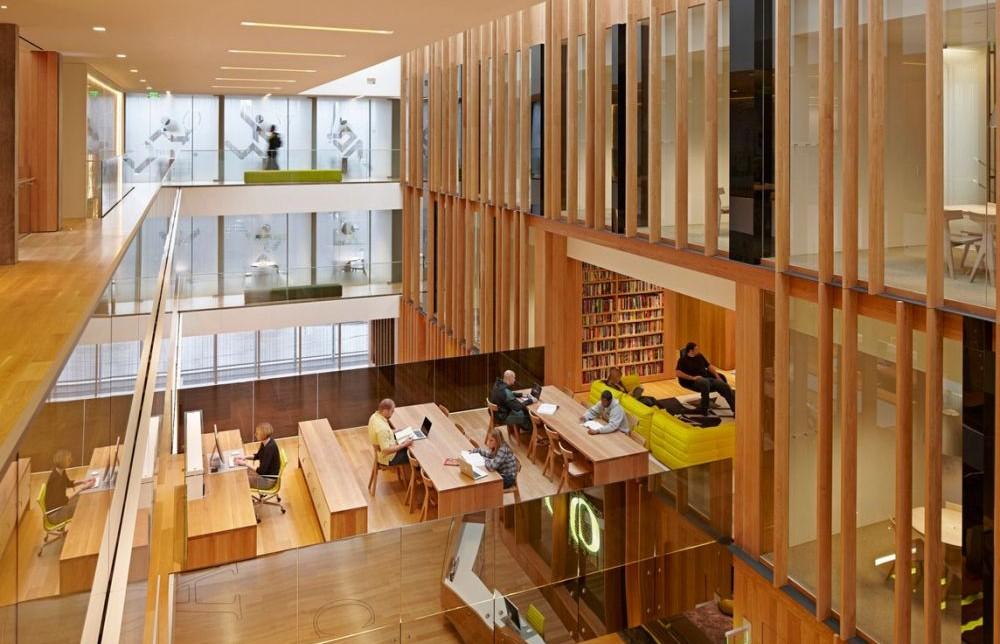 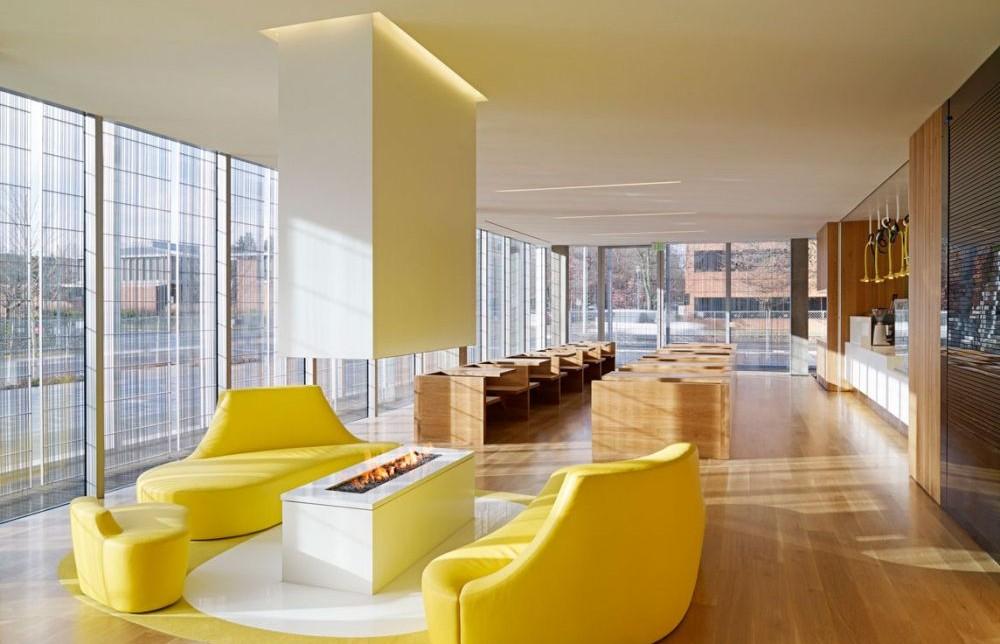 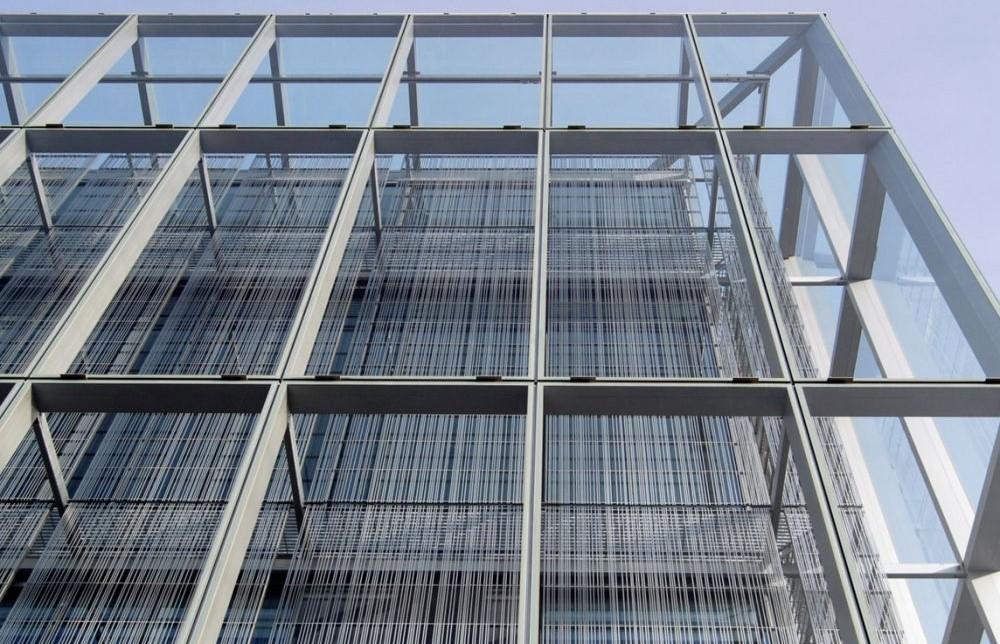 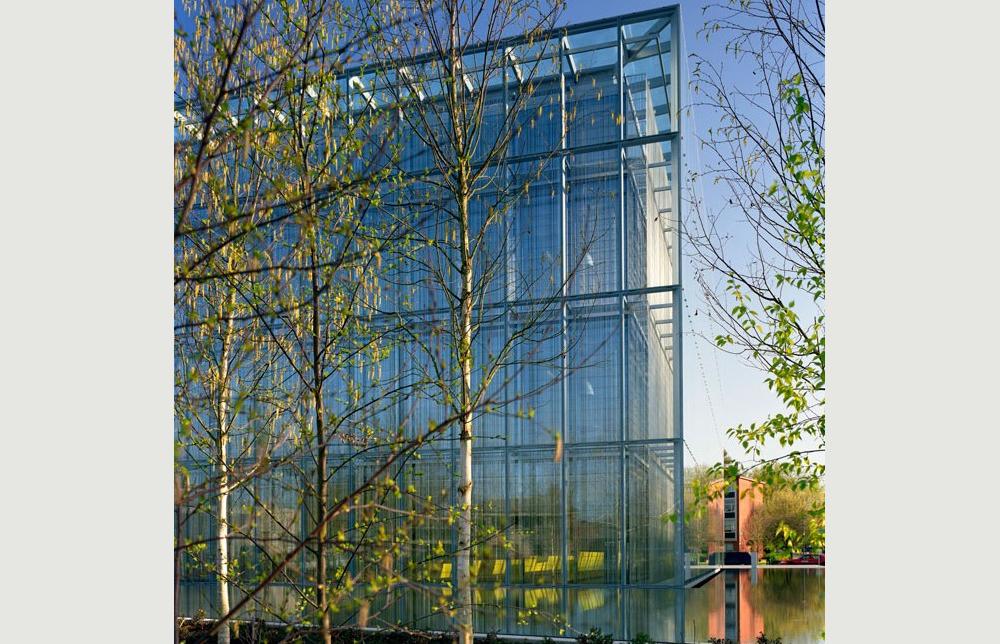 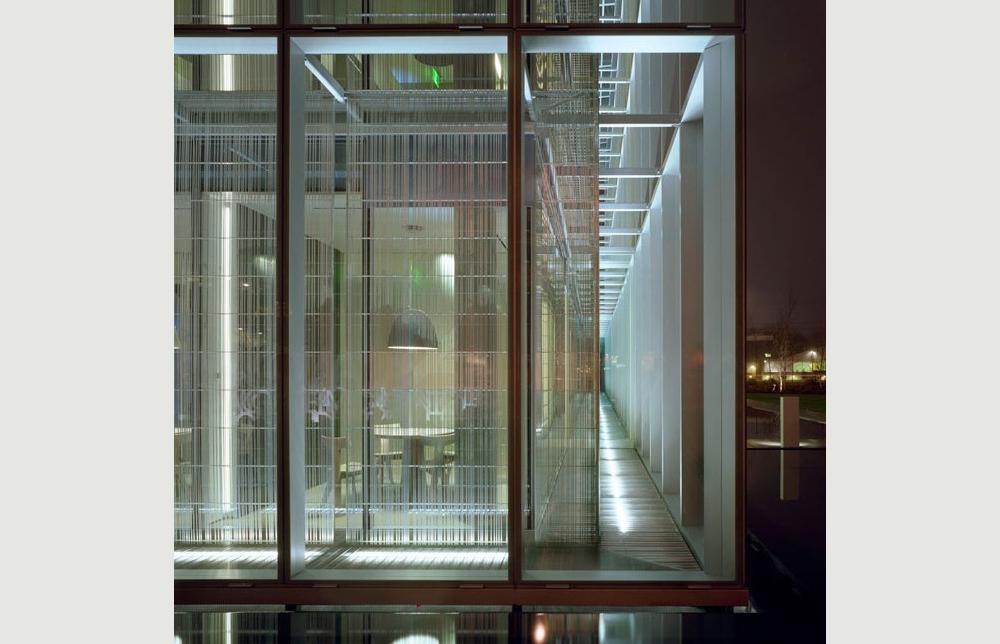 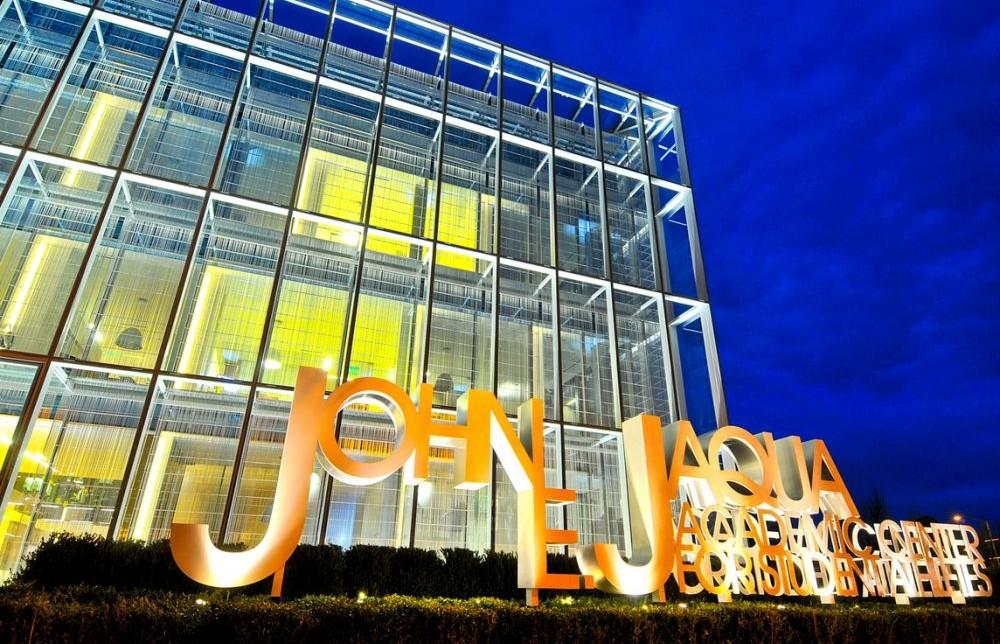 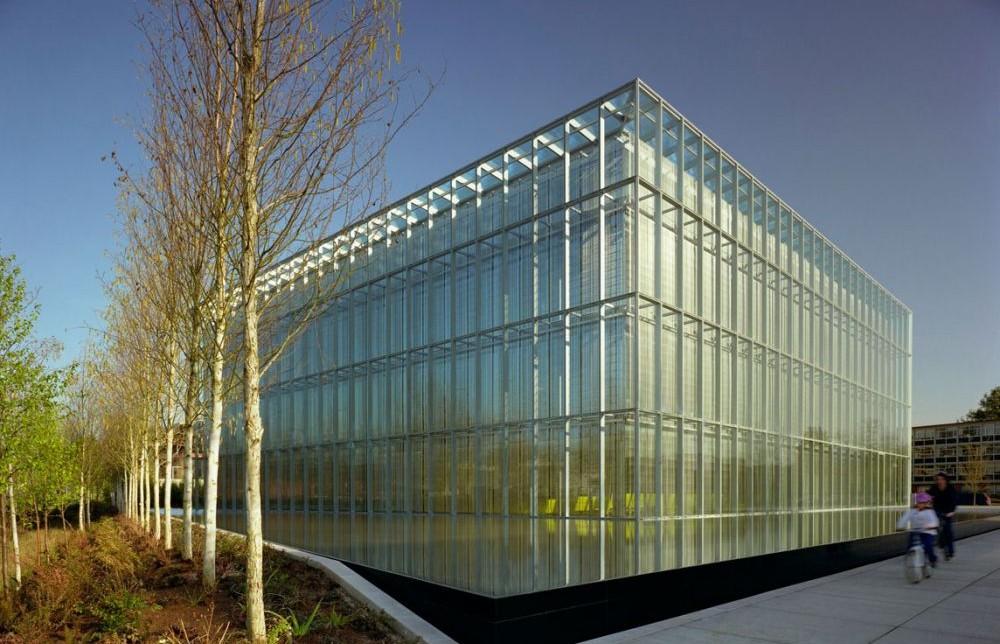 The John E. Jaqua Center for Student Athletes at the University of Oregon explores the limits of transparency and connectivity to provide the UOs student-athletes a place to gather as a community focused on study and learning. The challenge of creating a tranquil environment where students feel connected to natural landscape elements and daylight was heightened by the chosen location: a busy intersection between campus and the city of Eugene, on the site of a former parking lot at one of the major campus entrances. The sites visual prominence led to the building designed with four public facades and no back door, which has reinforced its importance within the landscape as an iconic element.

Program
The new 40,000 SF academic learning center is a state-of-the-art facility that contributes the recruitment, retention and success of Oregons 520 student athletes.

The first floor of the building is open to the public with a caf, auditorium, an atrium for public events, and heritage space that recognizes past, present and future student athletes at the University. The first floor also includes staff offices and shared tutor areas for student-athlete/general student body group sessions. The two floors above are for the exclusive use of Oregons student-athletes and staff and require secure access. The facility includes a 114-seat auditorium, 35 tutor rooms, 25 faculty/advising offices, conference room, flexible classroom, computer lab with 54 computer stations, graphics lab, 3D teaching labs, library, separate lounges for students, tutors and staff, and 40 study carrels configured to accommodate two student-athletes per carrel, enough for all freshmen. The site also includes 34 metered parking spots for building visitors, with LED lighting and white parking stripes, formatted like the yard lines on a football field.

Design Concept
The notion of a fertile, natural environment to invigorate and inspire learning was the premise on which the design concept was based. The glass structure rests on a table of water and a birch forest celebrates the regions natural environment. A double wall facade addresses acoustic isolation, thermal insulation, and control of available daylight within the building. The walls consist of five elements that create a dynamic response to orientation while reinforcing the concepts of transparency and connectivity. A prismatic, vertical stainless steel screen within this facade provides shading, thermal comfort, and ability for heat harvesting as well as visual privacy for the inhabitants. The glazed facade and interior spaces are composed on a rigorous module to achieve an uninterrupted visual connection between internal rooms and the larger garden beyond. The reflectivity of the glass and water obscure the boundary between the building and surrounding landscape.

Interior
Authenticity to the Oregon student experience was a key design driver, as was the celebration of the success of student-athletes in the pursuit of knowledge and athletic achievement. An atrium forms the heart of the building. The atrium walls are infused with graphic displays that relay the Universitys athletic heritage. A scoreboard-inspired wall lists upcoming tutorial appointments for student-athletes.

Through the seamless integration of art, environmental graphics and architecture, the facility serves as a pantheon of student athletic achievements. For example, the A Few Who Just Did It wall celebrates the post-graduate academic achievements of notable former student-athletes, including the faces of author Ken Kesey, Nike co-founder Phil Knight and Ann Bancroft the first woman to cross both the North and South Poles, engraved in 8×8 square oak blocks. A three-story mural constructed of 10,000 small 3×3 photos of student-athletes is acid-etched onto stainless steel and assembled in a large-scale pixilated pattern such that Albert Einsteins face emerges when viewed from a distance.

Discovery is a big part of the experience for building users and visitors. For example, the tile pattern in the mens and womens restrooms on the ground floor is the visual representation of the sound wave file from the Oregon Ducks football public address announcer who starts every football game with It never rains in Autzen Stadium. The floor in the elevator is engraved with Oregon slogans like I love my ducks! and the leather handrail in the elevator has the words to the Oregon fight song.

The building itself serves as a symbolic bridge, recognizing teachers in the classroom and on the field. From the academic scholars featured in the auditorium to the head coaches, whose names and years of service are milled into the surface of the air intake grate on the south entrance of the building to the distinguished faculty recognized on a water-jet cut aluminum screen on the auditoriums south wall. In this way, the facility becomes the connective tissue for the student-athlete.

A student lounge area on the second floor is set on axis with the Katsura Maple tree in the garden below. This axial move was carefully planned in order to provide a sense of being at the tree top while in the space. Several beanbag-like sofas are arranged throughout the room offering student respite. A custom rug covers the floor with a large supergraphic of a traditional University slogan used as part of its rivalry with the Oregon State Beavers, When ducks fly beavers., with an image of several ducks flying through the air and a beaver scurrying away. Walls are covered in white oak and a TV is placed within a band of black glass that makes a graphic stripe along one edge of the room.

Building Performance
The University of Oregon John E. Jaqua Academic Center for Student Athletes employs a double-wall ventilated faade system. It acts to reduce heat gain into the building through several heat exchange processes that occur within the depth of the skin. An extensive simulation effort was made to characterize and predict the performance of the building through a whole building analysis per State of Oregon SEED guidelines. Due to the innovative approach, conservative translations of shading coefficients and u values were necessary to provide a comparative analysis against a conventional building. The model predicted that the building would exceed then-current Oregon Energy Code by 7.73, reducing the Universitys operational costs.