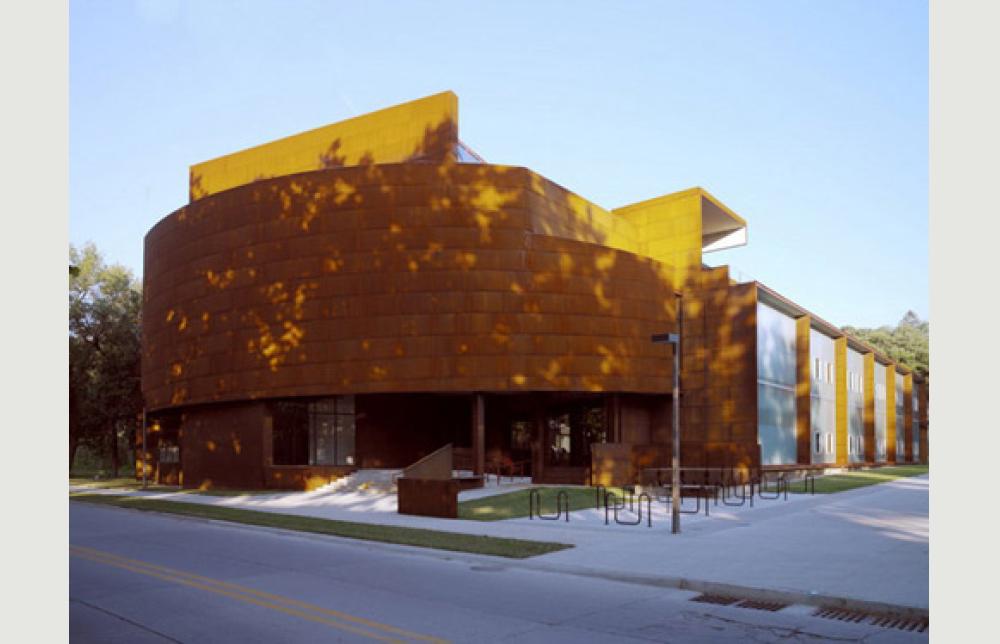 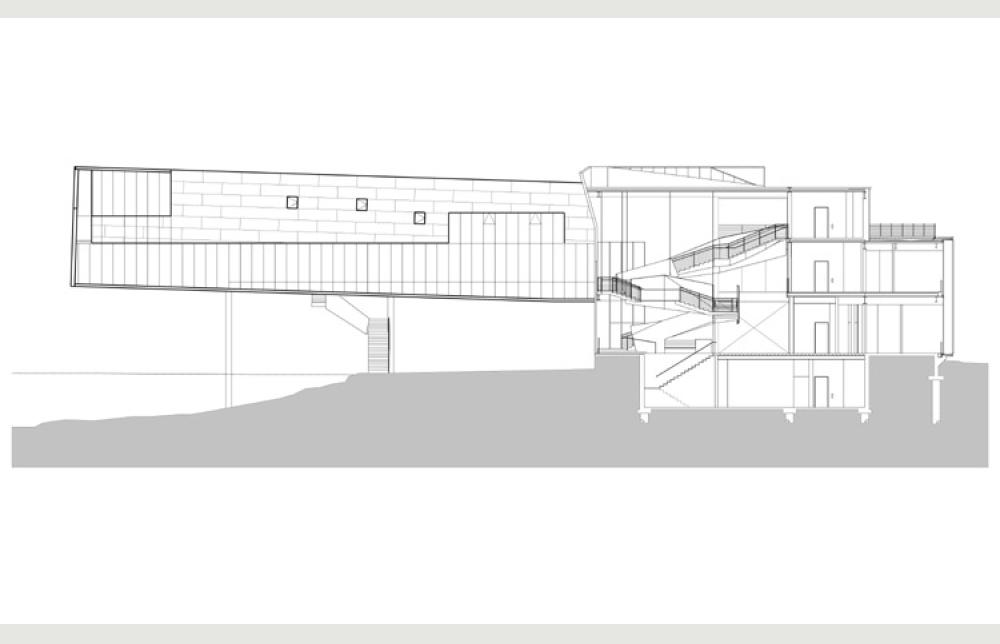 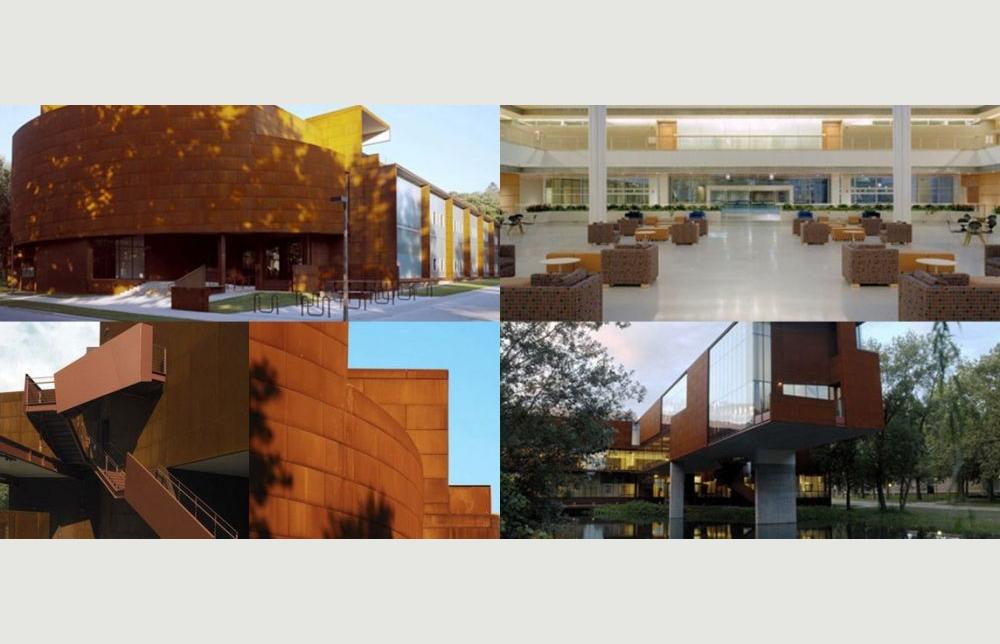 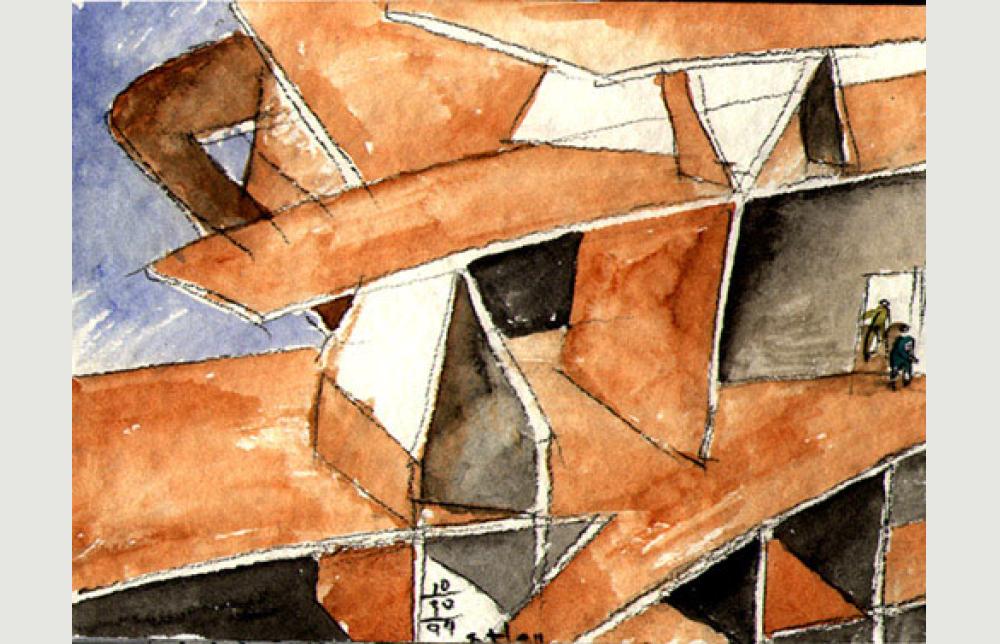 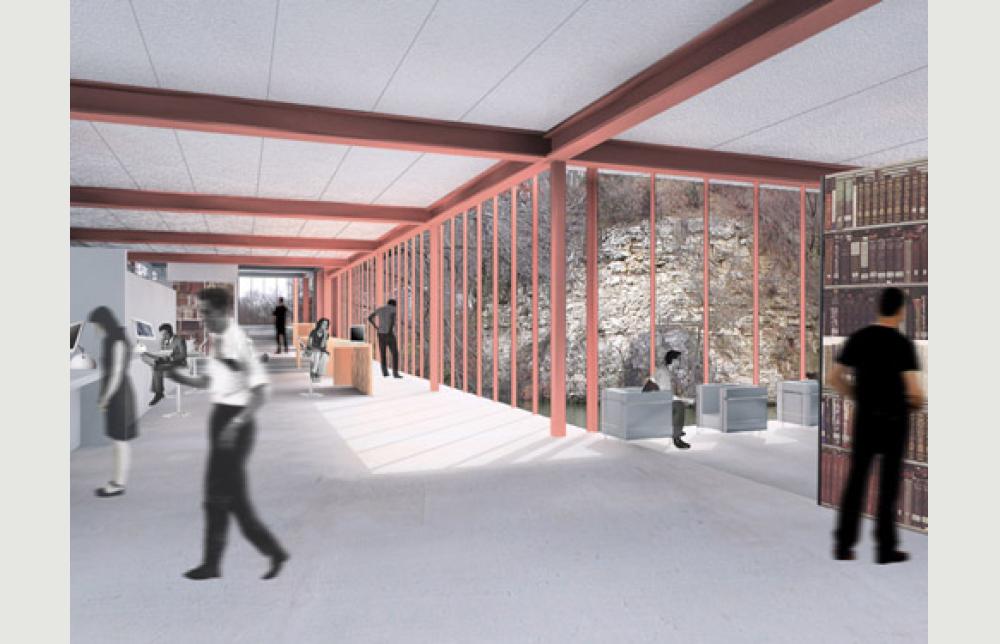 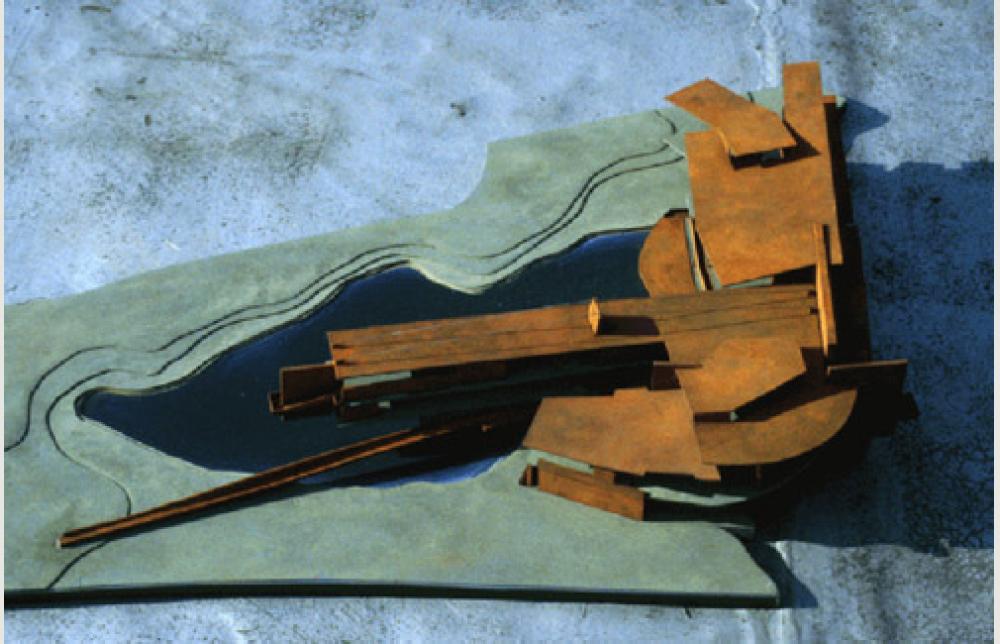 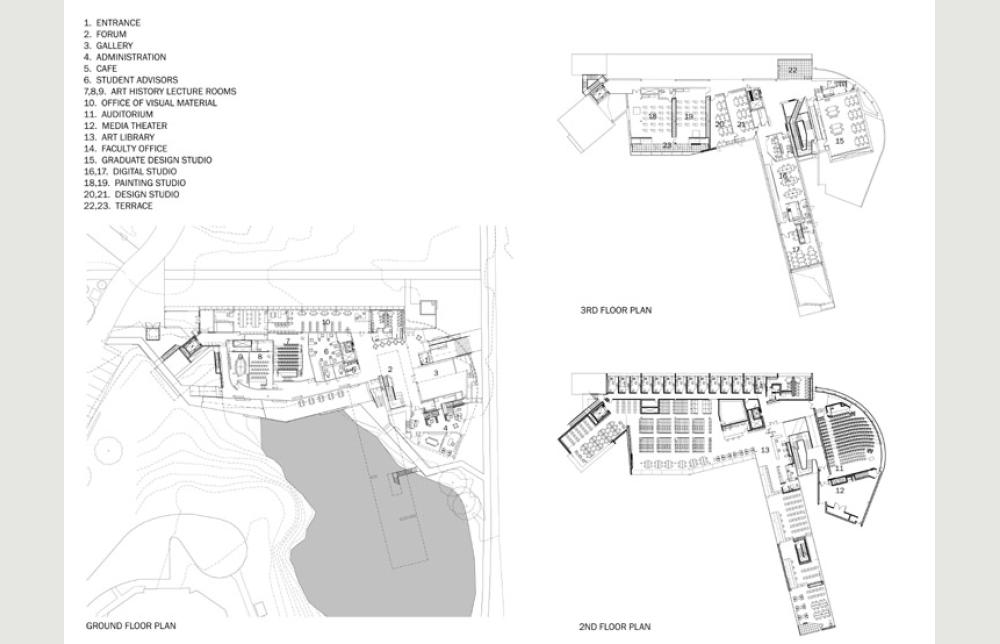 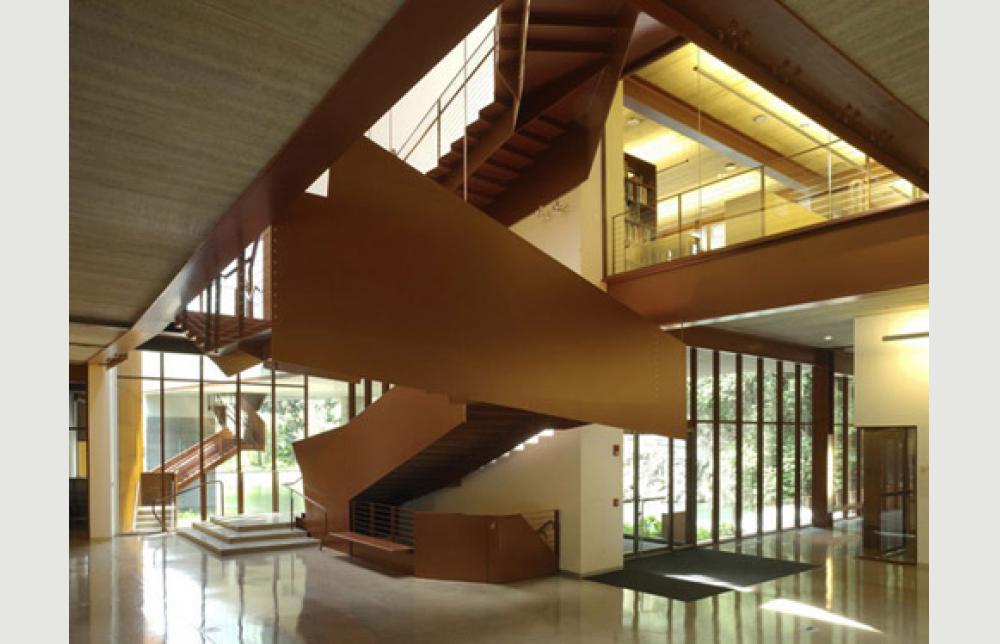 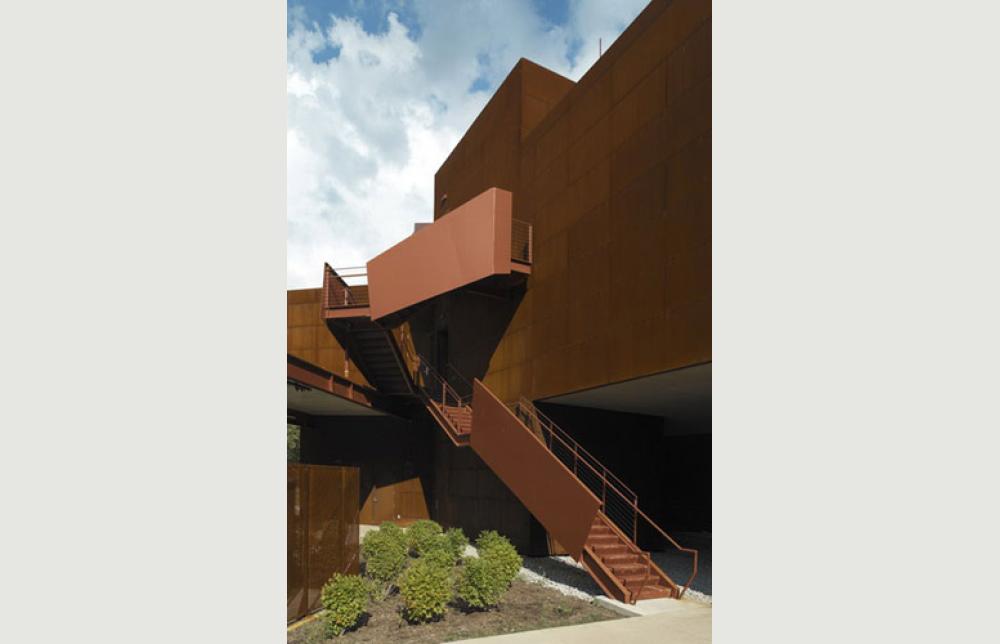 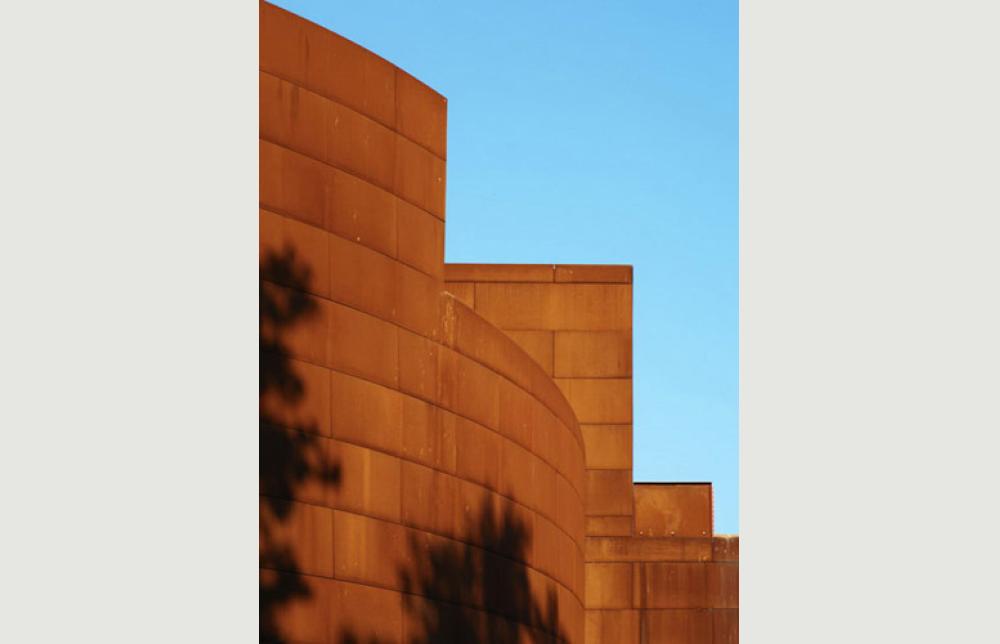 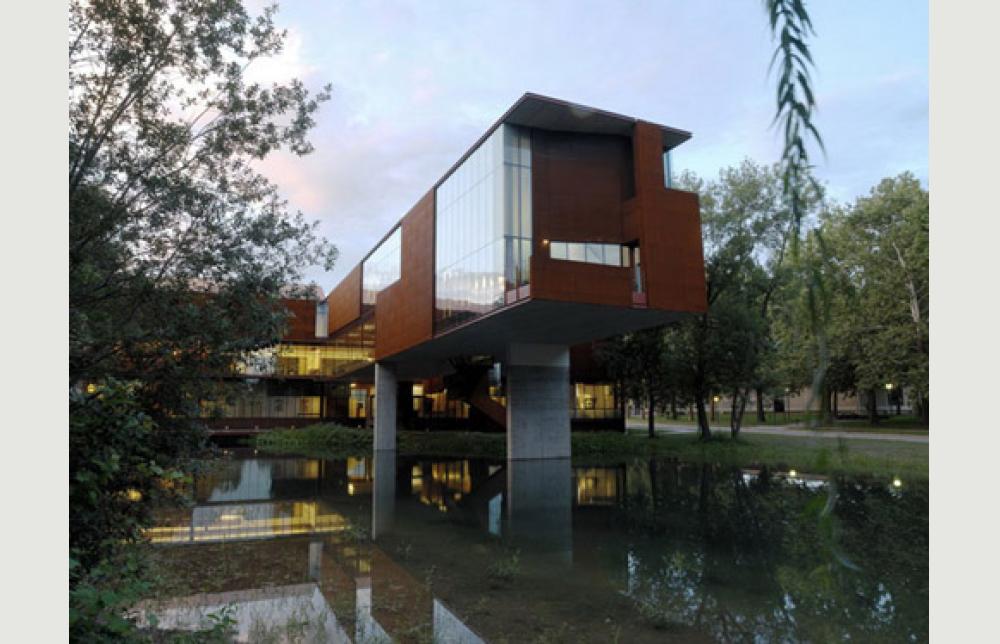 The site presented special conditions: an existing 1937 brick building with a central body and flanking wings located along the Iowa River in addition to two existing morphologies: a lagoon and a connection to the organic geometry of nearby limestone bluffs which form the edge of the Iowa City grid. The new building straddles these two morphologies.
The new School of Art and Art History is a hybrid instrument of open edges and open center; instead of an object, the building is a 147;formless148; instrument. Implied rather than actual volumes are outlined in the disposition of spaces. Flat or curved planes are slotted together or assembled with hinged sections. Flexible spaces open out from studios in warm weather. The main horizontal passages are meeting places with interior glass walls that reveal work-in-progress. The interplay of light is controlled through shading created by the overlapping planar exterior. Exposed tension rods of the partial bridge section contribute to the linear and planar architecture. Interior floors are framed in exposed steel and concrete planks, with integrated air and services distribution in the core voids. The resulting architecture is a hybrid vision of the future, combining bridge and loft spaces, theory with practice and human requirements with scientific principles.
Architecture for an Art School
In FORMLESS: A Users Guide Zone Books 1997 Rosalind Krauss and Yves Alain Bois explore the ideas of “Informe” first undertaken by Georges Bataille. Bypassing the battle between 145;form and content,146; 147;formless148; constitutes a third term outside of the binary thinking which is itself 147;formal.148; Analyses of the work of Jackson Pollock, Cy Twombly, Lucio Fontana, Robert Smithson, and Gordon Matta-Clark, among others, set the framework for understanding avant-garde and modernist art practices. One of Jackson Pollock146;s most important works belongs to the University of Iowa.
The Architecture of the Art School explores “formless” geometries in its disposition of spaces and combinations of routes. A working and flexible teaching instrument, the building connects interior functions in spatial overlap at its center which acts as “social condenser” where ongoing work can be observed. Around the perimeter, spaces overlook, overlap, and engage the surrounding natural landscape. The dispersion and “fuzziness” of the edges is seen as way to embrace natural phenomena such as sunlight reflected off the lagoon water or off newly fallen snow in winter.
Prefabricated steel building principles, the most economical building type in America, are employed throughout the structure and materials. Steel in suspension is highly efficient. Due to its low relative height, interiors gain their character through the composition of exposed steel structure and HVAC. Metal sheets are folded, creating strength while minimizing the amount of material used.
A rich architectural language is achieved through the inventive use and combination of basic elements, such as fluorescent lighting tubes hidden by the bottom flange of steel beams, or the merging of painted ductwork with the steel structure.The red coloring of the new building relates it to the original red brick structure, as does its relatively low landscape-embracing profile. We envisioned a new facility of inspiring interior spaces and natural light working like a formless instrument toward cultural production of past, present and future art. This first-rate art facility firmly positions The University of Iowa at the pinnacle of art and art history education in America.