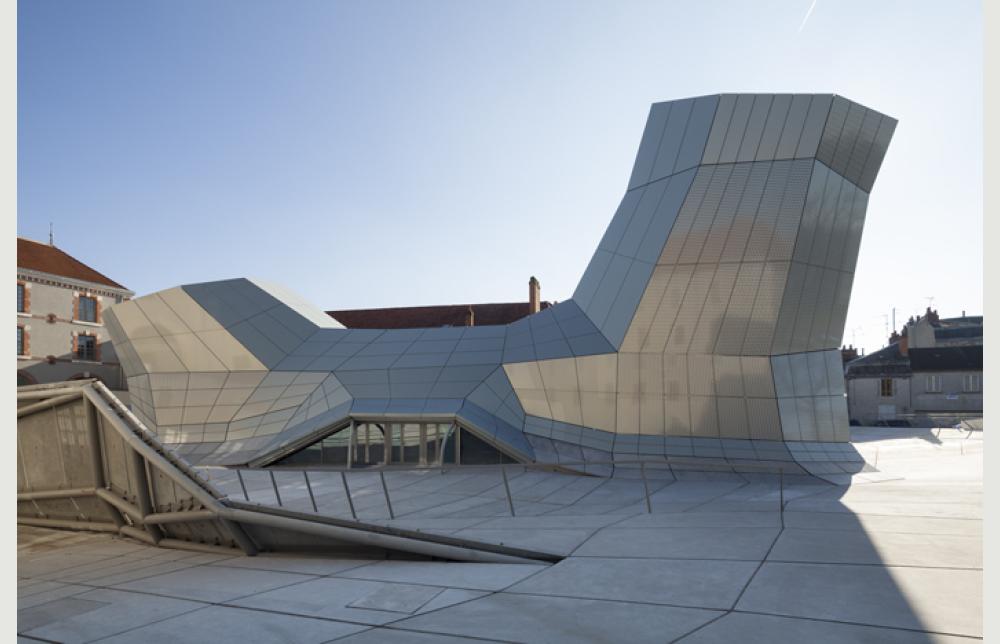 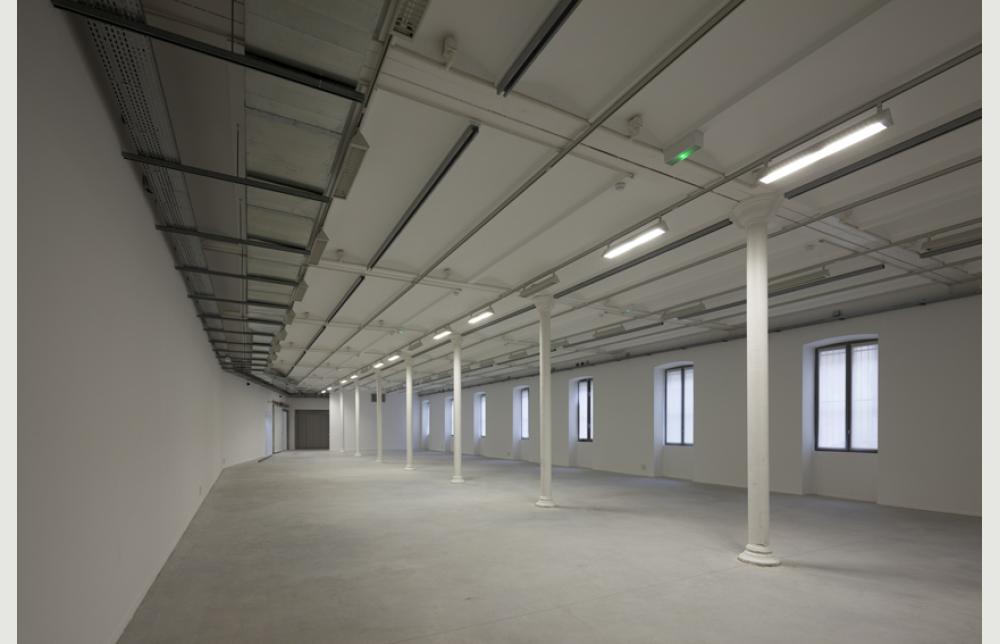 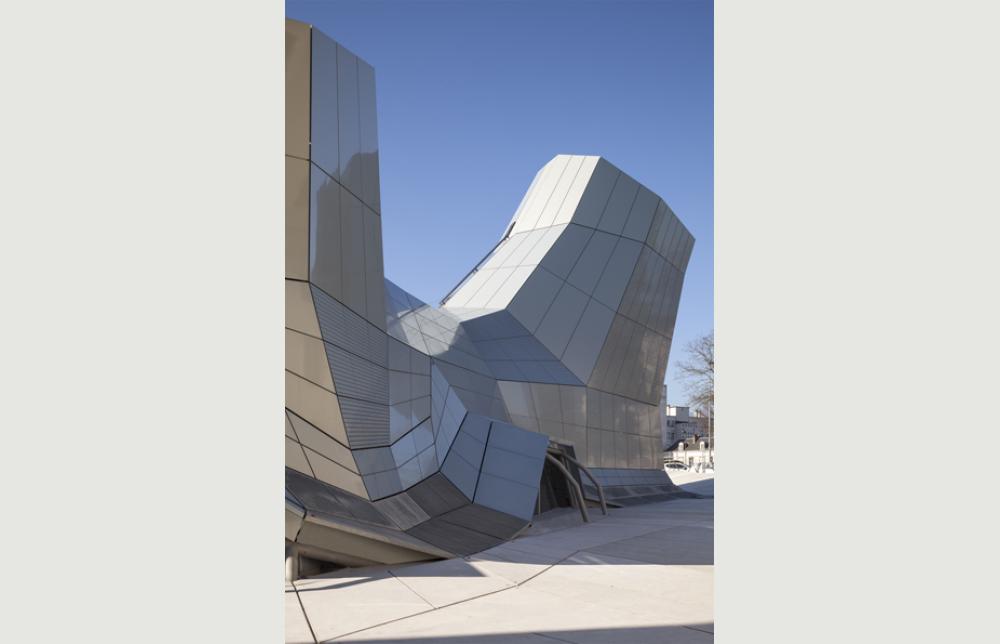 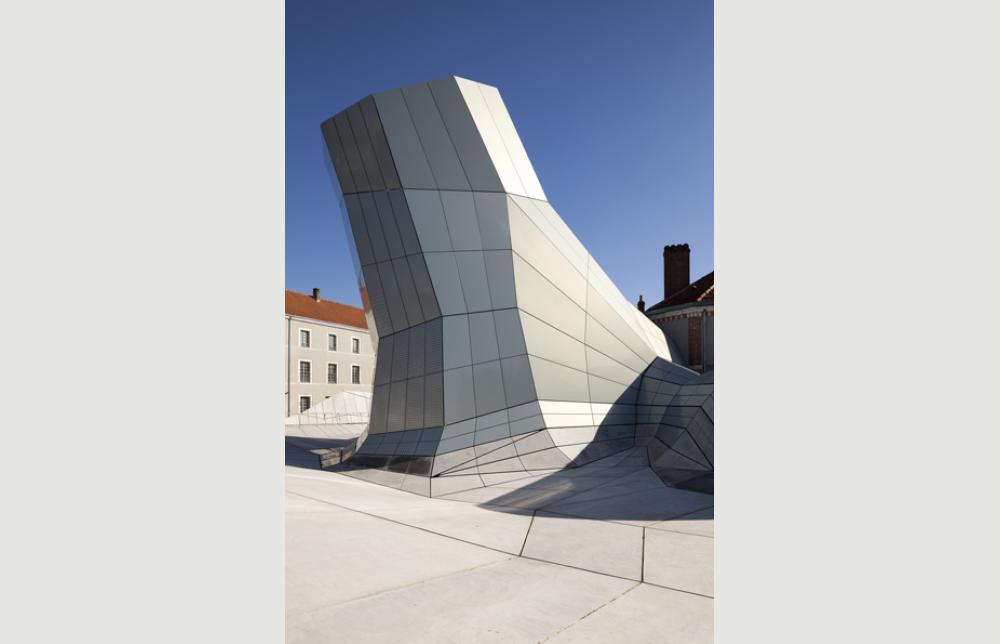 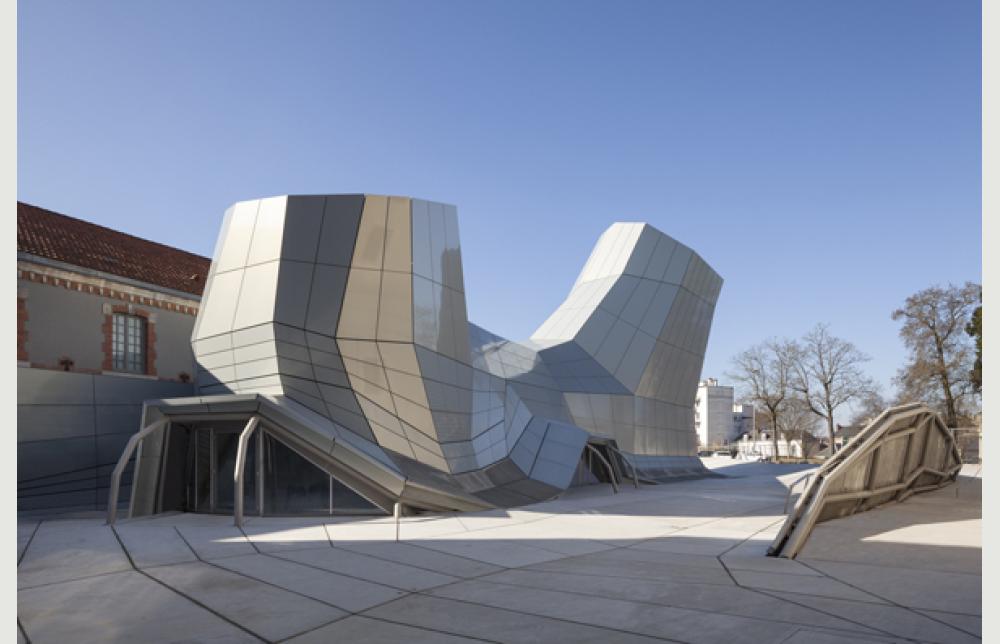 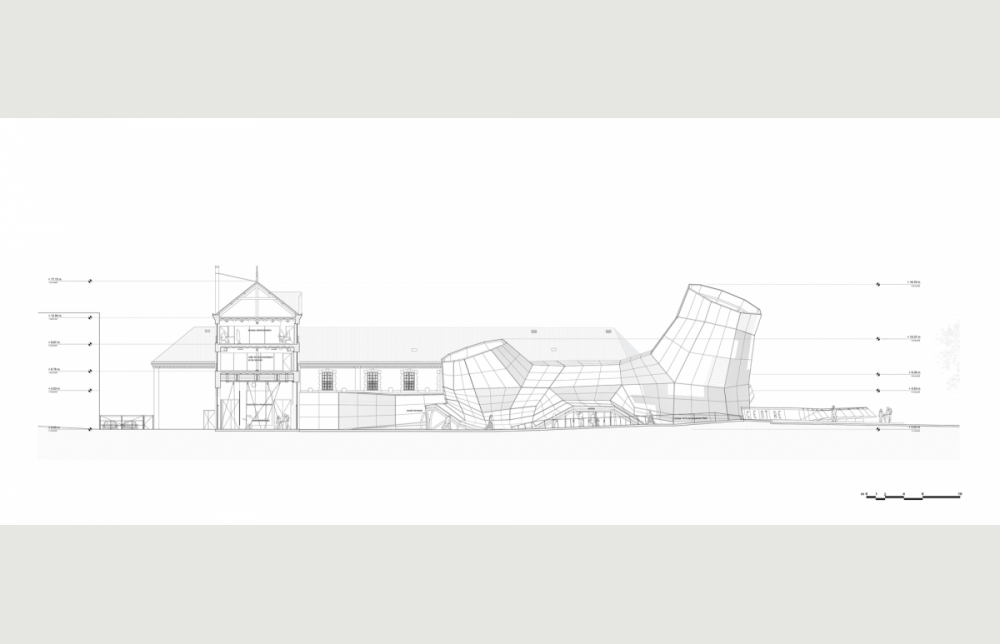 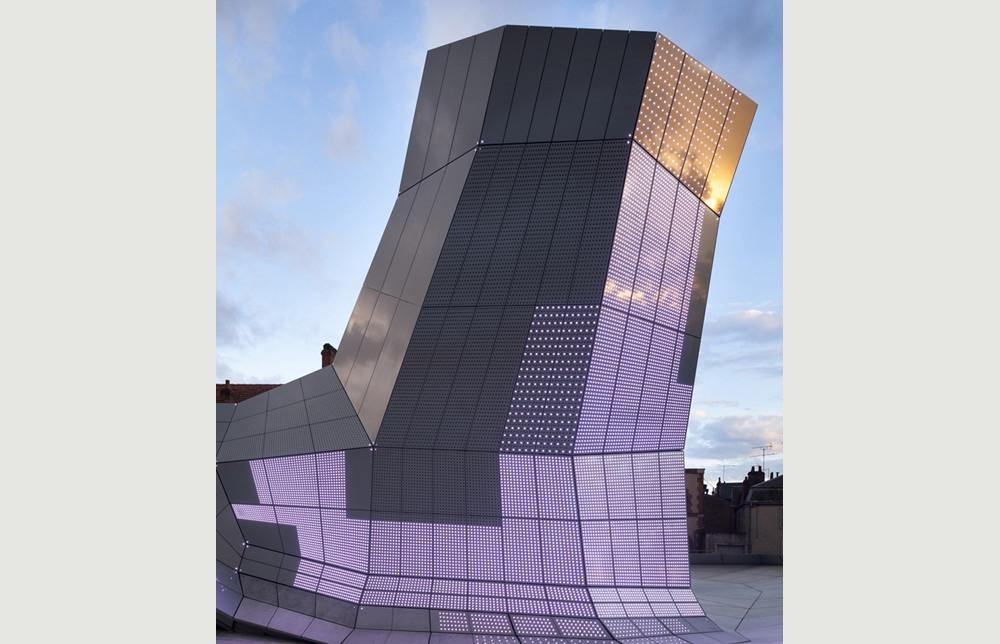 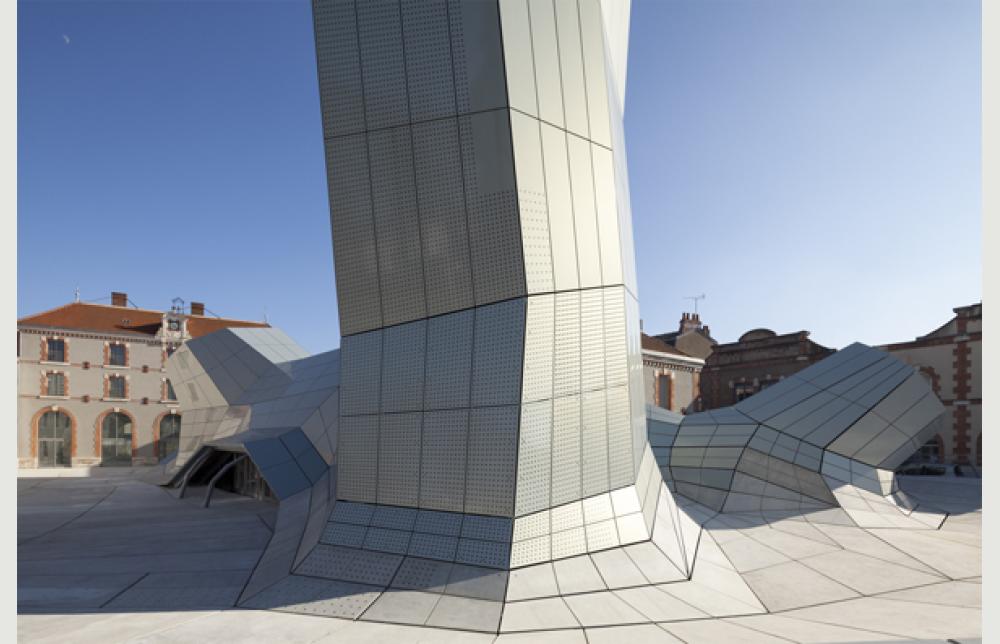 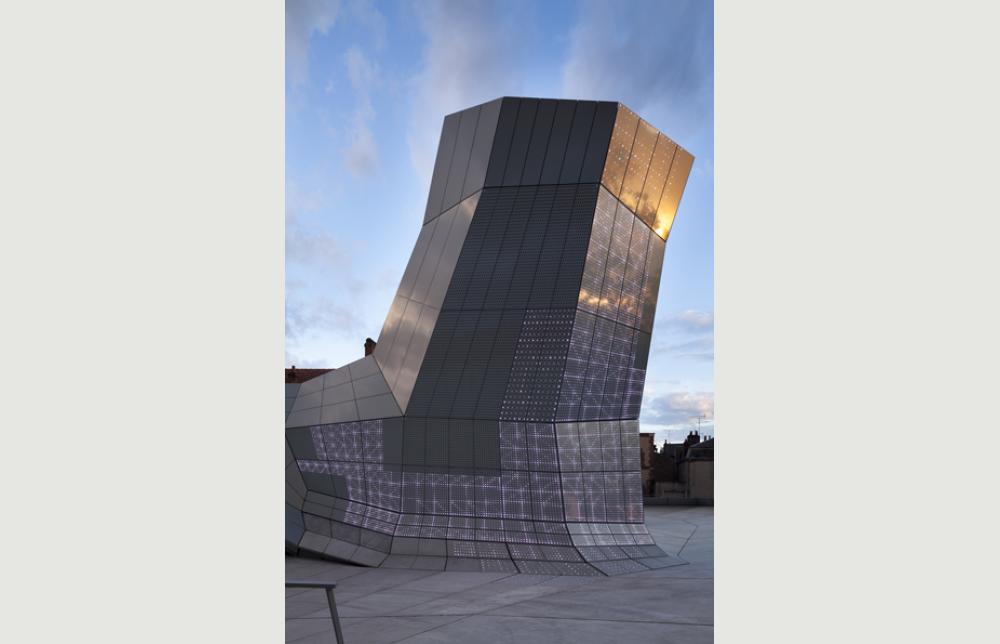 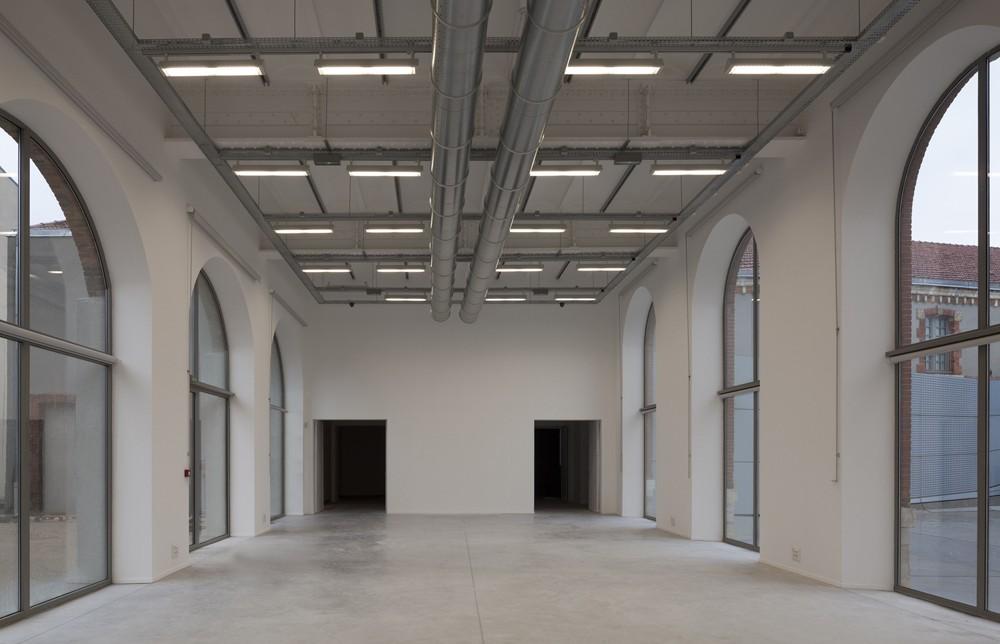 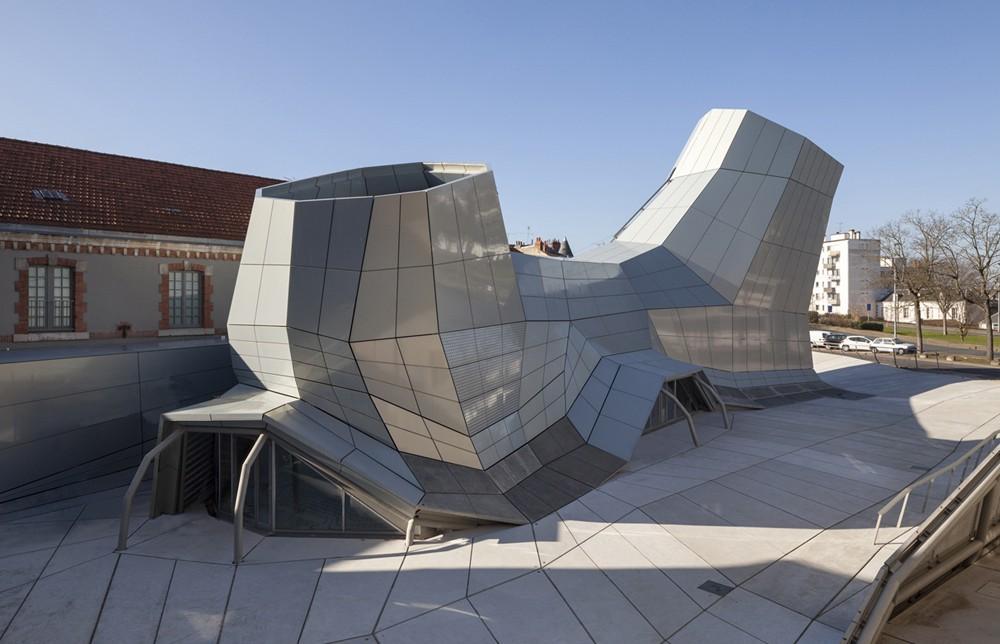 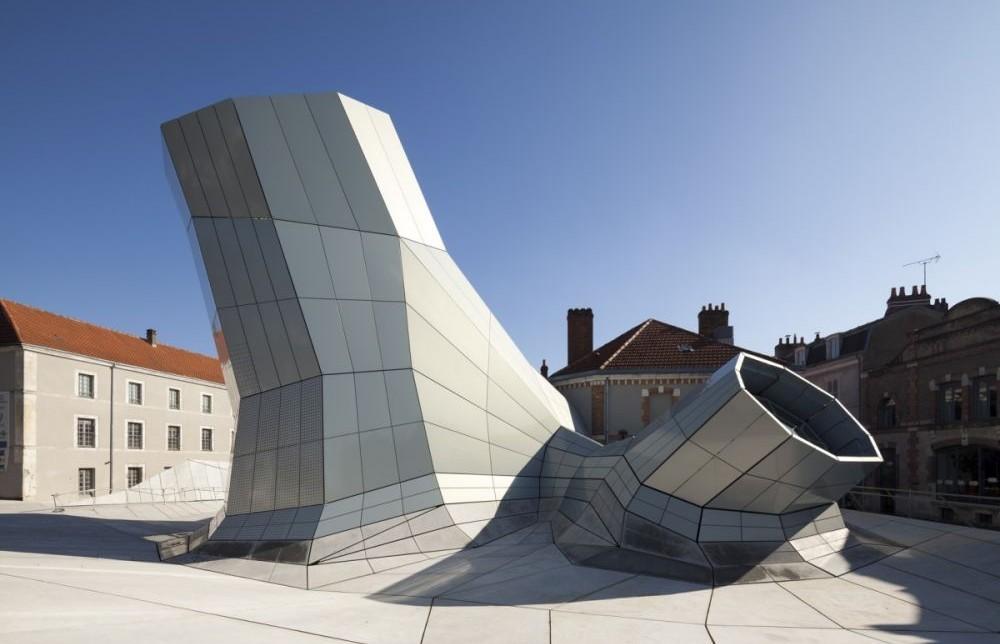 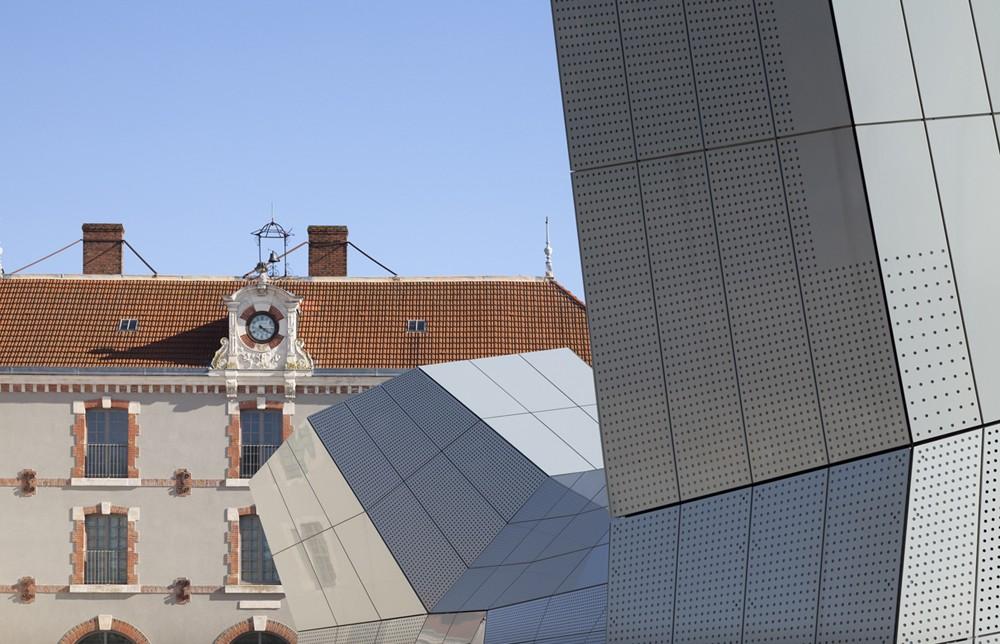 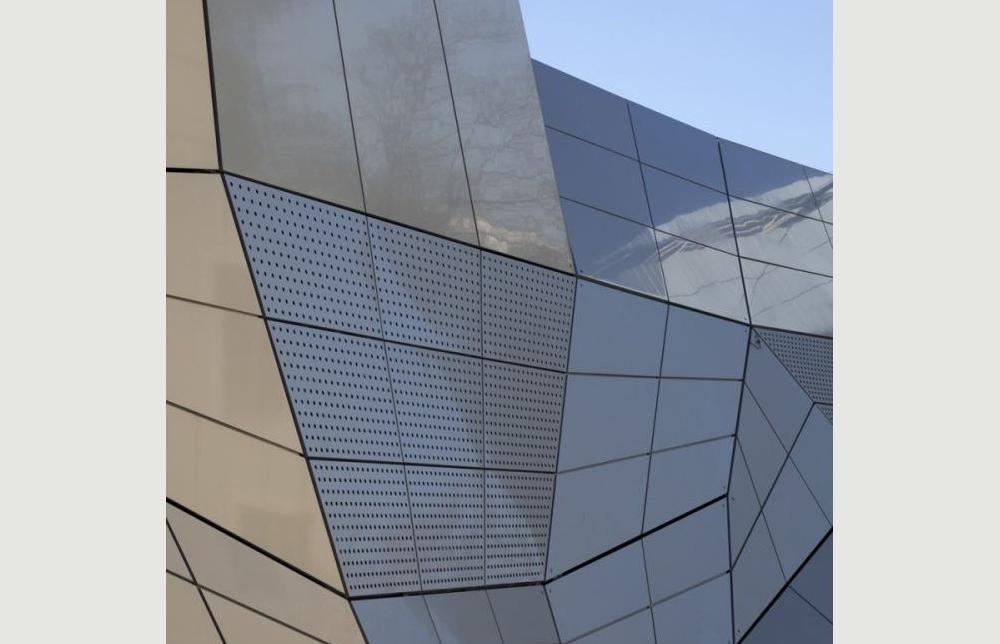 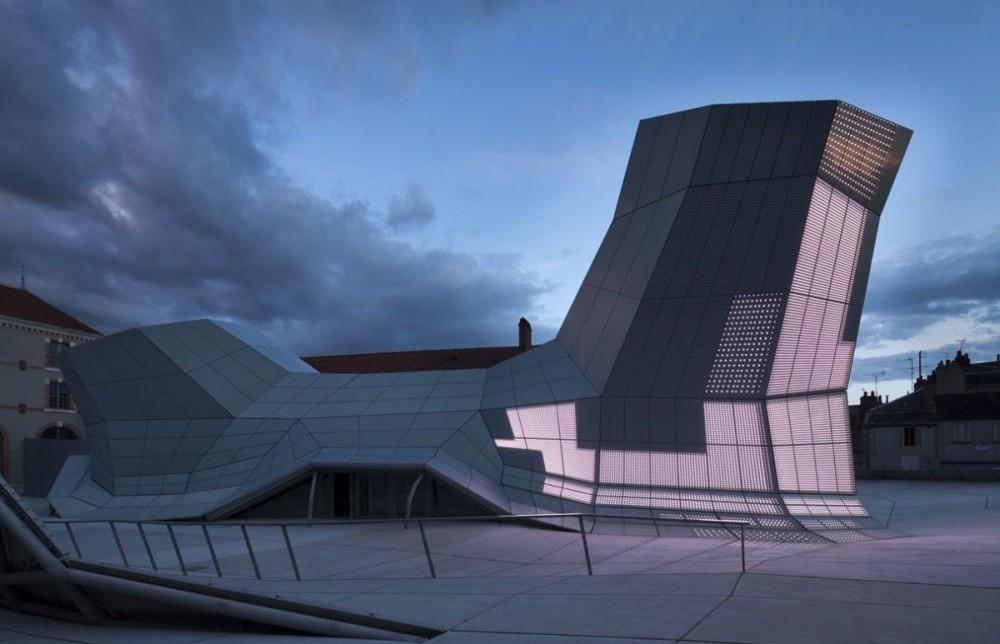 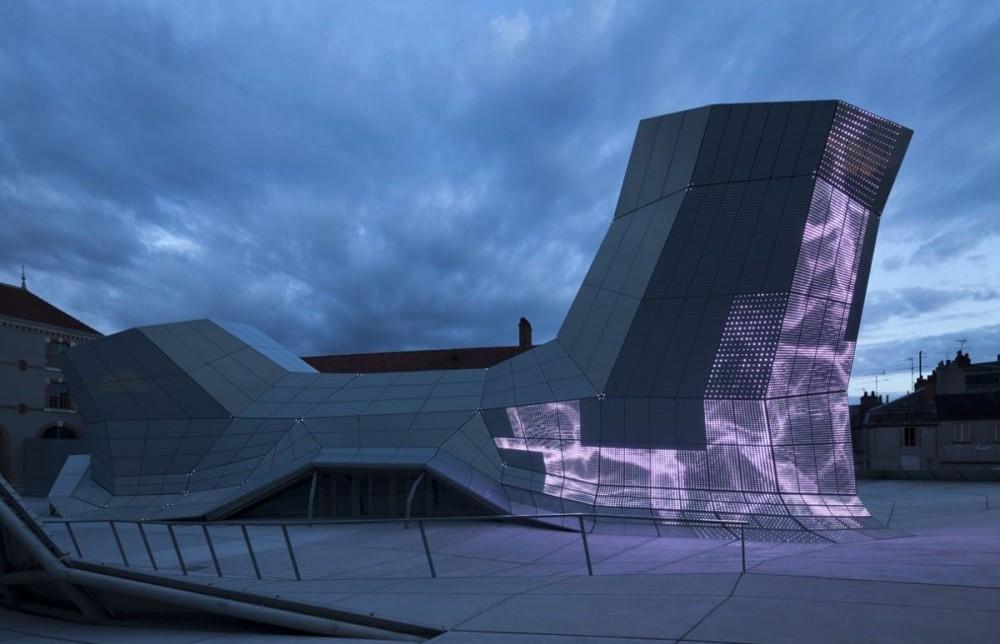 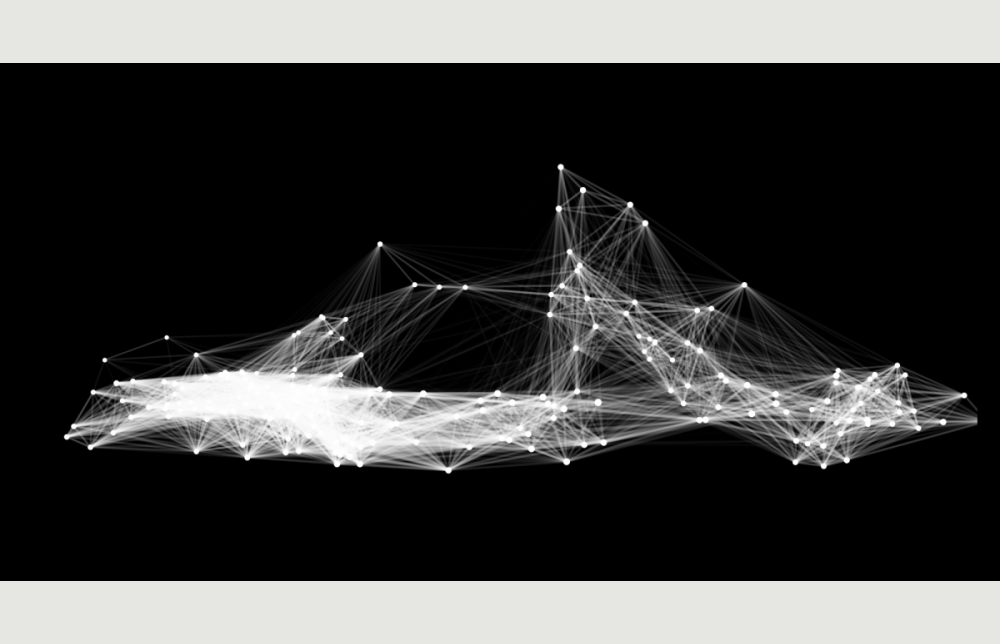 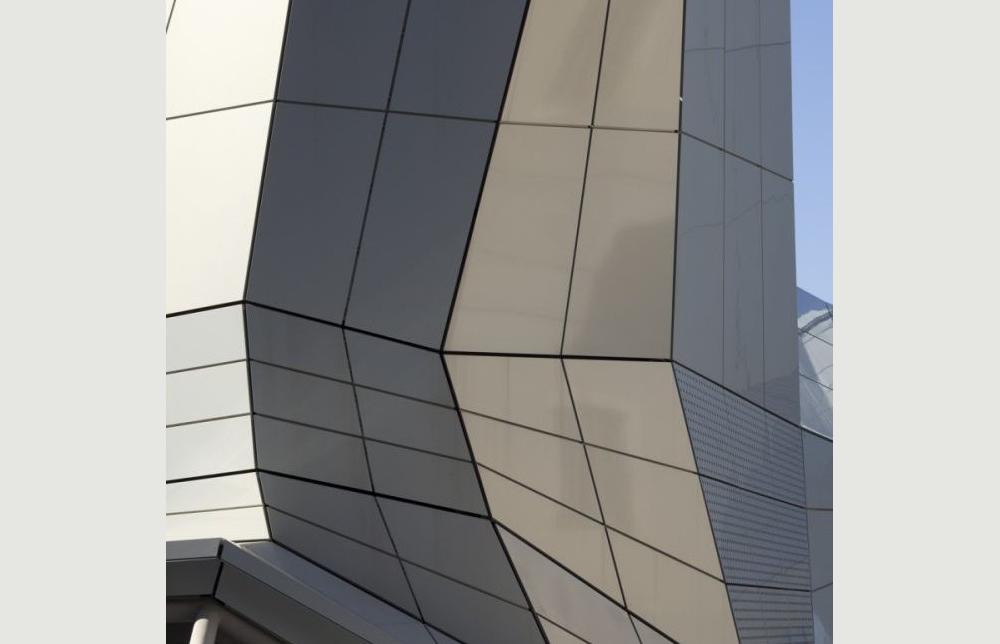 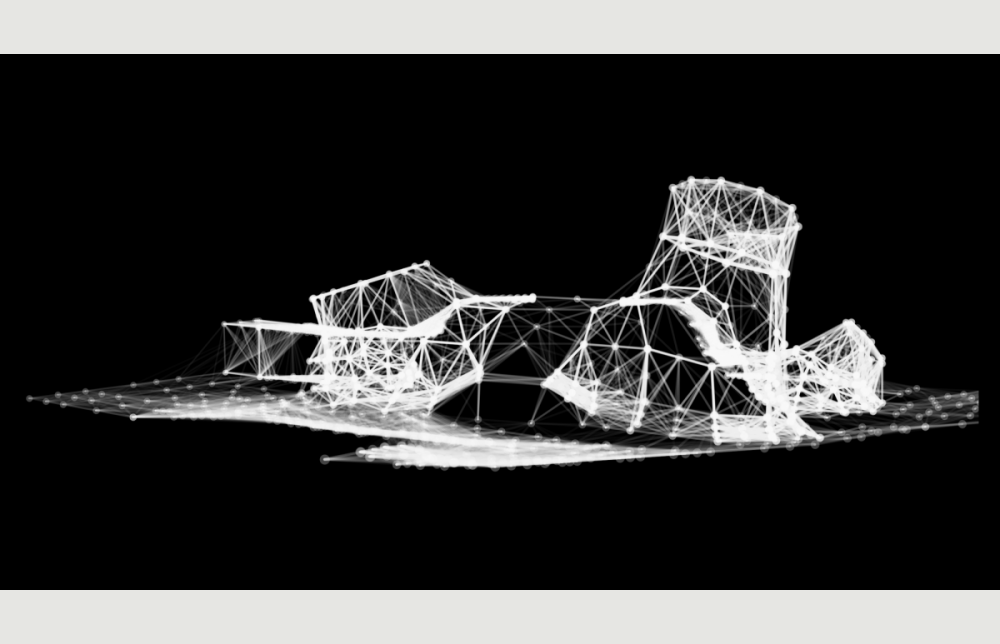 The architectural idea is to take the entire site, which determines the surface of intervention. We identified two predominate grids emanating from the historic context of the site. The meeting and the convergence of these two geometries materialises in a deformation, a zone of turbulence, the future presence of the FRAC Centre.

The inner court is treated like a public space, linking all the buildings and carrying the program of the FRAC. Our intention is to create not only a landscape but a topographic surface. This surface follows the interferences of the two building grids and accommodates the natural slopes the site towards the entries of the different programs of exhibition spaces.

The inner court is treated like a public space, linking all the buildings and carrying the program of the FRAC. Our intention is to create not only a landscape but a topographic surface. This surface follows the interferences of the two building grids and accommodates the natural slopes the site towards the entries of the different programs of exhibition spaces.

The volumes created by the meeting of these geometries are extruded vertically and stretched over the court and toward the city.They are organised into three parts and conceived to be simple and facetted in form, a language derived from the fusion of the grids of the site.

These “turbulent” extrusions each contain an element of the program: the first and tallest a temporary exhibition gallery with its accompanying scenographic spaces, the smallest an audiovisual gallery, and the third the welcome lobby, sales space, and a convivial social space which extends out into the court. This central space is an intersection, a place of meeting and exchange, material and immaterial. This ambulatory space leads the public to the temporary and permanent exhibition spaces and research areas.

The exterior and interior skins of the intervention are fine metallic and textile meshes which convey a perpetually modifying flow of information. The idea is to create a building which continually describes the process of creation, disappearing behind the lines which were drawn only to reappear in volume, a three dimensional image, the materialisation of architecture. Volume, light and image fuse together to create a dynamic form of architecture of information.

These digital surfaces are addressed to the city and, as such, the building surface transcribes flows of information into light images through an intervention of Electronic Shadow. These flows of information can be the weather, connections to their internet site or any capturable flow of real time information.

The light surface of the building is simultaneously an architectural and artistic intervention, an urban signal, and signage of the buildings’ activities. This idea is also pursued in the interior under the form of a dynamic system of signage. The objective is to give the FRAC a tool that is sized by its public dimension, open and visible.

By its new open urban façade, obtained through the demolition of the existing building on the Boulevard Rocheplatte, the FRAC Centre is connected to the urban cultural promenade of Orleans, the interior court thus becoming a public plaza. We have displaced the centre of gravity to the heart of the site. The new architectural intervention is the new point of gravity, a new structure, a new geometry and a new departure for the site, creating an architecture with a new presence that communicates a welcoming, an opening, and a vision for both the public and researchers. The project explains itself through its extraverted nature.

These “turbulences” are to be investigated as a metaphor, inspiring the architecture which is in turn exuded to the public or passers-by along the edges of the site.

The language of these turbulences was born of the site. We want this project to be as a creation of the site itself, practically “self-created” from site conditions, thus describing all the acting forces.

It is a project full of life, communicating, revealing, provoking, stimulating and informing.