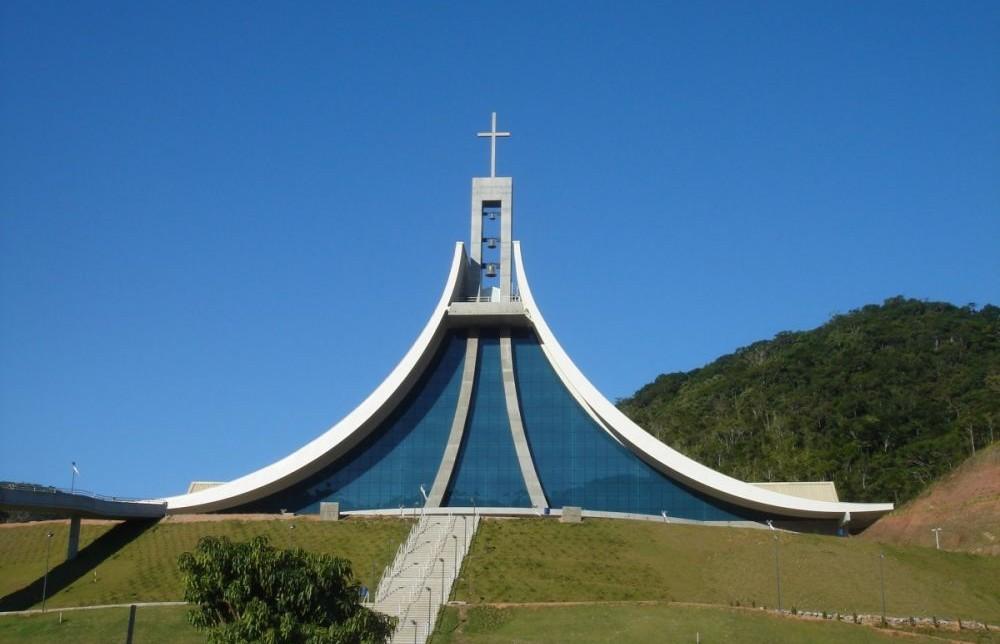 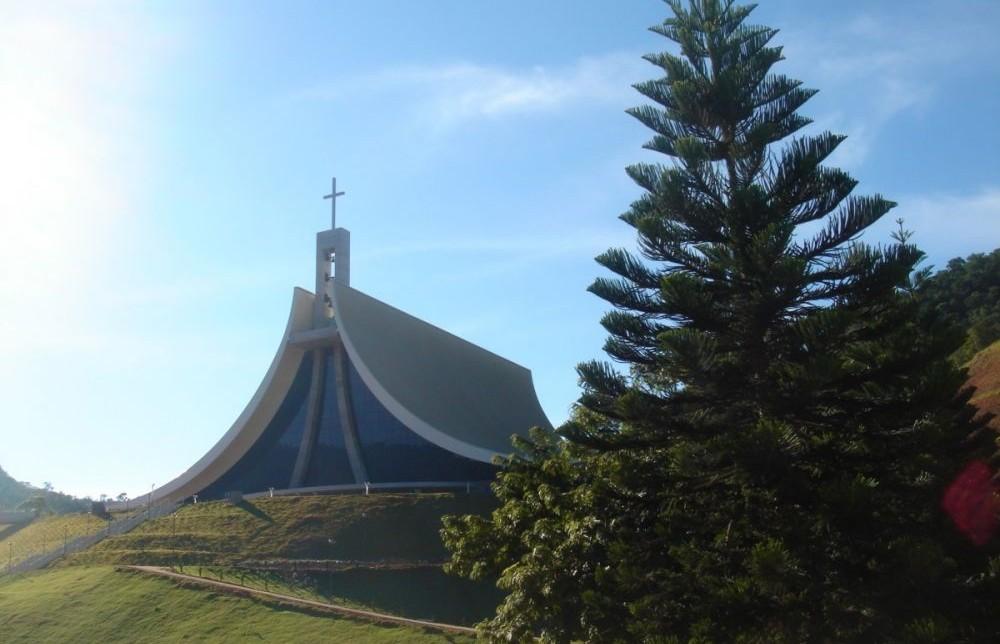 Icon of religious building, the coverage ascending lines stimulates the search for spirituality and meditation, like a mantle, launched candidly about building houses the main nave, chapels and support area, and defines access to the sanctuary.

Region that welcomed Amabile Visintainer when she immigrated with her family, Trento, Italy, to Brazil in the 19th century, the neighborhood VIGOLO in Nova Trento , SC, pays tribute to Mother who became the first Brazilian saint. Opened 15 years after completion of the process of beatification (step before canonization, which took place in 2002, both under the pontificate of John Paul 2nd), Shrine of St. Paulina expressly designed for work office HS Arquitetos, through the retelling of architecture Sacra traditional sought to represent in geometric compositions and volumetric simplicity that permeated the life of the religious.

The program is developed under full coverage modulated every 7.5 meters of water in two trim with visually design that refers to the traditional clothing of certain religious orders. There are three distinct sectors – the main nave, chapels and support area – in addition to circulation and access. These are marked by the movement of the roof, the sides of the nave, where there are the chapels, and the central tower representing the Holy Trinity, at the entrance. The ship has plant conical shape, allowing visualization of the altar by all the faithful. The sacristy, located in a strategic point, has easy connection with altars, chapels and confessionals.

Bright and Airy spaces “The manner up coverage aims to search for spirituality and meditation, enhanced by the entry of filtered light in the upper. The lighting and natural ventilation through continuous band on the central axis of the cover, looking to create a space full of light coming from above, as a form of inspiration for meditation and prayers” say the architects. The air enters through the side windows, circulates through the interior of the temple and out the central skylight.

“A constructive solution met the needs of the range spaces, in order to keep the ship and chapels entirely without visual interference. For this internal pillars were removed and smoothed the form of metal beams apparent. The main structure is made of concrete pillars molded on the spot, two beams prestressed concrete and steel structure to support the roof.”

Installed at 28 meters from the ground, the parallel beams prestressed concrete support on two main pillars, east and west of the building. They expire span 56 meters, equivalent to the entire depth of the nave and chapels, and also serve to support the clerestory. Supported the pillars of the extremities and the prestressed beams, metal beams apparent, the type casket, support coverage, mature spans 35 meters.

To avoid abrupt temperature changes and minimize external noise, especially in the event of rain, the roof was constructed with thermal insulation tile system zipped offering double thermo acoustic mineral wool. At the bottom of the cover, perforated aluminum sheet run as lining and also cooperate with the acoustic environment. Forest view The choice of building materials befell the puro elements, that meet the requirements for easy maintenance and long life. These were conditions of the project, since the sanctuary was designed to hold about 3000 people in the main nave, 150 the chapel of Santa Paulina and another hundred in the Blessed Sacrament chapel. To integrate environment prayers to the nature of the surroundings, providing visual range of the Atlantic, on the river valley Tijucas, the architects opted for the glazing of the façades.

The main face got laminated glass from floor to ceiling. “Because it is a sanctuary, the initial desire of the authors was to use a blue glass with low reflection, to allow integration interior / exterior,” explains the architect Claudia Mitne, marketing manager of Glassec. But the products available in the market had very high internal reflection. “With the lights on, especially at night, the reflection would bring discomfort,” says the architect.

The solution came with the use of  the Blue GlassEnergy Special, hat, although not reflective attended the color specified by the project and the demands of thermal comfort. The façadestructural glazingis composed of 680 meters square that product laminate eight millimeters and 570 square meters on the opaque pattern. On the east side, were applied 24 square meters of stained glass.

It had been as a premise the design of lightness construction and the security of making integrated into the environment and landscape, while protected. Question as to the specification, laminated glasses have been defined, it being then in different compositions in each facade, due to the sunlight.

Access to the sanctuary is by stairs or ramp, getting the approach of vehicles restricted to special occasions and handicap people. The ramp starts in the central square, where is located the original church of Santa Paulina. The route of the vehicle also comes from the square, passes through several memorials and surrounds the temple, enabling embarking and disembarking in the desired area.