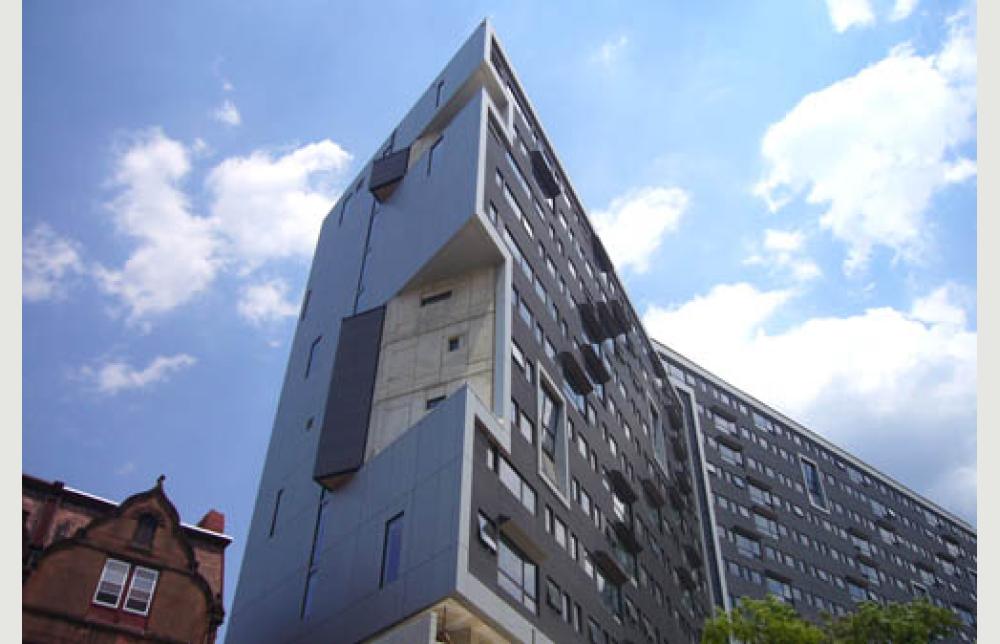 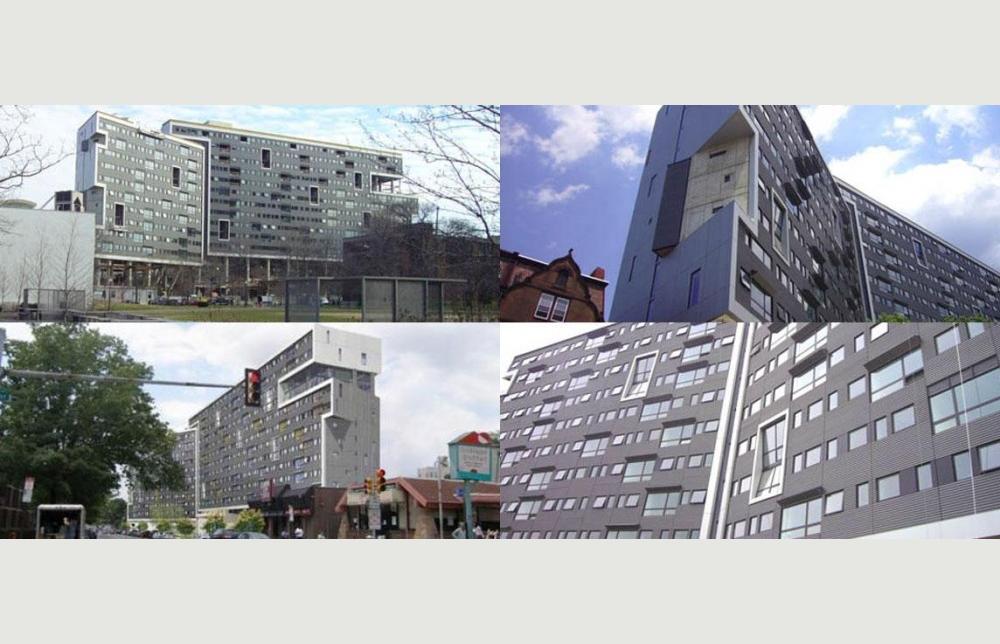 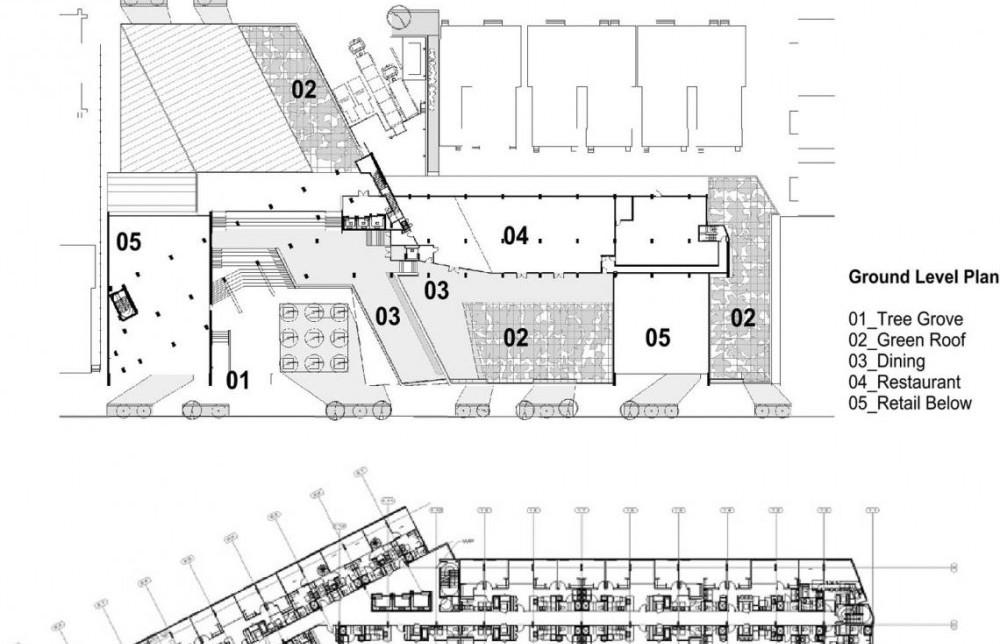 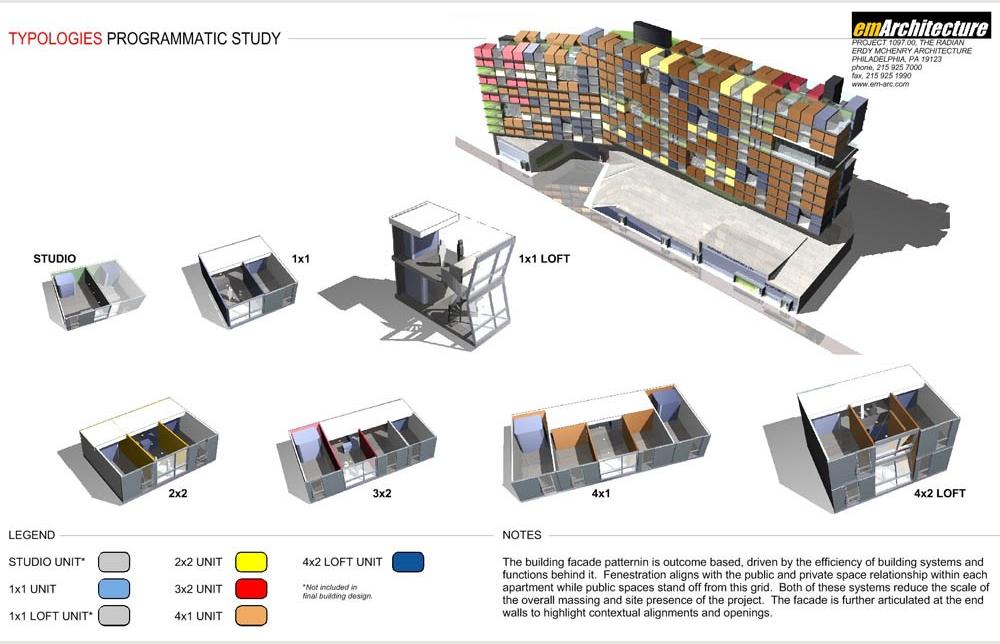 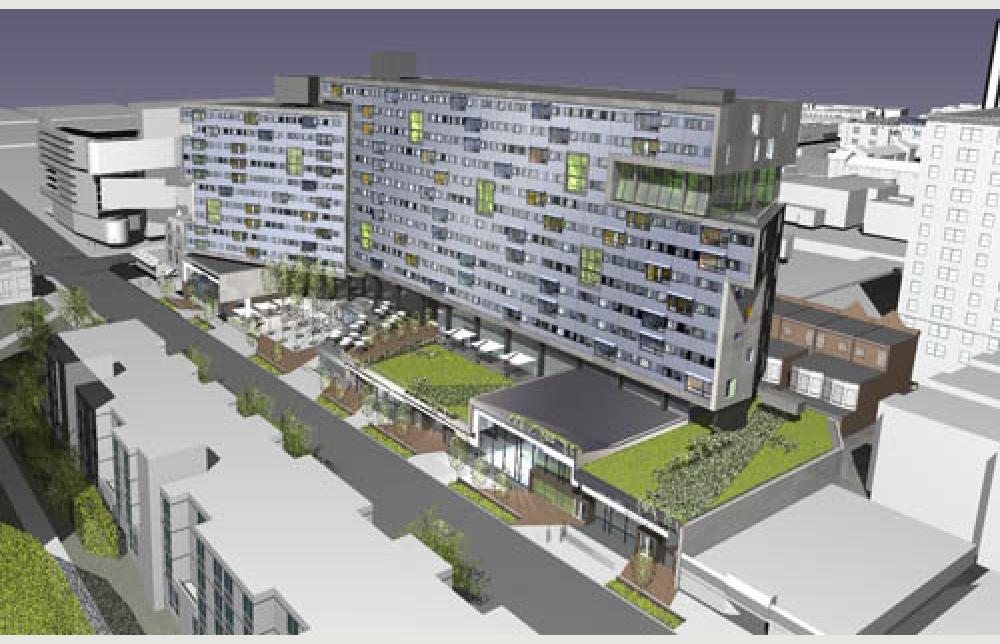 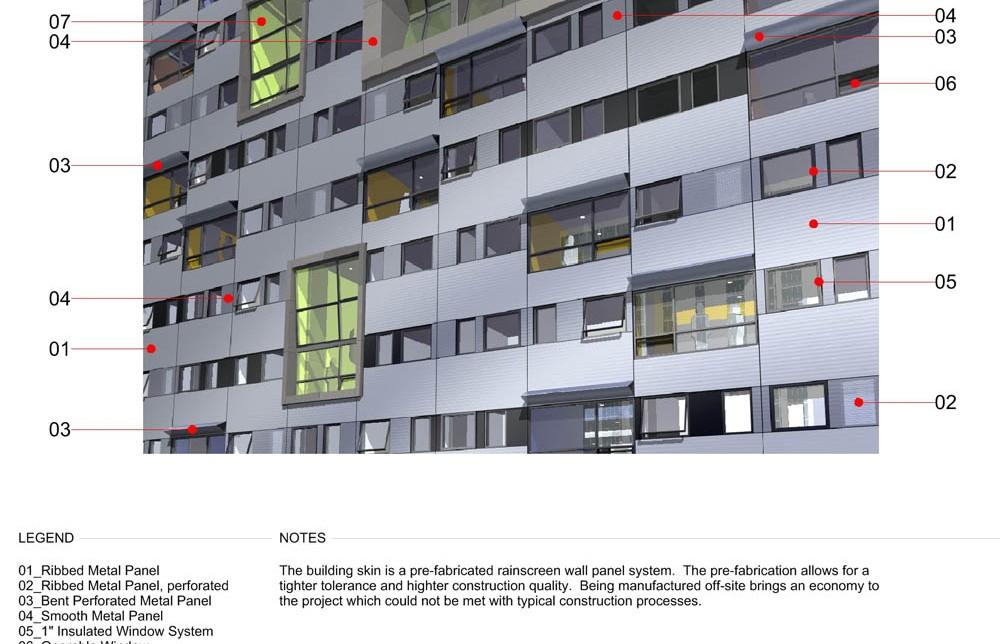 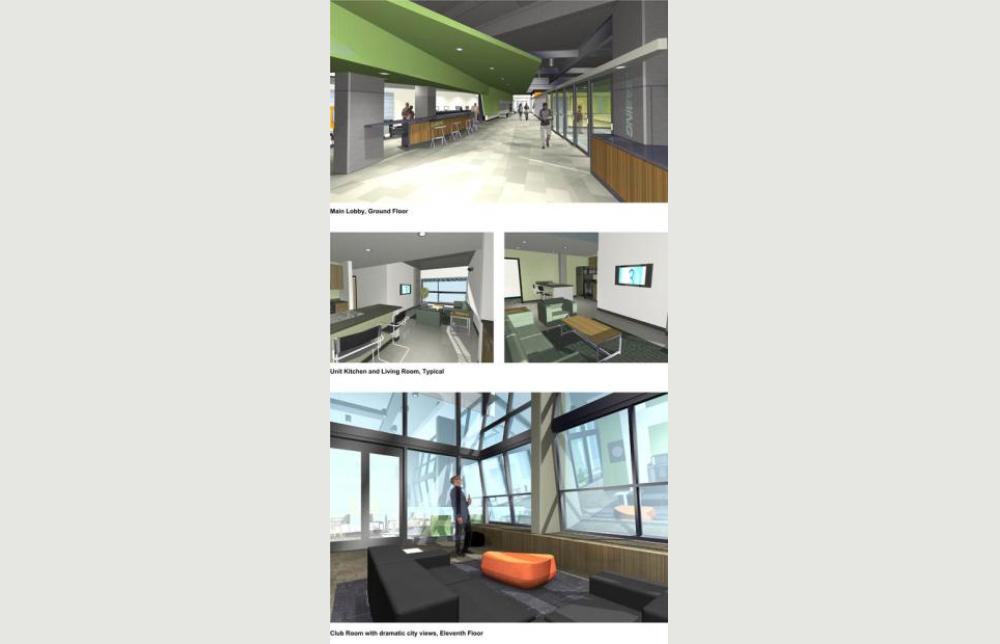 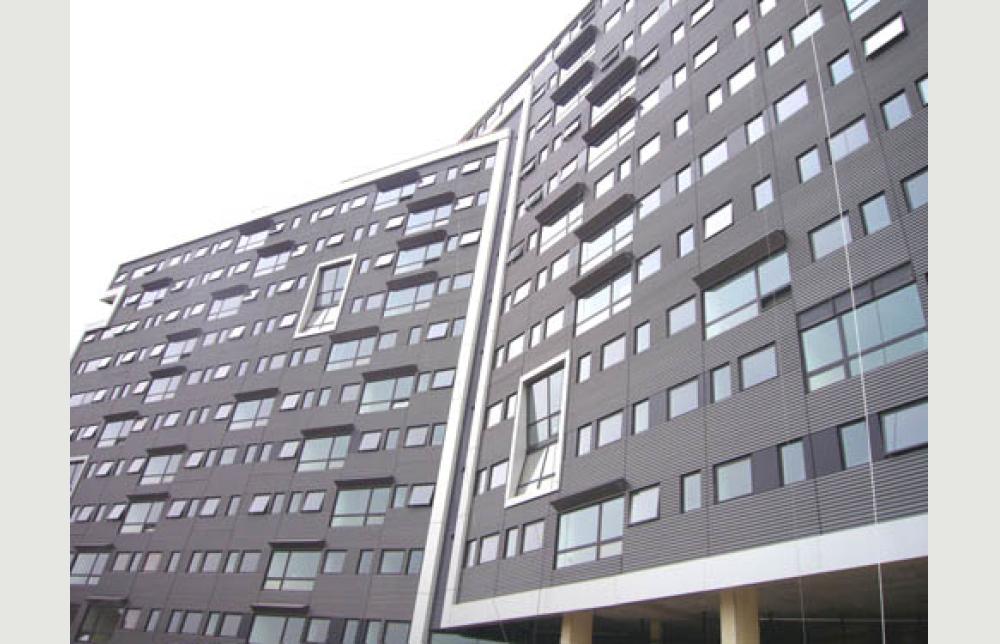 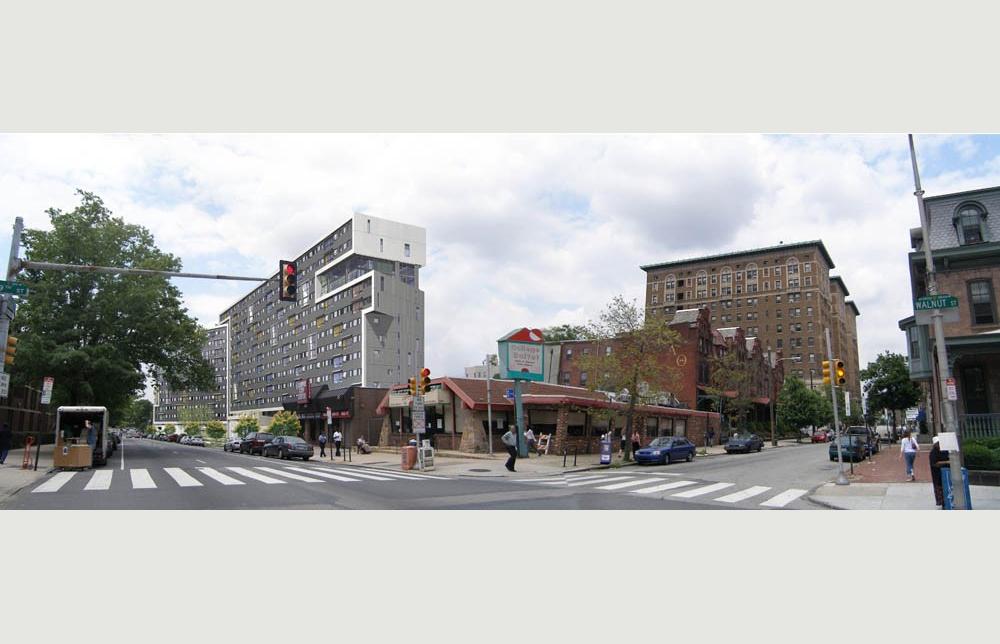 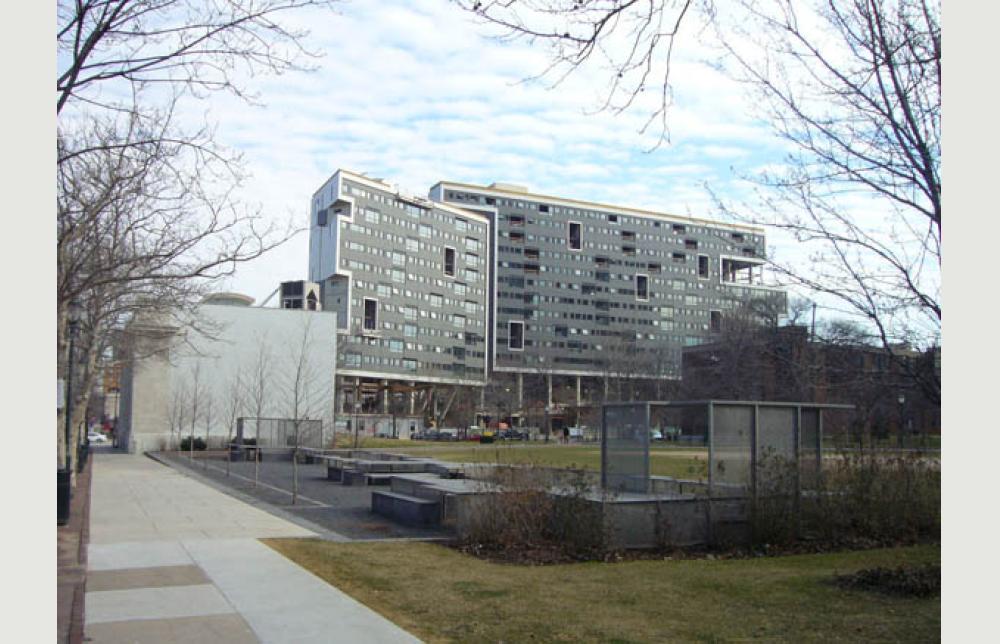 The 3900 block of Walnut Street lies at the northwest edge of the University of Pennsylvania campus. The site is currently composed of buildings of varying characteristics: a low-slung suburban strip mall and McDonalds, 19th century row-houses with ornate brickwork, and an English Gothic church among others. Particular consideration is taken towards this existing context as well as continuing campus development projects along the 40th St. corridor, connecting campus edges to west Philadelphia. The project was challenged to both respond to and activate these contextual edges. Urban integration is important to position the project within the city while maintaining University connectivity. Retail and residential programs provide the opportunity to explore both these boundaries and scales of urban context simultaneously.

The project looks to take advantage of under-utilized existing urban context as event space. The project explores the living unit as a fixed module for design, but as a flexible system for understanding space. The private vs public space relationship develops from this concept and is revealed in the patterning of the facade.

This project aims to understand social relationships that exist within urban college campus typologies. Social scenarios are studied through unit type design and configuration. Relationships are developed that correspond to random adjacencies within the building fostering interactions between every resident. Particular living configurations were studied as modular groupings to realize a systematic approach to the design of building components. The variations represent a similar approach to the relationship of public and private spaces within apartment units. In addition, variable configurations lend themselves to unique conditions at each plan level altering the facade accordingly.

The scale of the project is further understood at the street level where a retail plinth extends from beneath the residential tower gesturing to the pedestrian. Building massing is pushed to the center of the block, reducing street level sight lines in favor of center city views.

Ground level retail pushes back from the street opening a public space for informal gathering. The dormitory entrance exists along this axis and public activity extends up and under the residential tower via a grand stair. This open court aligns with an adjacent quad on the south side of Walnut Street connecting to Locust Walk. Outdoor dining options are provided at the upper terrace level and allow for glimpses onto the street. A grove of trees is offered as mediation between the retail and residential components. Residential floors are cantilevered above the plaza and residents enter using a folding stair that extends vertically to the terrace level. Additional outdoor dining space is planned at this level to service small cafes and restaurant tenants. The urban lifestyle is highlighted and re-invented in this space.

Ground Level retail also extends continuously through the block and spills onto Sansom St; addressing both the larger-scale 40th Street retail corridor and the largely residential scale of Sansom Street. A second residential entry is positioned on the Sansom St. side of the site to bring students into and through the thickness of the building.