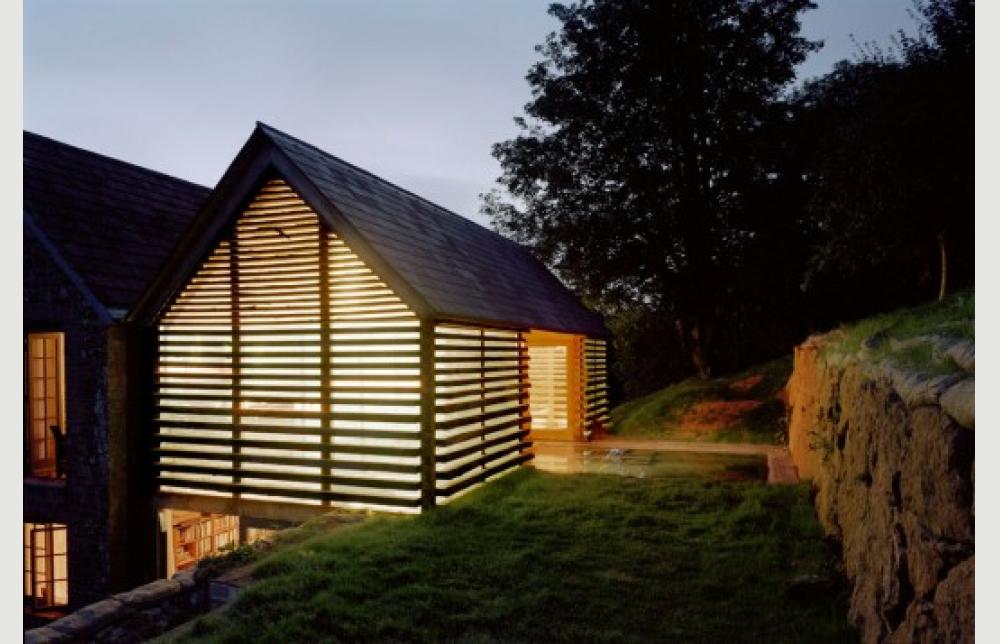 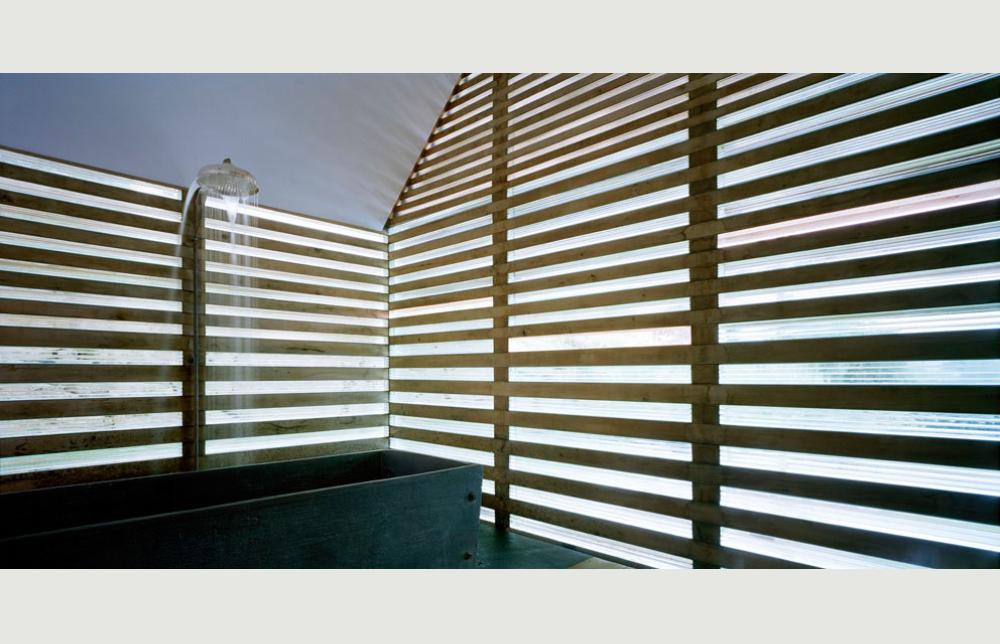 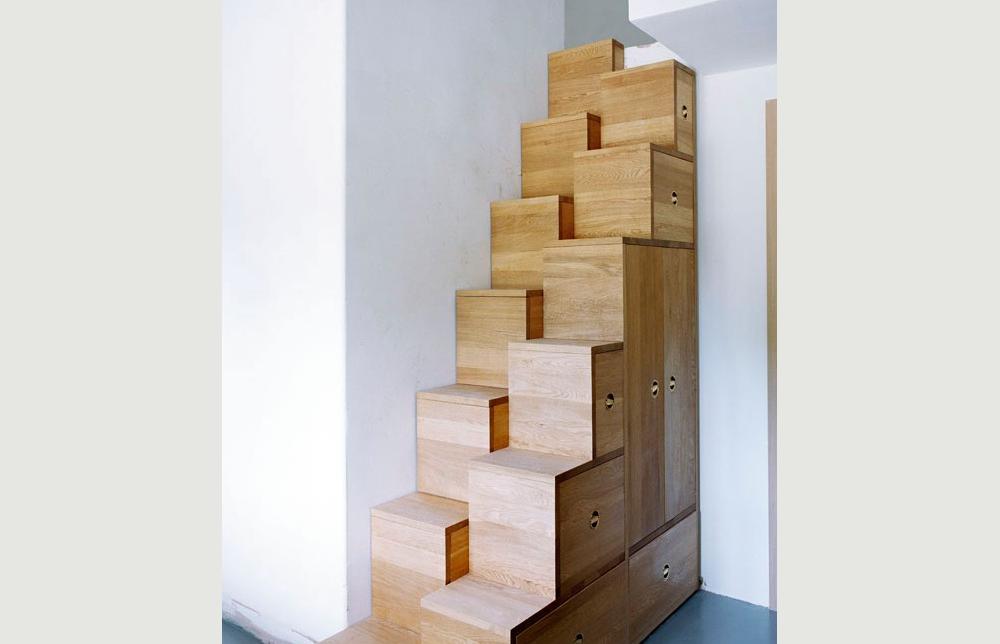 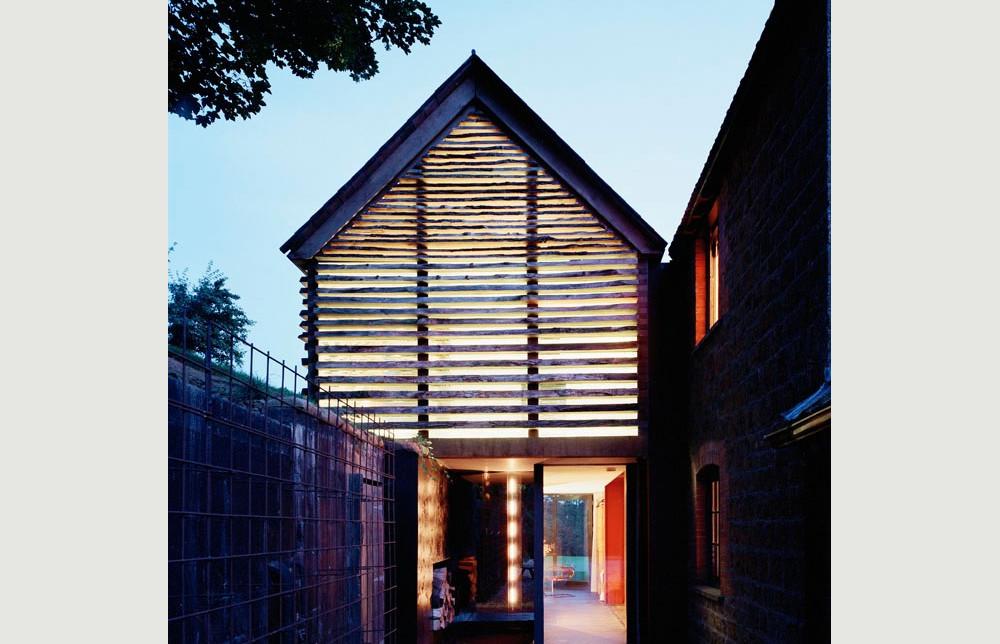 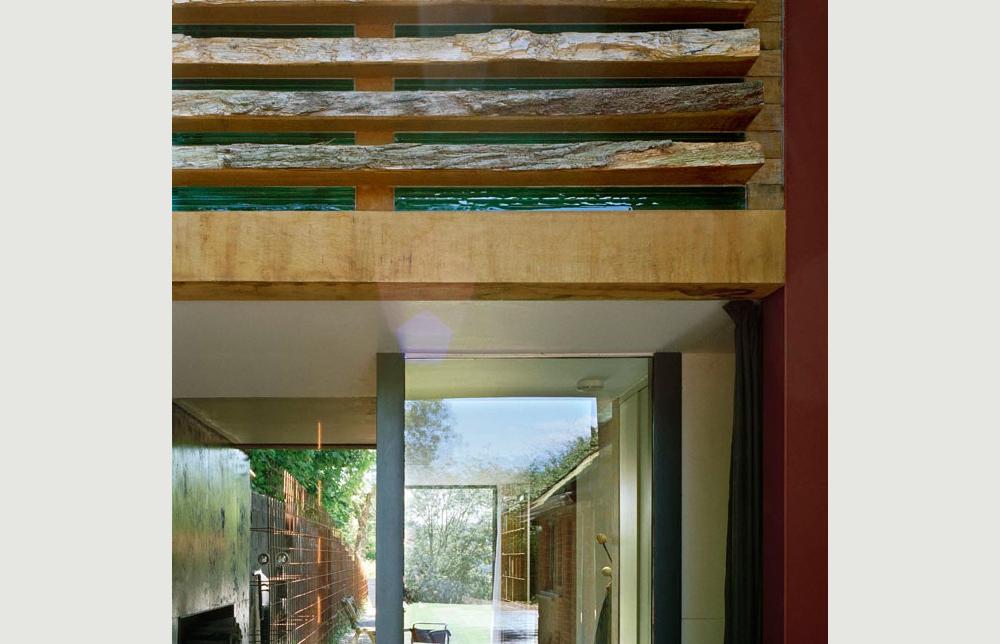 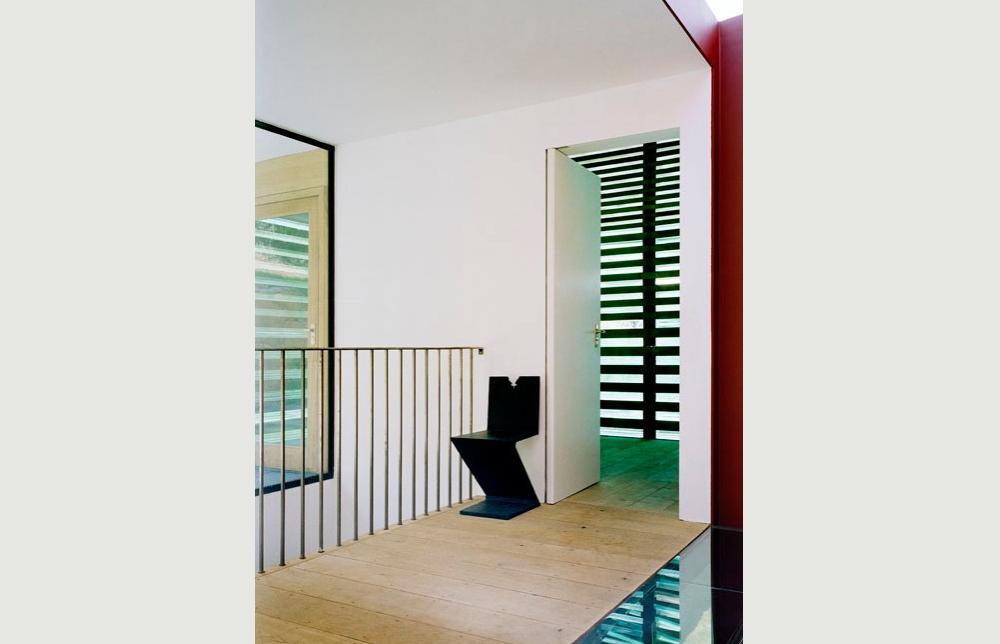 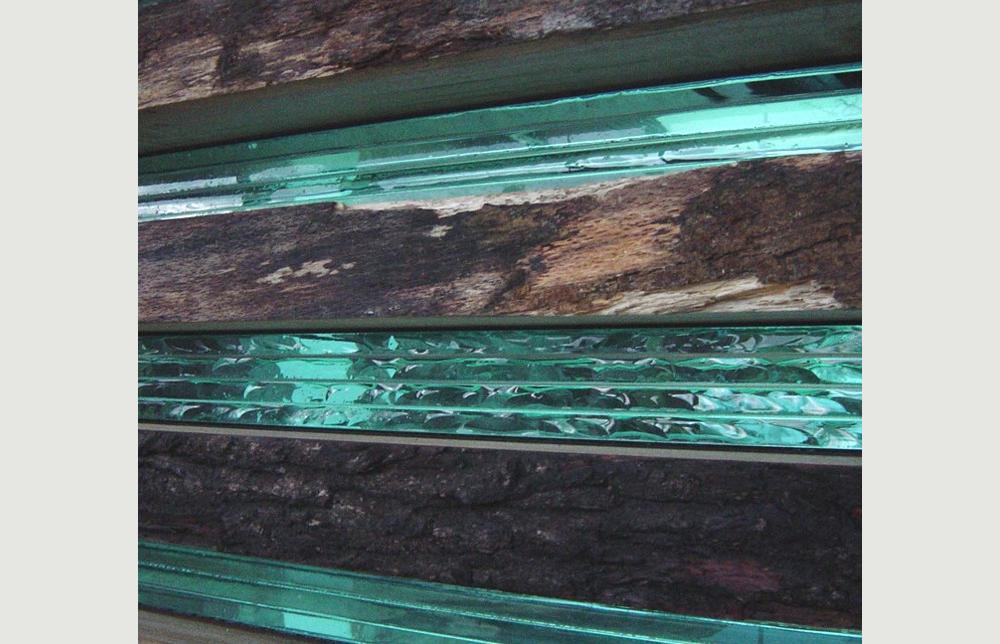 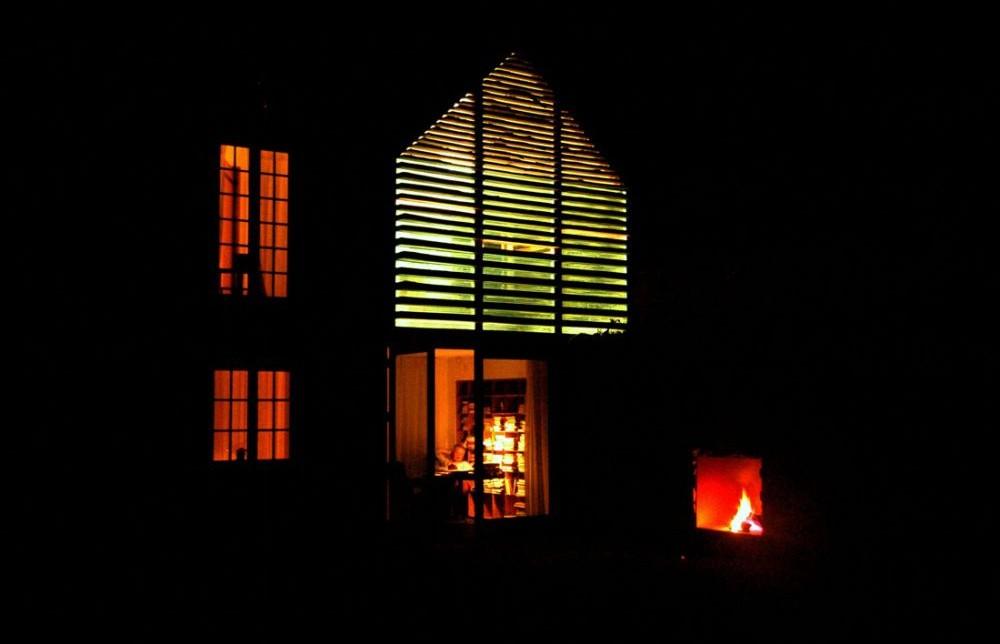 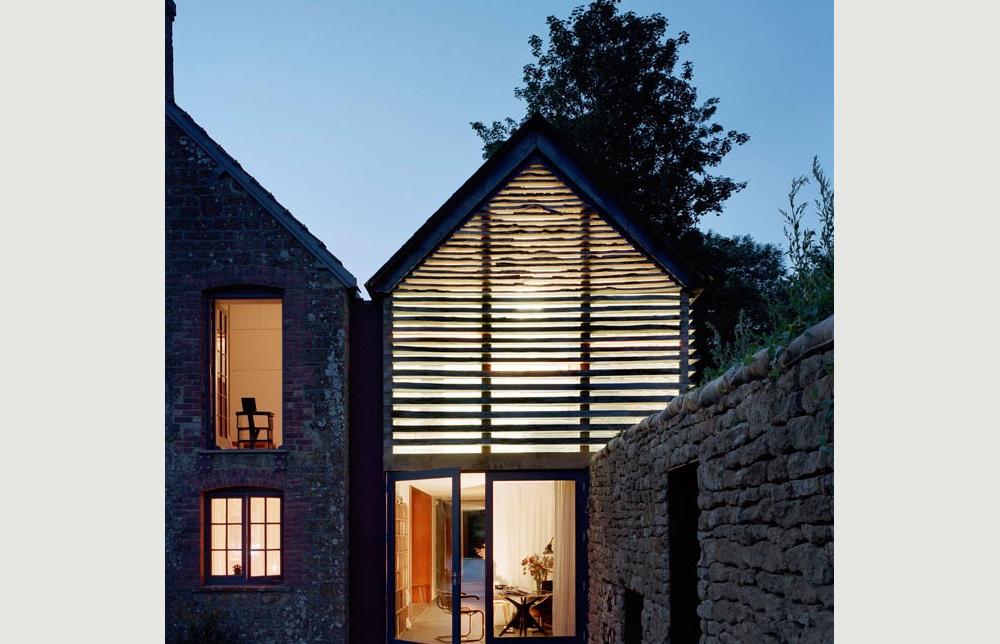 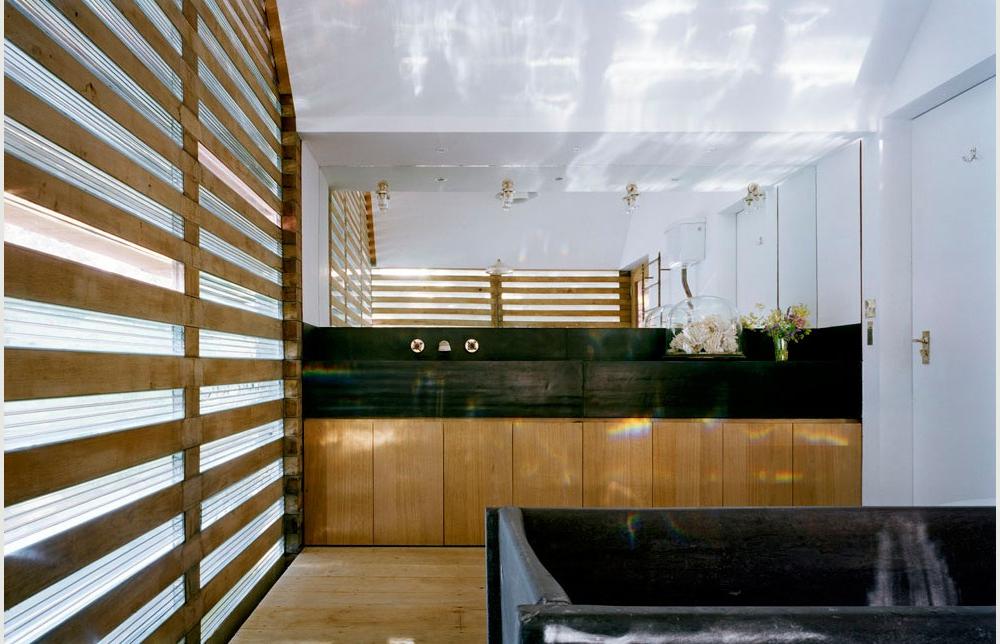 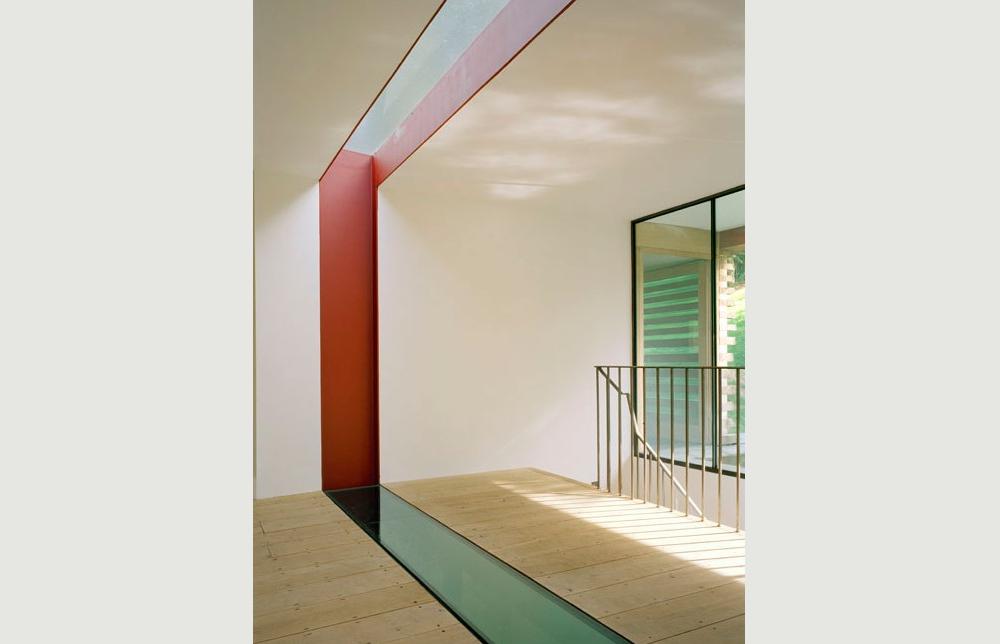 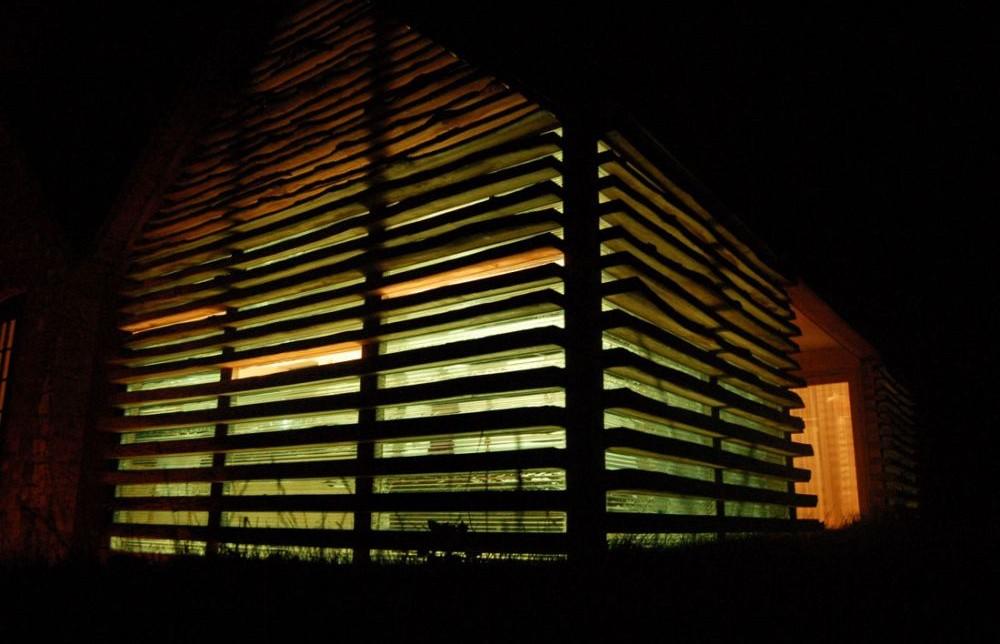 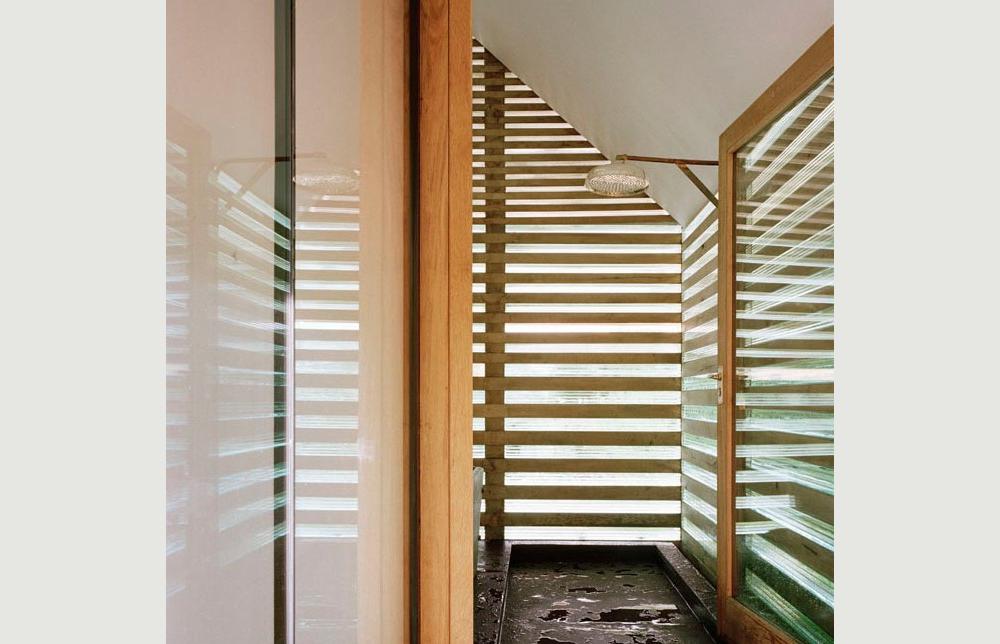 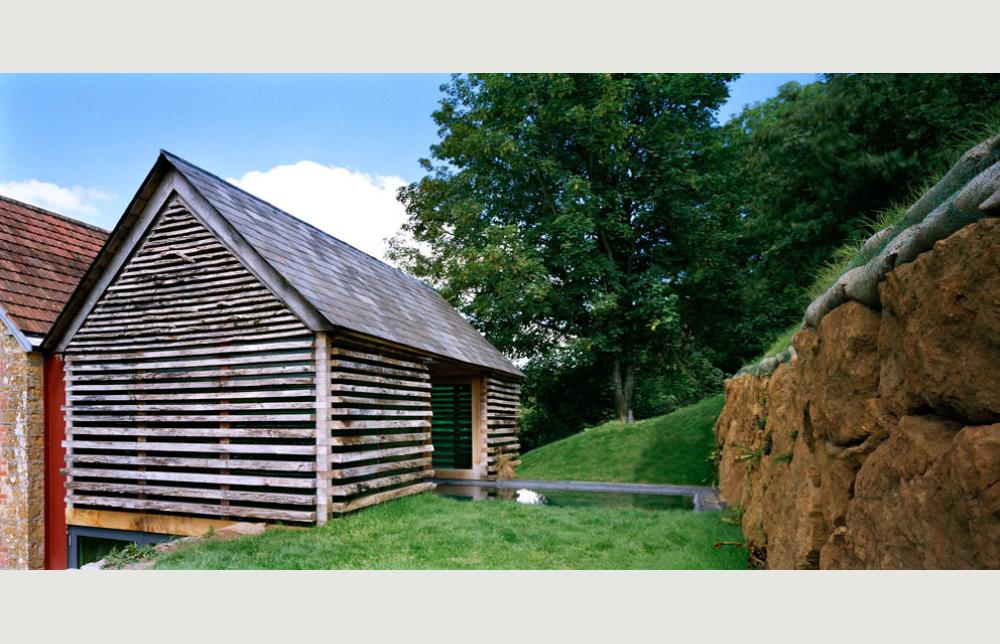 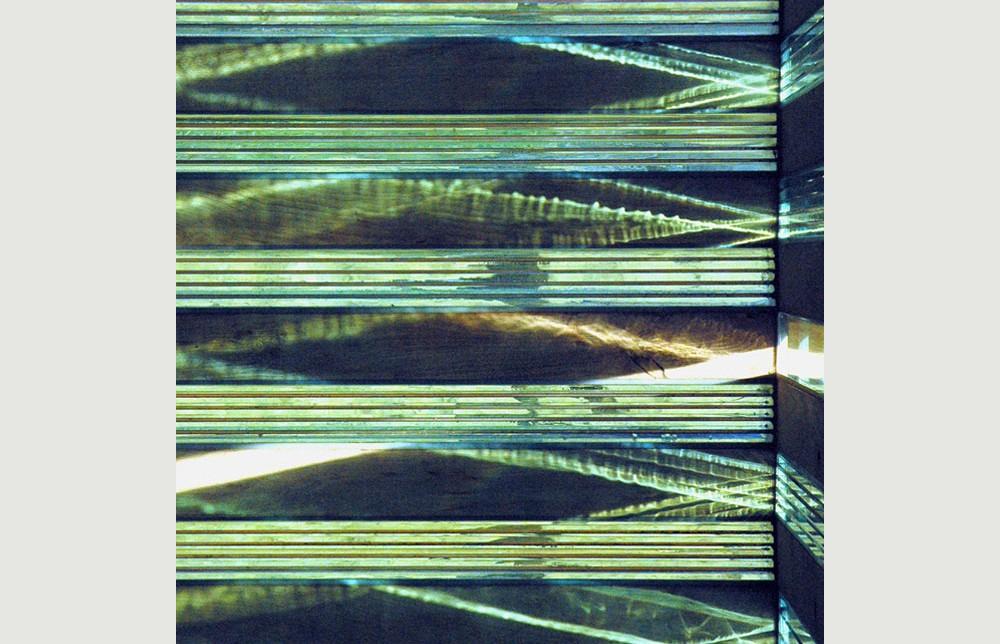 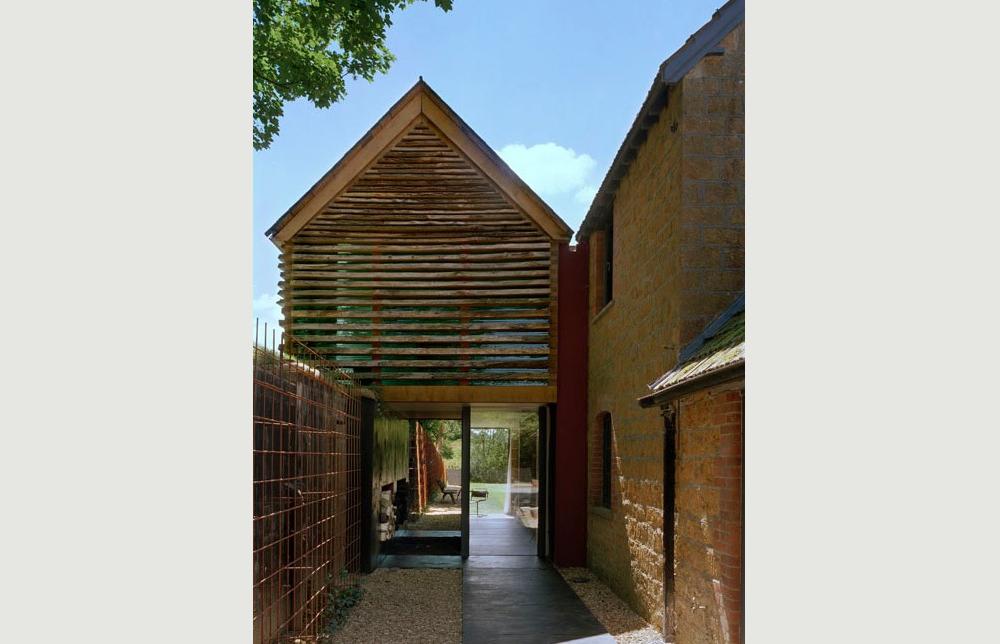 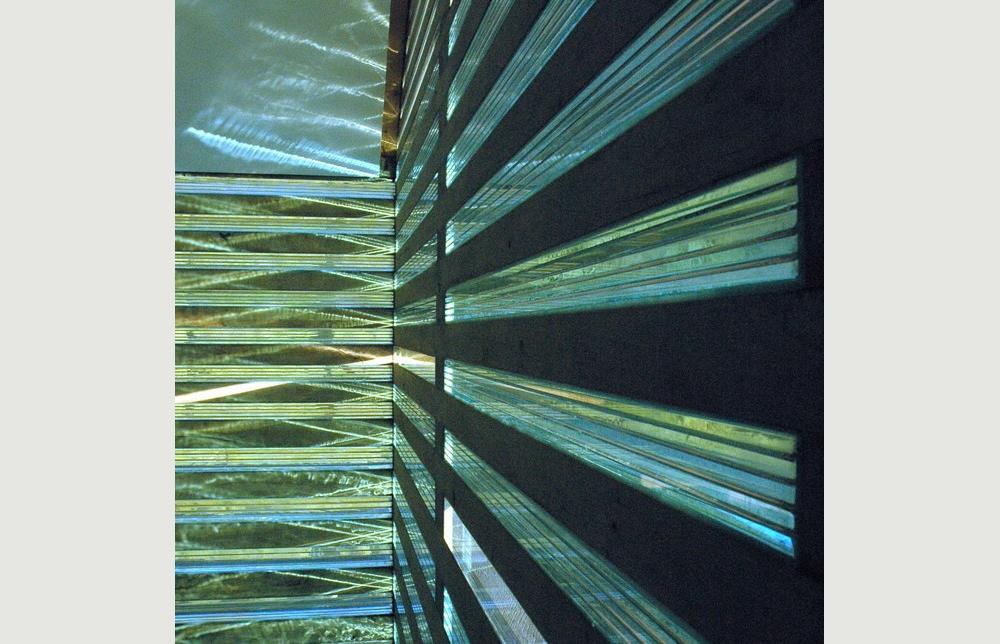 The conversion of a former Dairy to a five-bedroom house with a small pool. The project sits in an 850 acre Estate in Somerset. Pragmatically the space was to be re-planned; lean-to sheds removed and an extension added to create a total of four to five bedrooms, three bathrooms, more generous circulation space with rooms of better proportions. The brief changed during the design; what was originally to be a letting property became a retreat for the Client; a place to escape the main Estate. It was to be discreet with the intervention to appear as a natural extension of the existing structure. The design set out to appear ‘un-designed’.

The extension houses two bathrooms; everything behind the retaining wall can be flooded with water. Layered oak and laminated float glass produce an eerie, filtered light. The dematerialising effect of refraction and reflection create an aquatic underworld. The way the light moves around the house over the course of the day draws the user through it. In the morning low light floods the east with the glass acting as a prism that projects watery green lozenges over floors and walls. By midday, the sun is overhead, streaming through the roof light slot and penetrating the two-way mirror bridge giving views from the ground floor through the building. At night this is reversed, and the flames in the fireplace are visible through the floor of the landing.

The aim was to use as many local materials as possible. Estate timber is planked and dried in the storage barns in the farmyard opposite the site, and the method of drying – where raw planks are separated by spacers to allow air circulation – became the generator of the logic and aesthetic of the extension. The glass was layered in the same manner. The pieces increase in depth towards the base to reinforce a sense of weight and rustication.

Rather than demolishing and rebuilding, the sense of ‘retreat’ was to be reinforced through ‘camouflage’; the form and massing of the extension echoes and compliments the existing structure. The house was to appear unchanged from the outside, and to reveal itself on entering – against expectations. The entrance sequence was to discourage casual callers. The most private spaces became the most generous and luxurious; this was to be a building that privileges solitude.
The Construction Process:
The gable end walls were conceived of as rigid beams which span between the large steels fixed to the existing building and the bank opposite. The construction alternates interlocking layers of oak and laminated glass blocks. The extension was constructed by a local cabinet maker – Paul Longpré – used to millimetre tolerances and very fine finishes. The timber was cut and finished in his workshop two miles from the site, and the glass blocks laminated by a specialist glass worker nearby.

The oak retains the waney edge on the outside; the inside is finely sanded. Similarly, the blocks of laminated glass are left rough on the exterior, and are polished on the interior. The glass draws light through the walls to create the effect of lightweight construction internally, while the exterior appears as much heavier, rougher and rustic. The structure was built up of the prefabricated pieces on site. The glass blocks sit on rubber gaskets which in turn sit directly on the timber. A foam seal sits on the surface of the blocks to form a weatherproof movement joint, clear silicon forms a final weather seal. Pilkington donated the glass for the extension as this technique has not been used before.

Glass has been utilized in many different forms to reinforce the conceptual ‘serial unraveling’ of the house. Sensually, the laminated glass blocks form a watery barrier as structure and skin, sending refracted light around the bathing spaces allowing a sense of enclosure from, and connection to, the landscape outside. Instrument Glass, who produce lenses for scientific and military use, provided four ‘windows’ of low iron glass blocks for selected views out. Two-way mirror emulates the water in the bathing pool as a strip through the building, allowing views through two floors depending on relative light levels/the time of the day. Used at the entrance, it reflects the landscape at the approach to the house dematerializing the staircase and base of the building and making it appear transparent. It also forms a screen for the strip of light bulbs marking the main door. A pair of antique telescopes set into the two way mirrored wall construction, allow scrutiny of visitors to the house. Self-cleaning glass forms the screen to the pool, and the roof-light glazing.