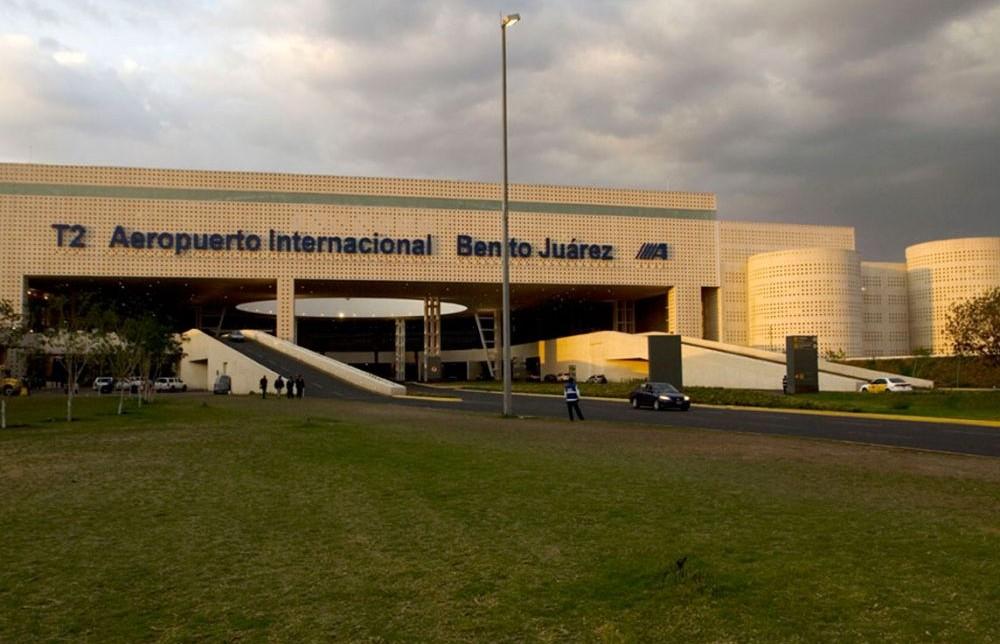 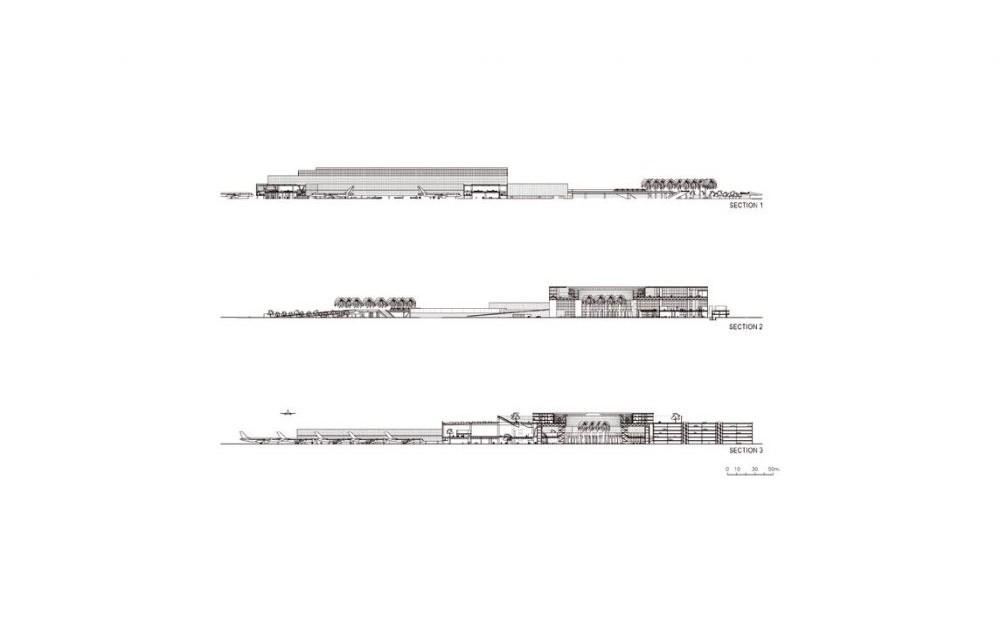 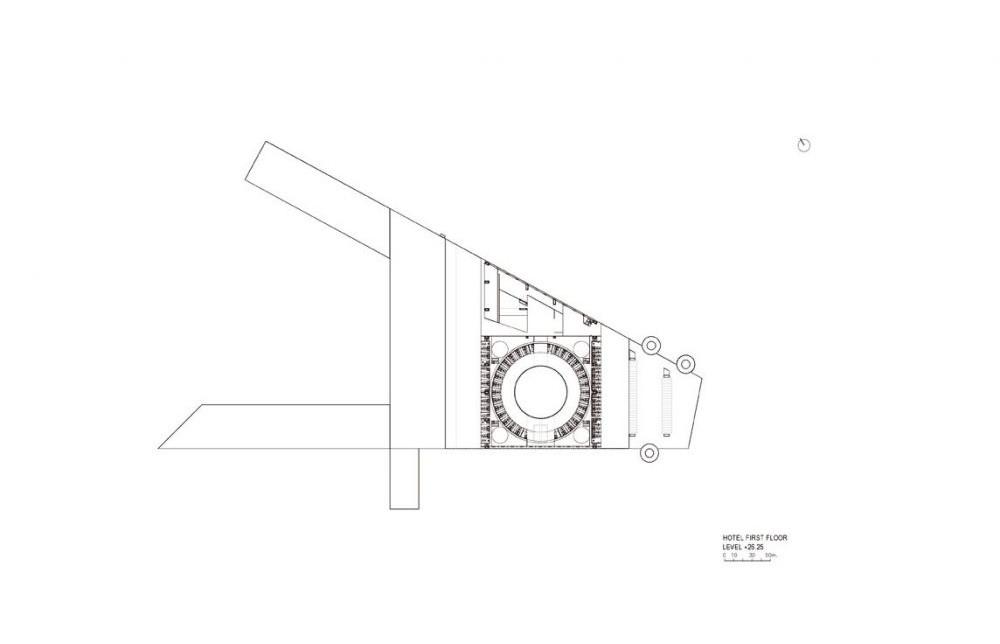 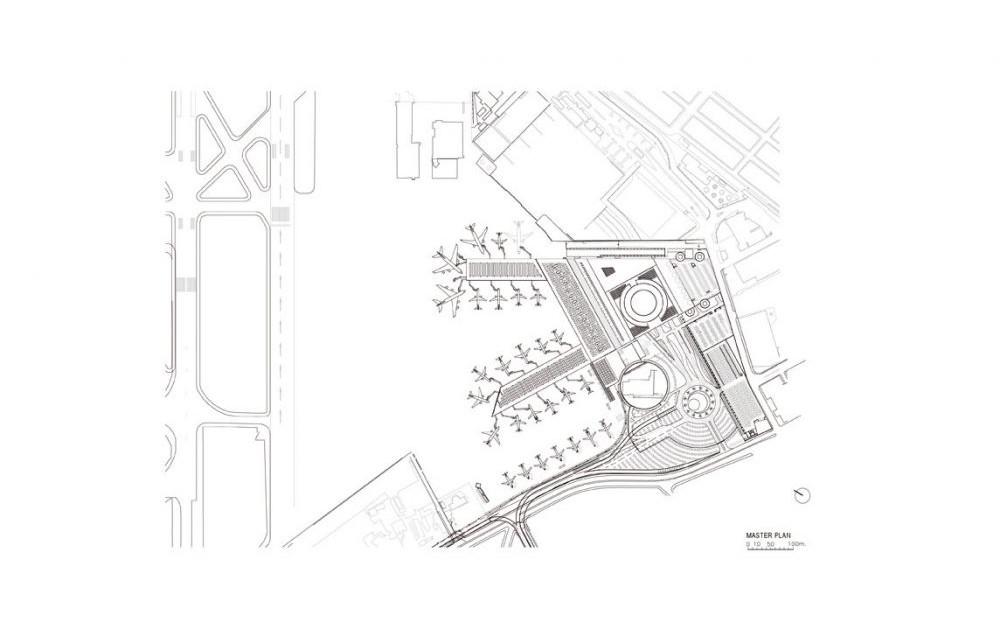 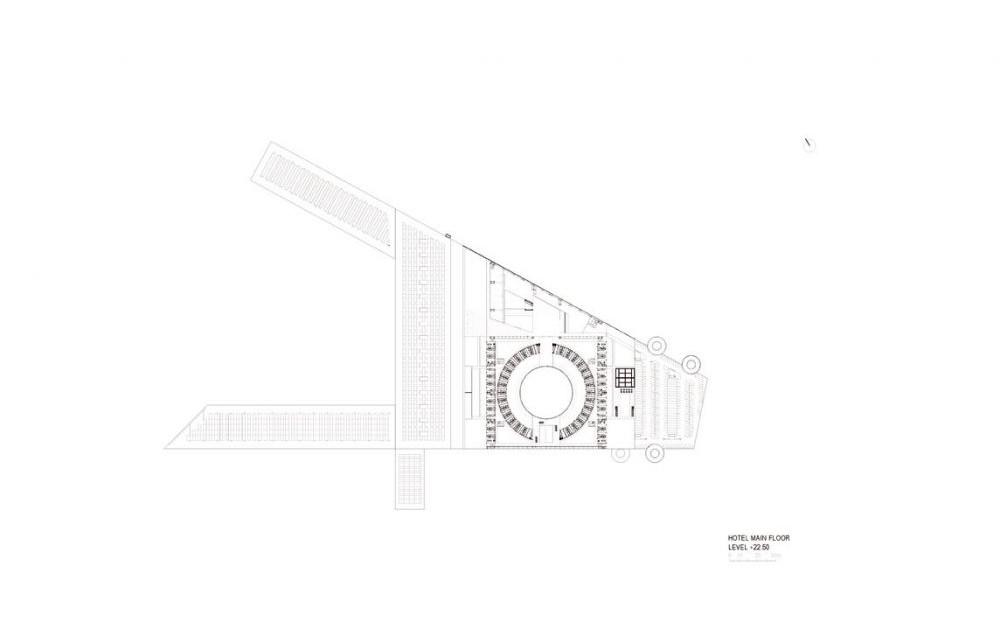 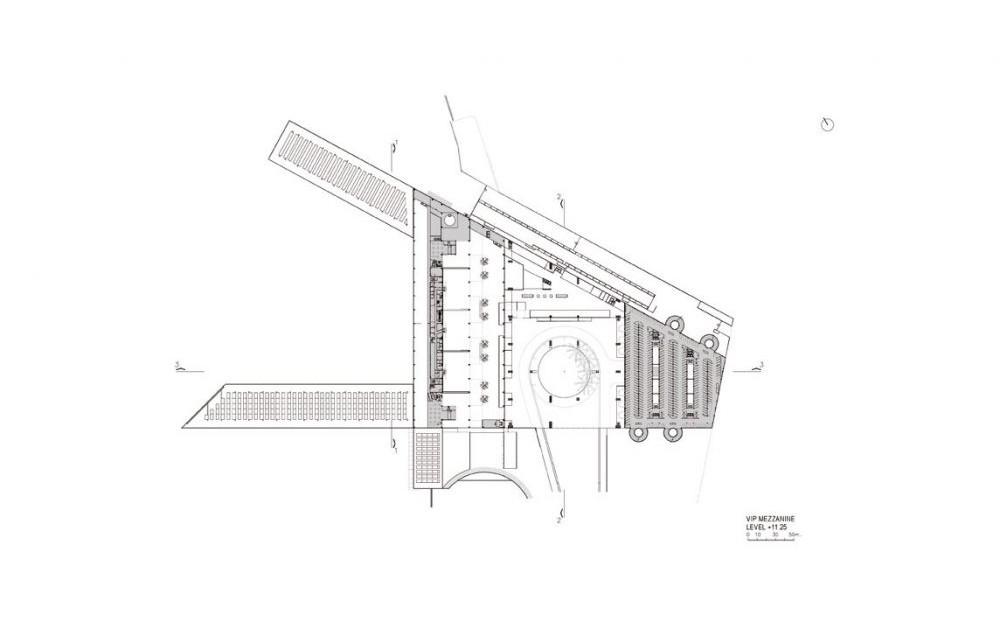 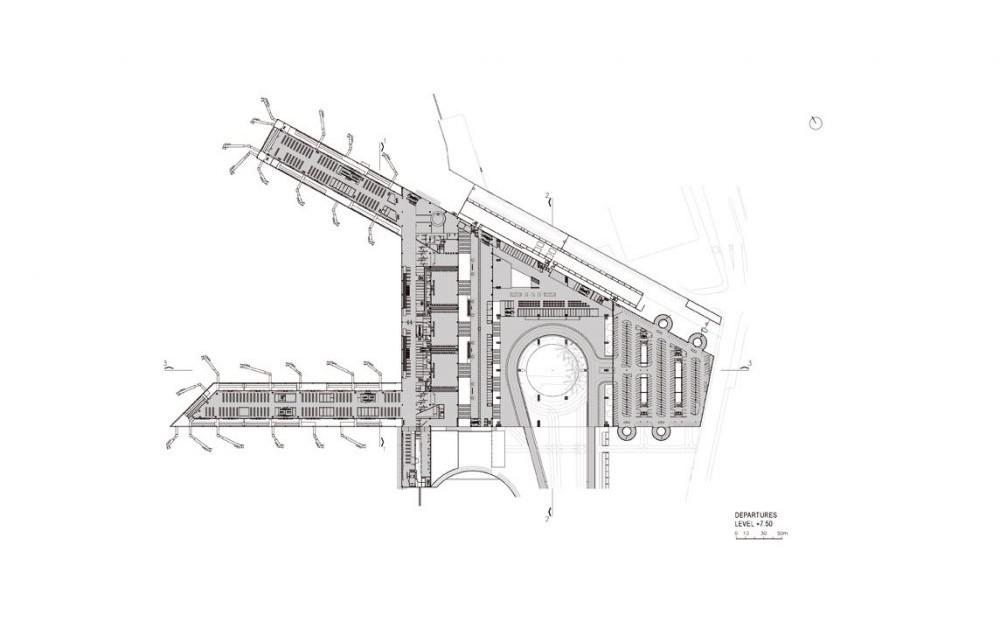 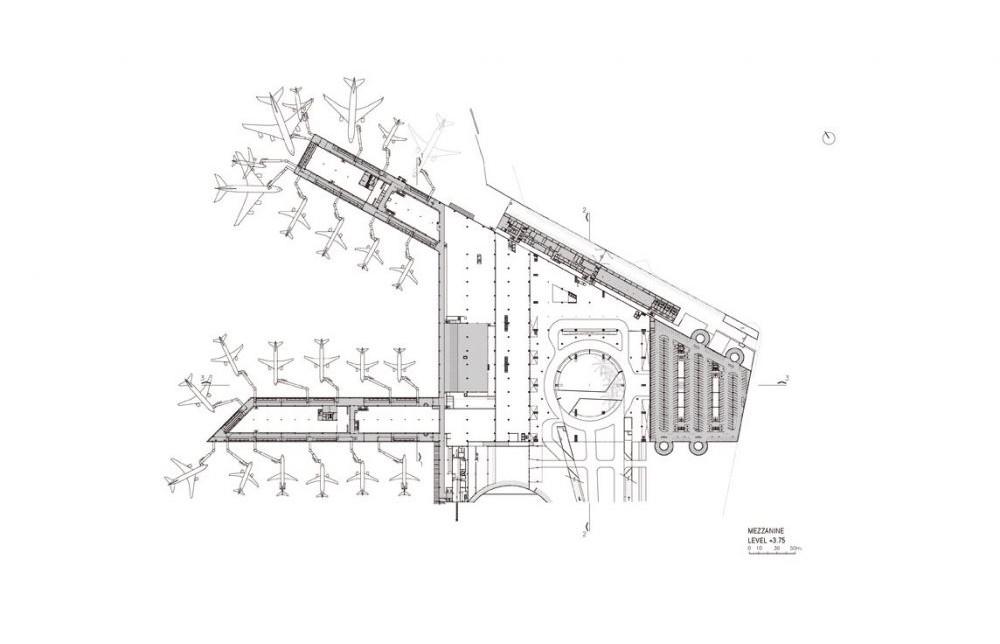 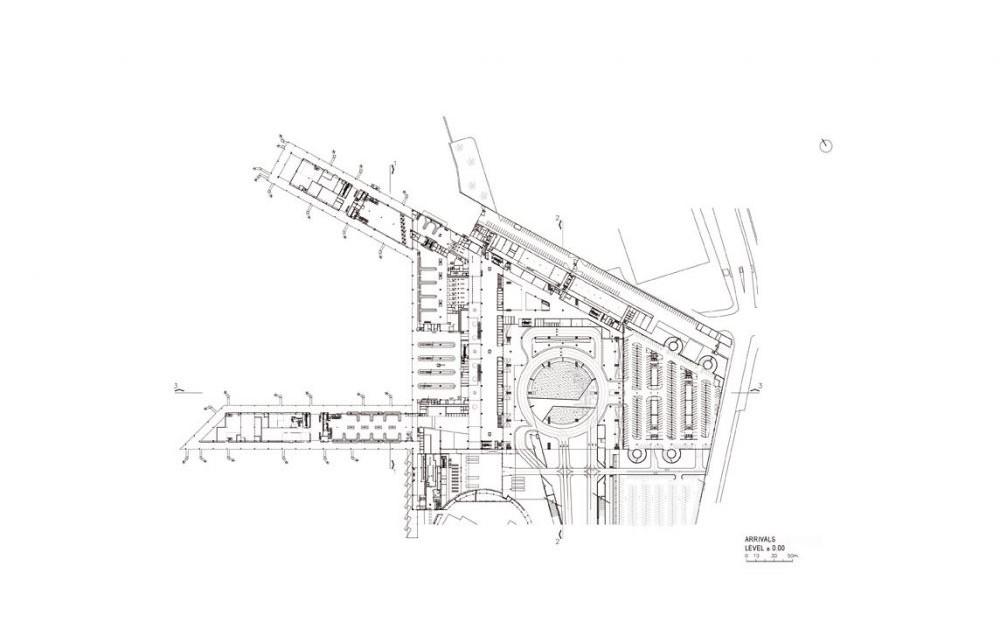 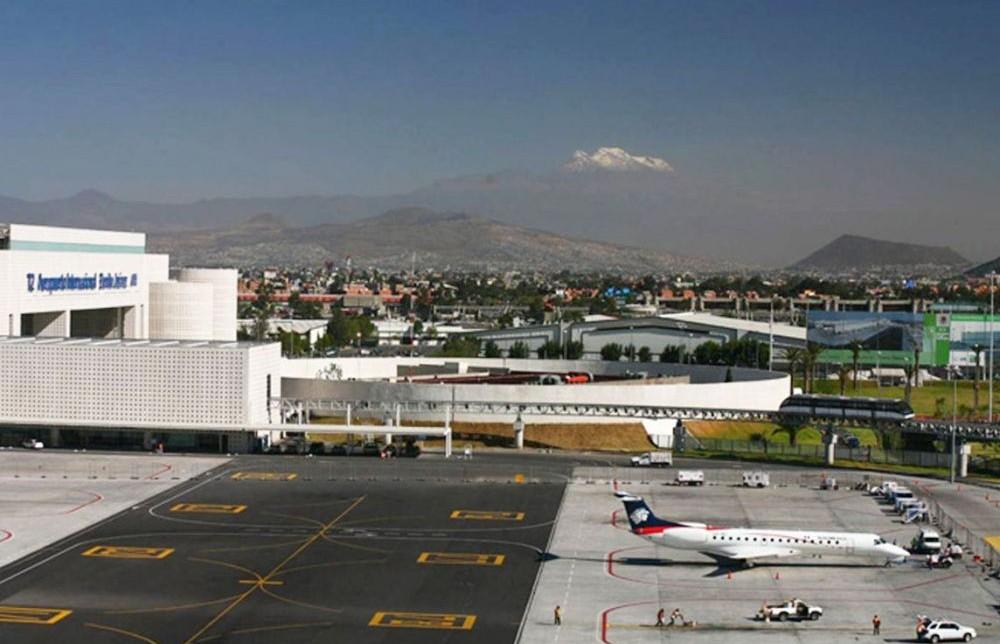 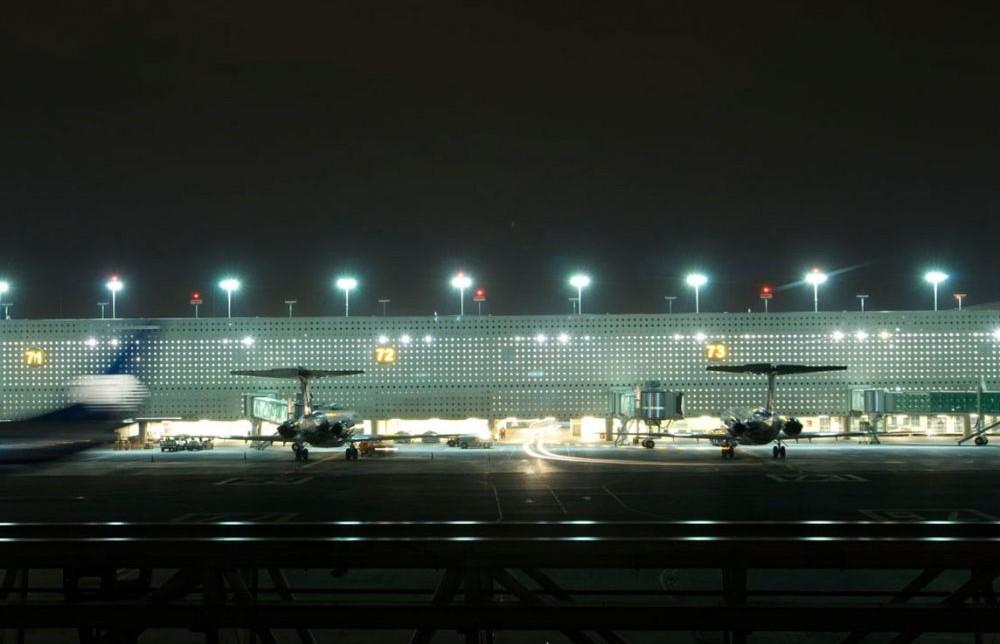 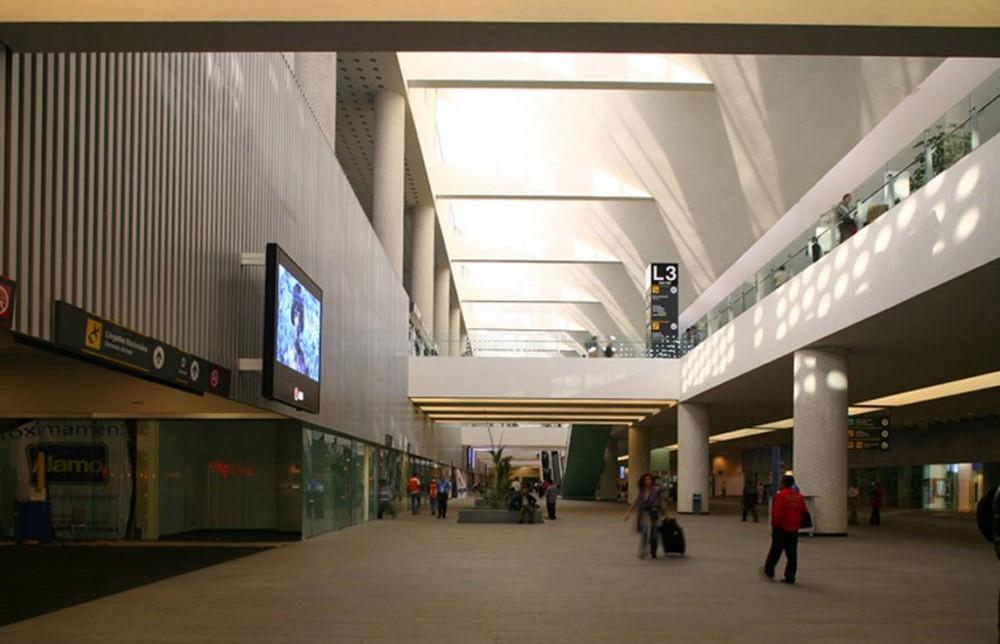 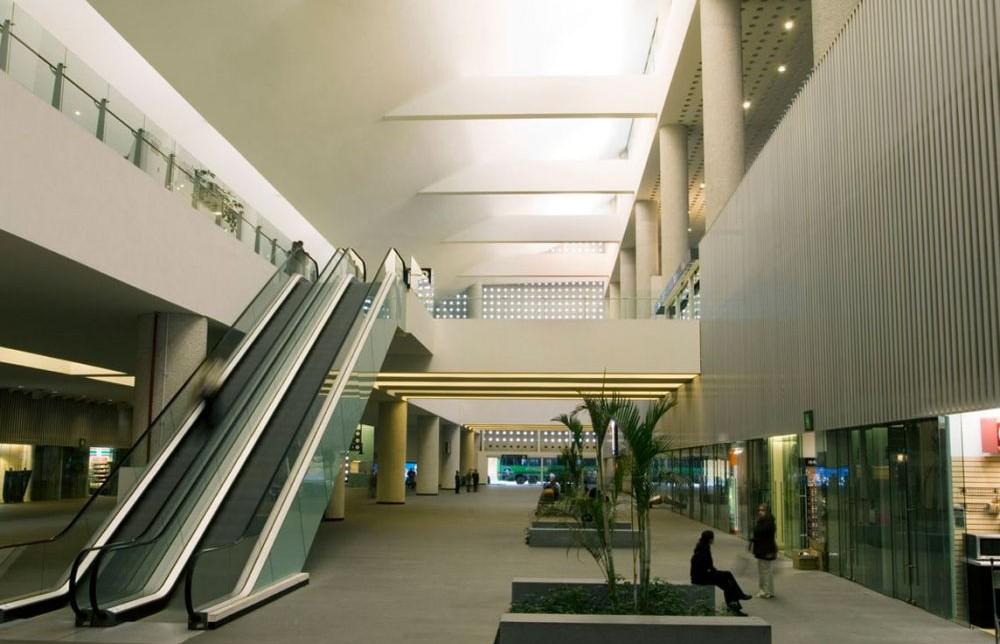 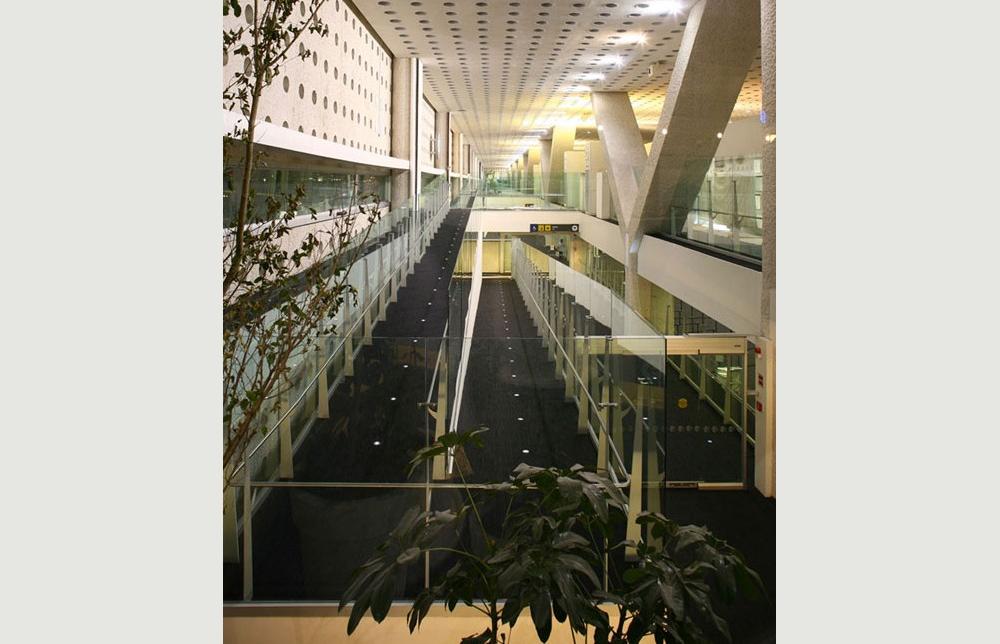 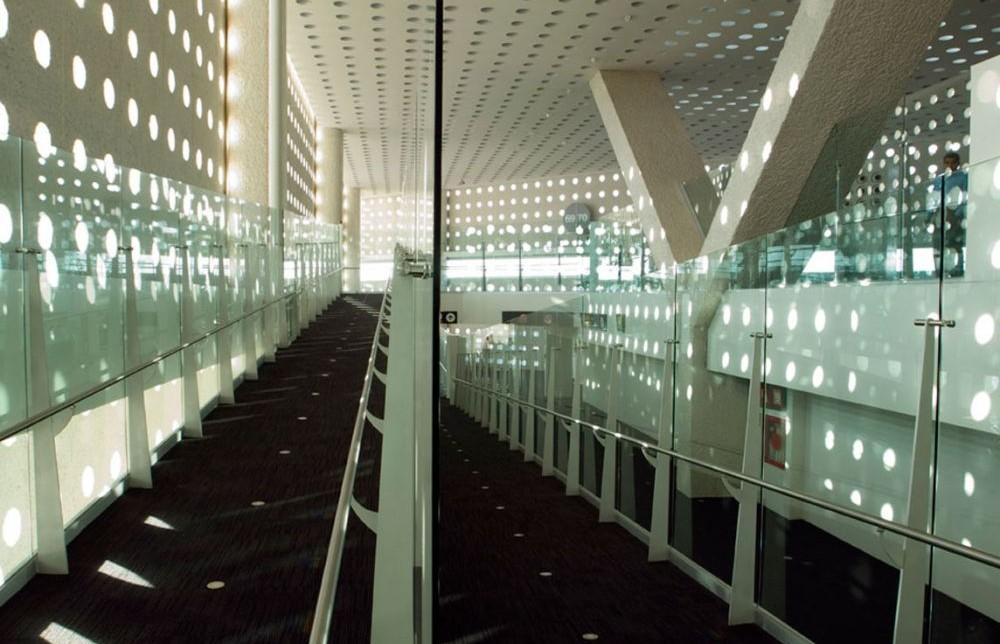 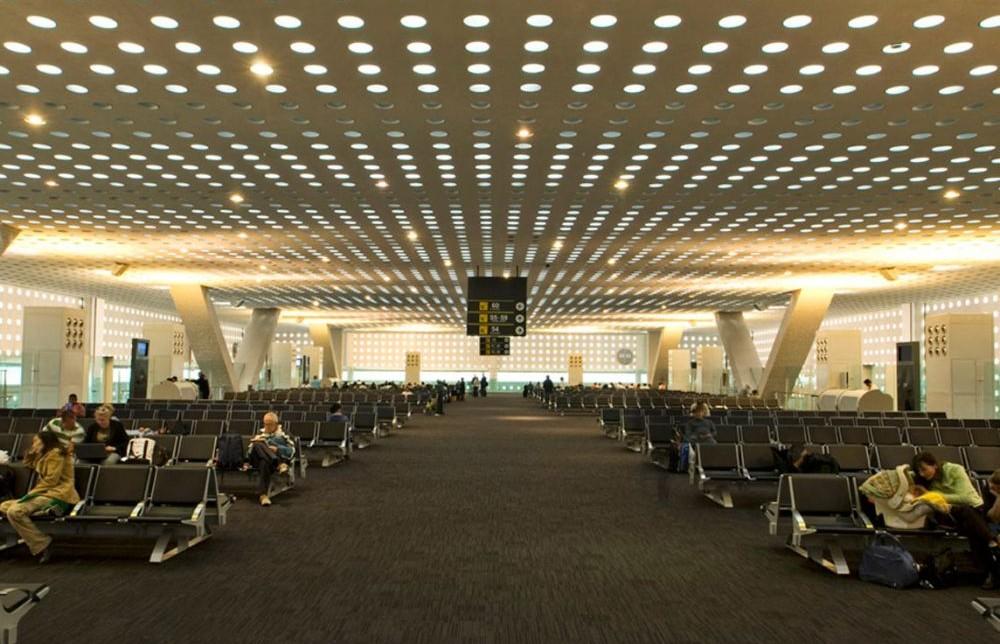 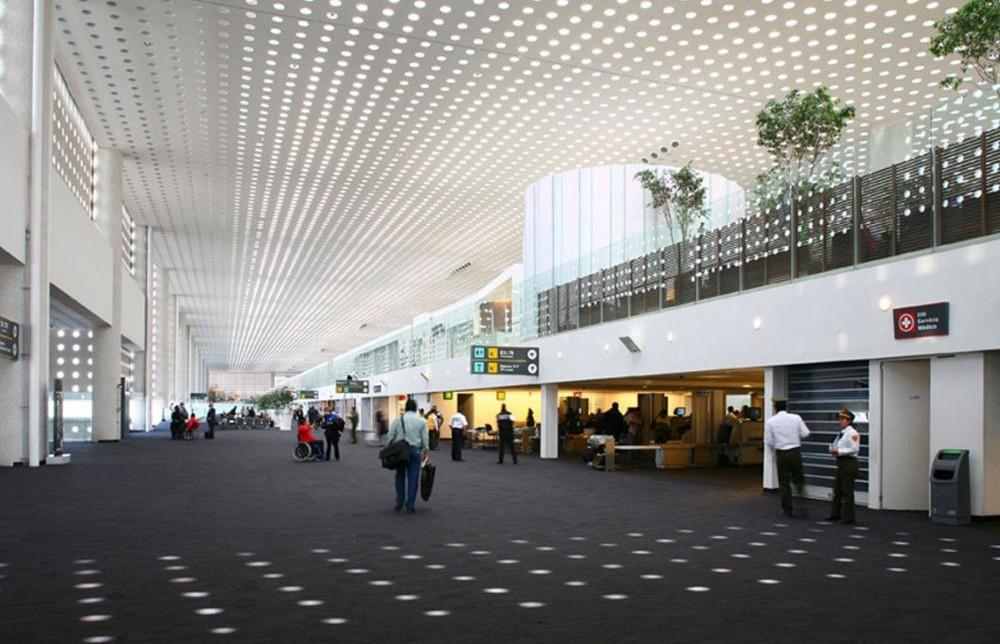 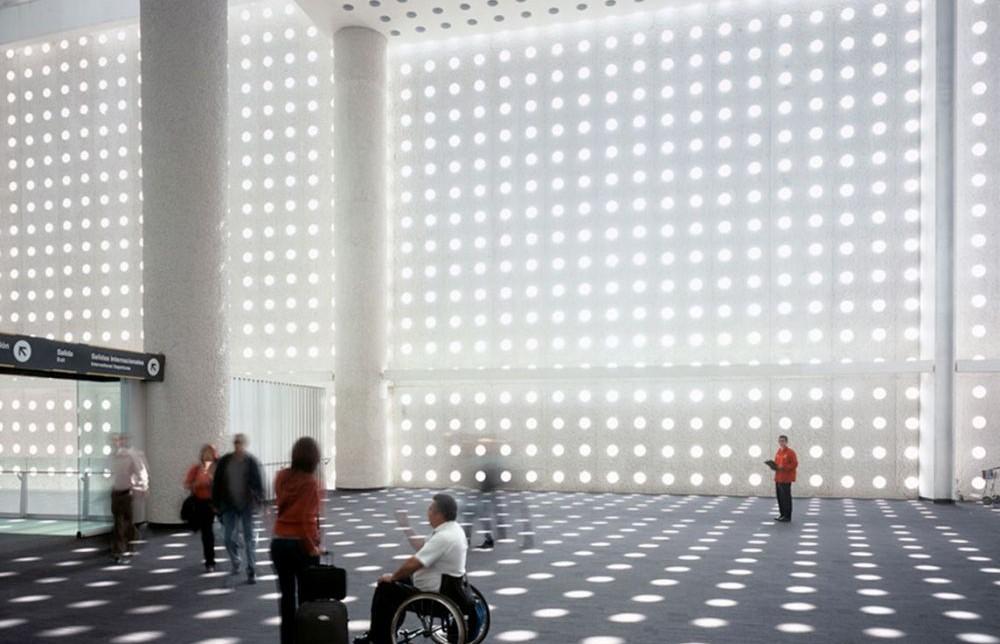 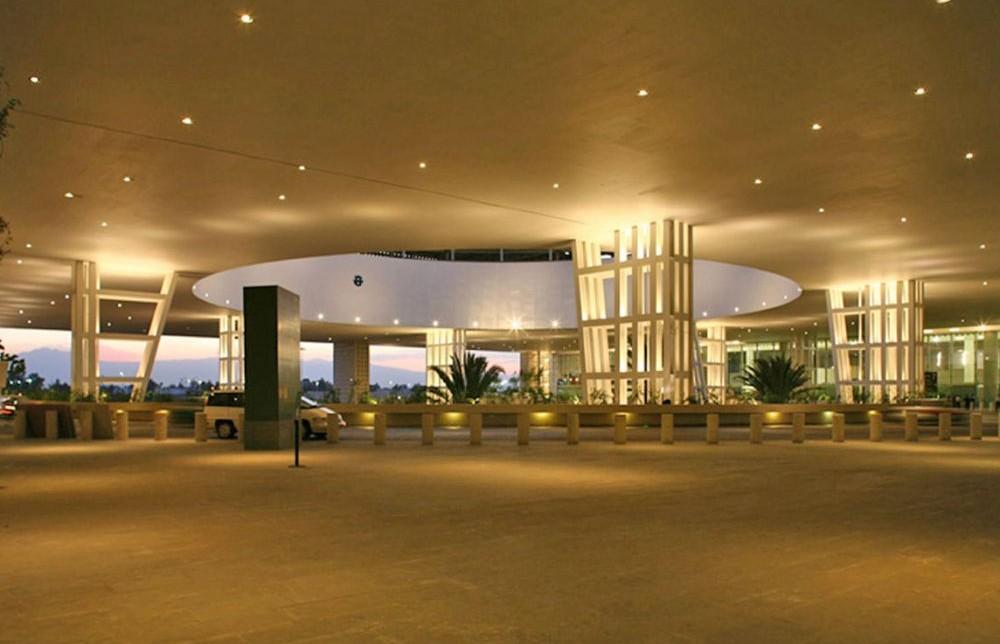 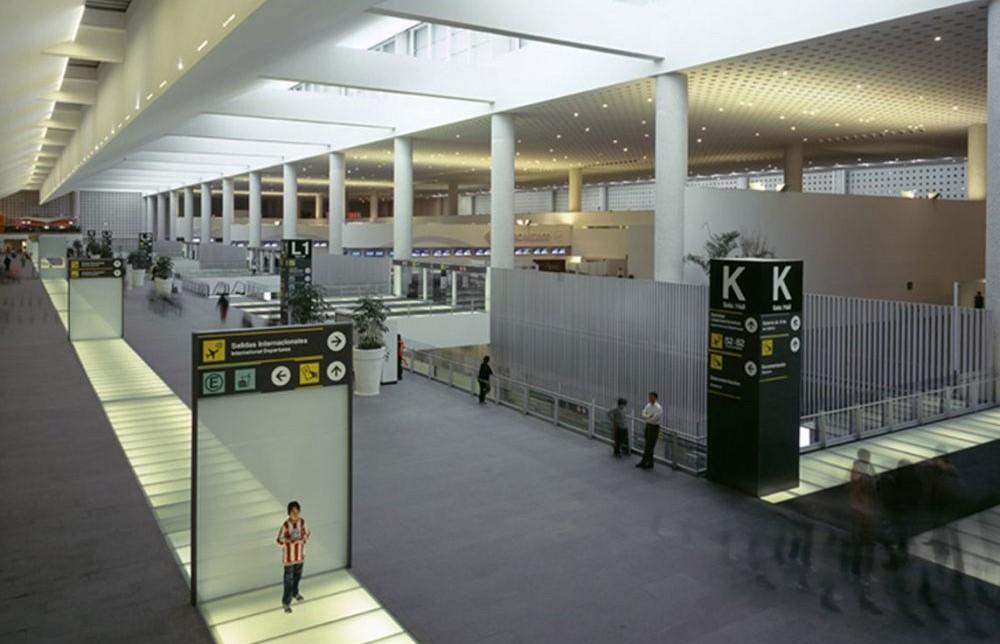 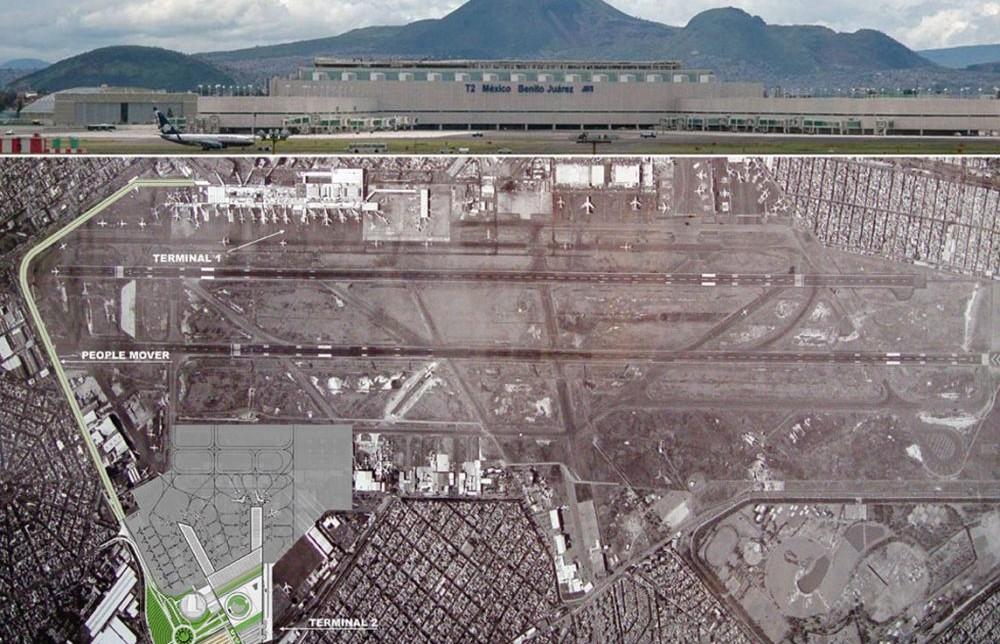 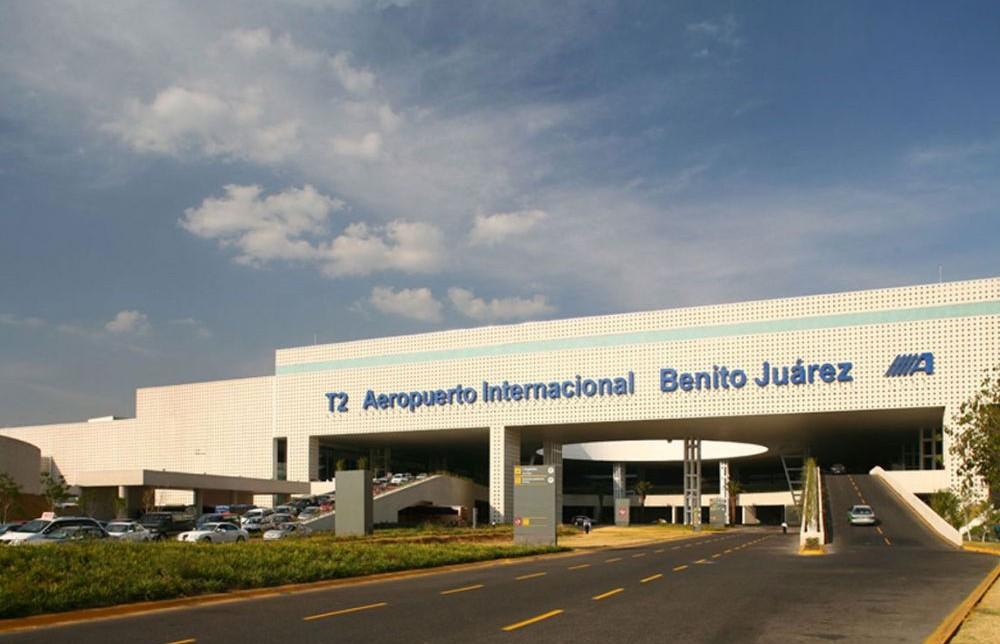 In response to the increasing number of passengers in Terminal 1 of the Mexico City International Airport, the federal government set up a Metropolitan System of airports with the objective of making the fullest possible use of the airport infrastructure of Mexico City and the surrounding states of Puebla, Morelos, Queretaro, and Estado de Mexico. It also proposed, among other improvements, the construction of a new Terminal 2, for which a national competition was held in 2004.

The new Terminal 2 is located to the southeast of terminal 1, on the other side of the runways. The location of the large building was determined mainly by an analysis of the platform, specifically of the position of the airplanes and their approaches. The complex consists of three interrelated parts: the terminal itself, with capacity for 12,000,000 passengers per year; the large frame 130 meters square with its circular aperture 65 meter in diameter and 5-star hotel 8308 rooms distributed over three upper levels; and the parking area. The enormous garden patio functions as a balcony overlooking the city and as a lobby. The various aspects of the program are organized by this green space: the four-story, u-shaped terminal building with its 23 boarding positions international flights along the north finger and domestic ones along the south; the bus terminal; and the seven-story parking building, with capacity for 2,500 vehicles, plus 900 more outside.

The terminal building is the heart of the megacomplex. The priority of creating a sense of expansive comfort for passengers was achieved by various means. First among them is the spaciousness of the large two-level hall, with its gardens, cafeterias, restaurants, shops, and services. A fundamental theme of the design is the constant supply of natural light, which filters in through the large window panes and the circular perforations in the walls and false ceilings there are domes on the roof without overheating the building. Natural ventilation also contributes to the sense of well-being, with air conditioning used only in the boarding areas. Arrivals both domestic and international are on the ground floor: passengers go through immigration, customs, and the baggage claim in the north finger before reaching the large hall. In the south finger reserved for domestic flights they pass through the baggage claim alone. The upper floor is for departures: after check-in, passengers go through the security control into a pre-boarding area equipped with shops, services, and restaurants. The final boarding areas are located on both fingers of the upper floor of the U-shaped volume. The runways are visible through a glazed incision that runs the length of the interior facades. The energy-saving air conditioning system in this part of the building affects only the first three meters above floor level. Arriving and departing passengers are separated on the mezzanine level: glass-enclosed ramps lead departing passengers to the transparent gangplanks to board the planes, while escalators and elevators carry arriving passengers down to the ground floor.
Unity is achieved by means of the facades of white chiseled concrete with marble aggregates. These low-maintenance pre-poured segments from 6 to 15 meters long, 1.5 meters wide and 20 centimeters thick are perforated with circular holes 30 centimeters in diameter. They were produced on the airport grounds, making it possible for the building to be constructed in only 28 months.
The structure is a combination of steel and concrete, which also made for rapid execution. Owing to the low resistance and gradual sinking of the area around lake Texcoco, piles 63 meters deep in some cases, joists, and slabs were used for the foundations of the U-shaped volume, the great hall, the patio and the parking level.
Terminal 2 has a data center controlling services such as water, electricity, voice and data, and closed-circuit television. In conjunction with the general efficiency and quality of its spaces, this makes the building the most modern terminal in all of Latin America.
To facilitate communications between the two terminals there is an air-train reserved for documented passengers, airline staff, and other airport suppliers. The new terminal will increase the airports capacity from 24 to 36 million passengers per year, making it one of the principal ports of arrival and departure in the country.