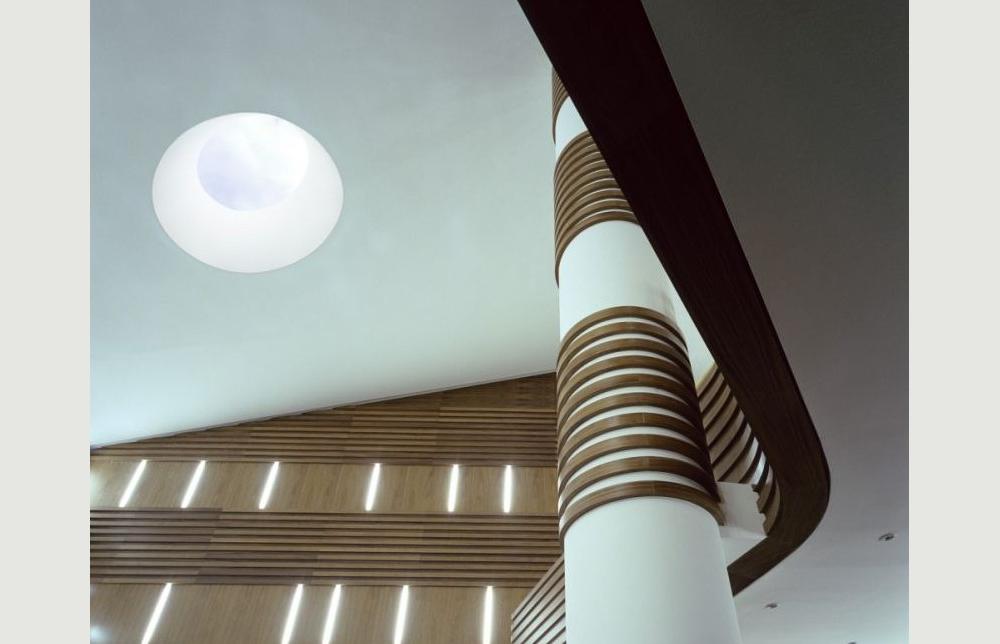 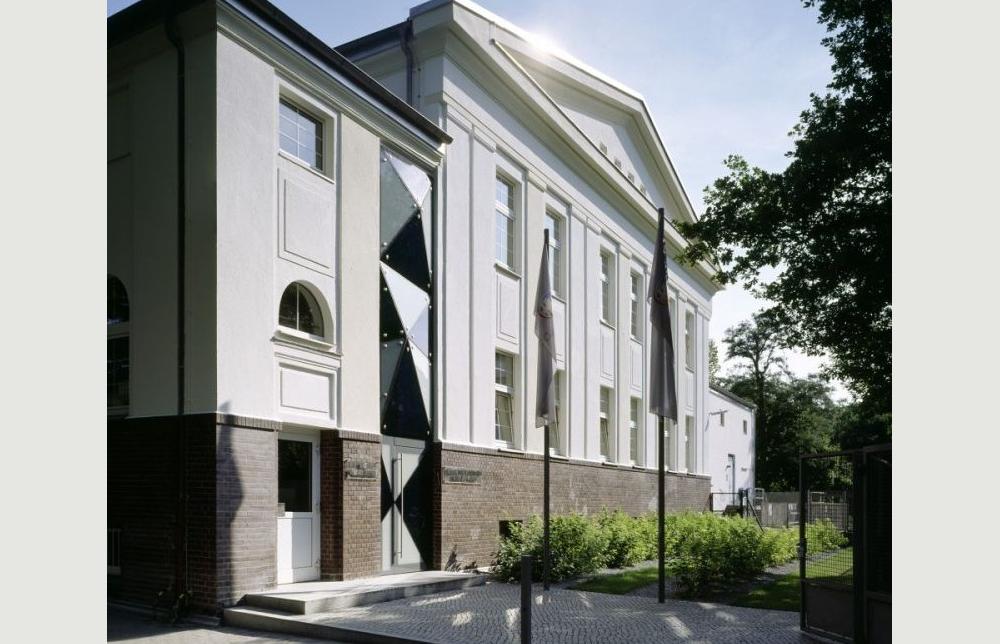 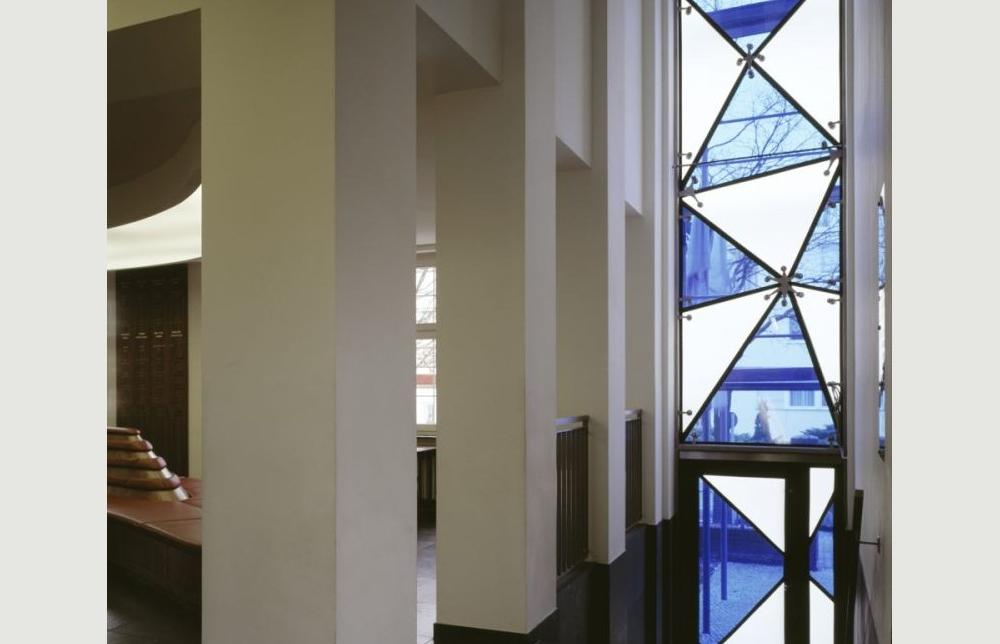 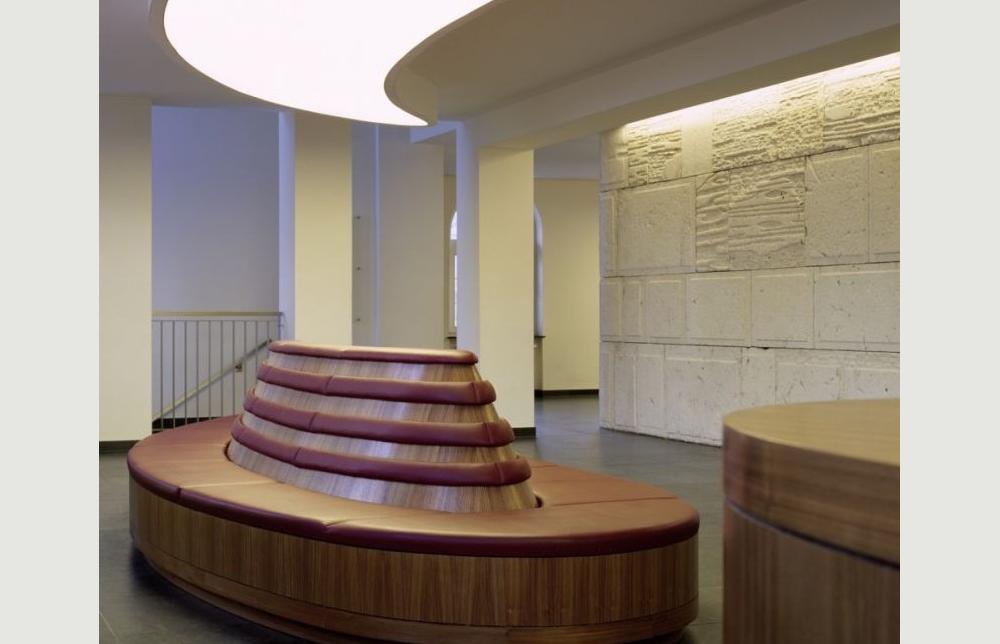 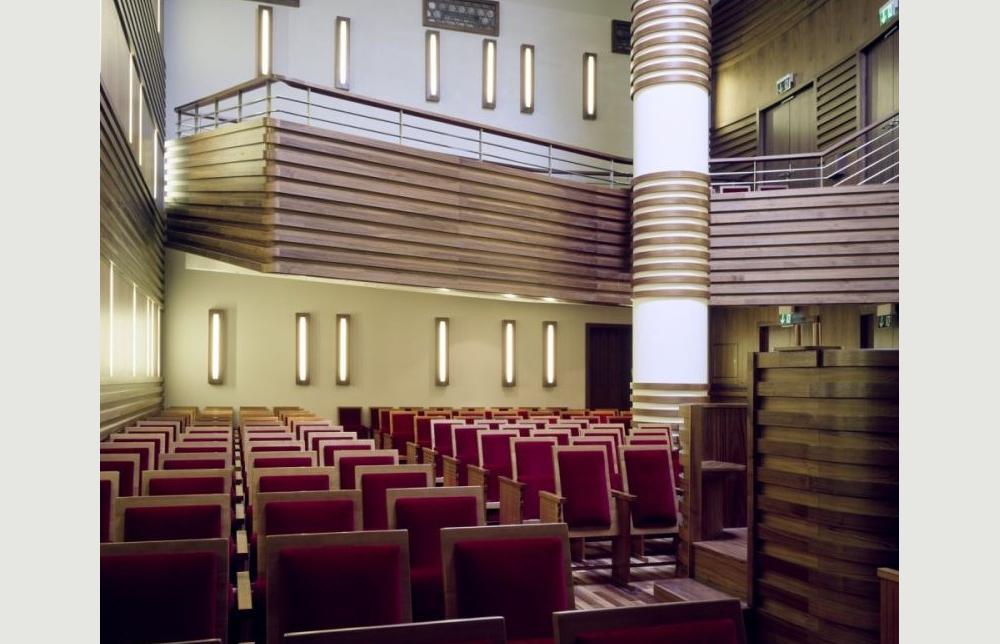 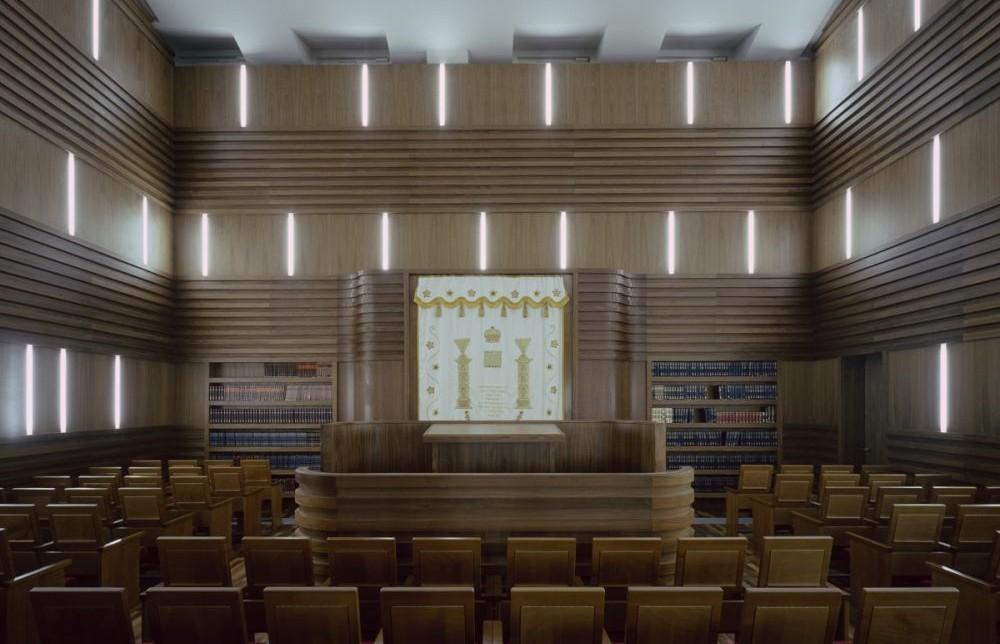 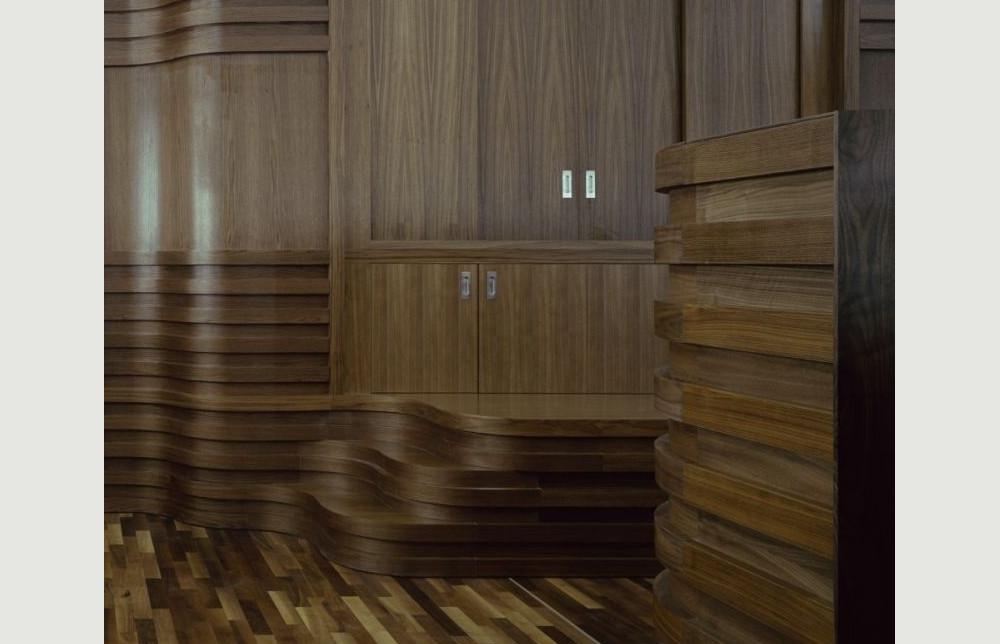 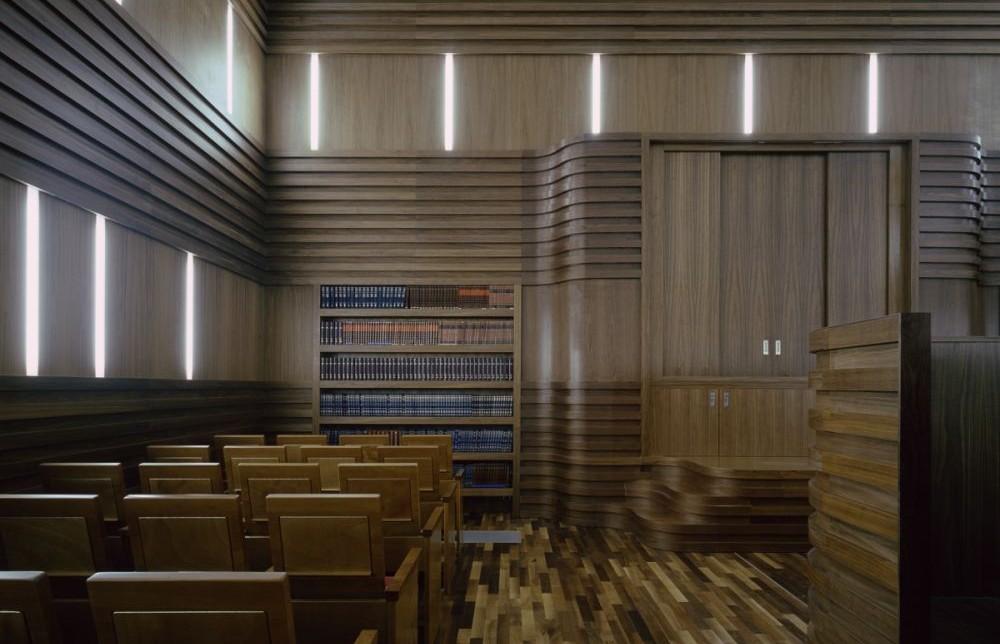 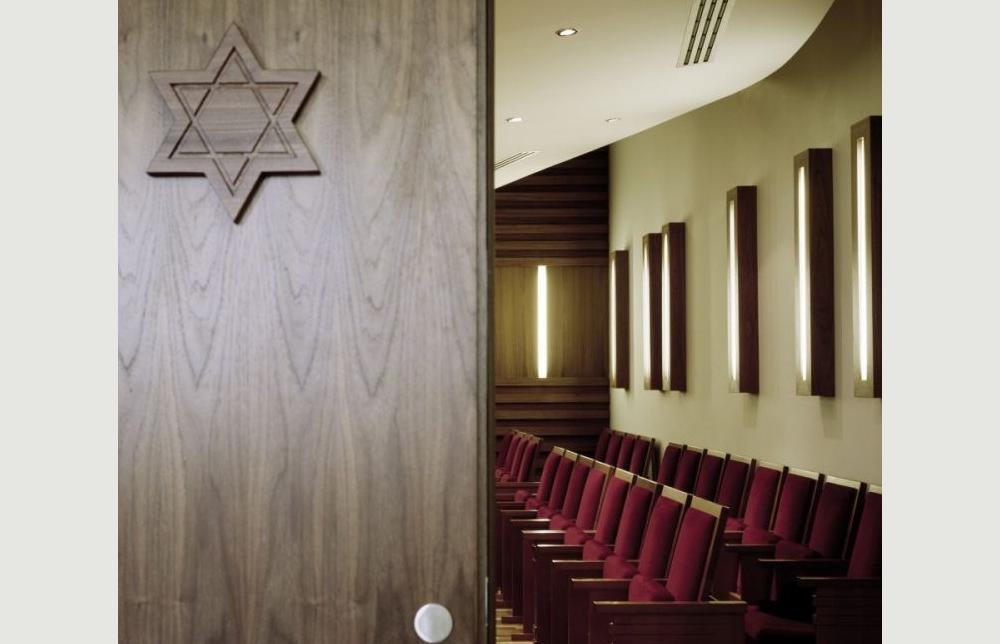 The building was erected in 1922 by Otto Hanke as a substation, transformer station and later converted into a lighting laboratory. The bright neo-classical façade of the building is fitting to the style of city’s prestigious residence area near Kurfürstendamm. Therefore, the two-story front facade does not reflect the originally technical use of the building. The building was bought by a Jewish foundation in 2004 and is now being rebuilt and provided to the Jewish-orthodox society “Chabad Lubawitsch” for the next 99 years.

The building envelope remained the same except for an added modern portal, yet the interior was considerably changed. The originally transformer hall was converted into an orthodox synagogue with the traditional Jewish ritual bath, the Mikwe in the basement. Seminar rooms, a library, a room for children’s services, a café and a festival room with attached kosher kitchen offer room for miscellaneous religious and cultural events for members of the Jewish community and its visitors from around the world.

The entrance hall impresses by its interior and looks like an independent lounge. The additional facilities such as a Judaic-shop, reception and seating are freely arranged in the shape of dynamically designed objects. The connecting wall between the synagogue and the foyer is covered with monolith sandstone plates reminding of the Jerusalem’s Wailing Wall. The synagogue, a peaceful harmonious hall is the spatial, spiritual and cultural centre of the complex. Its character is determined by the dark floor-to-ceiling walnut paneling which appears compact despite its horizontal fl owing structure. The three-story hall appears well-proportioned and balanced; its roof is supported by a single pillar standing asymmetrically in the room. Functional elements such as the shrine for the Torah scrolls and the separately accessible women’s-gallery seem to be growing out of the pillar. The inclined gallery is arranged in a tense distance from the round column and the walls and this helps to avoid the effect of horizontal cut of the space. An oval roof window in the ceiling of the prayer-hall establishes the symbolical spiritual connection between the man and the divine and is at the same time a light source. The other source of light offer back-lit lighting panels embedded into the walls creating a contrast to the dark walnut wood and the deep red of the seats maintaining a warm and solemn atmosphere in the hall.