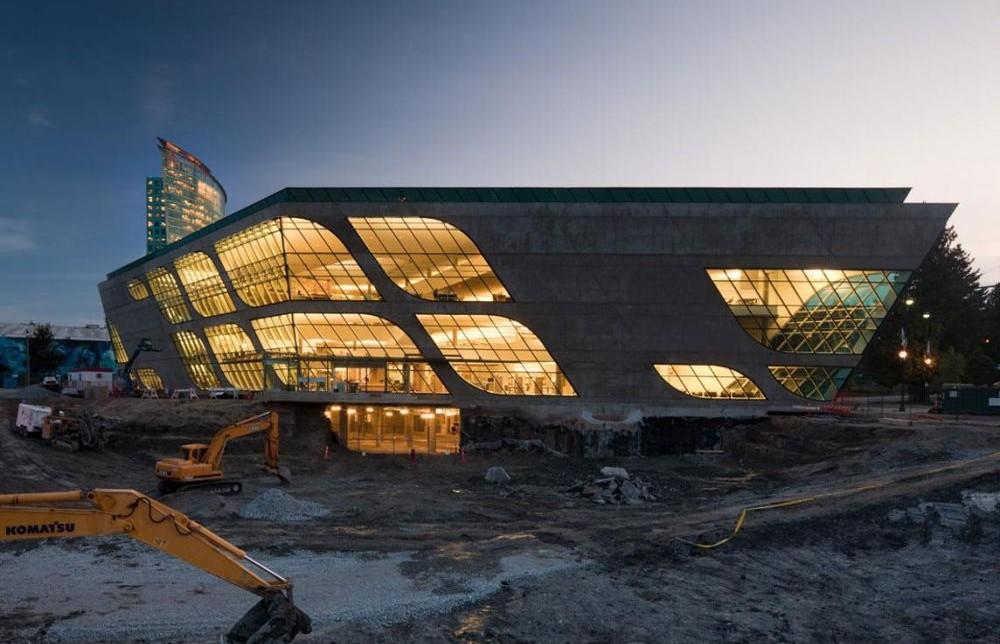 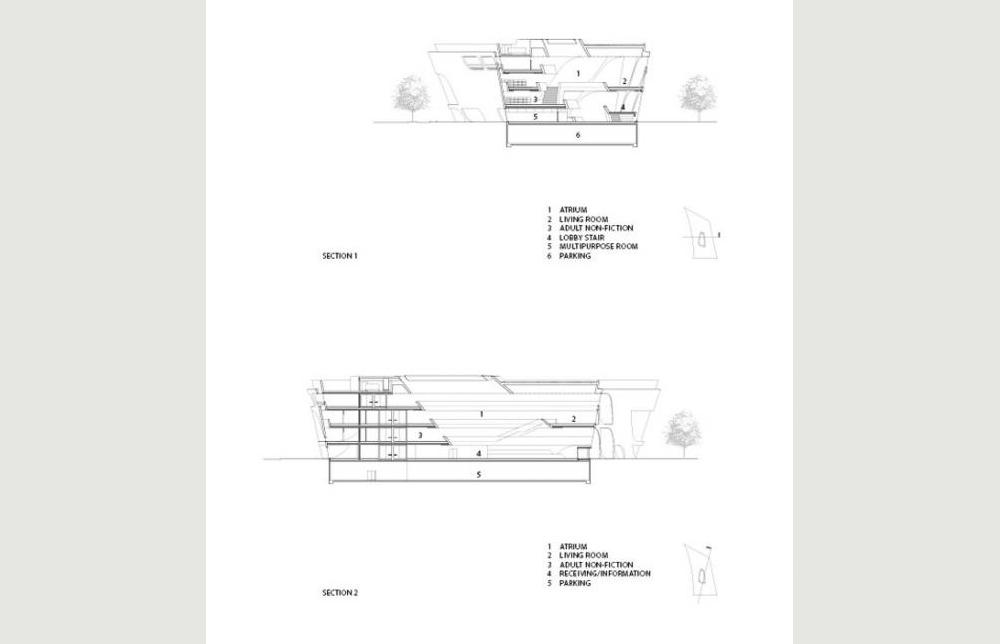 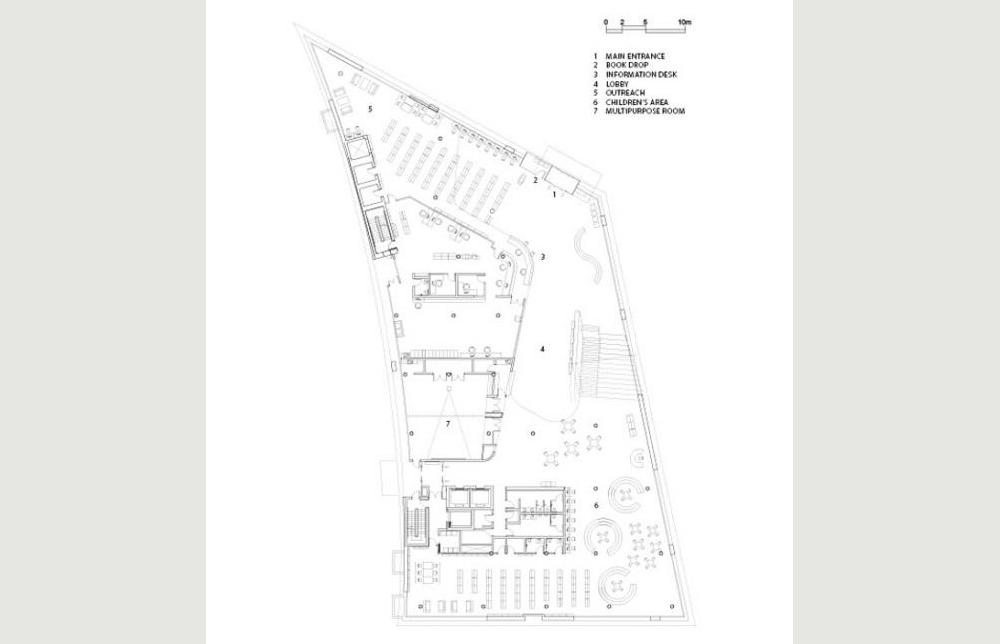 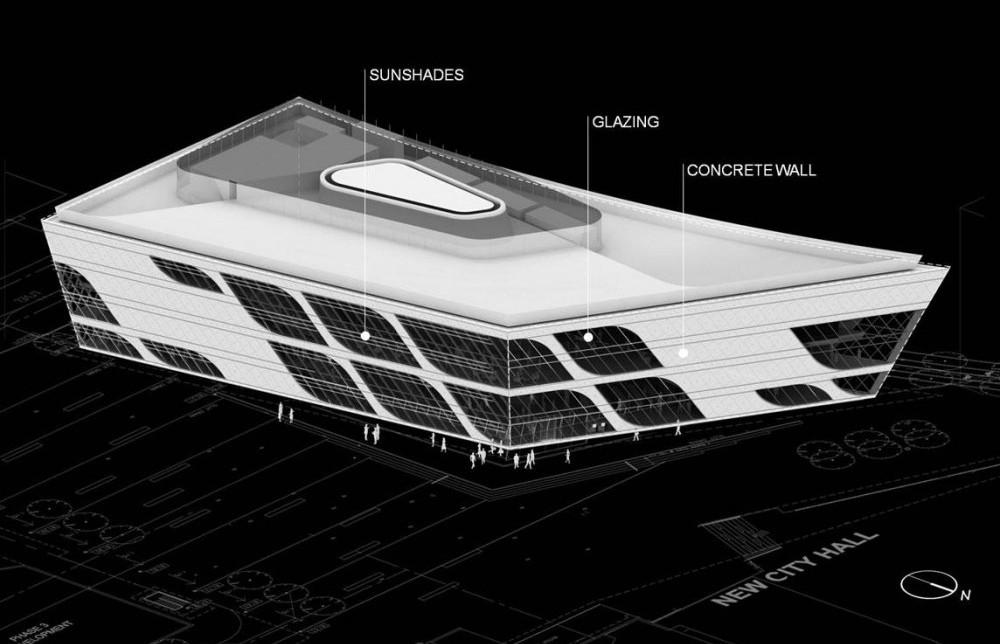 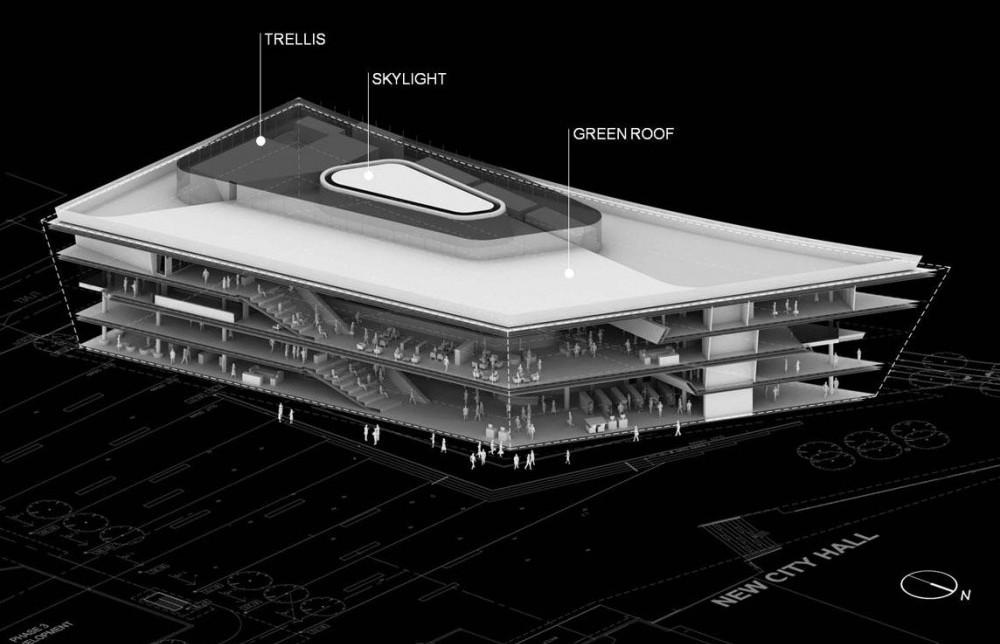 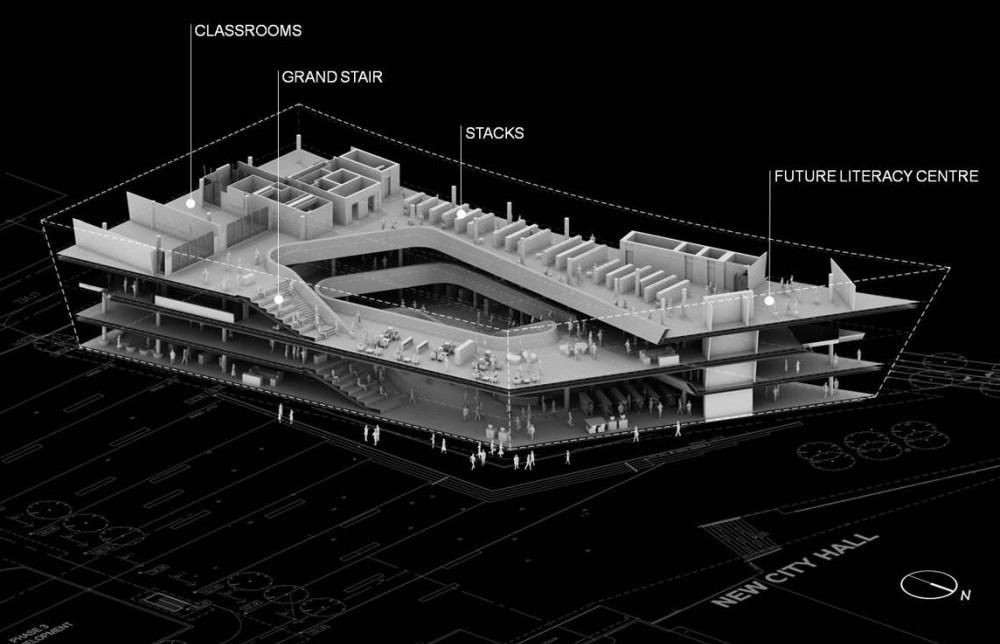 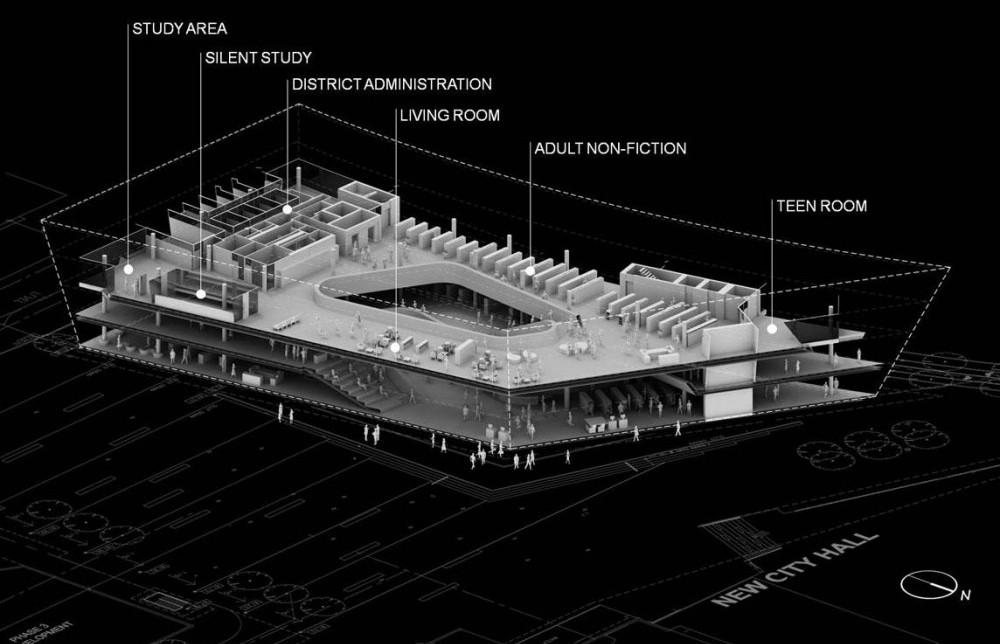 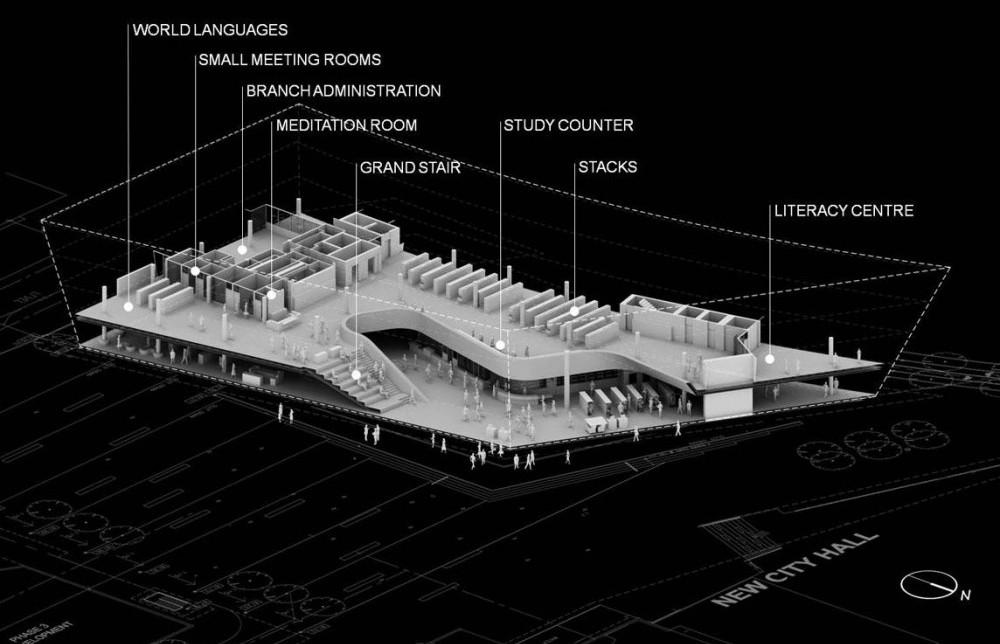 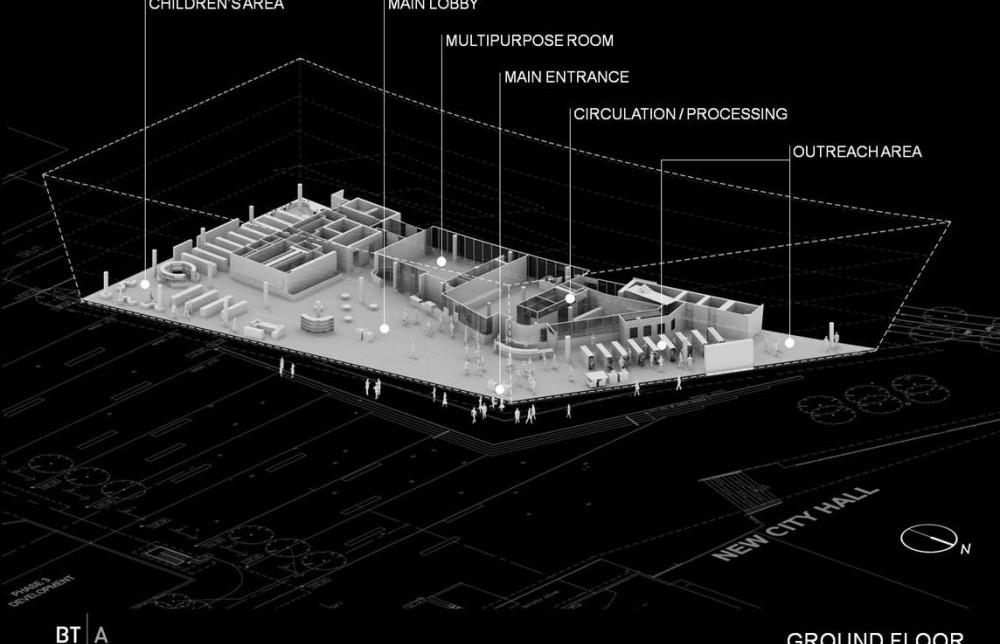 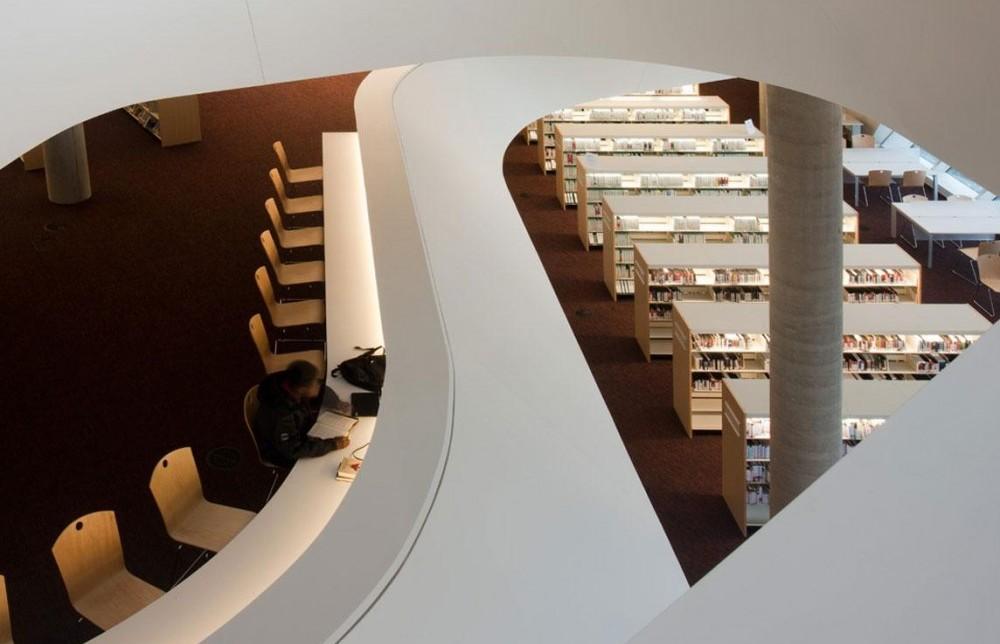 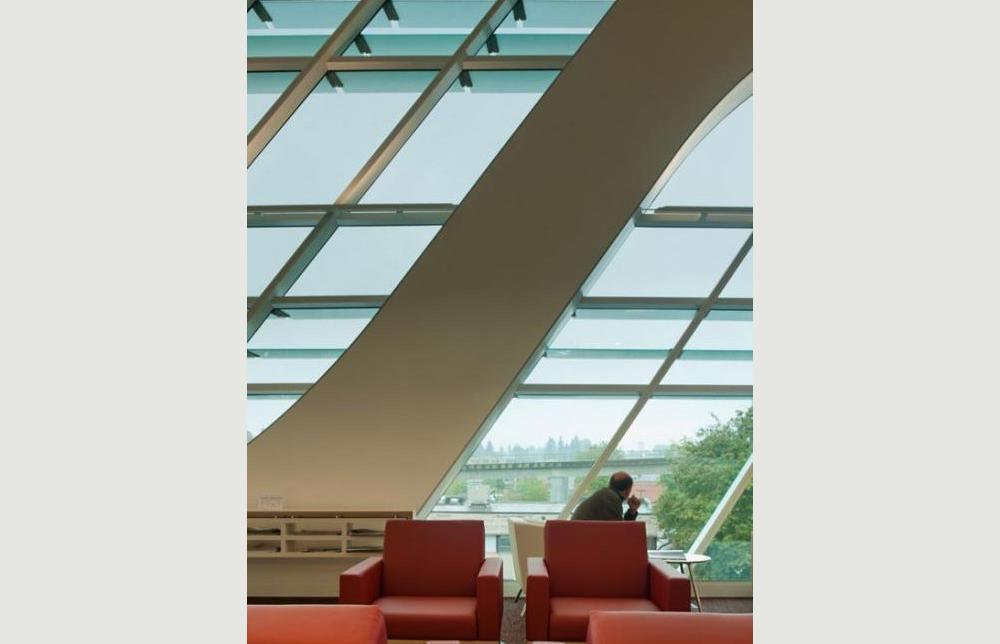 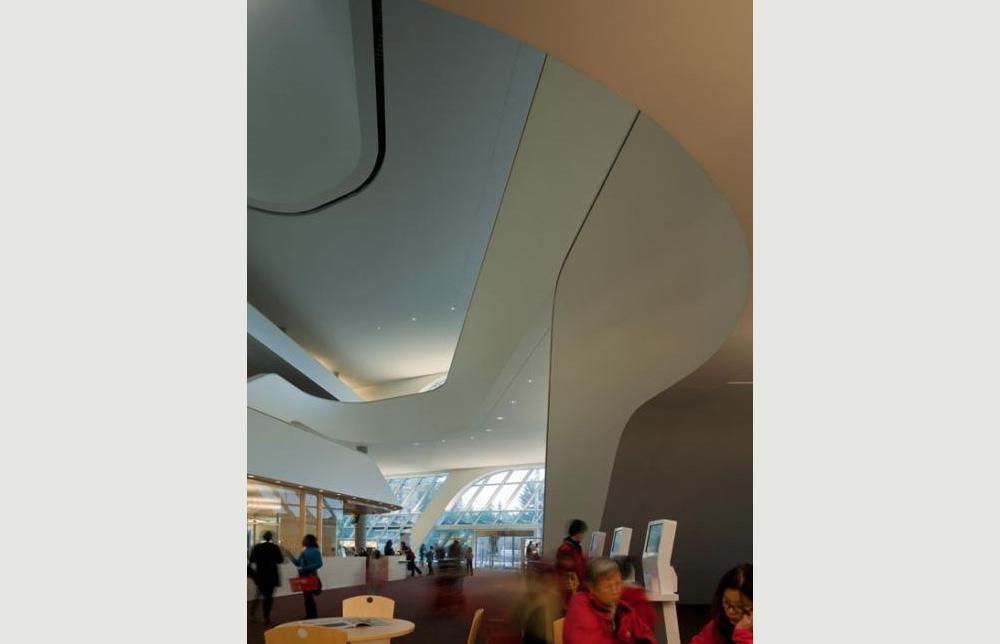 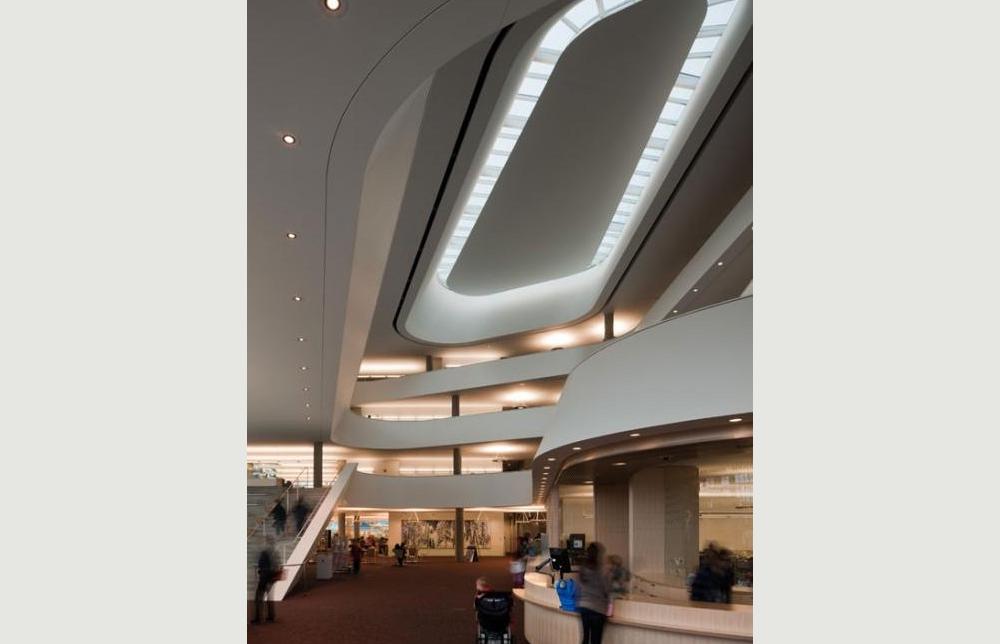 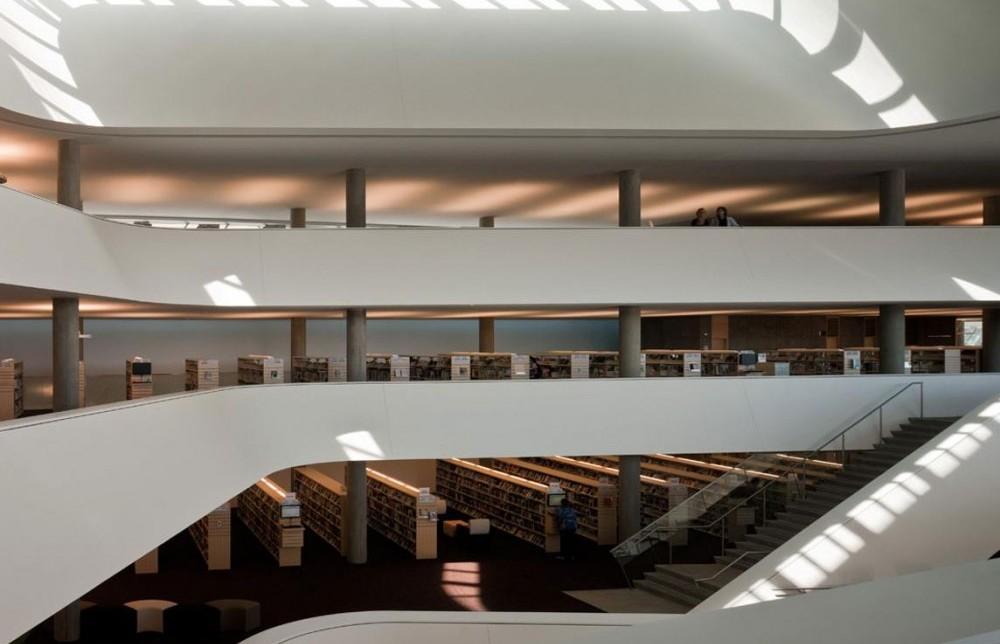 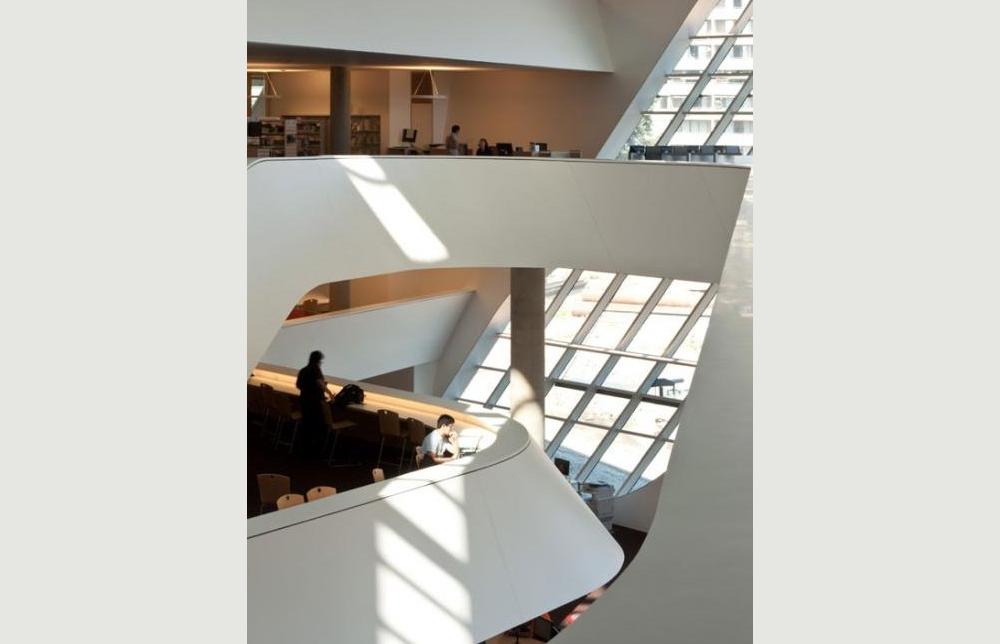 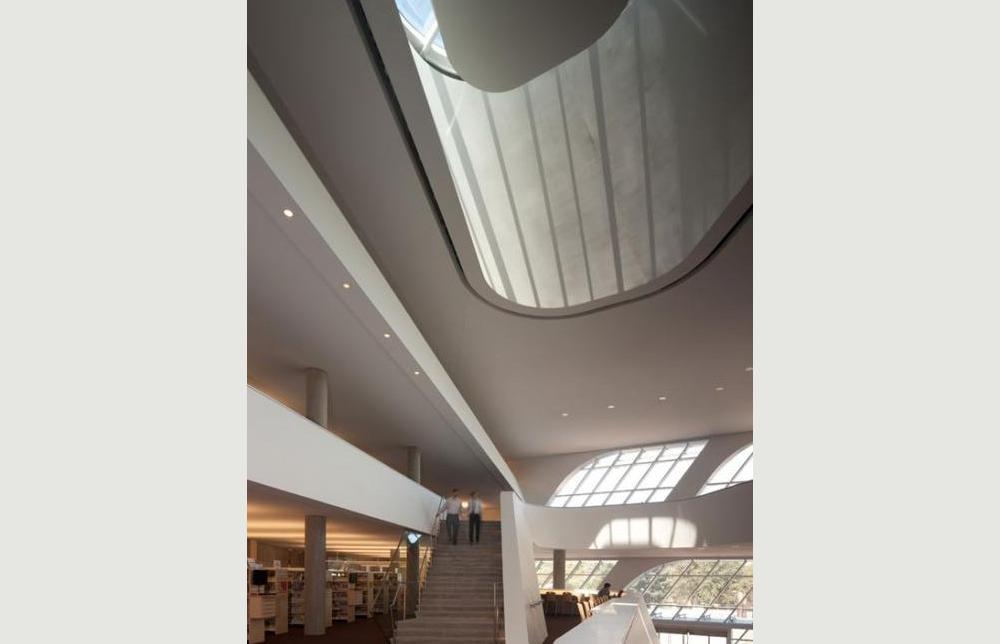 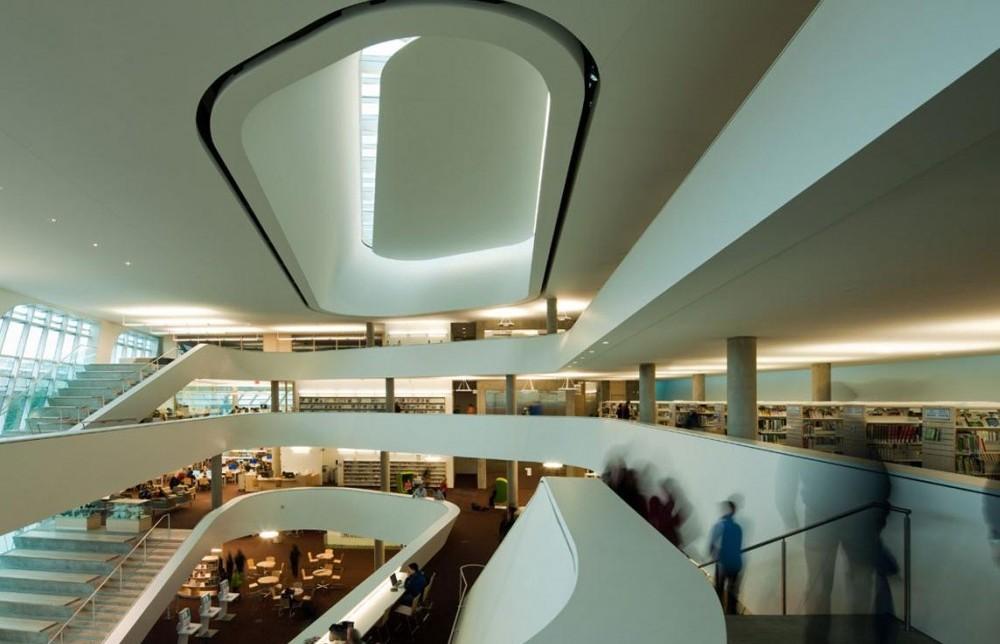 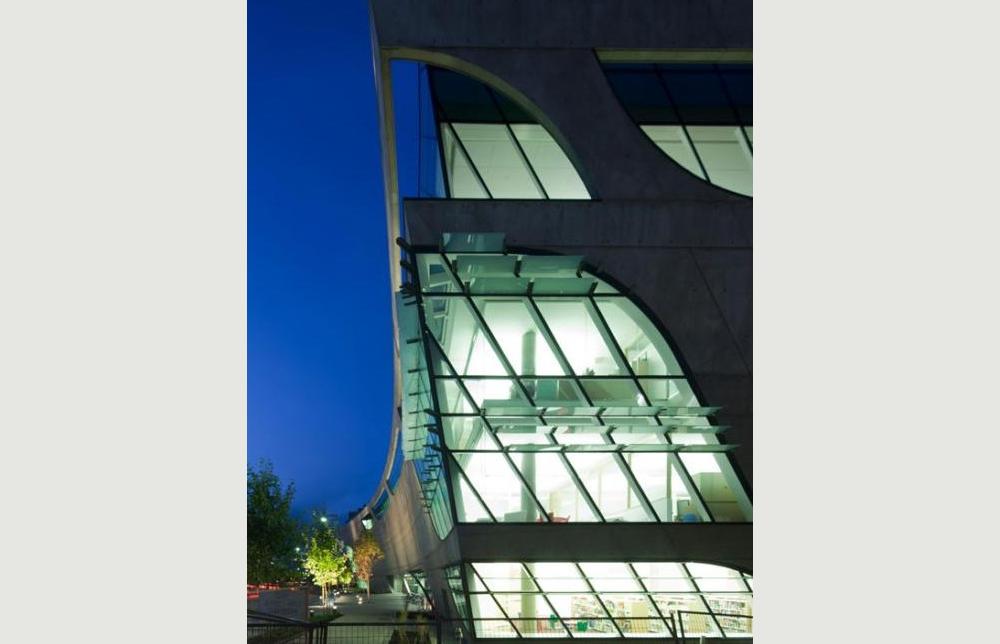 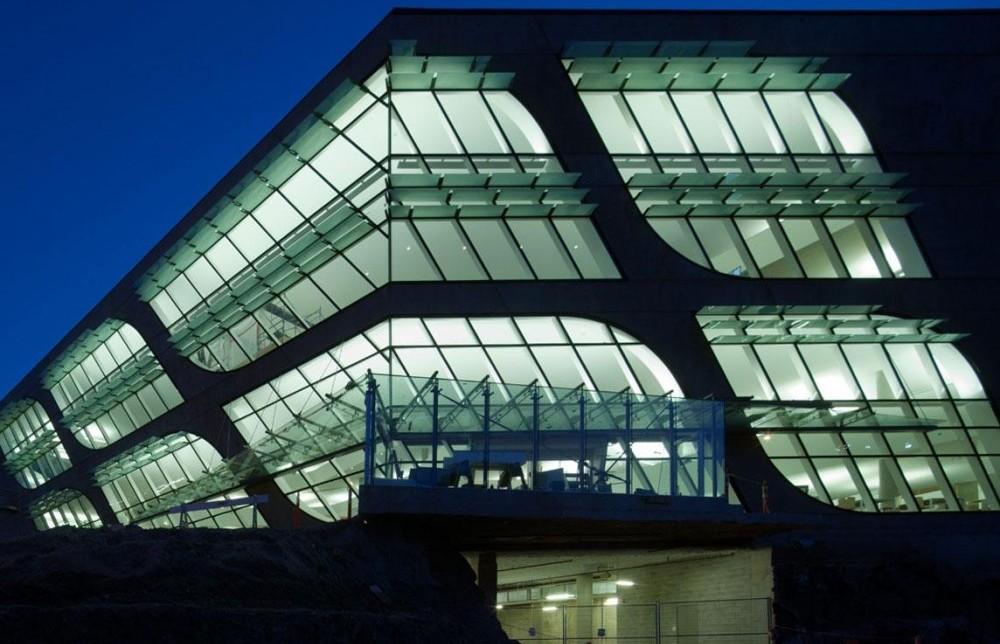 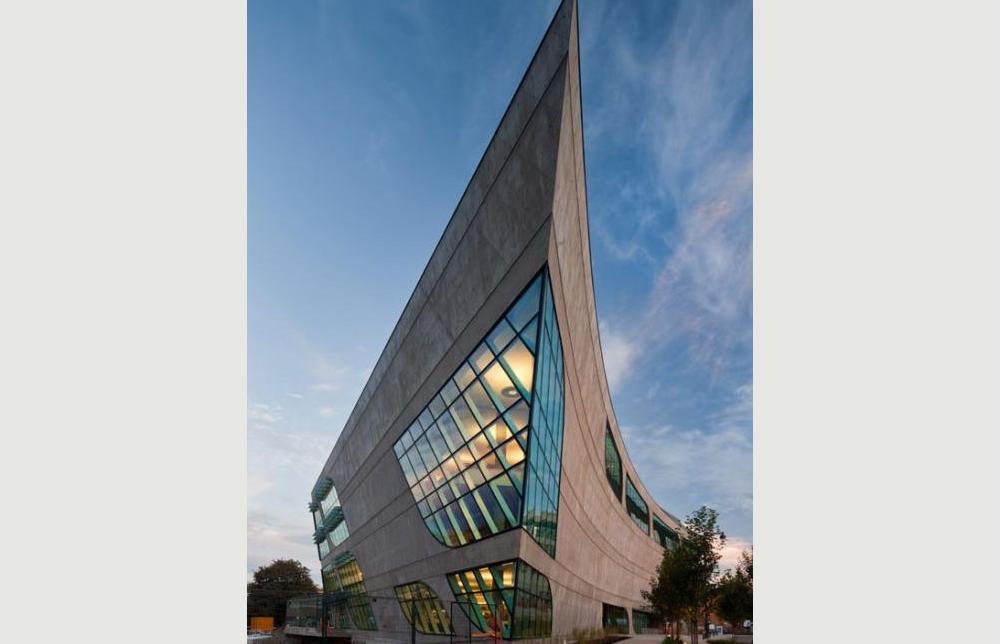 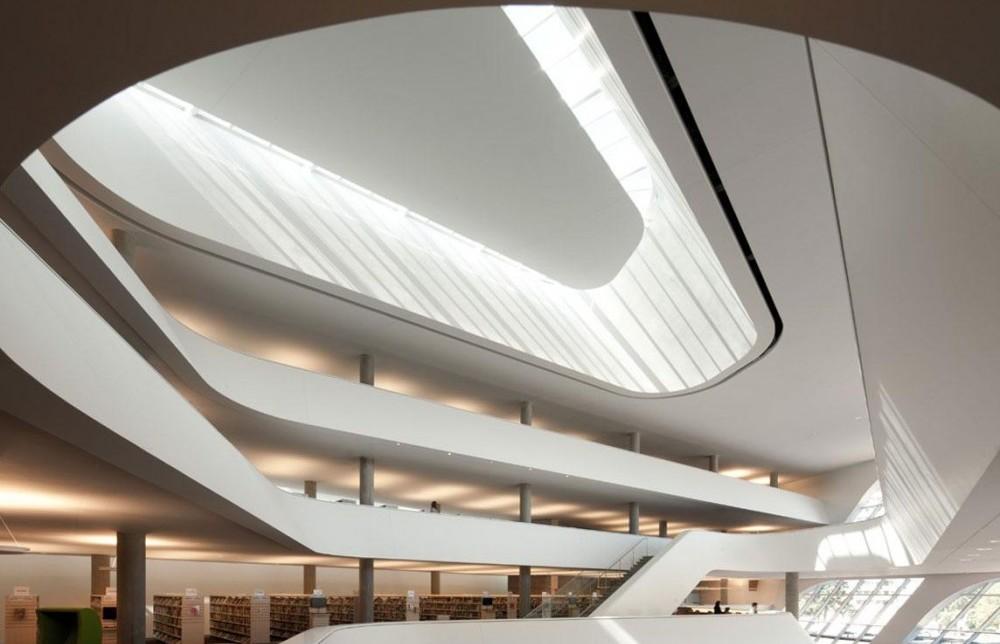 With advances in easily available electronic information, the role of libraries is changing and providing appropriate spaces for evolving library activities is now the priority. These activities range from the traditional research and education roles, to the need for libraries to become a point of connection and even a gathering place in the community. As a result, Bing Thom Architects’ design for the new Surrey City Centre Library includes a diverse mixture of large interconnected “high” spaces with generous natural light and “low” more intimate spaces to accommodate the book stacks and individual activities like studying and writing. These spaces are scattered and modulated throughout the complex, revealing themselves as the patrons explore the building. One of the most dramatic spaces is the “living room,” a casual reading area adjacent to massive windows overlooking a future public plaza to the east, a double height space that is not apparent until you reach the third floor. In all cases, the spaces have been deliberately kept informal to make the library feel like an extension of the patron’s home. As Thom says, “The design evolves out of the need to provide a space for reading, studying, and above all, gathering as a community. This building is very flexible and will accommodate all of these purposes, but does so in a way that will intrigue and entice the users through the building.”

The library encourages the gathering of diverse groups of people from the surrounding community. Its design features large windows, a welcoming entrance with clear sight lines that allow visitors to quickly orient themselves in the space, and an upward winding central atrium and two skylights that allow natural light into the building. The form of the building is inspired by the curvature of the adjacent University Drive, with an added dynamism provided by outward-sloping walls. While seemingly complex, by utilizing state of the art computer modeling software, the architects were able to ensure that the concrete formwork was highly efficient and easy to construct. The exterior concrete structure is carefully detailed as the final surface, thereby eliminating the need for expensive building cladding. Designed to LEED standards, the outward sloped walls also provide solar shading.

The $36 million library project was funded as part of Canada’s Federal Infrastructure program, with costs shared by the federal, provincial and municipal governments. Because of the time constraints placed on these federally funded projects, the firm went head-first into the use of social media to circumvent the standard (and lengthy) community consultation process. The end result is a dynamic design—one that recognizes and supports the changing role of libraries and that incorporates the needs of the client and the ideas of the community – but that also is coming in on time and on budget.

BTA’s social media ingenuity was born out of the need to compensate for a substantially shortened standard public workshop phase. The project was awarded to BTA in November 2009, the groundbreaking took place just a few months later in February 2010, and the opening is scheduled for September 2011 –in total less than two years from start to finish. Traditional public meetings can take months, so BTA developed a social media strategy using blogs, Facebook, Twitter, and Flickr to speed things up. BTA worked with Surrey librarians to create a blog on the library website which, in turn, was linked to a Flickr site where BTA posted photos of libraries and other spaces the firm liked. Members of the community were encouraged to post comments and photos; those who did not have a computer or experience with social media went to their local libraries where librarians helped them voice their opinion.

The resulting, innovative design of the library reflects this collaboration, and incorporates the needs of the surrounding community, as well as the demand for libraries to adapt to the way we live and work today. With a grand, center atrium and the requisite private study areas, the design includes a large community multipurpose room that will accommodate 120 people, a computer classroom, a meditation room, and a teen lounge and gaming area.