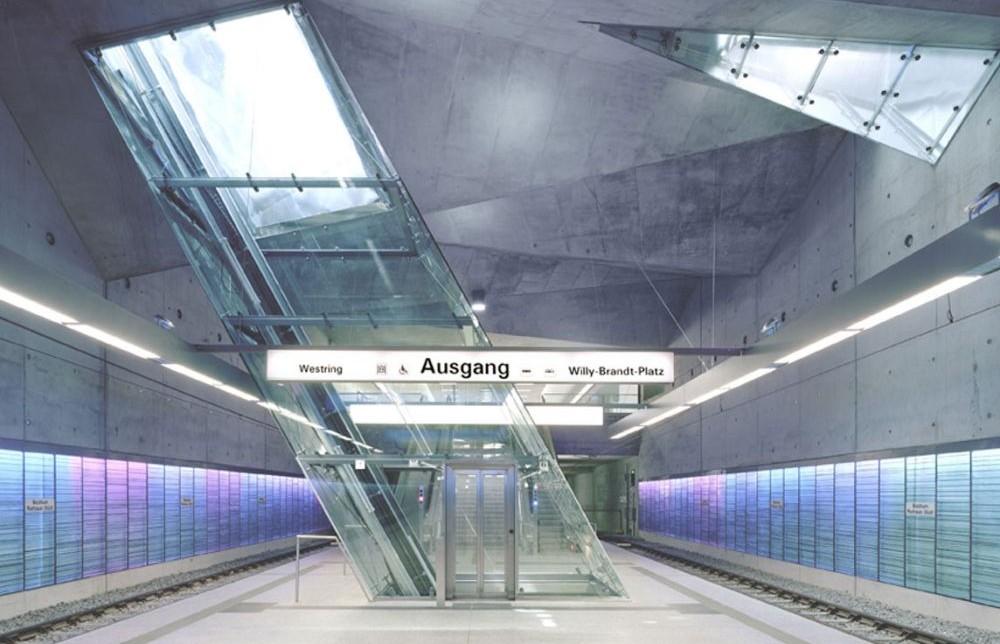 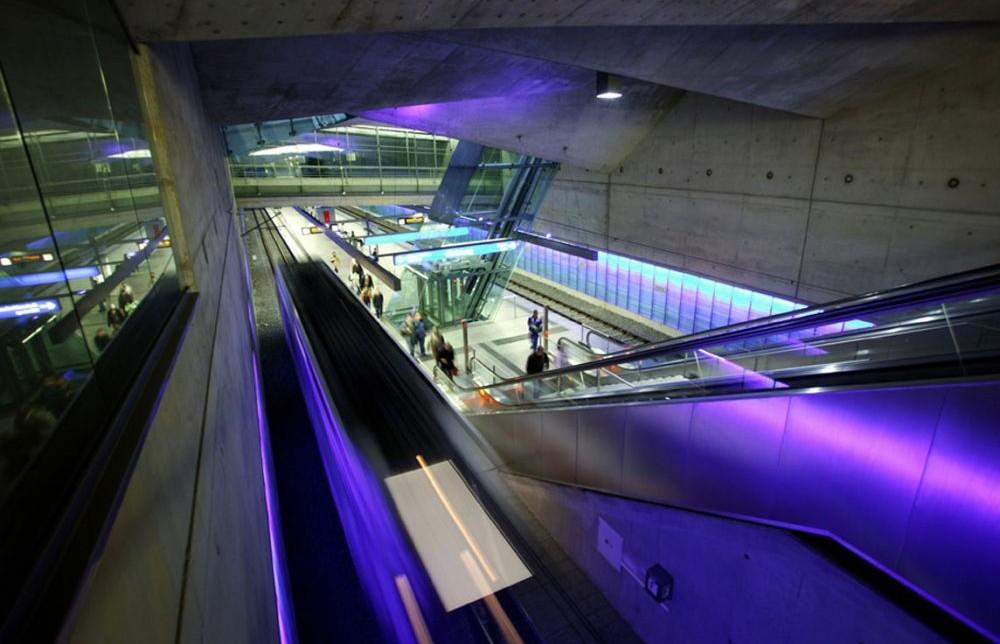 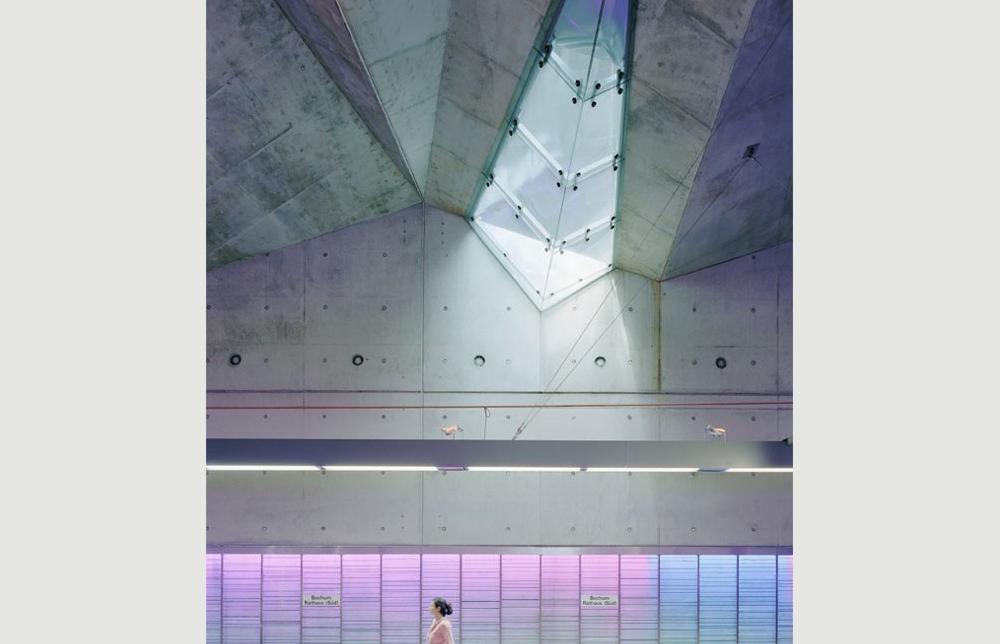 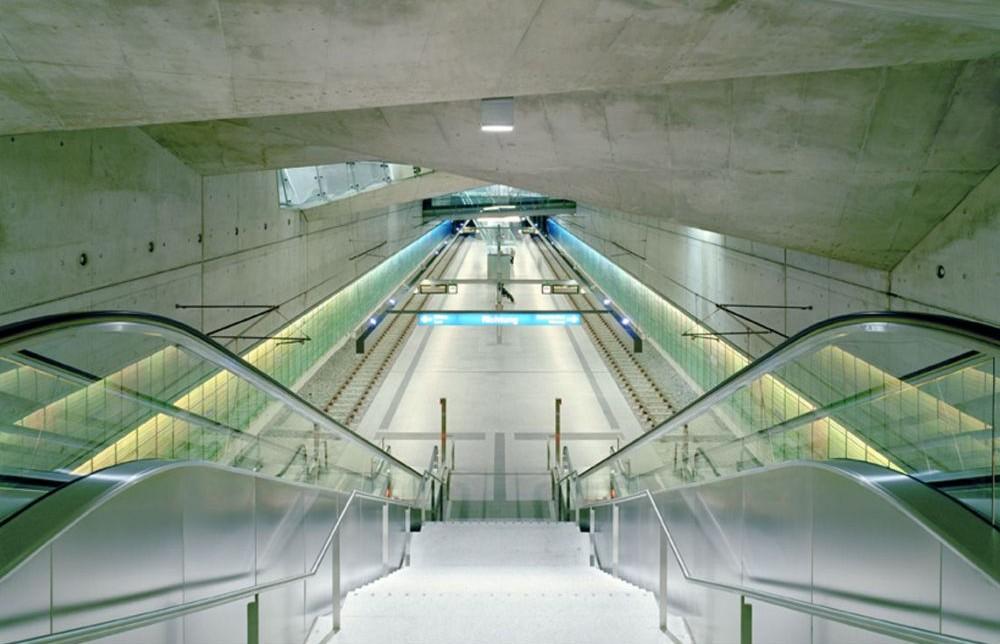 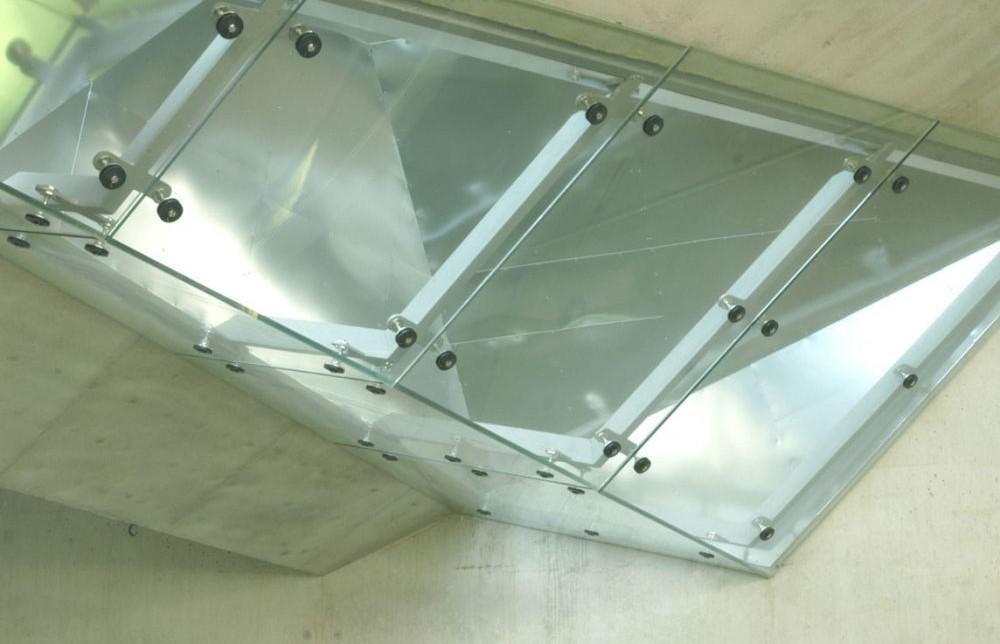 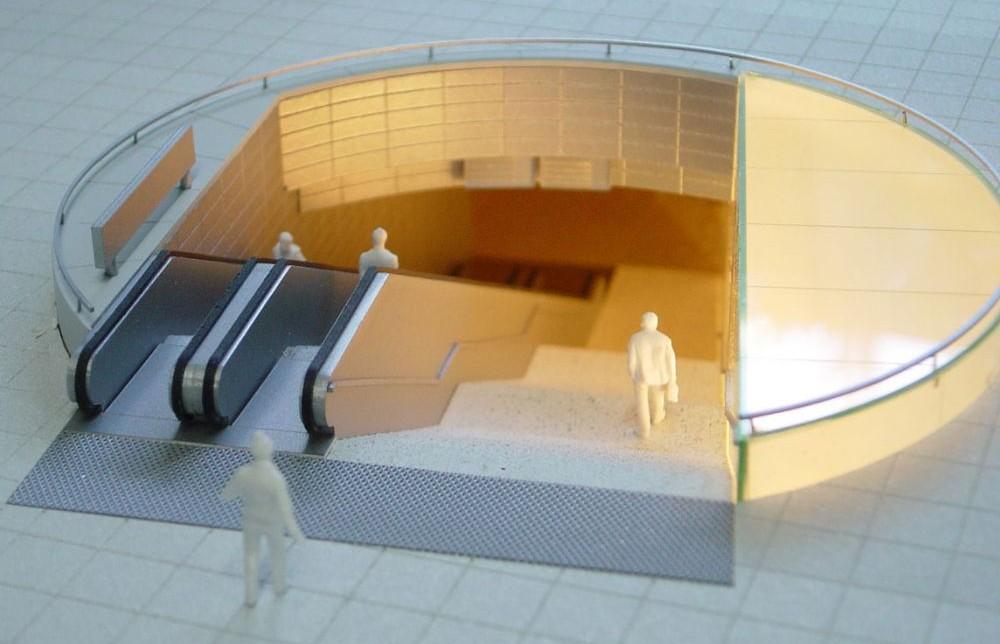 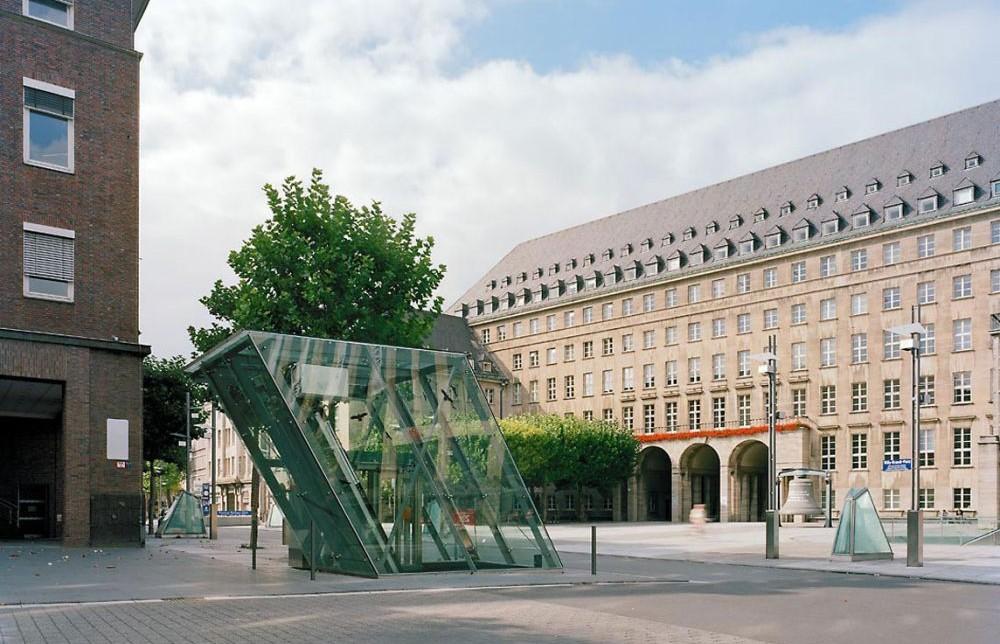 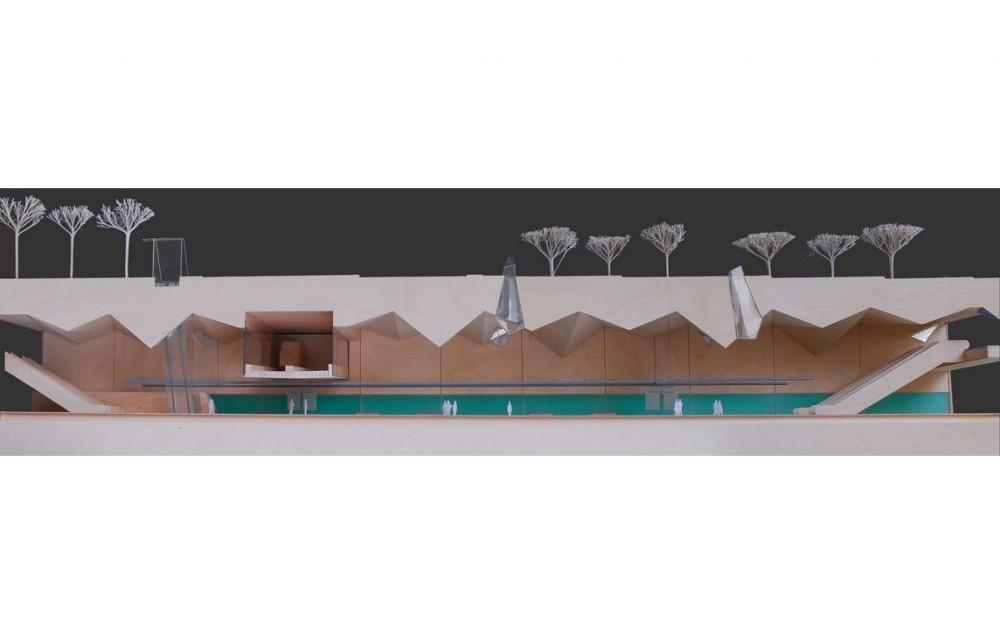 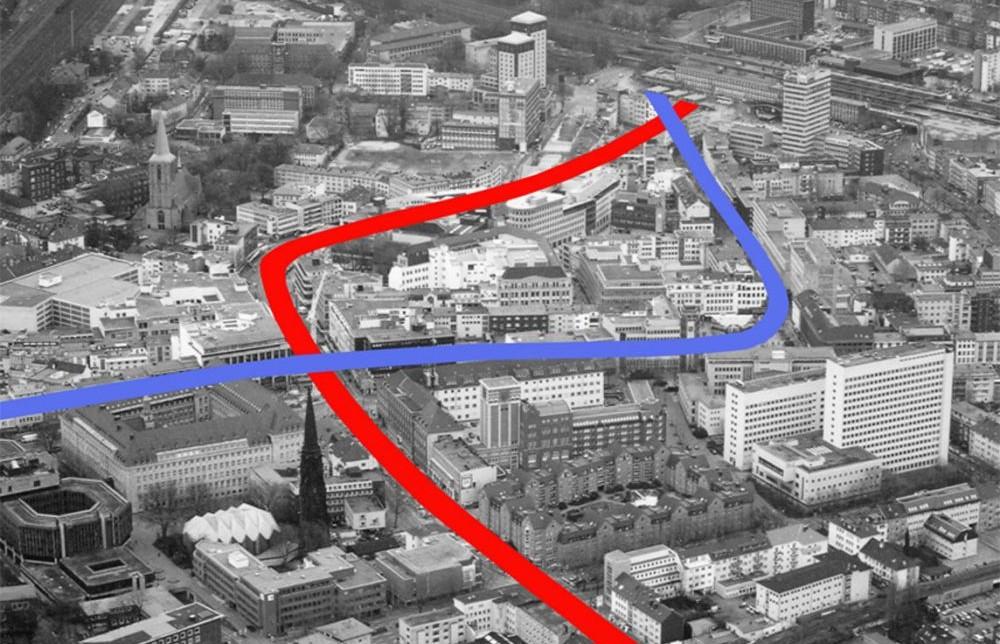 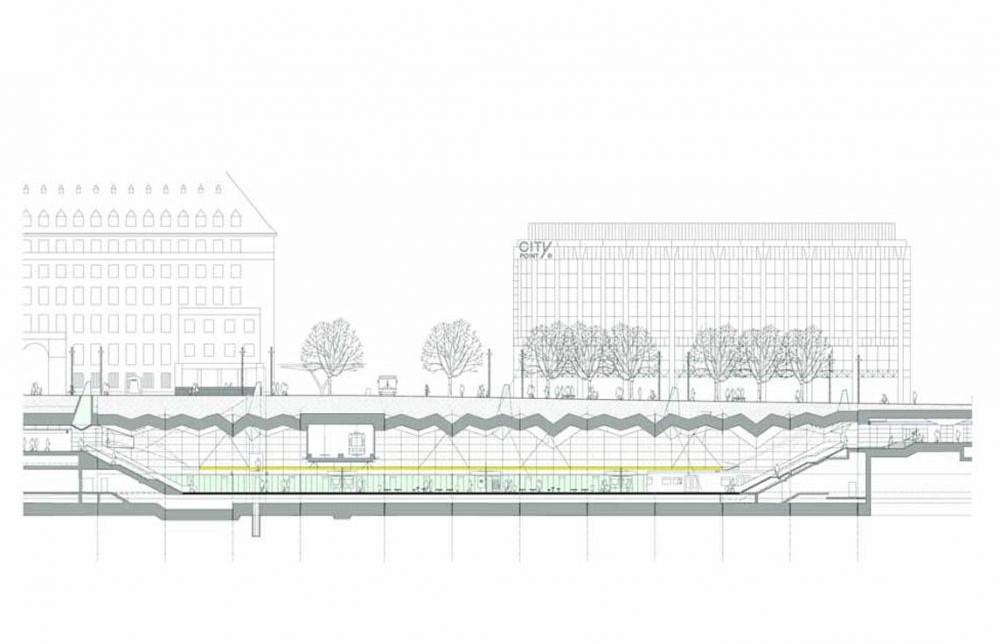 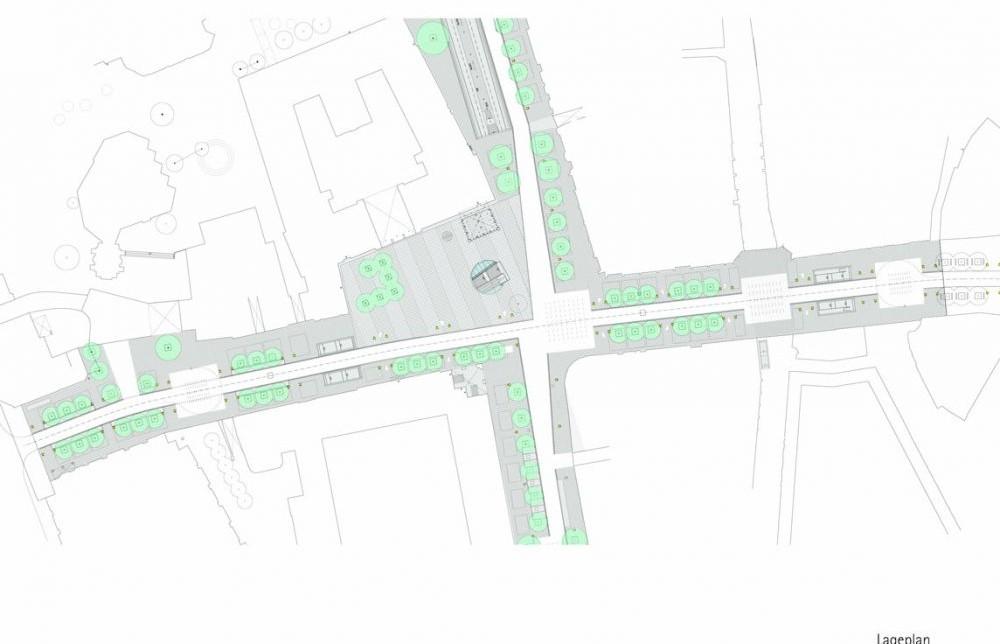 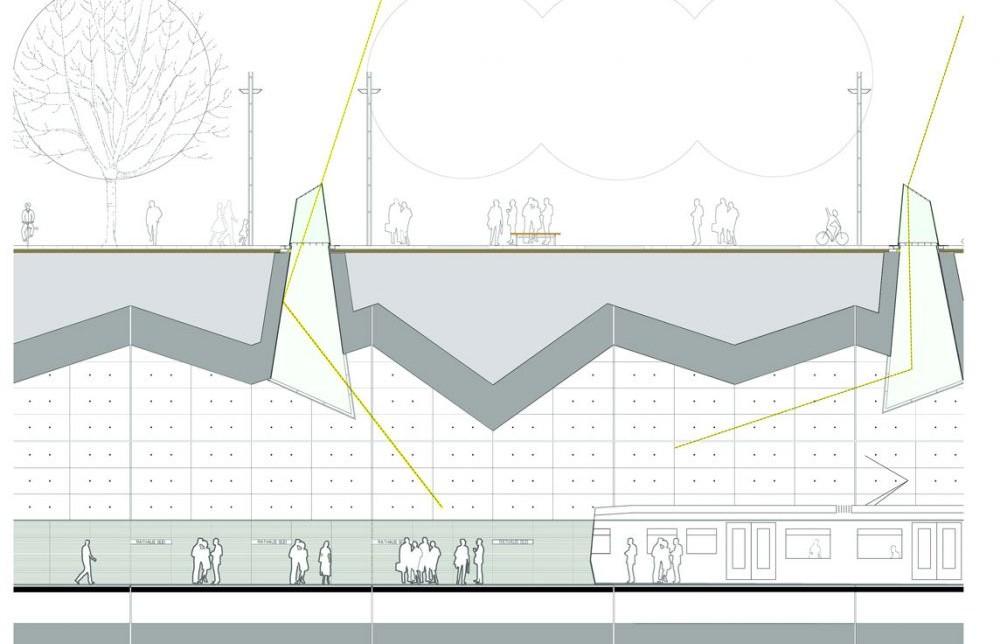 When we won the competition “LRT Station Rathaus Sd, Bochum” in 1995 we only had a faint idea of how long the integration of two LRT stations into a grown urban structure would actually take. In retrospect, the underground works appear like intensive in-vivo surgery with comprehensive function-preserving measures.

The client brief for the works comprised

– the underground LRT Station Rathaus Sd Line U21 including distributing levels, with connection to an existing Metro Line U35 and several department stores.

– the LRT Station Rathaus Line 306 at the Town Hall Rathaus side on a slope, including tunnel entrance and crossing the head space of Station Rathaus Sd by means of an underground bridge.

– restructuring of the road spaces and re-development of Rathausplatz Willy-Brandt-Platz, the plaza in front of the historic Town Hall from the 1920s.

– development of a leitmotif for the future boulevard from Westring to the Main Station, predominantly above the Metro route.

In 1995, the situation in Bochums city centre was similar to that in many Ruhrgebiet cities. Wide, desolate traffic-debased road spaces, fragmentary inner-city pedestrian areas with 1970s charm, a visible withdrawal of qualified retailers and Centro Oberhausen as a horror image in close pursuit.

The planning brief for the Rathausplatz area provided for a complex underground hub with giant-sized distributing levels, underground access to three Metro stations, department stores, shop-floor spaces and platforms with differing height for the variety of rolling stock. An instrument with colossal proportions.
This situation was not in line with our ideas, hence, we exchanged contrary to the client brief falling gradients, demolished distributing levels and relocated one station Line 306 to the Town Hall side, above-ground and as an ordinary tram stop.

This move came as a surprise to the competition initiator and resulted in a dramatic simplification of traffic relations. Thus, free spaces for design and construction were created from which especially the Station Rathaus Sd U21 benefited and which permitted adoption of a uniform design principle to surfaces of the future boulevard.

Station Rathaus Sd U21, a folded ceiling and daylight:

The disentanglement of complex underground interrelations created some latitude, in particular for the station space volume.
While the tunnel sections were built with mining techniques, an open construction was envisaged for the stations, with considerable interferences into urban spaces.
A cover-type method of construction was suggested in order to reduce impairments as much as possible, i.e. initially the station ceiling was installed on lateral bored piles and subsequently the stations underground lining is completed independent from above-ground uses.
Rather than backfilling the volume above the cover of the station, we used the space for ceiling design and construction. The outcome is a large-volume, support-less station space that is borne by an R.C. folded-plate ceiling.

The innovative approach: Daylight and glass

The effectiveness of the daylight apertures was verified in advance in Lichtlabor Bartenbach, Innsbruck, and in the heliostat of Messrs. ERCO, Ldenscheid, in 1995.

The glass bodies in the road space are made of pre-crushed glass which allows for a crystalline imagery and natural light scattering. The elements have also a vandalism-retarding effect since they visually appear already destroyed.

In 1998, we installed crushed glass prototypes as ventilation structures in the pedestrian area in order to test their effects. The three-layered glass elements had a symmetrical configuration and the centre pane was pre-crushed. The 13 prisms above the station were made with a similar technology.

Subjective sensations, visual reference to daylight, changes due to time of day, position of the sun, clouding over all this is tangible beside the spaciousness of the column-less space and provides for a new well-being.

Two more structures penetrate the station space: A glazed sloping elevator from train to road level and a glazed bridge of Line 306 that crosses the head space.

The train level ca. 14 m below road elevation is characterised by the stations longitudinal walls with a length of ca. 110 m. The rough-faced concrete walls illustrate the installation process of the cover-type construction, i.e. the initially cast folded-plate ceiling and subsequently cast-concrete tunnel walls. Concreting apertures were provided in the top formwork sections to permit seamless concrete placing. The circular, steel concrete placing funnels have remained visible as structural design elements, likewise the anchor crowns of the rear anchorage.

At the eye-level of waiting passengers, the longitudinal wall is made of backlit, coursed glass. Some rear sides of the coursed glass plates of float glass, white glass and parsol-green glass were pre-crushed. The crash patterns can be seen through the glass on the front side. The glass wall also serves sound absorption, in particular of deeper frequencies through slots between the glass packages and cavities at the rear. Together with the bed of broken stones it reduces the reverberation times in the large-volume space. The target was not creation of an anechoic space but a reverberation time clearly below that in a church space.

The stations quality features are continued to the surface.

The surface, road spaces at Rathausplatz

The above-ground structures are made of steel and glass. The steel constructions are assembled from sharp-edged steel sheets, uniformly coated with iron glimmer. Fixtures and fittings are of stainless steel and contrast with dark, large-sized stone paving that provide the basis for the future boulevard.
Embedded is the historic Rathausplatz of bright and heavy 1 x 1m granite slabs. We have almost doubled the surface area of this plaza. Rathausplatz is a political square and shall be largely free from urban furniture and commercial activities and provide the historic Town Hall an adequate appearance again. Also the 30-metre wide boulevard is classically and clearly zoned: wide strolling areas along shops on either side, rows of brought-forward plane trees with illumination, at the centre integrated areas for temporary market stalls, a centre lane for deliveries and bus lines.
The above-ground, surface design is an offer, a working overlay in a gruff cityscape with numerous ruptures and isolated qualities that should be manifestly further developed by the residents and business community.