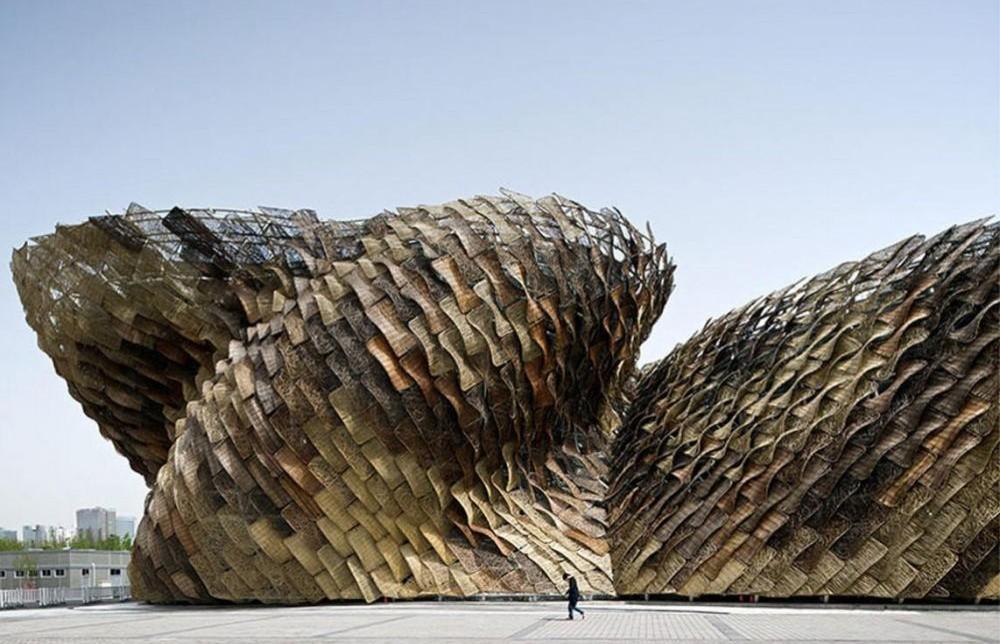 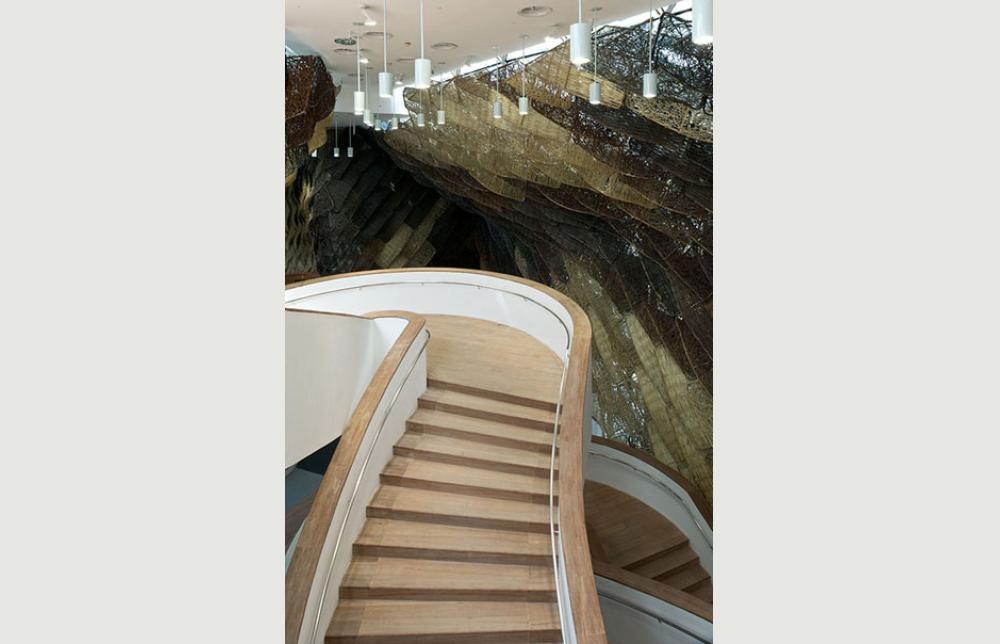 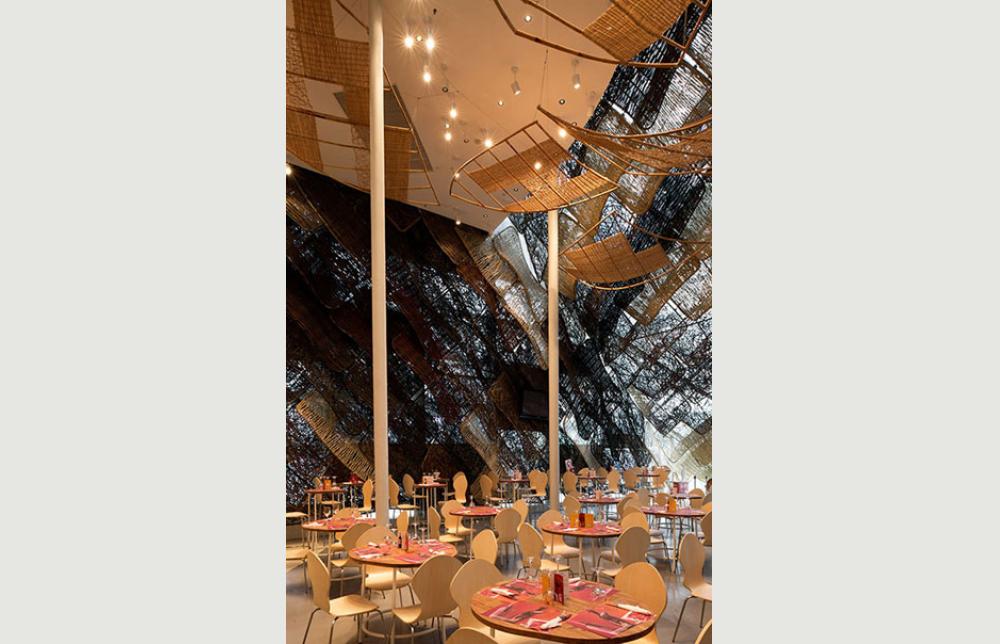 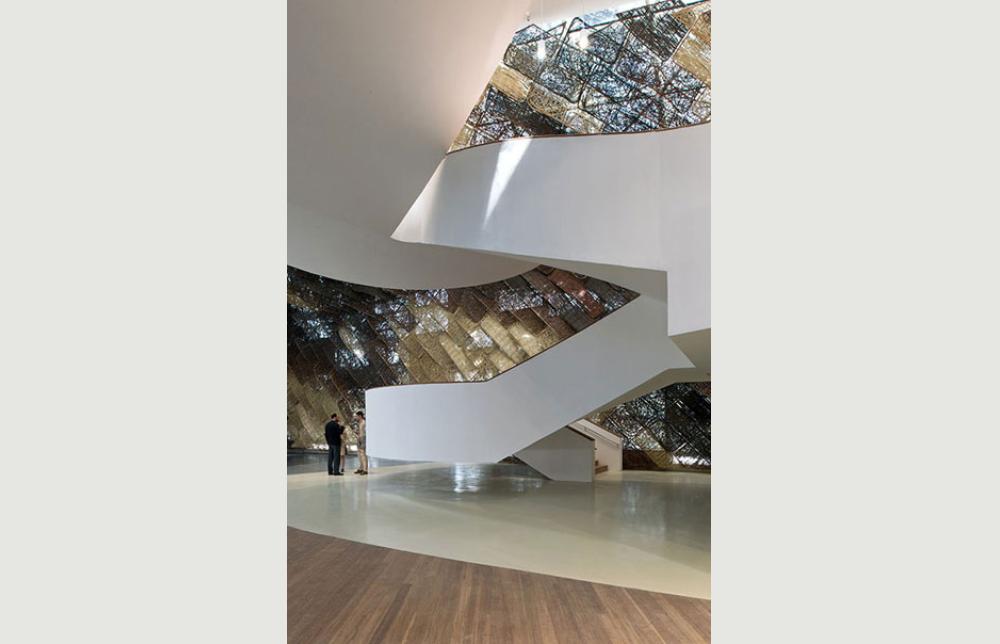 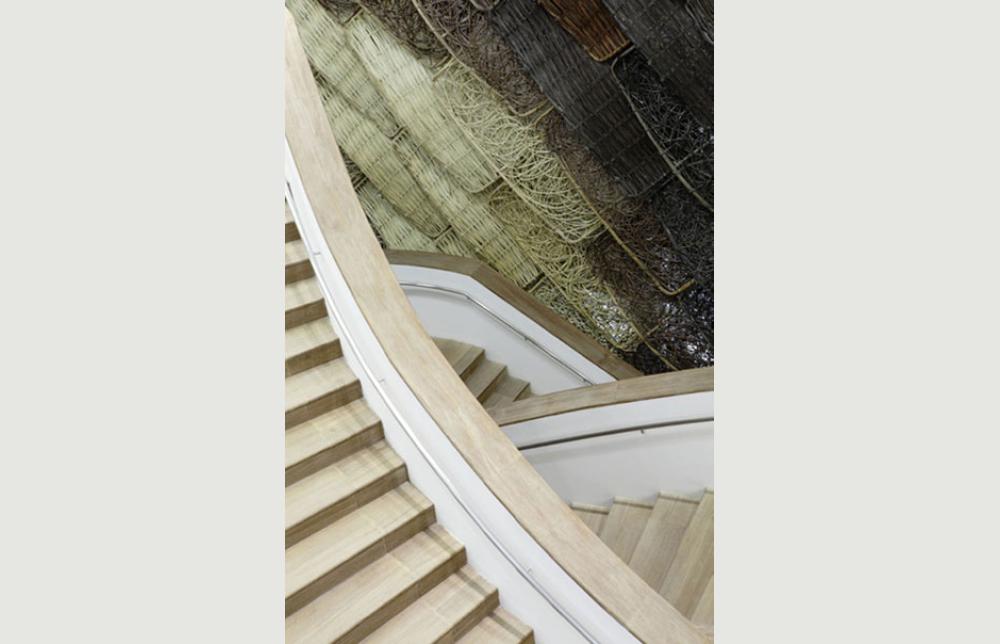 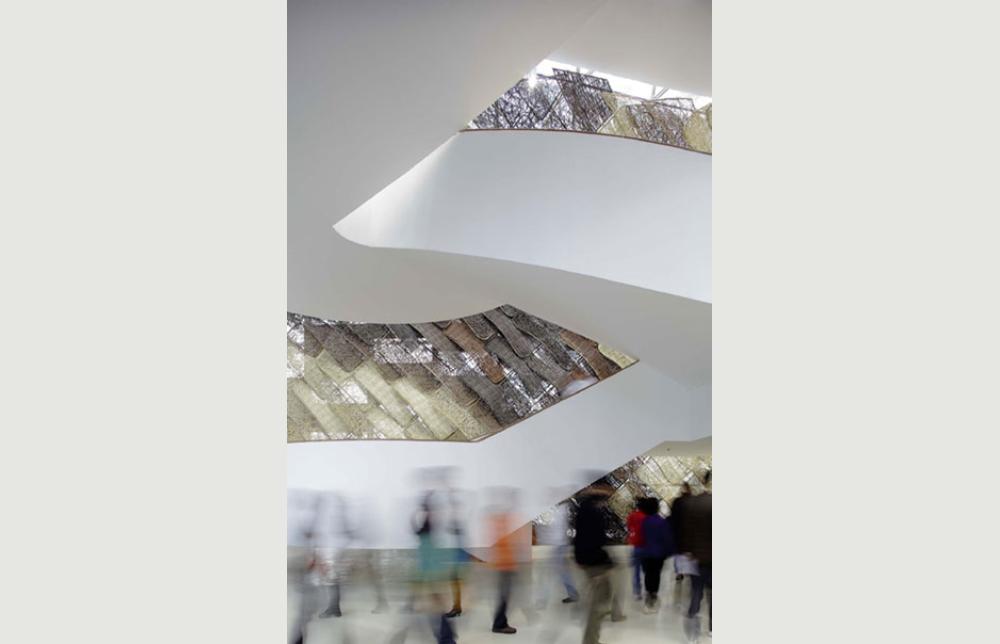 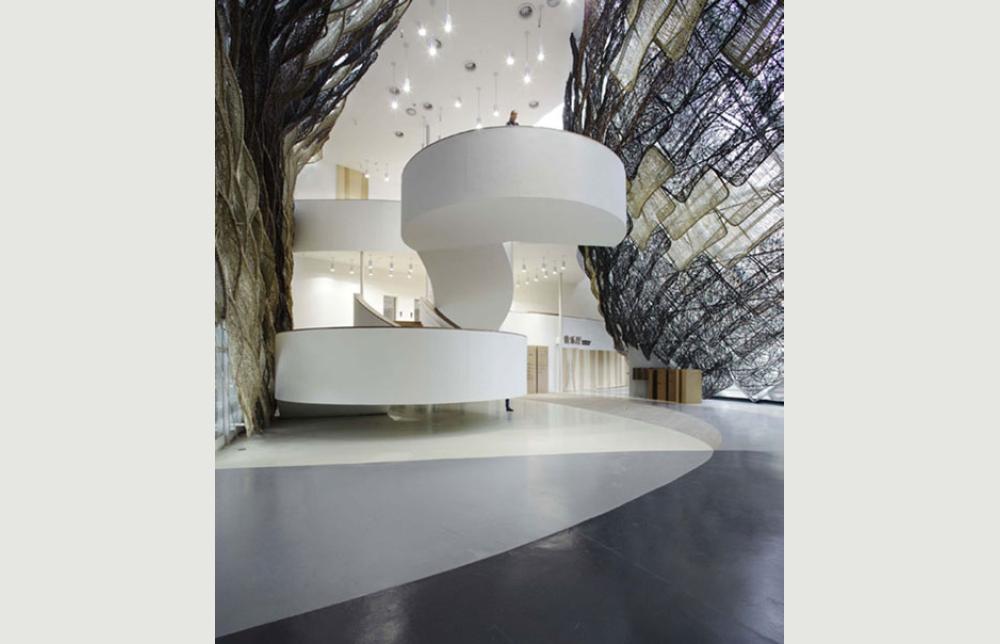 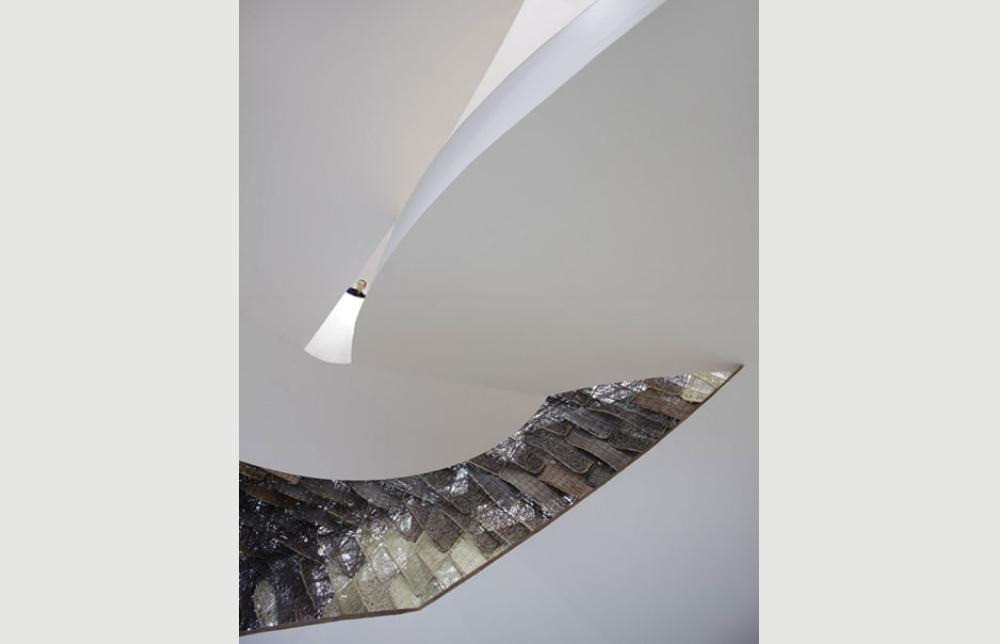 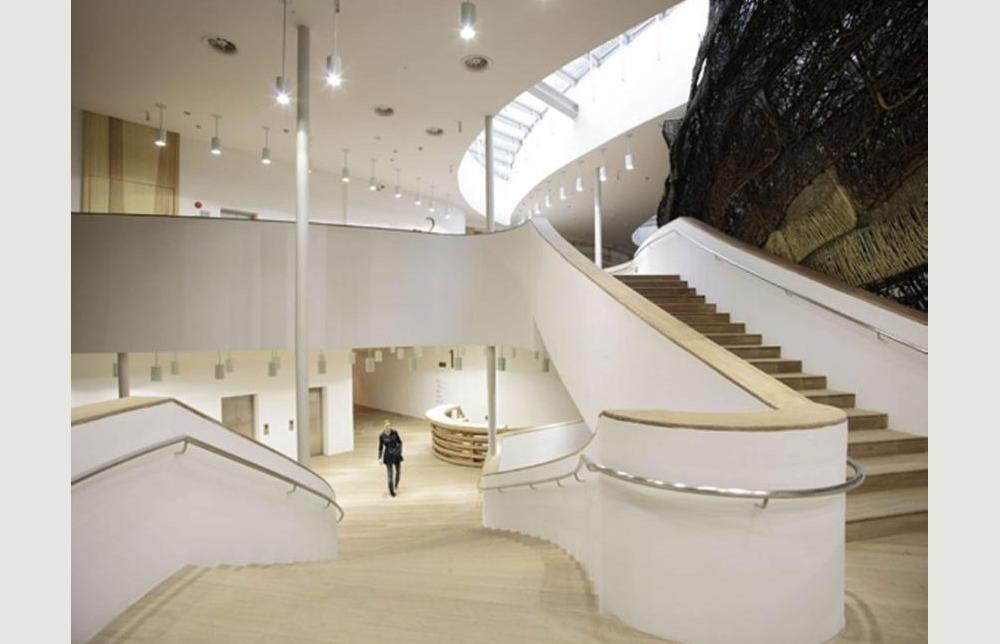 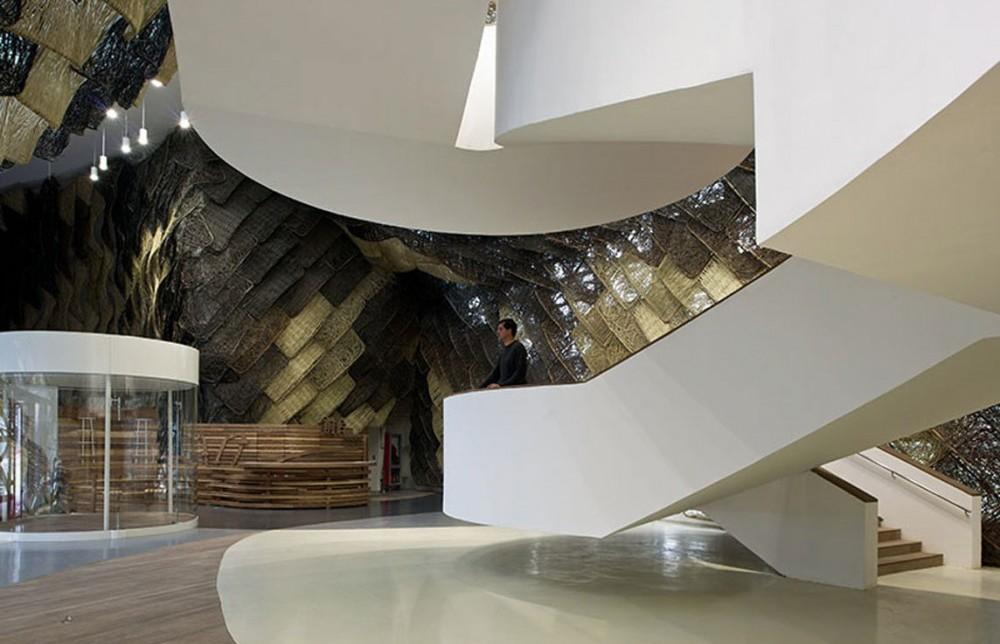 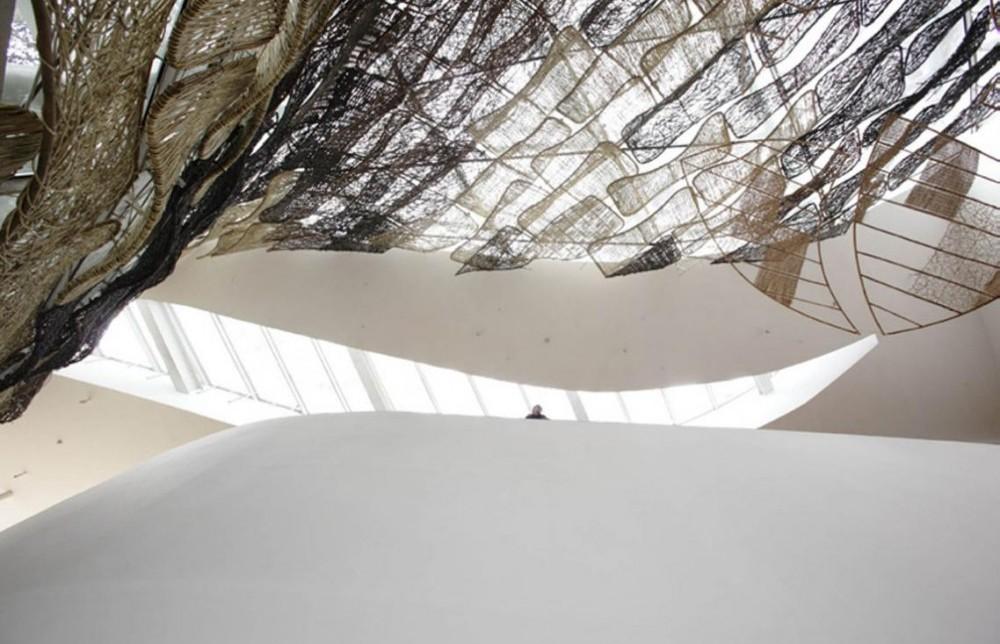 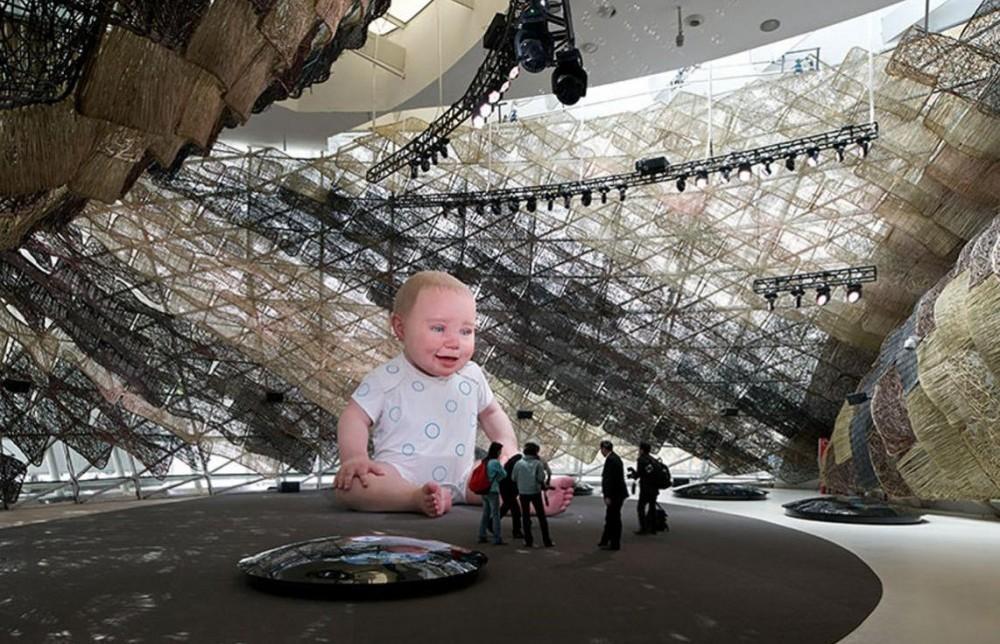 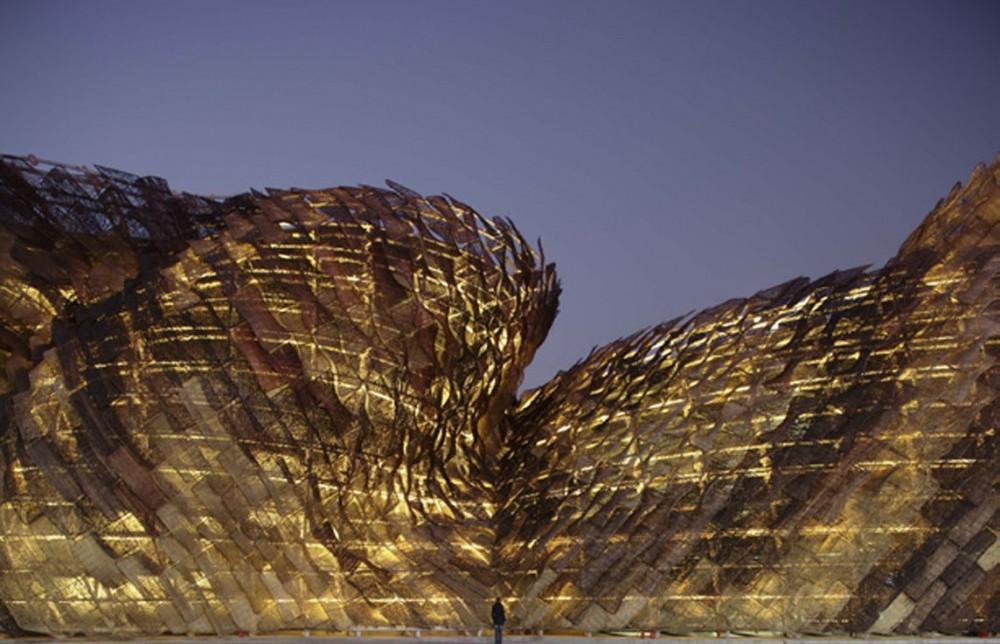 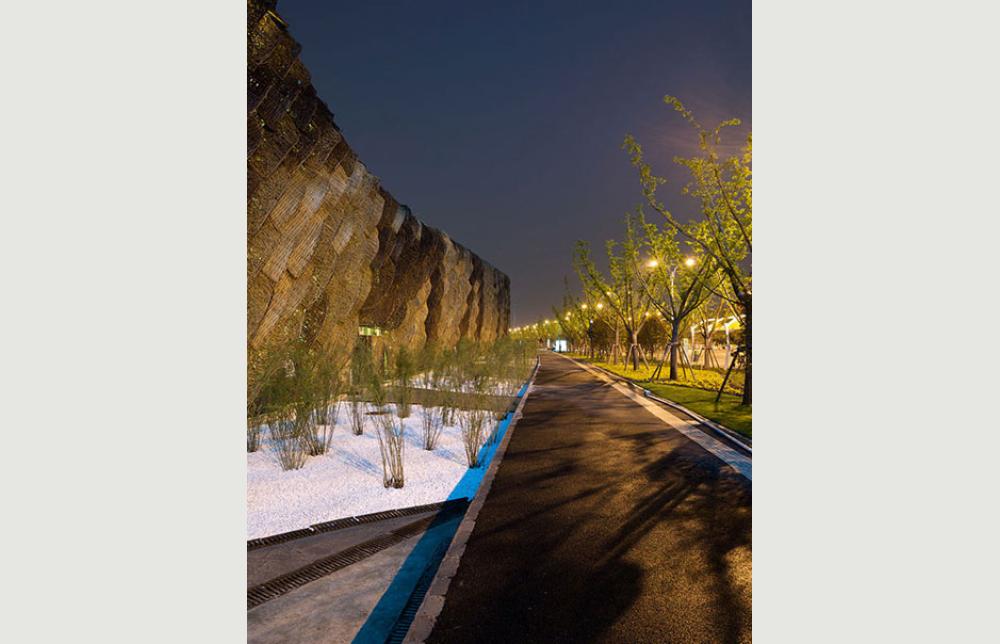 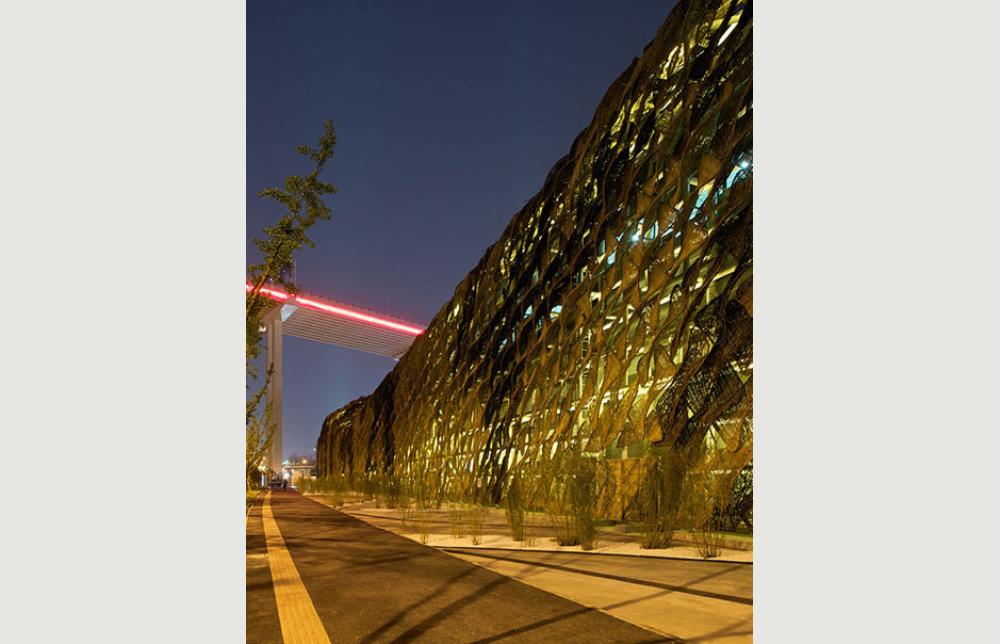 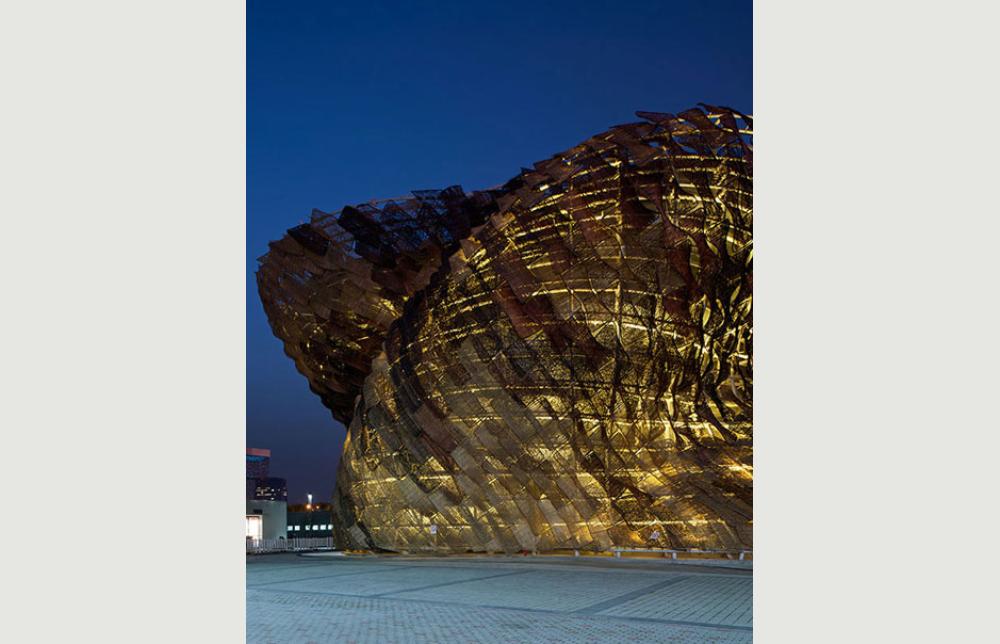 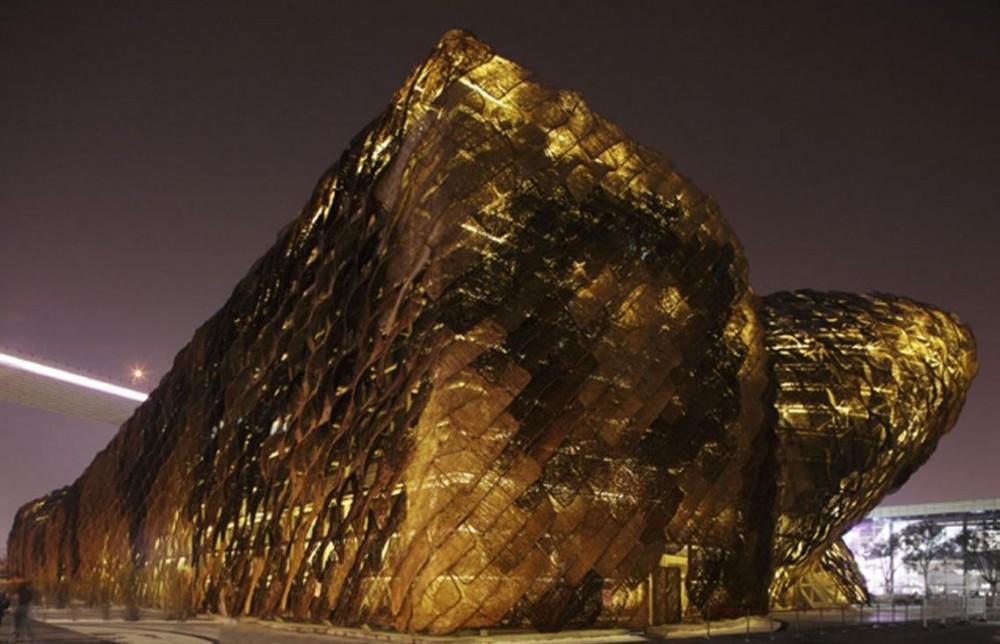 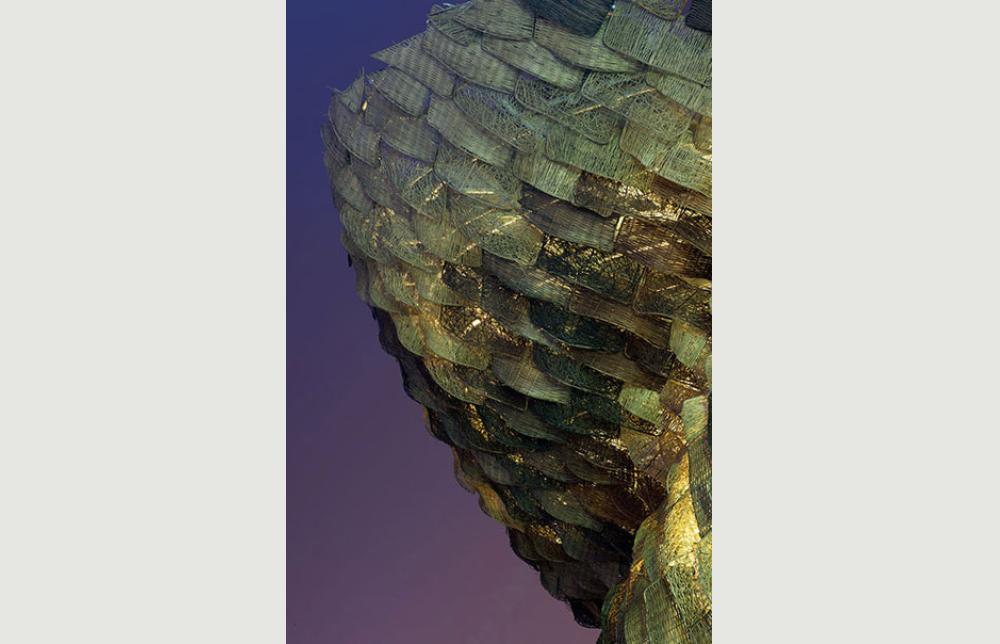 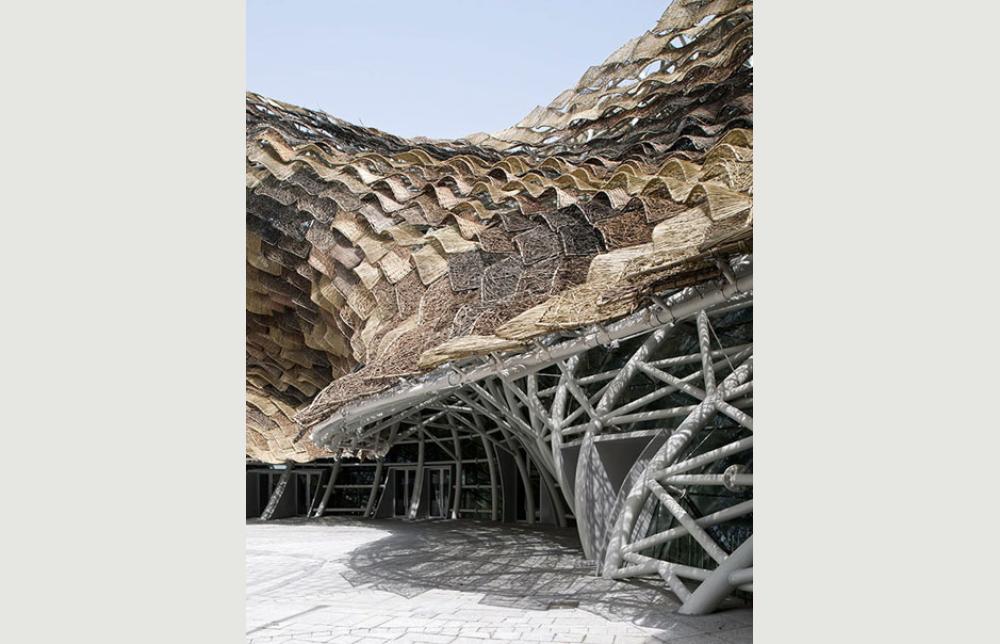 Built in a parcel of 6,000m2 (19,685 ft2), the Spanish Pavilion has a usable area of 7,500m2 (24,600 ft2). Aside from the spaces destined to hold the main exhibits, the pavilion counts with installations to host official receptions, an auditorium with 150 seats, a conference room equipped with simultaneous translation, a press room with a production set, and a support area for Spanish companies endowed with meeting rooms and work desks. Together with France, England, Germany and Italy, the Spanish Pavilion is one of the biggest in the Expo. It is located in section C, at the edge of the Huangpu River, and has Switzerland, Serbia, Poland, Belgium and France as its neighbors.

THE DESIGN OF THE PAVILION

The Spanish Pavilion for the 2010 World Expo of Shanghai seeks to reflect upon the Spanish climate, as well as to recover the extraordinary craft of wickerwork in order to bring it back to life and to reinvent it as a new construction technique.

If in the last World Expo, in Aichi (Japan), the Spanish Pavilion exhibited the colorful fantasy of the Spanish craft of ceramics, this one seeks to play with the incredible potential of wickerwork. Furthermore, it seeks to introduce wicker as a sustainable and viable material concept that remains present throughout the building.

Basketry techniques, handcrafts with natural fibers, are a global tradition shared by cultures of all times. Even though they vary from region to region, they occur in similar ways East and West. In this sense, the material choice for the pavilion attempts to bridge between two cultures, the Spanish (visiting) and the Chinese (the host).

The translucent quality of the weaved natural fibers inspires the creation of courtyards that, like wicker baskets, create wonderful lighting conditions that reciprocate the veiled transparencies of certain Hispanoarabic architectural elements -partial views, to watch without being watched, an ever changing game of lights and shadows- but without falling on direct interpretations of cliche. The strong light of the exterior is sieved through by superimposed steel and wicker meshes.

The biggest patio of the pavilion opens to the exterior to attract and bring in the visitors. This courtyard is to the city what the backyard is to the house: a place of celebration and calm, a place to breathe. This plaza will then be a civic space for gathering. The rest of the patios remain in the ambiguous territory of the in-between -interior-exterior- where visitors can simultaneously weave in and out of these patio-basket-plazas. This pavilion pretends to escape from the single container box, defined between hybrids spaces that provide for a smooth and easy transit.

The nature of the project demanded a new collaboration model between the architect and the engineer. The free form of the structure is characterized by complex curvatures that made necessary the development of an independent structural system to support the form. The search for this structural expression is defined by a search for the´tensegrity` of the form, the double curvature wrapping facade that constituted, simultaneously, the solution to the problem and a challenge.

The problem of the facade was solved with a three-dimensional grid of tubular elements that come together to form double facades capable of responding to the different requirements of the building -dead loads, live loads, wind pressure and seismic activity. Interior columns, floor slabs, sheer walls and elevator cores comprise a structural system to which every part is essential to he integral performance of the system.

Having manipulated the form through complex computer-aided technologies, vertical and horizontal planes were cut for the assembly of the surface and resulted in curves that defined the axes of the tubular structure. To reduce the complexity of the work in the shop and in-situ, double curvatures were built through the combination of two groups of single curvature tubes, one horizontal and one vertical. A further simplification for the production of curved tubes was the adaptation of all the resulting variable curves to a small number of differing curvatures. The use of these complex three-dimensional models also served as a communication bridge between the architecture studio, the engineering firm and manufacturing workshops.

In contrast to the high-tech construction of the tubular steel structure, the wicker panels that clad the facade use simple and ancient manufacturing techniques. Built in small shops by local wicker craftsmen of the Shandong region (Northeast China), each panel is made of woven wicker fibers that wrap around a slightly distorted metal frame to give the panel a warping effect. The different densities of wicker fibers let through to the interior of the pavilion changing light and shade. With this simple method, introducing few new variables to ancient traditional techniques and applying them to a twenty-first century building, we designed cladding components of surprising expression.

The fa&CCedil;ade of the building integrates a completely new element: in a mosaic like fashion, a series of Chinese characters can be appreciated superimposed with the facade. They speak of the friendship between China and Spain, reference the cultural exchange between East and West., and reference the elements of nature, like ri (sun) and yue (moon). These characters are obtained with the accentuation of the natural stains of the wicker acquired during its steaming process.

The sun and the moon, two fundamental concepts of Eastern philosophy, contain the dualities of that make the world work. Miralles Tagliabue has subsumed these elements to a poetic reading of the relationship between Spain and China, announcing good omens for the future that wind collects and carries around the country.

These symbols may not always be visible as the changing lighting conditions of the day and the undulation of the façade play with their reading –prompting the approach of curious Chinese visitors.

Setting off with a generational perspective, under the motto “de la ciudad de nuestros padres a la de nuestros hijos” (from the city of our parents to the city of our children), three rooms (2.500 m2/8,200 ft2), will tell the story of the change experienced in Spanish cities during the decade of the sixties to the present day caused by an unprecedented exodus of the countryside to cities.

In search of a Spanish ‘model’ urban inhabitation, the journey ends with an emotional, yet responsible, look at the future we hope to pass to our children.

The goal is to convey and promote a modern image of Spain in China through the use of clear and attractive content for a Chinese public that has rarely experience the Spanish reality.

Over the six months that the Expo is open 30,000 visitors are estimated to come by daily. In the Pavilion, they will be able to circulate a route of about 20 minutes through spectacular installations with especial effects and life performances.

One of the most remarkable spaces of the Pavilion will be its plaza, place of gathering and communication where the best of Spanish performance art and culture will be performed under the direction María Tena, Planning Director of the Spanish Pavilion: film screenings; dance; theater; night spectacles; weeks dedicated to one and each of Spain’s autonomous communities (states); events in collaboration with the most outstanding Spanish institutions of international reach –a promotion platform for Spanish companies; and a tapas bar regent of restauranteur Pedro Larumbe.