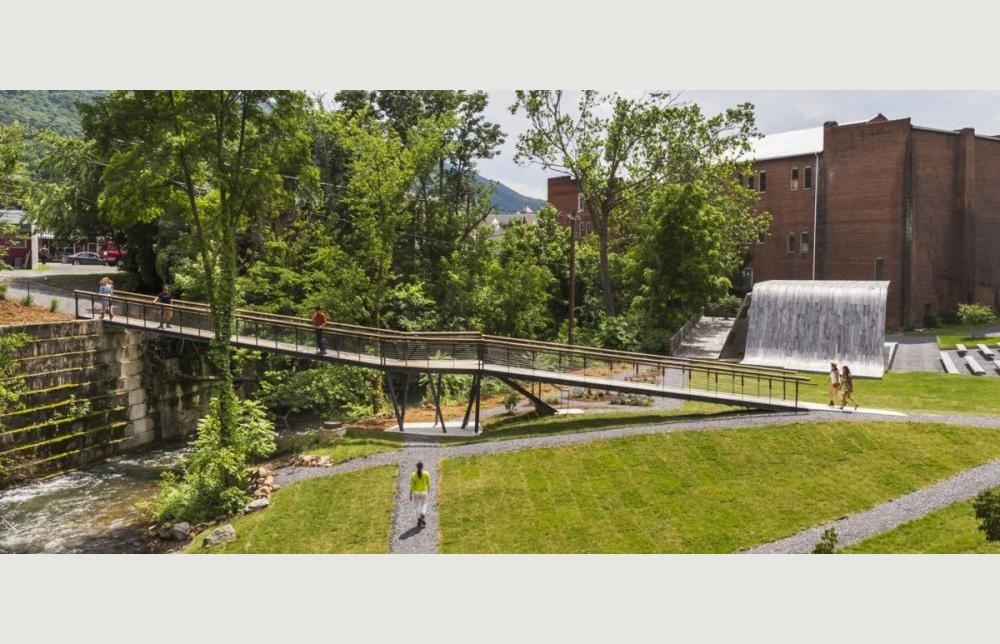 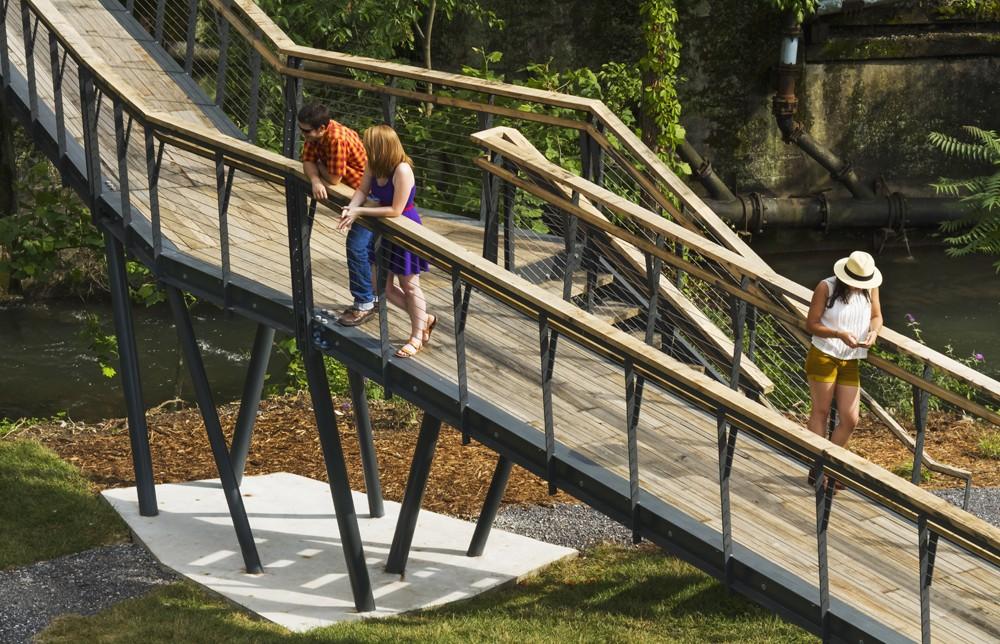 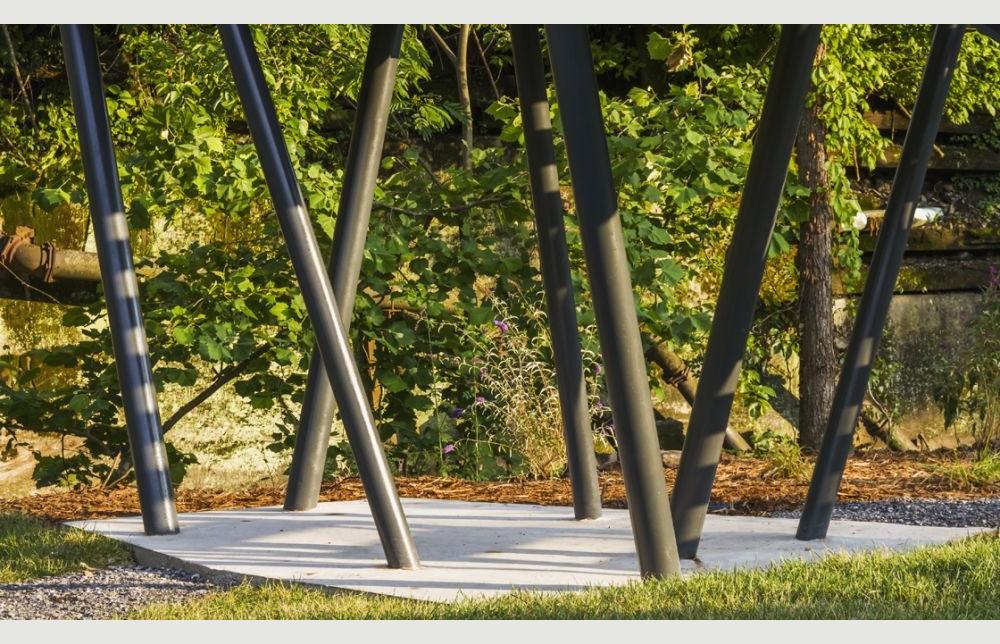 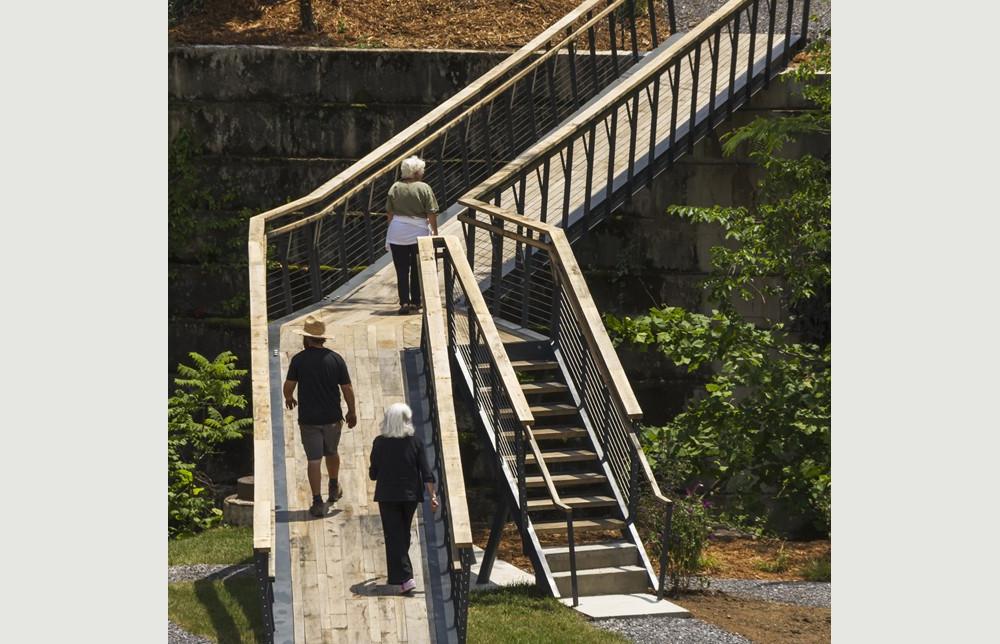 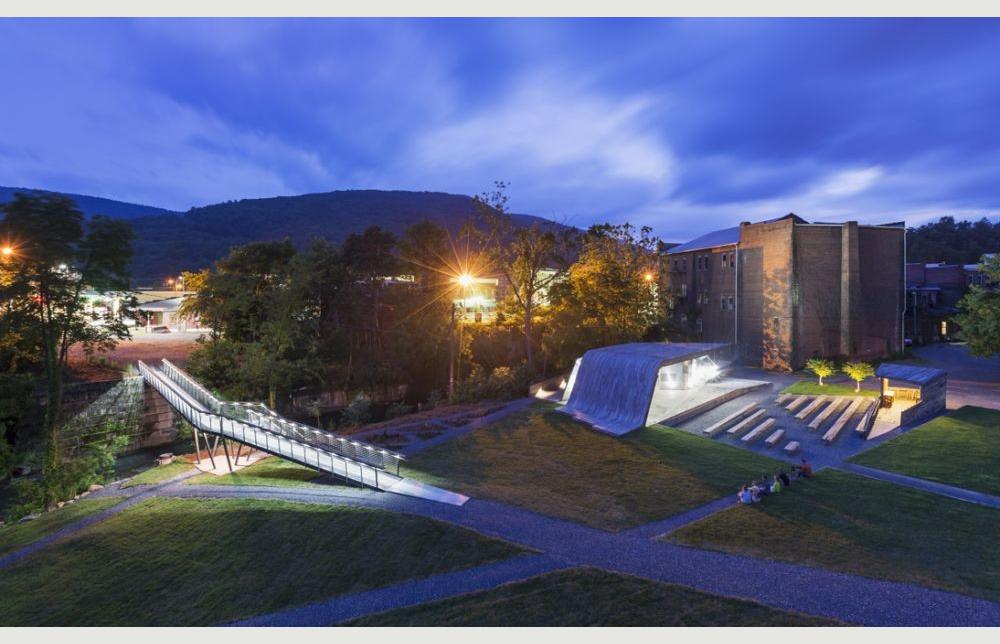 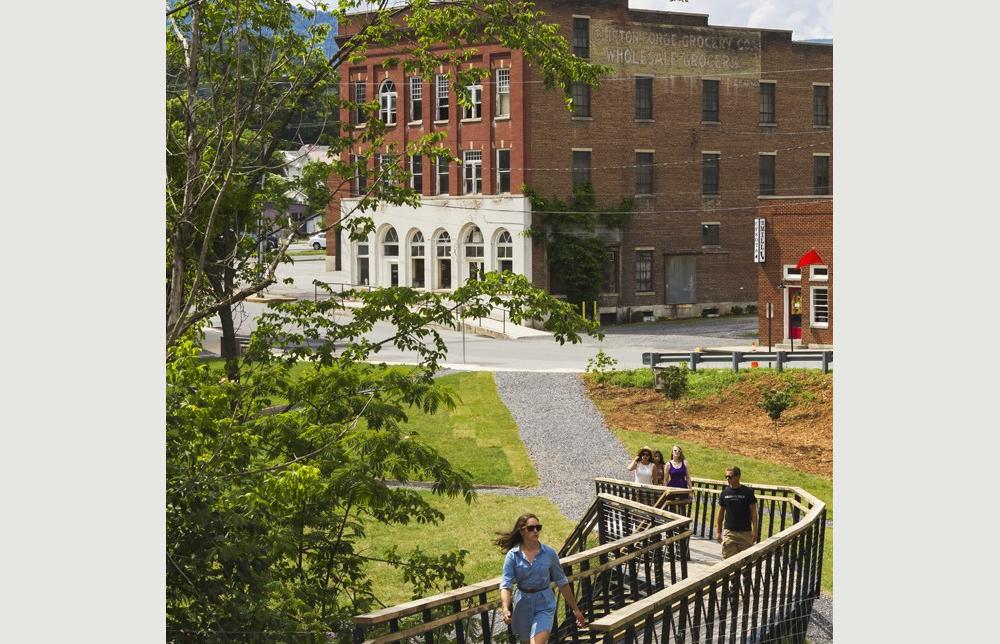 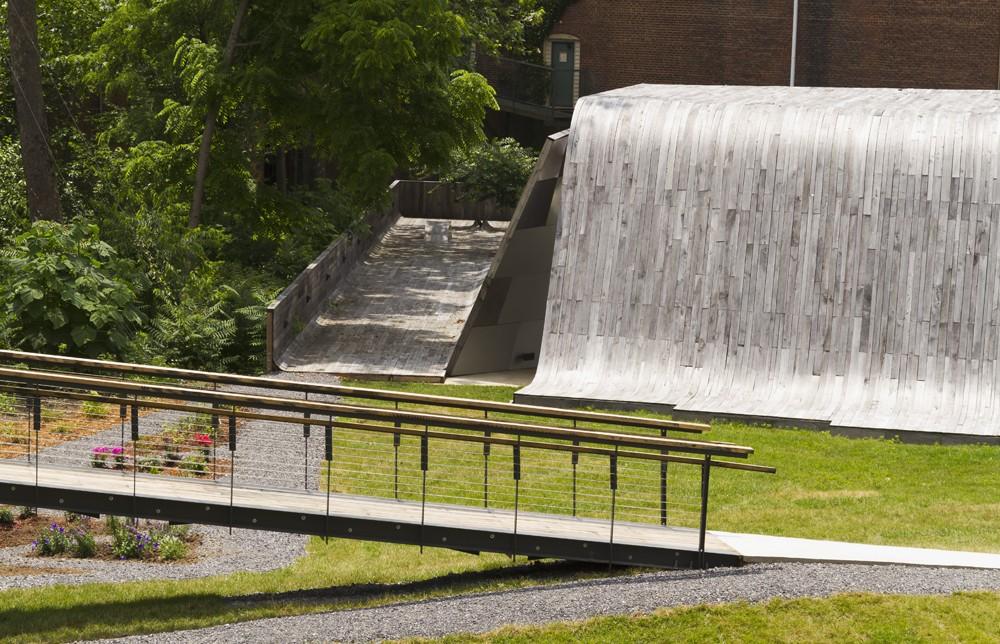 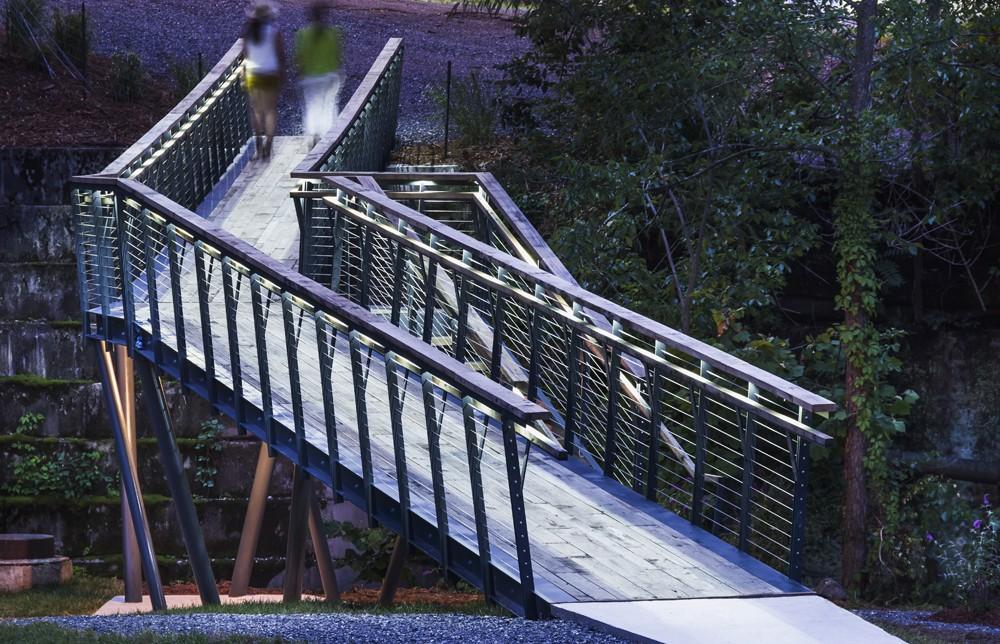 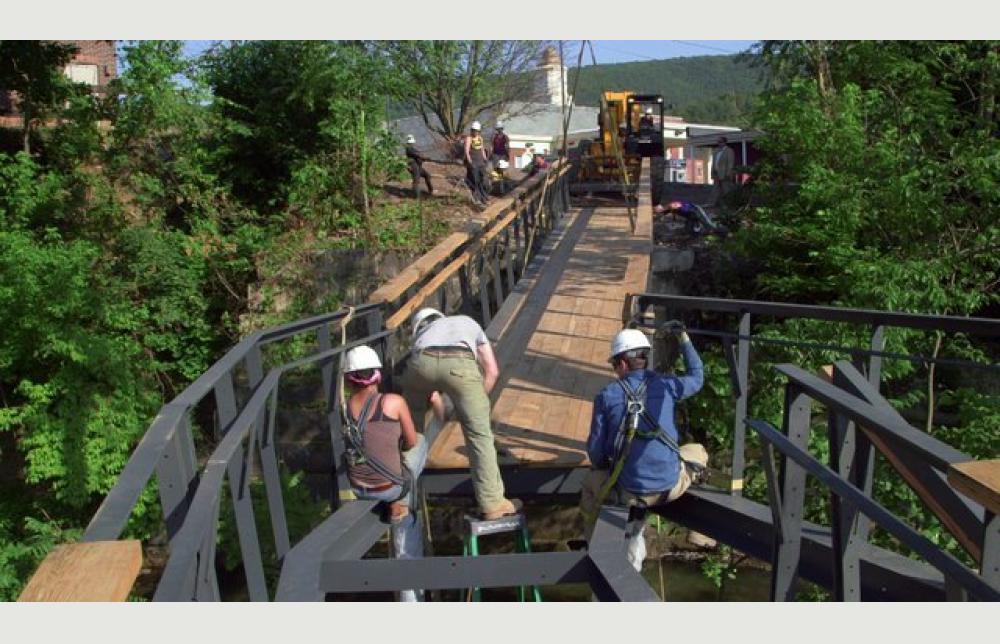 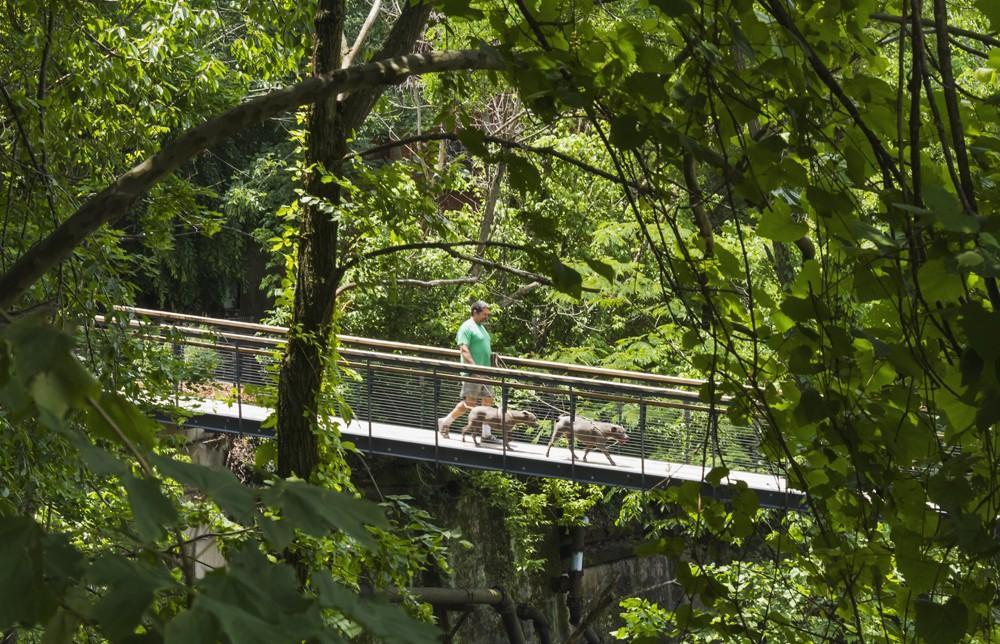 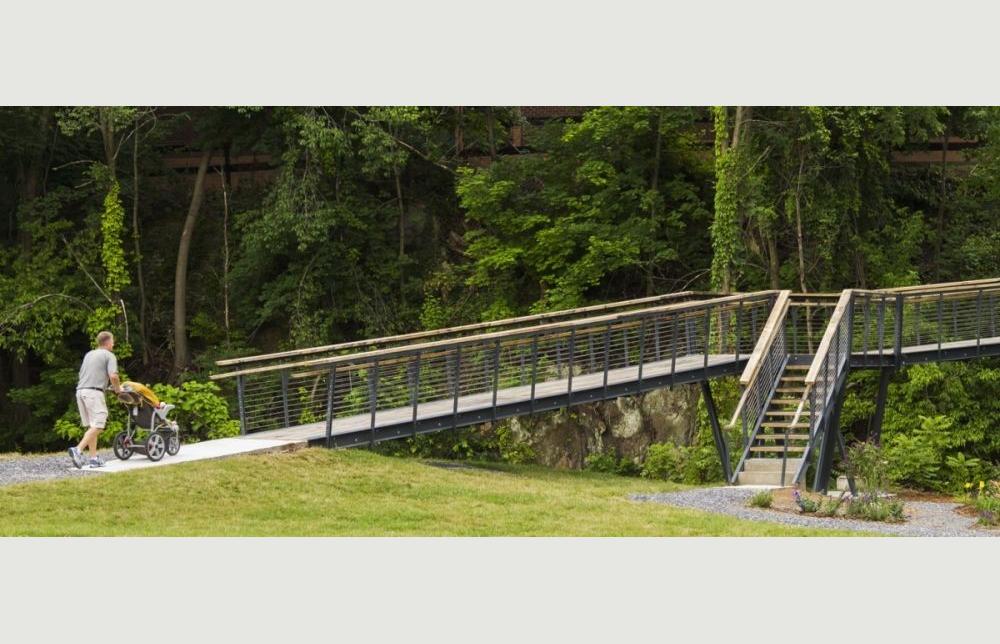 The project is situated in the economically strained Virginia rail town of Clifton Forge. It is the 2nd phase of the redevelopment of a post-industrial brownfield into a public park and performance space which aspires to inject a distinct sense of identity and place at the heart of the community.

This second phase of the project includes a pedestrian bridge, park space and a creek access. The idea driving the design is that the built elements emerge out of the landscape of the park. The bridge is a bent path, which ramps and steps, inviting people to wander as well as providing a direct link, over the creek, between the new ampitheatre and the historic downtown. It is supported at mid-span by a forest of leaning columns, which create a sheltered repose along the creek. Transparency was an integral part of the overall concept; the bridge deck and rail assembly maintain a thin profile, giving the bridge a subtle presence on the site. The entire length of the bridge is ramped to accommodate the site’s significant elevation changes. The park is divided into multiple landscaped areas, including a line of tall grasses along the creek, a labyrinthine butterfly garden adjacent to the amphitheatre, a beach along the creek, and a series of grass lawns at the center.

Major concrete foundations were limited by supporting half of the bridge on an existing concrete retaining wall. This wall underwent rigorous testing to verify its strength and stability. Its ability to support the bridge loads minimized site-work and the manufacturing of new concrete.

The structural steel frames were pre-fabricated in modules and bolted (rather than welded) on-site, allowing the bridge to be easily and efficiently assembled, but more importantly limiting waste and allowing it to be dismantled and recycled at the end of its service life.

The bridge deck is clad entirely in locally and sustainably harvested and milled white oak (within 10 miles of the site). Frames and handrails are constructed from antique white oak timbers, reclaimed from the site’s previous warehouse (materials, reclaimed from the warehouse were also used to frame and clad a farmer’s market pavilion in the neighboring town).

The metal-skinned (zinc, stainless steel, titanium, and aluminum) composite panels are end-runs that were diverted from the manufacturer’s waste stream. They give the amphitheatre its distinctive mottled appearance, publicly express the projects underlying environmental consciousness, and tie the material palette of the bridge to that of the amphitheatre.

Clifton Forge, Virginia is representative of many previously prosperous American rail towns, struggling to survive as the industries, which fueled their growth, continue to abandon them. Tucked within a small valley along the Jackson River, this rural Appalachian town faces severe urban challenges. Deserted storefronts, empty houses, and decaying infrastructure all contribute to an underlying sense of abandonment.

The redeveloped site provides much needed public space along the creek, at the center of town. The bridge is a vital component of civic infrastructure that reunites the once divided town, promotes walkability, and knits together the elements of arts-based community revitalization efforts within downtown.

The Smith Creek Pedestrian Bridge is a charitable undertaking that was designed and built by 17 third year undergraduate Architecture students from Virginia Tech’s design/buildLAB. After studying the town and working with the community to develop a program, all 17 students made individual design propositions for the project. From those, students iteratively merged their proposals. In this way, all of the students contributed ideas to the discussion. It was imperative from a pedagogical perspective that not one “scheme” was chosen. Rather, all students collaborated to develop the final design for the project.