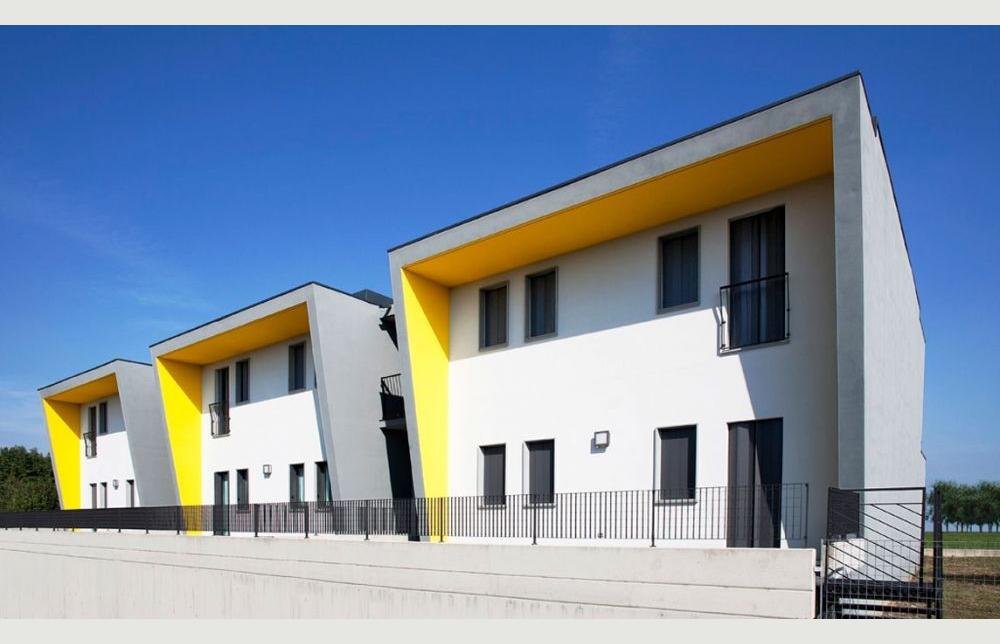 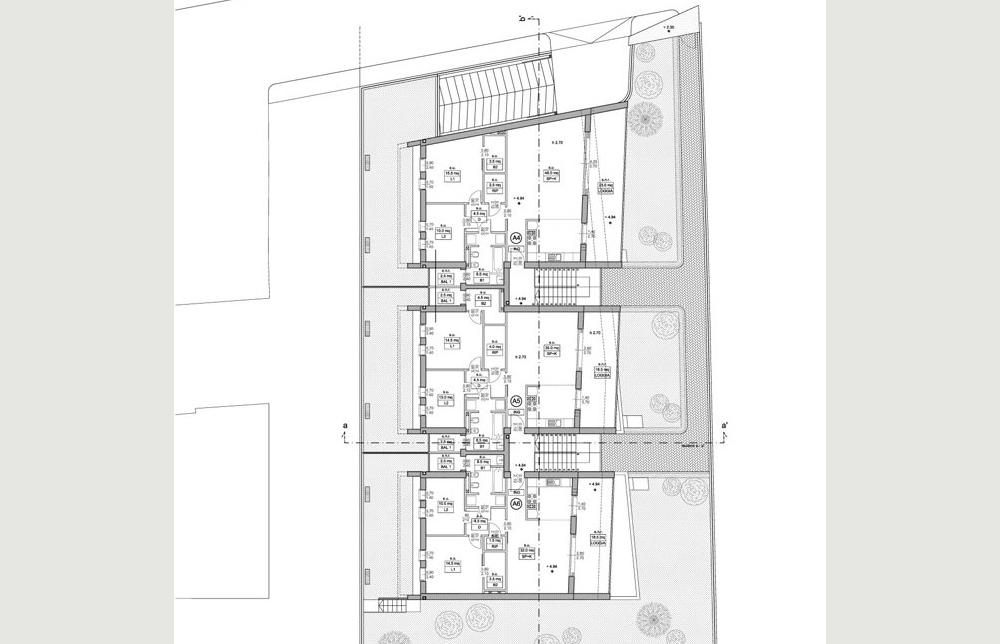 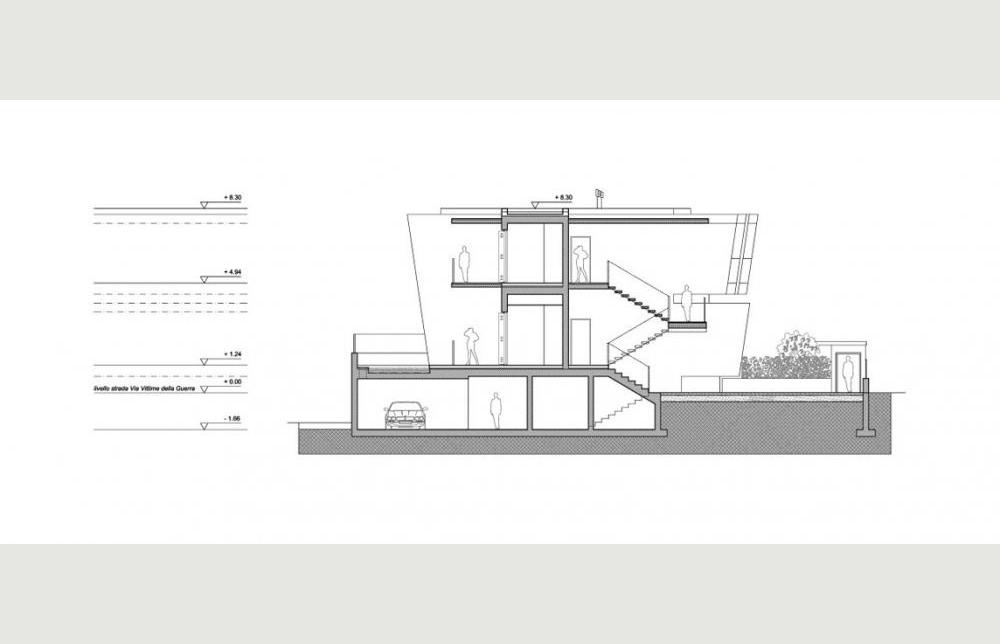 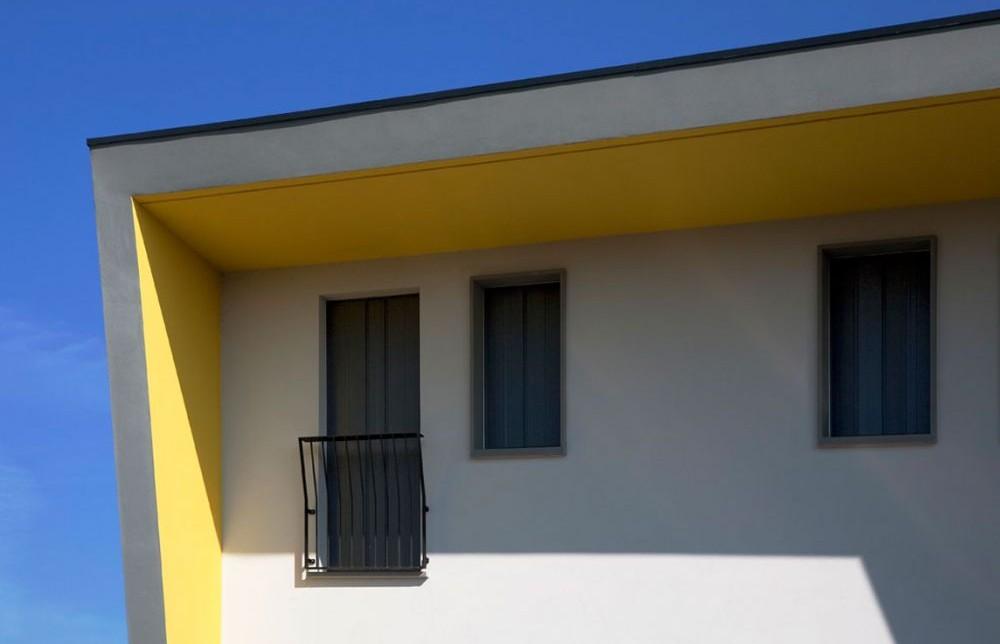 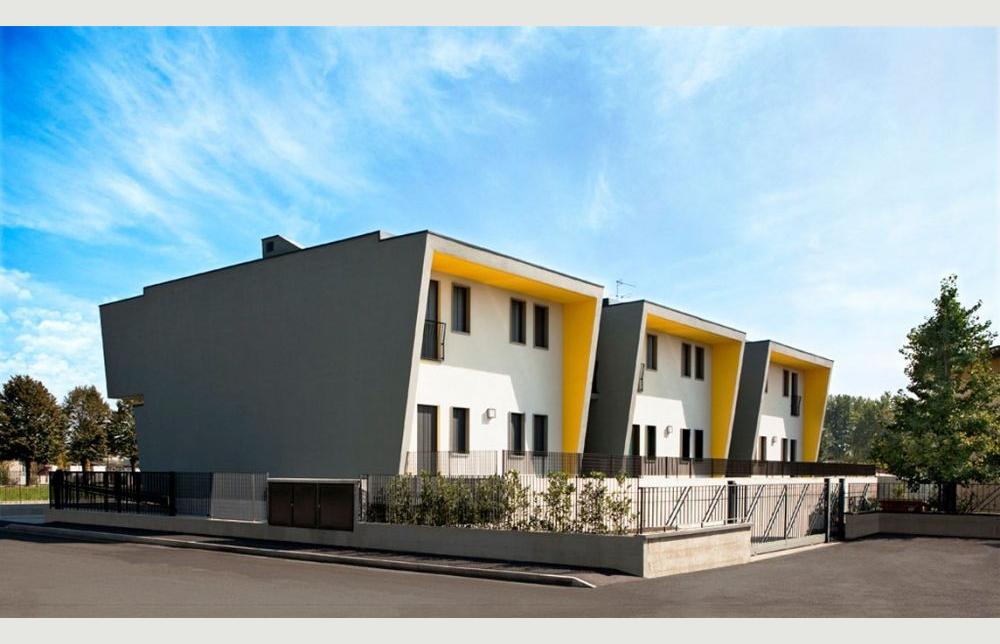 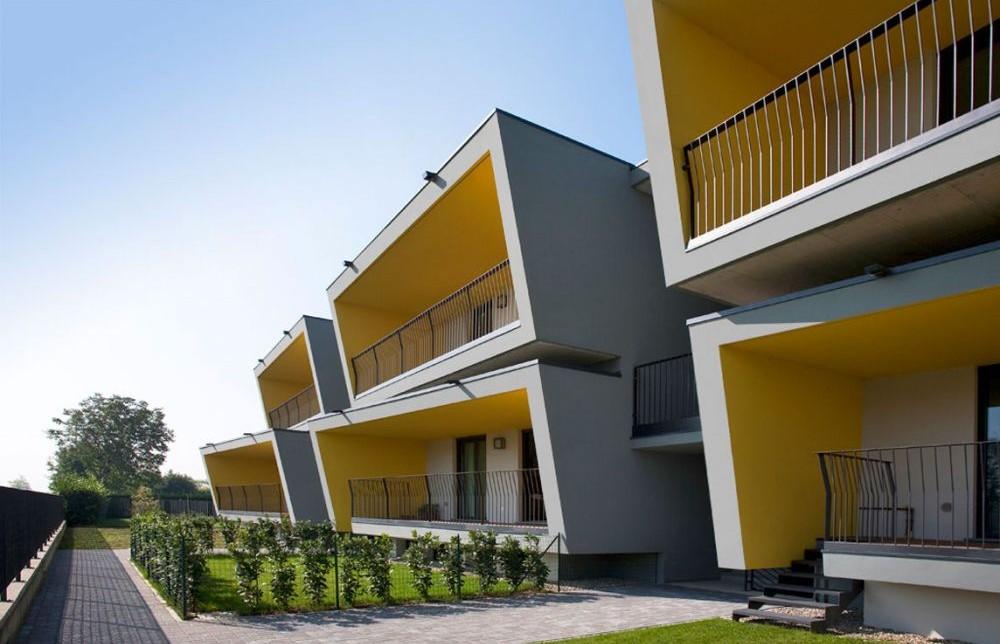 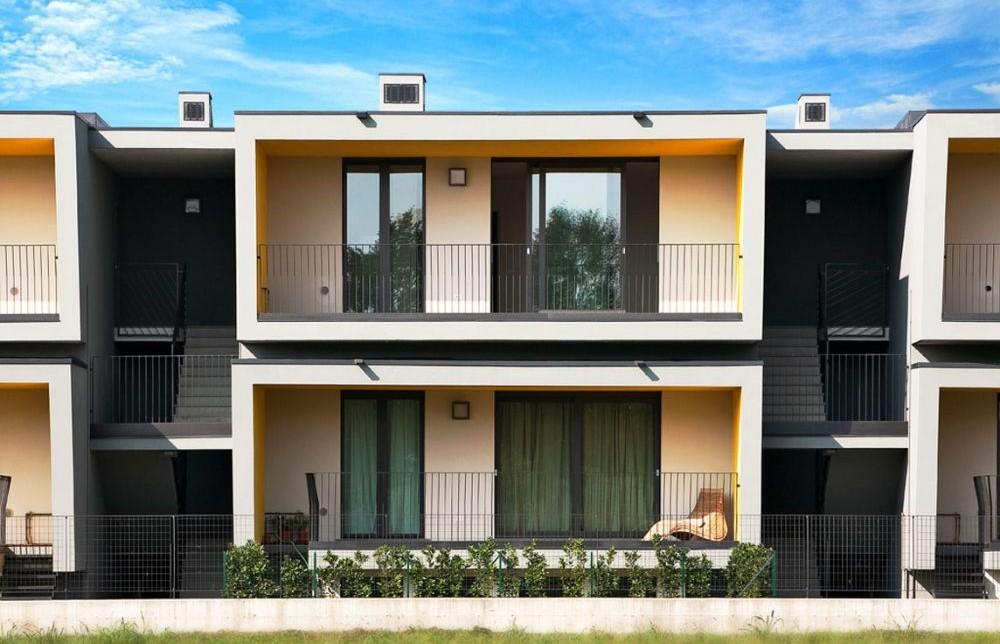 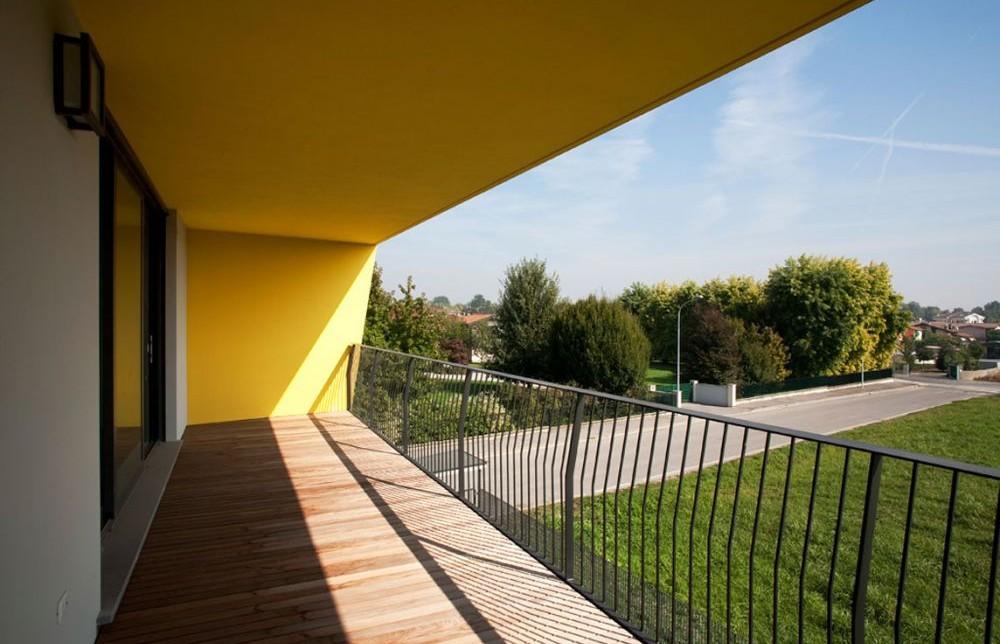 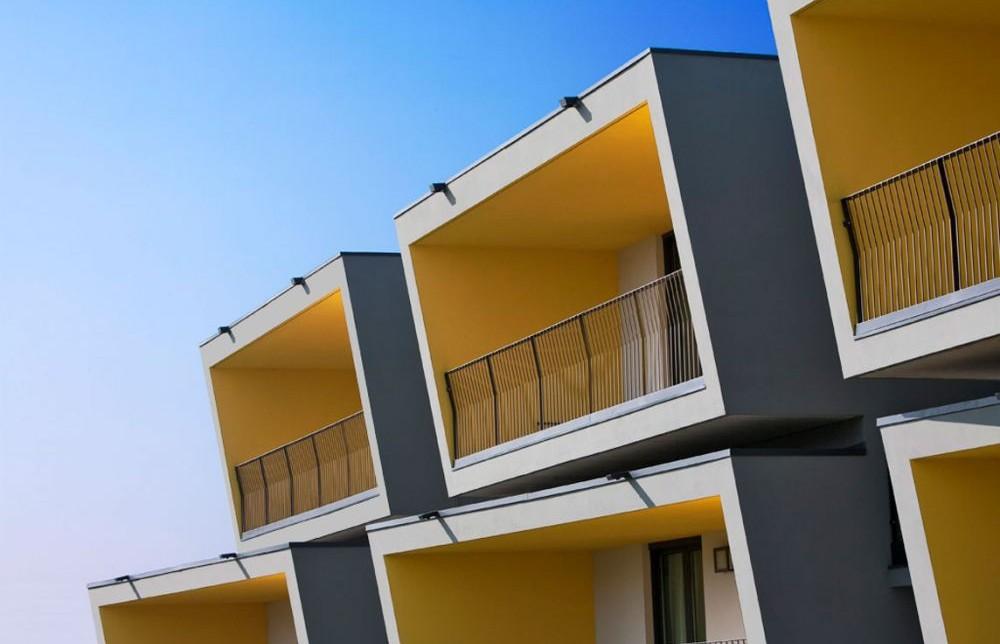 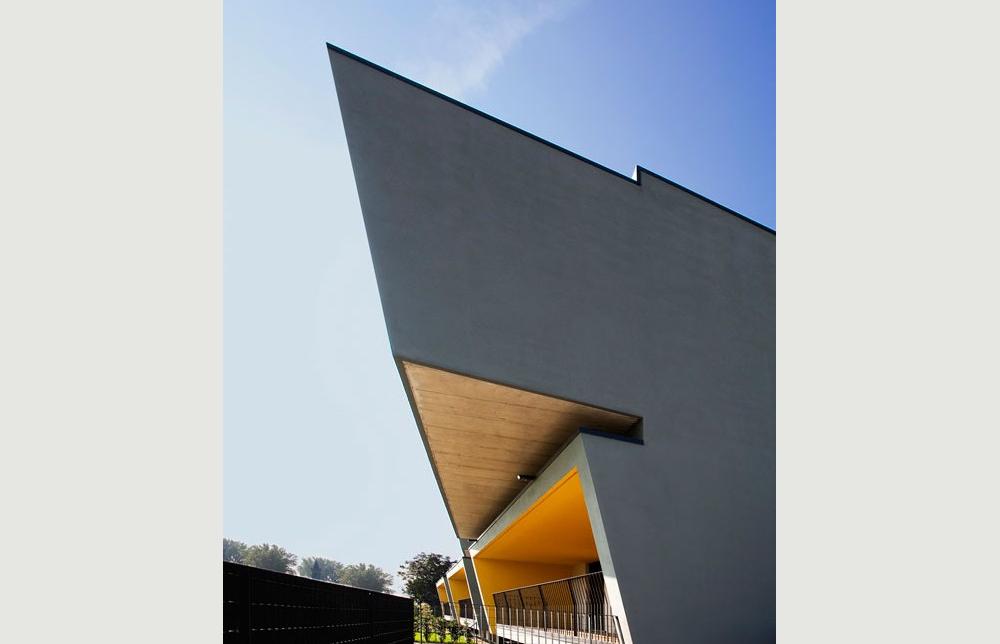 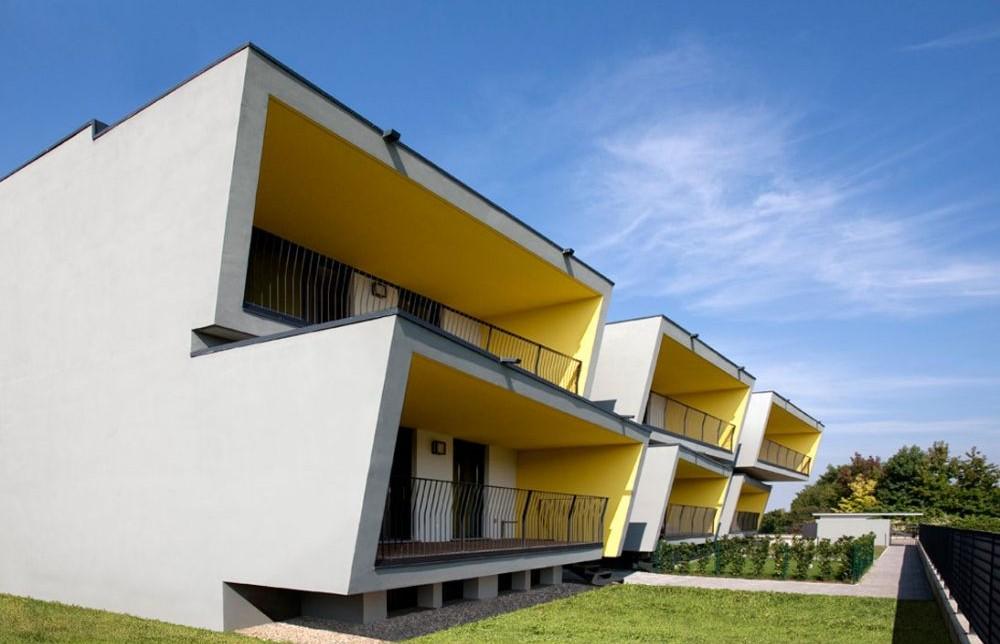 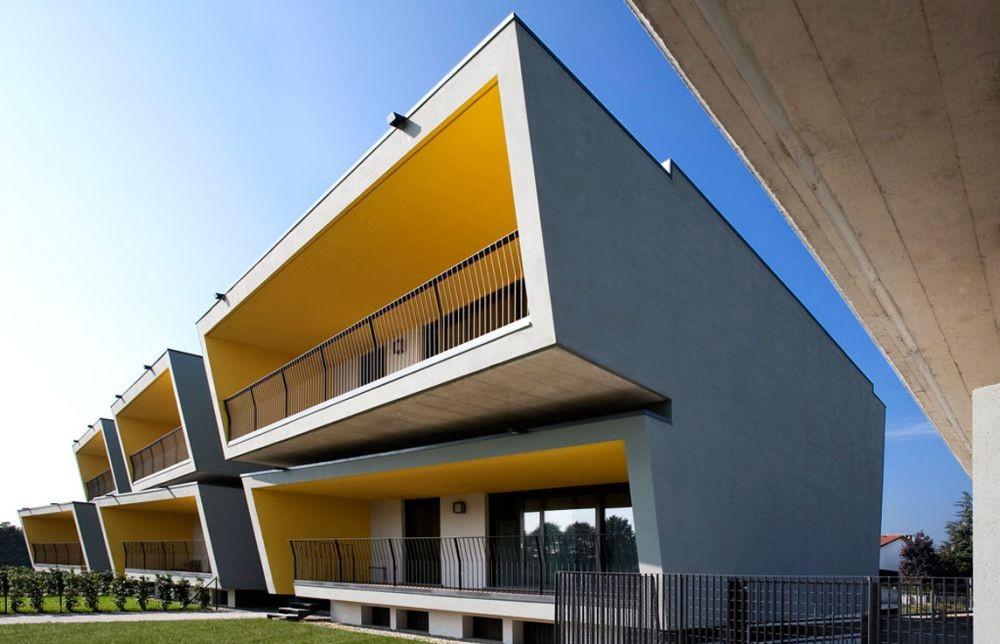 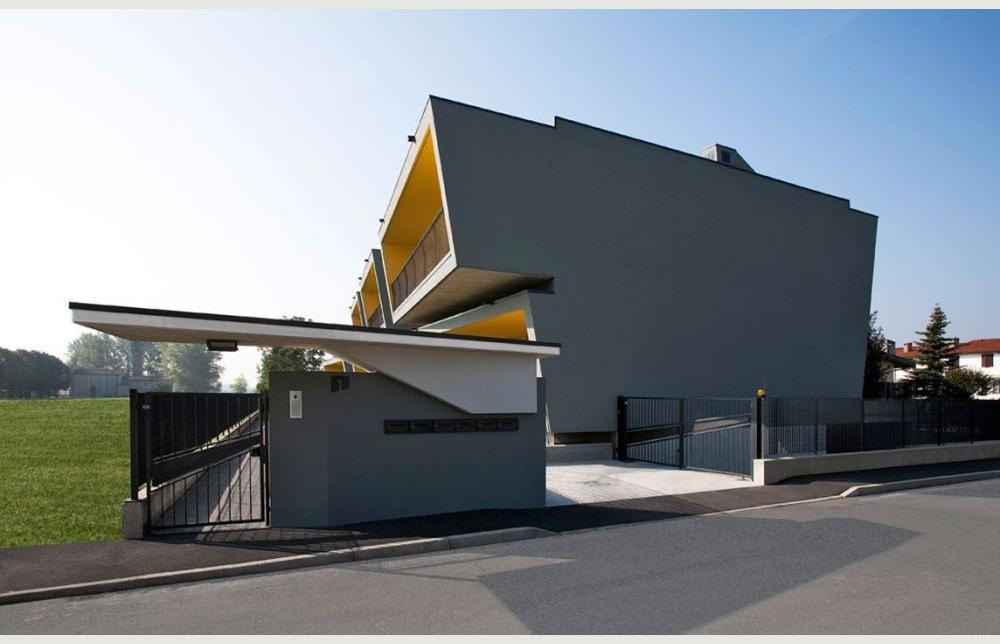 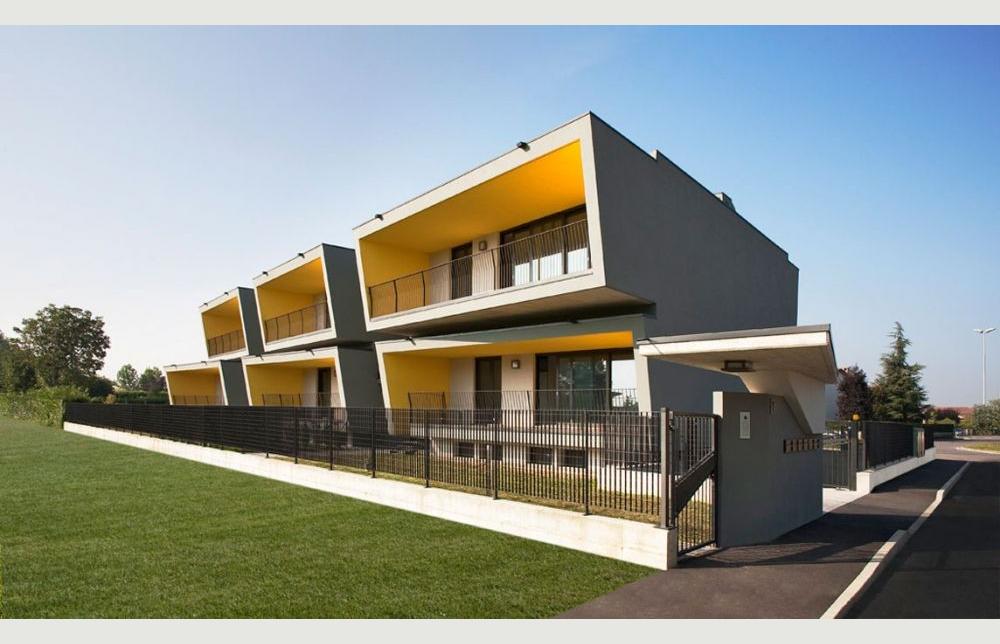 The Shift Housing Construction site has been completed in the Cremona area of Italy, designed by AquiliAlberg. The proposed typology recalls the rank houses which are manipulated and reinterpreted by the Milan Office to improve at best the site characteristics and the context, which is the natural park of Serio River.

This housing project is developed in an almost one thousand square meters area and it is composed of six apartments that grow two floors off the ground; in addition the first floor is lifted from the ground to ensure a best privacy and, at the same time, to project the apartment interiors into nature, which is in front of the main elevation. The concept came from a deep research firstly on typology and secondly on the general quality of spaces, orientation and relation with surrounding context. The primary aim of this study is the dialogue between Architecture and Environment, in order to achieve an high quality of living from the synthesis of artificial and natural elements.

Wide and deep private external ledges are designed to valorize the relation between the building and the natural site, these terraces add space otherwise not suitable for building and in addition improve the relationship between interior and exterior, gaining the maximum advantage from the beautiful view of the park.

Concept design is defined by a smart game of perspective to cope with the small dimension of the site and with the restriction due to the local building regulations. The two levels off the ground shift between each other thanks to two opposite rotations of 4 degrees, increasing the perspective effect which raises dramatically the depth of the point of view, adding considerably to the quality of the space.
This is the origin of the projects name: Shift Housing.

The scenographic effect is technically obtained by means of a simple trick: the basement of the main elevation, that grows out of the ground by 1.2 meters, rotates clockwise, while meanwhile the first floor of the main elevation rotates in a counterclockwise direction. Two volumes are generated with two opposite directions, which create a X shape facade. Designed this way for structural reasons as well, the existing void between the two volumes is a strong sign that emphasizes the perspective views, making the project incredibly dynamic.
The view through the natural park guides the main orientation of the building and the opening of the ledges. To complete the residential use, the green areas are studied deeply.

Private gardens help social interactions and make better vision from the buildings to the landscape, while assuring privacy too.
The green of the garden, filled with ornamental grasses, brings a quiet atmosphere and domestic peace.

The ledges, which have teak wooden floor for exterior, open themselves to the outside and create a direct relation with the context, but by means of the shifting floors, a high level of privacy is achieved for all apartments. These open but private spaces become finally a filter between the intimate dimension of the habitations and the external environment. Then, the first level has been raised up about one meter from the ground, to increase the level of privacy for its apartments. This vertical movement adds space to create openings which bring natural light to the large parking at the basement level.

Every apartment will have an open space: a double garden at the first floor and a large ledge at the next level.
So an innovative compromise between public and private space is defined, in which people could see themselves part of a small community but simultaneously safe in their private flats.

It is a housing project where the best aspects of community life, like sharing of services and green spaces, and on the other side, the comfort of a private villa, with independent entrances, gardens and balconies, are perfectly combined.
Cores divide the two main elevations in three well-defined areas and the outwards movement of the ledges is proposed on the rear elevation too.

The two main elevations are designed with a slightly different language because of their own relation with the context, but they have a close connection between each other. In fact, the two elevations generate simultaneously a symbolic hug to the Serio Park and a view to the urban area on the back.

Finally the result, with the big ledges one-span roof, is a strong dialogue and a seductive exchange between volumes and voids, lightness and dynamism.
The roof is designed to be flat to facilitate and drive to the installation of photovoltaic systems. In fact, from an energetic point of view, AquiliAlberg office, thinking about sensible habitations in continuous evolution, predisposed the building for the best integration of a photovoltaic system, which being designed previously it will be perfectly integrated in the architectonic project.

Coherently with mutations of the contemporary way of living, the exchange between human being and environment does not ignore the strong identity of the project, a necessary component to increase the sense of belonging of the inhabitants to a innovative model of sustainable development.