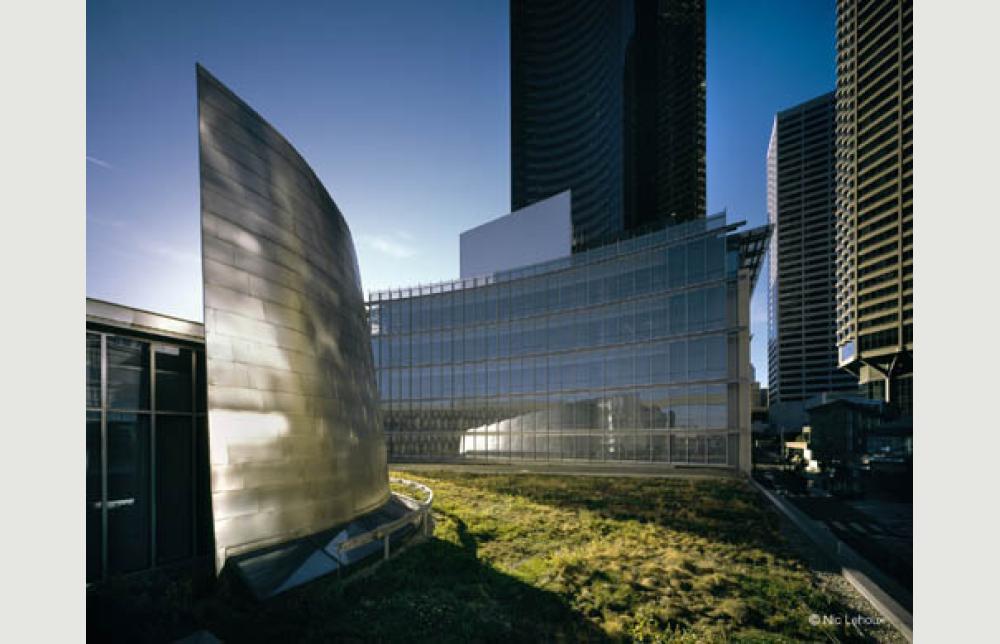 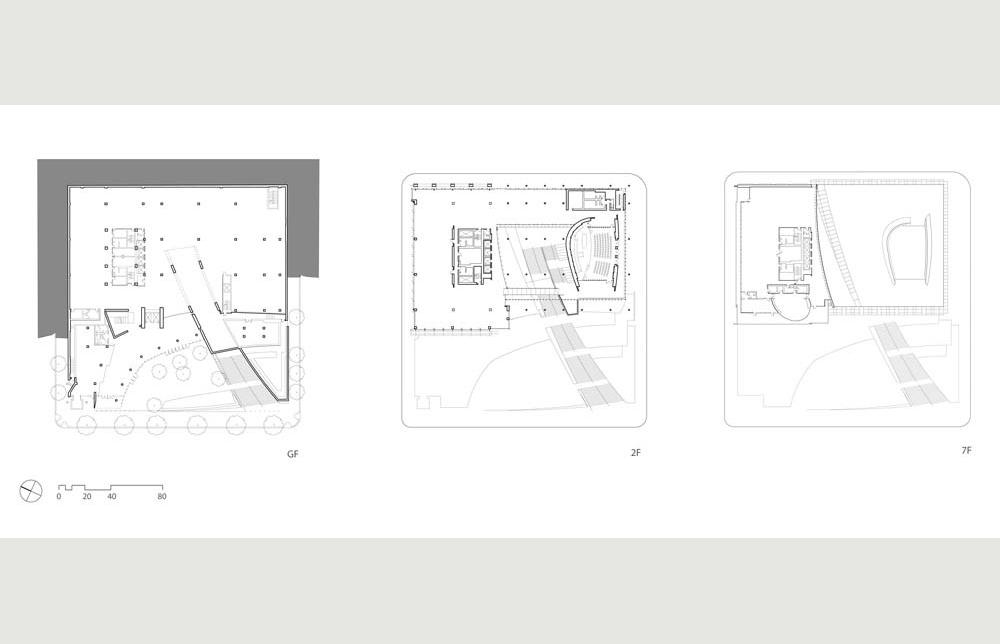 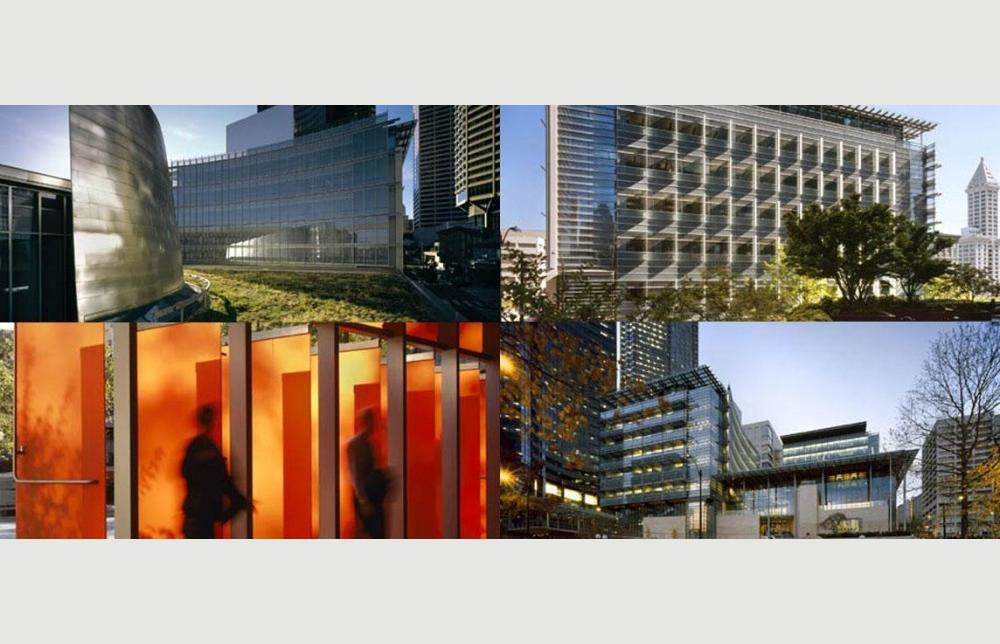 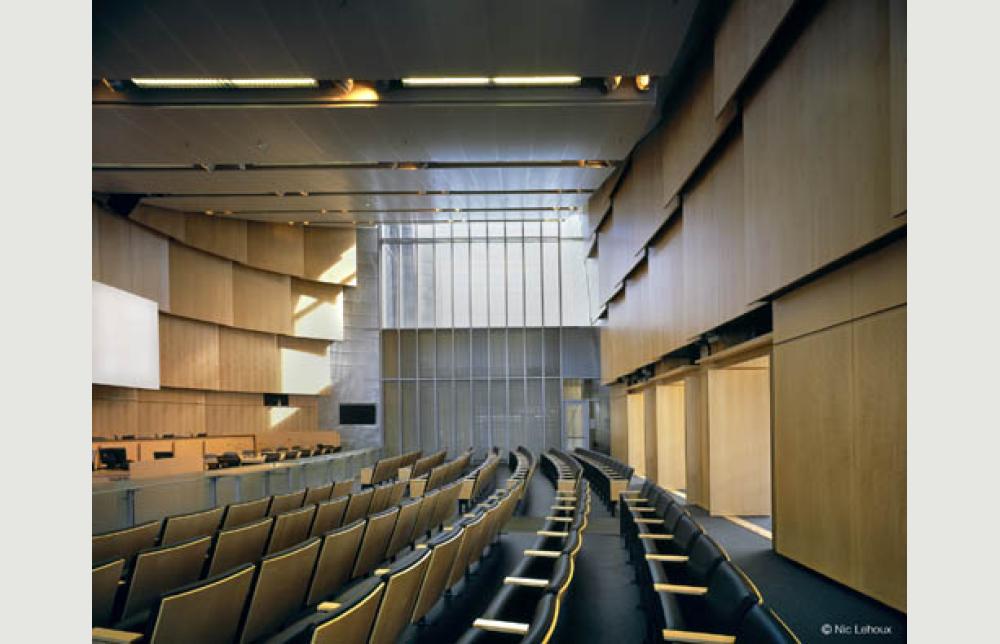 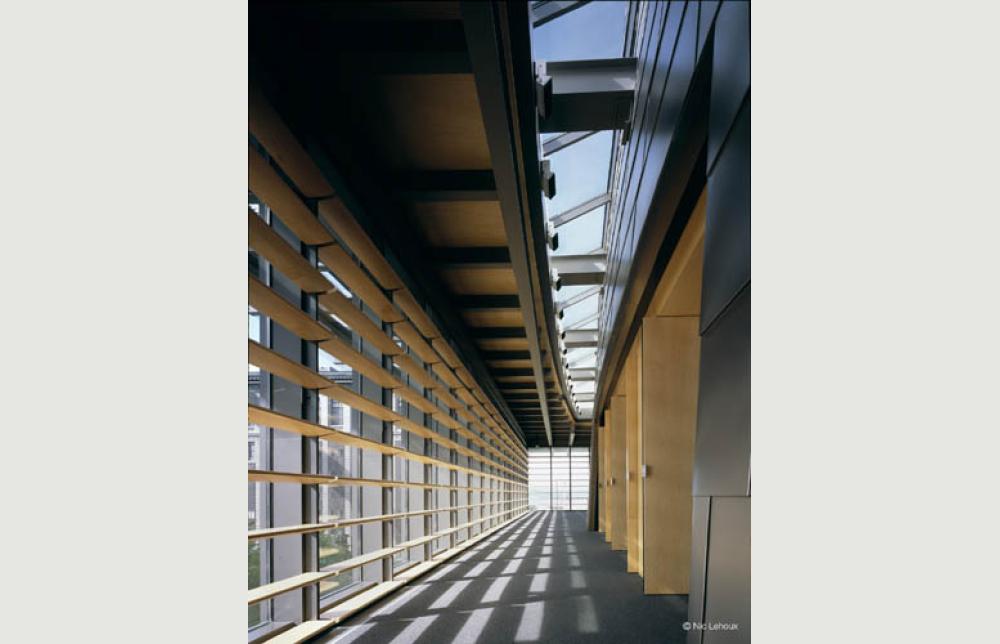 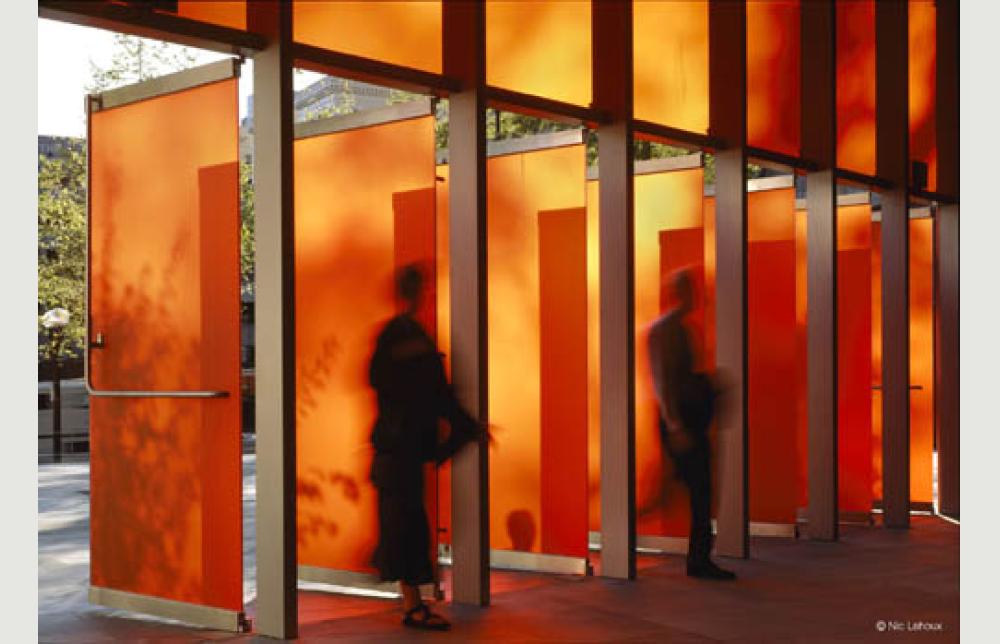 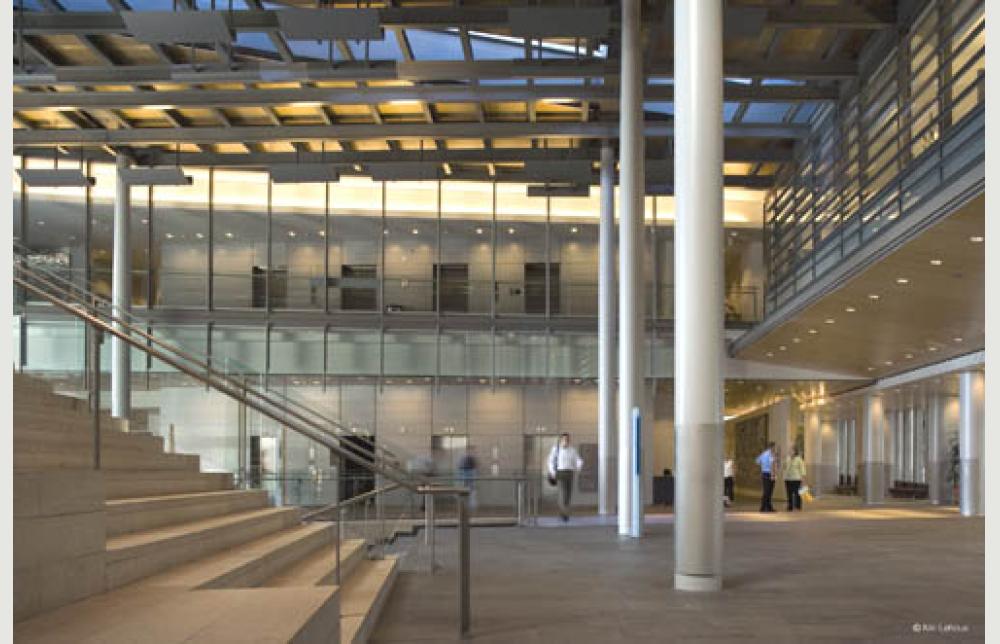 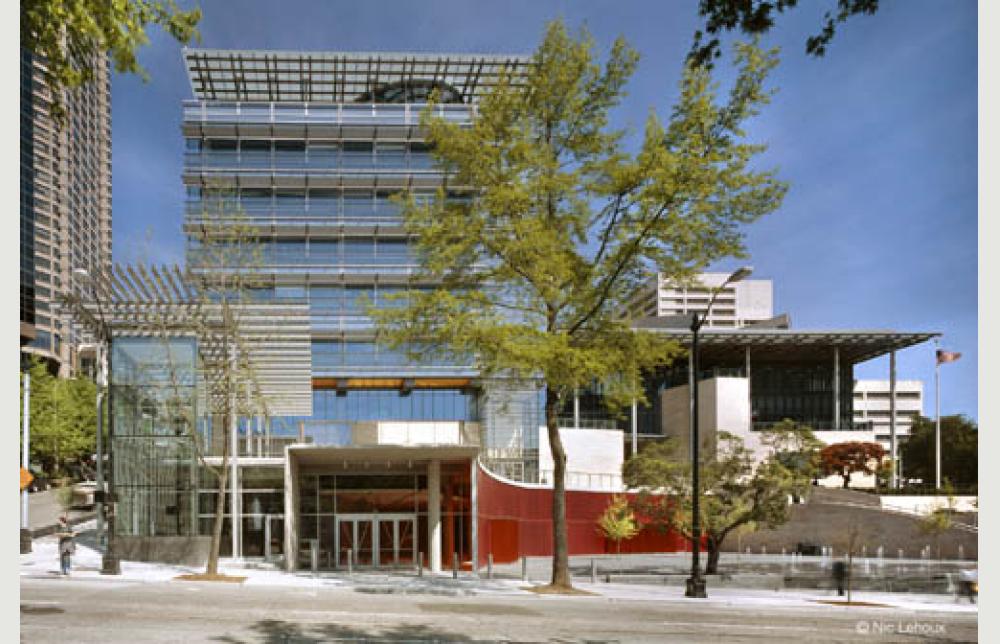 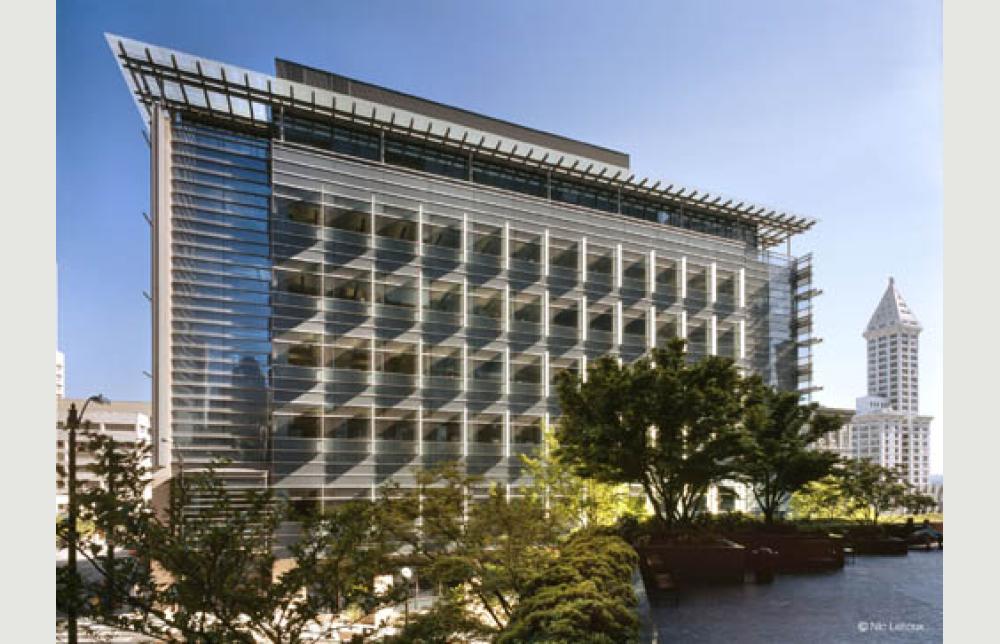 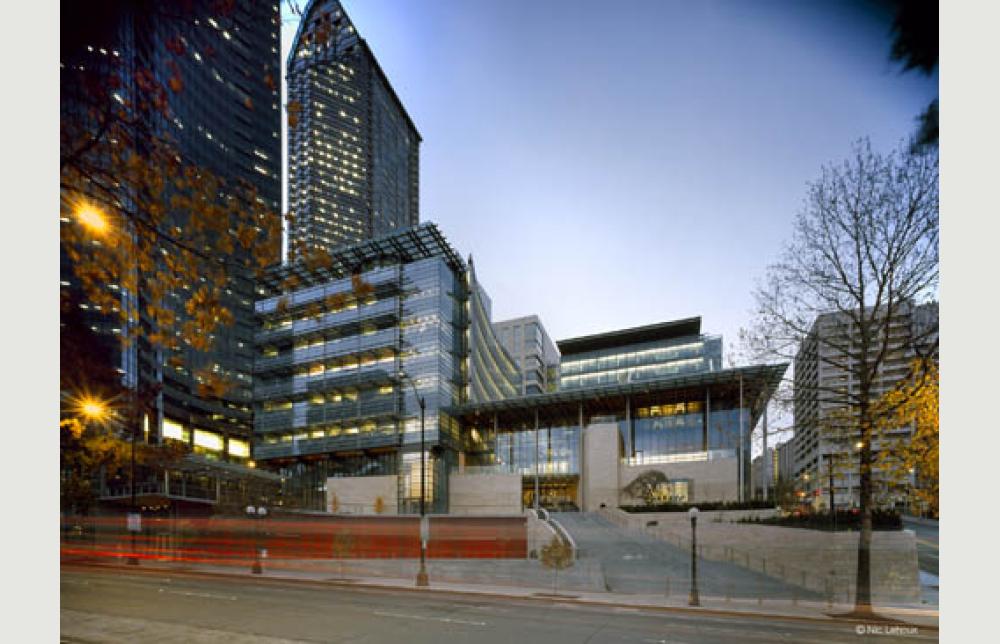 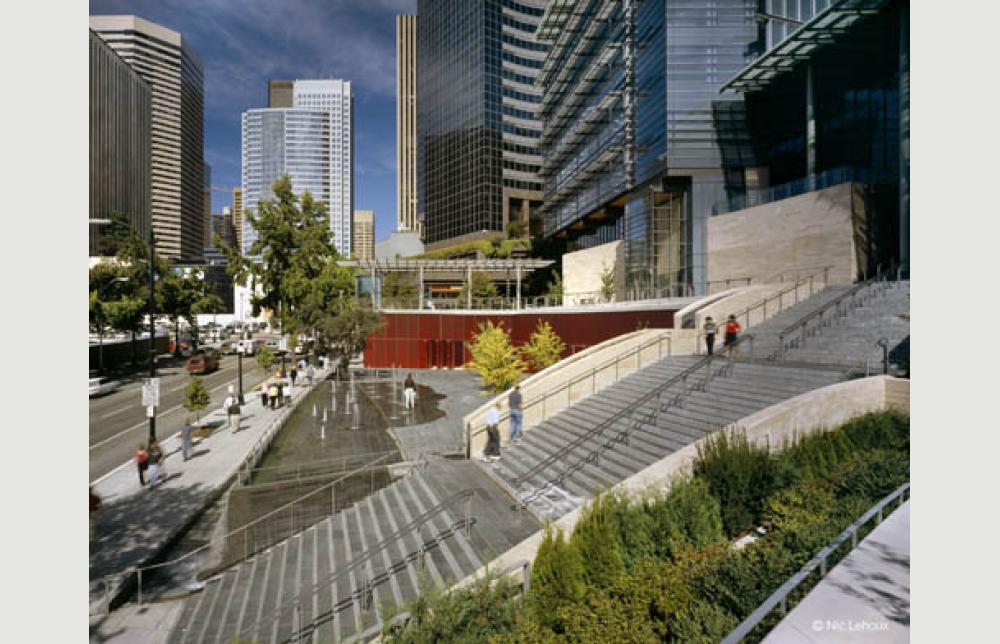 In the mid-1990s, the City of Seattle was faced with important decisions about its aging and seismically unsafe city government buildings. Renovation and retrofitting were found to be both too expensive and inefficient. Authorizing a 1999 master plan, city officials decided to consolidate city offices in a new Civic Center, a three-block development with City Hall as its focal point.

The City of Seattle set three criteria for the new home of city government: it should be open and welcoming to serve as a gathering place for citizens; it should exemplify sustainability and a respect for the environment; it should be permanent and lasting, serving its users for at least one hundred years. Seattle City Hall, through its cohesive and accessible approach, palette of natural materials, tectonic expression and sustainable building strategies, fulfills these goals and expresses the spirit of the Northwest in an elegant way.

The forms of the new city hall express the building’s two natures: the working institution is embodied by a seven-story executive tower, with the mayor’s office at top, while ceremonial and legislative aspects of city government find voice in the council chamber to the south. At the center of the composition stands the public realm, a soaring, skylit glass pavilion that welcomes visitors and offers a gathering place for direct interaction with city government. A public glass bridge by artist James Carpenter spans from tower to chamber, overlooking the Civic Plaza and landscape beyond. The rounded, titanium-clad council chamber pierces the ceiling, a strong form visible throughout the precinct and the city beyond. While the stone of the tower’s eastern façade acknowledges the new Justice Center, its other faces are glass, an extension of the public pavilion that also encloses the chamber. This transparency is an expression of open government, most powerfully expressed by the curved glass of the tower’s southern façade. This arc gestures to the council chamber and the plaza’s cascade and stair, and enlivens public areas on every floor. The jewel-like quality of City Hall’s delicate glass structure will help it hold its own against neighboring skyscrapers, glowing by night to become a civic beacon for downtown.

The steep site was constrained along the west third of the block by the existing Municipal Building, which would remain in operation until completion of the new structure. Though a challenge, this requirement made room for the Civic Plaza to rise from the original building’s footprint, and brought the new city hall to the top of the block, creating a civic plateau in a terraced landscape that offers sweeping views of Puget Sound and the Olympic Mountains.

In addition to improved facilities and seismic resistance, the building also achieves a high standard of sustainability. Ample glazing required high-performance fritted glass at the west and south elevations, and horizontal sunscreens at the west elevation. Vertical glass sun-catchers to the north and light shelves to the west reflect early and late sunlight deep into offices. Beyond daylighting to reduce the need for artificial light, an under-floor air distribution system and solar panels also help to reduce energy consumption. Rainwater is harvested in an underground cistern for reuse in the building and the irrigation system, while a “green” roof made up of a layer of soil planted with grasses will retain Seattle’s abundant rainwater and release it slowly, reducing storm runoff and helping to insulate the lobby from cold and buffer it from heat. These are among the elements for which City Hall has received a Gold LEED rating by the U.S. Green Building Council.

Ultimately, the design of City Hall seeks to create a lasting place that evokes Seattle itself, a city known for its love and stewardship of the environment, its reputation for technological vision, and its participatory attitude toward civic government. It hopes to build upon this legacy and look to the future as a source of great community pride for generations to come.