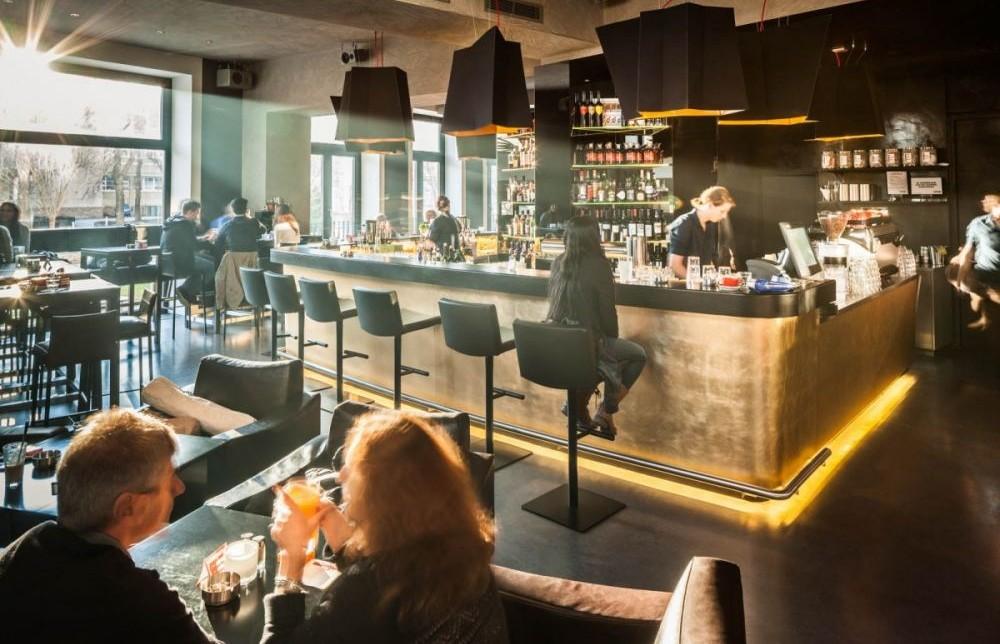 -Opening of the rooms-

When planning this building the instructors made a great effort to include all different requirements in the project without, however, neglecting the idea of a unified architectural line.
So when the general refurbishment on Bauernfeldplatz in 1090 Vienna started it was important to connect the different levels and to open up the restaurant towards the road space in the foreground.
A special element of the building is the 1913 built and still existing sun garden. Rather than putting it down because of his ongoing decrepitude we decided to keep and rehabilitate it. By opening the portals to ceiling-high windows, the sun garden now connects not only inner- and outer-space but also the different levels of the building.
Before constructions begun the rooms were unfavourable arranged in the building – the kitchen was in the mezzanine while the guest room was banished to the basement. Even the staircase was too old and dilapidated and offered no room for guests to pass on convenient.
With the remaking of the staircase a connection of all four levels (ground floor with basement and ground floor with mezzanine) and the rearranging of the rooms was achieved. So the kitchen had to go into the basement and sitting in the guest room you can now enjoy the nice view over Bauernfeldplatz.
The layout of the guest room is u-shaped around the building core. This evoked the idea of a visually dematerialization while using dark coatings and mirrors. In contrast, the bars and the four fireplaces are particularly emphasized in the room with gold coating of the surfaces and staged.
The guest room on the mezzanine floor does not only offer a smoking and a non smoking area, it is also set 2,40 meter above the road. By removing the parapets and putting in windows that attach the floor to the ceiling, the room gets floated with light and air and opens up towards the street space.