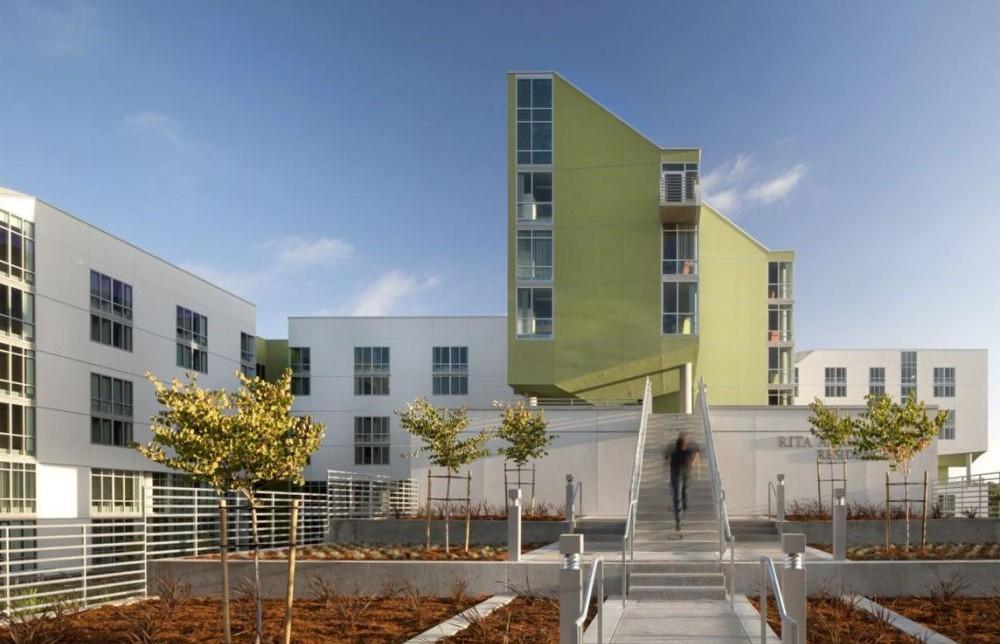 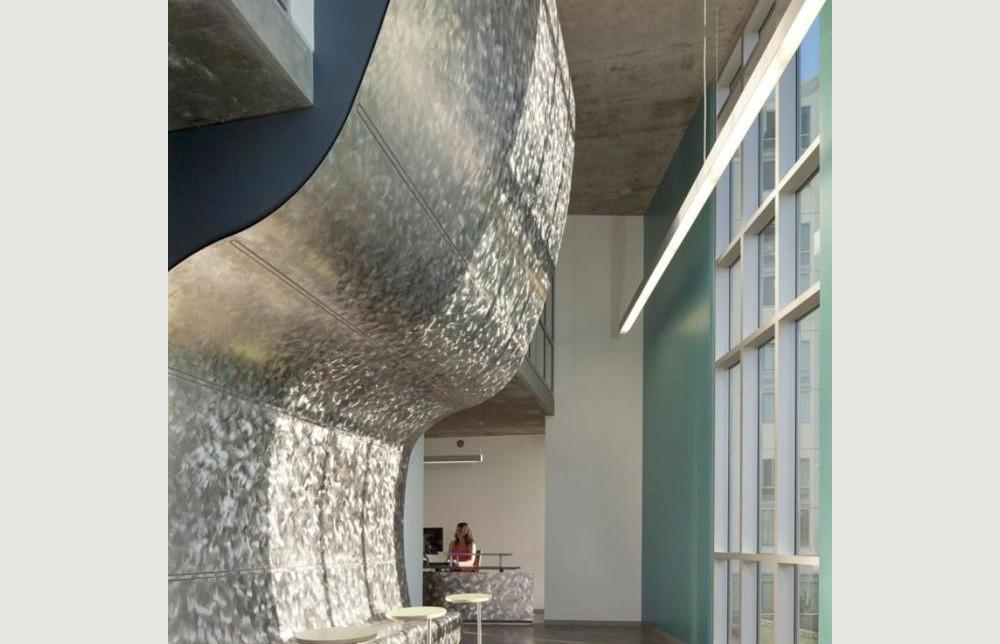 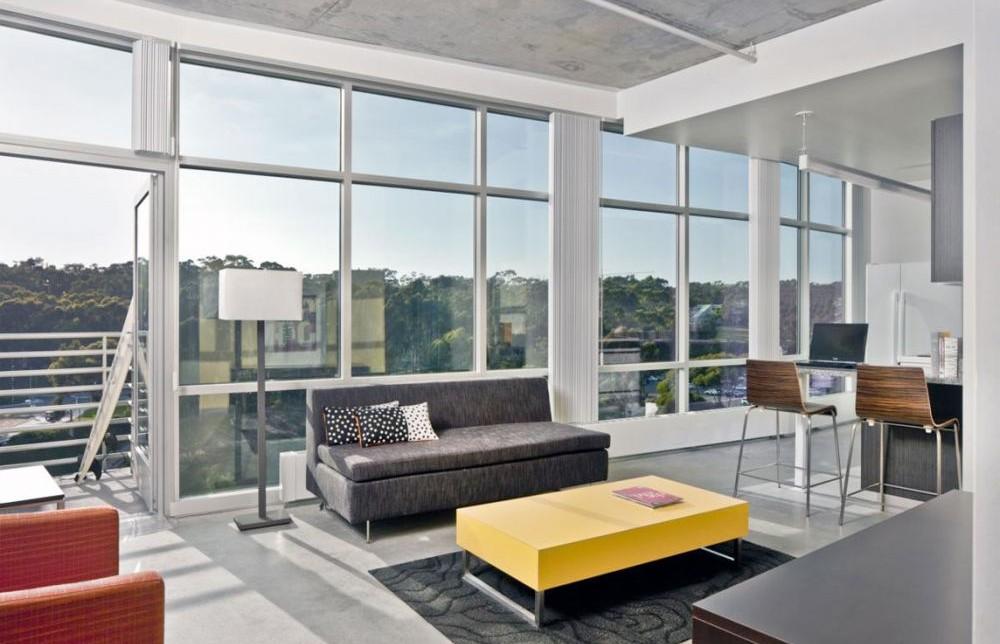 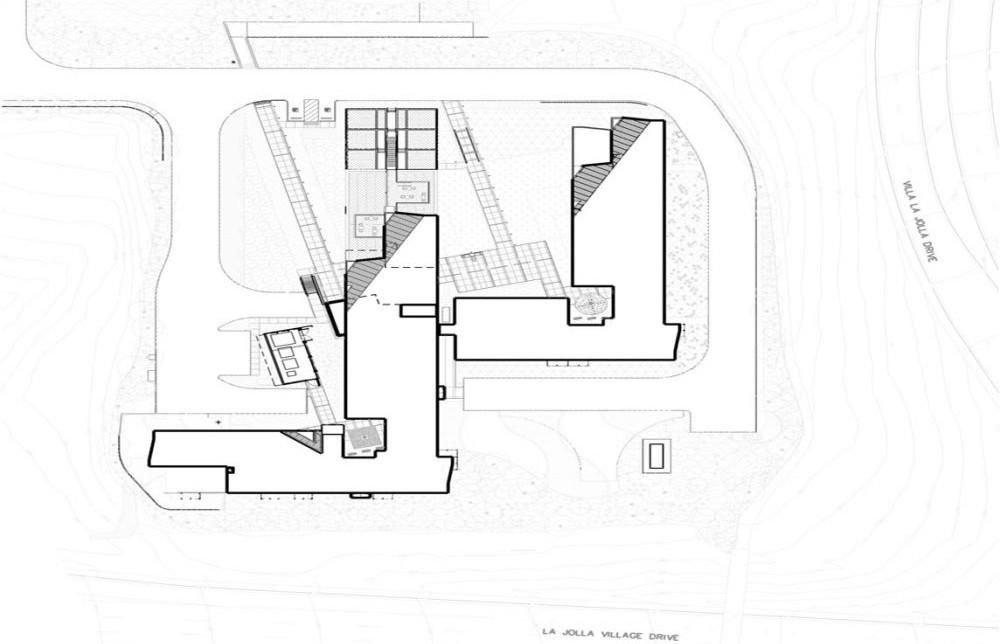 Faced with a projected increase in the enrollment of graduate and professional students, a shortfall of on-campus residences, and the goal of housing half of the student population in campus facilities, the University of California, San Diego UCSD, sponsored a design competition to develop a new graduate student housing building with a total of 226 units. Each architect participating in the competition was teamed with a builder who would guarantee the cost to the university. The design needed to help recruit top students, convey the universitys reputation for innovation, and enhance the overall educational experience on campus.

To gain insight into UCSD students, Valerio Dewalt Train Associates VDTA sent one of its young designers on an undercover assignment to immerse herself for two days on campus, sitting in on classes, walking through campus, and speaking with students. Her findings helped inform VDTAs design. After two rounds of the competition, the team of VDTA and Webcor Builders were awarded the project.

Located on a promontory at the main entrance of campus, the building serves as a visual icon.
The program consists of 225 two-bedroom units and one three-bedroom managers unit. With an average unit size of 725 square feet, the building totals about 225,000 square feet on nine floors. The post-tensioned concrete frame, stucco-clad building has an urban quality, with exposed concrete ceilings and floors and a LEED Gold designation consistent with UCSDs desire to increase the density of its campus and implement sustainable strategies.

A key design challenge was to make the building serve as the visual terminus of the future medical campus mall. The campus master plan calls for the mall to be lined on either side with academic buildings, one of which has already been built. The site for the graduate housing is at the south end of this mall, where the land begins to fall away towards La Jolla Village Drive. The site is about 30 feet below the level of the mall. To provide this visual terminus, the design balances distinctive architecture with the pragmatic considerations of budget and program.

In keeping with the informal nature of the Southern California campus, the design avoids the typical approach of having a symmetrical tower serve as terminus. Instead, it is decidedly asymmetrical. The main, nine-story, L-shaped tower points towards the mall to the north and the ocean to the west. The U-shaped space that acts as the terminus is completed on the west edge of the space by a wall of eucalyptus trees. The second, seven-story, L-shaped wing nests with the taller wing to form a three-sided eastern courtyard, creating a space for the residents which maintains a sense of being secluded while remaining a part of the larger campus.

To lighten the buildings presence on the landscape, the ends of the wings are elevated and shaped to help minimize their apparent mass. The form of west wing is clipped to sculpt an offset V from the north and the west arms of the L. Marking the center of the V is a narrow tower marking the centerline of the mall. The east wing is similarly clipped. The short ends of the wings are colored the shade of eucalyptus leaves, contrasting with the nearly pure white elevations and helping break up the apparent mass. Clustering windows further creates the illusion of a smaller building.

The entry to the residence lies three stories below the level of the mall, decreasing the perceived height of the building from nine to six stories. The third floor is topped with a green roof, which extends the plane of the mall and serves as a courtyard, while reducing stormwater runoff and providing insulation. The first floor includes a bicycle room, which makes it easier for students to choose alternative transportation. The second floor incorporates the lobby, building offices, and student services. The fourth floor houses vending, laundry, and fitness rooms. For the convenience of staff, service spaces are immediately adjacent to the elevator tower, which is centrally located at the connection between the two wings. At one end of each corridor, and at both ends where possible, extensive glazing floods the circulation space with natural light.

With some variation, there are two typical room types: inline apartments and apartments at the ends of the wings. Each two-bedroom apartment has one and a half baths, a closet, a built-in study desk, a queen-size bed, a dresser, and a night stand. Interior finishes are kept to a minimum to conserve material resources and convey an urban aesthetic: concrete floors are sealed but not carpeted and concrete ceilings, columns, and walls are largely exposed.

To capitalize on the unique quality of light near the Pacific Ocean, the design team ensured there were very few north-facing apartments, allowing the vast majority of units to receive direct sunlight. Because many students hang bathing suits and wet suits in their apartments to dry, potentially causing moisture problems, the mechanical system provides a low flow of fresh air 24 hours a day. Operable windows also provide natural ventilation.

Every aspect of the design is intended to support the student experience at UCSD, through sustainable strategies, an urban form that is both a casual and a formal response to the surrounding campus, and a number of indoor and outdoor spaces that will encourage a sense of community among the residents.

The project was completed on budget, a year ahead of schedulein time to open for the Fall 2010 academic year.