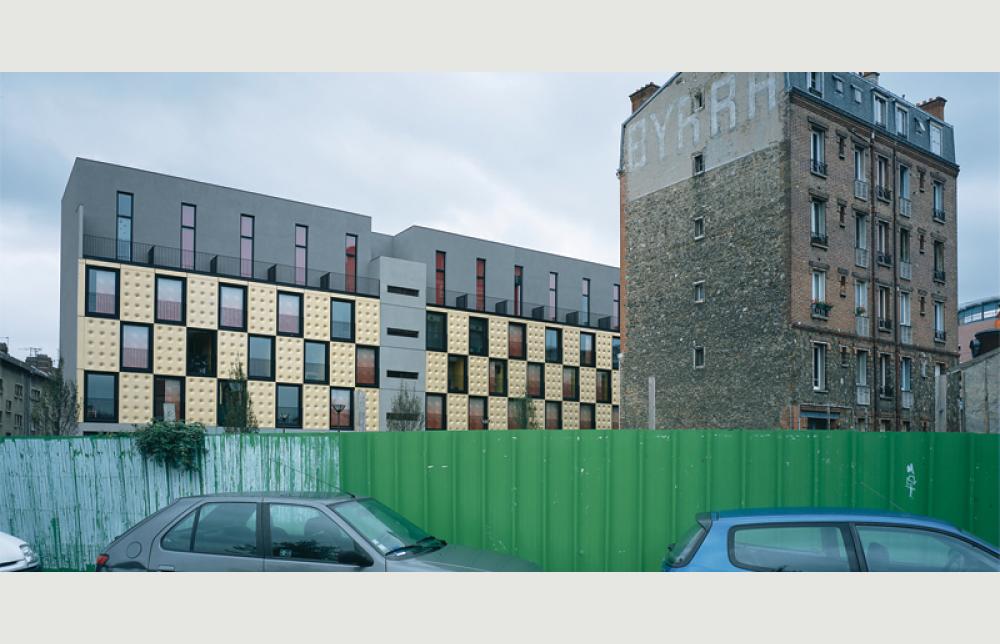 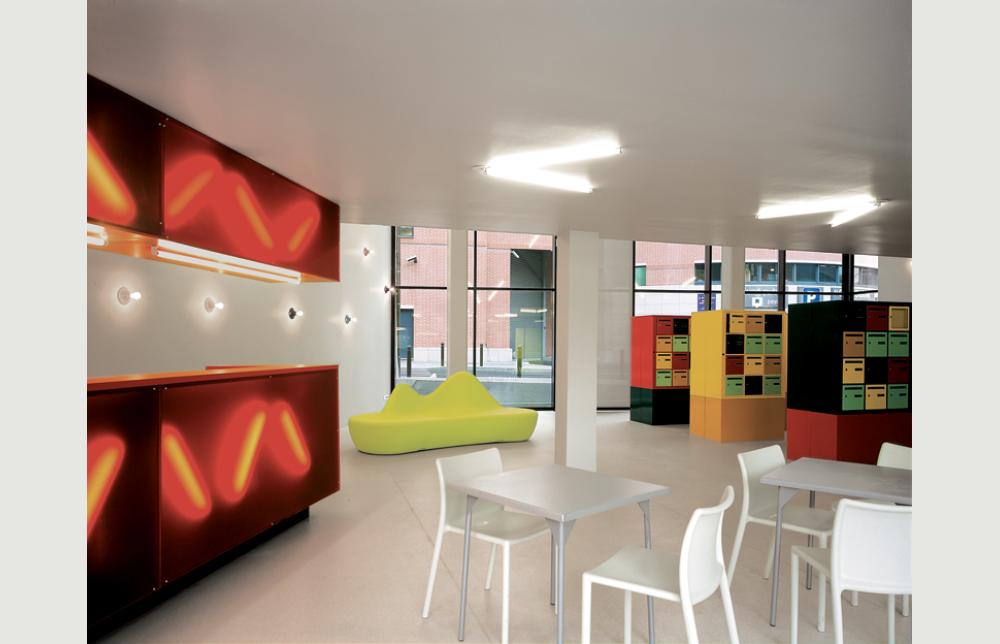 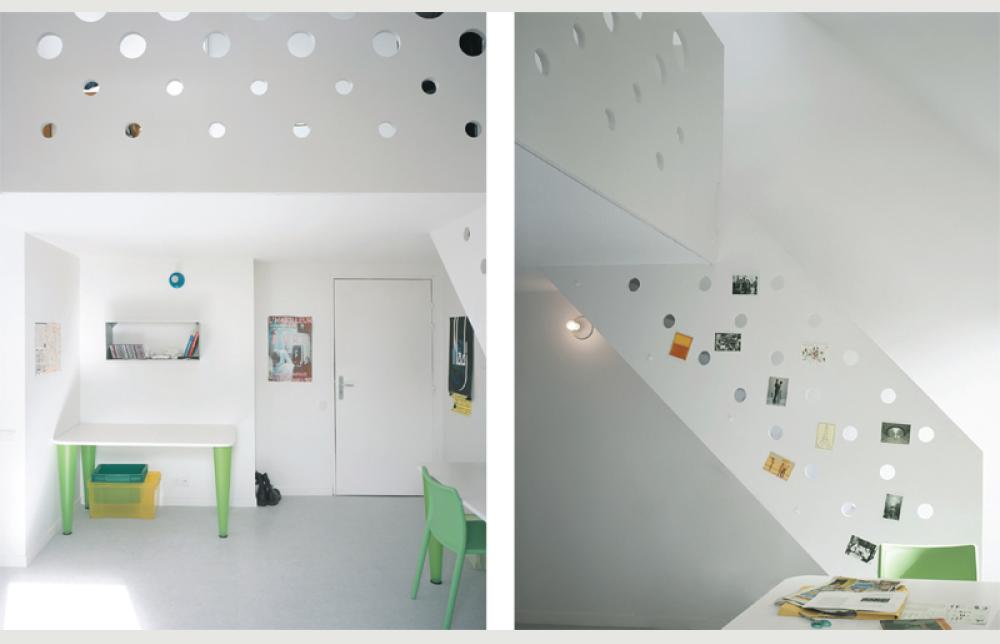 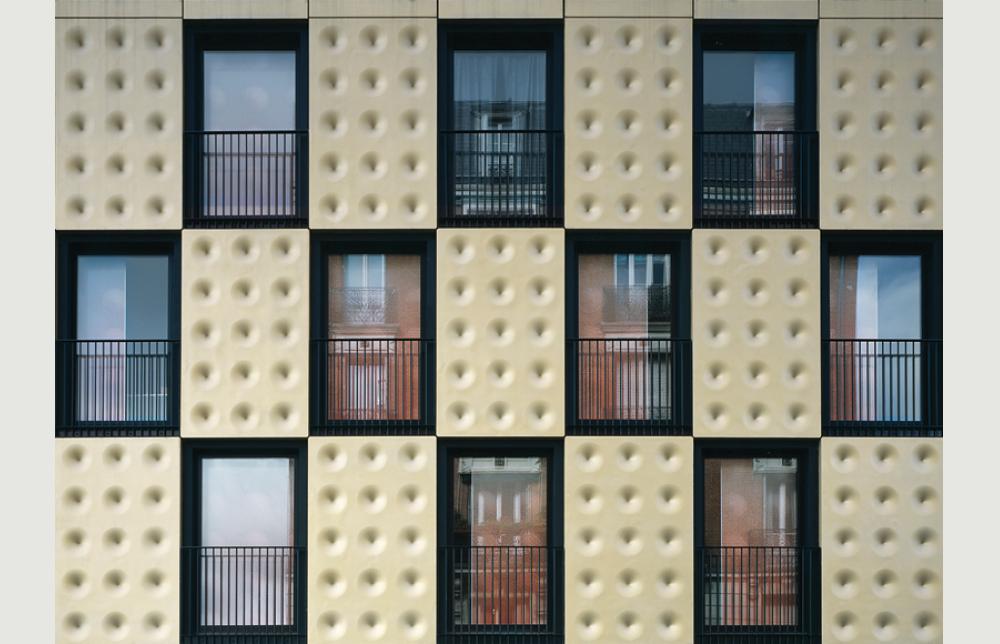 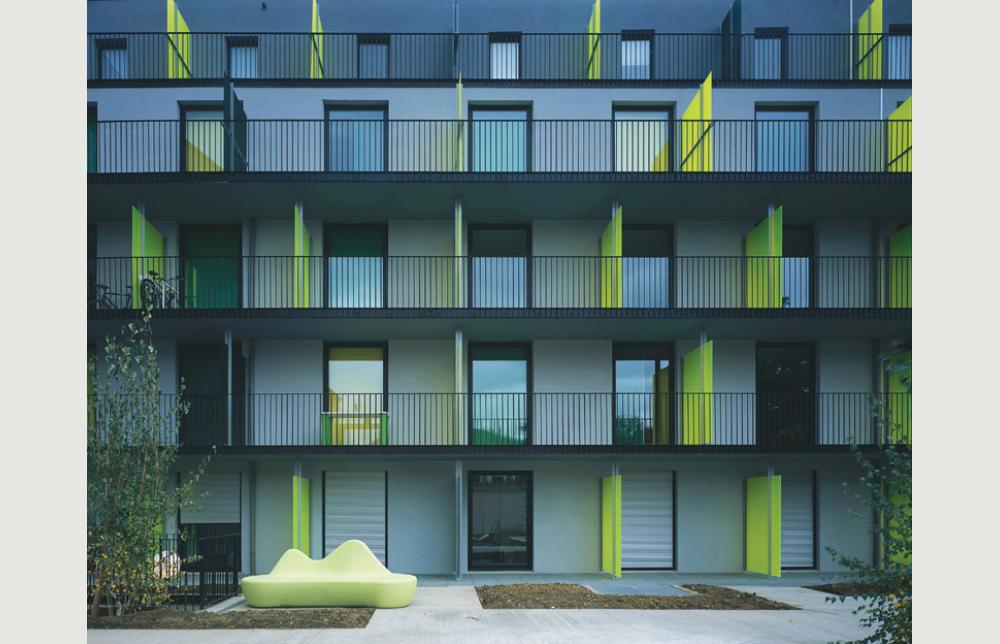 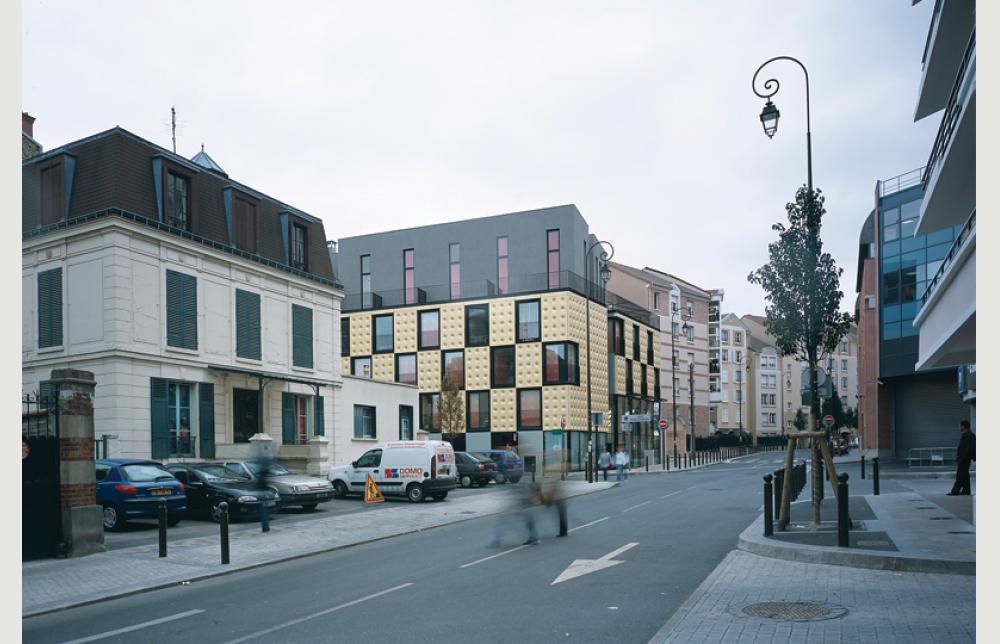 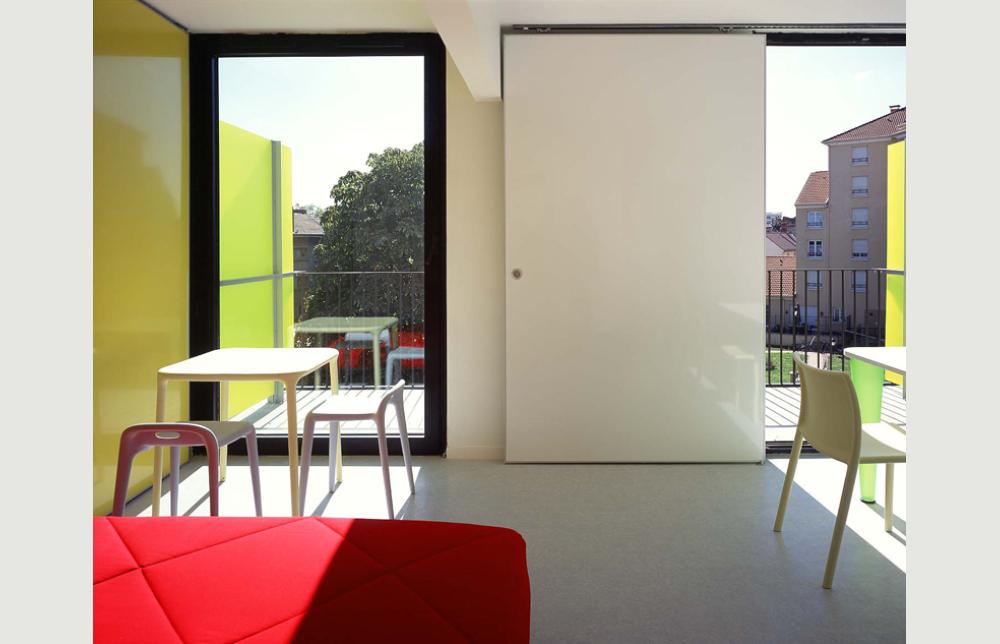 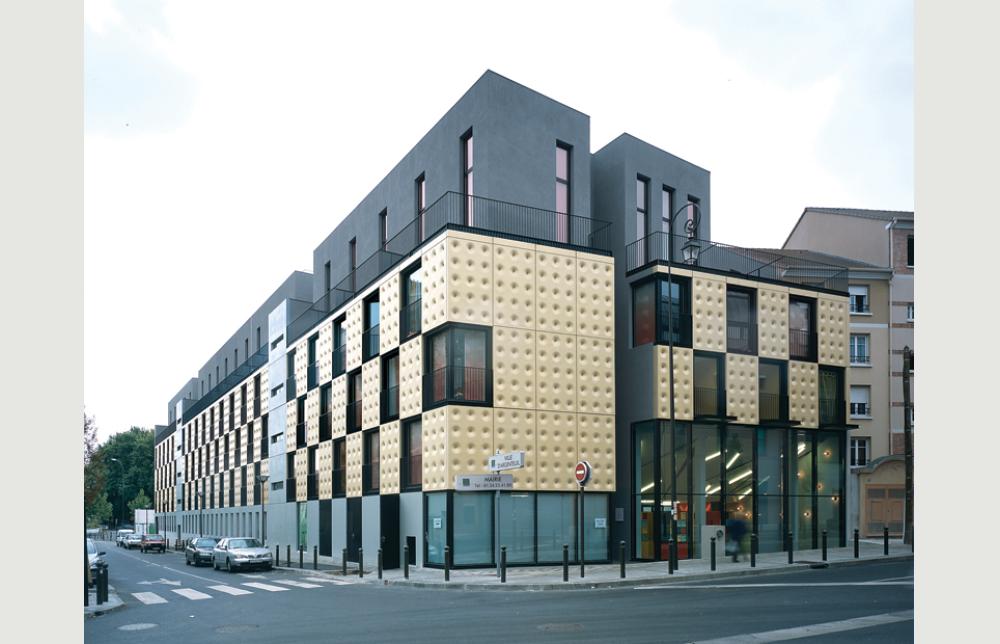 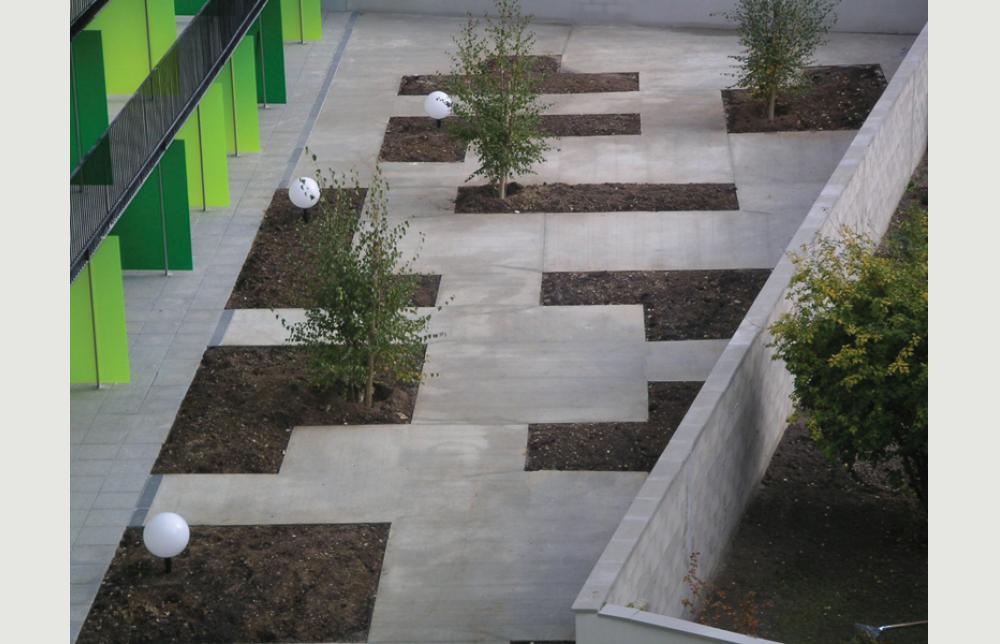 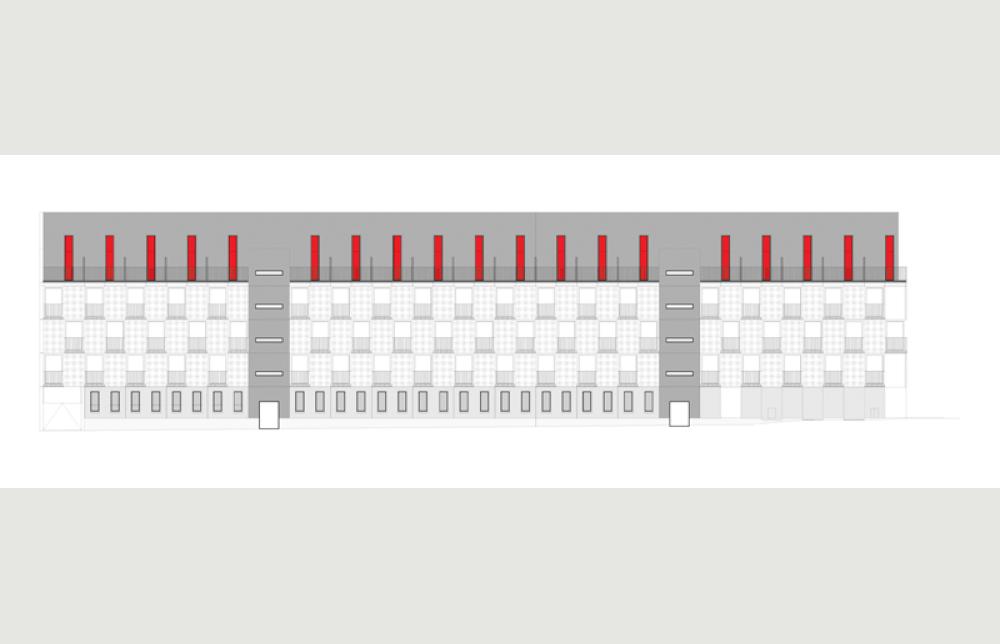 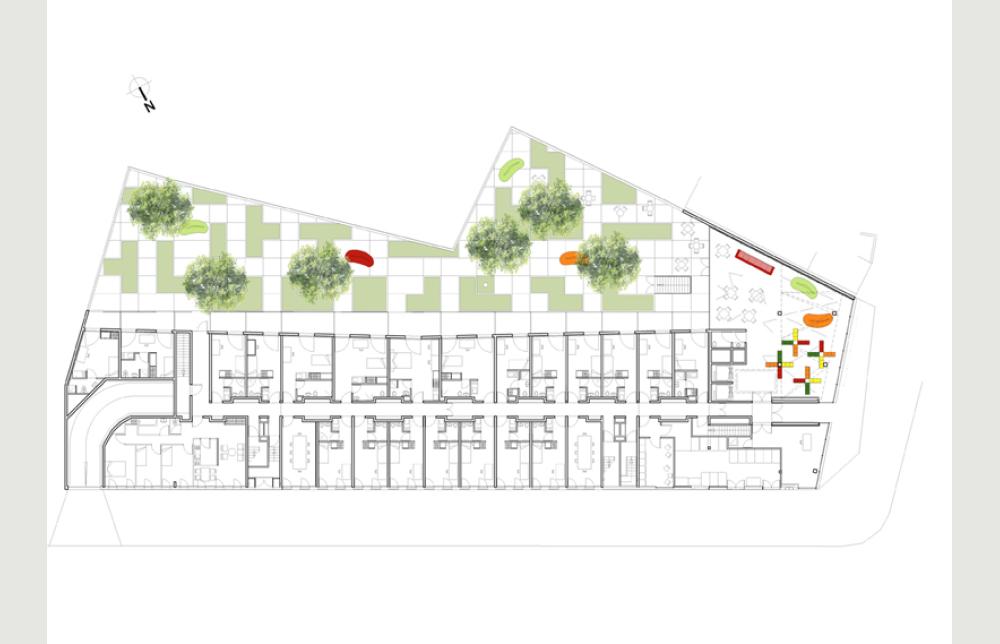 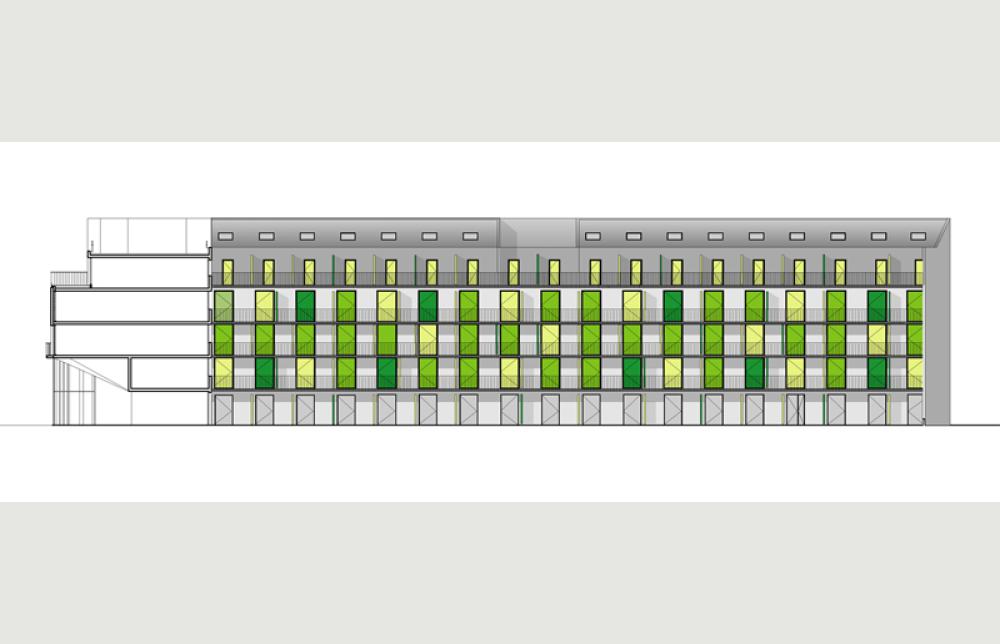 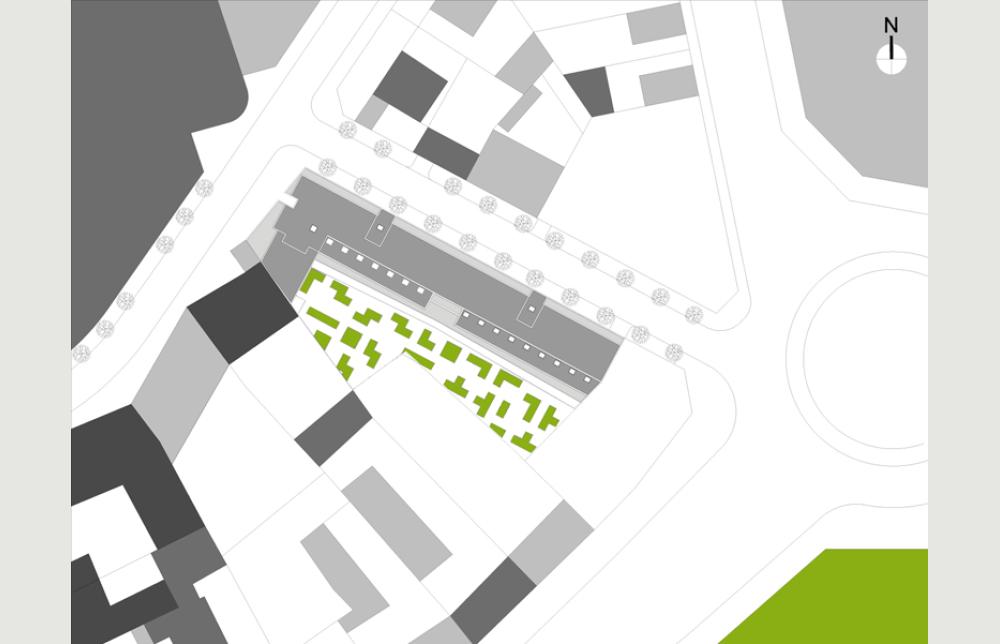 164 social housing for students: housings specifically designed for residents who have same age and education level. The building fronts display monolithic figures : toward the north, featuring a common structure, there is a standard module : 320 x 275 mm repeated in every apartment. This shows a perfect and symetric distribution on the facade area. Getting an overall look displaying a sense of harmony is one of the key constitutive points of this housing project. Rhythmic changes, sequences strictly repeated or accelerated : there are several ways to create variations and break down monotony. From one angle of the building to the next, the facade alternates with checker display, except for walls and floors. All appartments have half of their external facade exposed to natural day light thanks to a large door that can be shut with an internal shutter. The shutters are printed copies of the facade design, gold red colored, and pixel style. Glancing at it from the street, you will get a perception of rather complex design. Residents can make use of the shutters as magnetic boards on which one can write, highlight paste text or images.

You get to the residence through a prolonged opening by horizontal roads, which cut the building in two length ways. This figures a separation line between North and South, transition between the wing offering a view on Careme Street existing buildings and the western side with the hall and garden facing the bricks of the “ZAC” commercial center. On the west façade, located above the hall modules are decomposed in a rather hybrid geometry. The building is splitting itself to find a sense of urbanity in a landscape encompassing a R+4 brick wall, access to a parking lot, Parisian style housings, power transformer from the French Electricity Board covered with antique pediment and a nice private Paris style house preserved under the ZAC program management. On the south side, housing are extended with balconies of 8 to 15 m², designed to allow a garden table.

The façade of the building displays a balanced pattern of full and empty spaces, gray and neutral elements outlined by colourful separation lines. This particular design exhibits tinted clouds harmonized with the coloured shutters of the housings. Located at ground level is the Tetris garden: it is made of concrete paving slabs decorated with geometric figures of thick carpet moss (planted in November). Artistic expression is a style or syntax similar to street side facade, evoking an artificial landscape designed to look more natural. The hall is the intersection between street, access ways and the garden. On the right, first the mailboxes looking like a colourful maze, and then a bar with a garden extension. The laundry will be a nice living place, where one can meet people and chat. The plan is to paint it orange and to get a sofa and a coffee machine (soon to come). The access ways are horizontal and functional and designed to alternate main doors, and doors providing access to lift / technical shaft. The use of space in public area/corridors is reduced to minimum requirements. Paradoxically framework consistency and facade strictness composition allows flexible living space combinations, with more than 113 different types out of 164 housings nested in the residence hall. Apartment area, simplex or duplex type is contained between 17 and 40 m². The building façade is mainly glass windows equiped with sliding shutters : this results in a well balanced appearance of full and empty space.