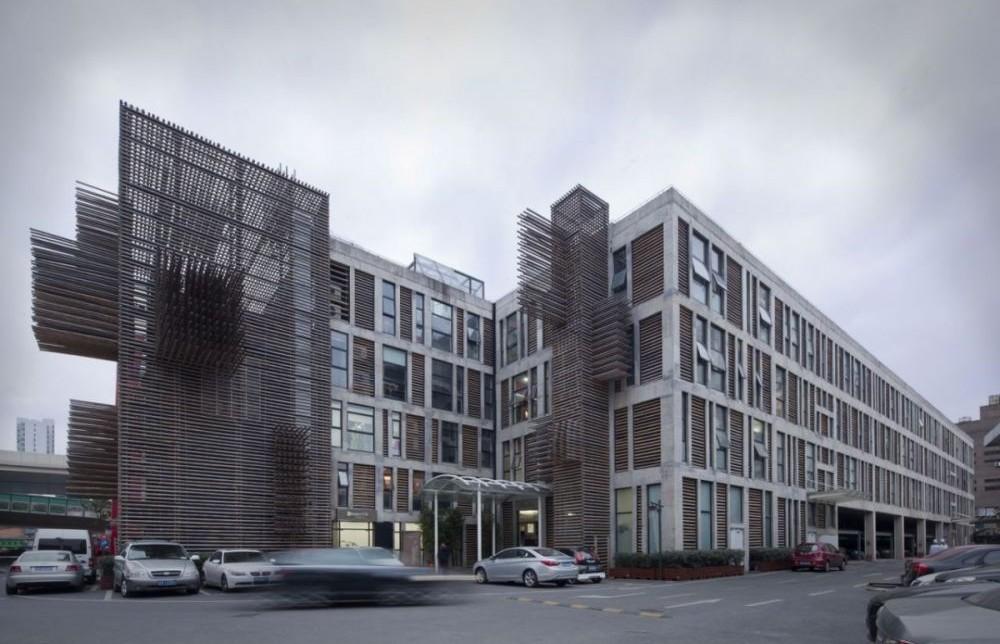 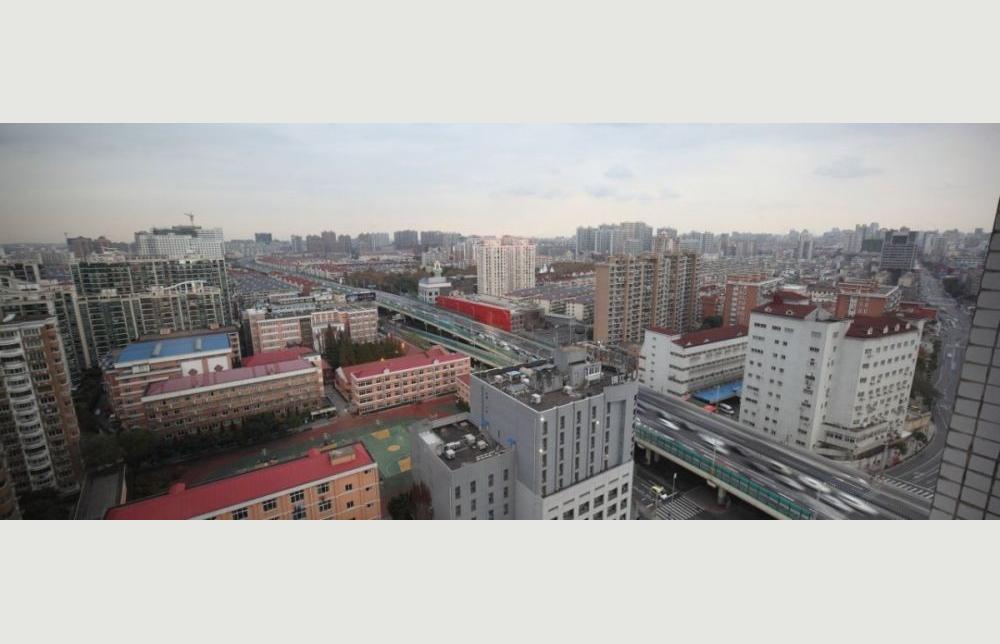 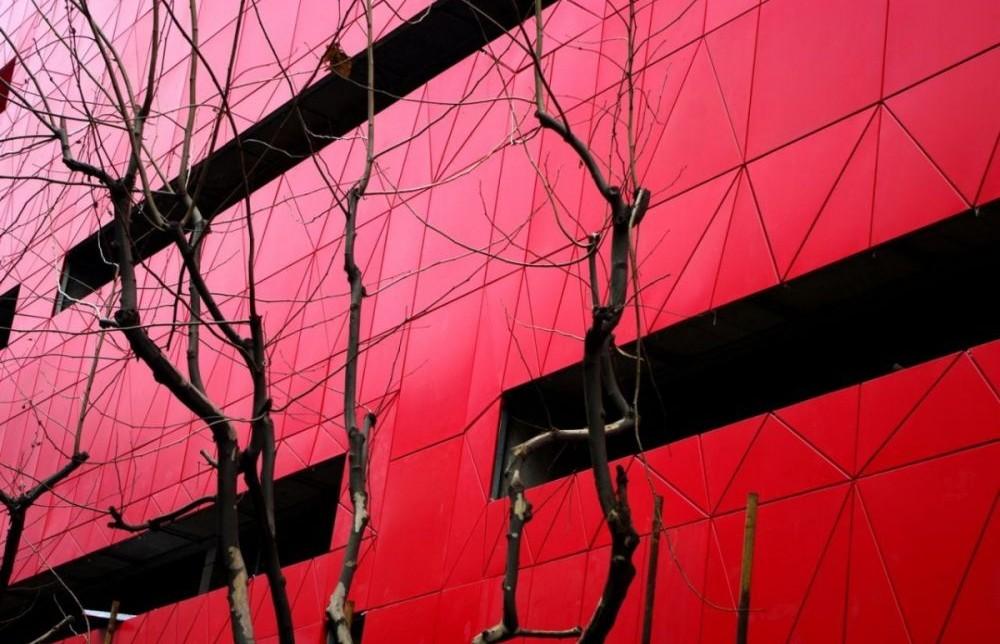 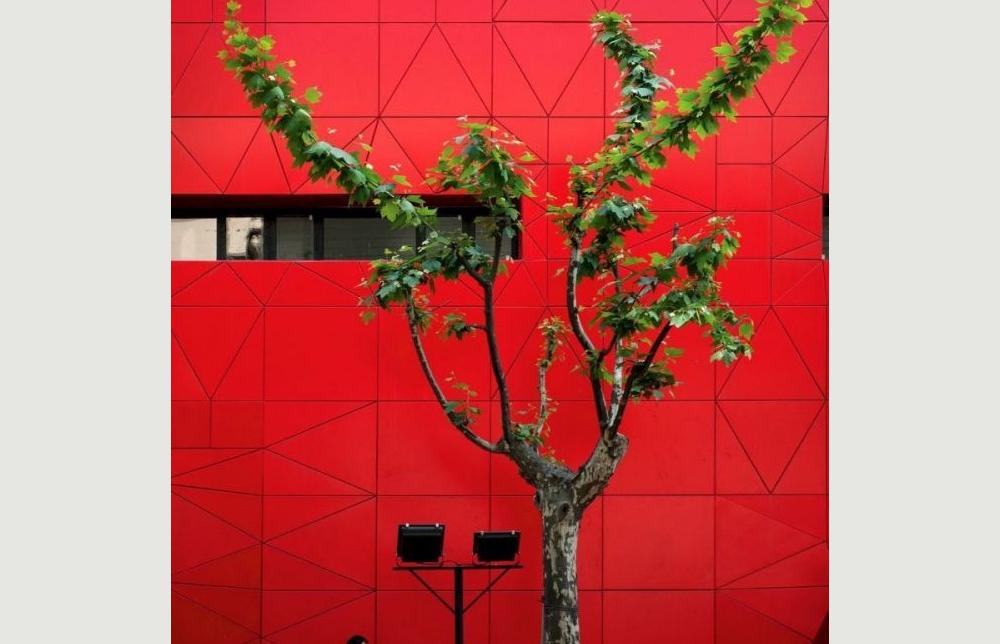 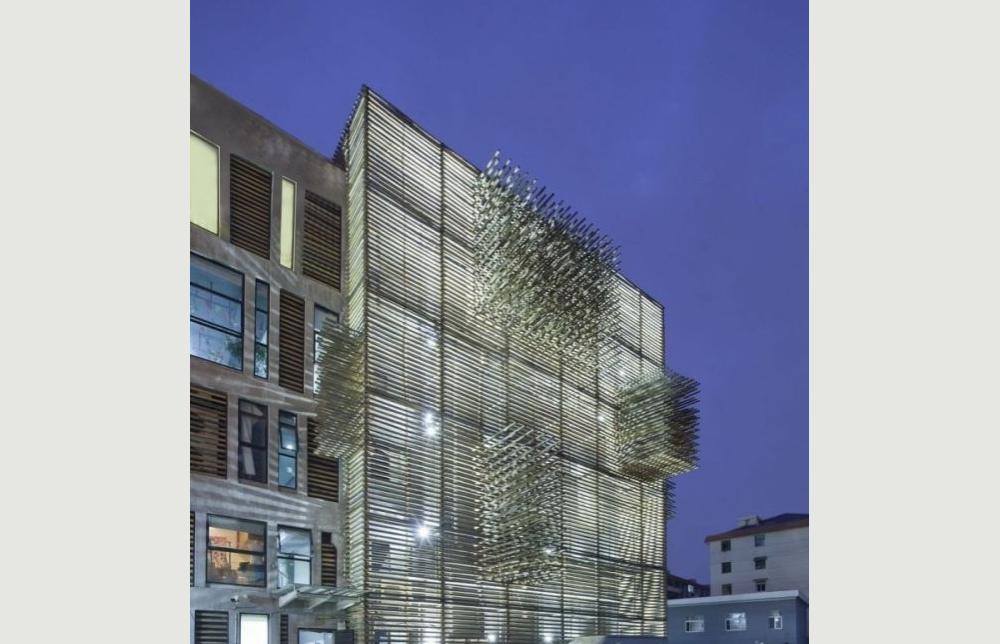 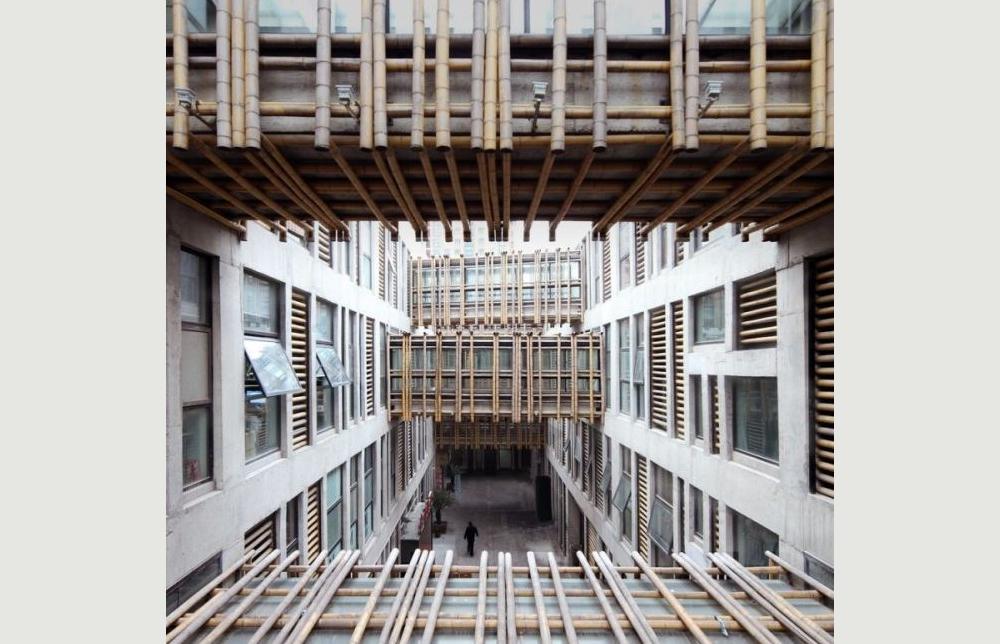 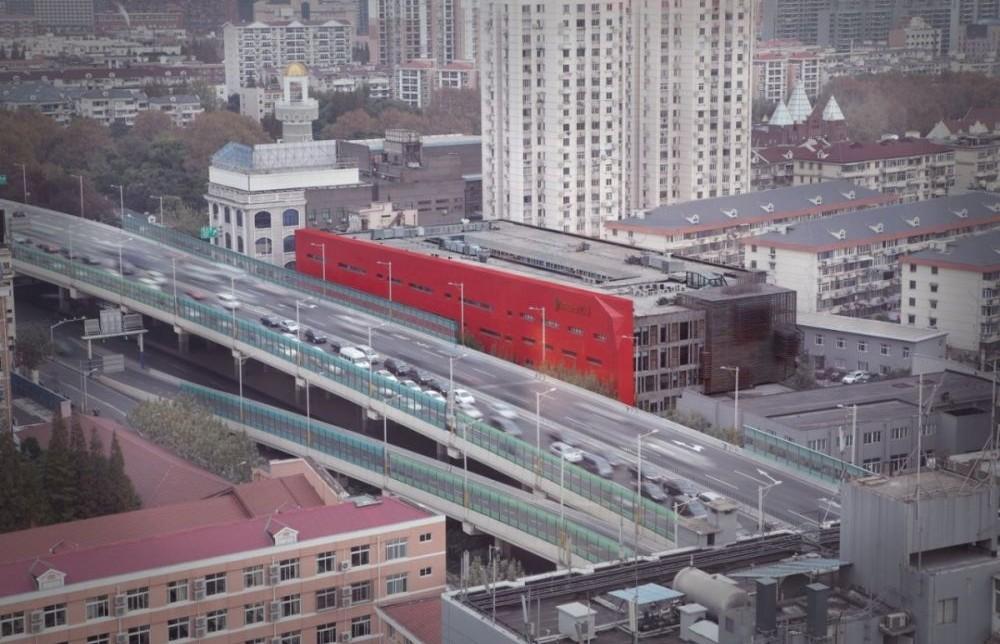 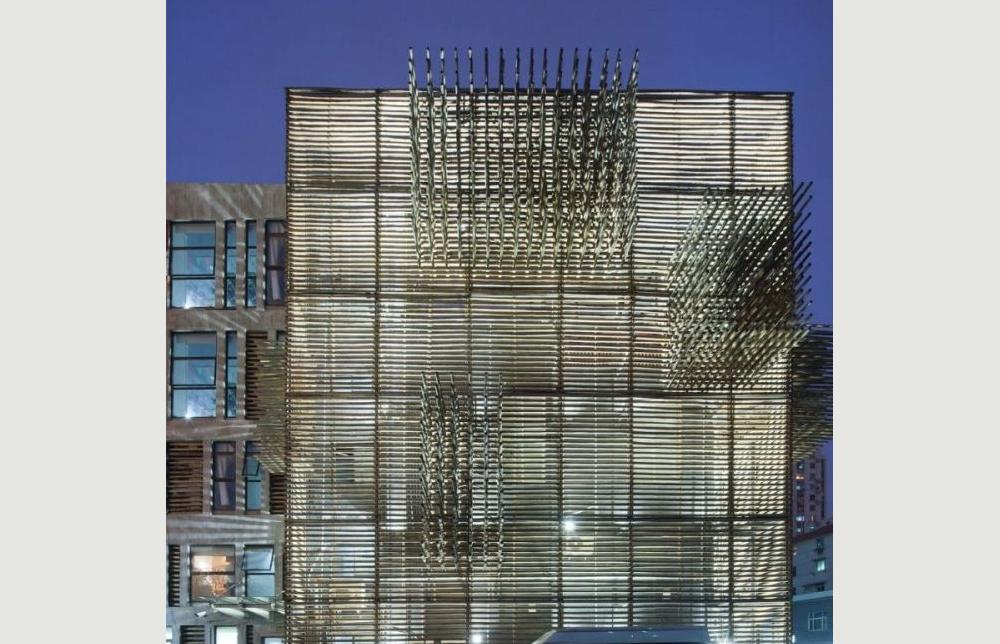 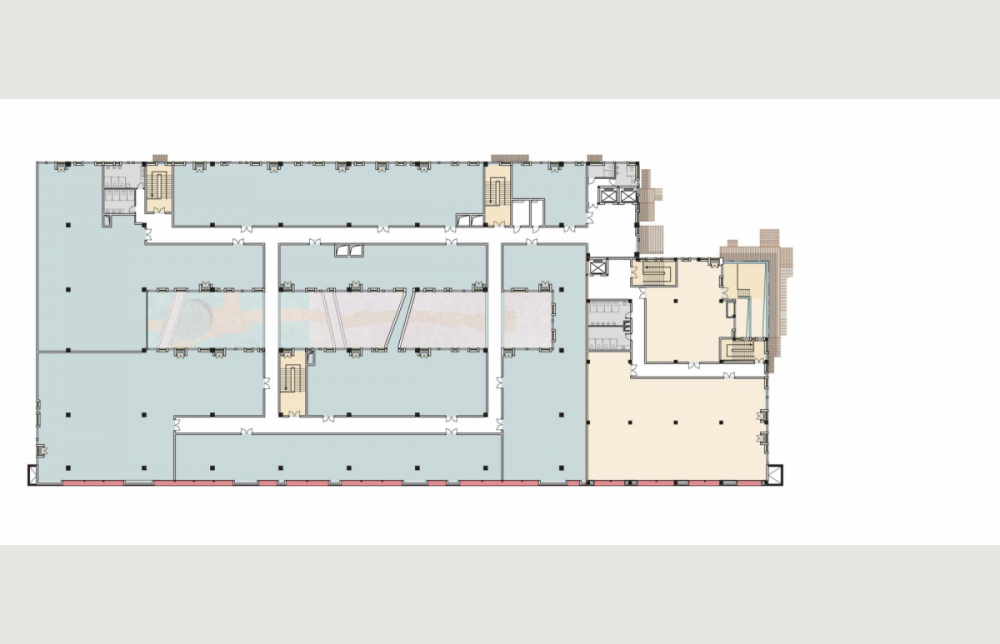 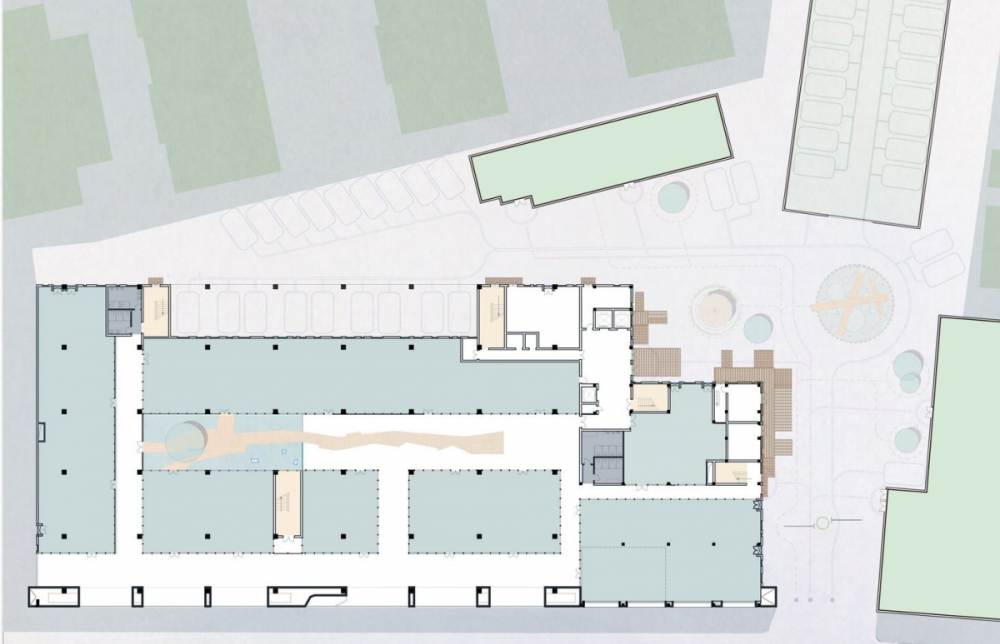 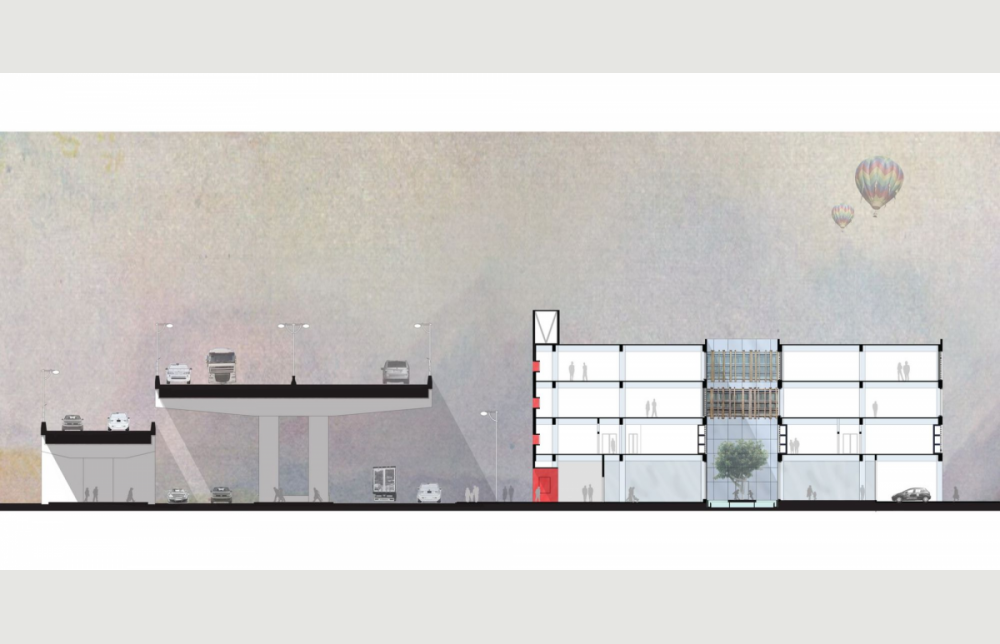 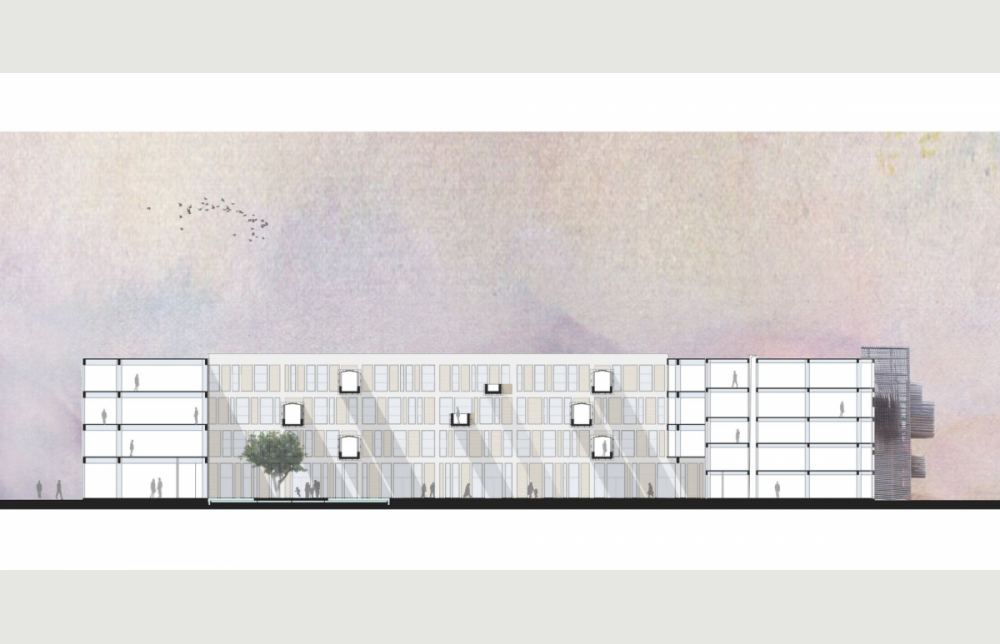 If you digit +31° 16’ 9.45”, +121°27’ 14.93” on Google Maps, a zenith scale view will appear of a rectangular building, characterized by a central patio with pedestrian bridges crossing it and a long flamboyant red wall which acts as a barrier to separate the internal areas from the noise of the elevated road which runs opposite.
The project designer, Francesco Gatti recounts:
“When we designed the building, we made the red façade turn towards the roof, as we were amused by the idea that the main web-mapping sites would possibly recognize it”
It is a choice of visibility that transcends the dimensions of the neighborhood and which might seem megalomaniac at first sight – a signature visible from Space -. In reality this red wall, eye-catching and with its exaggerated dimensions, is representative of the whole idea of the building, the tip of the iceberg of a complex and difficult project that tell us much about the actual state of architecture in China.
Gatti has been living and working in Shanghai since 2003. The architect, who is Roman by origin, has concentrated on heterogeneous projects: from the rebirth of ex industrial sites, to the design of urban areas, from the architecture of interiors to important international competitions. In every project, whether the interior of a clothes shop or a car museum, one can always recognize his concepts and style – pragmatic and visionary at the same time -. While responding to the exigencies of a private client or a company, Gatti has always strived to find an outstanding idea, capable of satisfying the contextual conditions, adding an unexpected solution that, in the chaos and mutation of the Chinese metropolis, can give a unique character to the project.
In the case of the Red Wall this was a particularly difficult aim. The project had to contend with severe limitations: a particularly meagre budget, a site that was oblong and narrow and, above all, the ruthless reasoning of the investor who was intent upon commercially exploiting every single square meter of the new building.
The Italian architect therefore proposed a simple design: a regular volume of four floors, empty in the centre as this was indispensable to provide light for illuminating the upper levels destined to be offices.
The Red Wall has not been designed with complex structures or expensive material, but to maximize the local resources and know-how. The aim was to concentrate the experimentation on the “skin”.
This strategy is used world-wide; and has often produced “boxes” with a mediocre content and a striking outer appearance; one-off solutions where buildings, once the novelty of their external appearance has worn off, have retreated into the anonymity of their standardized interiors.
In the case of Gatti the limitations of the budget and the decision to concentrate on the external face or skin have in effect produced a dual result, which is sculptural and functional at the same time. The aesthetics and the identity of the building have been fine-tuned towards the environmental comfort of the interior.
The main façade is a long composition of panels in red aluminium, triangular in form, intended to be perceived as in movement from the interior of the vehicles that transit the elevated road on the opposite side.
The idea of the texture, produced from the matching of triangular polygons of varying forms and dimensions, was born from a direct intuition, the architectonic transposition of the graphic interface of one of the principal software for 3D modeling.
The principal façade of the Red Wall is completely two-dimensional; however, the pattern of the composition creates a strange optical mesh effect which seems to create a relief movement. In this way Gatti obtains a surprising result, optimizing the resources to hand: to effect this, no more aluminum was used than for an ordinary facework. The “red wall” is thick and has linear and narrow openings in order to limit the acoustic and visual pollution resulting from the presence of traffic.
The minor façades, destined to host the technical apparatus, have been hidden behind a second mesh – a pattern of bamboo panels characterized by their varying dimensions and to the extent they jut out. The “skin” of the façade gives a sculptural effect and its width provides the shade necessary to prevent over-heating.
The concept of the “Red Wall”, a multi-functional structure of 14300 square meters, was born in 2008 and the construction was carried out during the course of the same year. In the space of a few days Gatti and his collaborators moved from a convincing proposal to drawing up the technical designs necessary for the construction.
The building site started a few days later and had the inhuman rhythm of capitalist China, a model on the scale 1:1 where everyone – contractor, client and architect – decided the details day by day without following the rational organization of a “traditional” construction. Labor cost so little that it was possible to experiment, do and undo, construct and demolish entire parts, like an architectural model.