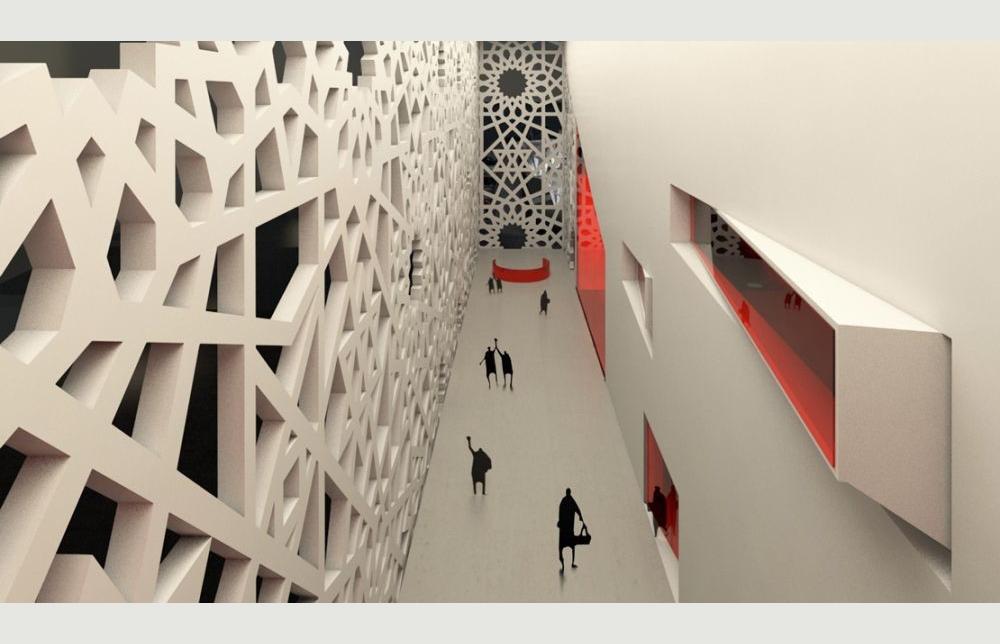 This project is created within the framework of the International Architectural Competition “Change the Face” for Reconstruction of Cinema “Pushkinsky” in Moscow.

The goal of the contest:

Transformation of cinema image and its reorganization in accordance with new demands of society and within the new architectural and urban environment of Pushkin Square.

Cinema “Russia” (“Pushkinskiy”) is a typical construction of the 1960s of the Soviet period. Over the past 20 years of post-Soviet period, in the current transition economic situation of the country, “Pushkinskiy” cinema, as many other buildings of Soviet cities, partially changed its function (with the four sides the building is surrounded by all sorts of cafes, restaurants, clubs), which negatively affected its appearance.

Chaotic and cheap advertisements, signs and banners are typical viruses, which is currently propagating and multiplying in the post-Soviet cities on the facades of buildings and architectural monuments, blocking not only facades with rich ornaments and decorations, but also, skylight and balconies which mutilates architectural appearance of the building and distorts perception of the urban environment in general. However, currently the above mentioned advertisements are integral part of our cities and architecture with the commercial content of modern capitalist society, which in our opinion, should be considered at an early design stage.

For this reason, one of the main ideas of the transformation and functional-informational reorganization of the building was the use of a digital LED screen on the main facade.

The main facade is a LED screen, which, with the attached software module, broadcasts announcement of a new film and advertising. For special occasions, on the facade of the building can be broadcasted New Year’s celebrations or the Victory Parade on Red Square. It is possible to broadcast a film or football matches on summer Moscow evenings, and so on.

Dynamic, colorful items shifting each other on the screen will attract passers-by. Decorative and light-and-color design of the main stairs is favorably resonate with the appearance of a nearby park, as if being its natural continuation.

Along the entire perimeter, the building is “dressed” in a lacy cover stylized as fractal structure of snowflakes, which are symbolic for northern cities, particularly for Moscow. Bypass Gallery (cover) provides protected from the snow, blizzards, rain and wind passage for pedestrians. The gallery provides comfortable passage for pedestrians protected from rain, snow, dust and noise of cars. Also, multi-seasonal cafe and a bar locates in the gallery, where one can always drink a cup of coffee or hot chocolate by the sound of live music of street musicians.
Architects: Telemak ANANYAN, Mariam AYVAZYAN
3D modeling and visualization: David ANDREASYAN, Diana MARUTYAN