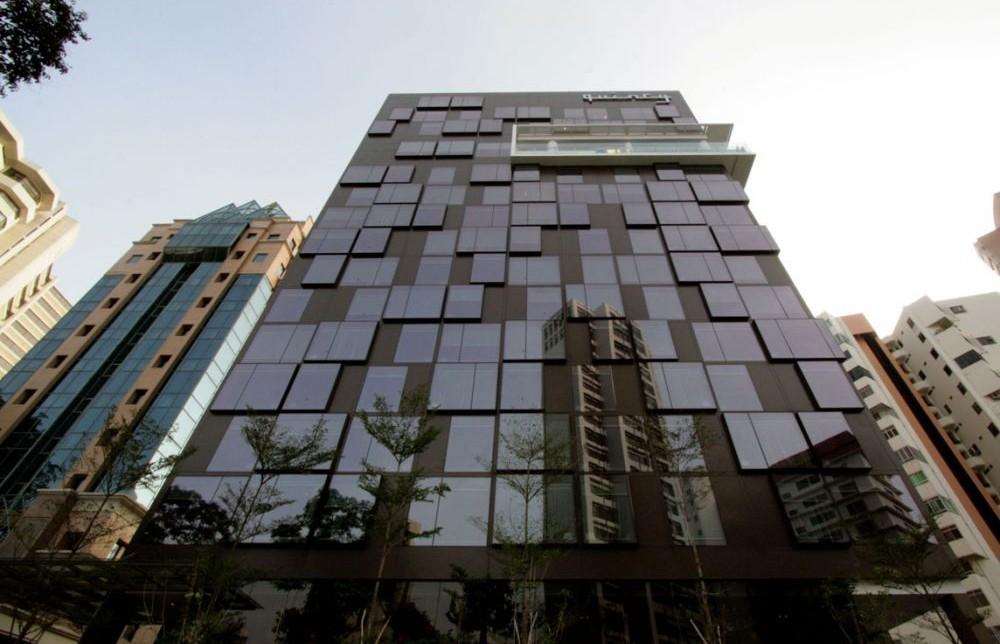 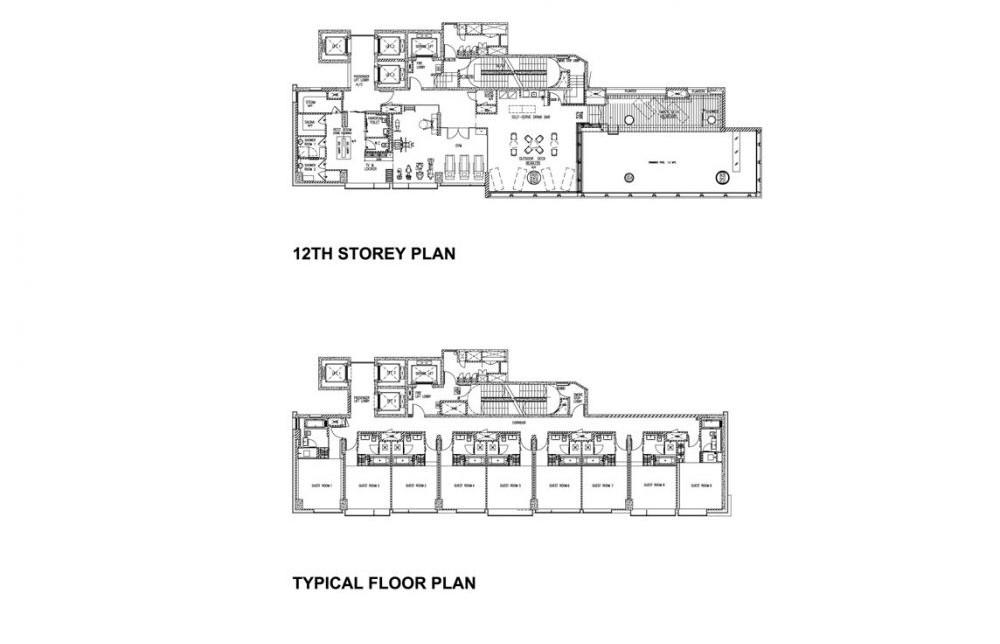 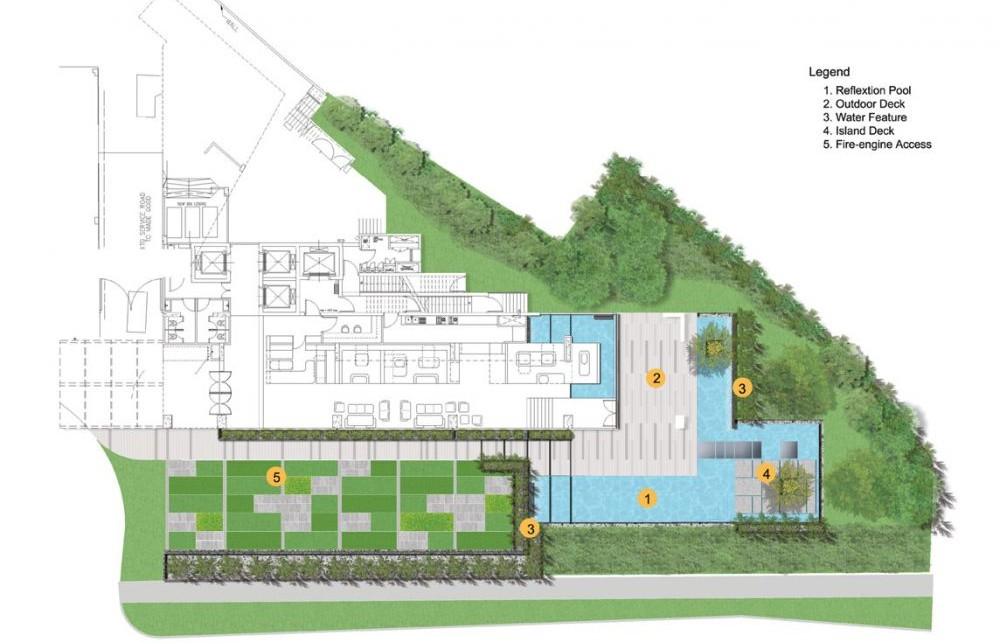 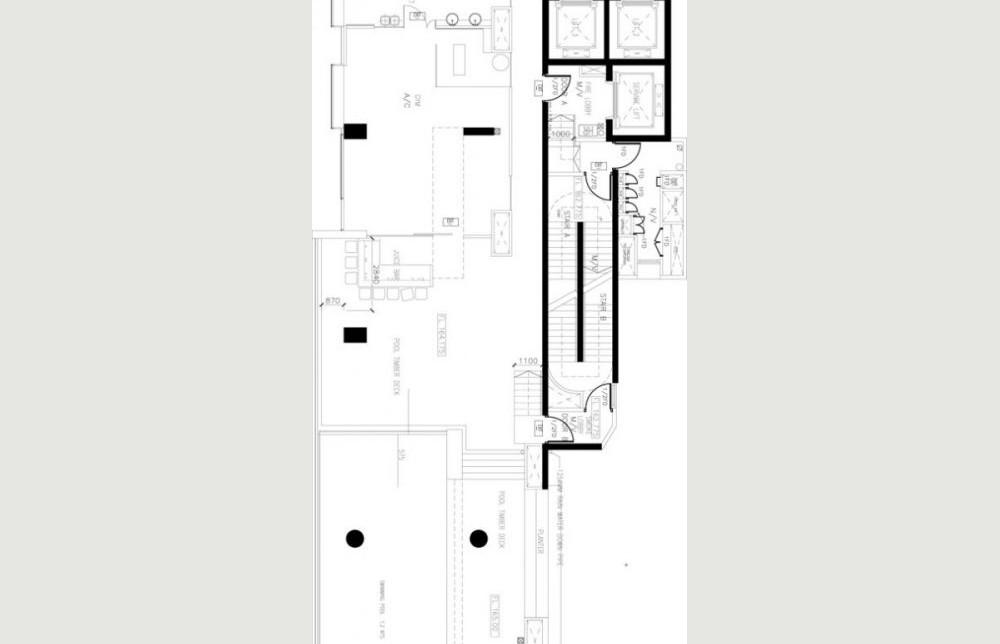 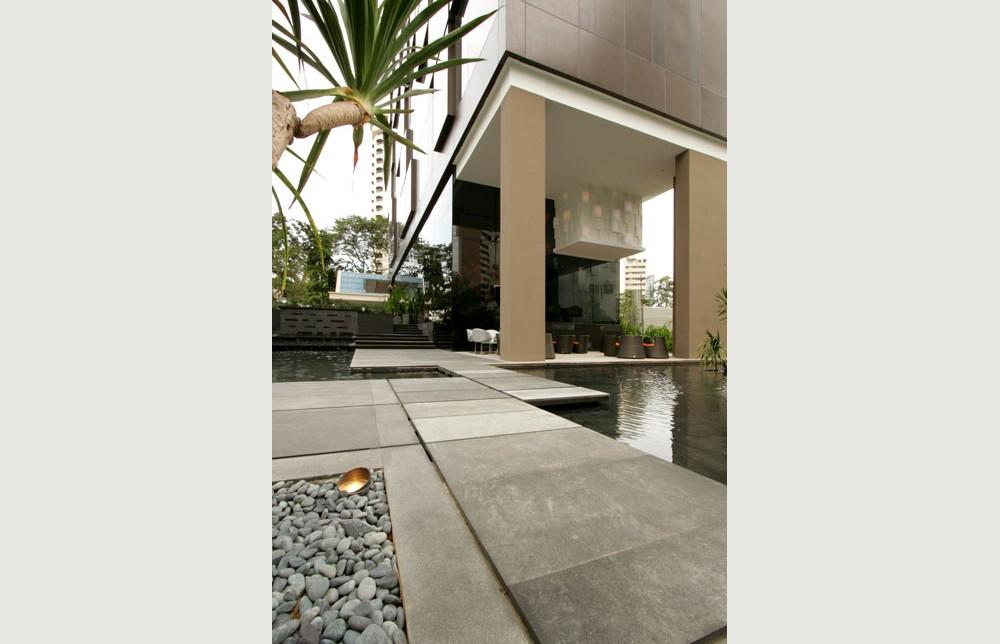 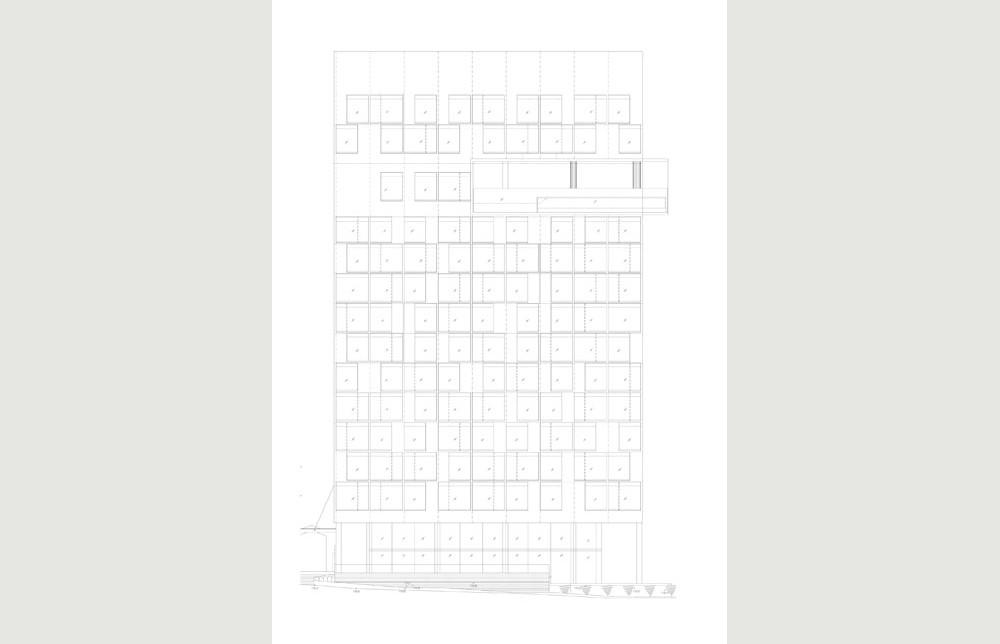 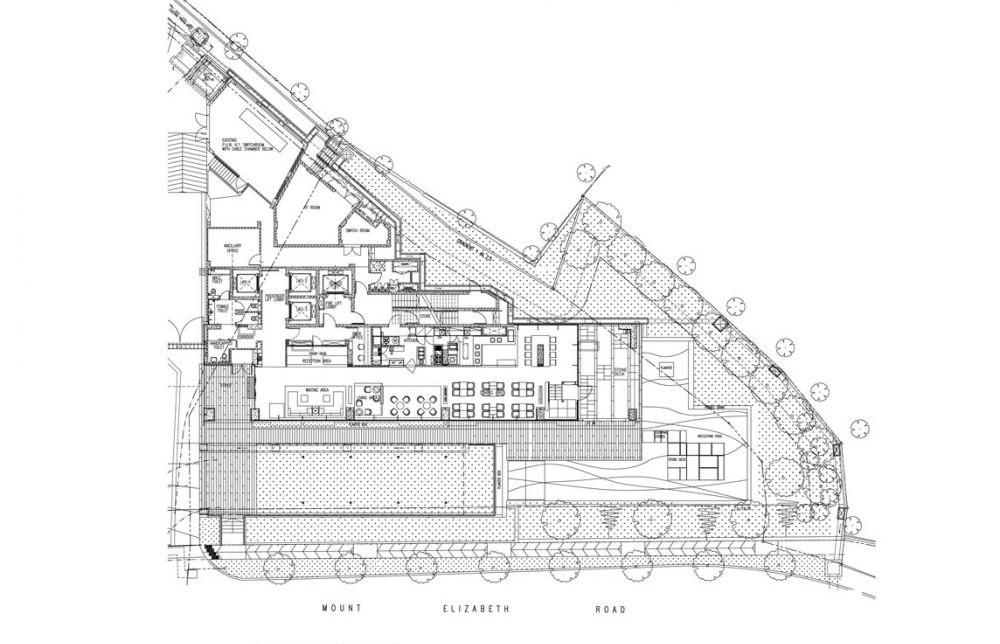 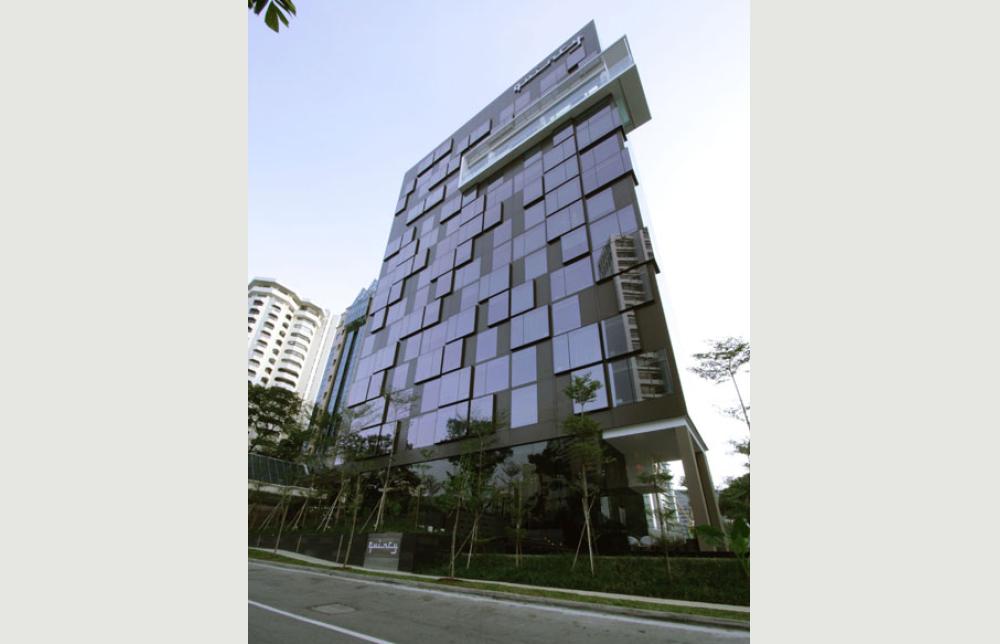 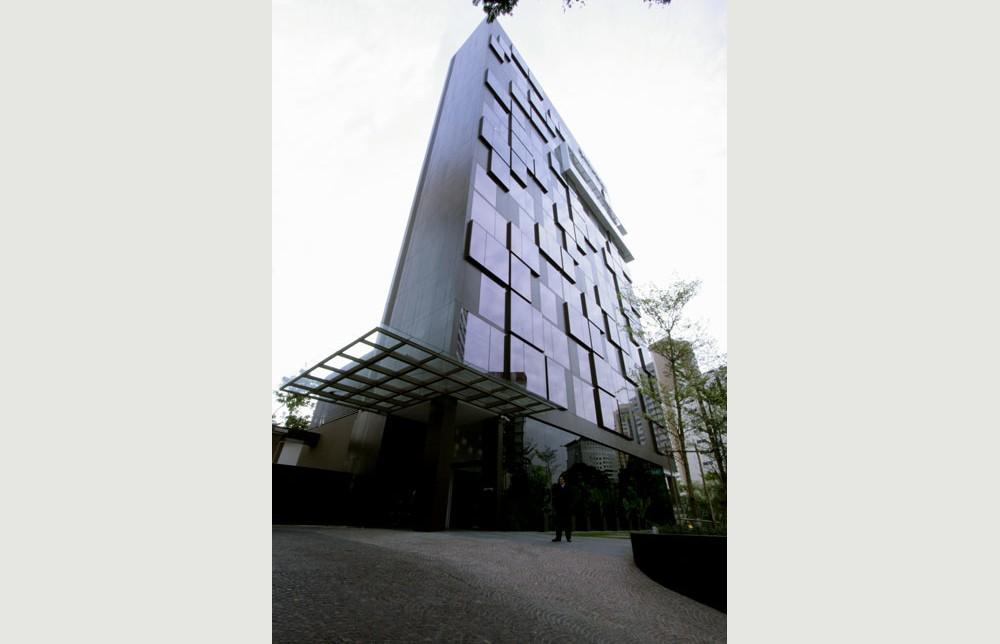 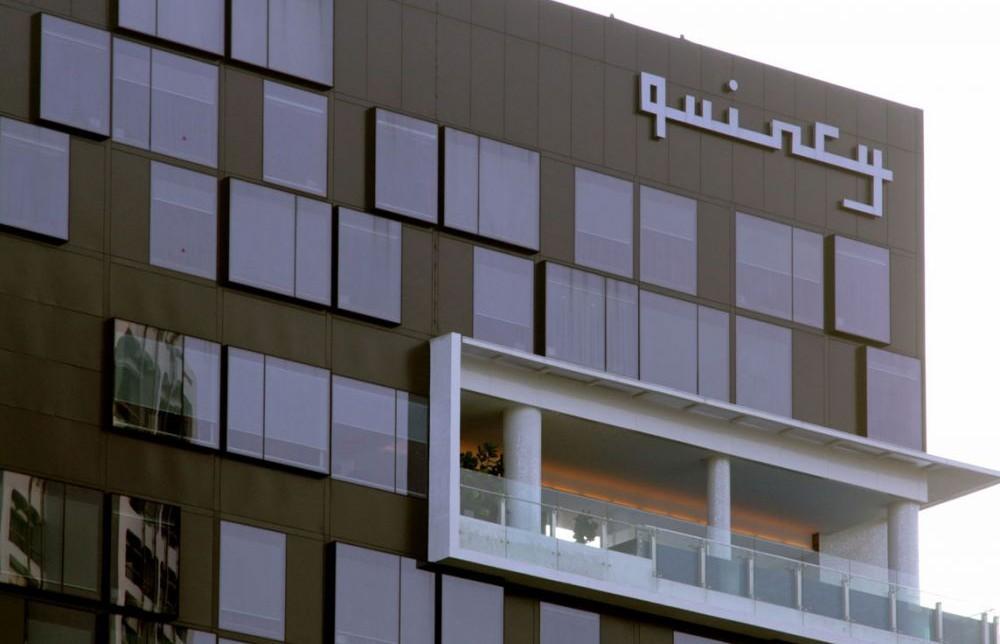 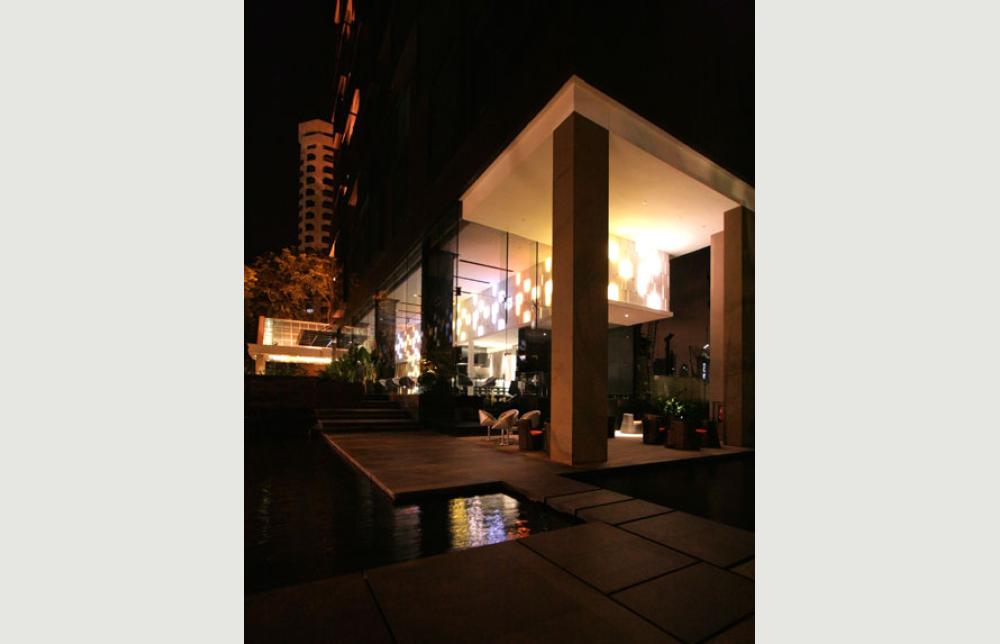 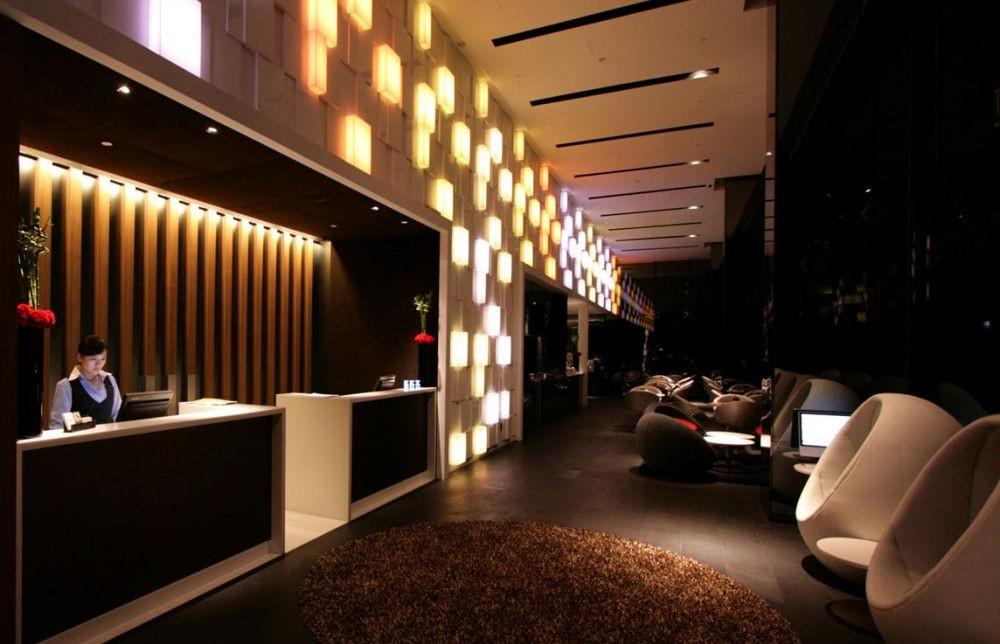 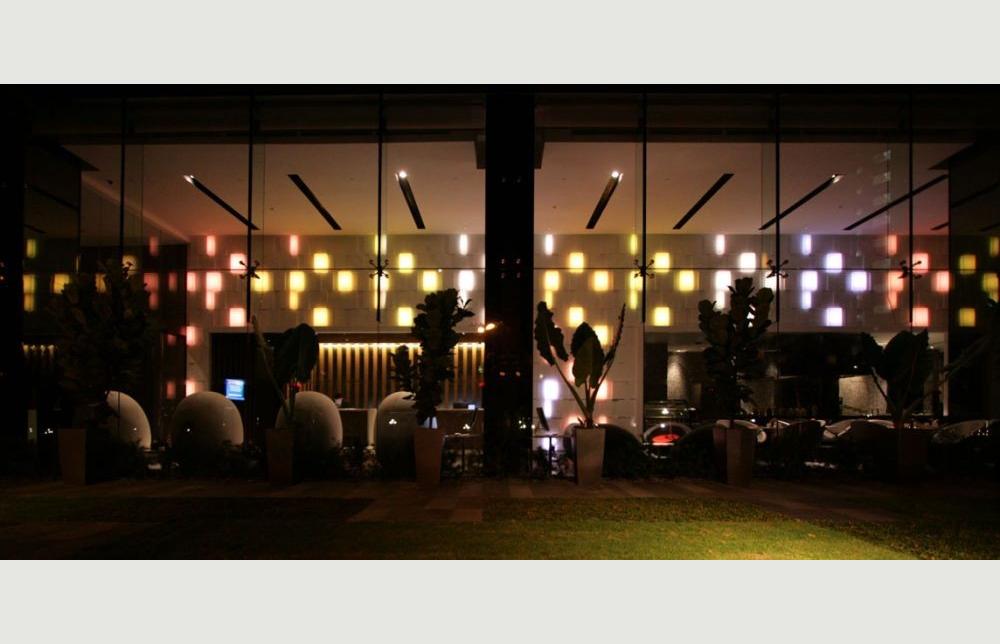 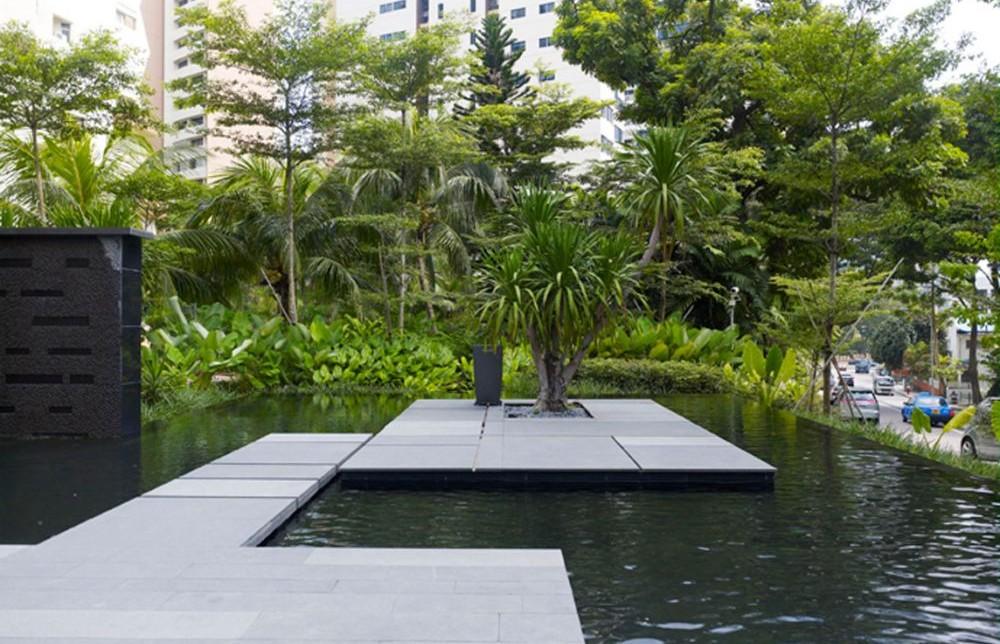 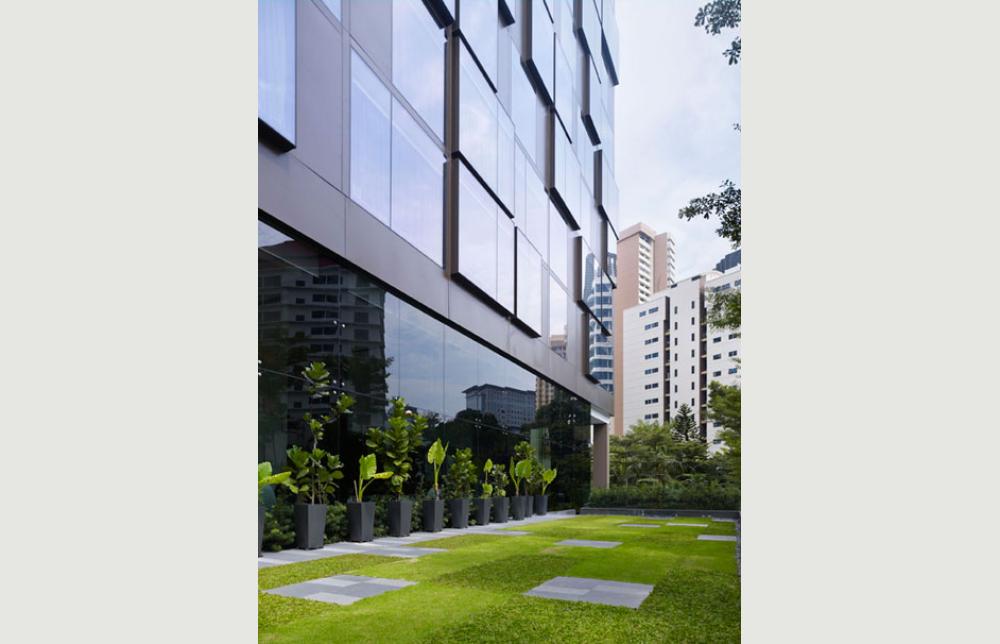 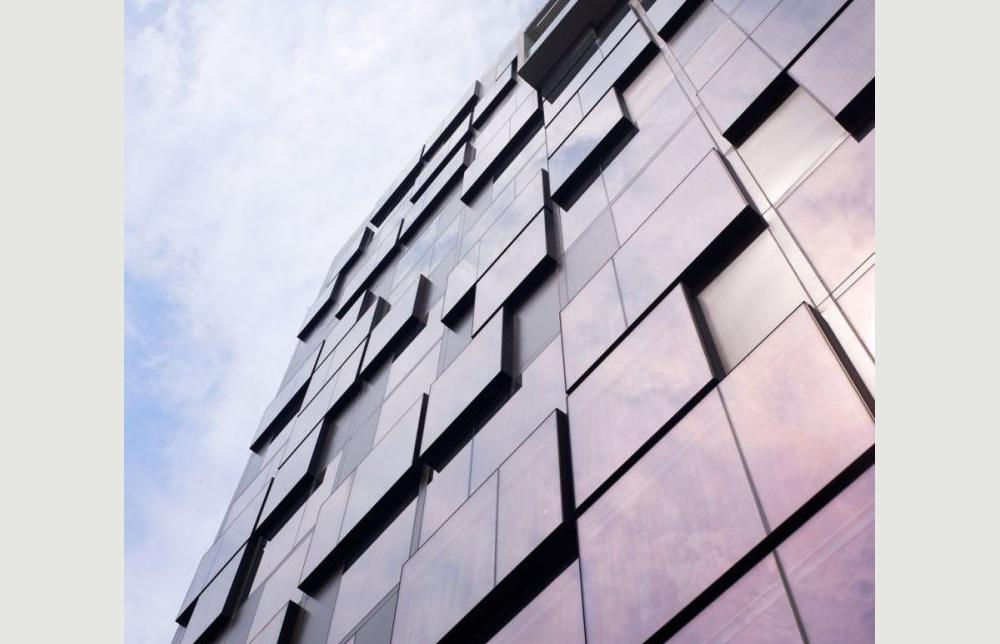 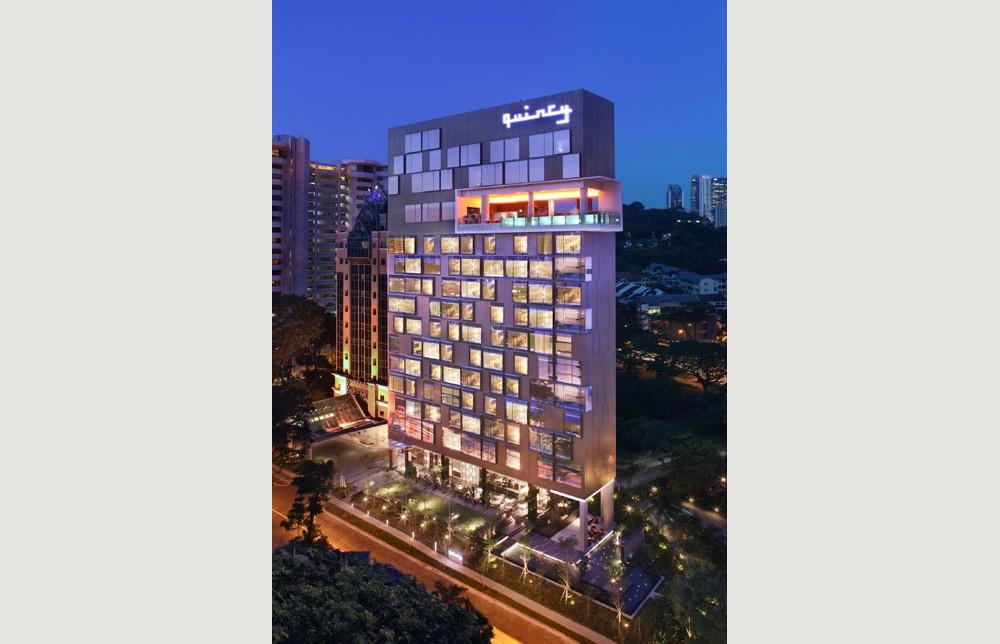 The 108-room Quincy hotel is located at Mount Elizabeth, just a stone146;s throw from the Orchard Road shopping belt
but tucked away in a quiet, residential enclave. Targeted at business travellers, the trendy faccedil;ade of dark grey
anodised steel features shimmering windows that form large, seemingly random, modular shapes that appeal to all
who appreciate good design.
Quincy was first meant to be an extension of the existing Elizabeth Hotel. However, the architects wanted to create
a building in a contemporary style that could clearly distinguish it as an exciting addition to the Orchard cityscape.
The plot of land itself was a very narrow strip that created a huge challenge for the designers. In response, a
rectangular block was deemed the most efficient design but a play on three-dimensional effects was used to liven
up the otherwise mundane form.
This project was the first in Singapore to holistically demonstrate OngOng146;s 360ordm; design solution. This tenet is best
defined as providing services across the full spectrum of design. For Quincy, OngOng undertook the architectural,
interior, landscape and even the graphic design of the logo and all hotel collaterals.
Being situated in the largely residential enclave of Mount Elizabeth, The Quincy is a stylish yet subtle and
understated addition, blending into the context rather than stealing attention. It could just as easily be mistaken for a
block of luxurious apartments, further enhancing the hotel146;s goal of becoming a home away from home.
ARCHITECTURE
The design direction was to create a new and exciting, hitherto unseen in Singapore, hotel for the budget conscious,
design-savvy individual. In answer to this, the hotel faccedil;ade was created using a matrix of one-third or two-third
proportions that was applied to the entire design spectrum.
The faccedil;ade was divided into a grid, and each four-metre long window panel representing a room was subdivided
into three sections. Hence, the windows could either span across the three parts entirely, or have two-thirds act as a
window with the remaining one-third as a bay-window seat. Further permutations include the three-part window as
a bay-window slightly cantilevered, or a two-third bay window with one-third wall space, or even half height
windows across the three panels.
From the exterior, the faccedil;ade appears to be made up of stacked cubes, each cube representing a room, and this
makes for a rhythmic yet seemingly random and natural design.
INTERIOR DESIGN
The interior design was largely inspired by the fashion trend of ostensible simplicity with unexpectedly serendipitous
detailing.
For example, the table in each room is made from white corian. However, its inner sides are clad in brown suede,
mirroring the faccedil;ades colour. The check-in booth is similarly framed in white corian with its underside lined in
Note: This form must be completed in its entirety, signed, dated and returned as a Word
or editable PDF document. Questions Concerns Email: projectsArchitypeMedia.com
suede. Meanwhile, horizontal strips applied in the similar one-third/two-third design matrix, gave each rooms bed
headboard a degree of tactility and strong visual impact.
LANDSCAPE
The main objective of the proposed landscape was to provide pleasant outdoor spaces for hotel guests to rest and
enjoy the ambience of lush, tropical gardens.
The design philosophy is one that is sensitive to contemporary building design and maintains a modern and
reflective quality to the surrounding space appropriate to a boutique hotel. The landscape encompasses a fore
court, middle court and inner court 150; all connected by a common thoroughfare that echoes the rhythm of the
building faccedil;ade.
From the fore court, the pathway seamlessly tiers into the inner court, embracing a stone wall and an island deck
enclosed by a raised reflective pool punctuated with trees. The two-third/one-third matrix is carried through in the
garden fronting the entrance, with variations in grass types resulting in a mosaic garden.
To separate the main garden from the porte-cochere, a feature wall was constructed. Water trickles down the walls
vertical surface, creating a strong visual interest. The garden is filled with tropical plants, such as bamboo, to create
an ambiance of tranquility amidst the city bustle.
The garden is illuminated at night with a sophisticated lighting scheme that includes fluorescent coloured strip
lighting recessed into the timber deck that stretches out into the garden pool. Underwater lighting also accentuates
the water feature while ample ground lighting highlights the trees.
The landscaping on the 12th floor consists of a timber deck with a contemporary water feature and an L-shaped
pool deck wrapped around it. The pool has an infinity edge and a 145;floating146; Frangipani tree among other trees
recessed into the timber deck.
GRAPHIC DESIGN
The graphic design and logo for Quincy were customised to incorporate the design elements propagated within the
buildings architecture and interior. The logo is a stylised interpretation of the faccedil;ade and this pattern is repeated on
the walls of the hotel lobby, lifts and guest rooms. This same design pattern is also woven onto pillows, carpets and
other soft furnishings. Even the toiletry carries this overarching design principle such that the packagings clean
lines and attention to detail embodies the whole hotel experience.
SUSTAINABILITY RESPONSE TO CLIMATE
149; Faccedil;ades anodised aluminium cladding wears well in tropical climate, requiring little maintenance: a typical storm
will leave the building spick and span without the need for additional cleaning
149; Swimming pool deck is filled with plants for a tropical garden-in-the-sky
149; Maximum landscaping within a small land area
149; Water used for water features is irrigated
149; LED lights for the lobby centrepiece use substantially less energy than conventional bulbs yet do not compromise
aesthetics
149; Bathrooms are fitted with shallow basins to discourage guests from leaving the water running since water will
overflow easily
149; Dual-flush cistern W.C.s in bathrooms provide an energy-efficient option for users
149; Wash basin taps are fitted with motion sensors to avoid wastage