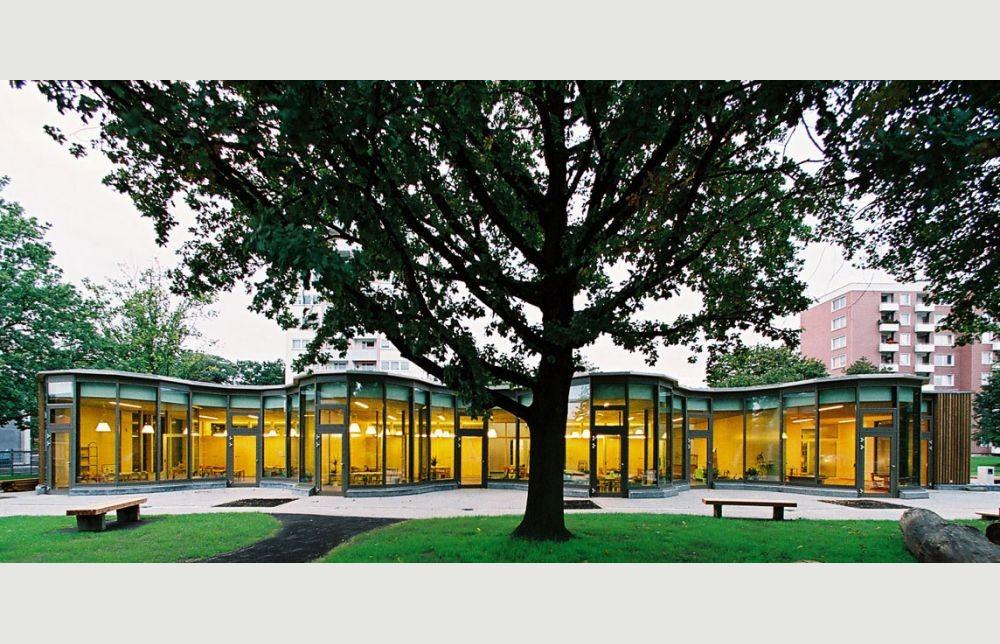 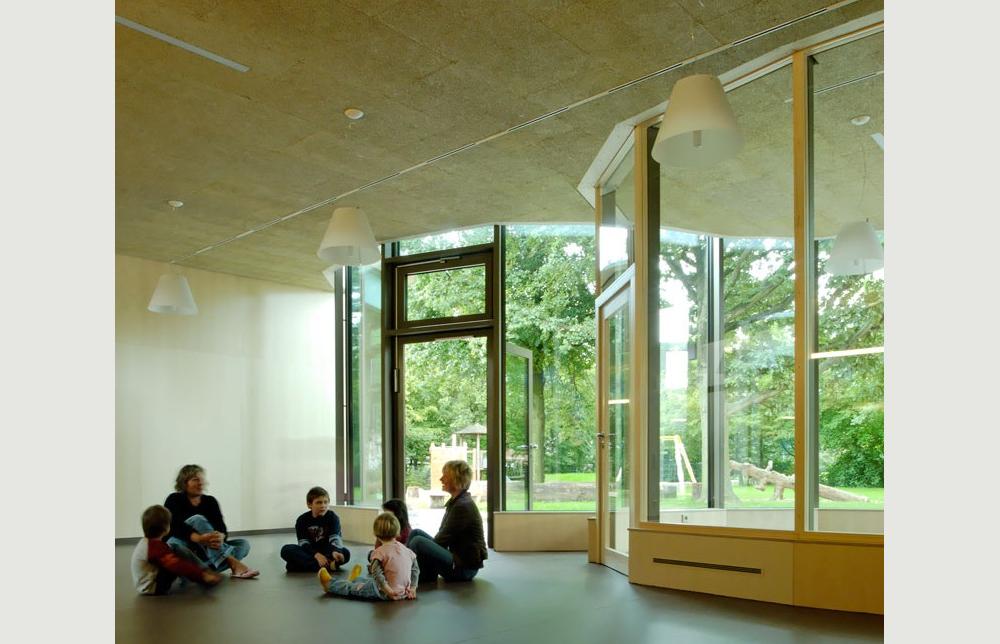 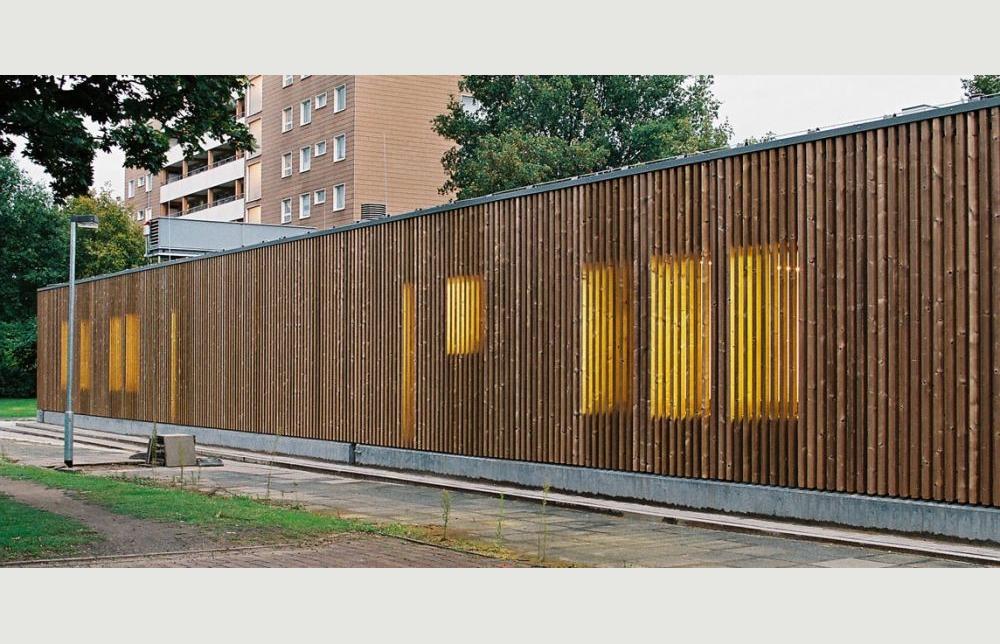 For the conceivable first postfossil generation of growing up terrestrials the city of Hannover meets the challenge of the pilot schematical duty of an adequate didactical abode. In collaboration with the sun the event of the childrens activity is the basic thermal conditioner. The energetically optimized enclosure investigates in the balance of both eco- and archi-friendliness and the sensual unison of space, form and nature.
The site is an iconic 1950s suburban setting, with a great balance of density and green outdoor spaces. The project is to replace a previous fossil kindergarten structure from the early 1970s, which was placed in a way that it “clogged” a recreational park corridor, which was initiated the original mid century masterplan. Almost half a century later, the goal was to bring it back to the original natural scheme and let the building both from a site-strategically and architectural point of view become embedded in nature again. Respecting and taking advantage of the natural shading device potential of the mature trees on the site, the building occupies almost the same foot print of the previous structure.
The human event and activity of the children structures the building in a clear way. All the service spaces align along the north end and are connected by the linear circulation space, which is wide enough to serve as well as a play-street and leads to the living-rooms to the south. This internal hierarchy responds to the thermal logic in the transition of the enclosure from all closed to the north to maximized open of the sunny south.
Regarding the landscape revitalization goal, the northern front is not treated like a facade, but with the sequence of vertical wooden slats, which are thinned out over the openings, to blend into the natural tectonic pattern of the green space. The light shining through the louvered parts during the darker seasons gives it a mystical notion and enhanced the childrens curiosity. Going along with that, the calculated perception of the facade more as a landscape than an architectural element and the fact that landscape elements get less attacked serves as an anti vandalism prevention and to keeps the maintenance costs low. In the inner play-concourse the spatial transition character is enhanced my rhythmical sky lights, which serve as a natural way-finding device to the living rooms. Juxtaposing the all glass southern enclosure embraces the sun and the light as the major thermal performance tools.
The curvilinearity maximized the solar exposure and solar heat gain during the move of the sun in a cycle of a day. Spatially the concave areas of the pounding of the glass-waves provide an intimate feel and a smooth transition from the inside to the outside. From the park the all glass front dematerialized the building mass and in this other way blurs the boundaries between architecture and landscape.

Following the postfossil goal a light wood frame structure was identified as the most efficient and effective. According to the “thermos bottle” enclosure principle prefabricated 40 cm thick wall segments including already installed and glazed windows sit on a slab above foam glass gravel. Whereas the southern multi-curvilinear glass wall with triple glazed floor to ceiling glass maximizes the solar gain, the tree other highly insulated sides are clad with a skin of Thermally Modified Timer, in form of slats on thermally modified plywood boards. The interior is dominated by birch plywood wall cladding and wood wool acoustical ceilings on naturally brown colored linoleum floors.

The first Kindergarten of the client in the City of Hannover to be built in “Passive House” Standard is the neighbor of the 2004 Lower Saxony States Award winning community grocery store by Despang Architekten. Both projects by Despang Architekten have received numerous awards. The kindergarten received a 2007 Miami Biennal Award, and was the only project of its type among the 50 applications to have received a Citation Award in the 2008 Lower Saxony States Award of Architecture. The kindergarten was published in books as: “New Prefab” by Loft Publications Barcelona, by Chinese Dalian University Press and HongKong Rihan, as well as “Ecological Architecture” and “Ice Architecture” by Braun Publishing.The “Phaidon Atlas of 21 s Century World Architecture ranked the project as world class which has in addition received best grades from the users after 3 years in operation with minimal energy and highest architectural performance values.