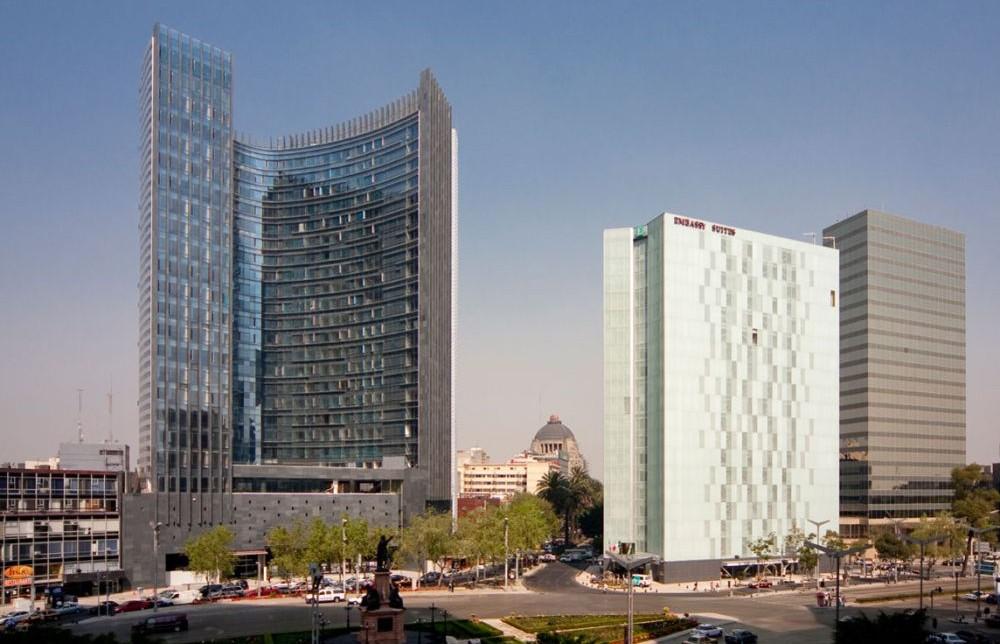 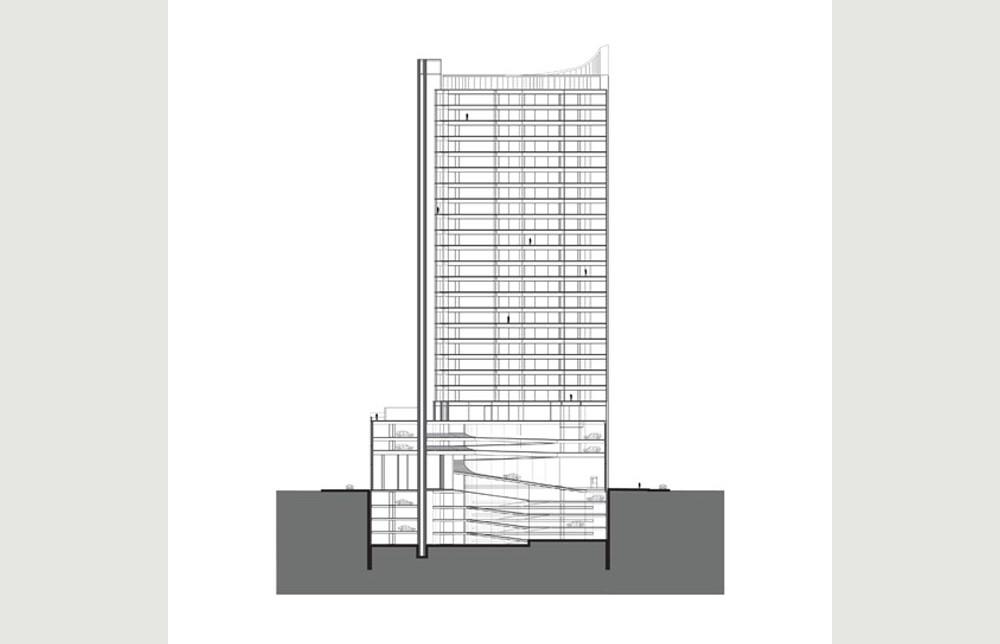 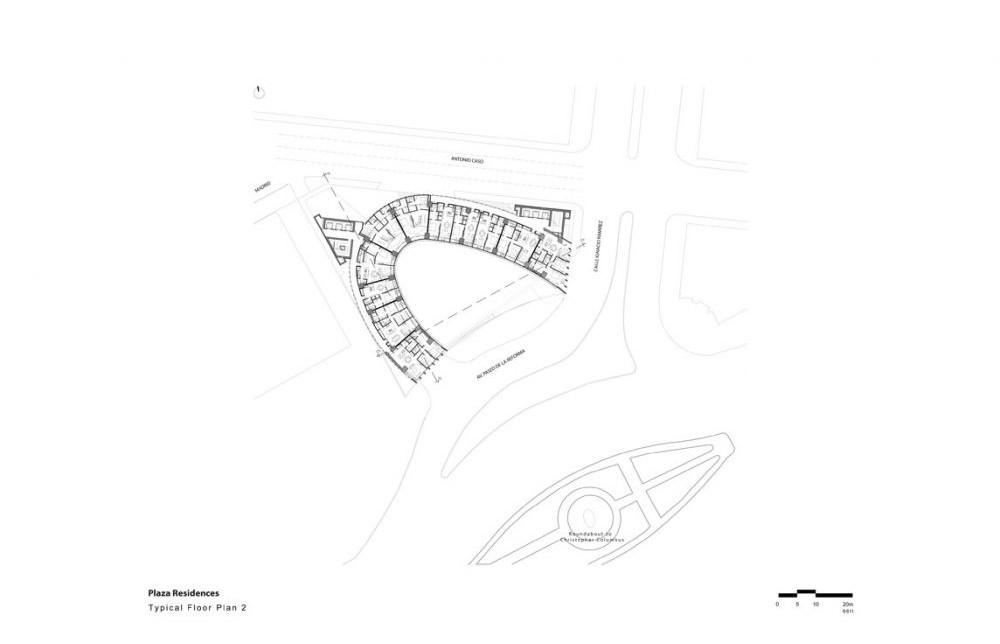 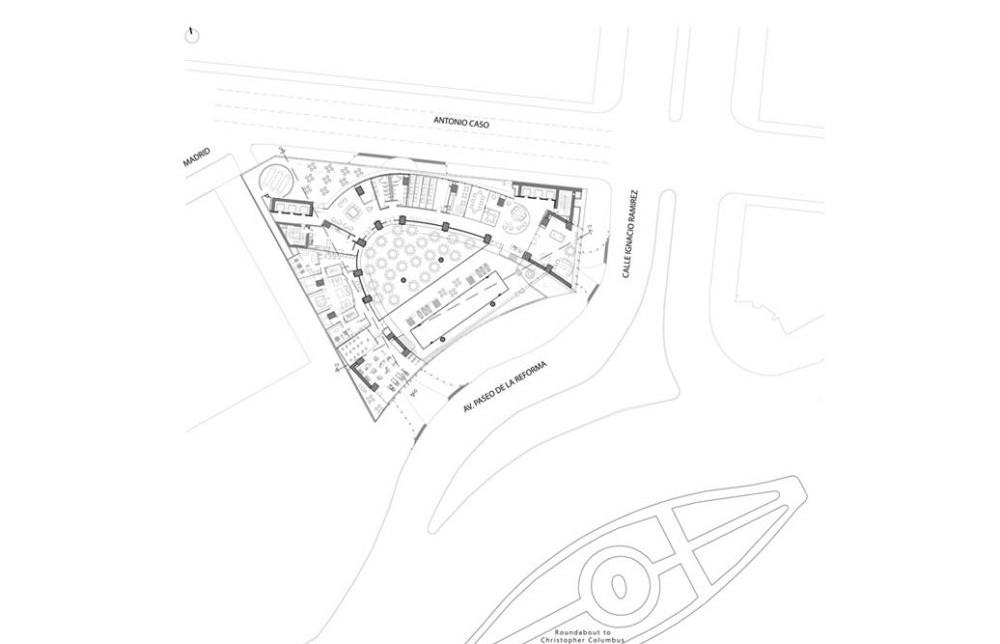 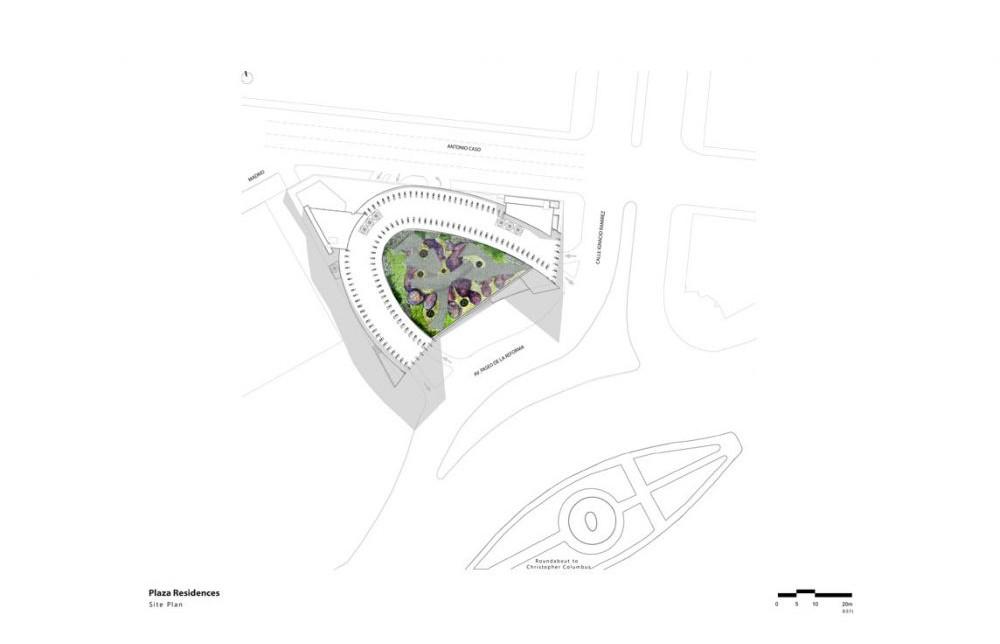 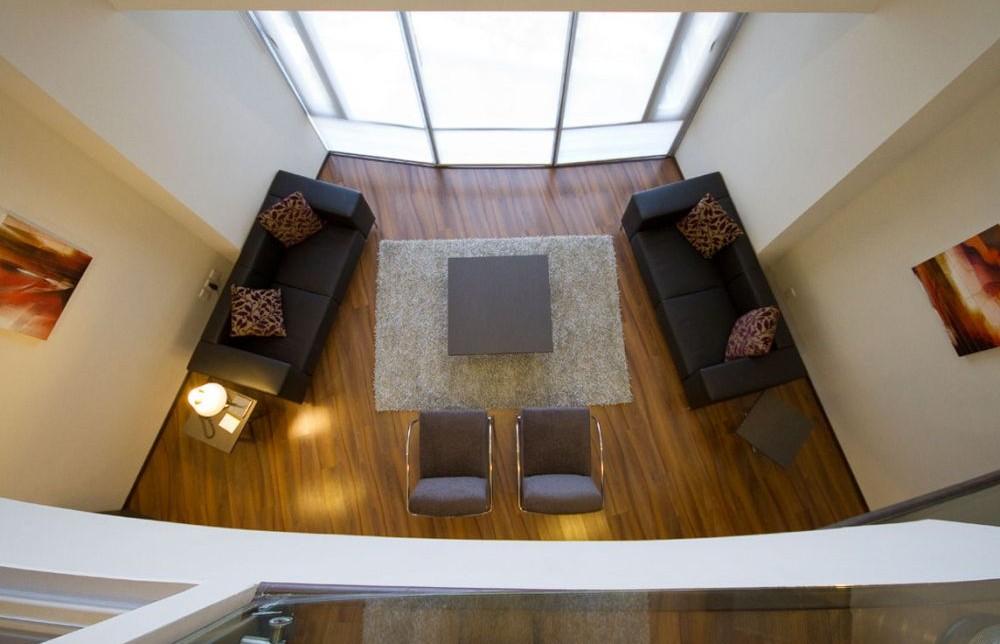 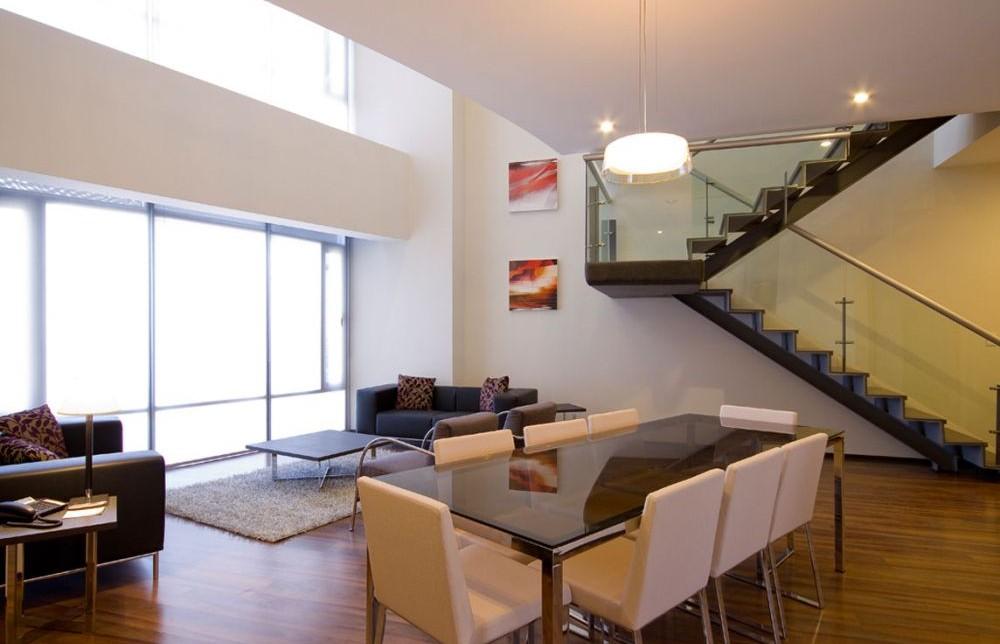 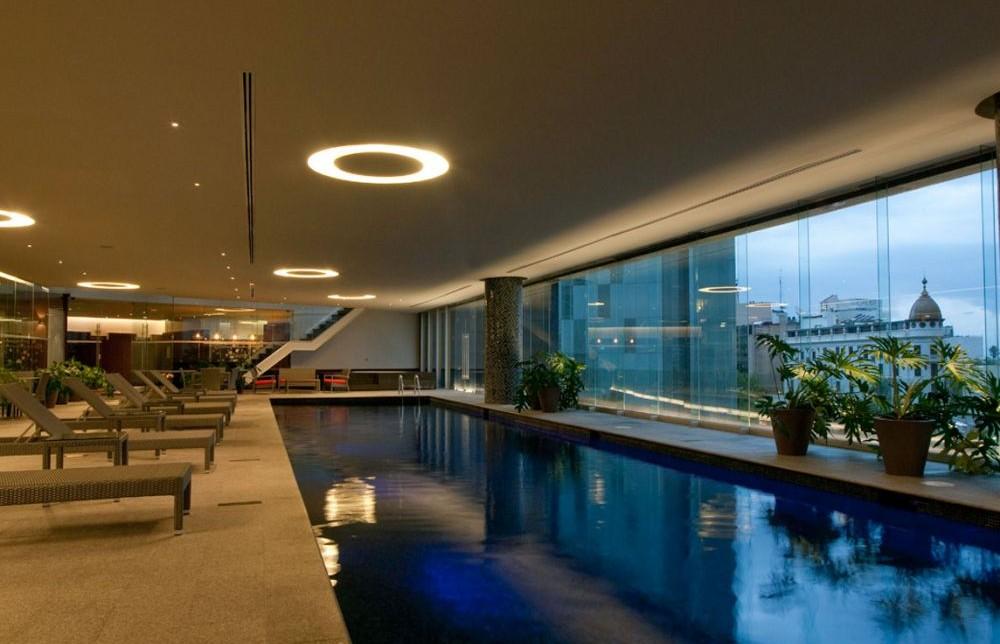 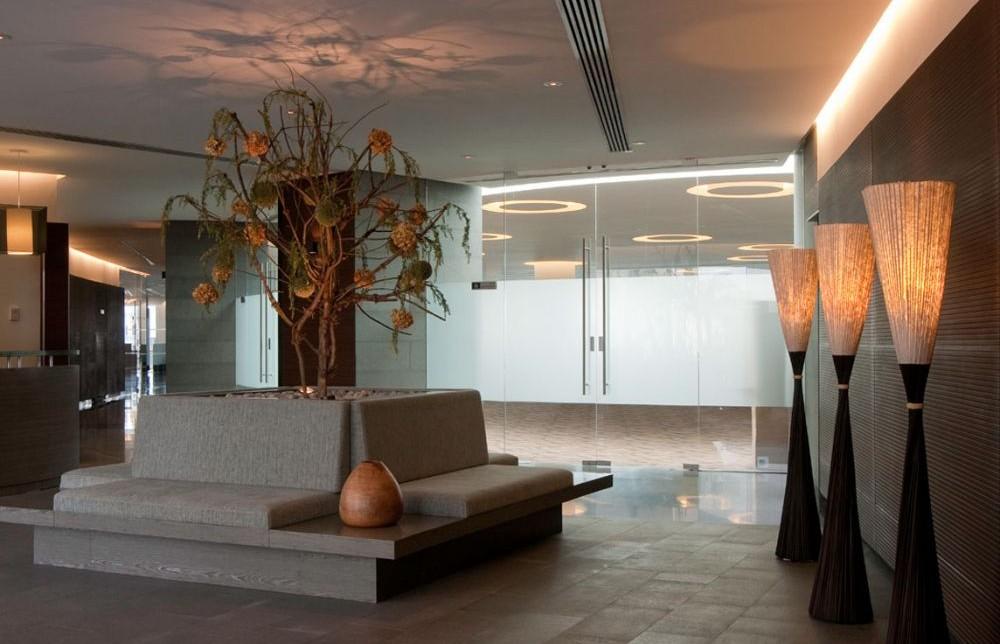 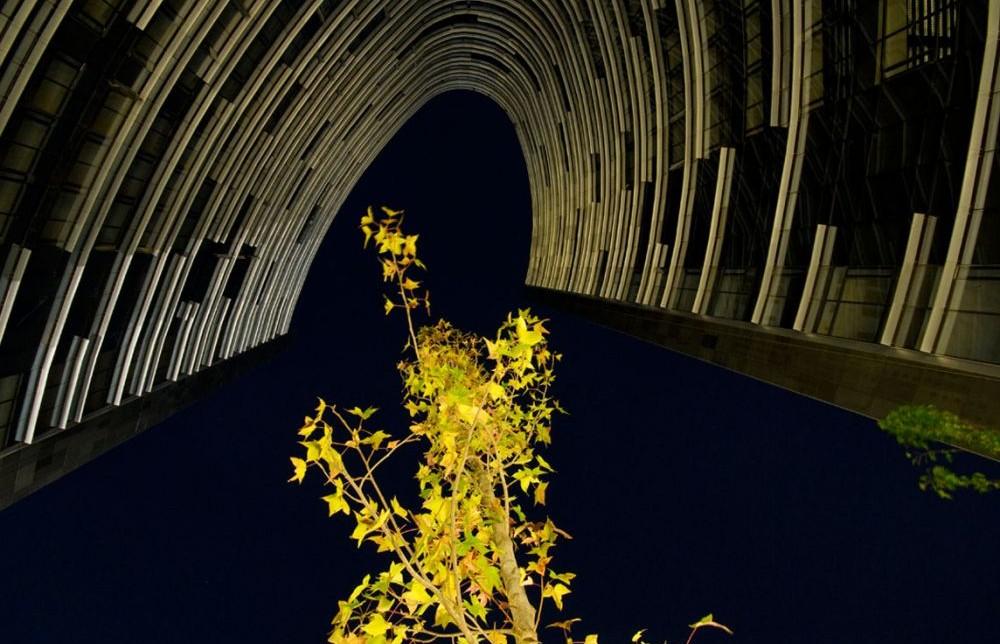 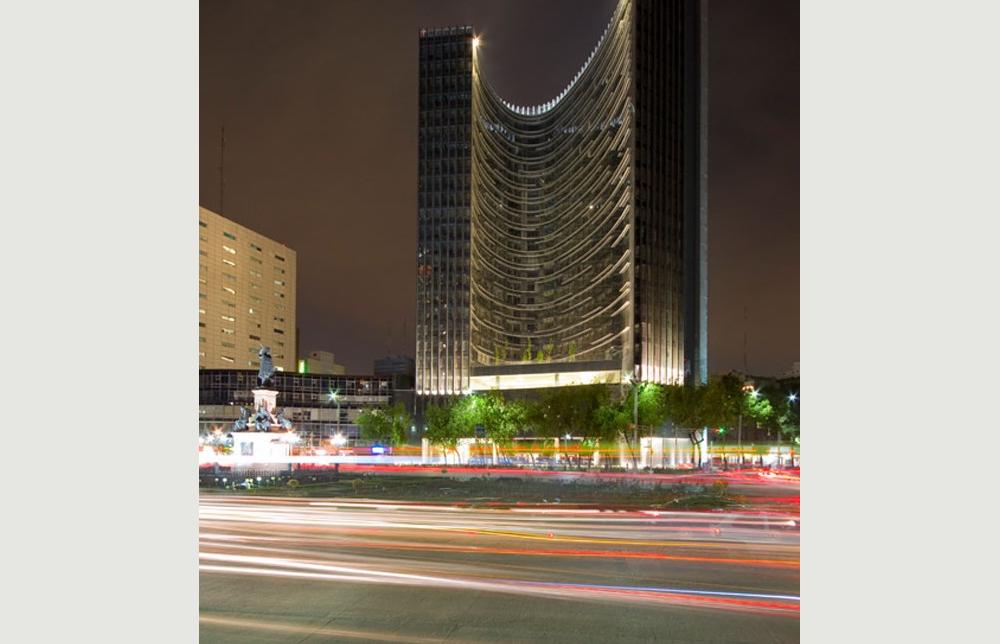 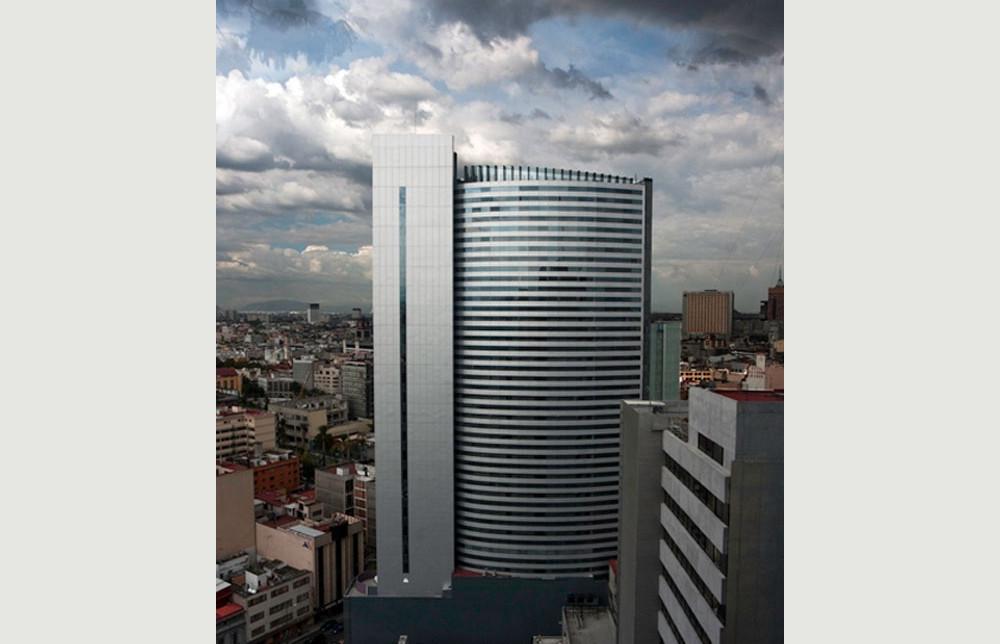 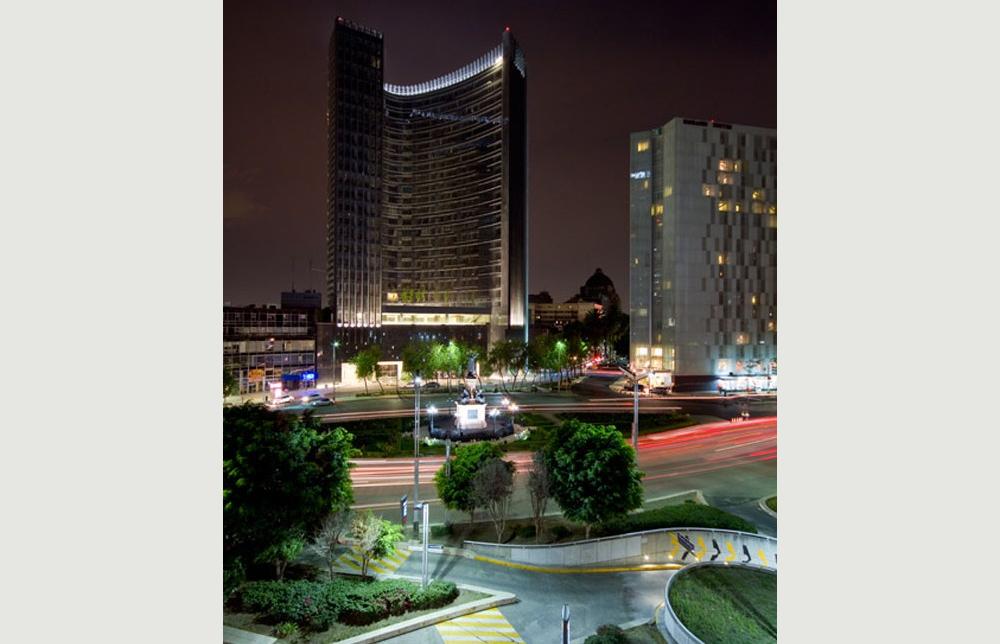 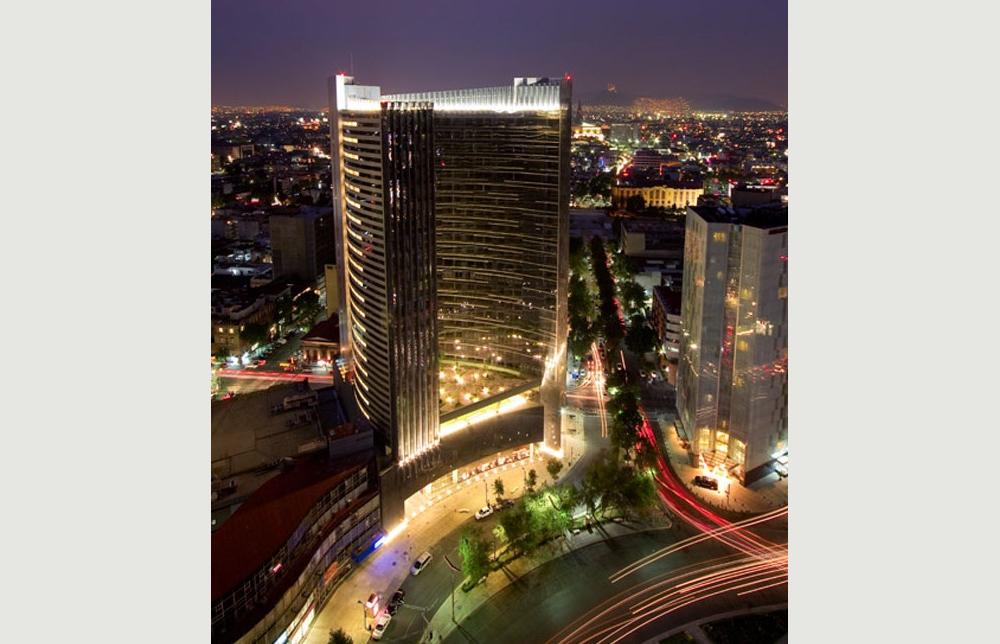 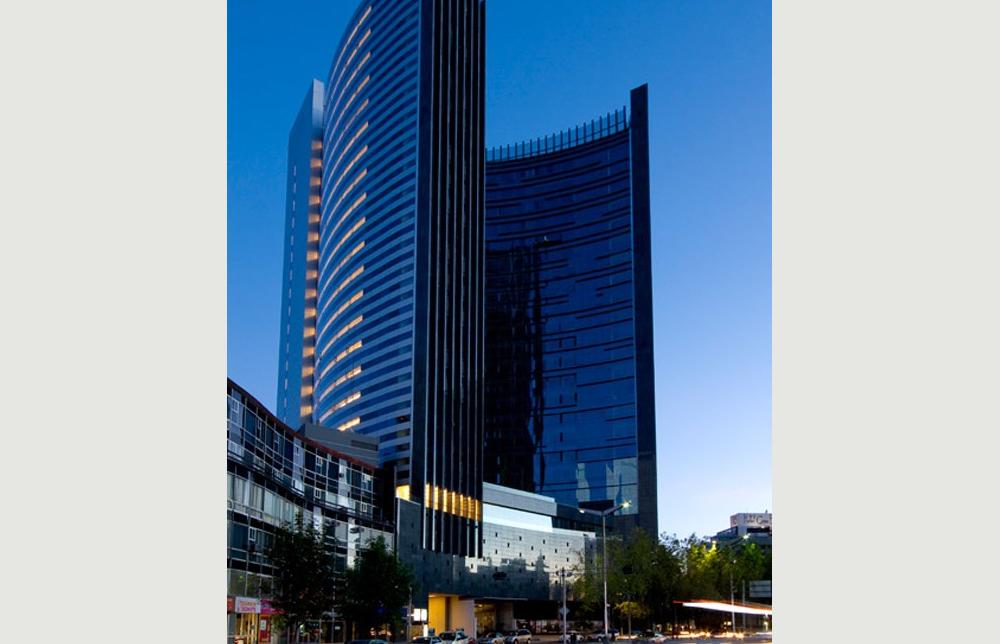 Due to the redesign and recovery of the Historic Center of Mexico City, Paseo de la Reforma, one of the most important avenues of the city, reemerges as the most beautiful commercial, cultural and historic avenue of the metropolis. In recent years, distinct real estate property developments of exceptional importance and magnitude have been developed on this avenue. One of these new developments is the Plaza Residences building; an emblematic building.

In response to the Columbus traffic circle, the building, with its glass interior faade, is erected in the shape of a boomerang, creating a concave interior space that we give to the city by way of Reforma. This concave shape opens up and embraces the majestic traffic circle, integrating it into its concept. The boomerang shape draws out from a long linear element which constringes into the plot with the intention of presenting a considerable unfoldment of faade towards Reforma, making it possible to favor all the apartments with views towards the majestic avenue.

The existing urban belt continues thanks to the basement of the building, which is presented as a continuous element with a collection of perforations. This stone pedestal gives presence to the first floors that accommodate common areas, commercial areas and services.

The building is an abstract entity giving a sense of scalelessness; its principal faade present itself as a smooth-skinned glass curtain, permitting, at a glance, the loss of perception of the buildings floors. The buildings skin is accentuated with randomly placed aluminum mullions, which control the effect of the sun, while creating an interesting effect of light and shadow in the concave shape.

The apartment tower is divided into two zones, both with independent access and lobbies. Each apartment is designed based on the position occupied thereby in the tower according to its orientation. The building has apartments and suites of between 60 and 170 square meters, 4 basement parking lots, common areas for the apartments and a commercial ground floor.

Art is integrated into the Plaza Residences project by means of a raised mural plaza or pisal, which, apart from being a common plaza, also serves as a transition towards the exterior, further favoring visual contact towards the great avenue. The apartments, of single or double height.

Due to its circular shape and horizontal bands of its convex faade, the building becomes an abstract crown in contrast to the Cantera stone of the monument to the Revolution. The passage ways to access the suites that run the entire length of the building become viewpoints providing a unique view of Mexico City.

The corners of the building emphasize its height with an abstract language by means of vertical elements which break the horizontality of the aluminum mullions. One of the vertical elements shifts position to move and converts itself with a group of columns and glass in a box of light, giving presence to the building.

We used a complex and specialized engineering as the pressure retaining system and as a resistant system against Mexico City earthquakes. We used metal box piles at 54 meters, such as an hybrid system of box pile and milan walls to give support to the basement.

Above the basement is a 20-floor apartment tower. The structure is of reinforced structural steel concrete columns. The reinforced concrete was subsequently poured in order to form the main structure.

Plaza Residences is a Susteinable Building which has a faade with alluminum mullions which control the effect of the sun. Also has water tank, a reserve for firefighting, hydrants, pressurized fire escapes and controlled accesses with quick-release fire doors. Common Pump Room for drinking water tank and rainwater tank. Ten water tanks in the Roof area. Anaerobic Treatment Plant. A 1,281-Kw electrical substation, emergency plant, energy saving systems with sensor and timer-controlled electric lights in the parking lot basements, the passageways of the apartment tower and common areas. Five gas tanks, a carbon monoxide detection system in the parking lots, an air ventilation and air injection system in the parking lot basements, ventilation in the common area kitchen, ventilation in the swimming pool area, and ventilation in the kitchens, restrooms and utility rooms of the apartments. Evaporative air coolers are installed for servicing the common areas. Six elevators, and freight elevators in Basements E-1 and E-2.