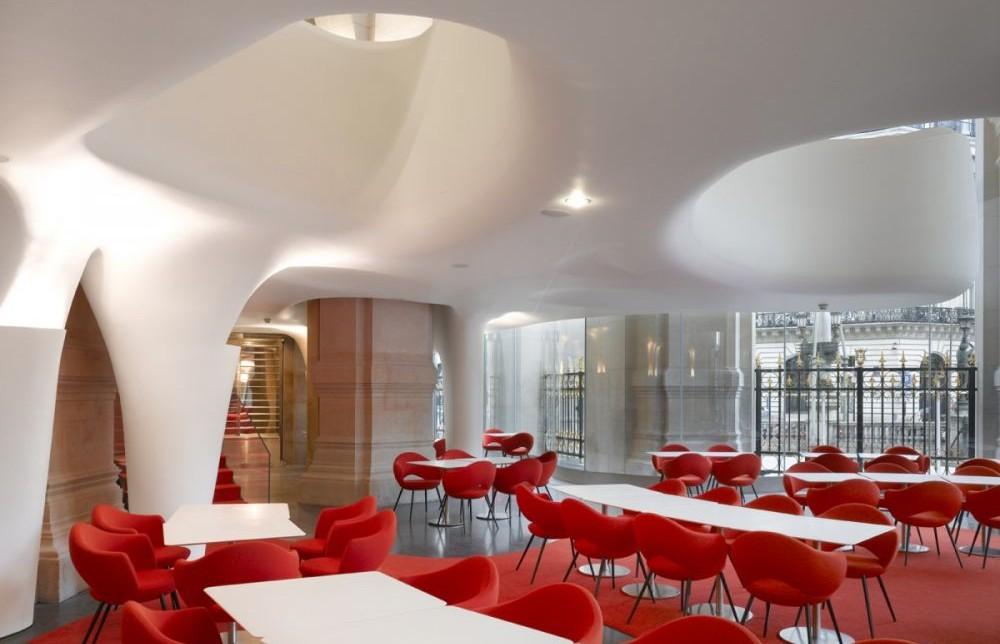 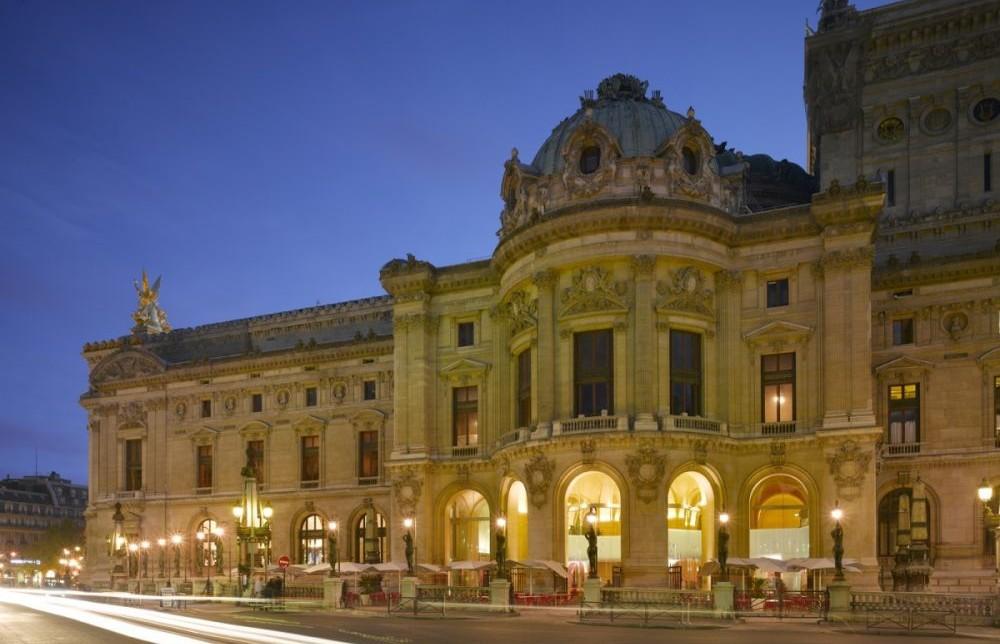 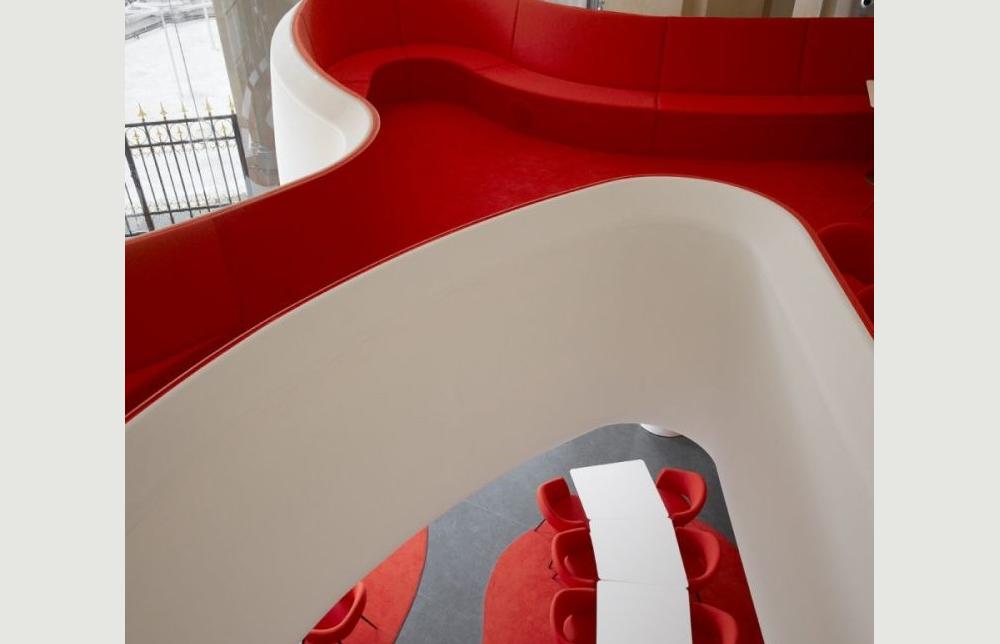 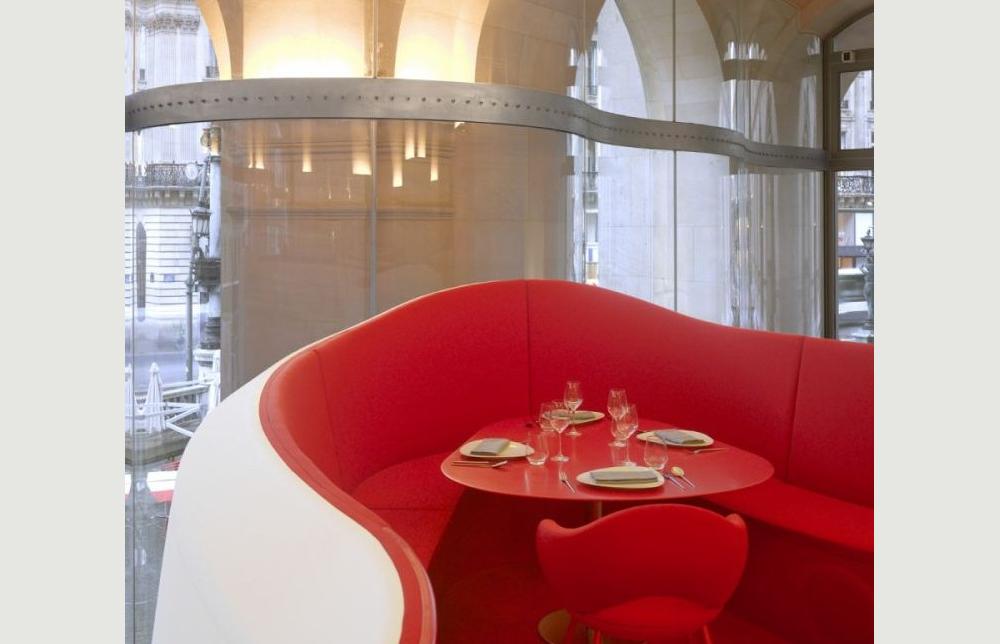 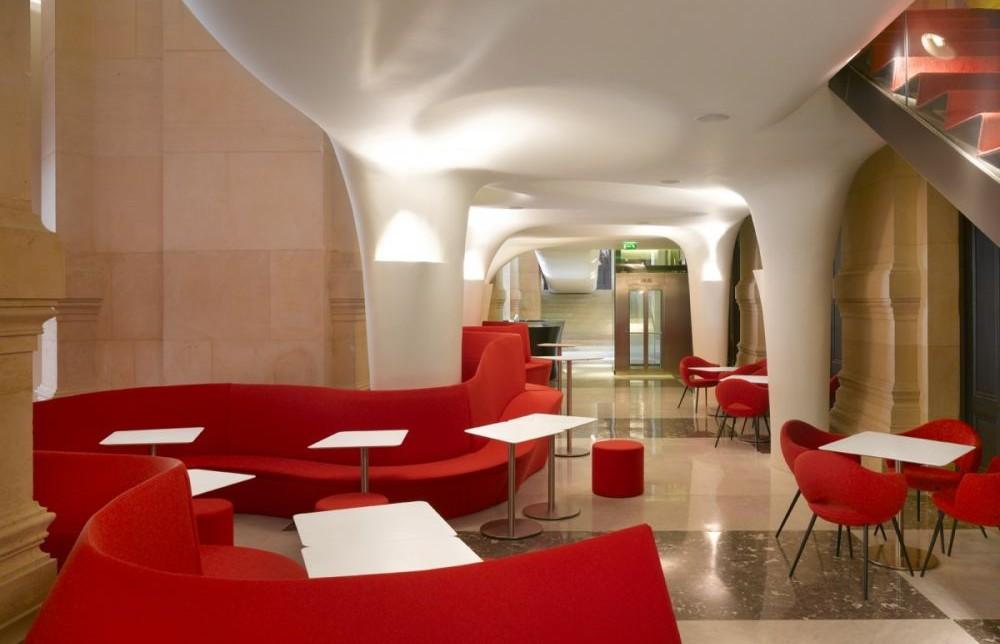 Like a « phantom », silent and insidious, the soft protean curves of the mezzanine level float above the dinner guests, covering the space with a surface that bends and undulates.

Behind the columns of the east facade of the Opera Garnier, the restaurant is located in a place where, when the building first opened, horse-drawn carriages would drop off ticket holders, arriving for a performance.

Creating a new space in the Opera Garnier meant following strict guidelines concerning the historical character of the monument: in order to ensure the possibility of completely removing the project without damage to the existing structure, we were not allowed to touch any of the walls, the pillars, or the ceiling.

The facade of the restaurant is a veil of undulating glass, sliding between each pillar. With no visible structure, the glass is held in place by a single strip of bent steel running along the arched curve of the ceiling. This steel strip is fixed to the upper cornices of the columns 6 meters above the ground with stainless steel connecting rods. The glass is therefore held in place as if « by magic ».

The façade therefore allows for clear views and a minimum impact.

Providing enough floor space to seat 90 people was another requirement for this limited space. The mezzanine was therefore created as a continuous surface. Narrow columns extend upwards towards the molded plaster hull, which curves to form the edges of the handrail. This vessel, which has been slipped under the cupola, is a cloud formation floating between the existing elements of the room without touching them. It’s an allusion to the changing form of the phantom, whose white veil glides surreptitiously in space.

Quietly, almost insidiously, the soft protean curves of the mezzanine cover the space with a volume that arches, undulates, and floats above the guests. The space is open and turned outward.

The keystone of the existing dome remains visible from the ground floor, while suddenly becoming very close to the diners on the upper level. Sitting close to the stone arches of the ceiling, the symmetry of the cupola is no longer apparent, the reference points change, and sense perception of the space is altered. In the curve of the hull above, immersed in warm red tones, the upper level becomes an intimate and private space.

The red carpeting flows down the steps of the main staircase dramatically, spreading out into the center of the black floor below, and running under the tables until it arrives at the edge of the facade.

At the back of the room, in the area closest to the entrance to the Opera, the space becomes more protected and private, contrasting with the whiteness of the rest of the room. Long red booths line this space, creating the « lounge » area for the restaurant. At the outside edge of the lounge, a long black bar snakes around a nearby column.

The design for this project is based around creating a space that will highlight the restaurant inside the Opera Garnier, without mimicking the existing monument, but respecting it while affirming its truly contemporary character.