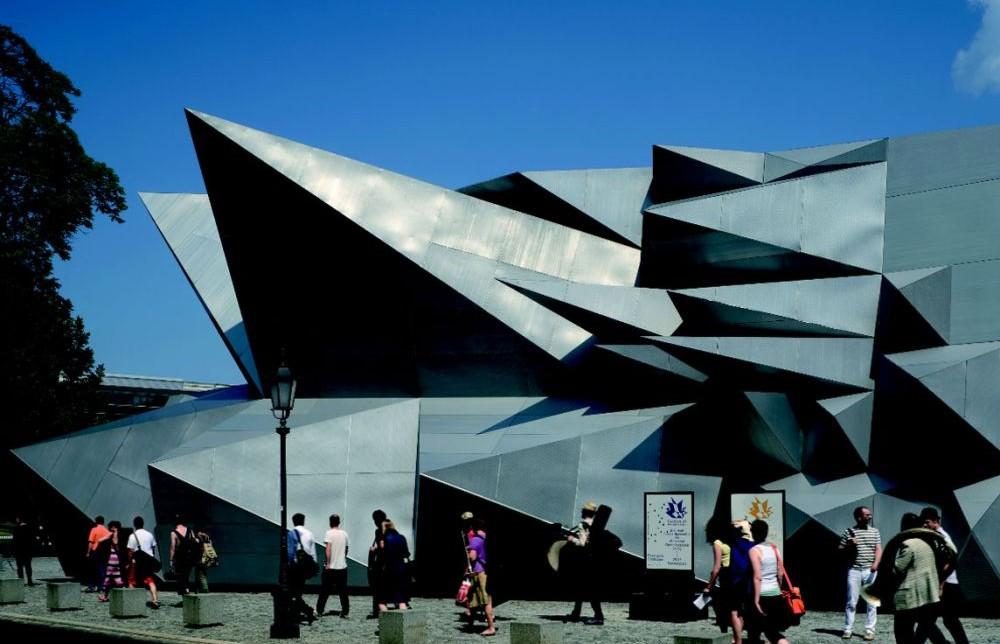 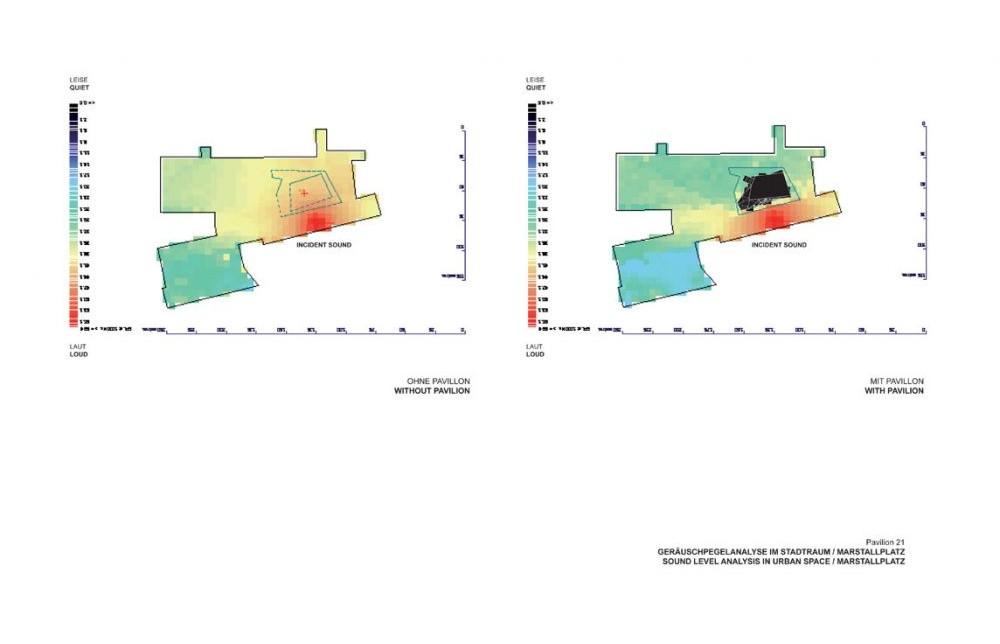 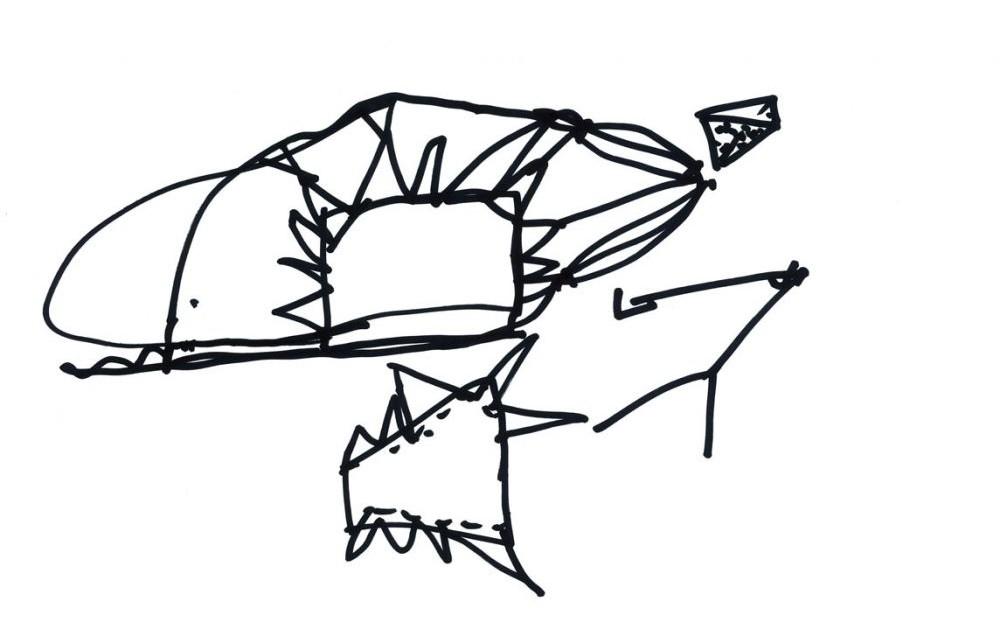 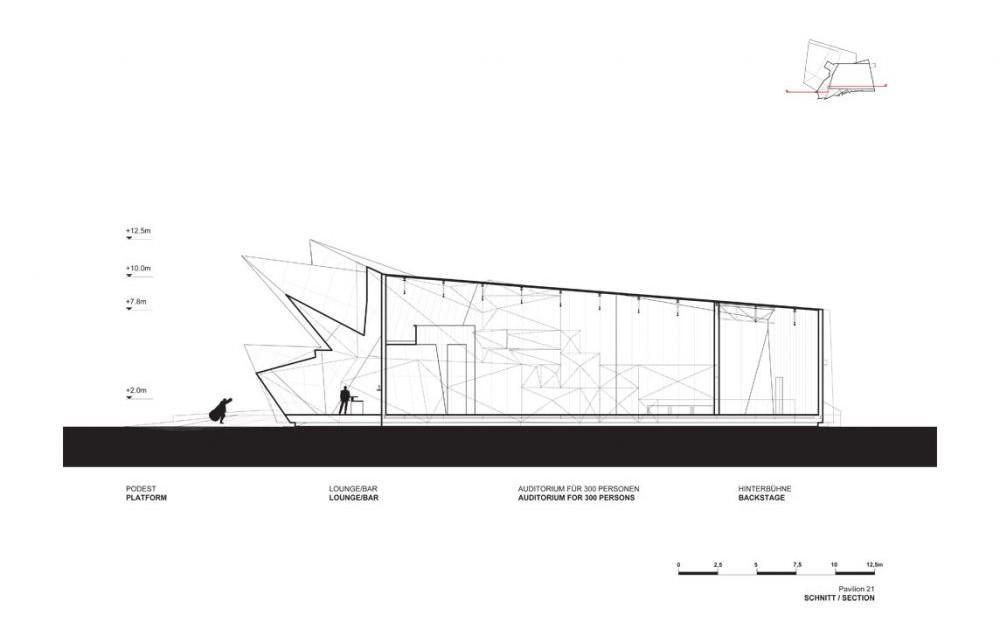 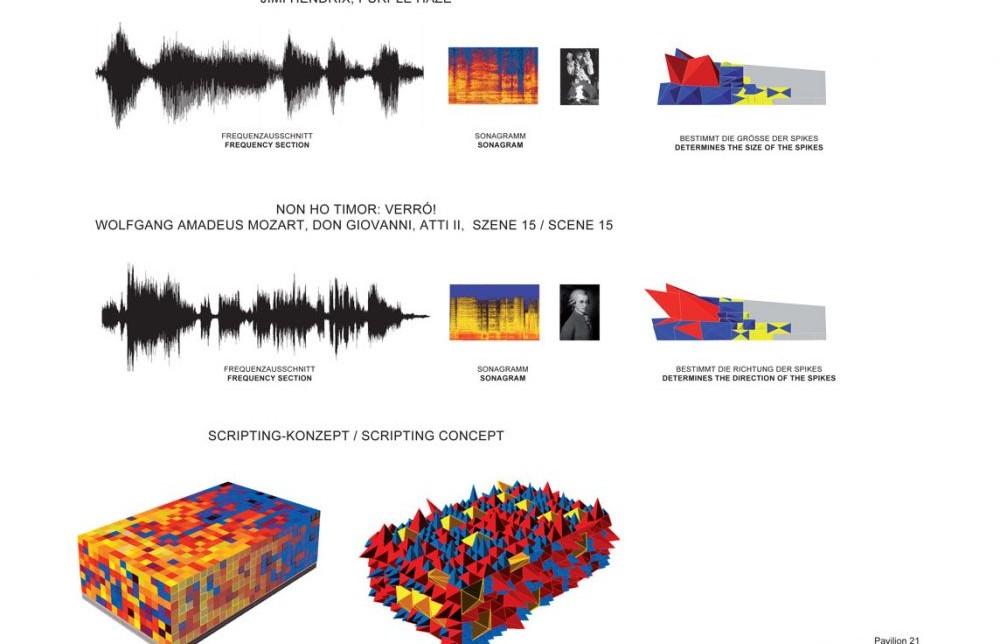 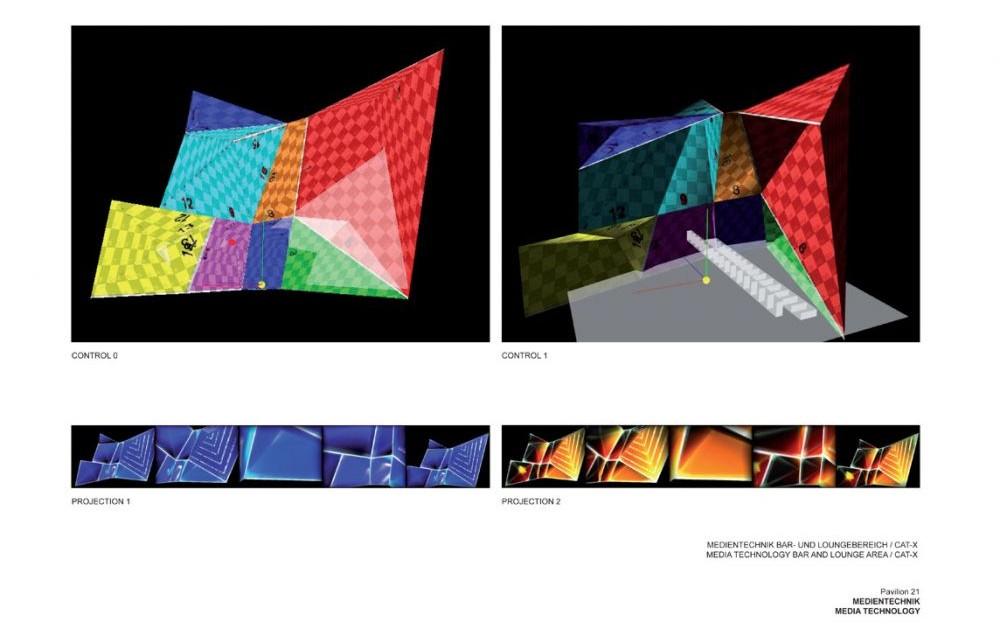 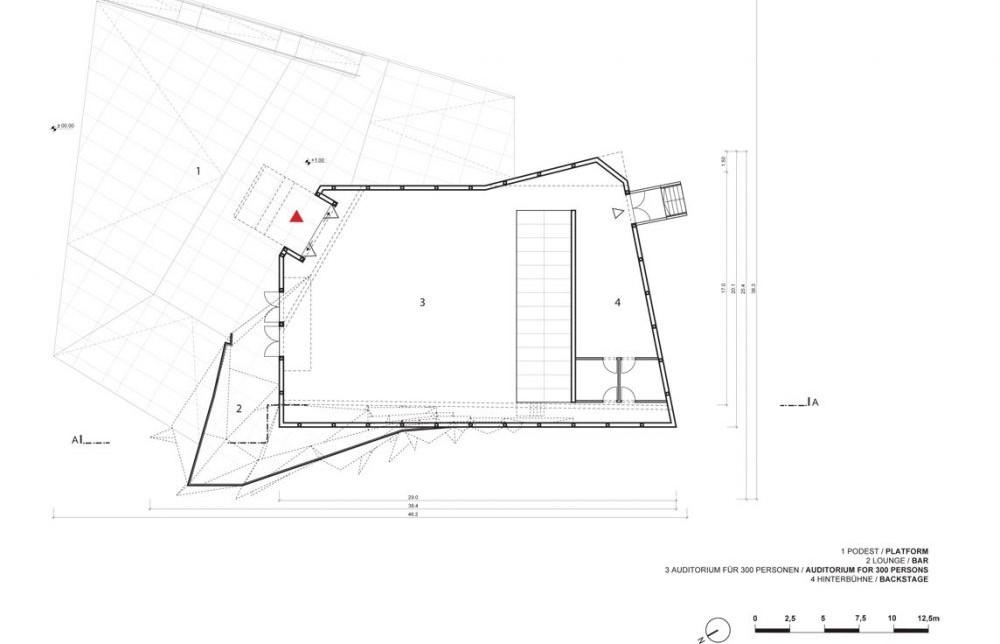 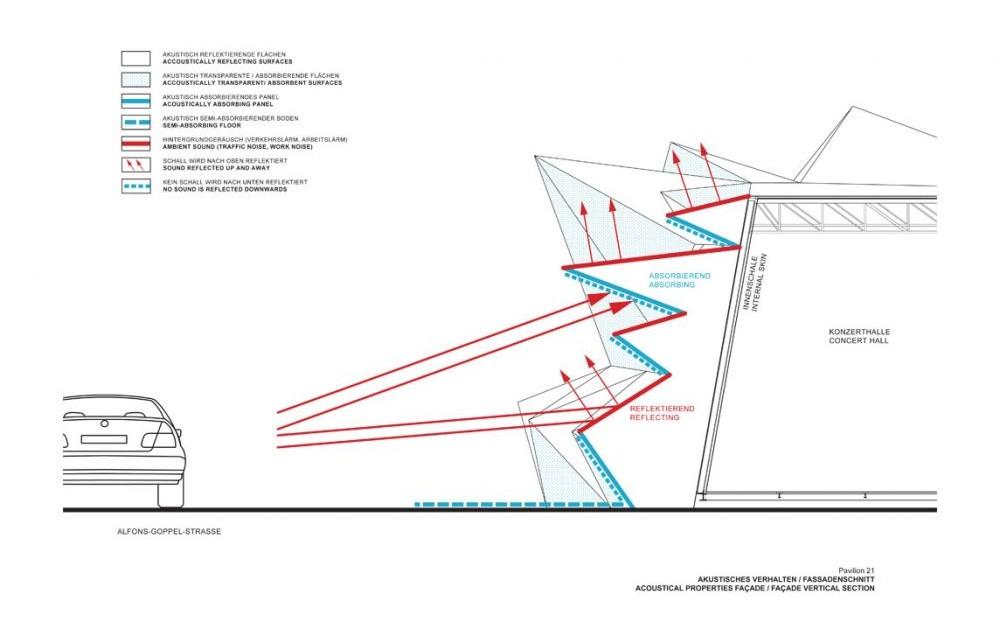 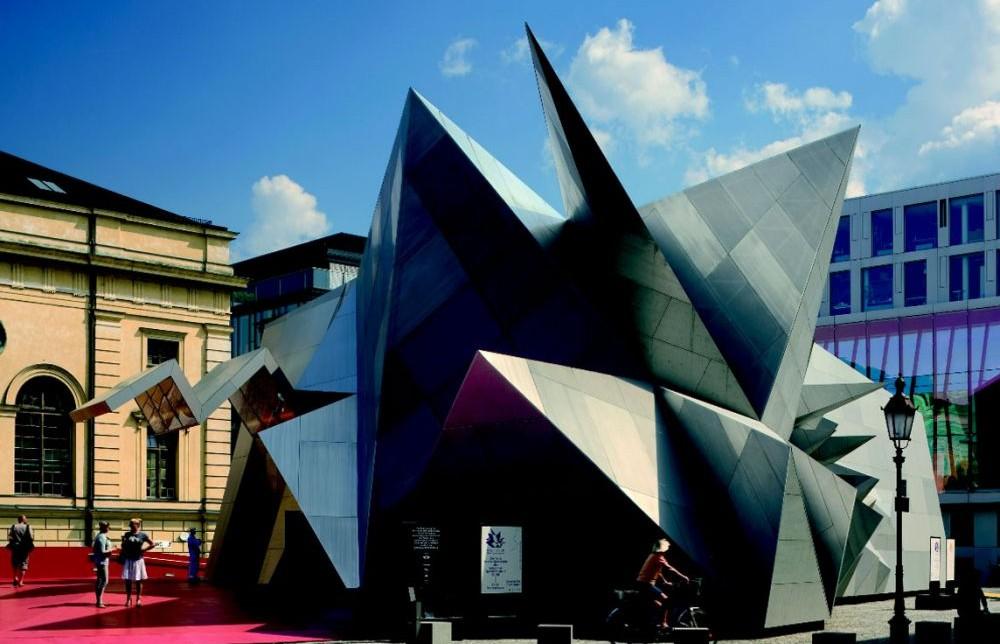 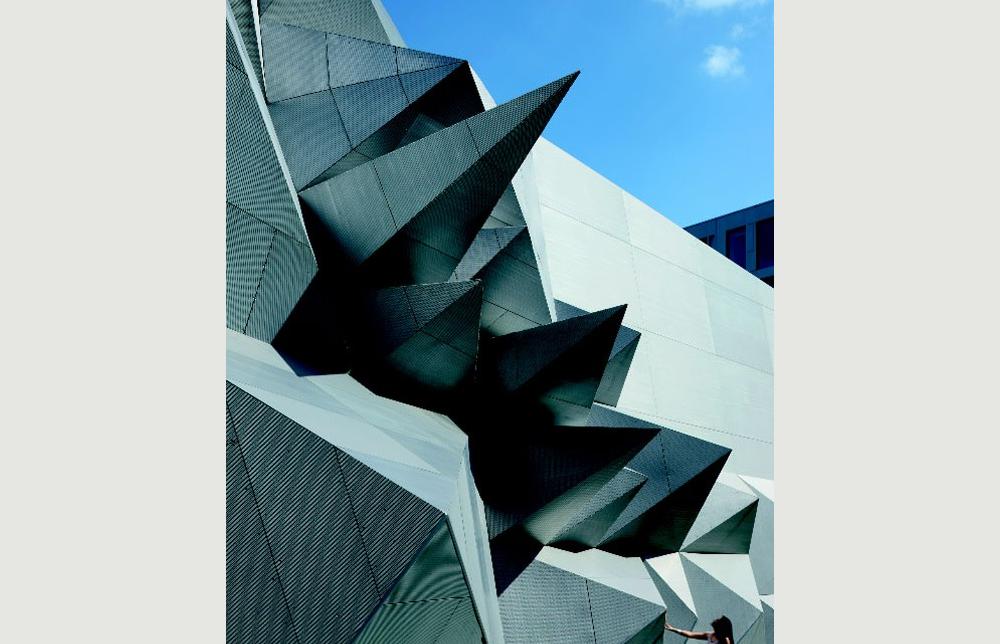 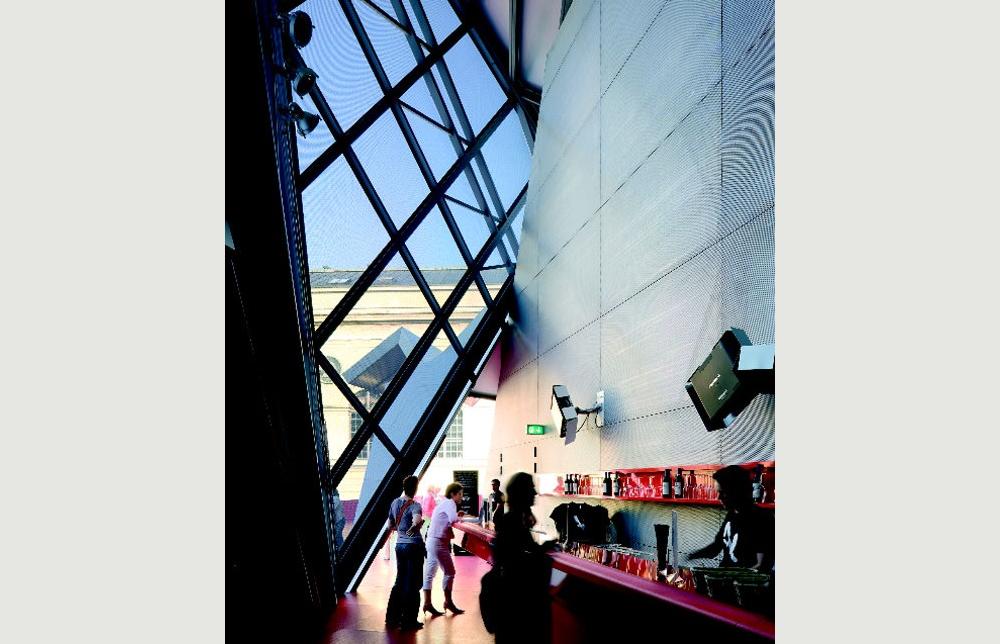 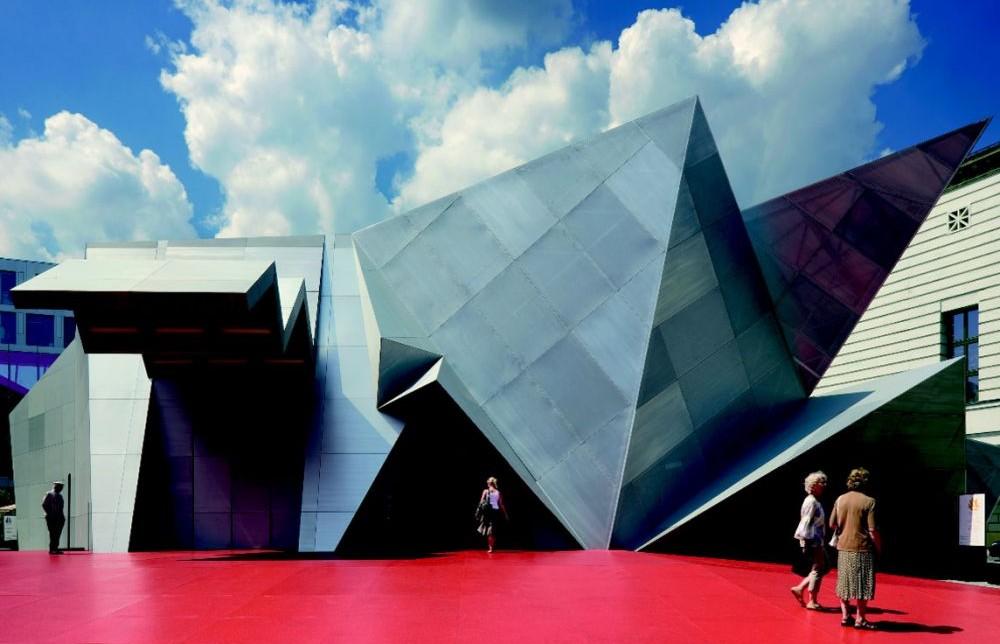 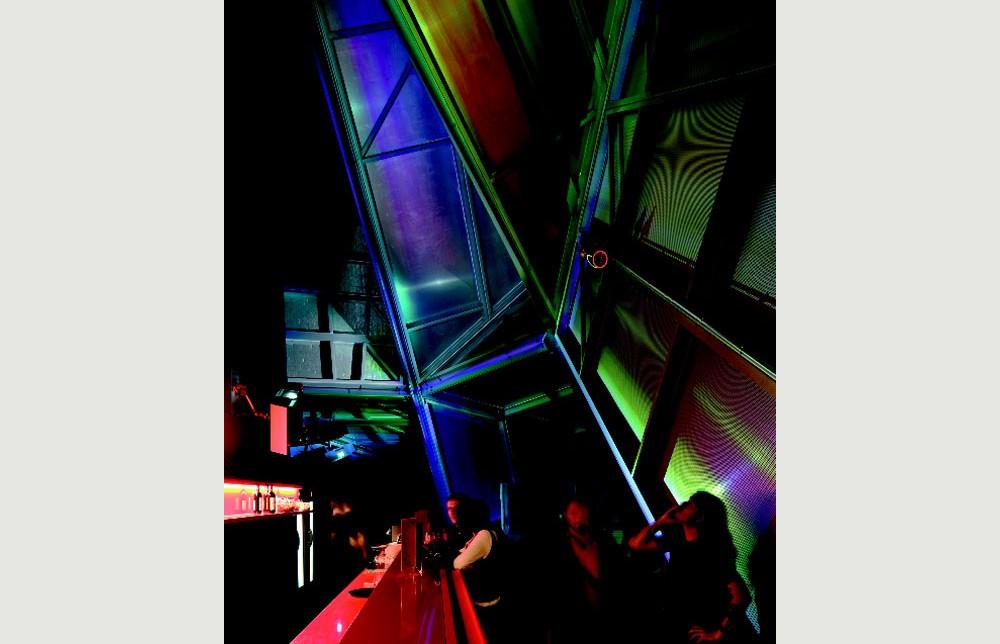 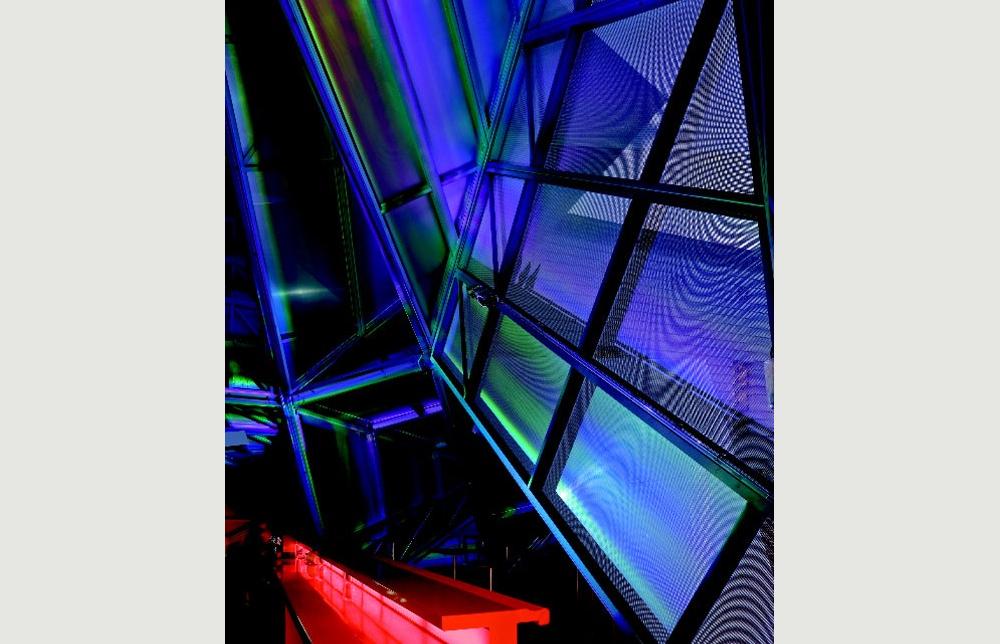 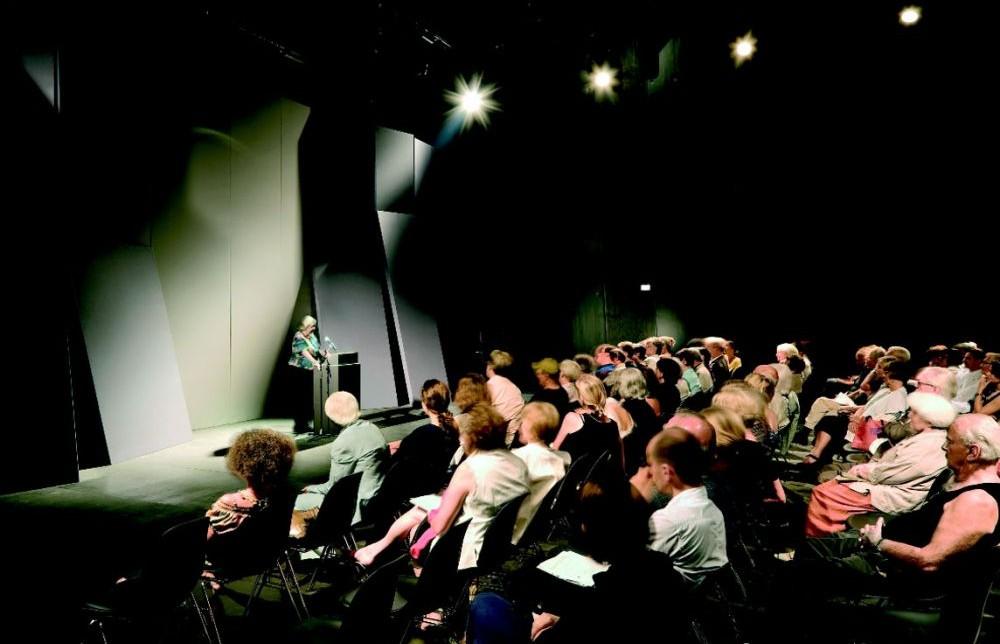 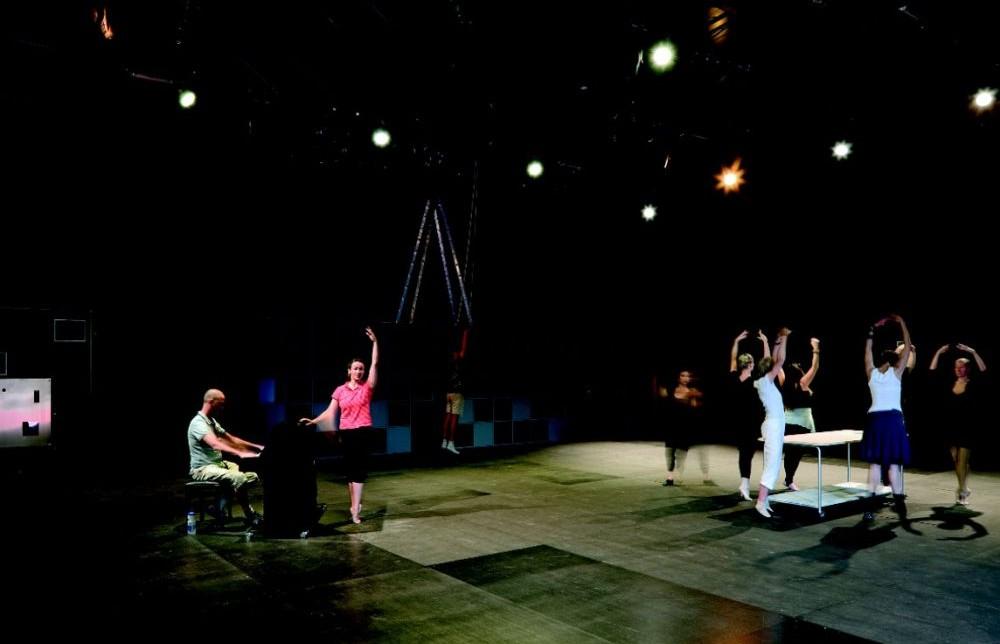 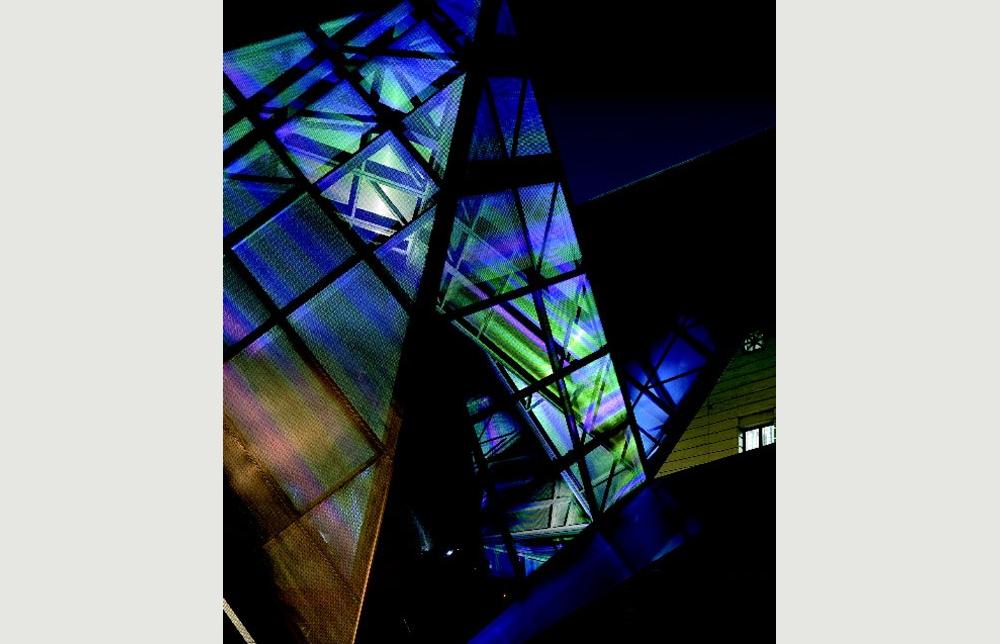 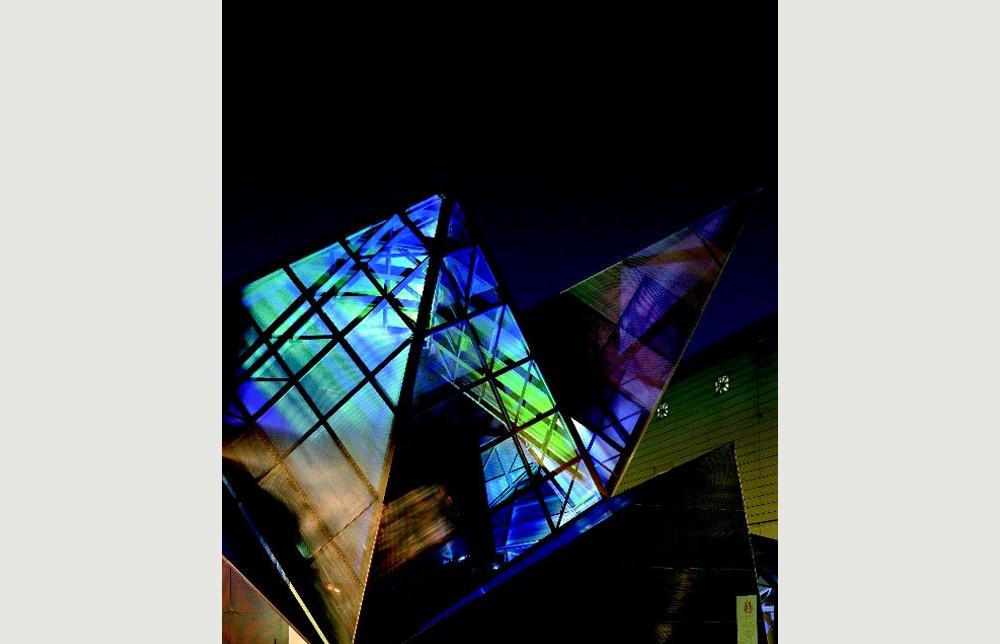 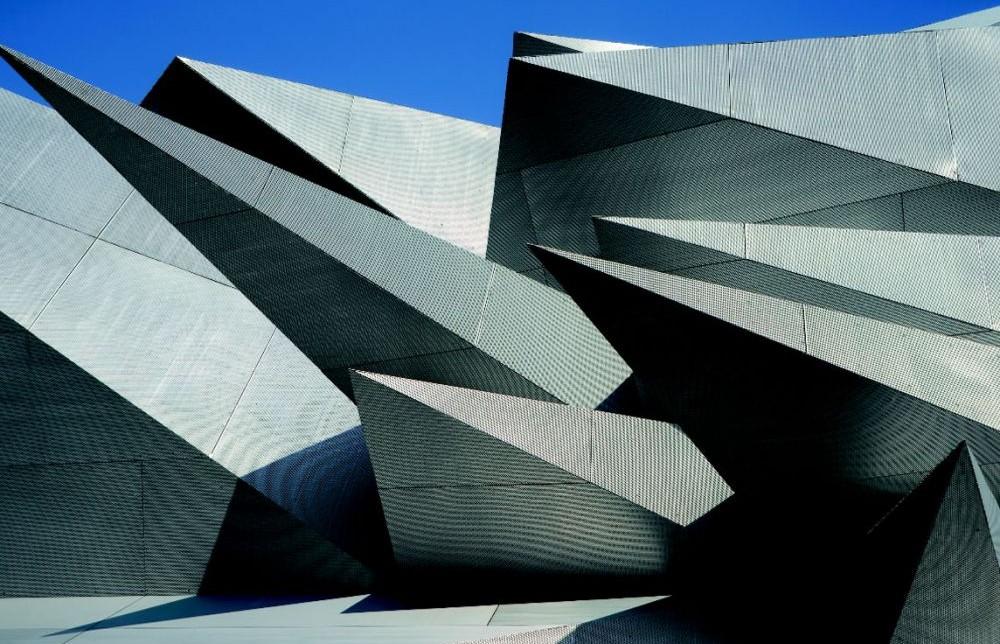 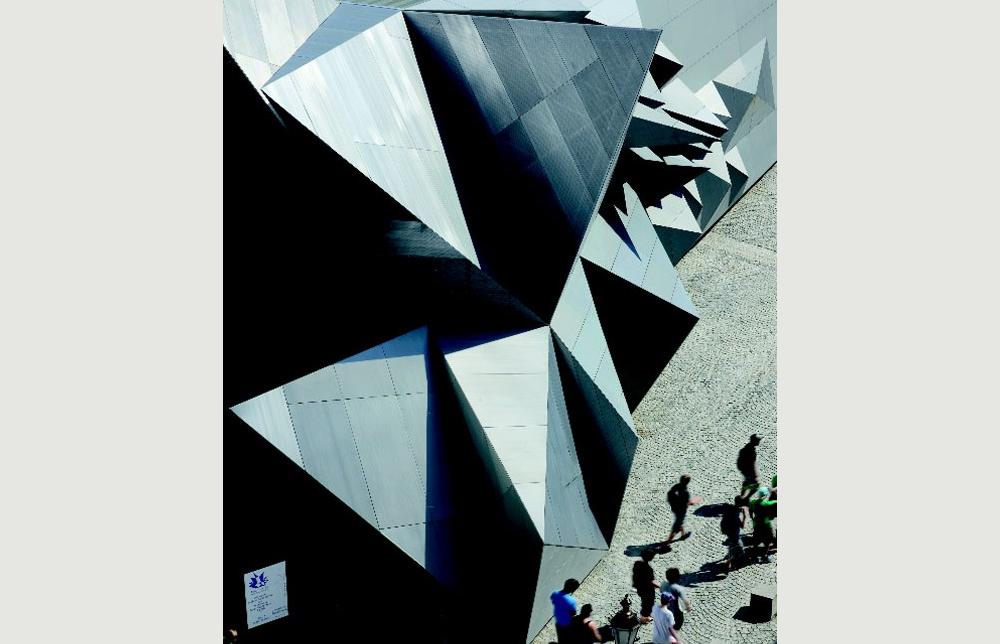 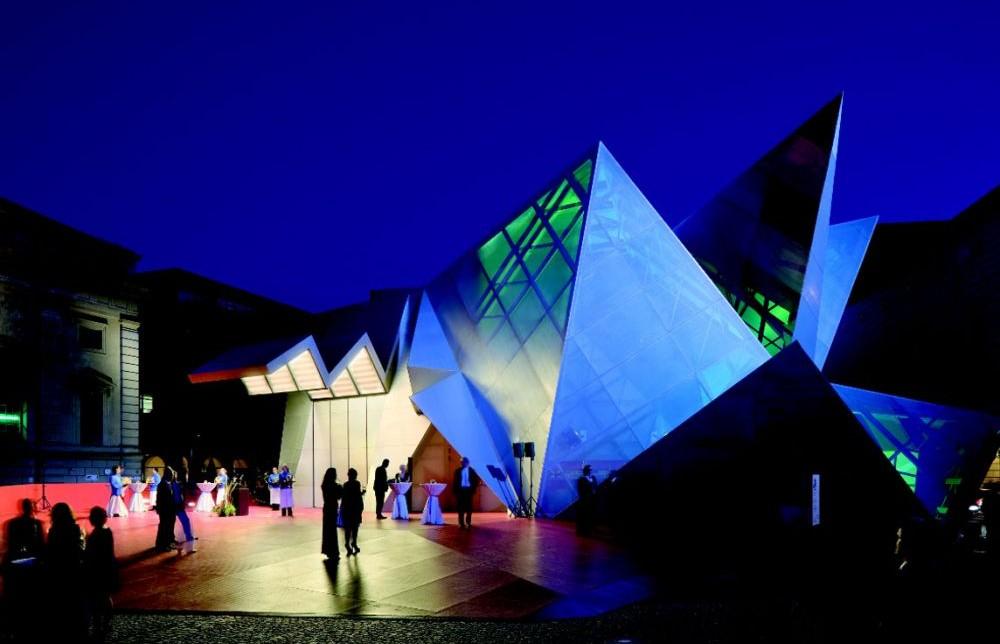 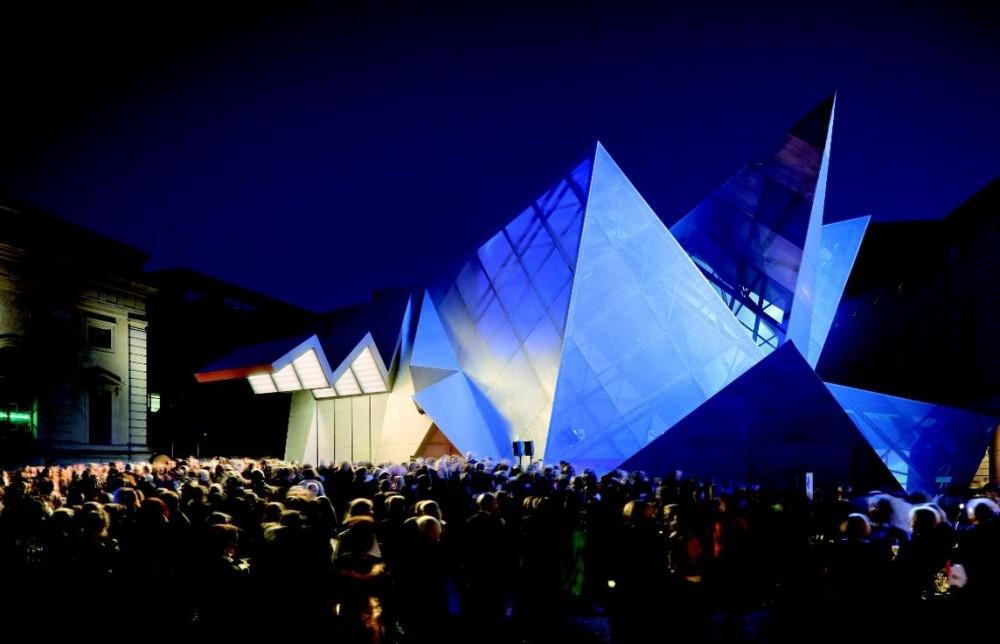 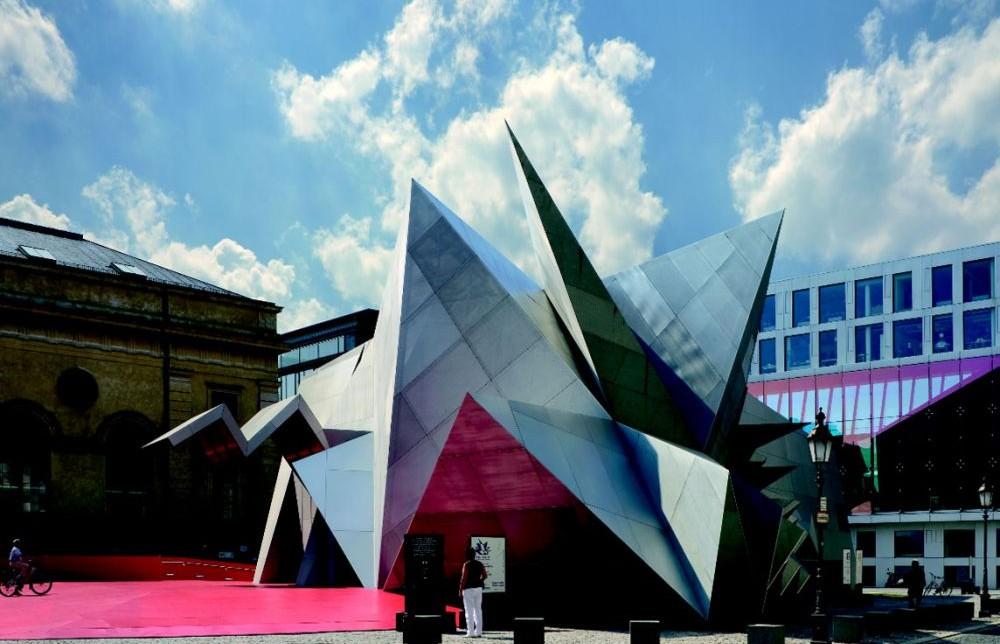 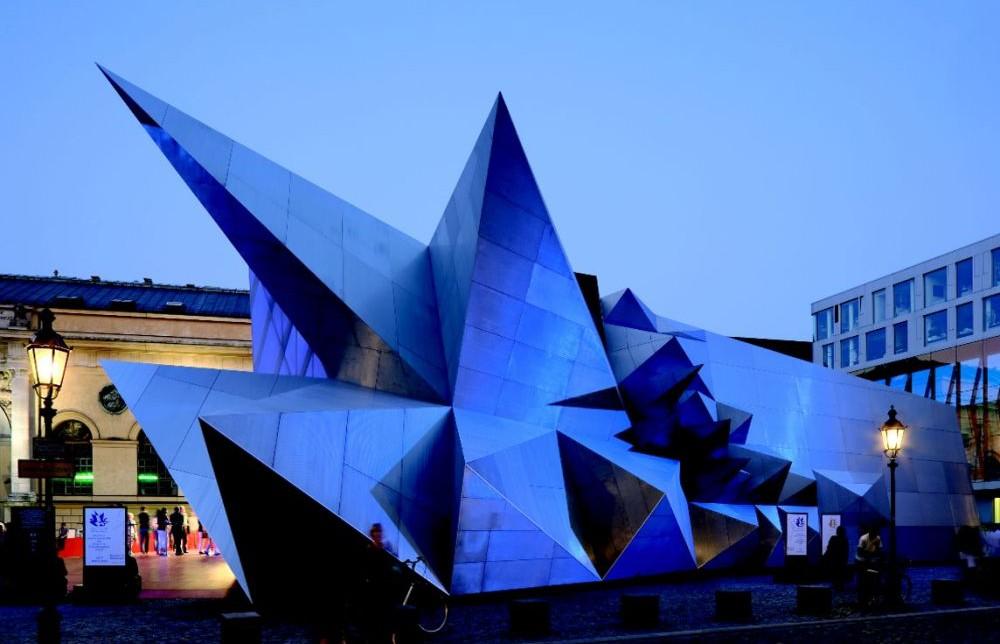 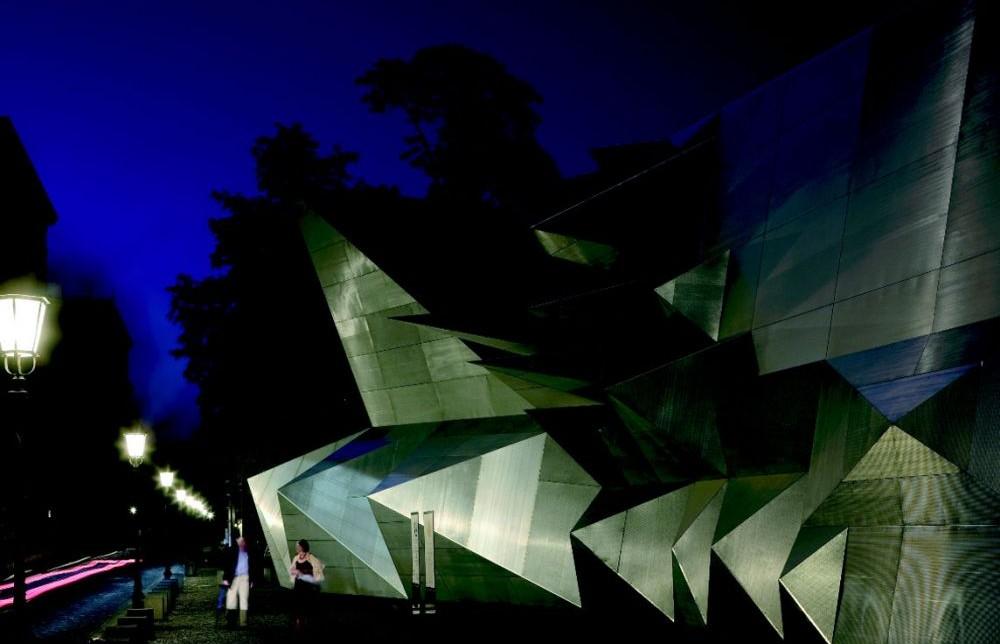 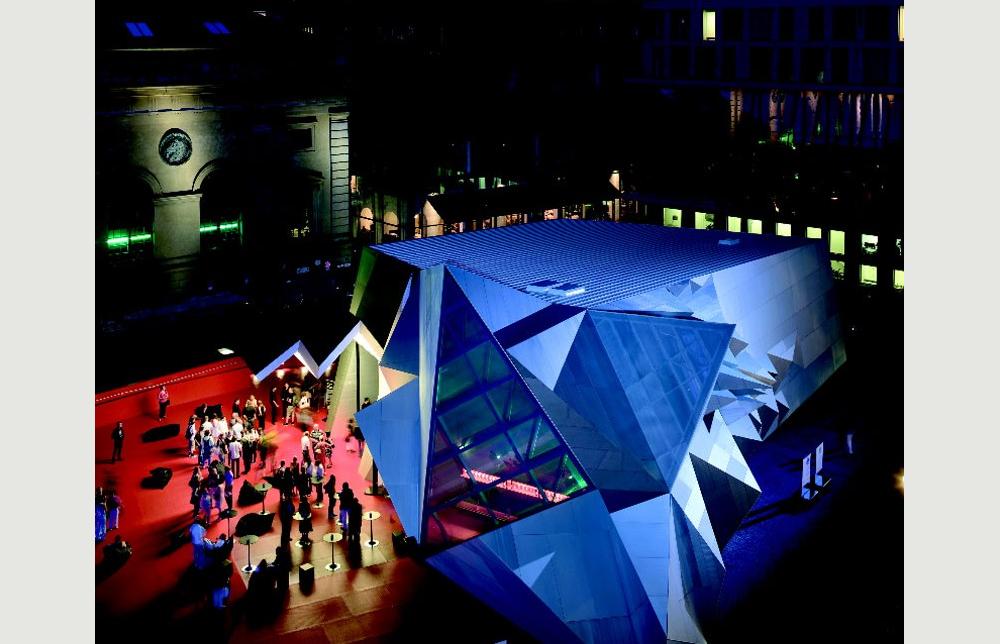 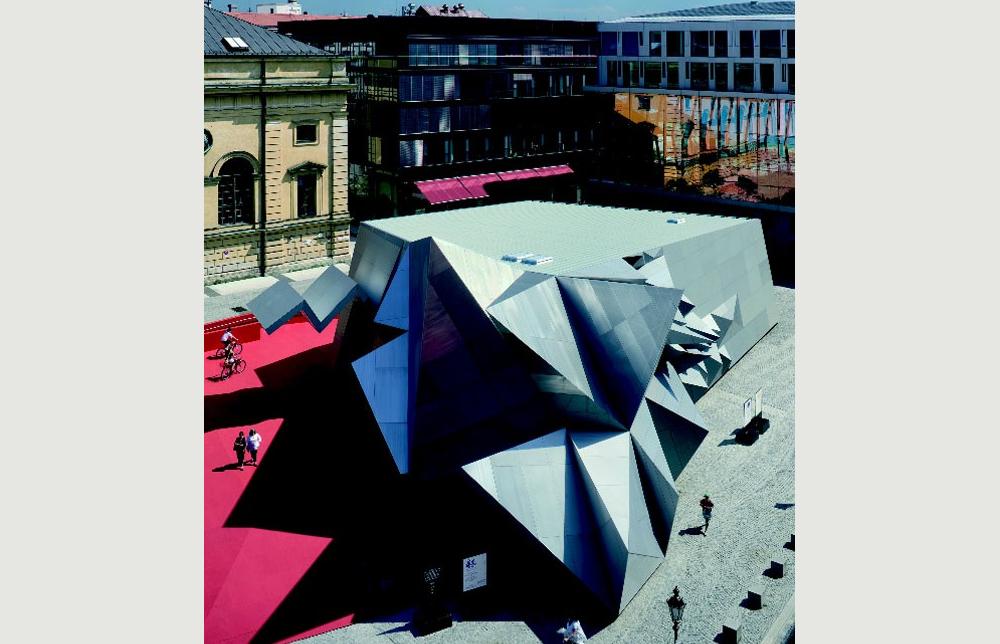 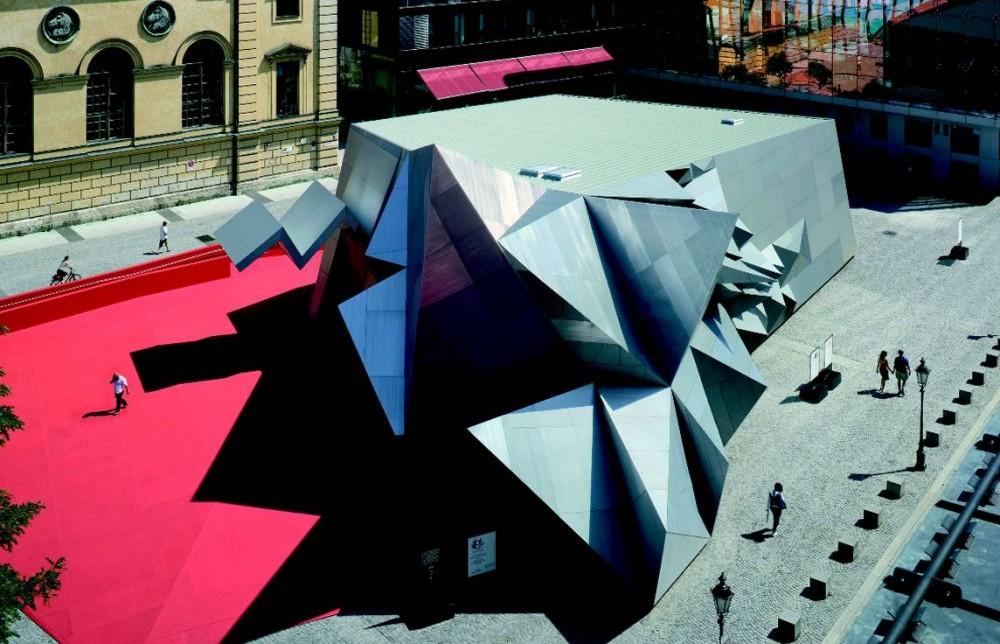 Concept
The task which we had to solve with our design was to create a space with 300 seats or 700 standing spectators for experimental performances of the Bavarian State Opera. The Pavilion should be dismountable, transportable and re-mountable and make the respective urban space distinctive through its shape.

Mass and therefore weight are the decisive criteria for good acoustics. The conception of the Pavilion 21 MINI Opera Space therefore had to overcome a contradiction: to design a lightweight construction which must allow to be dis- and re-assembled quickly, but which at the same time meets the acoustical requirements of a concert hall.

Hence how do we create the conditions for good acoustics despite a reduction of mass? Already the first considerations fixed in drawings show the basic concept of the Pavilion to introduce elements which are on the one hand the spatial transformation of sound sequences, and which on the other hand develop sound reflecting and absorbing properties through their pyramid-like shape: Soundscaping.

The idea to combine architecture with music is not new. Also the term soundscaping is not new. Similar to landscaping it involves Gestalt. Soundscaping originates in the 1940s and designates a method of composing. In architecture, Le Corbusier and Iannis Xenakis together engaged in the topic of music and architecture when they thought about three-dimensional implementation of musical compositions Le Corbusiers Philips Pavilion and the partition of the windows in La Tourette.

As a starting point towards the abstraction of music into spatial form, a sequence from the song Purple Haze by Jimi Hendrix and a passage from Don Giovanni by Mozart were transcribed. Through the analysis of frequence sections from these pieces of music and through the combination with the computer generated 3D model, the sequences are translated into pyramidal spike constructions by means of parametric scripting.

The development of the acoustical elements was carried out together with the acoustics department of Arup; the applied construction and materials were worked out with Frener Reifer.

Light Installation
The architectural design of the inner space is complemented and enhanced by an installation in the lounge developed by cat-x. The complex multiple projection not only illuminates the interior of the lounge, but changes the perception of the space, so that the architecture seems to move.

The oscillating movements interact with the sound coming from the Opera Pavilion and react to the current performances. Thereby the content – the music – is transported from the auditorium to the lounge, mapping audio inside out. According to the formal strategy of the architectural concept the transformation of the spectral information of an audio signal as basic element of the form is translated into a real-time concept for the design of the projections.

Space is transformed into sound, sound is turned into light and light re- and disforms the structure, thus creating an abstracted mini opera feedback space.

The edges of the architectural structure are emphasized by brighter projections. To enhance the contrast, the illuminatoin between them is reduced. A minimalistic color- and sound flow covers the surfaces; the spectral information abstracted from the current audio signal flows into these spaces.