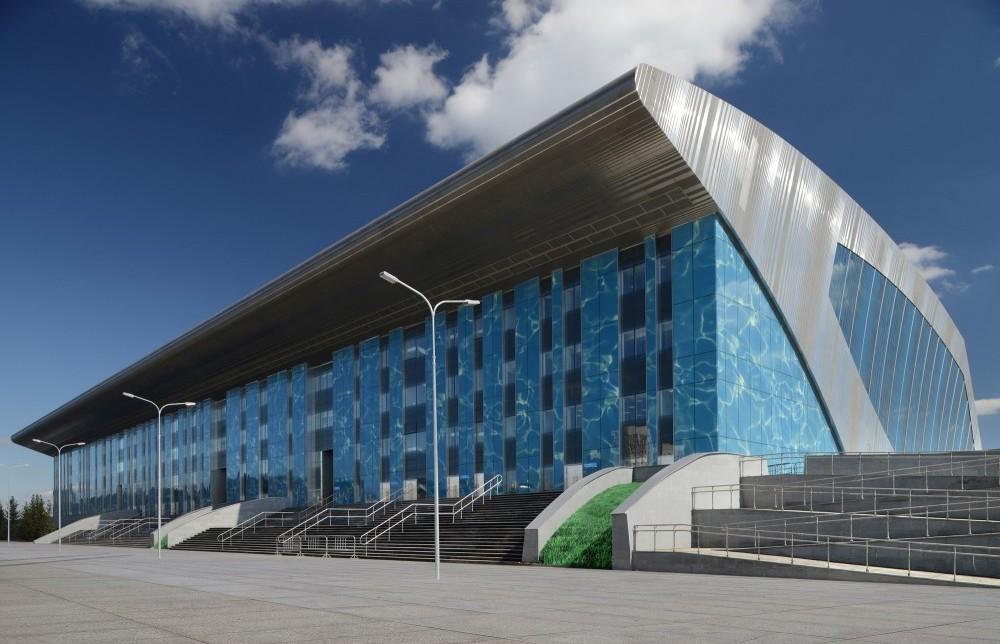 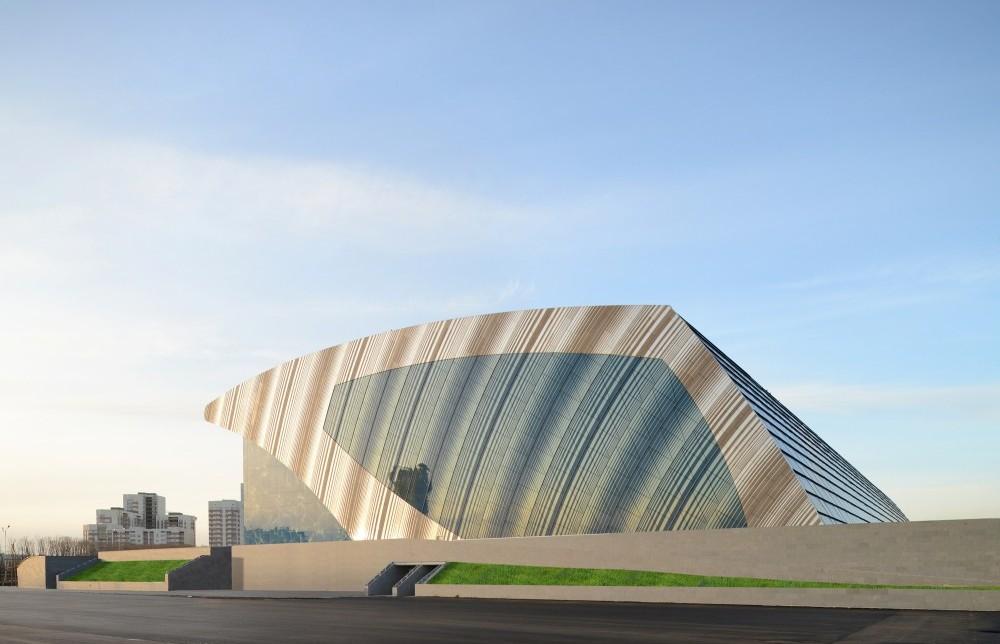 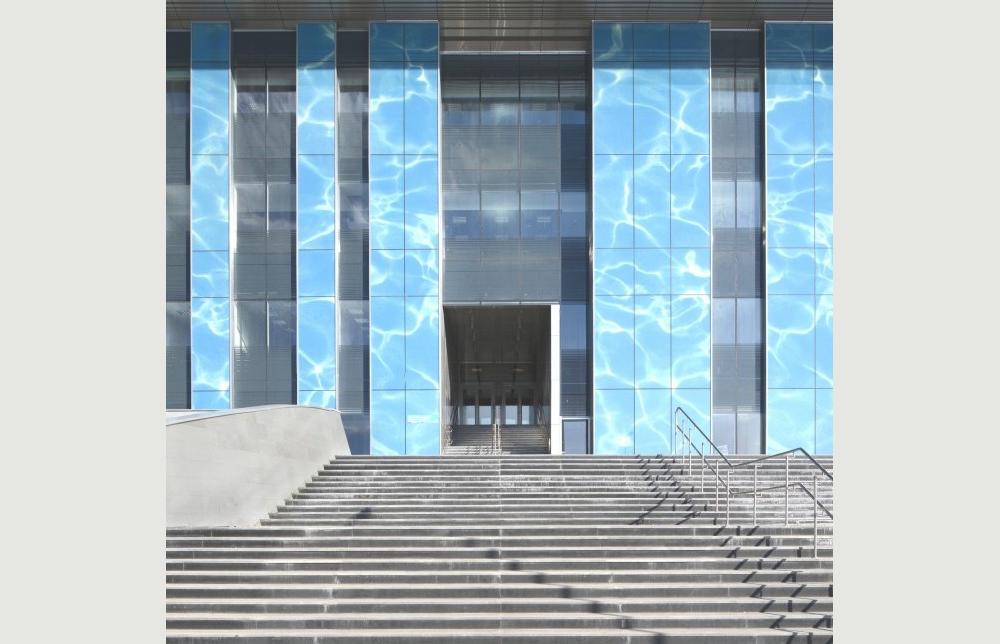 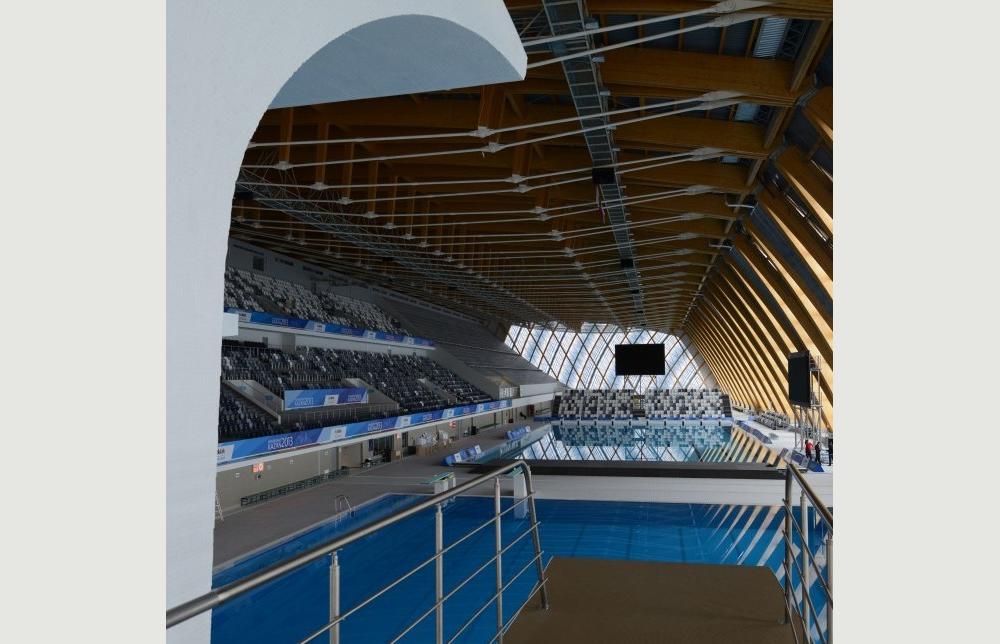 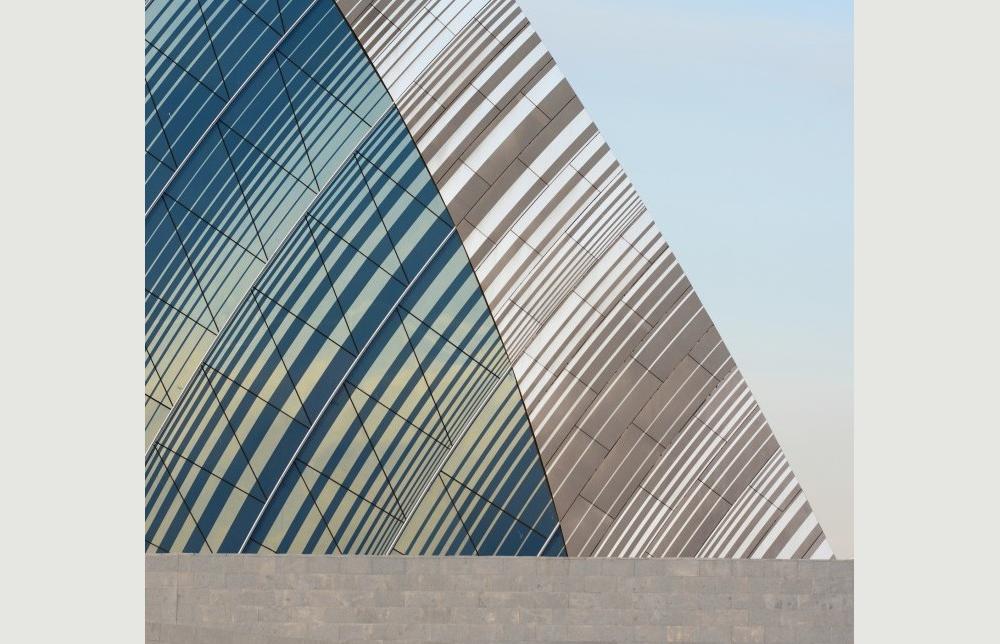 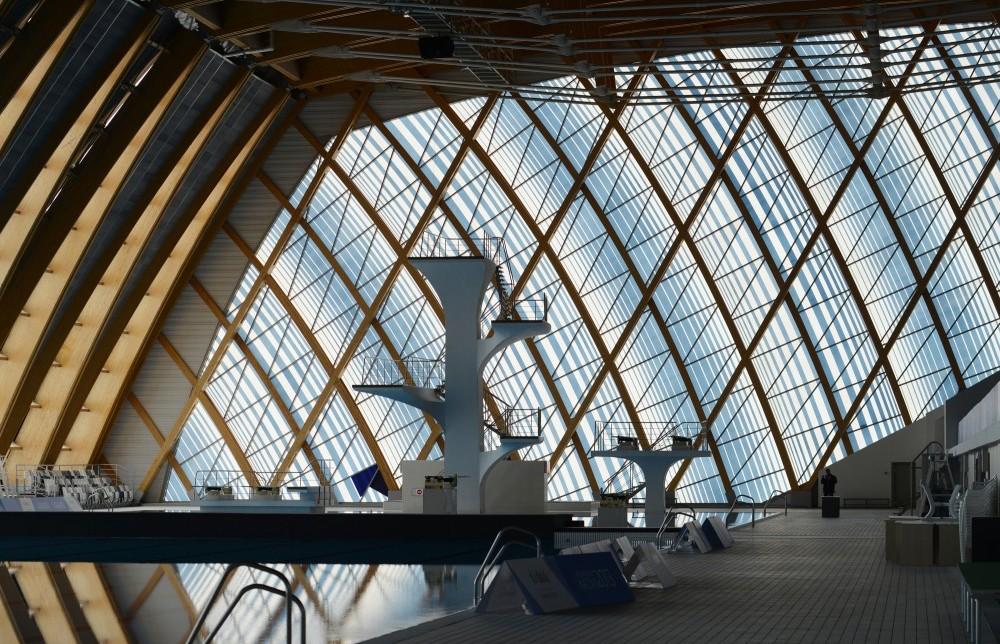 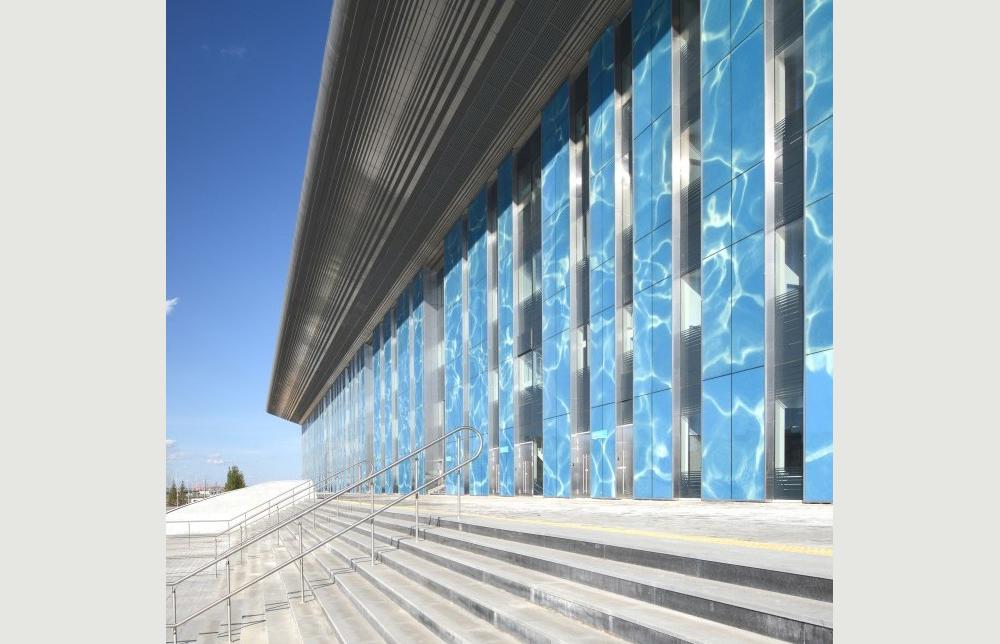 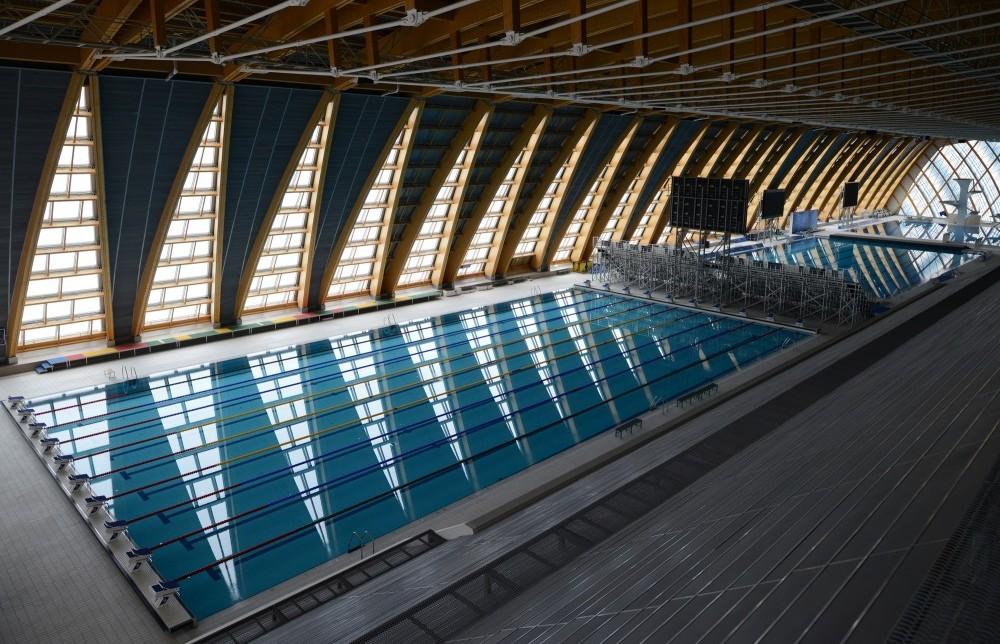 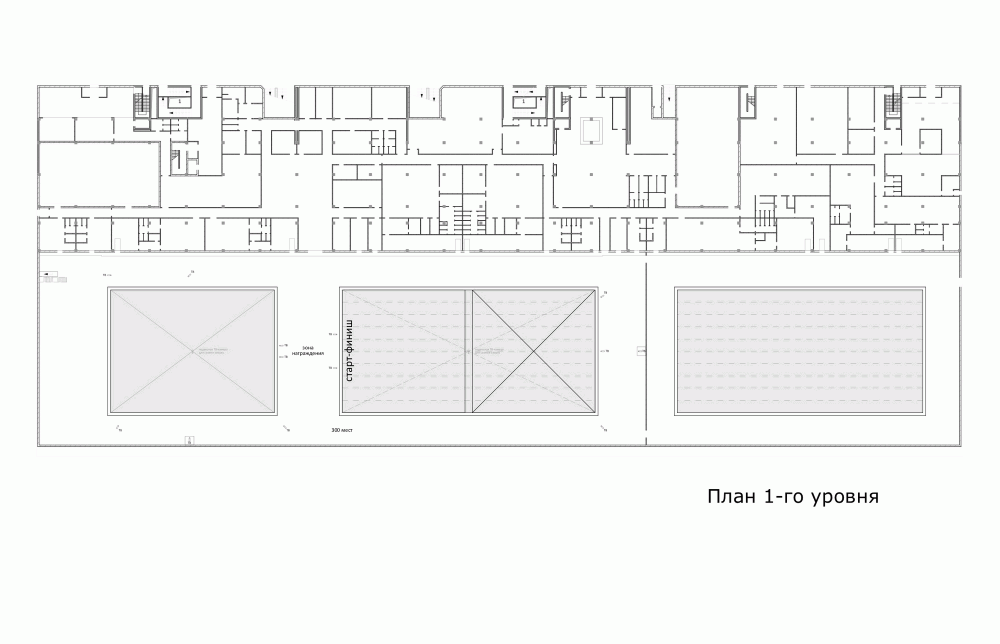 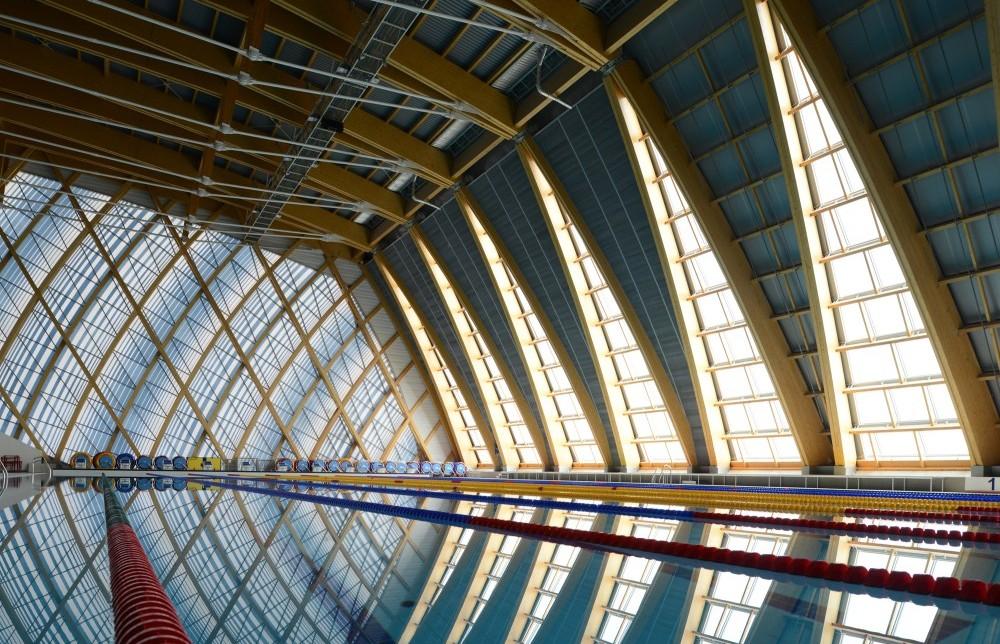 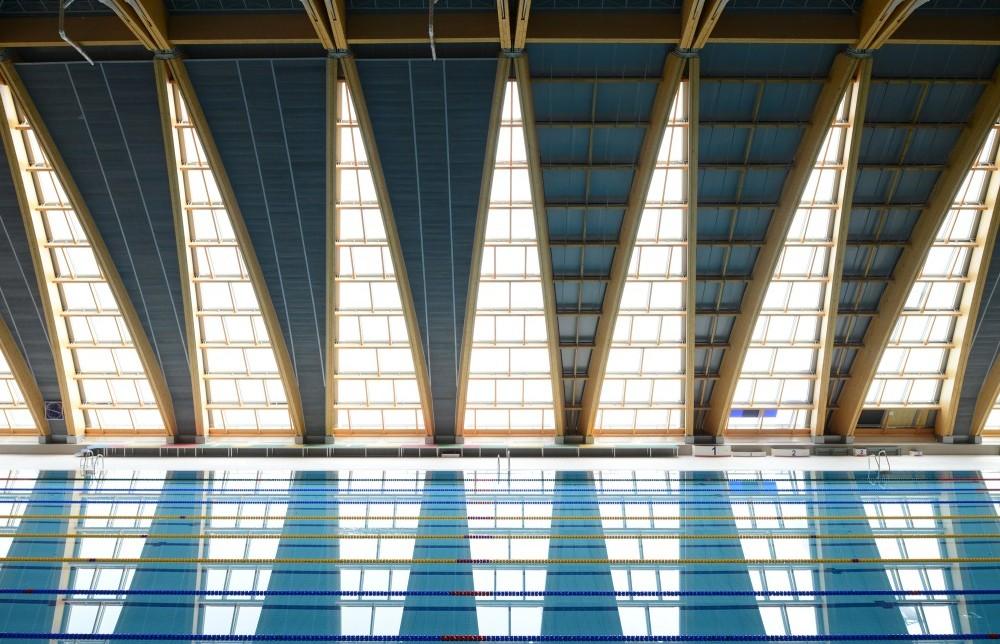 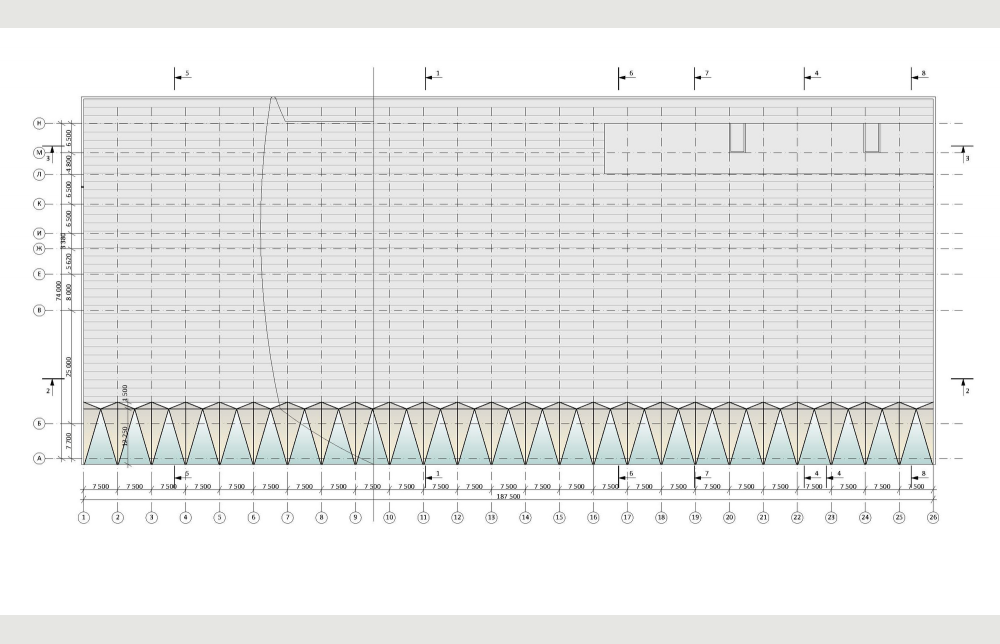 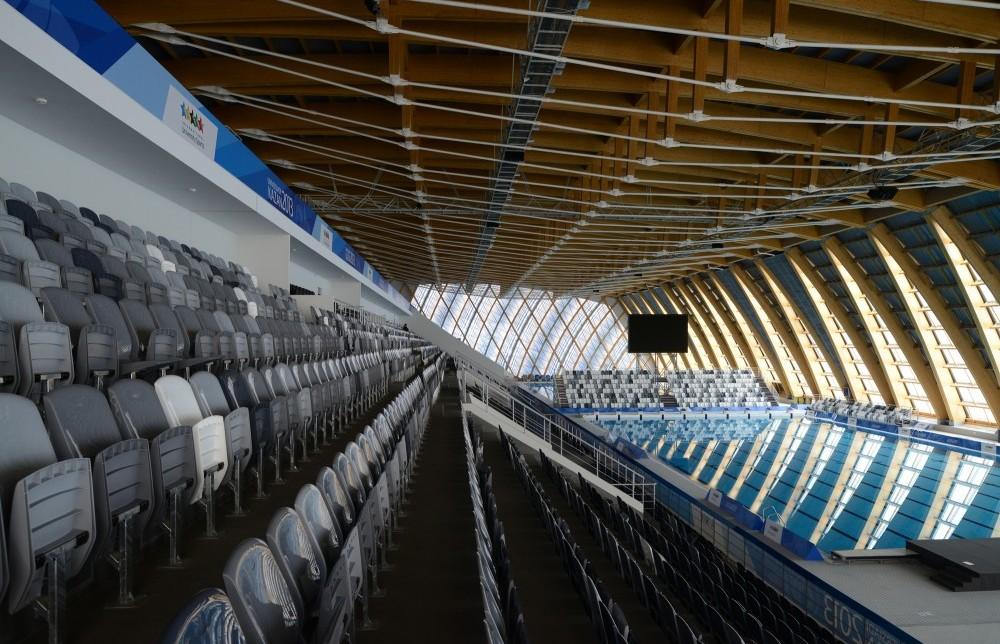 Palace of water sports is planned in the territory of Student games park and included in the complex of sport constructions, raised in Kazan city within the frames of preparation to the conduct of worldwide summer student games in 2013. During student games there will be organized contests in water polo, swimming, platform diving, synchronized diving, synchronized swimming, and after the conduct of international contests the citizens will be able to play sports, and students of Tatar state academy of physical culture, sport and tourism will be training here. Palace building (length 187.5 meters, width 84 meters), elongated along the embankment of Kazanka river represents a hall with pools and the tribunes, covered by a dynamic roof, reminding a wave movement by its outlines (maximum height 25 meters). In total therea redesigned 3 basins: universal (52×25 meters, depth 2.2 meters); basin for water jumping (33.3×25 meters, depth 5.5 meters), and one more standard basin (52×25 meters) separated from two others with the glass divider and intended for trainings as well as for fitness center visitors. The fixed tribunes, including VIP-zone, can seat approximately three thousand of people and nearly one thousand of seats can be added by special collapsible tribunes. The main functional block of the palace of water sports is located parallel to the line of the pools. The fifth floor of the building is occupied by all the main and serving spaces that are necessary for conduct of the contests of all the levels and for everyday use by Kazan residents as well. Maximum capacity of the palace reaches 3 540 seats, almost 2 thousands of which are stationary seats including commentator’s cabins and seats in VIP-zone, and 1.5 thousands of additional seats may be installed in the special demountable tribunes. The main expressive element of the building is a unique covering which constructive solution was developed jointly by the specialists of bureau SPEECH Tchoban & Kuznetsov, Ove Arup and Central Research, Design and Construction Laboratory of Wooden Constructions (CRDC LWC). As bearing elements here are used three hinges laminated wood arcs from pair curved crossbars forming structure resembling lancet arches traditional for the Tartar architecture. Choice of laminated wood structures for cover of the pool is not occasional. Specially processed wood excellently fits in the conditions of heightened humidity, besides this material adds to the interior a special expressiveness and warmth that is not the least in the conditions of severe climate. Translucent constructions are actively used in the facades of the palace of water sports. Apertures between wooden frames on the facade, looking on the river, butts of the building and 5-storey vertical openings in the main façade are filled with stained-glass windows. In addition to glass, in the facades were used stainless steel panels, processed by grinding, due to which geometric design of alternate mat and glossy bands appears in the façade that remind ripples from waves on the surface of the water.