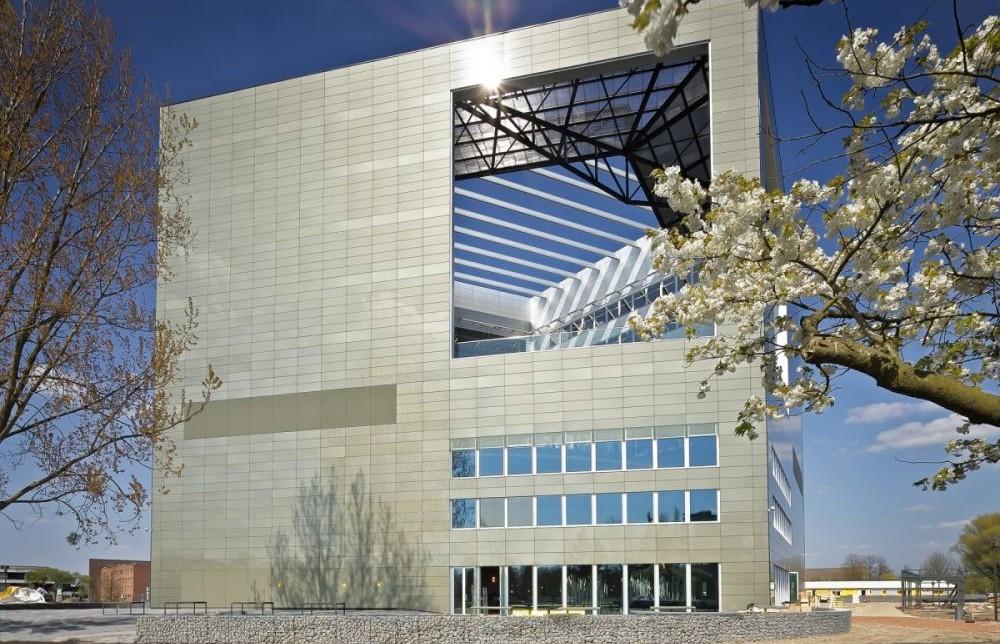 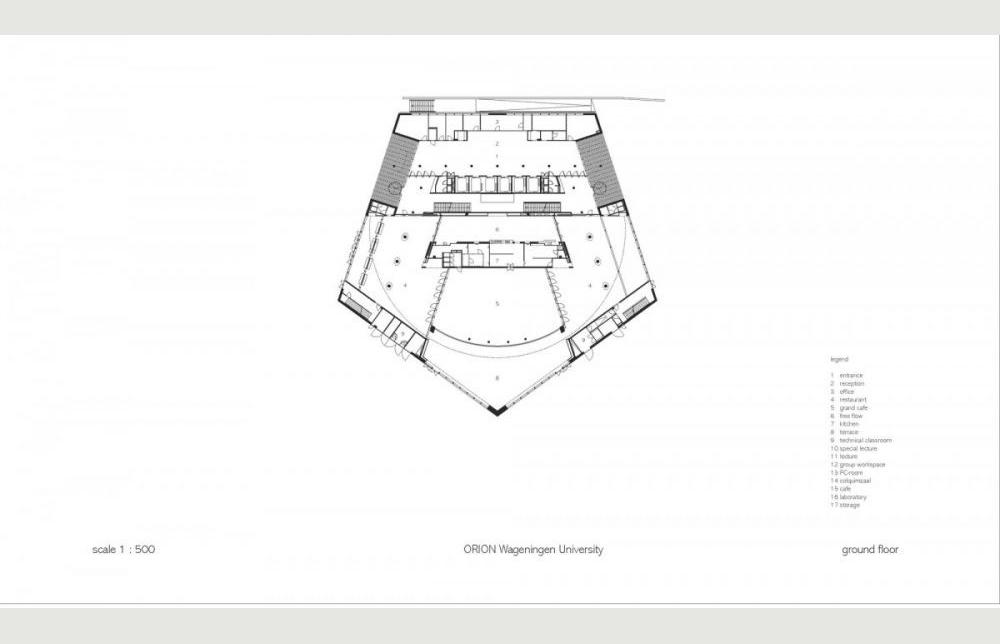 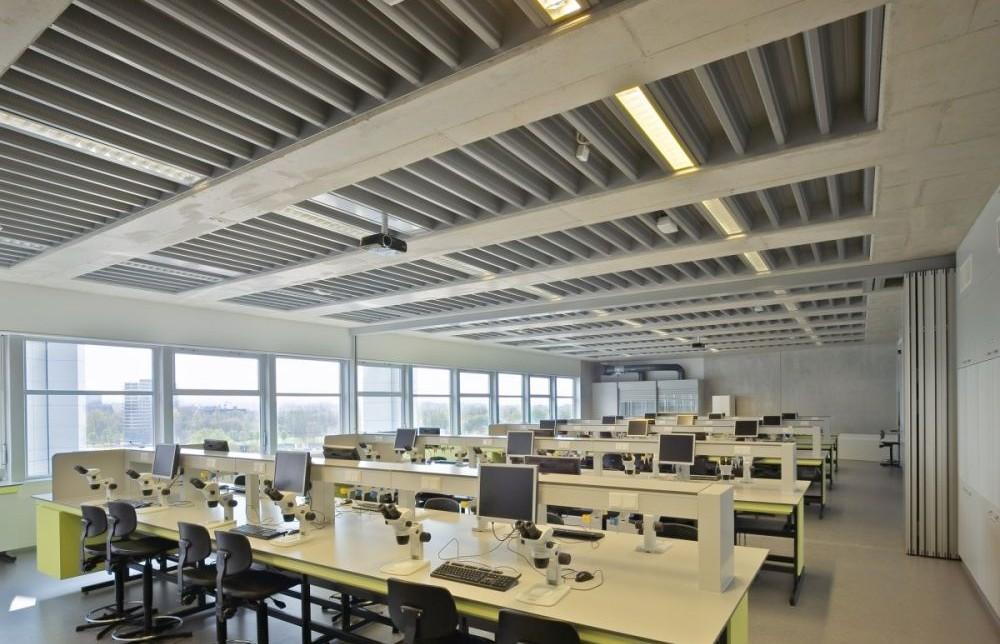 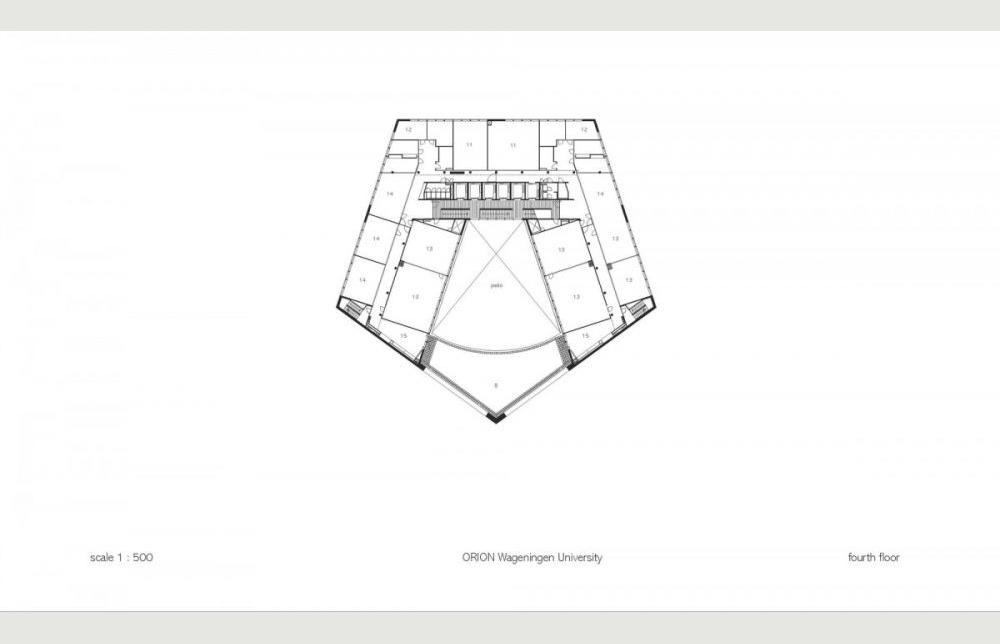 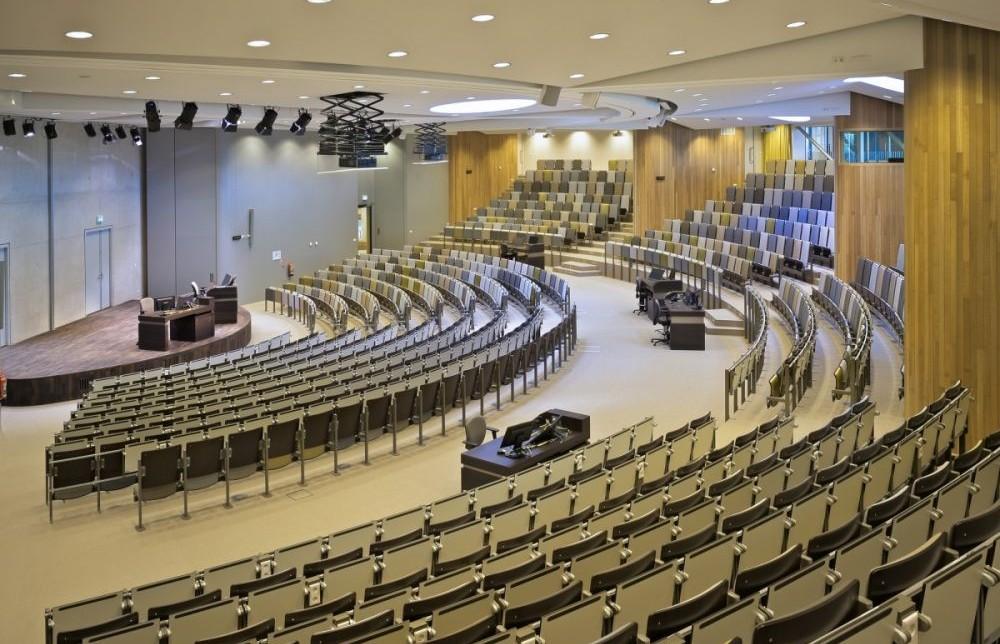 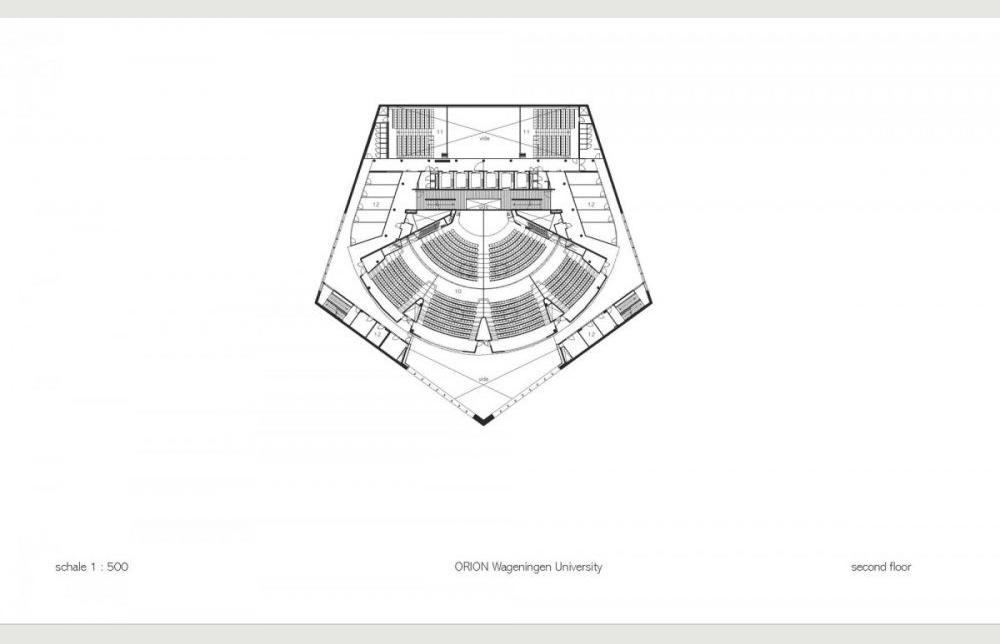 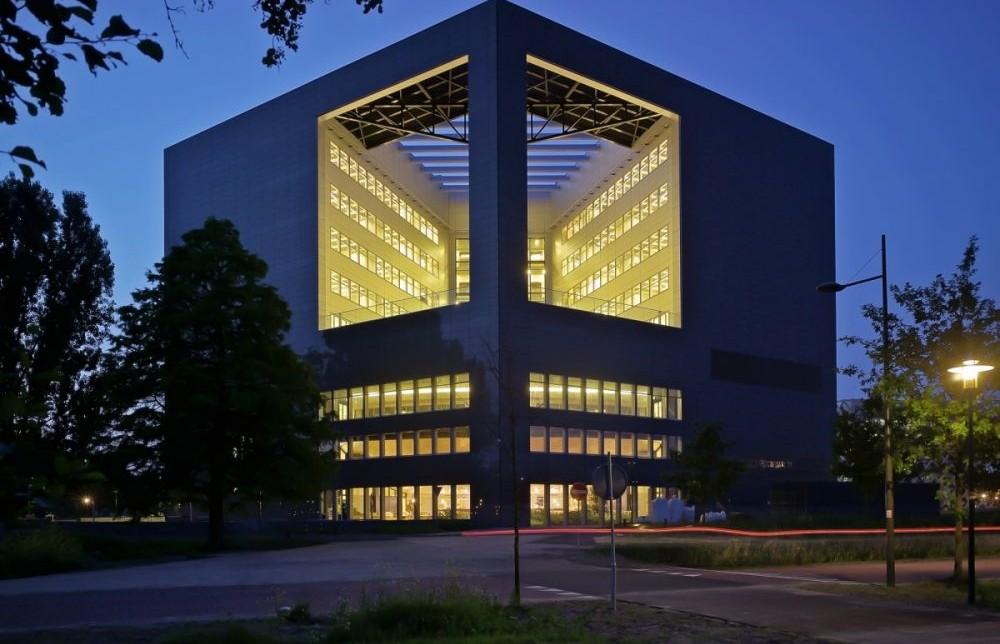 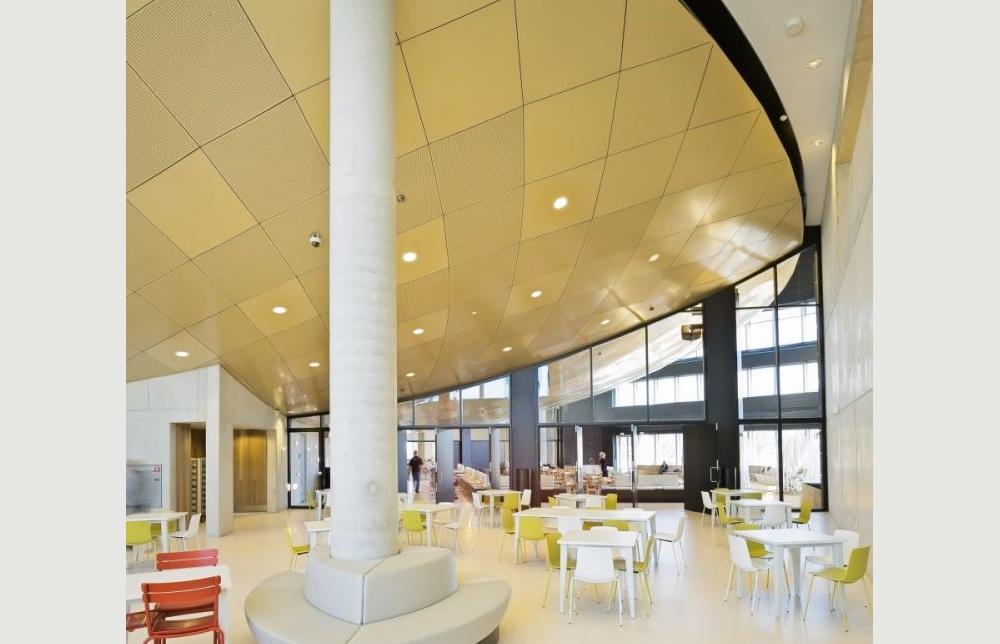 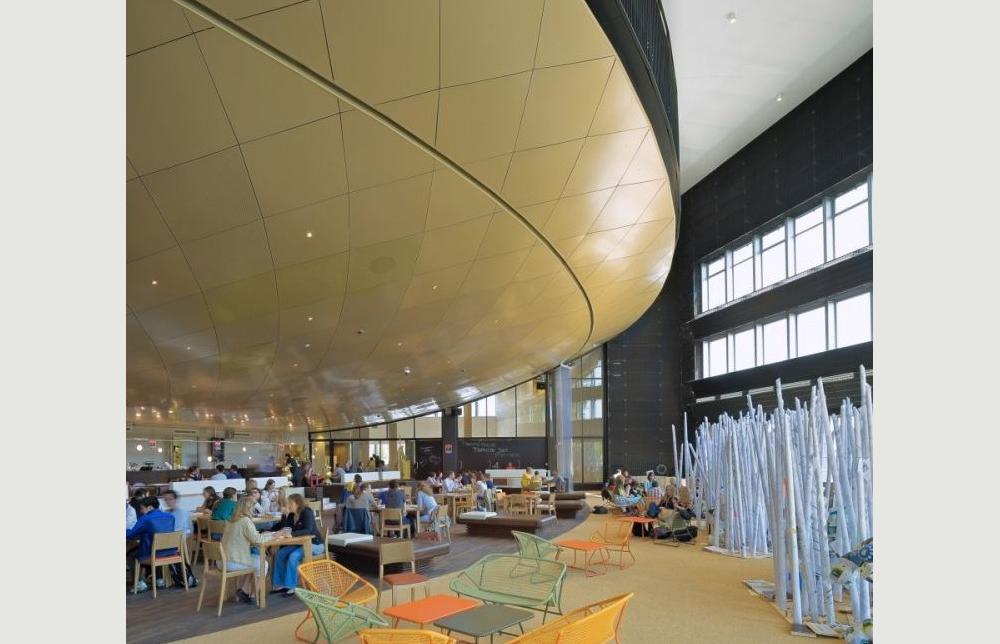 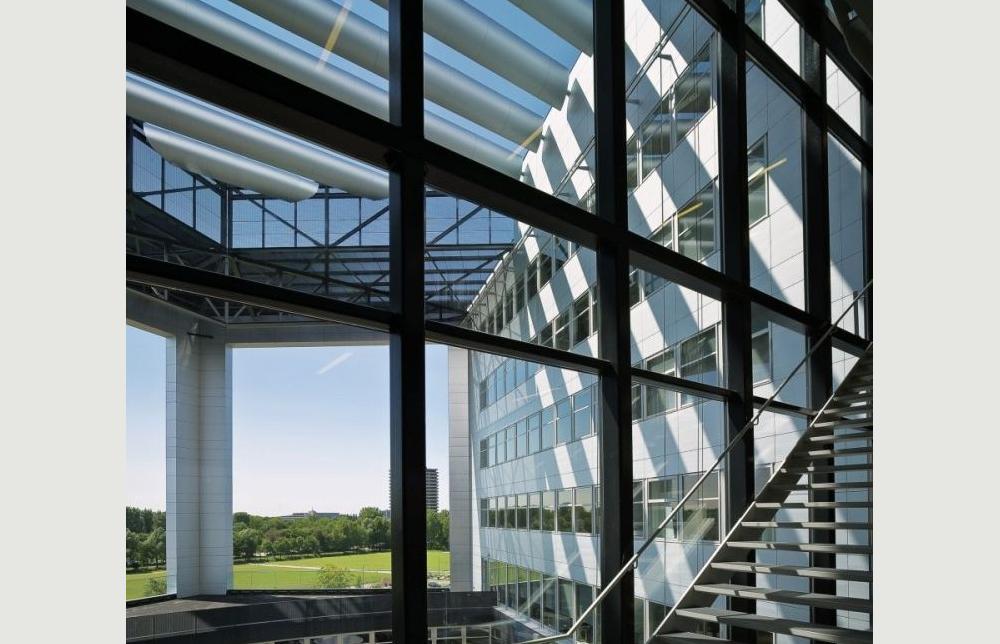 Queen Máxima has opened the Orion education building on 2 September 2013. This remarkable, pentagonal building, with its facades of metal-coated glass (Low Emissivity Glass), is one of the landmark buildings on the Wageningen UR campus. By choosing a rational structure and the best possible integrated technology, Ector Hoogstad Architecten has been able to create a congenial learning and working environment dedicated to the abundance of daylight and spatial surprises within a modest budget. Moreover, Orion is the most sustainable of all the WUR buildings.

Wageningen UR occupies a special place in the Dutch university landscape. The university is not composed of faculties but research institutes that offer education. Apart from the institute buildings, there are two education buildings, which were explicitly built as central student facilities. Orion entered into use shortly before the summer of 2013 and, in addition to Forum, is the second education building on the campus to be completed. The building offers space for all the necessary forms of education and work such as auditoria for lectures, class rooms, laboratories for biology and physics practical work, inorganic chemistry laboratories, group work spaces and spaces for individual study. Various catering facilities make the building one of the campus’s living rooms.

The layout of this compactly constructed building has a rational basis. There is a large student restaurant on the ground floor with a café that can stay open beyond the normal teaching hours. The auditoria are situated on the easily and rapidly accessible first floor due to the expected peaks in the flow of students. The practice rooms with the most fume hoods are high up in the building, directly under the air treatment units on the roof, due to the great need for such equipment.

Orion derives its characteristic form and structure from the large auditorium with seating for more than seven hundred people. The mass of the building with its pentagonal plan has a niche built in on the higher floors in order to keep the whole area of the auditorium free of supporting columns. Flexibility is an important motif in the design. Ector Hoogstad Architecten found an extraordinary solution for the large auditorium. In the time it takes to have lunch, the fan-shaped hall can be split into two, three or six halls by means of removable walls. This makes it possible to respond to the need for larger or smaller lecture halls as this changes throughout the academic year.

Wageningen UR presents itself as the life sciences university and it therefore goes without saying that it attaches great importance to sustainability. This has been interpreted in Orion’s design in minimum energy use, among other ways. The design of the façade, the orientation of the building and the placing of the spaces are aimed at making maximum use of the daylight and the exclusion of undesired heat. An atrium has been constructed under the large auditorium that serves as a climate buffer for the surrounding spaces and functions as a conservatory for the restaurant and café. Above the auditorium, there is a fivestorey patio with a slatted roof that keeps the surrounding practice rooms out of the direct sunlight and which also creates space for a roof garden with a large outdoor terrace, which will both be laid out this autumn. The most intensively used spaces are placed by the facades with the least xposure to sunlight, on the north side and around the patio. Lesser-used spaces, where students and staff spend a inimum of time, such as the refrigerators, have even been built completely without windows

Ector Hoogstad Architecten, together with the consultants, devised the integrated solutions that support the compact nature of the building and contribute to the spatial quality. All piping, under-floor heating and acoustic material have been integrated into an innovative flooring system that is sufficiently thin to allow a large height of open space to be created with a limited number of floors.