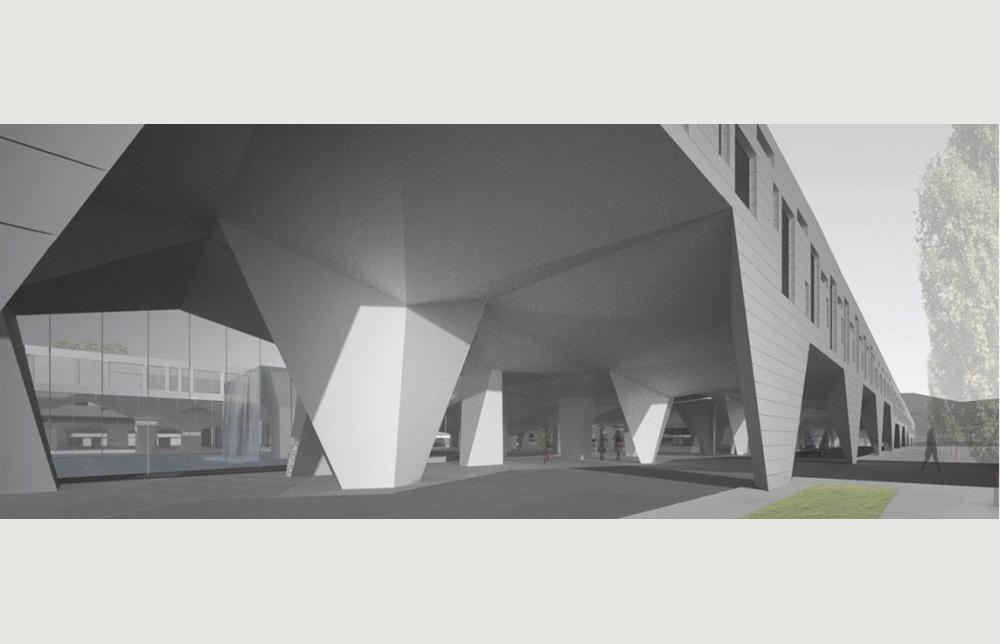 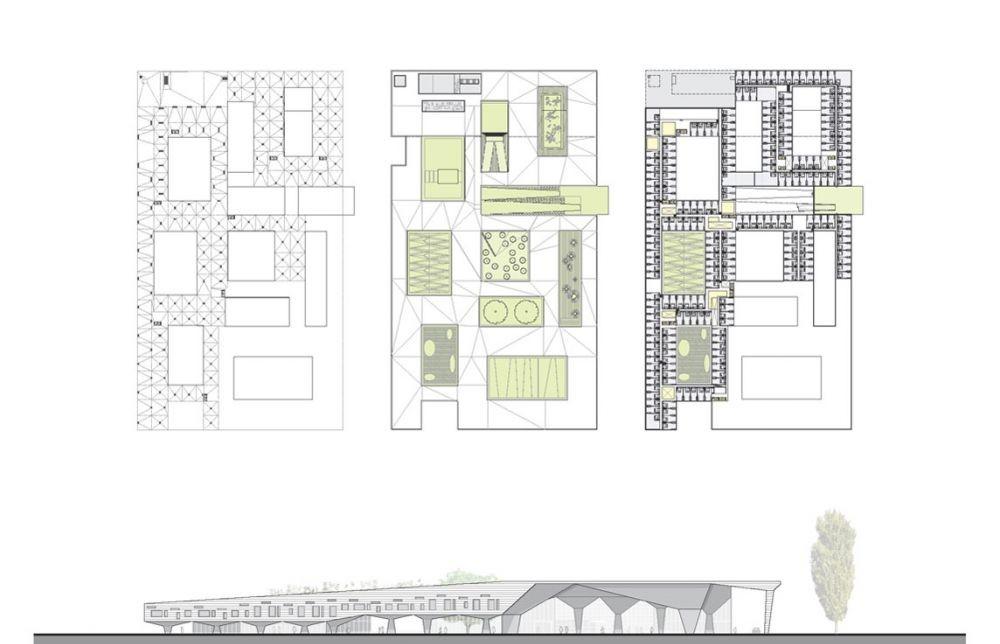 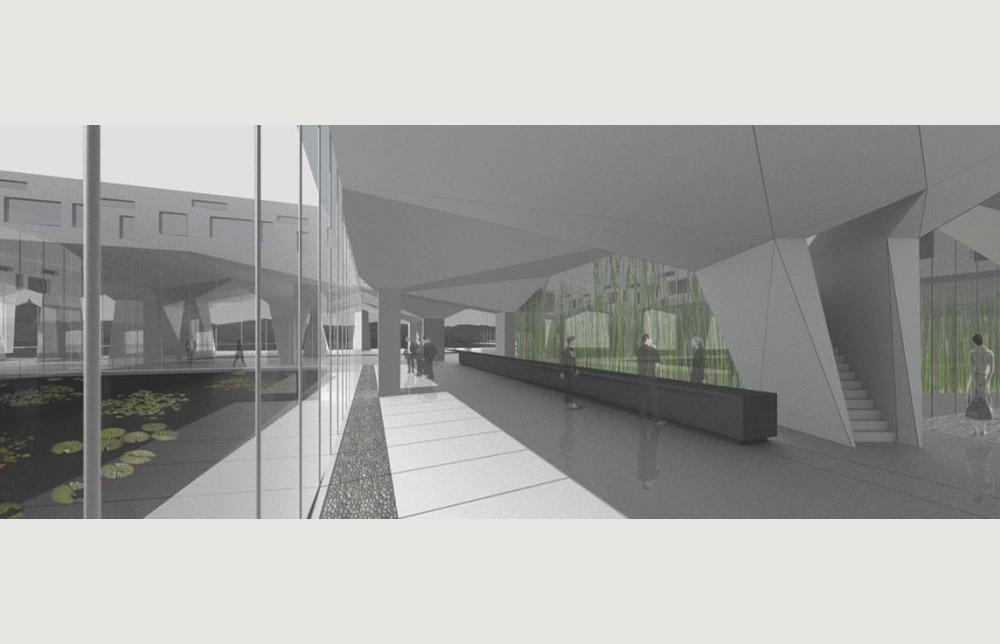 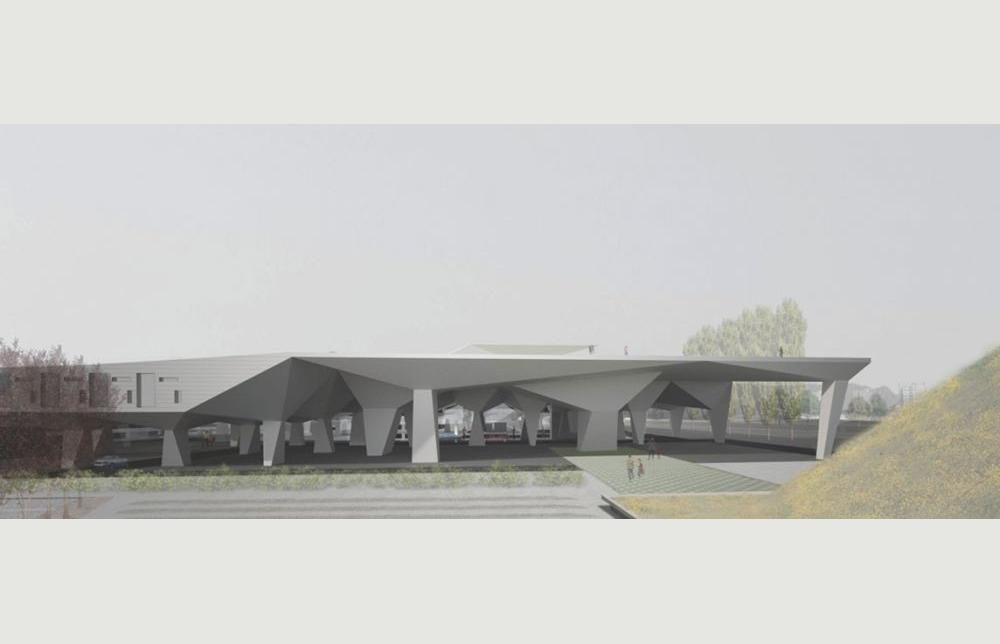 The Ordos Hotel finds itself at an important location in the heart of the newly proposed city. Located
between the cultural core and the landscaped greens of the golf club, our proposal draws from both urban
and landscape references to create a new landmark within the city.
The most important guideline restricts the height of the building to three levels, thus prohibiting towers,
and other such compact typologies. Our proposal sets out to develop a strategy that takes advantage of
this restriction to create an innovative building type out of the flat and horizontal type, a mat building
organized on three levels: a service basement, a public ground level, and a second floor composed of
hotel rooms. The success of the scheme can be gauged on its relative compactness, as a variety of
courtyards are aggregated together to create a dense village; each courtyard, in turn, is planted with its
own flora, and each contains a theme that is programmatically driven. As such, each bedroom gains it
light and air from a particular court, while it also gains its identity from the association to its landscape.
The landscapes vary– from water to moss, from a shaded tree to native grasslands, or from bamboo to
rock garden 150; each setting the mood for different activities, some more contemplative, while other more
saturated with activity.
The building is oriented parallel to the property line along the golf course, placing premium rooms directly
on the fairways. This places the orthogonal geometry of the plan oblique to the south; responding to this,
we propose to angle the building along its oblique axis, producing two effects: first to maximize the
relationship of each room to the southern exposure, but second and more importantly to offer the majority
of rooms, deep within the plan, an equally provocative view towards the greens and the landscape
towards the east. With the tip of the building on the oblique axis, the southeastern corner of the building
touches the ground, extending the landscape into and onto the building, while the northwestern corner of
the building gets raises three stories in the air to create a monumental portico for the entry of the building.
Thus, the public spaces of the building, its main lobby and concourse areas, begin with six meter height
spaces, and eventually diminish to nothing, as the building drops to the ground. For this reason, less
public programs, like meeting rooms, offices and other support programs take the lower ceiling areas,
taking appropriate advantage of the section of the building.
The blending of the landscape and the building produces an enigmatic new type for the city, a sort of new
geography for the site. Unlike a traditional building or landscape, this hybrid constructs a new terrain to
contain a variety of oases within courts, while also permitting some landscapes to leak out into the
Note: This form must be completed in its entirety, signed, dated and returned as a Word
or editable PDF document. Questions Concerns Email: projectsArchitypeMedia.com
neighboring views. Working with the local flora, the proposal takes advantage of the region to create
framed characteristic spaces, while offering an ecologically sound strategy to minimize waste, imports, or
unnecessary use of energy. The proposed 147;landscraper148; offers minimal excavation of earth, and even that
cut terrain is used to fill a newly proposed mound, a fabricated mountain adjacent to the main entry,
producing a visible skyline for the site. Extending the logic of efficiency, the sun is drawn into the courts,
and into the public concourse areas to produce passive heating strategies, as contained stone floors
create thermal mass which gain heat during the day while releasing it at night. Correspondingly, each
court has two primary orientations: bedrooms facing South-east and west, and the other bedrooms facing
north-east and west. Southern exposures are proposed to have a layer of screens, sun shades, and
protective elements to mitigate excessive heat gain in the summer, while northern exposure rooms are
more reduced in terms of elevational treatment while taking in southern light by way of skylights.
The spatial logic of the building is developed around the design of hotel rooms. Each pair of hotel rooms
operate as a structural coffer on top of a conventional mushroom column and canopy assembly. The
entire building, thus, is lifted atop a hypostyle of columns, while minimizing the depth of beams, as the
wall systems of the rooms themselves act as the beam system on top. The mushroom columns, in turn,
serve to characterize the main concourse spaces, deforming to programmatic requirements stairs, pools,
ramps, drainage, mechanical equipment or eccentric spans, while the overall slope of the building offers
a reflective ceiling plan that is animate, meaningful, and the generator of identity for the hotel. The idea of
the proposal then, is to develop an 145;integrated146; building type that merges structural concerns with that of
the environmental systems, program, and general organization.