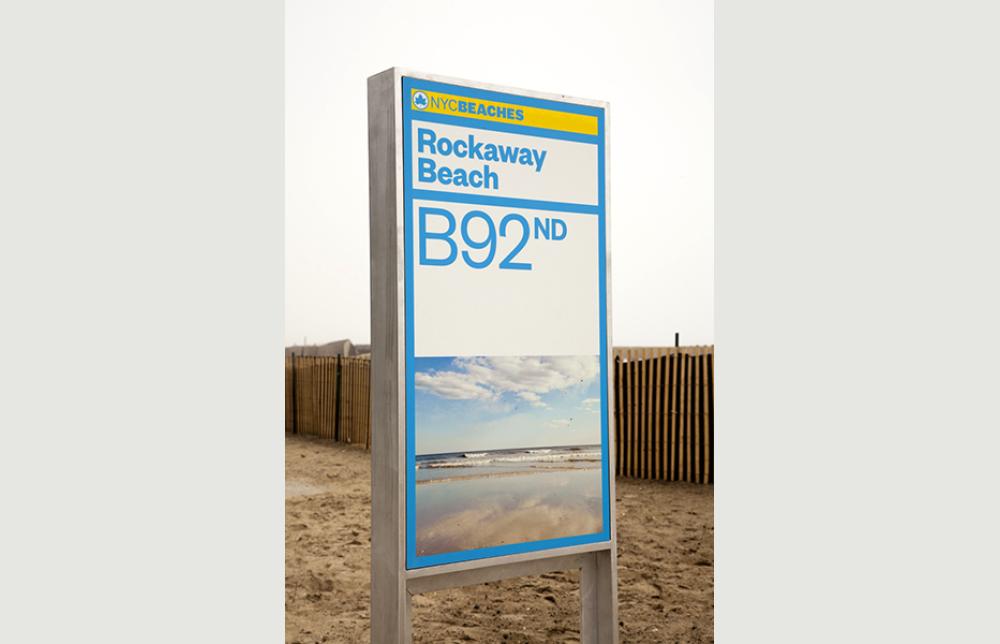 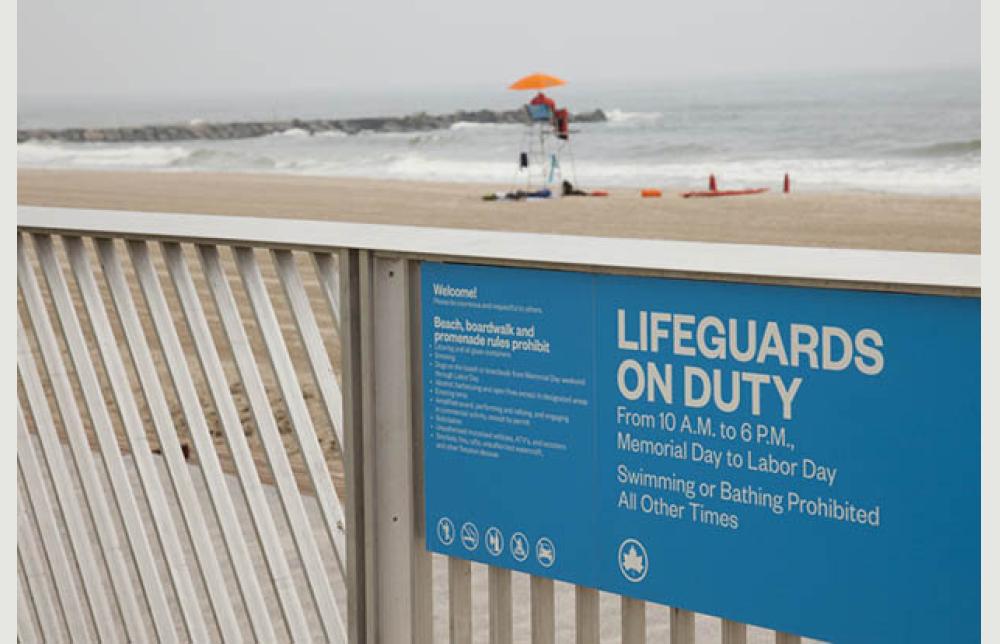 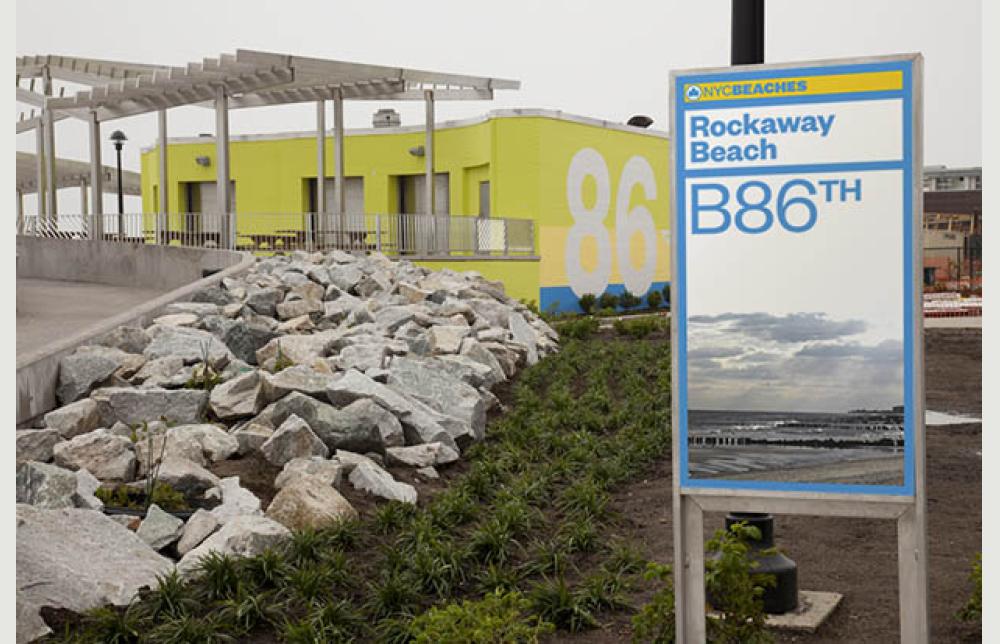 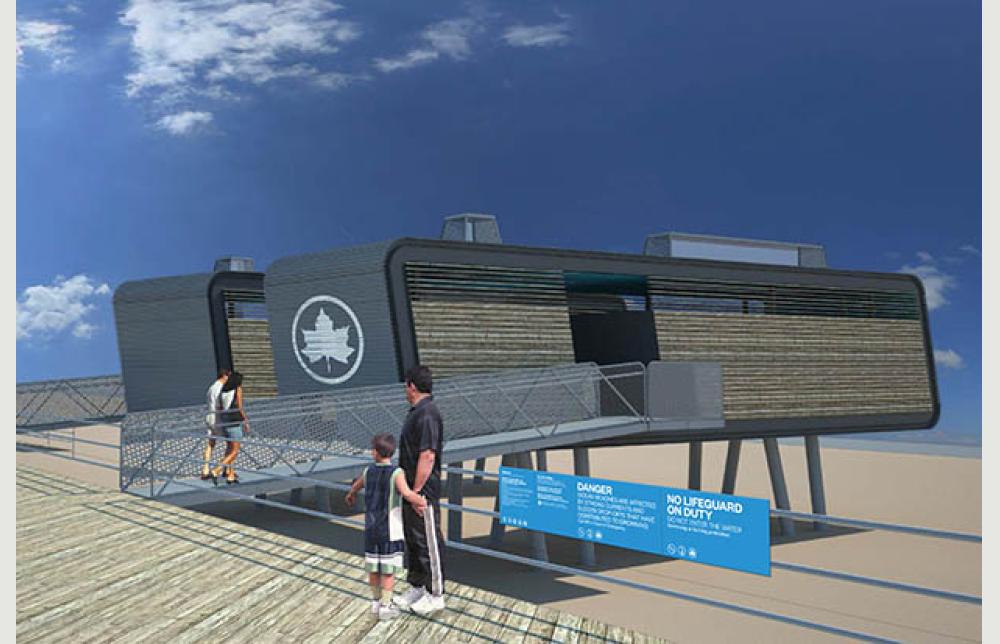 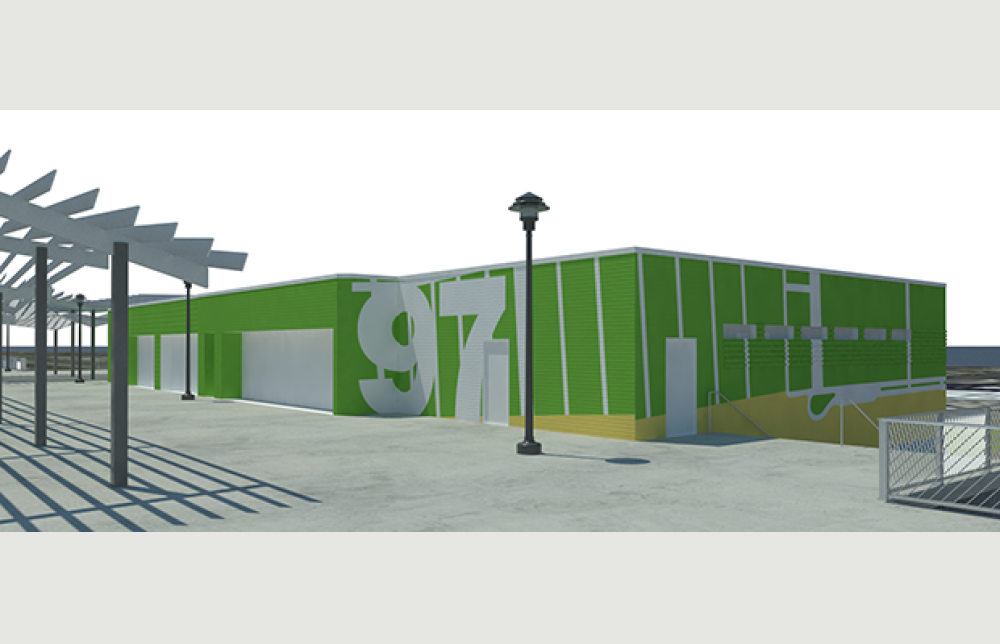 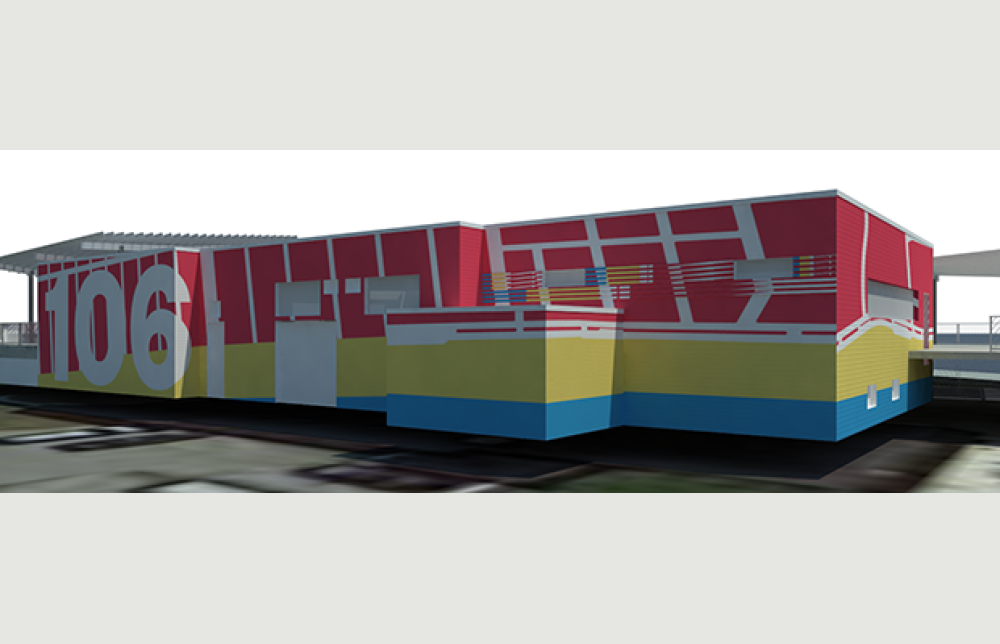 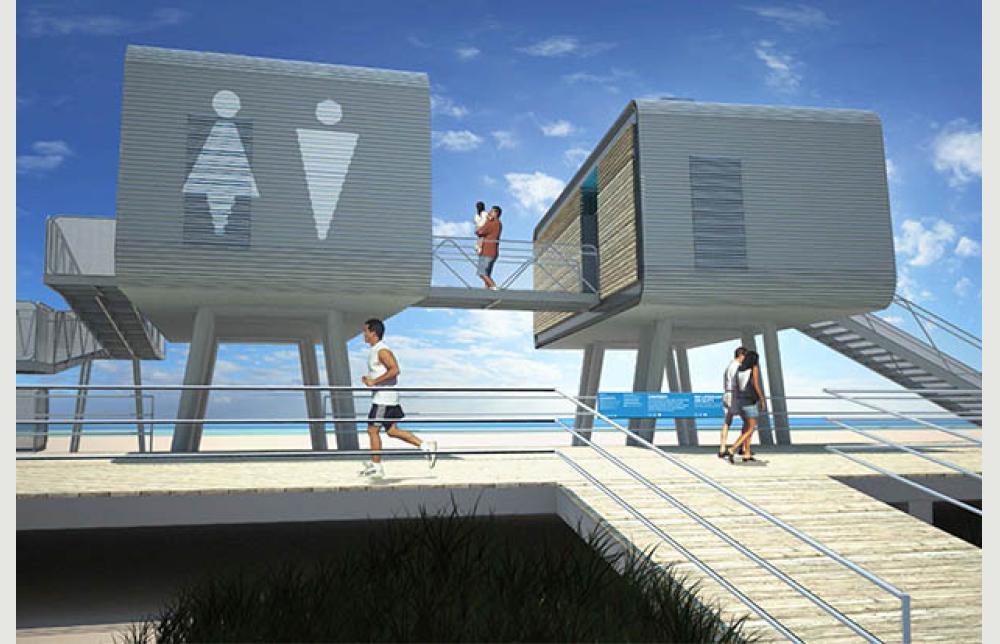 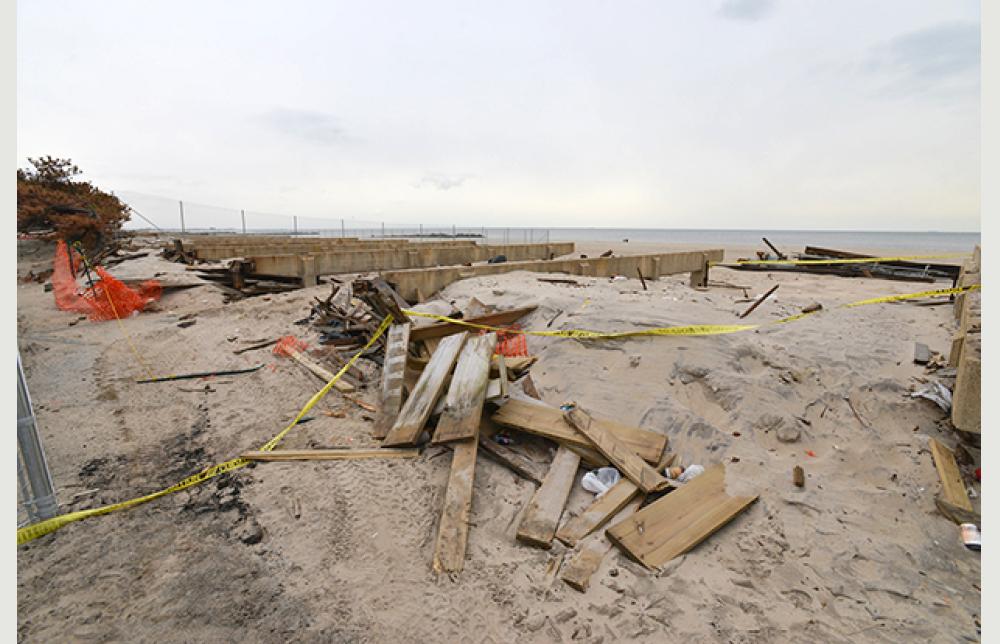 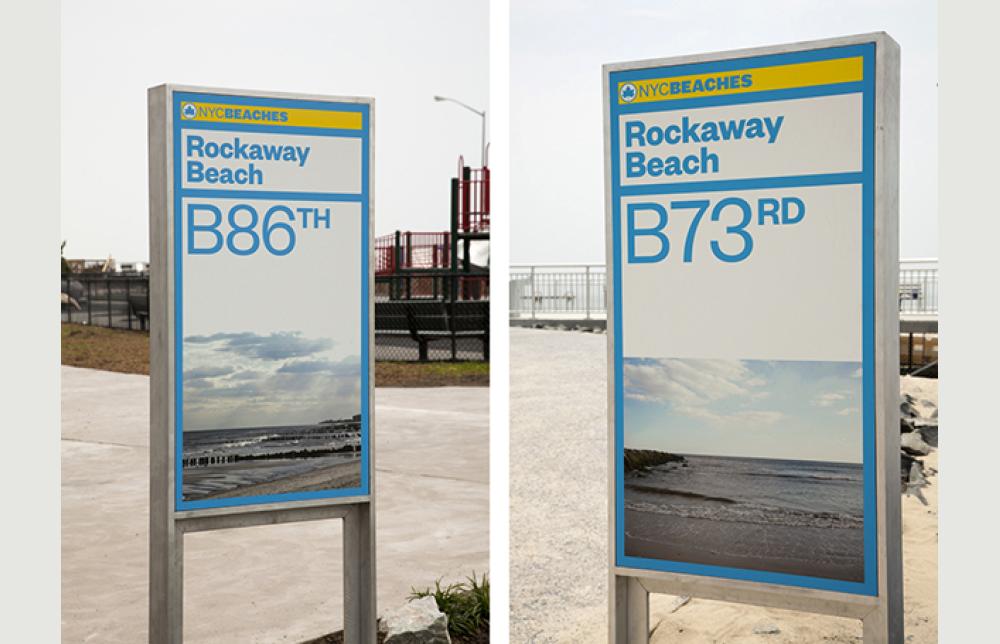 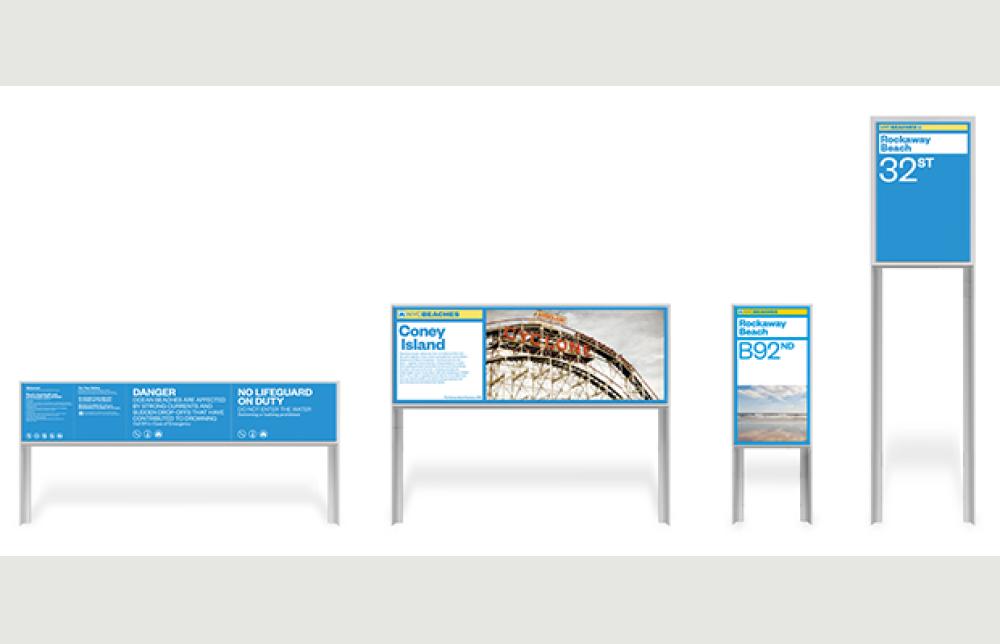 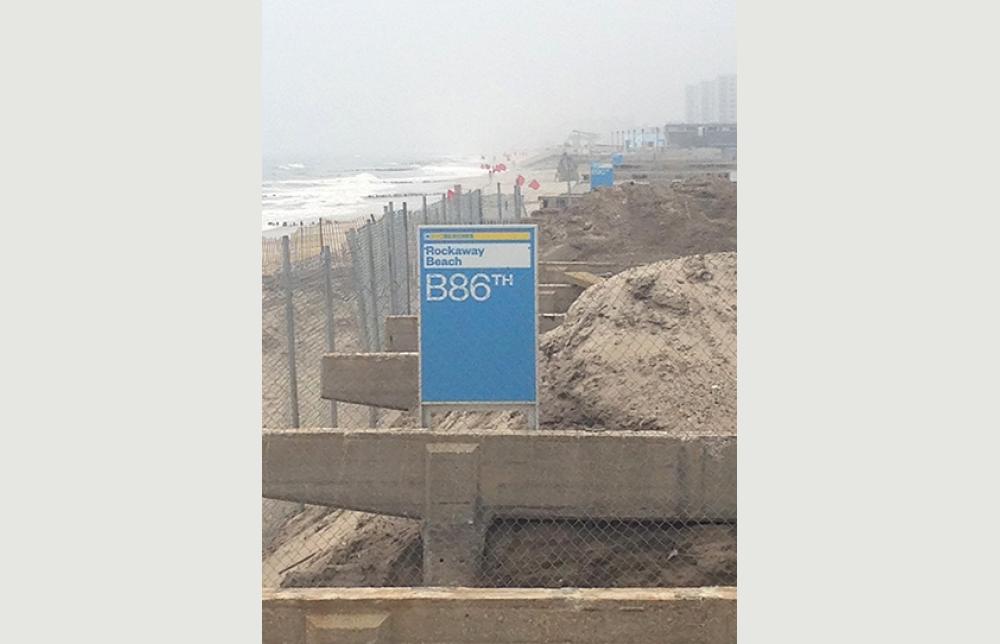 When Hurricane Sandy hit New York last October, the city’s 14 miles of beaches took the brunt of the storm, with boardwalk structures destroyed and millions of tons of sand displaced. Following an extraordinary effort by the Mayor’s Office, the NYC Department of Parks and Recreation, and the NYC Department of Design and Construction, the city’s eight public swimming beaches were reopened on Memorial Day, only seven months after being devastated by the storm.

As part of the restoration, Pentagram’s Paula Scher has created a program of signage and environmental graphics that welcome New Yorkers back to their beaches. Pentagram has worked on the project in collaboration with a team of architects and designers that includes McLaren Engineering Group, Garrison Architects, Sage and Coombe Architects, LTL Architects and Mathews Nielsen Landscape Architects.

The beaches are among New York’s most popular parks—over 21 million beachgoers visited them last year—and it was imperative that they be restored in time for the summer season, both for recreation and to demonstrate the region’s recovery from Sandy.

Scher wanted the signage to help create a sense of place and capture the charm and the romance of the beach. In shorefront neighborhoods like the Rockaways, beaches are the front yards and a point of pride for the community. The new beach identification signs each feature a photograph of the beach taken at the exact spot where the sign is located. The images face the street, and remind residents and visitors that whatever Sandy took away, the beauty of the beach remains.

For many New Yorkers, the beach is also the boardwalk, and the beachfront structures both hold a place in the popular imagination (“Under the Boardwalk”) and serve as a kind of gateway or structural transition from the city streets to the beach and the ocean. Where possible, the boardwalks damaged by Sandy have been towed back into place and repaired. Others may eventually be replaced in more sustainable forms, or not at all. For Scher and her designers, a major challenge of the project was how to get people to the beach, with or without the familiar structure of the boardwalk to guide them.

The identification signs are accompanied by highly visible marker signs that run along the shoreline. At Rockaway Beach the existing boardwalk was located at street level (with stairs down to the sand) and visitors used street signs to see where they were. Much of this boardwalk was destroyed, and the ruined sections left massive stanchions that have been repurposed as supports for a seawall made of sand that will help protect the shore. (The landscape architecture is by Mathews Nielsen.) The new markers are affixed to the stanchions, so visitors can easily locate where they are in relation to the streets on the other side of the dunes. The stanchions have been painted bright yellow at access points through the wall, so visitors can find the entry and exit points up and down the beach.

Installation view of highly visible marker signs that can be seen up and down the beach. The signs are being affixed to the stanchions of the destroyed boardwalk, which have been repurposed as supports for a seawall to protect the shore.

Scher previously developed the identity and signage standards for the New York City Department of Parks and Recreation, which manages and maintains the city’s beaches. The beaches are their own unique experience, and Scher has branded NYC Beaches as its own identifiable entity, endorsed with the NYC Parks logo. The identity uses different fonts, Founders Grotesk and Maple, and a color system that uses bright blue and yellow in place of the green of Parks. (No one wants to see green at the beach.) Regulatory signage follows the system designed for the parks, replacing the existing jumble of signs with a cohesive set of panels, here in blue. The beach signs feature elegant railing designed by Sage and Coombe.

The designers also created environmental graphics for the “pods,” a series of distinctive modular steel structures designed by Garrison Architects that punctuate the beaches and contain comfort stations, lifeguard stations, and offices for Parks Enforcement Patrol (PEP) and maintenance and operations staff. The structures are elevated to avoid future flooding and marked with supersized graphics of the NYC Parks logo and restroom icons. At Rockaway Beach, four temporary concrete “islands” with seating areas and lights have been constructed at the boardwalk junctures of Beach 86th, 97th, 106th and 116th Streets. The exteriors of the buildings have been painted with supergraphics of the street numbers and bright, colorful maps of the surrounding area.

The program is currently being implemented at Rockaway Beach in Queens; Orchard Beach in the Bronx; Coney Island Beach, Brighton Beach and Manhattan Beaches in Brooklyn; and Midland, Wolfe’s Pond, Cedar Grove and South Beaches in Staten Island.