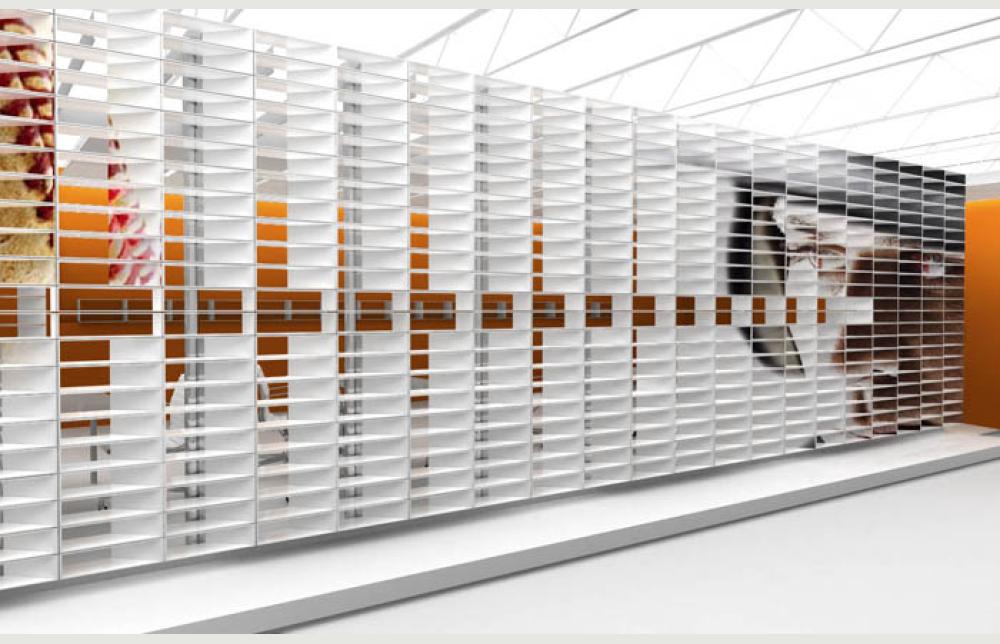 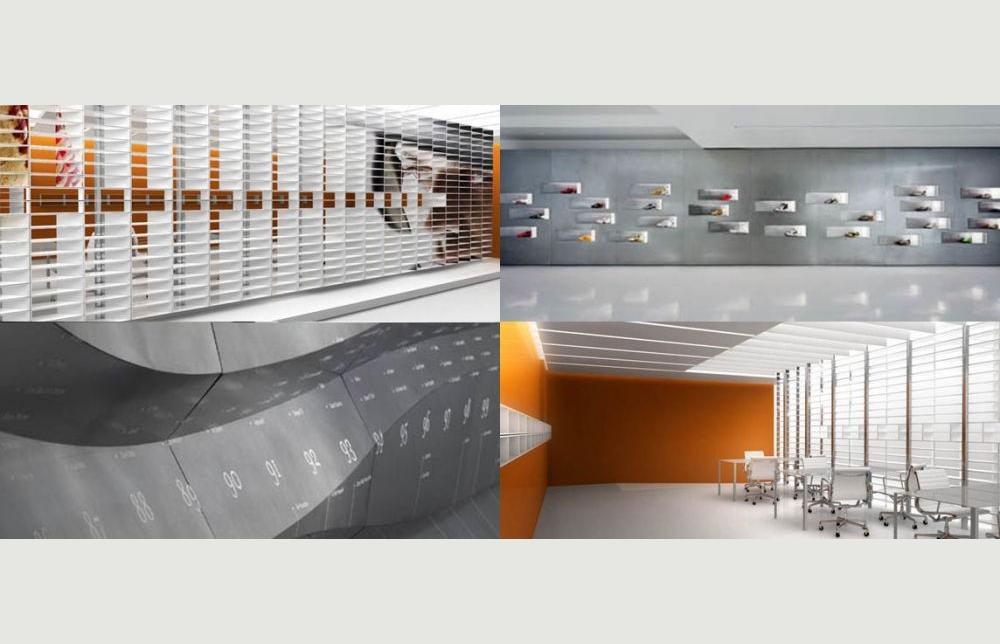 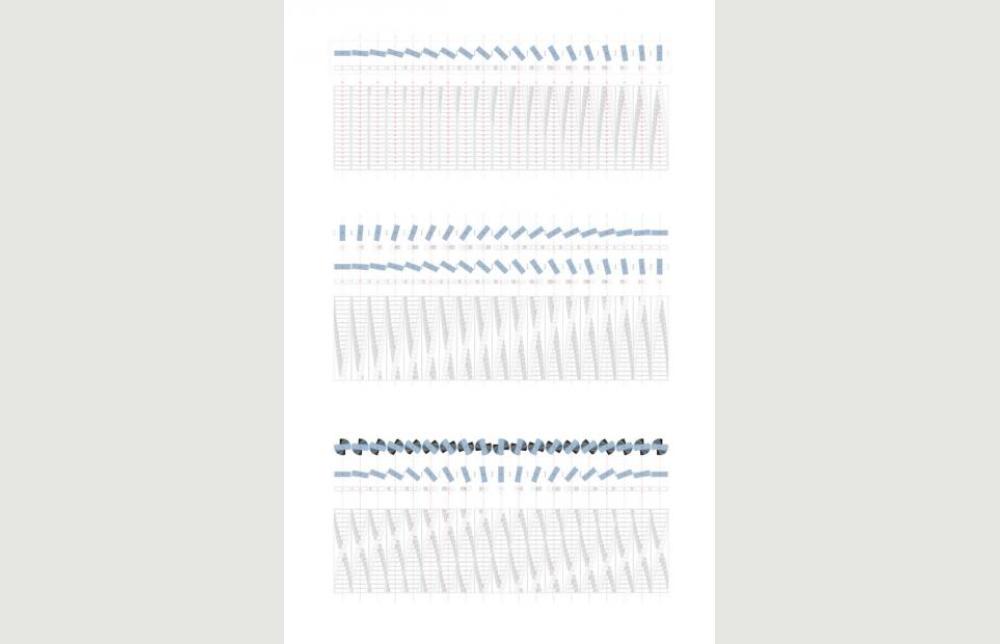 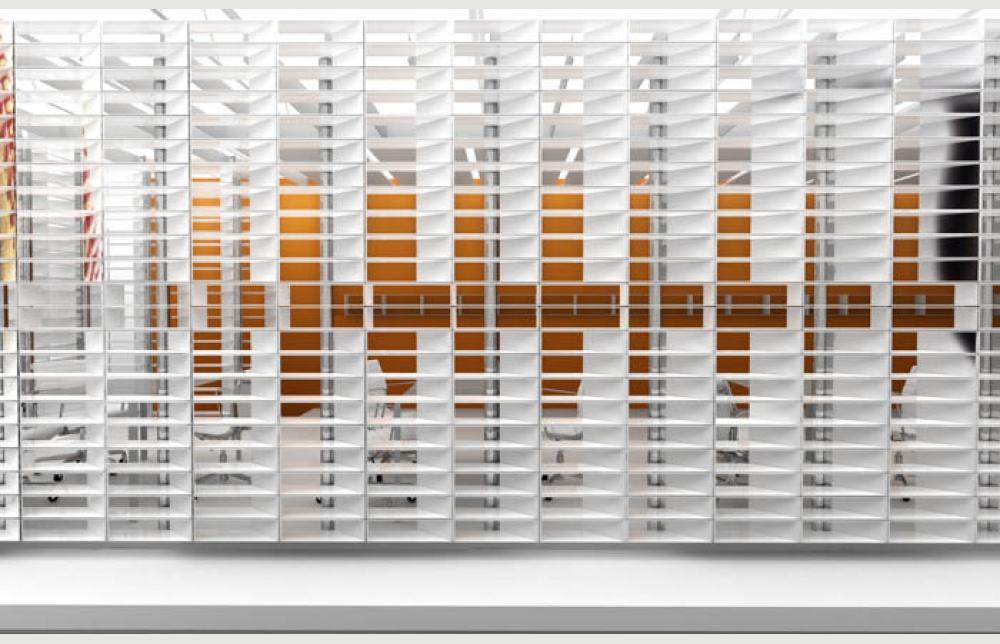 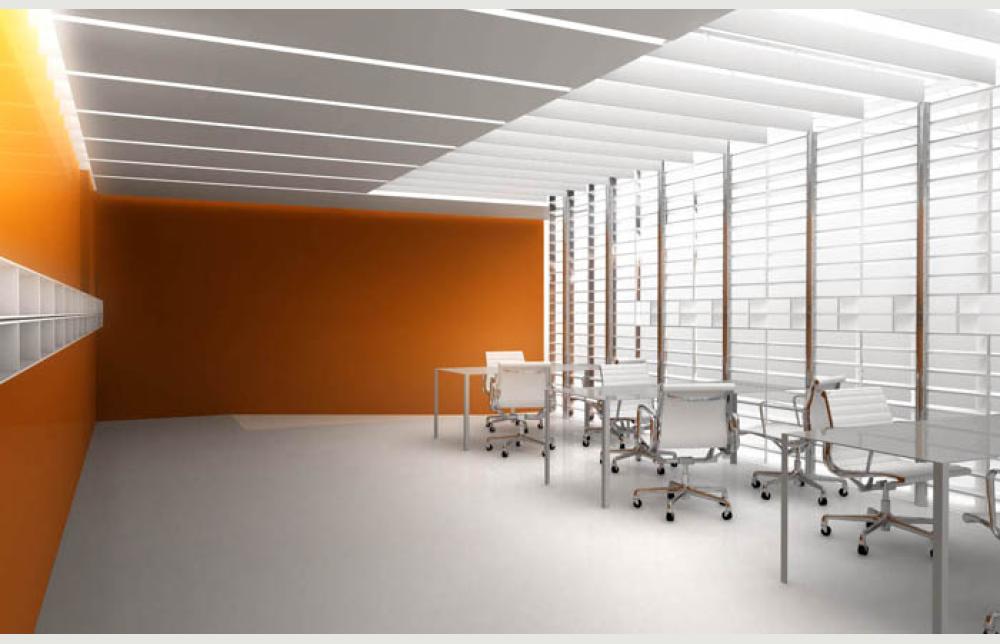 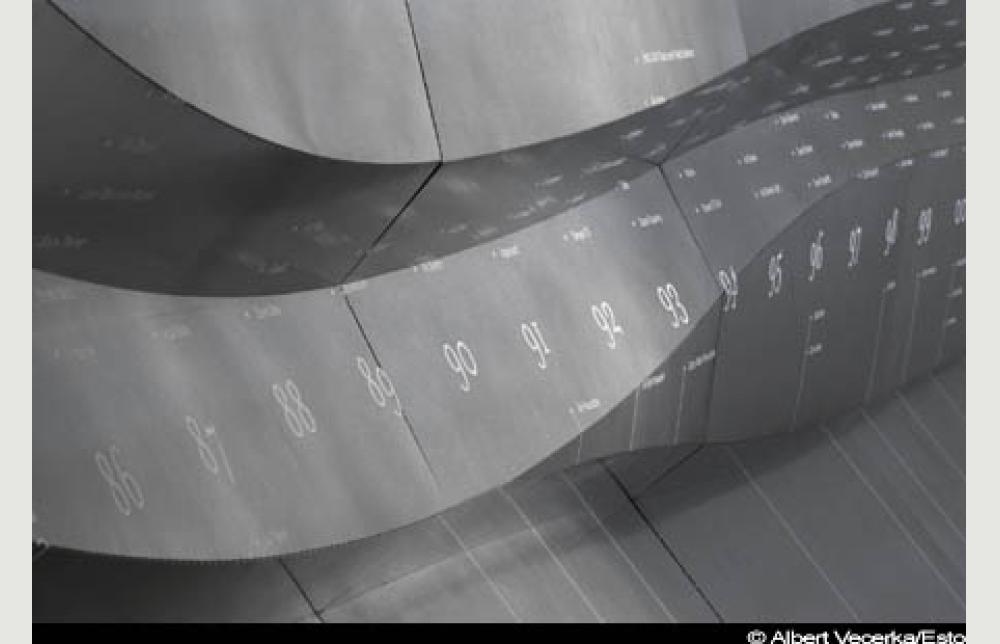 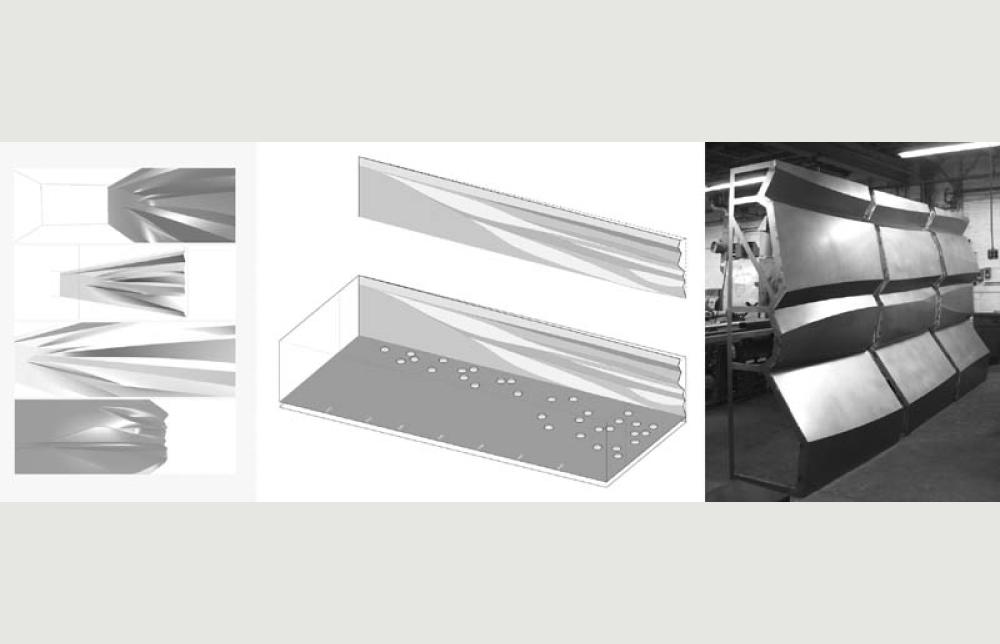 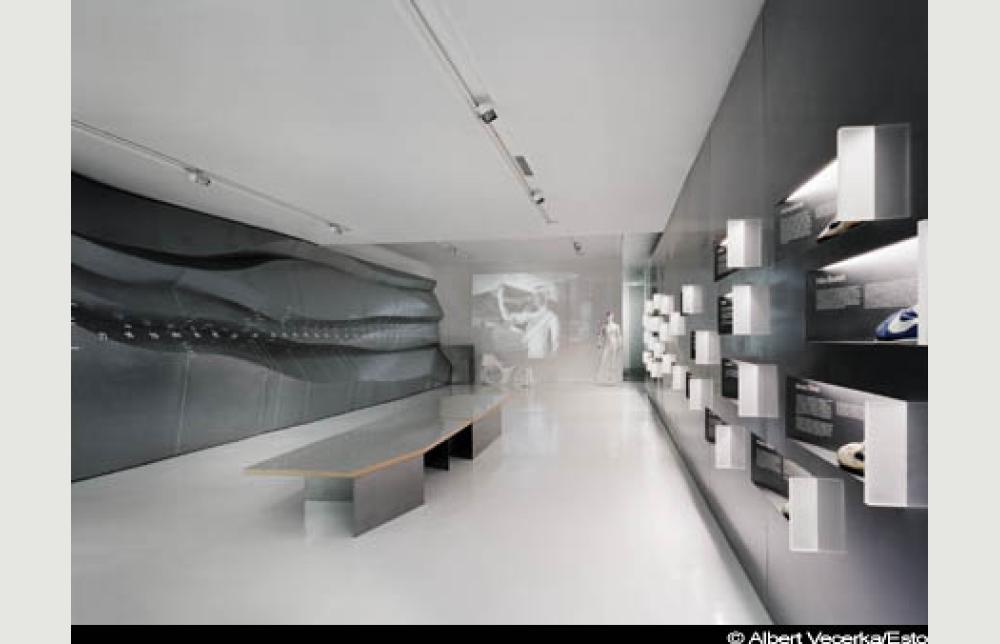 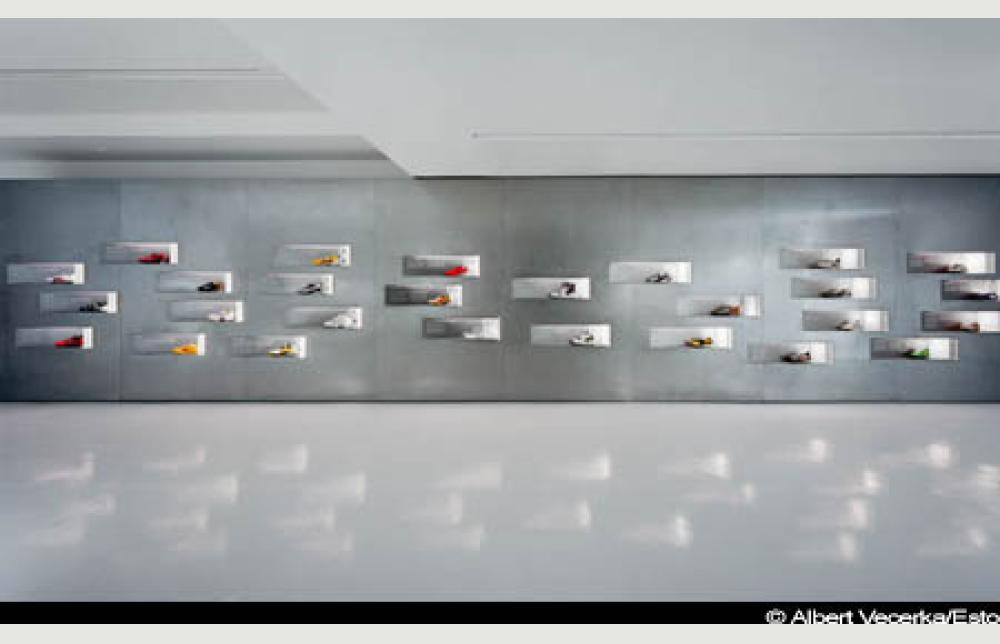 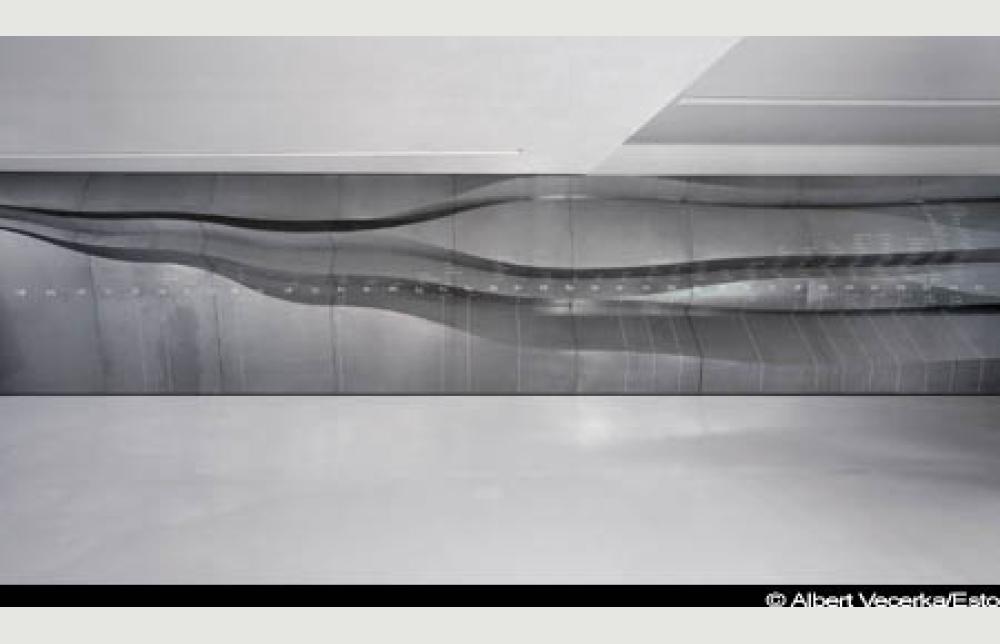 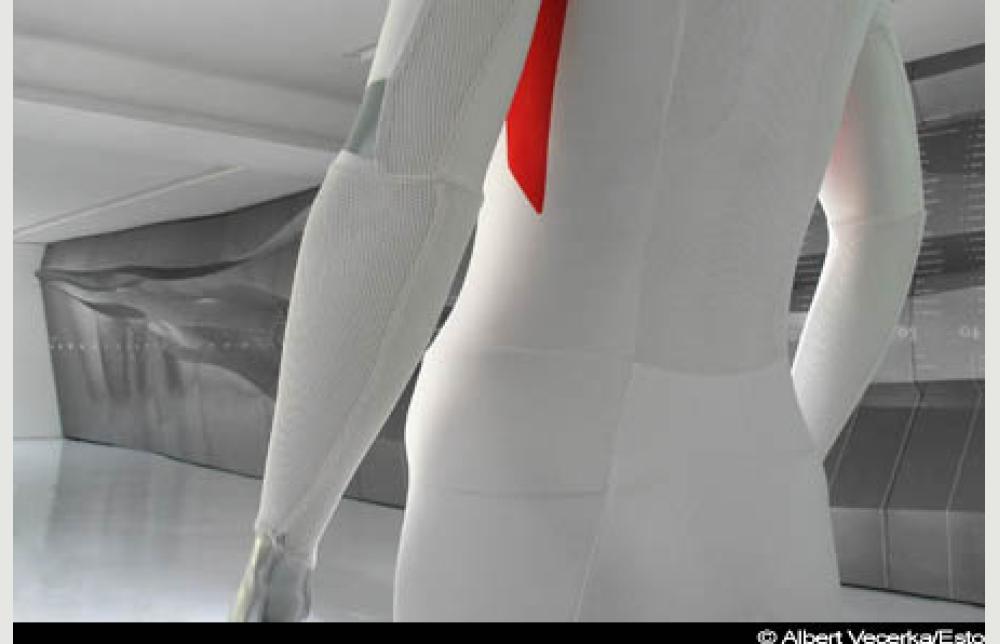 Nike Vision
Nike Vision is designed as a traveling exhibition and sales booth for Nike146;s performance eye-wear. As an itinerant booth, it is a site-less structure, self-supporting both structurally and spatially. Likely to be placed in busy public environments, the booth is designed neither to out-shout its eventual context, nor to hide its wares in a hermetic shell. Instead, architectonic presence comes from the use of a consistent building block 150; the eyewear display box 150; to serve three functions: display, structure, and enclosure. The boxes mediate the scale difference between the multiple small objects eyeglasses on display, and the actual habitable space, while providing each object with its own visual and physical container 150; one of the central challenges of the design. The repetitive form allows the pavilion to be read simultaneously as one enclosure and many.
In a further effort to toy with one146;s visual perception of the booth, LED distorted the open 147;building block148; elements into parallelograms, so that from certain angles the enclosure appears quite solid, and from others, entirely open. Portions of the vertical surfaces are printed with imagery, visible only from predetermined vantage-points, and disintegrating as one146;s perspective changes. All of this serves to engage passersby for longer than just a single glance, the small interior space unfolding and shifting continually as one walks around and through it. Colored glass or graphic inserts can also be placed within the open display cases, to enhance or mask graphics on the back wall of the pavilion interior.
Finally, the building block approach also facilitates rapid assembly, disassembly, and transportation of the whole structure, while repetition of a small number of repetitive elements keeps production costs low.

Nike Genealogy of Speed
This installation reflects 40 years of Nike146;s efforts to make athletes go faster. The challenge was to communicate the varied lineages of Nike product development, while evoking the intangible goal of speed. The resulting environment is shaped by three factors: speed the 147;cause148;, the artifacts being exhibited the 147;effect148;, and the developmental timeline that relates the two through the years. Rather than trying literally to build speed in a static construction, the designers examined the secondary effects of speed, such as the Doppler and Bernoulli Effects, sonic booms and Lorentz transformations, in search of the physical shape of speed. New computational and fabrication techniques were used to produce an environment which embodies the characteristics of the exhibited design artifacts – innovative use of materials, minimal weight, integration of different systems in a unified whole.
A 147;family tree148; of Nike146;s design lineage became the graphic generator of three-dimensional form, as chronological vectors are translated into the language innate to the topology of bent steel. The result is a flowing, three-dimensional surface, simultaneously light, tactile, emotive and informative. Innovative algorithms were used to predict the deformation of the steel surface, which was laser-perforated, and fabricated with no welding. A time-line stretches across the surface, registering the highlights of Nike design, the products of which are displayed set into the opposing steel plane. On this flat wall, iconic shoes rest in brightly lit niches, laser-cut into the flat steel surface which reflects and contrasts with the movement across the room. As suggested by the red shift Doppler Effect, the geometry of the niches gives a wholly different impression when coming or going. On entering the space, or examining the shoes from early in the genealogy, one sees only the glowing fins projecting from the intakes housing later products. When looking back from the recent products toward the past, however, all the designs which have led to this place in time are visible.