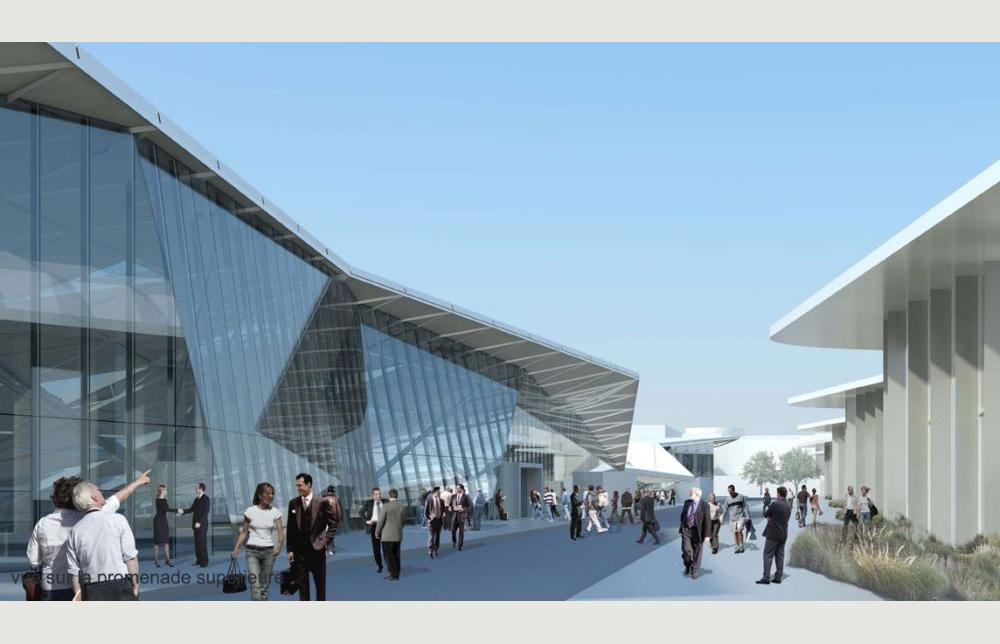 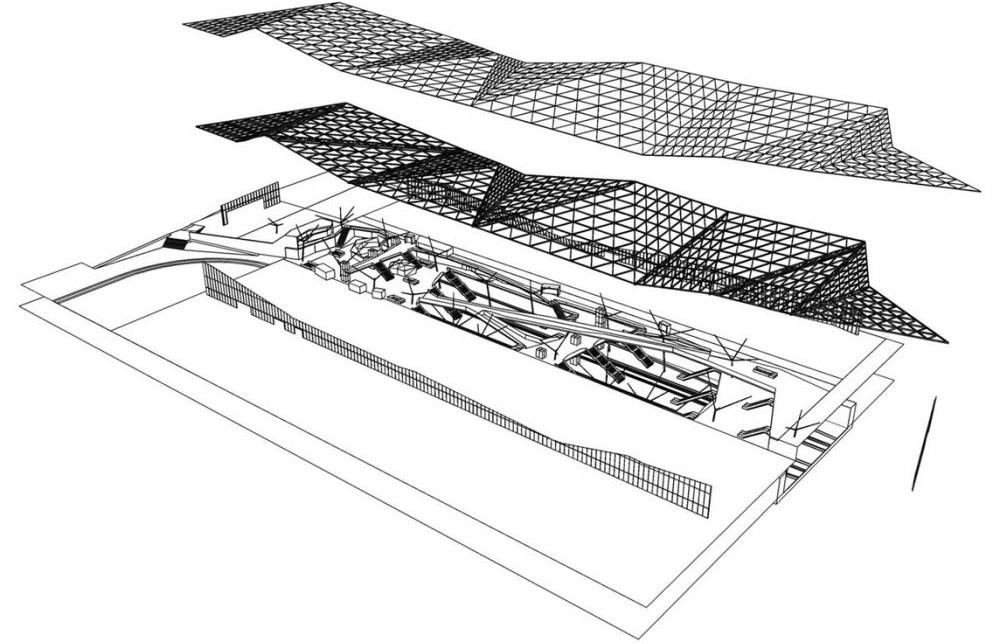 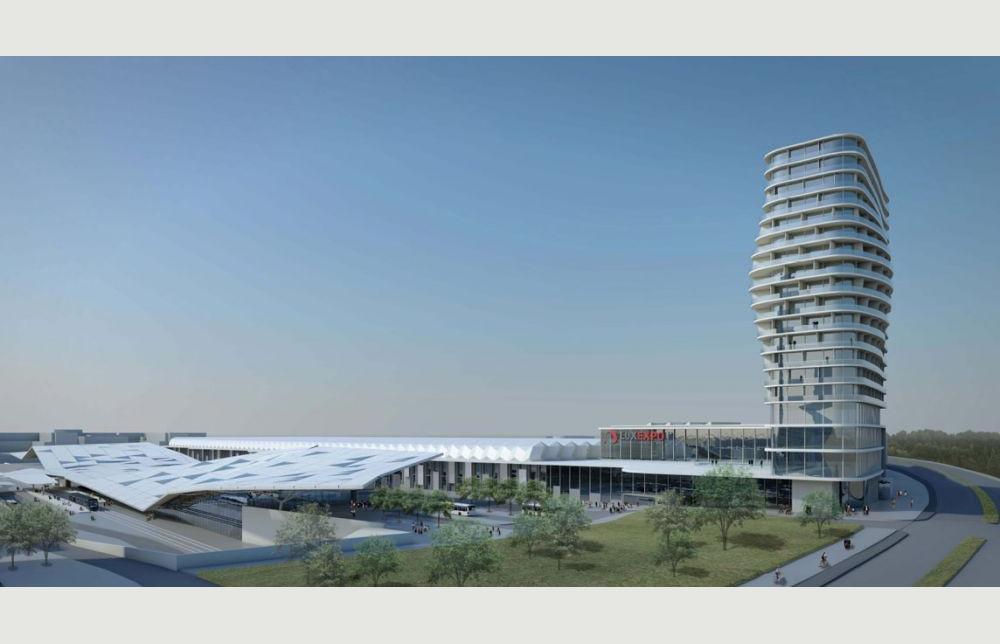 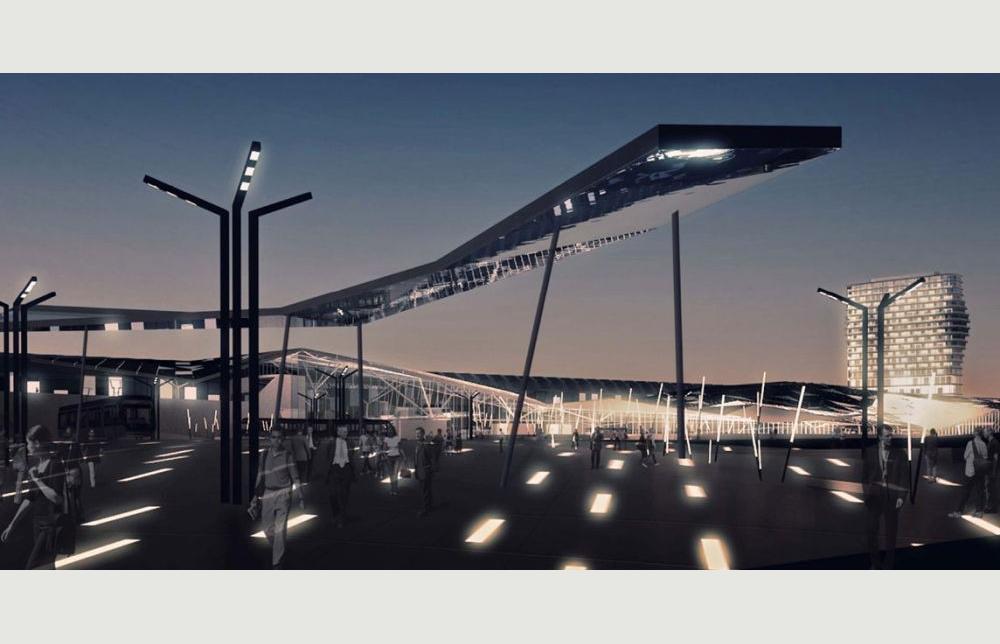 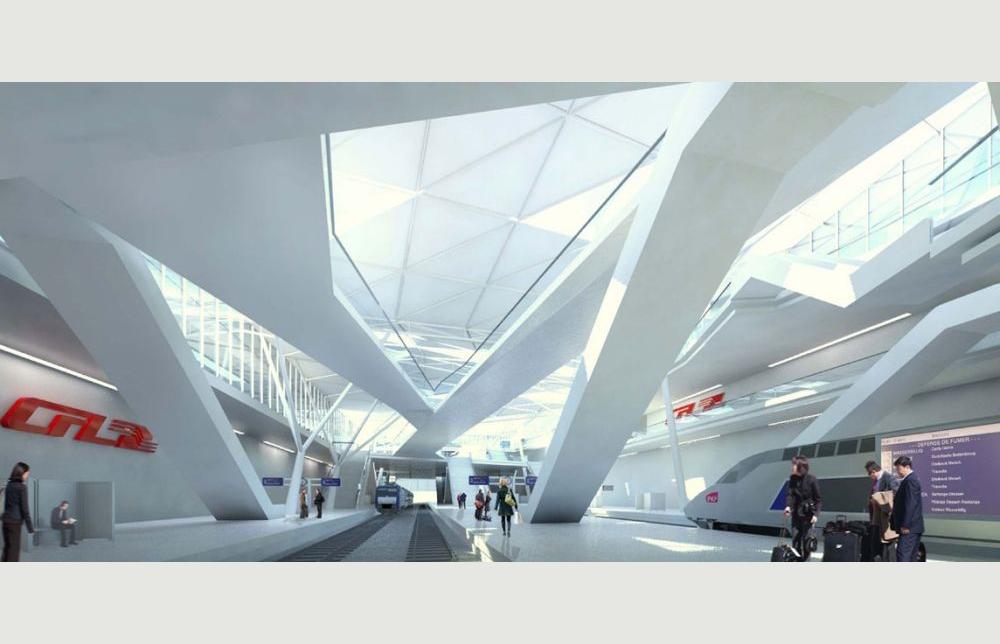 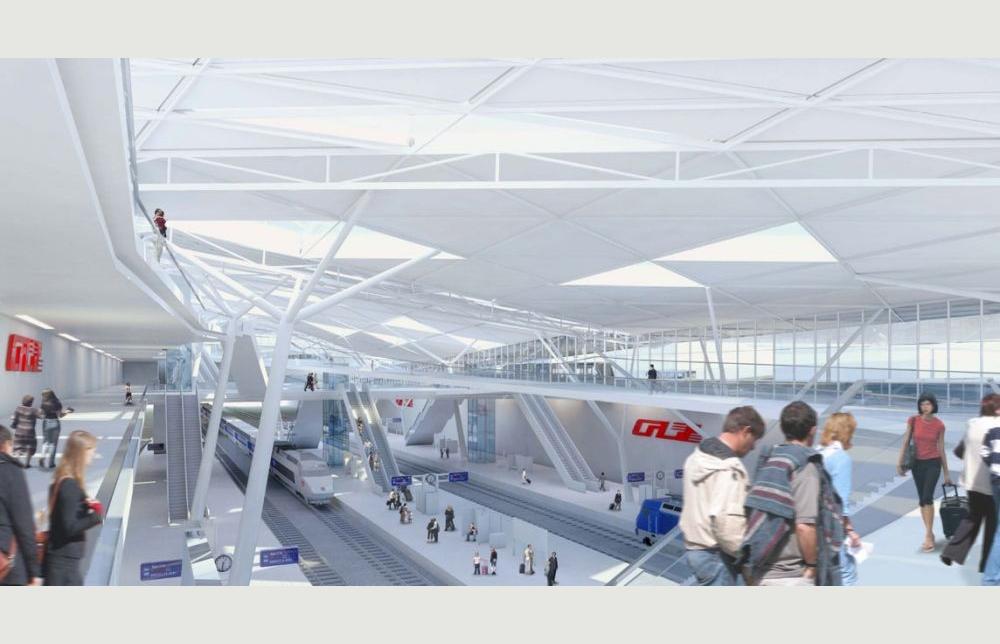 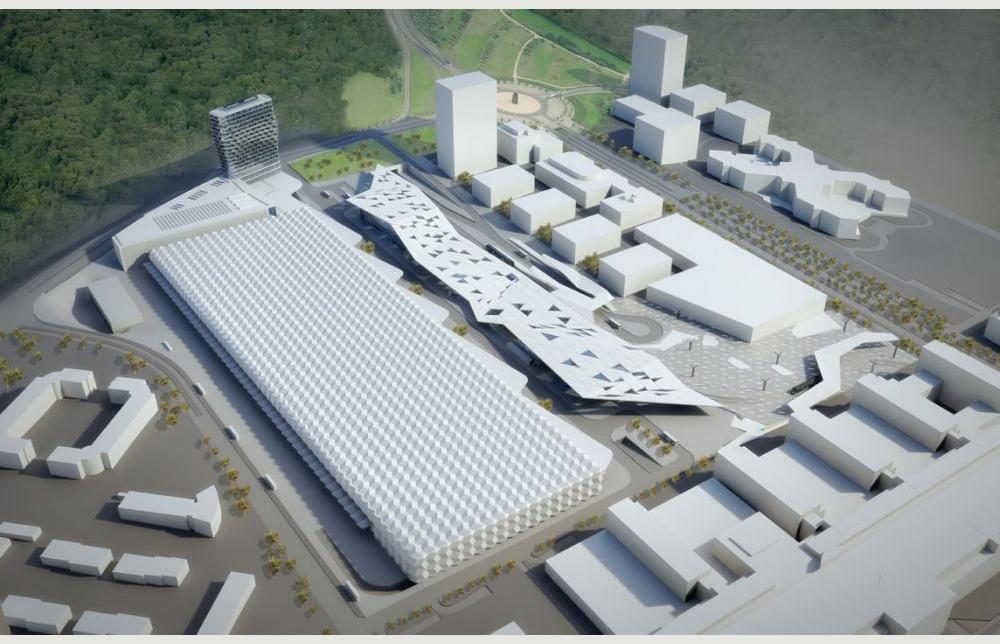 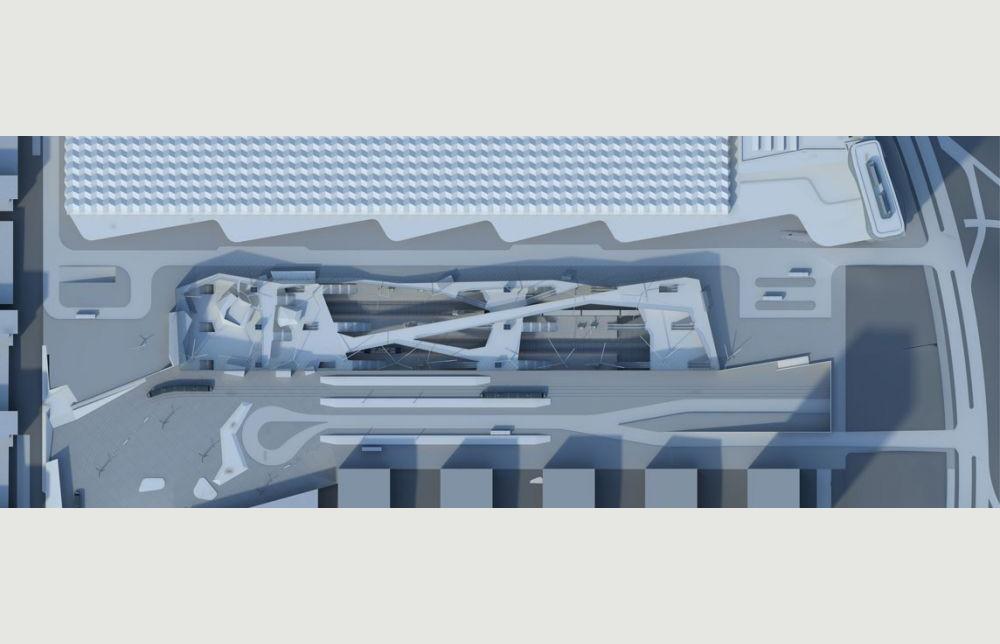 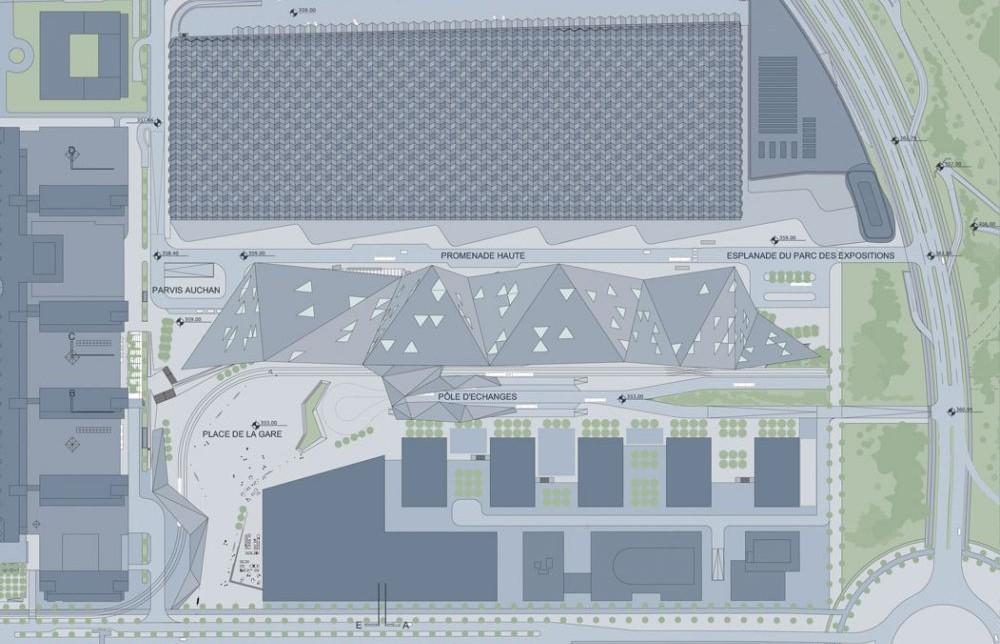 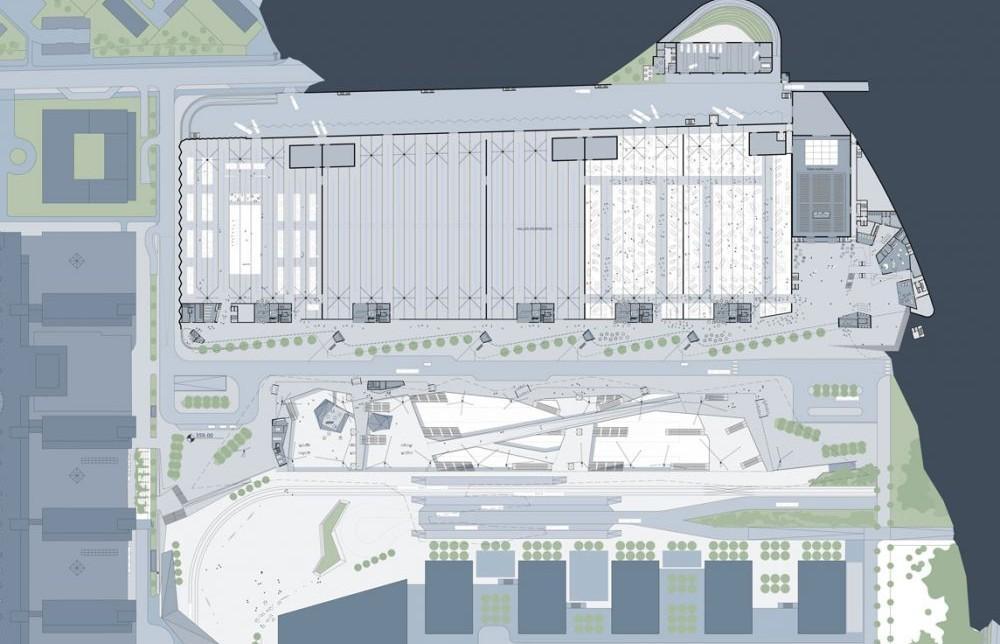 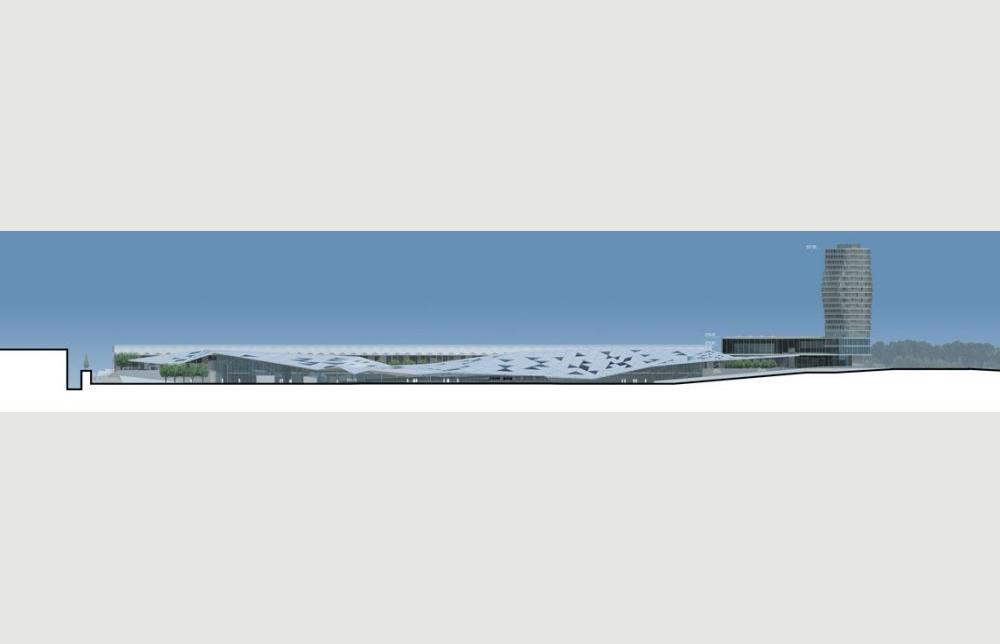 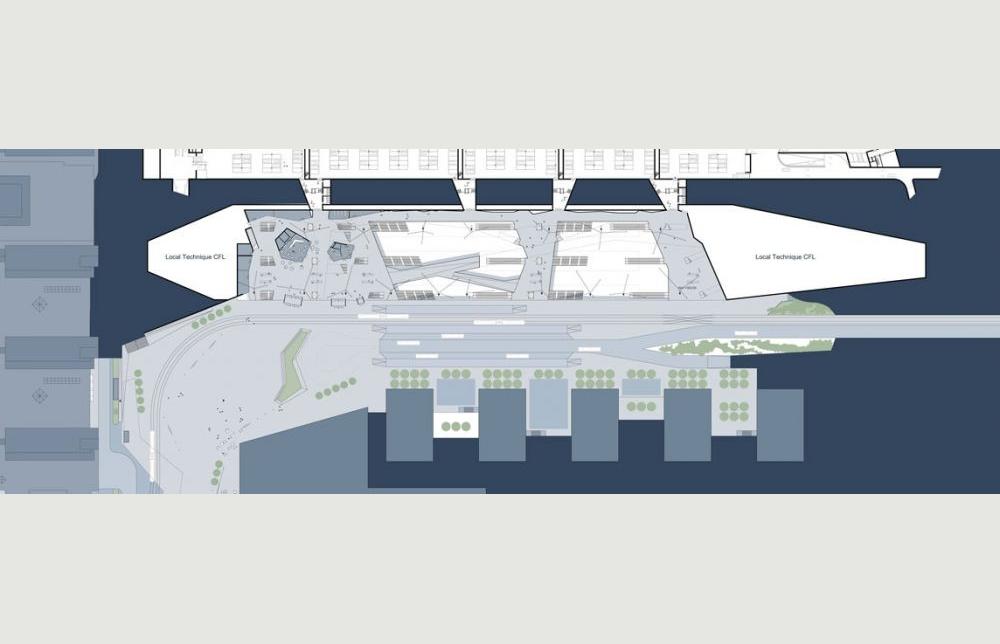 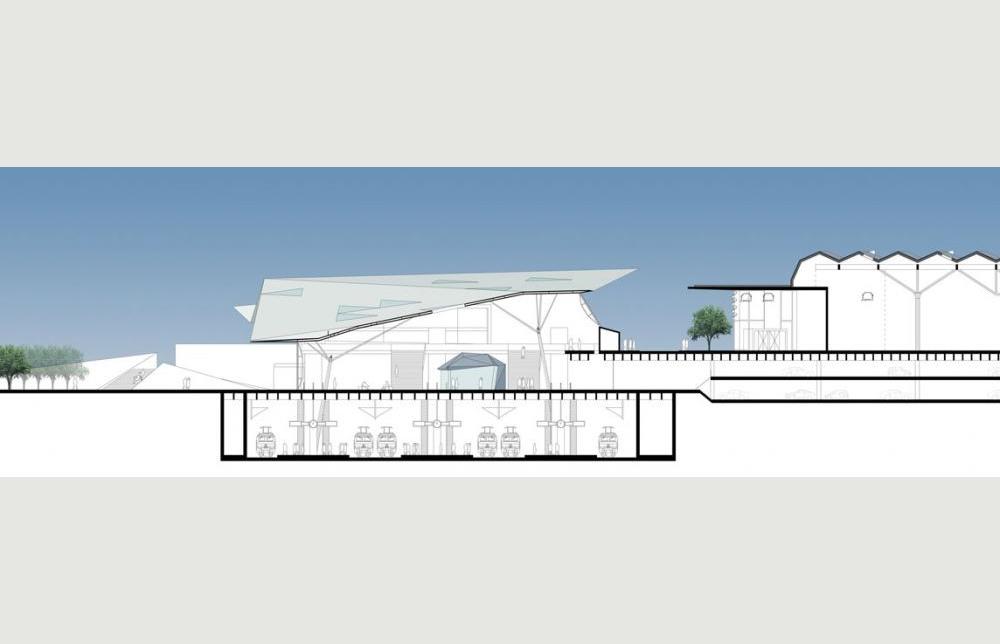 Kirchberg is a district consisting of a plateau in the north-east of Luxembourg-city. Developed from the early 60s, this district became the heart of the institutional and banking market of the Grand-Duchy, home to many European institutions, banks, financial institutions and insurance companies. These last years, it evolved also in a residential and cultural area. By 2020-2025, this business district is foreseen to provide a base for 10,000 inhabitants and 35,000 jobs.

The judicious integration of a peripheral station, a bus terminal and a tram stop was therefore inevitable to assure a sustainable development of the area.

This has been planned as a part of a large-scale project consisting in a sustainable redevelopment of an all-purpose exhibition hall, administration buildings, multifunctional and congress areas, and a hotel according to the urban design masterplan.

The different architectural elements have been designed as iconographic components of the cityscape, as landmarks on a district scale that mark out the limits of the public space including the Station.

Once united, these elements lead to a coherence of the area and a continuance between the different parts of the project i.e. public spaces, equipement and the station.

The continuous design of the whole space brings nobility to this urban hub. The coherence between the architecture and the landscaping of the Station and the Exhibition hall is achieved by a similar execution. Particular attention is paid to the scale of the public space, the scenography and the protection of urban paths. A diagonal movement taking the shape of a ramp through the space clearly embodies the connection from the station to the esplanade of the Exhibition centre.

Within this complex set on several levels, the station is no longer an obstacle but is a covered public space with a range of different and original paths through the site. Intermodal connections, train and other modes of transportation belong to the public arena and participate in the urban spectacle.

Rather than spread the functions of the station inside the long building, the activities of the station are concentrated around the waiting lounge at the top of the station facing the City and opened on the main boulevard of the district. The offset from the main entrance of the station reinforces the presence of this main urban function in the square that bears its name.

The station forecourt itself like the other surrounding public spaces are tailored to give each location an appropriate scale and to direct naturally the various courses. Architectures elements of the urban landscape allow managing different levels, to clarify the areas for trade and public transport but also to hide the delivery area of the hypermarket nearby.

The geometry of the station is based on the work of broken lines to express the dynamism of this hub. It also allows for the combination of the superstructure design work inside a unique cityscape. Work on spaces, views and natural light are favored over expensive finishings, effects and ostentatious luxury.

The architecture of the station and the morphology of its roof announce and guide the flow without necessarily going through the head station. Retaining structures are highly inclined, like embankments to smooth the transitions. The flow of pedestrians is accompanied by fluid spaces reducing wall effects.
To increase soft and pedestrian mobility, walking distances have been reduced to the bare minimum between the different modes of transport by a set of bridges, ramps, stairs and corridors suitable for disabled guests, from one level to another.

Services and shops are gathered into the head station, and established in the retaining walls that extend indoors. They surround the waiting lounge in the center of which two volumes are standing: the first hosts the station buffet and the second one the ticket booth including a reception and a waiting room.

The operating areas on the upper levels form the front of the head station. The public-service corporations i.e. city buses are concentrated in a low volume located along the street near the bus stops. Gathering these functions is appropriate for an optimal running of these working areas.

The energy concept of all buildings arises out of a questioning about the real energy needs. It is about to redefine what is actually and reasonably and reasonable required in terms of comforts for each function.

The one of the stations is based on the principle of a building in a building. The outer envelope protects against weather while the inner envelope acts as a thermal insulator.

The peripheral facades of the station do not play a role of thermal insulation. They form a protective covering against weather and wind. They are planned in simple clear glass set in simple metal frames. They are extremely transparent and step aside the style of the roof and the outdoor layout. They are vertical and extend south to meet the railway and bus tracks. In the north they display slopes and various breaks animating the upper promenade interacting with the exhibition centre. Completed by some other devices, this helps to reduce reverberation and increases the acoustic comfort inside the train station.

The upper parts of the facades are fitted with pivoting glass slides to enable natural ventilation of the station or smoke extraction in addition to the openings in the roof.

Within this main framework, the different functions take place in separate volumes insulated and heated by renewable energy. In this way, the energy costs are substantially reduced.

The materials used indoors are in line with those outdoors. They are hardy, robust and economical. The outer retaining walls of concrete extend into the station. They are gradually ennobled by the fineness of the work on shop windows and the integration of services and facilities.

The jury reviewed the projects on the following criteria: urban and architectural quality, quality of external works, answer to the program, functionality, investment costs, constructive concepts and techniques, environmental approach.