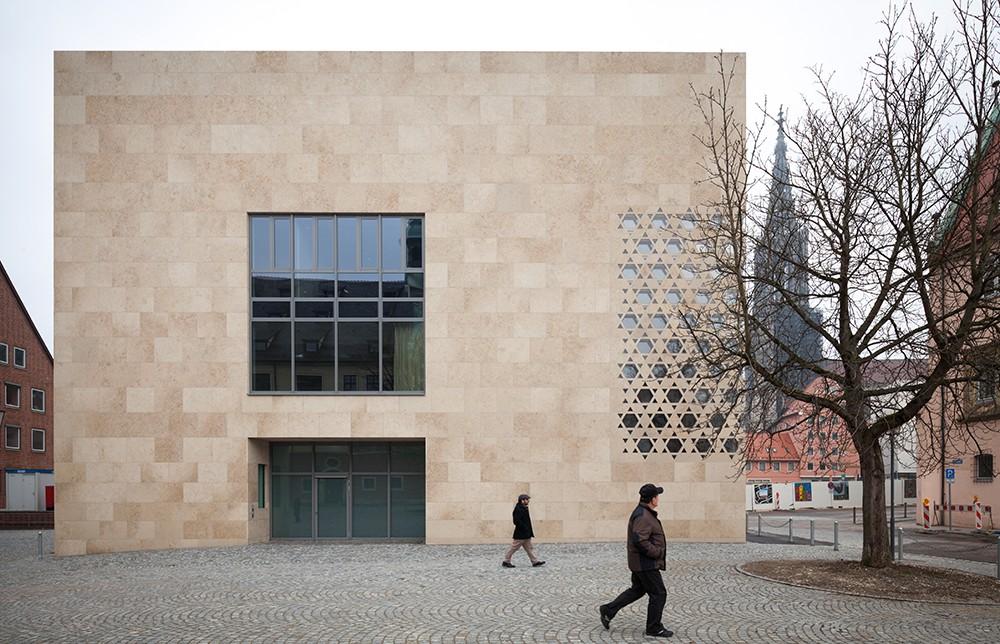 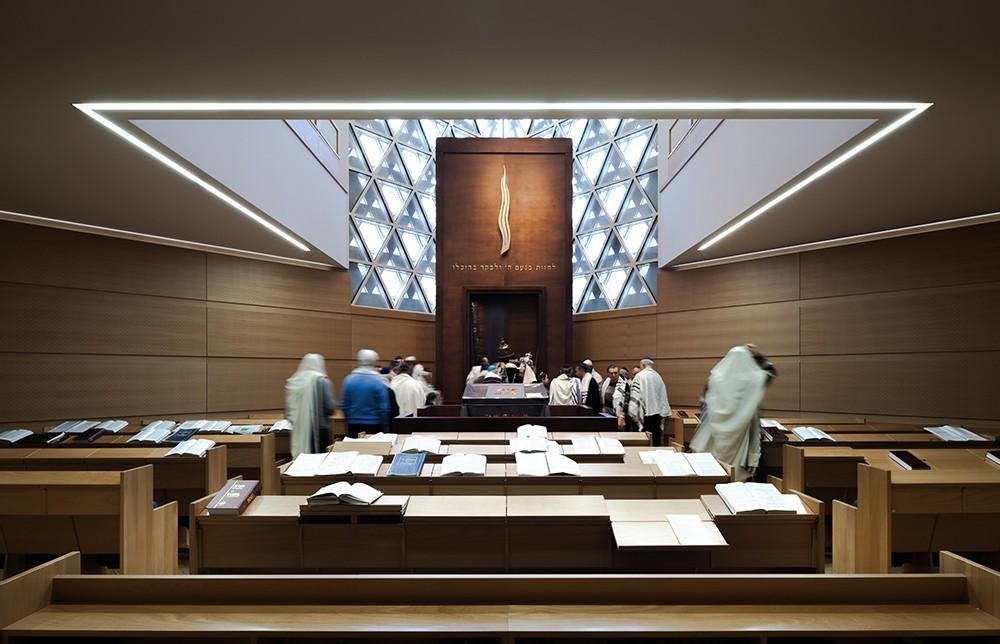 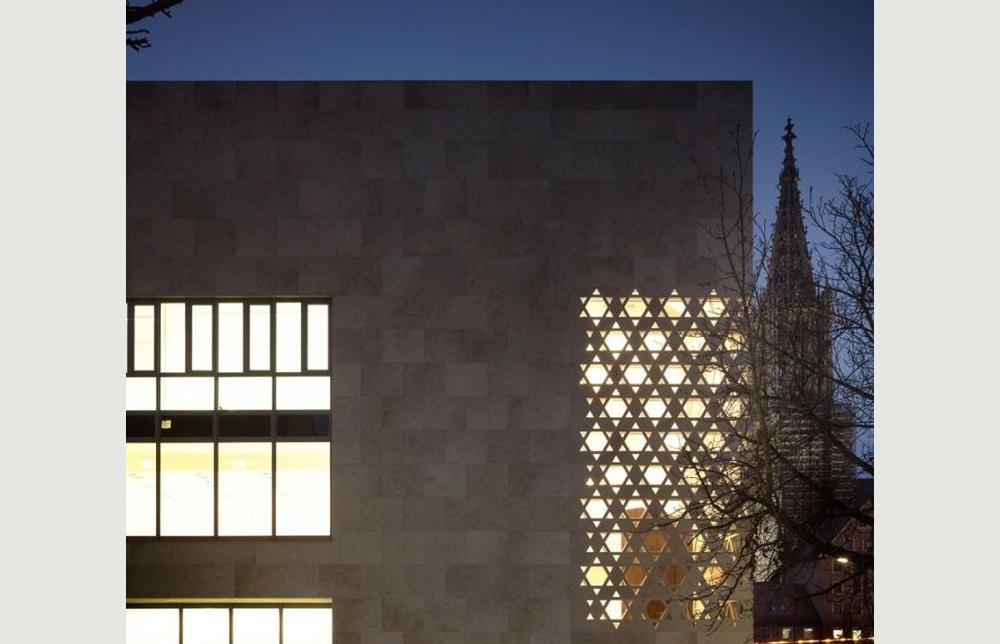 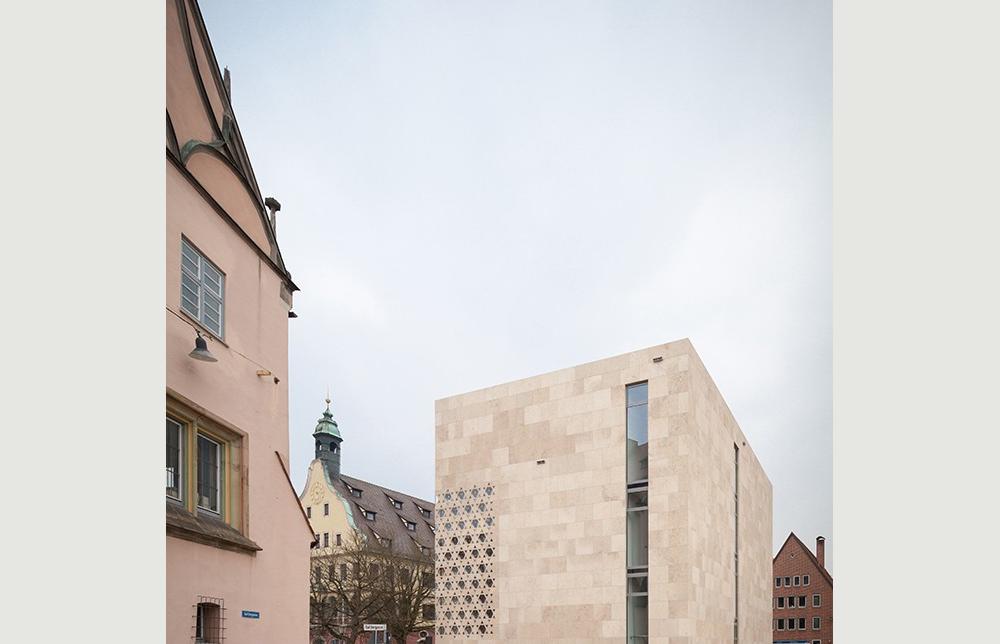 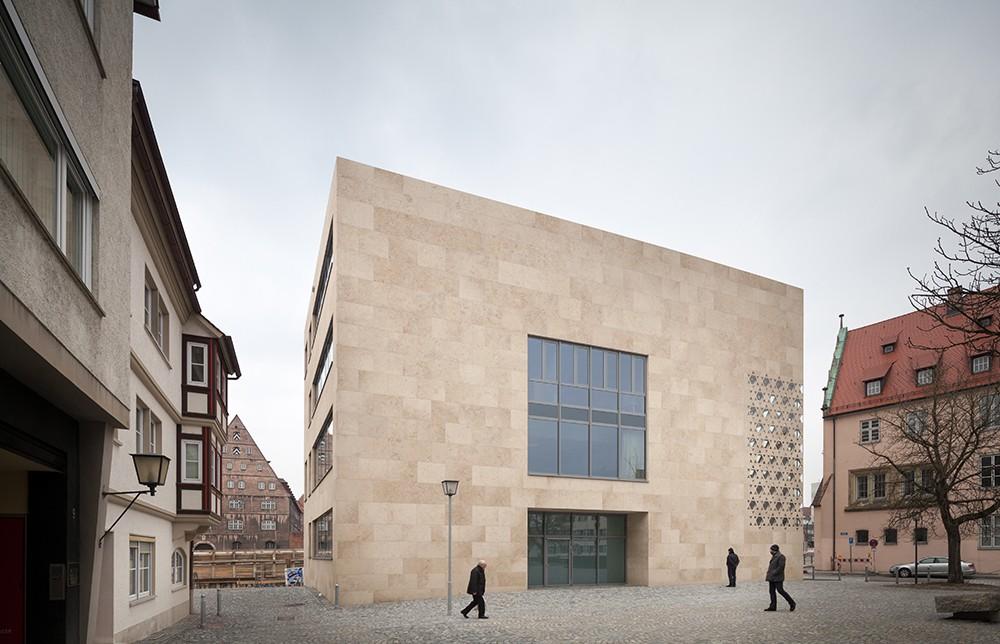 In 2009 the Israelite Religious Community of Württemberg statutory corporation (IRGW) decided to build a new synagogue for its community in Ulm, and so initiated a competition in partnership with the city of Ulm for the construction of a community centre with synagogue. The city of Ulm benevolently supported the building project and made a building site available in the centre of the Ulm Weinhof, just a stone’s throw from the former synagogue, which was destroyed on Kristallnacht.

On January 21st 2010, it was decided: the competition jury, under the direction of prof. Arno Lederer, unanimously chose the design by kister scheithauer gross architects and urban planners (ksg). “The team from Cologne succeeded in enriching this highly sensitive location in the city of Ulm, without detracting from its unique character,” said the city’s head of construction, Alexander Wetzig. A total of ten architects were invited to join the competition.

Subsequent to the competition success, the design was altered according to some proposals from the jury and the Rabbi. On February 8th 2011, the Ulm city council gave its approval for the altered design of the synagogue, again with a unanimous vote. The cuboid is now lower and shorter than originally planned during the competition. It now measures 24 meters in width, 16 in depth and at 17 meters high, is significantly lower than the nearby Schwörhaus.

The ground breaking ceremony was held on March 17th 2011. Together with the IRGW representatives, the mayor of Ulm Ivo Gönner and minister Yossi Peled as the Israeli representative, Prof. Susanne Gross opened the site.

Just 20 months later, the building has been completed and the new community centre with synagogue was ready for the celebratory opening ceremony. The building was full to capacity during the opening on Sunday, December 2nd 2012. The 300 invited guests included former Jewish citizens of Ulm, who fled during World War II. Speeches were held by Federal President of Germany Joachim Gauck, Prime Minister of Baden-Württemberg Winfried Kretschmann, the President of Central Council of Jews in Germany Dieter Graumann and Israel’s ambassador to Germany Yacov Hadas-Handelsman.

“The synagogue and the Jewish community centre are contained in a single structure. The compact cuboid is free standing in the square. This position is historical: on the Kristallnacht in 1938, the former synagogue, which was enclosed in a road side development, was destroyed. After World War II, a secular building was constructed in the space. The synagogue and the Jewish community lost its ancestral place in the centre of Ulm.

The construction of the current synagogue has opened a new site, in the middle of the square, the Ulm Weinhof. It is as though the synagogue has taken a step forward from its former position, it has reclaimed its location. With no constructed border, it stands abrupt and solitary on the Weinhof.

All the spaces of the community centre and the synagogue are jointed in the smooth structure, which protrudes from the limestone facade without projections or retractions: a foyer on the ground floor, an underground Mikvah, a meeting hall on the first floor. The school and administrative rooms are on the second floor. On the third floor, snug in a private inner courtyard, is the child day care centre with outdoor playing area. The play area is also the roof of the sacral room.

Inside, all the rooms are organised orthogonally, with one exception: the prayer room as the actual synagogue. The long side of the sacral room stretches diagonally across the room, in one turn around the only, free-standing interior building support. The position of this space diagonal has an overlying religious meaning; its geographical direction is directly towards Jerusalem, the spiritual and religious centre of Judaism.

The diagonal room layout creates a corner window in the sacral room, which plays with a pattern of the Star of David as space framework. With 600 individual windows, the space in the synagogue is illuminated from many points, with the Torah case as focal point in this spiritual centre. At dusk, the pattern is also projected outwards by inner lighting, clearly but simply indicating the building’s purpose.

Apart from the large scale corner window, the building is otherwise quite subtle. In the necessary function areas, window openings break through the otherwise closed natural stone facade. The natural stone is only diluted in the sacral room, so that the perforations in the facade allow the light to penetrate into the synagogue, whilst also projecting it outwards.”

The reinforced concrete construction is covered in a limestone facade. This ‘Dietfurt limestone’ is mined in Bavarian Dietfurt near Treuchtlingen. The natural stone cladding with a smooth surface and closed joins with the same colour mortar, is made from large limestone plates up to 1.20 x 0.90 meters. The plates have staggered joins and are arranged horizontally.

The corner window of the synagogue has the dimensions 2 x 4.20 x 8.50 meters. The steel supporting structure underneath consists of a flat matrix with triangular fields. This triangular construction proved to be particularly resilient, meaning the depth of the foundations could be made much shallower.

A Star of David in the perforated façade consists of six triangles, with 19 cm long sides and a regular hexagon, 50 cm high. The limestone was perforated using a high-pressure water jet.

As well as the synagogue, the four floor building includes a Mikvah (ritual bath), community hall, library, playgroup with playground and a youth centre. Stoneware tiles are laid in the foyer and linoleum in the remaining rooms. The synagogue room is laid with oak parquet, as is the community hall.

The prayer room has space for 125 people, with 40 of these in the women’s gallery. The benches come from Israel. The walls are up to three meters high with timber panels covering a wooden structure. The walls are also covered in a light acoustic plaster.

The Torah case is in the corner of the synagogue room which faces towards Jerusalem. In front of it is the bimah, a raised platform with a lectern, from which the Torah scrolls are unrolled and dictated. These two liturgically functional elements were made in Israel, under the Rabbi’s direct instruction. A further custom made item is the dodecagonal chandelier, symbolising the twelve lines of the people of Israel. The 3.30 meter wide chandelier floats over the bimah and seating.