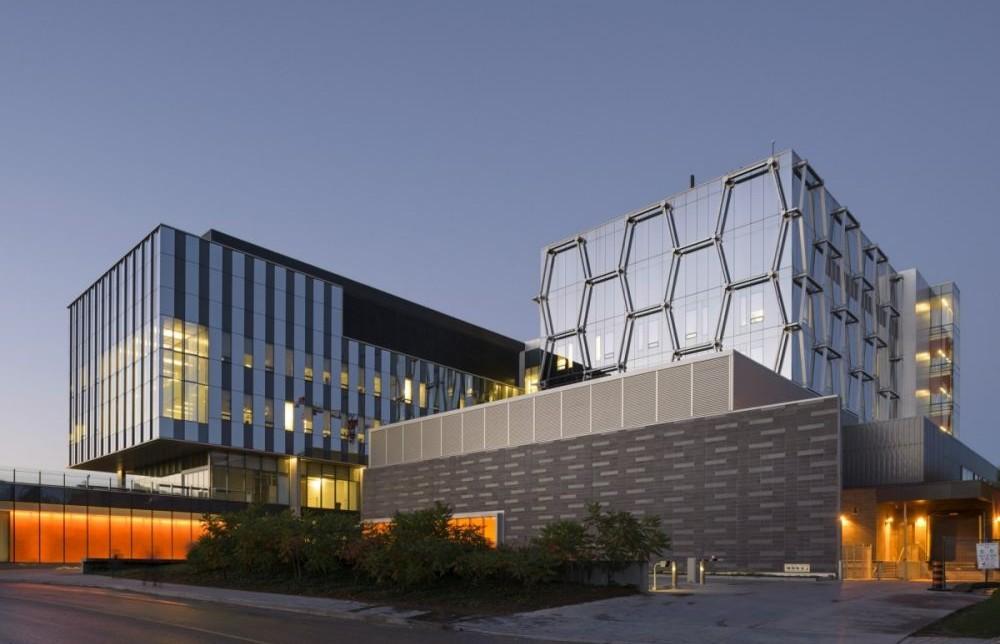 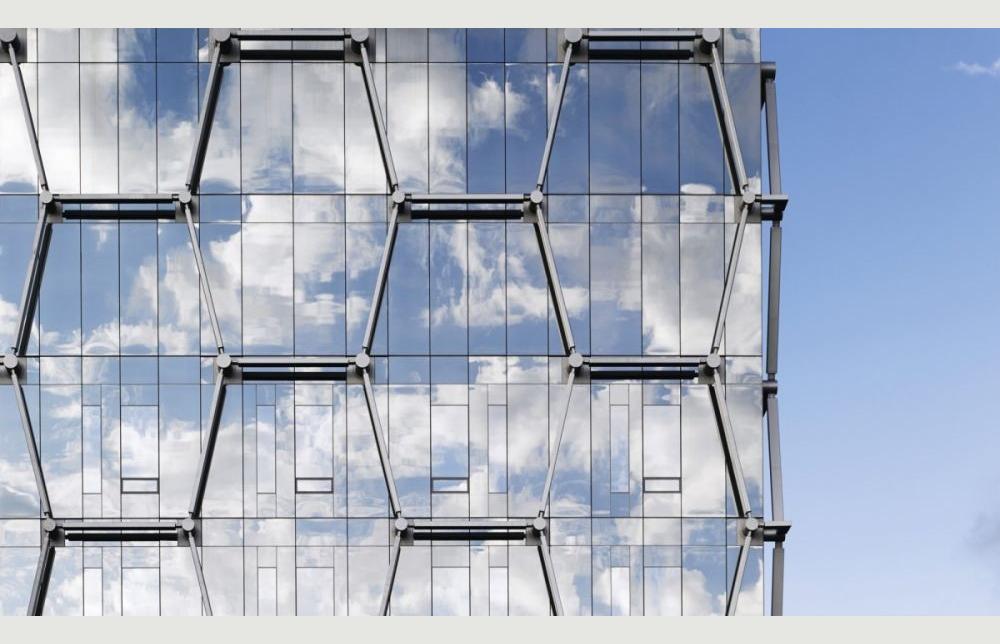 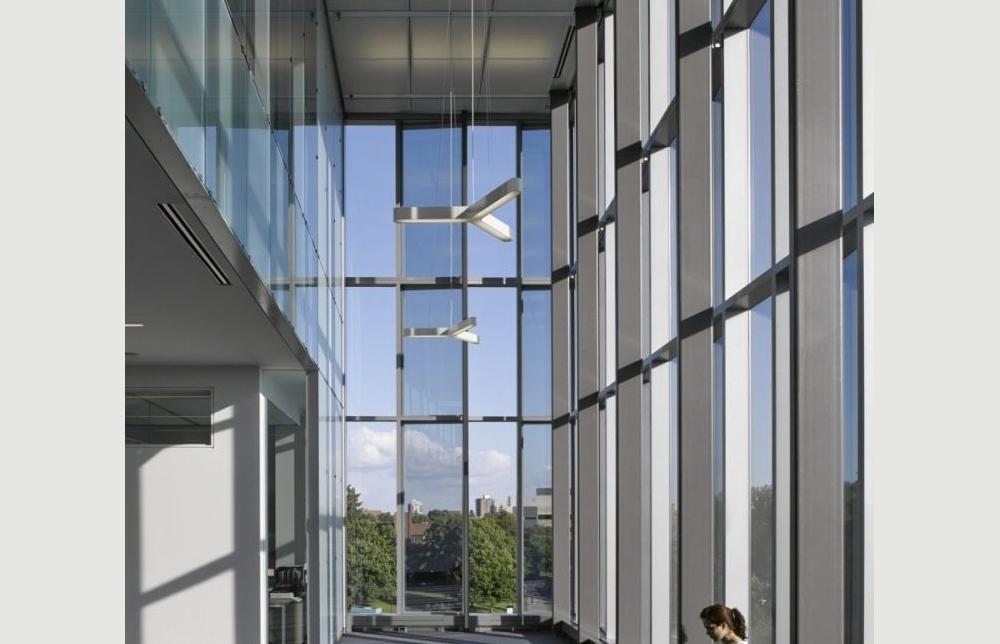 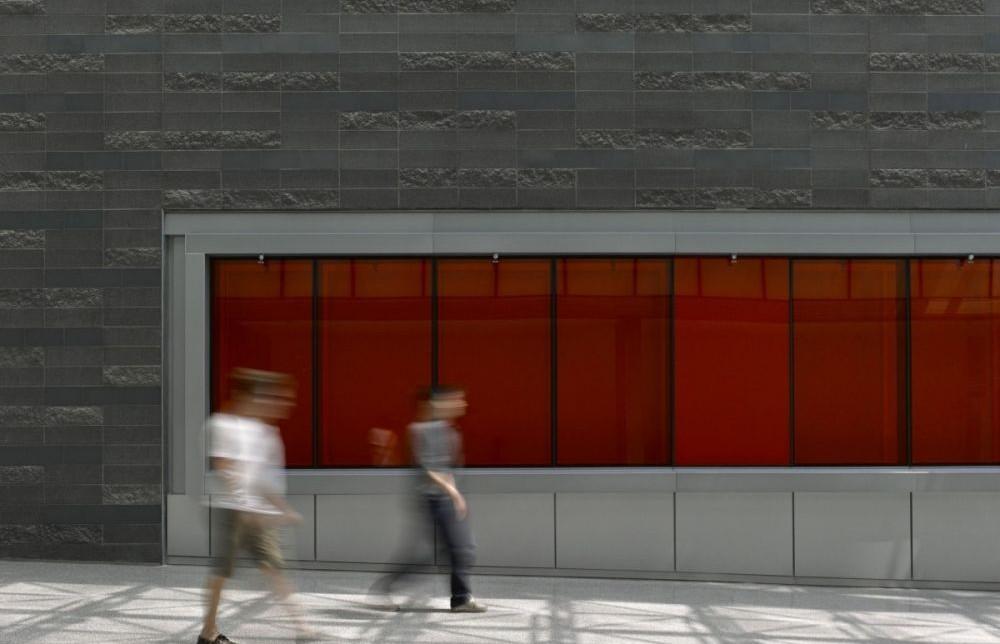 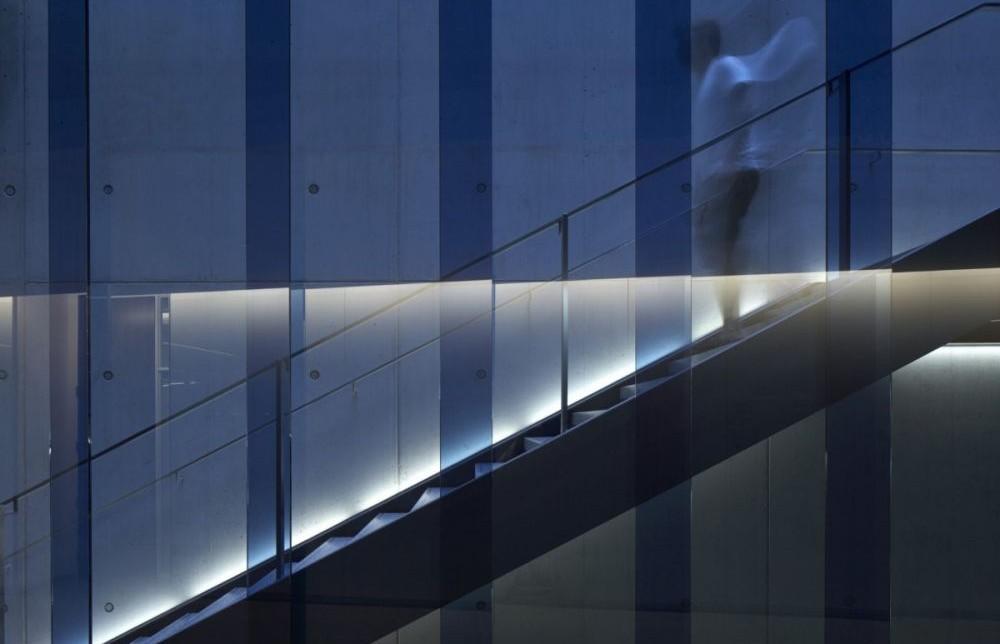 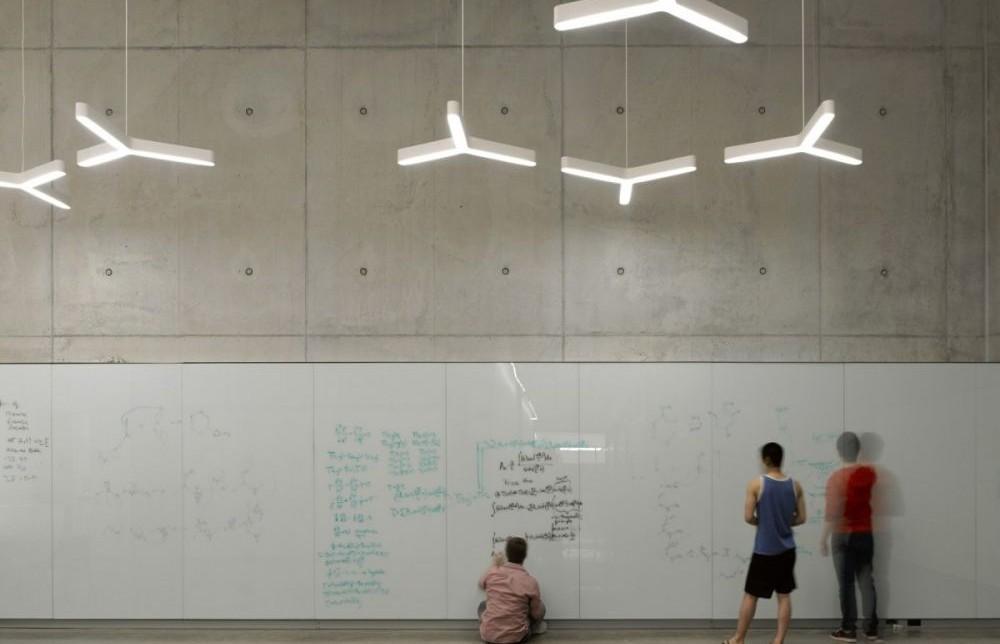 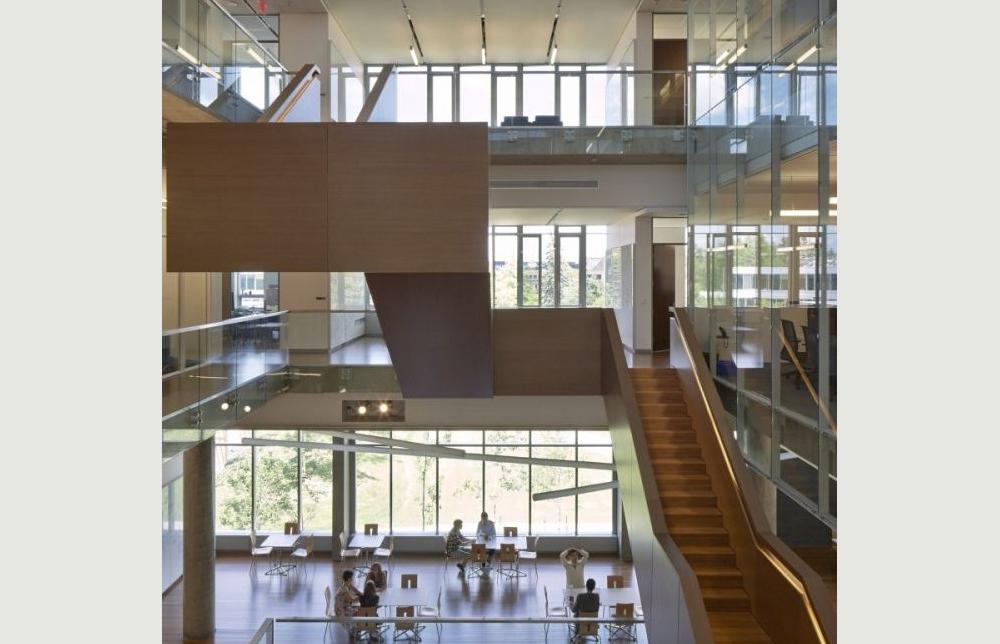 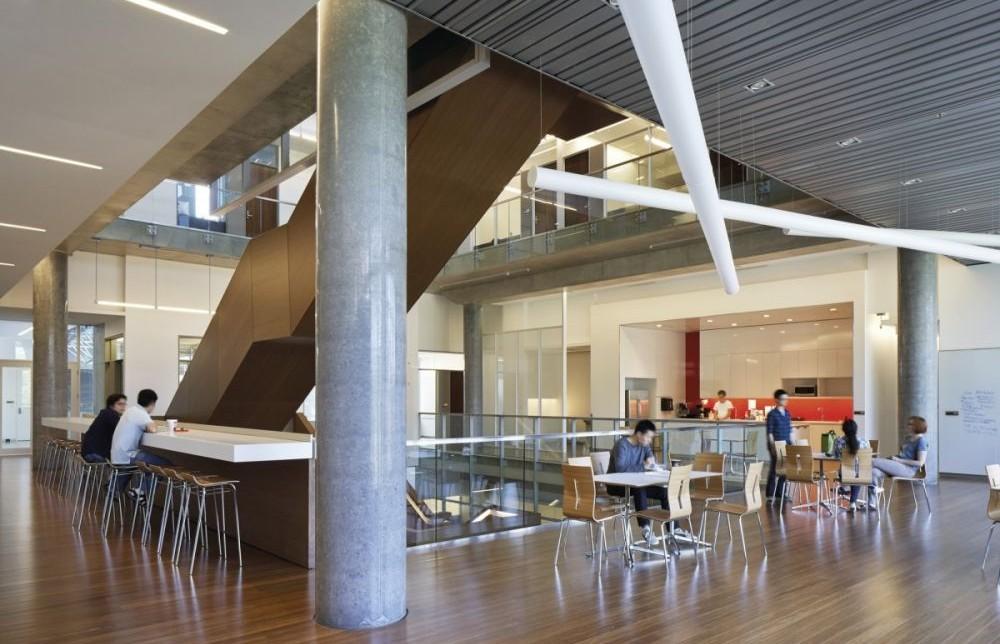 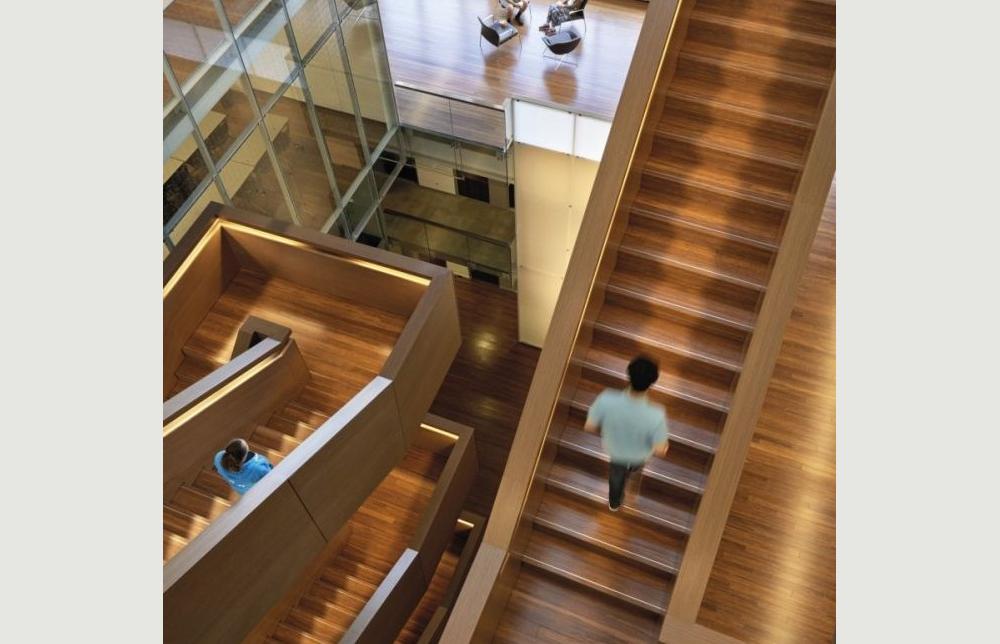 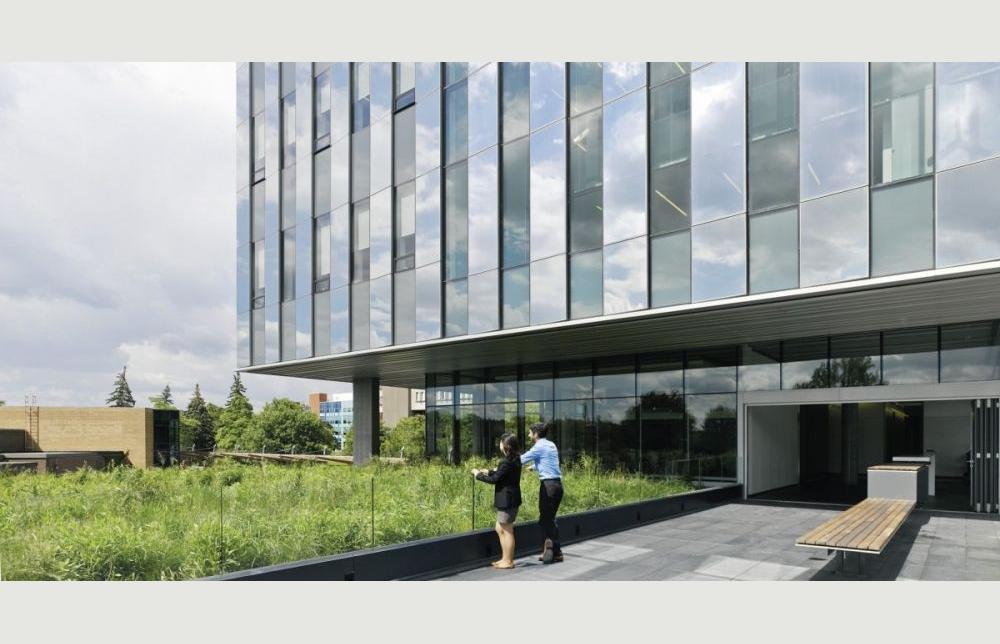 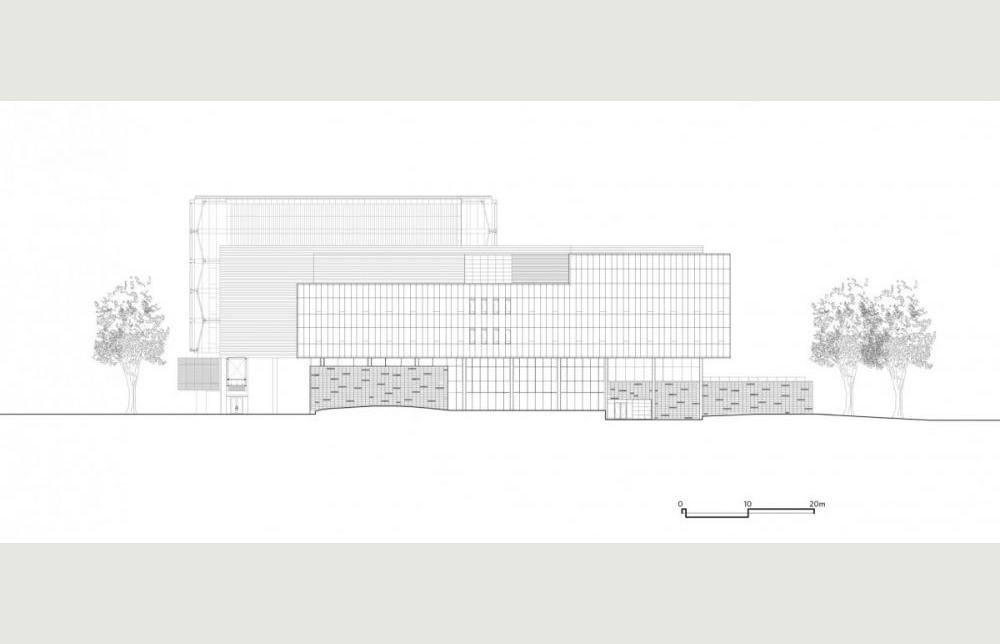 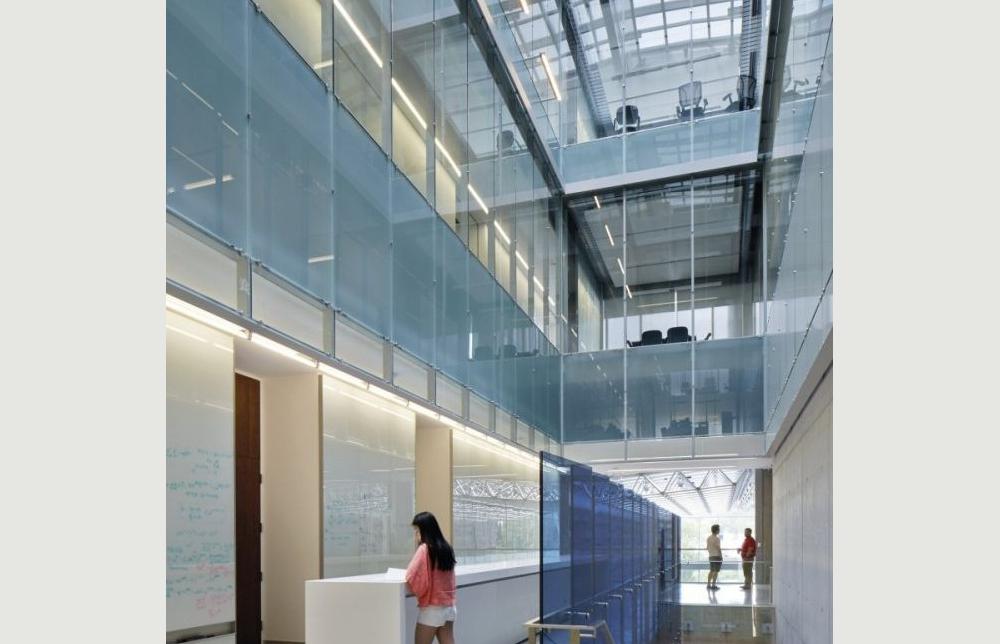 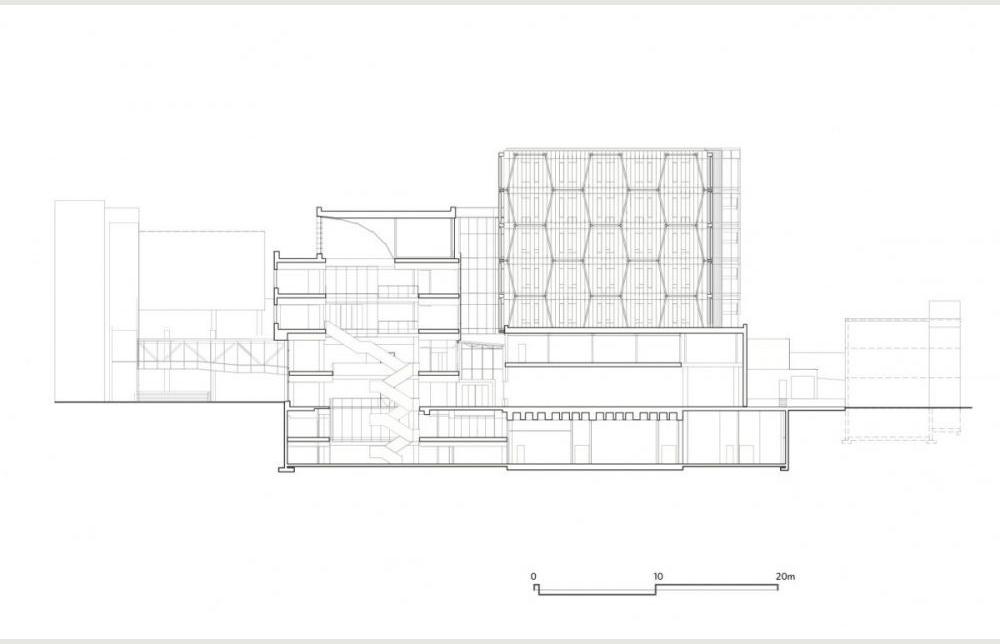 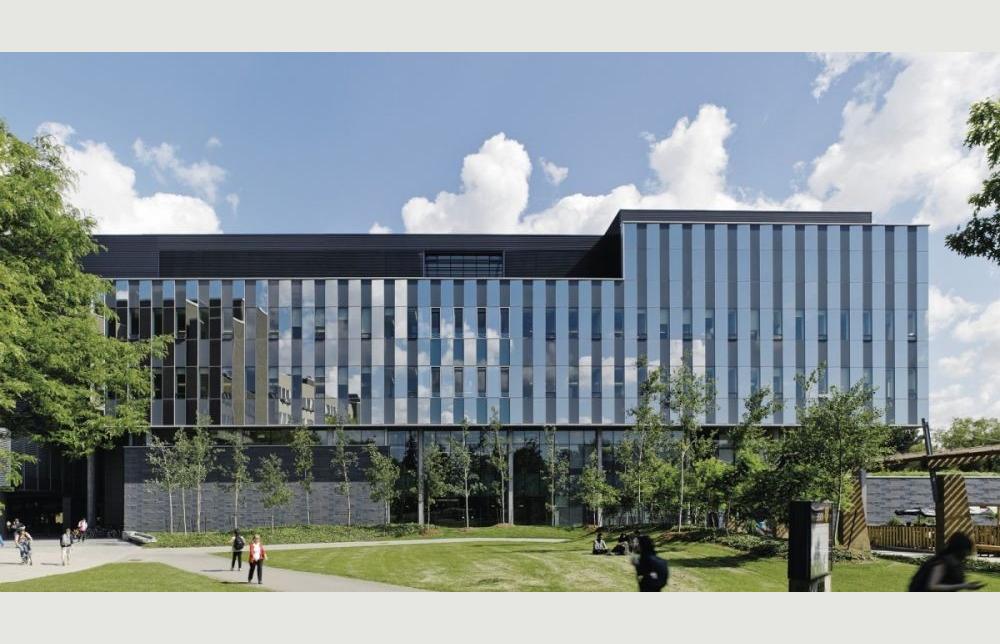 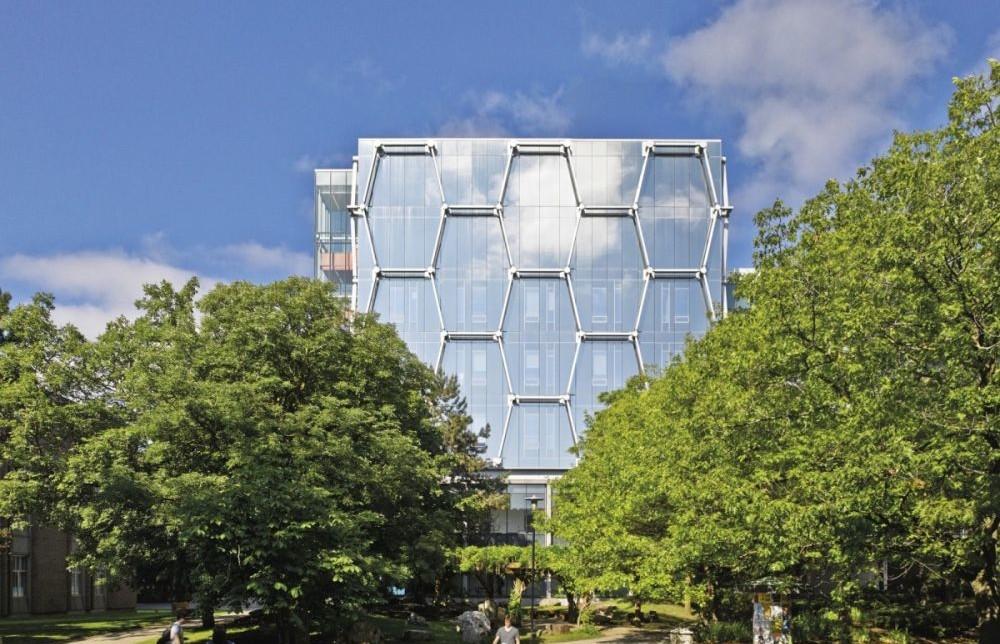 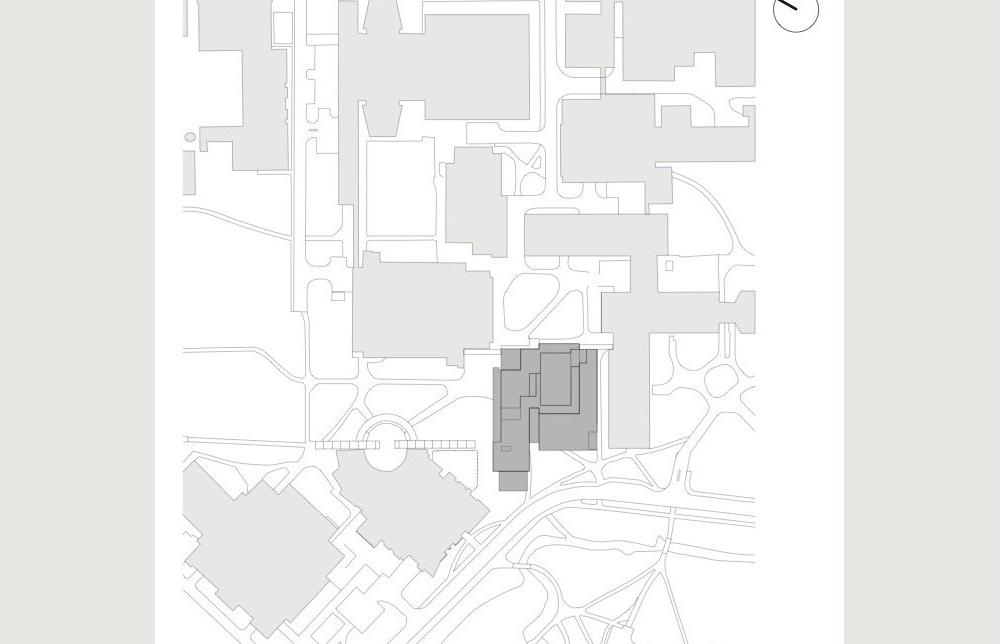 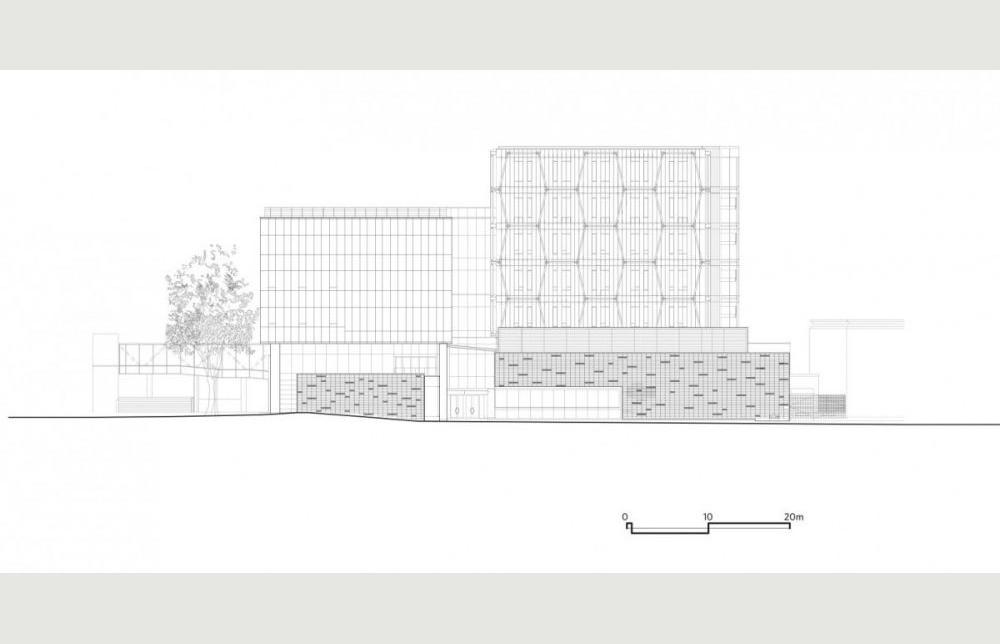 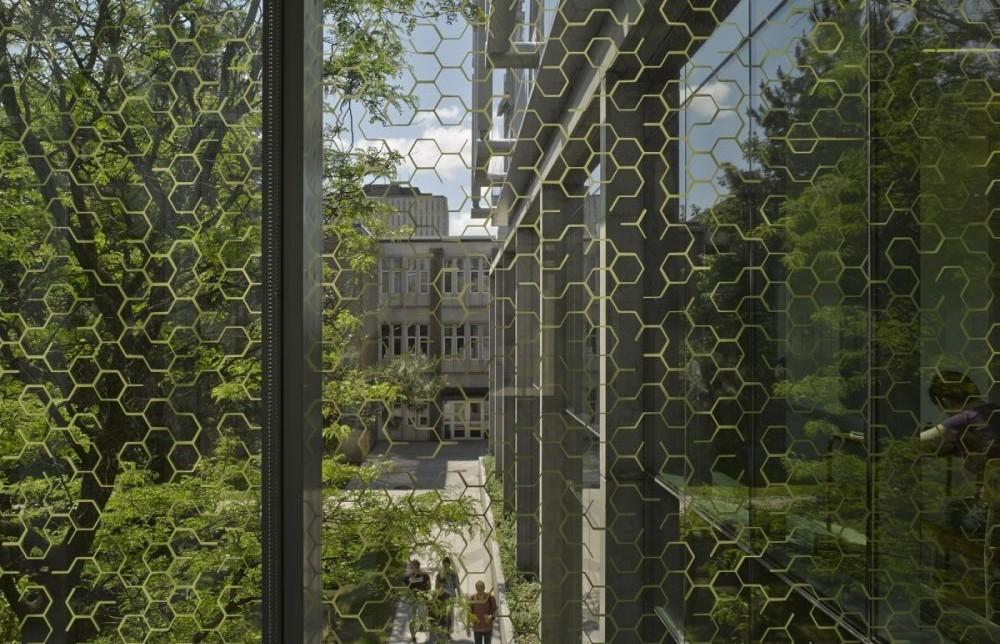 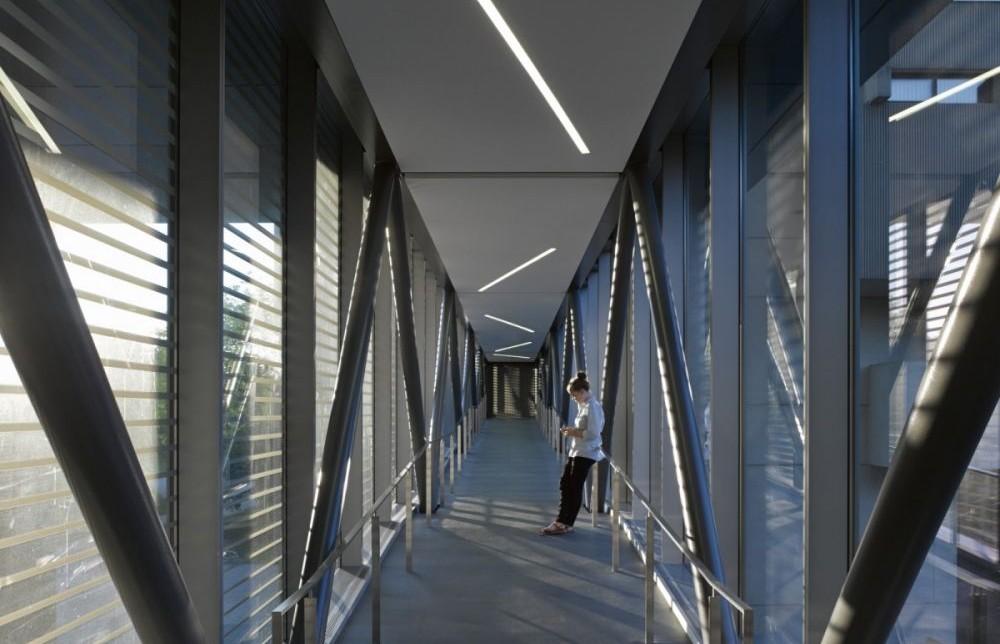 The Quantum-Nano Centre (QNC) at the University of Waterloo is the first research facility of its kind in the world to bring together the disciplines of quantum com­puting and nanotechnology in one building. It was conceived to generate synergies between the respective fields of quantum computing and nanotechnology for ground­breaking research leading to innovative solutions and commercialization.

Site: The building is located on the University of Waterloo’s main campus in the Math/Computer/Science precinct and set within an existing network of routes and courtyards.

Program: The five-storey, 26,500-square-metre facility houses the Institute for Quantum Computing (IQC), the Waterloo Institute for Nanotechnology and the University of Waterloo’s undergraduate program in nanotechnology engineering for up to 400 academics. It includes a 929-square-metre cleanroom with fabrication facilities for quantum and nanodevices, an advanced metrology suite, extensive teaching and research laboratories, a multi-purpose space/auditorium, seminar rooms and offices.

Concept: To provide the IQC and nanotechnology engineering each with its separate identity within the whole, the massing strategy combines two volumes joined by a common six-storey central atrium with two main entrances: one on the ring road to serve IQC and the other on the campus side for nano­technology engineering. The atrium also provides a sheltered pedestrian route and informal gathering space.

The IQC is housed in a ‘bar’ building with an east-west orientation. The heart of the IQC is the six-storey atrium with suspended stairs. Conceptually inspired by the Newton Institute in Cambridge, England, it features ‘mind spaces’ — lounge, office and meeting rooms — organized around the atrium to promote interdisciplinary interaction. A series of back-painted glass whiteboards reflect light and provide writing surfaces for capturing spontaneous ideas.

The nanotechnology engineering research ‘box’ faces the campus. The plan is based on a traditional laboratory building layout with perimeter offices and interior labs. The perimeter of the volume is supported by an exterior structural steel “honeycomb” which is suspended from concealed steel trusses in the penthouse. The structural honeycomb allows column-free, flexible office space and minimizes structural columns in the cleanroom below. The QNC is constructed to the most stringent scientific standards to reduce vibration, temperature fluctuations, electromagnetic fields and other sources of ‘noise’ that can disrupt quantum and nanoscale experiments.

In order to achieve an environment with low vibration, low electromagnetic interference (EMI) and minimal radio frequency interference, advanced structural, mechanical and electrical designs were employed and lab spaces were concentrated below grade where these effects are minimized.

Materials: The podium is clad with burnished concrete block to relate to the primarily masonry campus fabric of the University of Waterloo. The IQC façade plays on the concept of ‘superposition’ (where a digital switch can be on, off or both simultaneously) through degrees of reflection, transparency and the play of light on its surfaces.