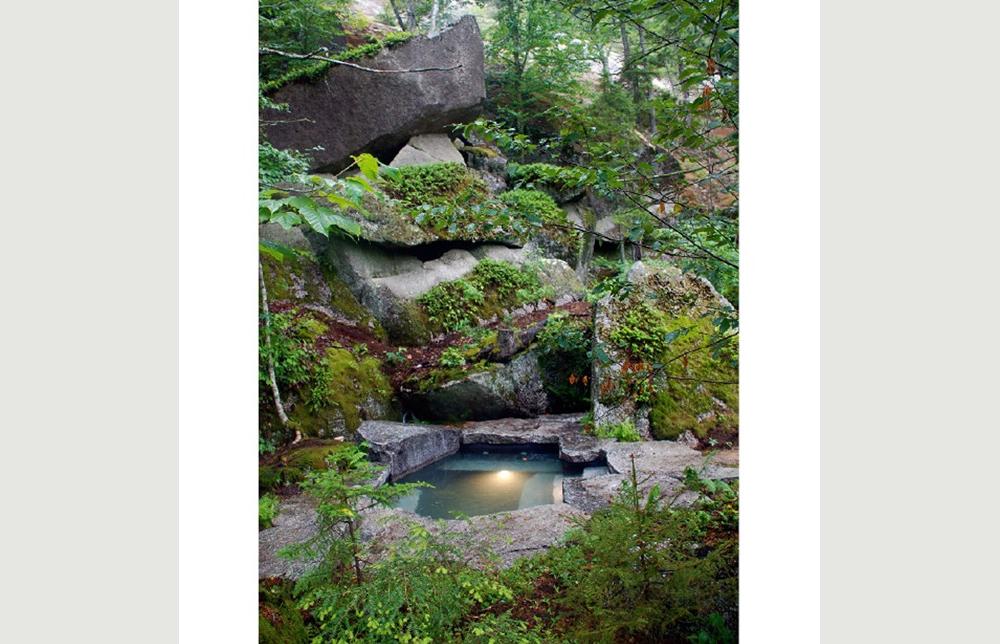 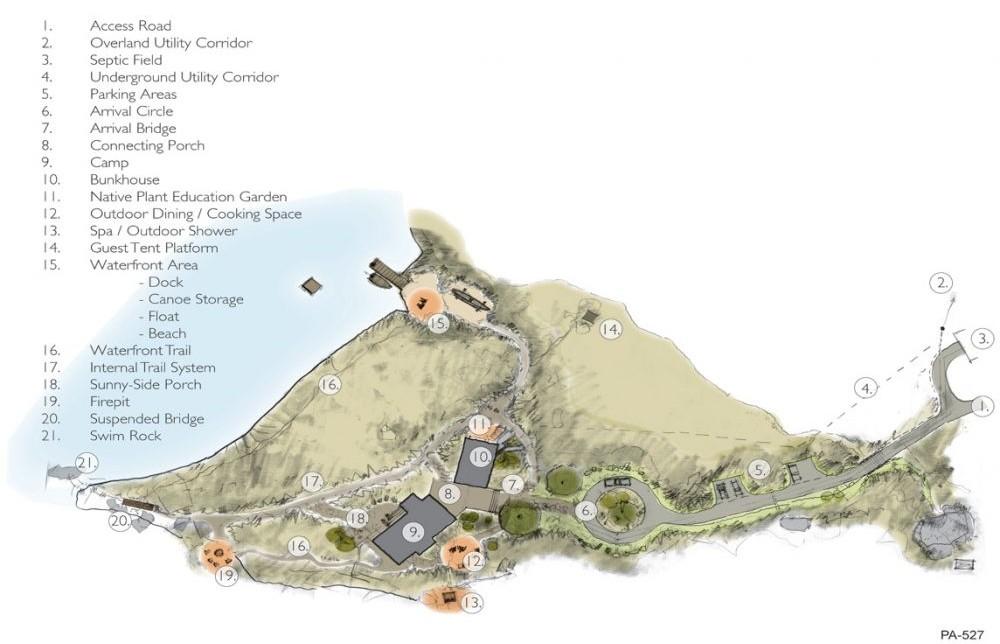 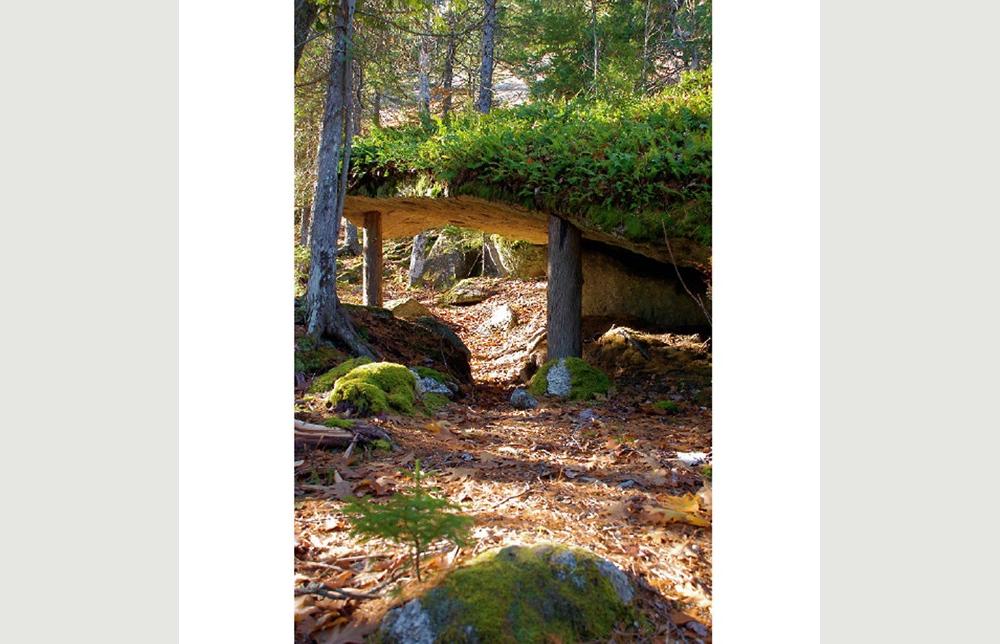 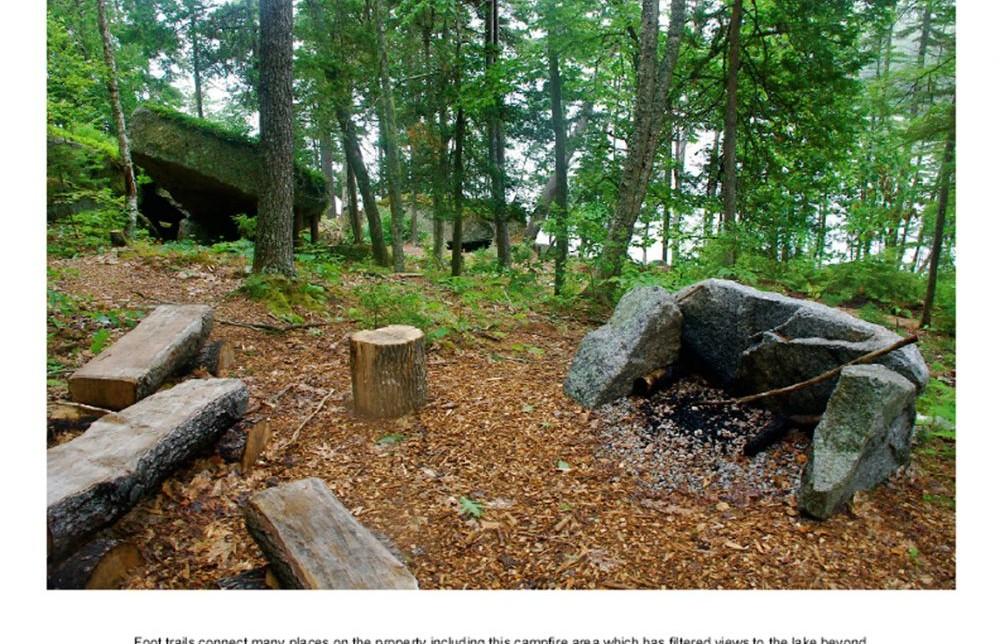 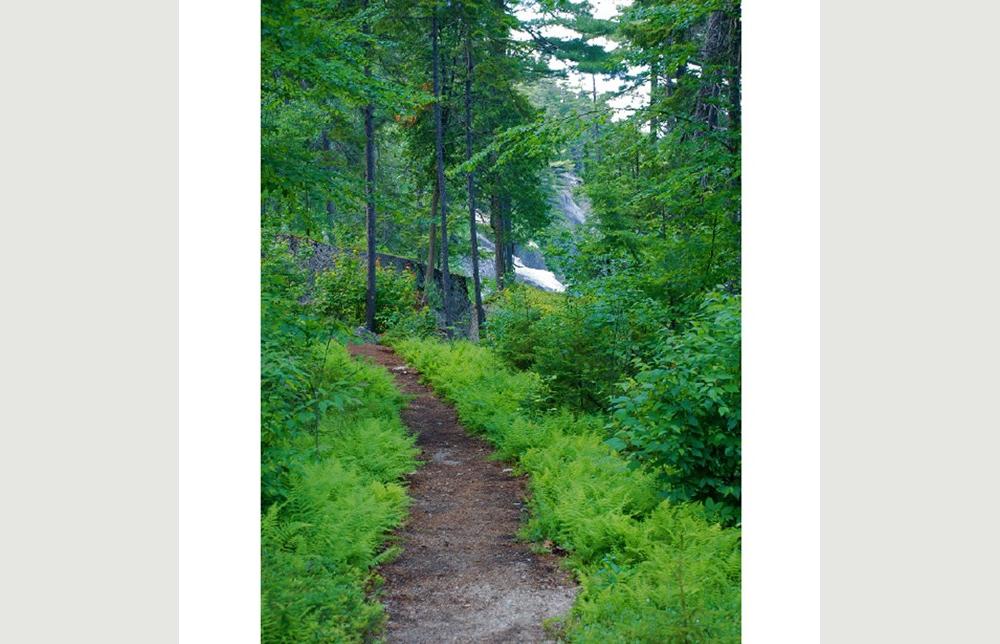 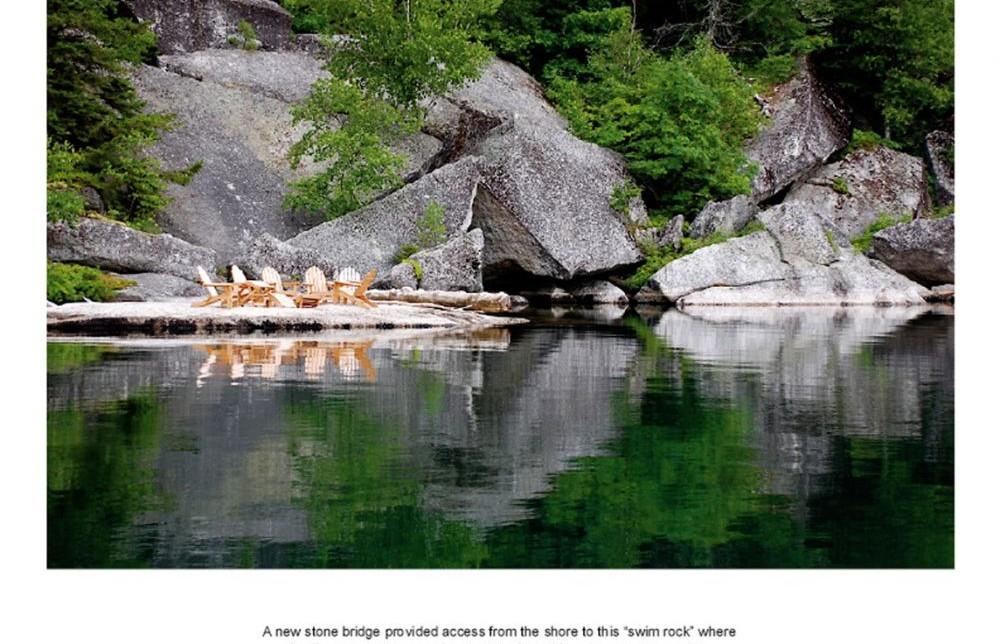 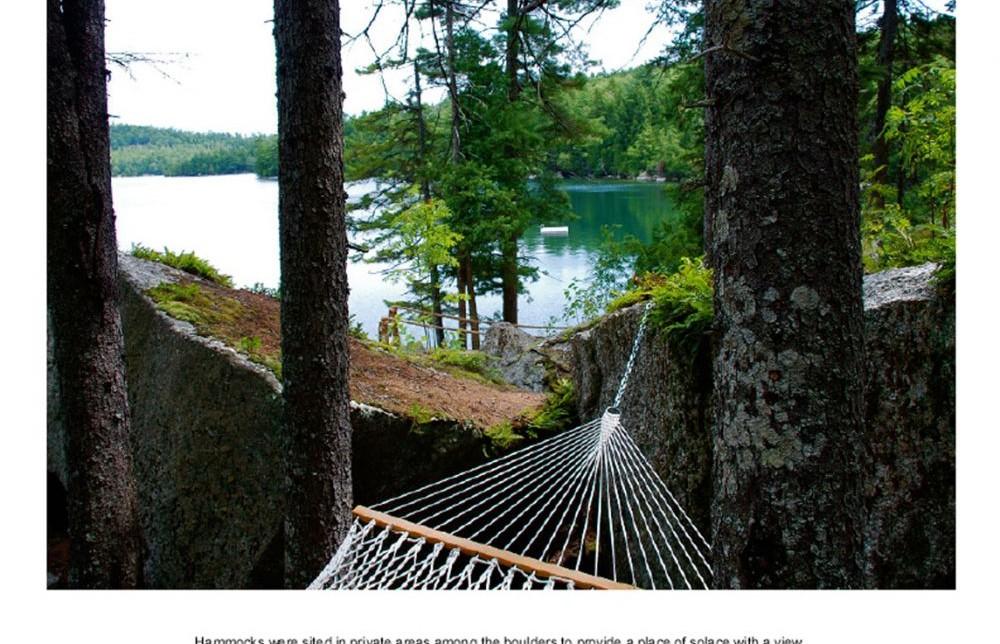 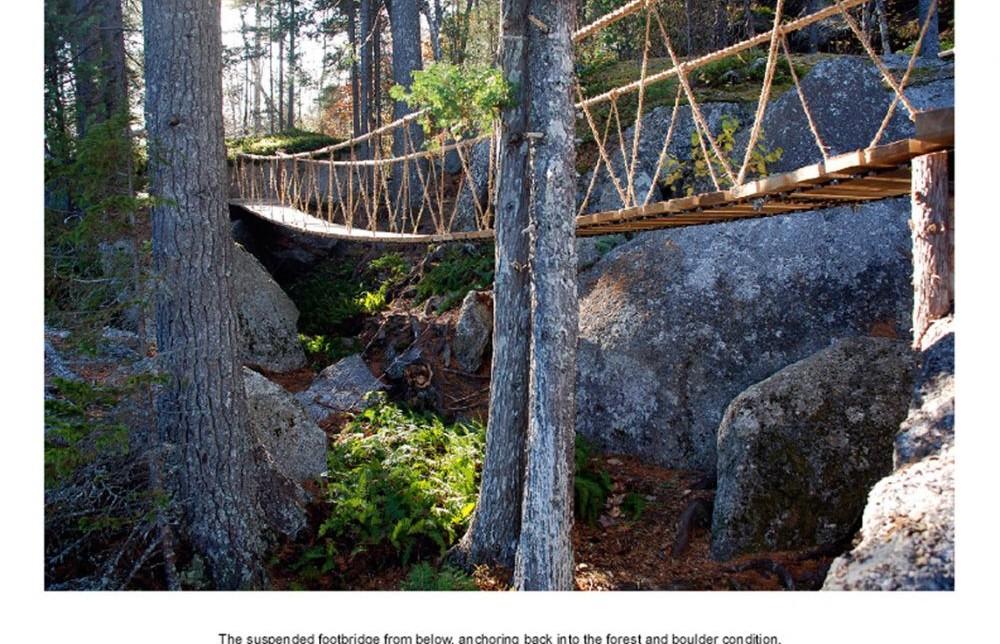 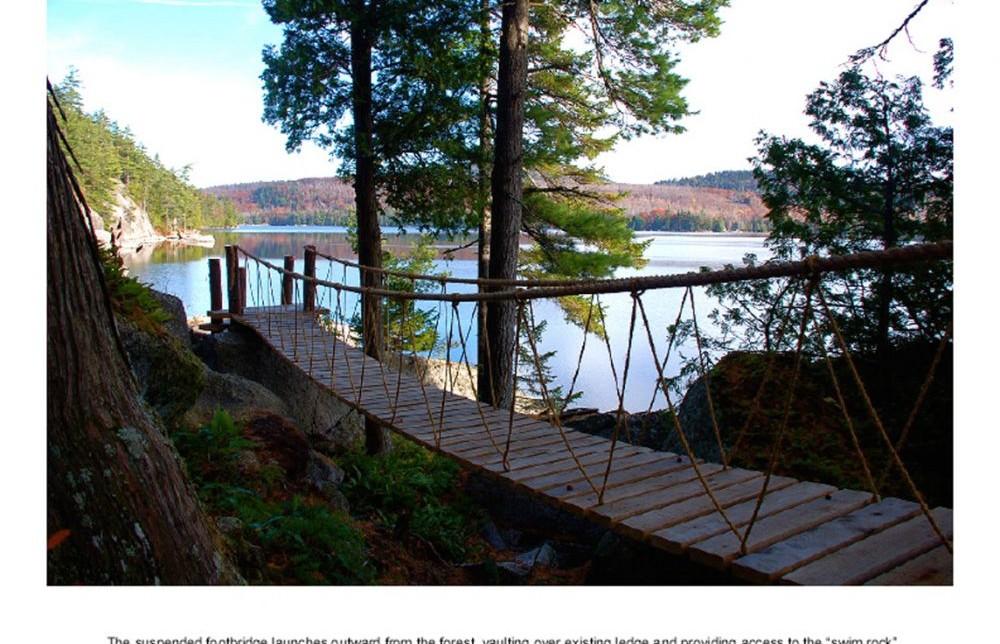 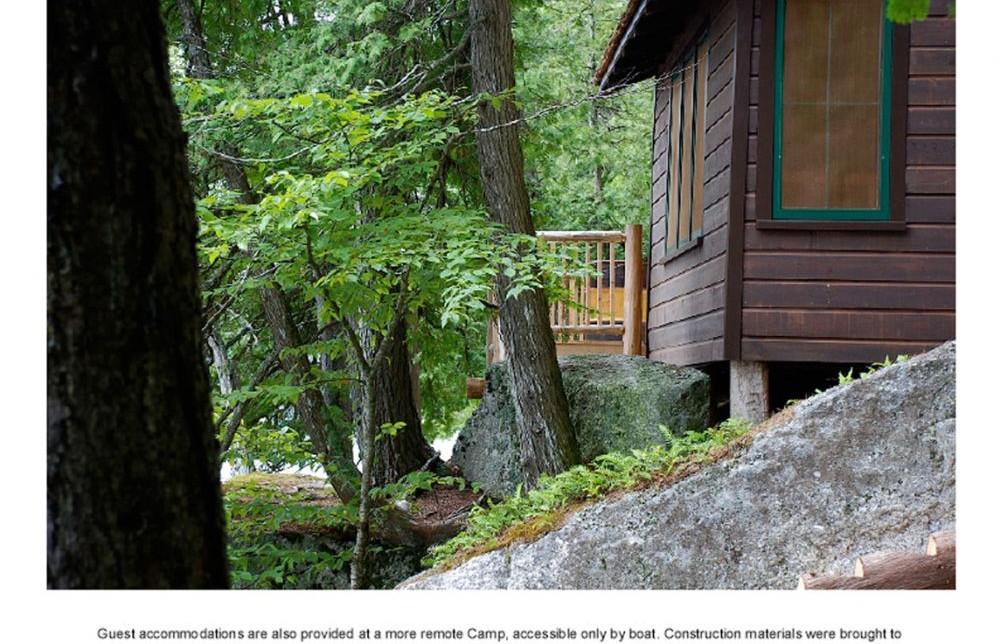 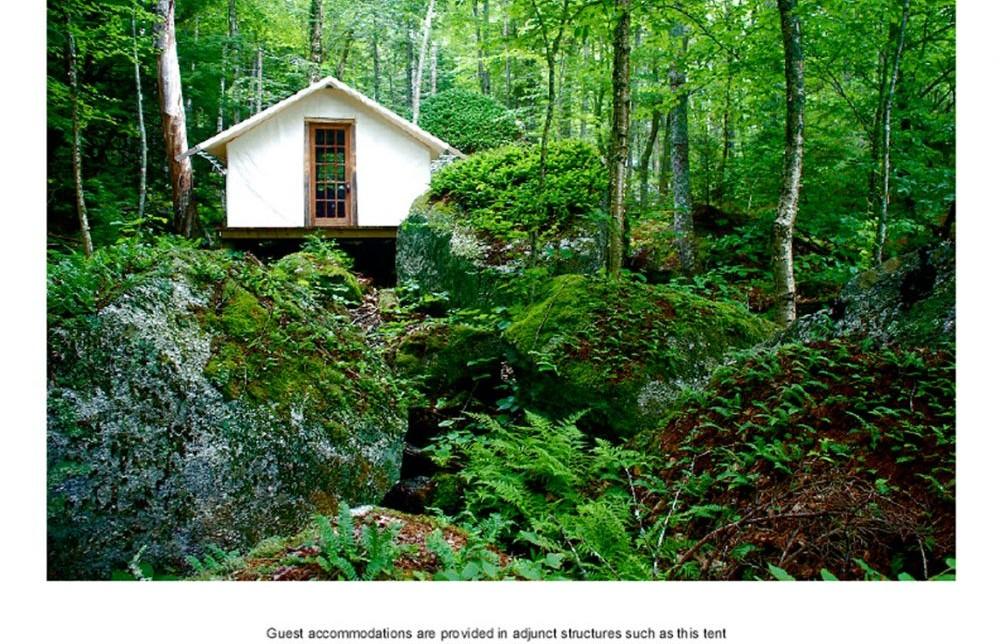 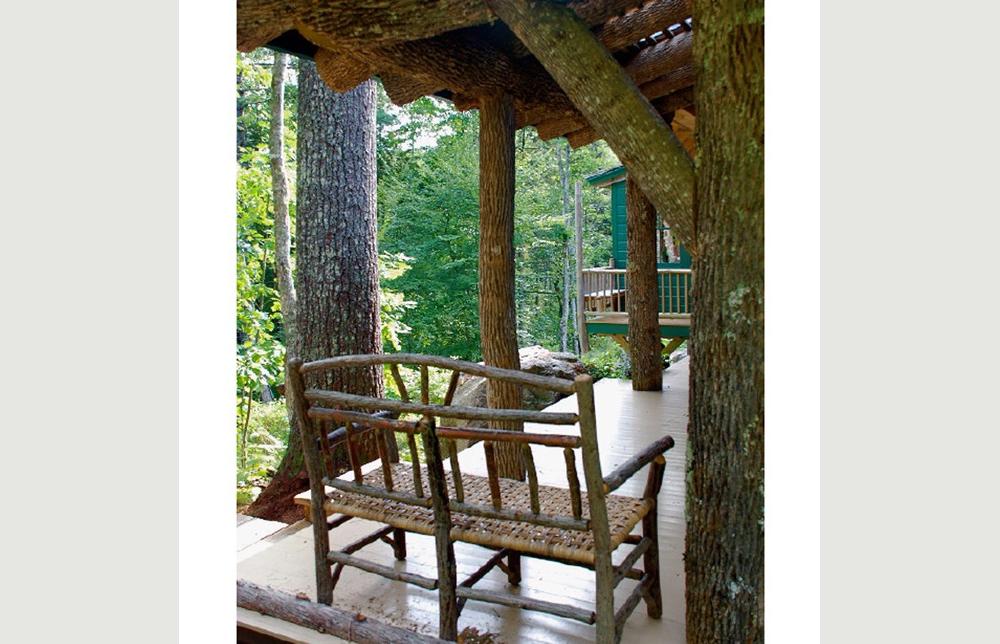 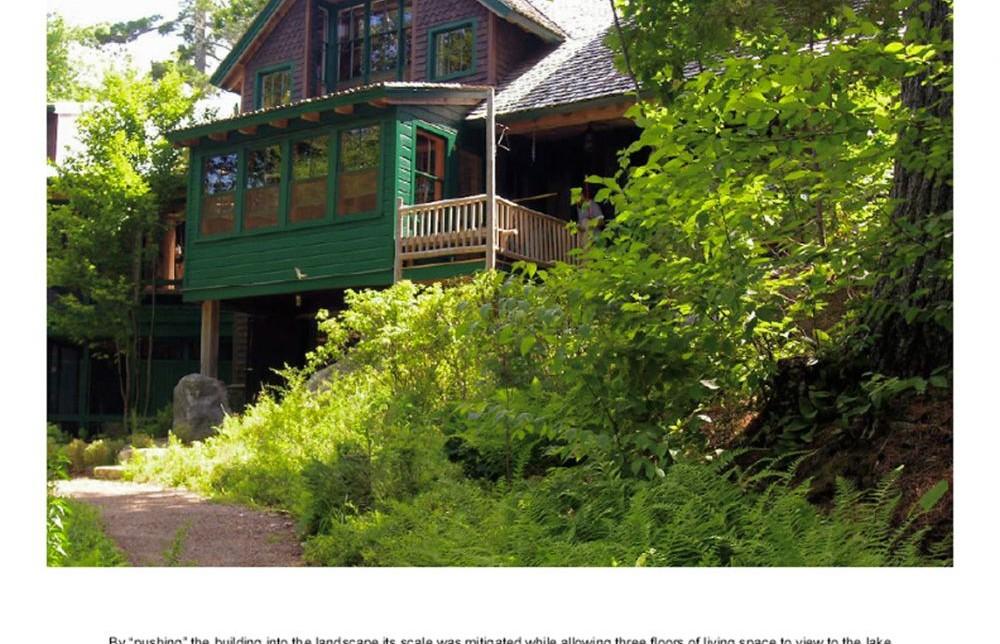 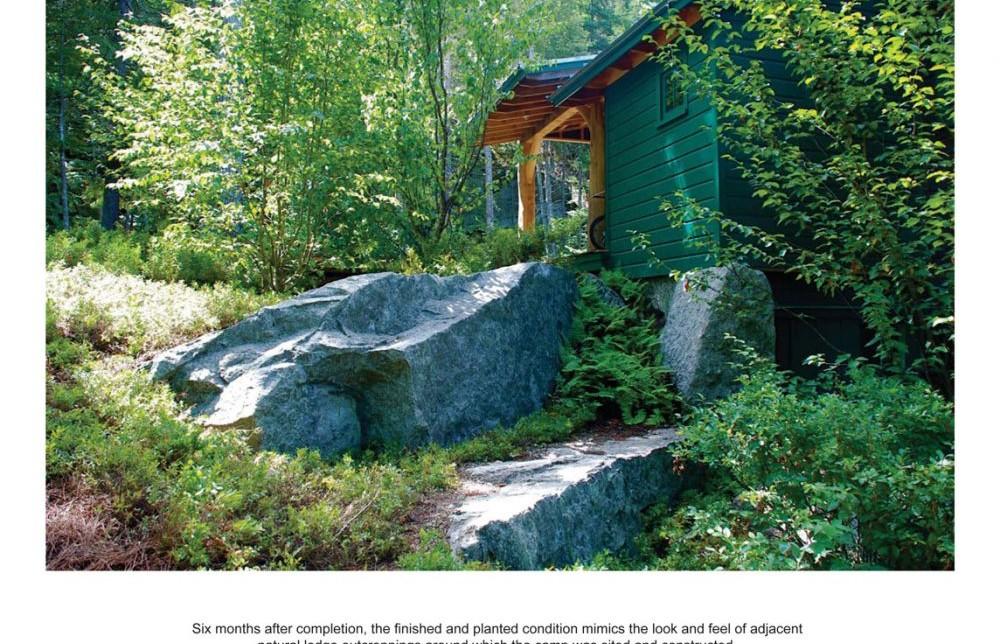 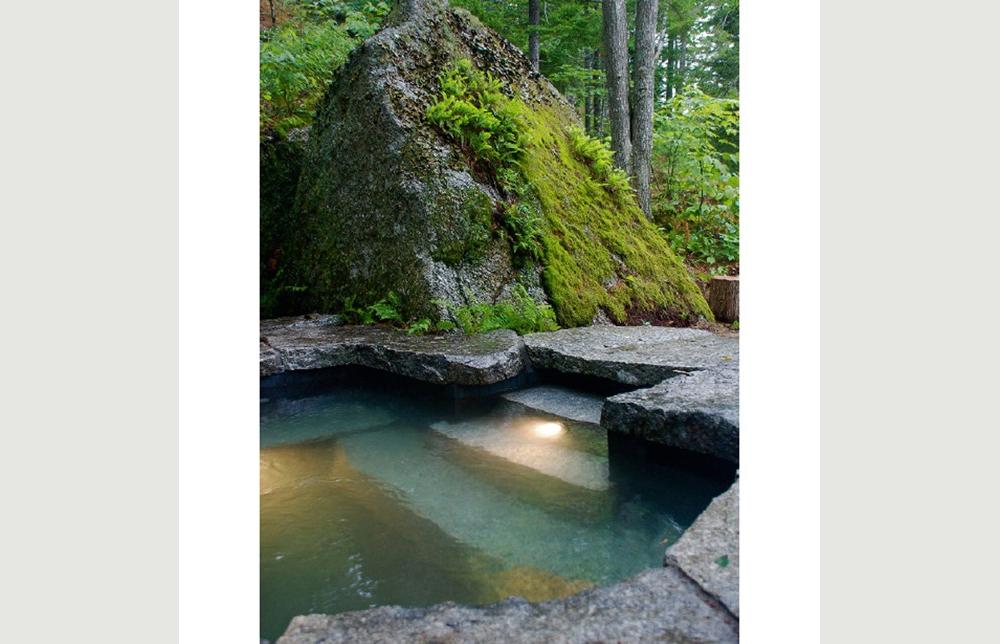 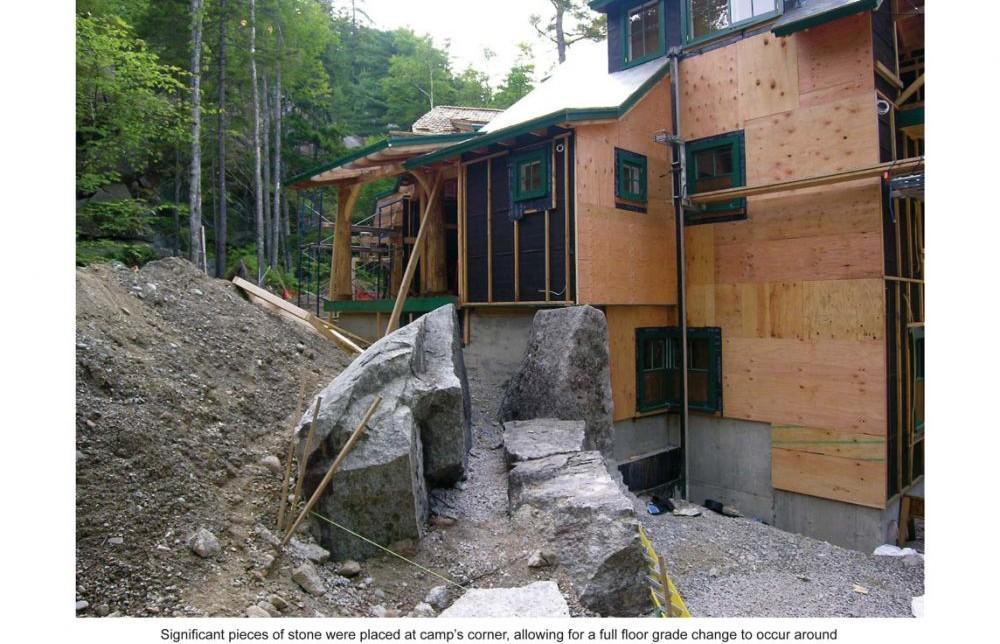 Given this projects primary goal of drawing on the inherent qualities of site to establish a rustic New England Lakeside Retreat, the site was carefully chosen for its confluence of several significant natural features and themes. The 369-acre site is heavily wooded with a mix of hardwood and softwood species and a light density of native understory trees, shrubs, and ground coverscreating a dappled green woodland with a navigable forest floor, through which glimpses of the water may be seen. The lakes remote and undeveloped qualities are highlighted by the dramatic stone boulders and ledge cliffs which tumble to its shores. The camp is sited on a small cove. It sits between a stream to the south that trickles across the forest floor and fans out into rich wetland flats, and steep granite cliffs to the north which fall directly to the water. Nestled between these features, the camp is tucked into a small slope where the ledge ridge pulls away from the waters edge, leaving enormous broken boulders draped in moss and ferns.

The design intent for all aspects of the projectfrom camp siting to infrastructural engineering and landscape designwas simple: to “surgically insert” the new camp and its associated needs into the existing landscape while protecting, maintaining, and building upon its special qualities and features. To achieve this end of both conserving and amplifying the key existing site features it was important to fully understand the landscapes characteristics and spirit to ensure that the proposed improvements would be firmly rooted in the present condition. The firms intent was to provide experiences through exemplary design which would establish reciprocity withand create a closeness tothe site. In doing so, the Camp would truly become a place of reflection, recreation, and celebrationfor the family and their guests.

Within the framework of this special site and specific design intent, the landscape architect was charged with a wide spectrum of tasks: to establish access to the project site almost a mile from the nearest existing gravel road, to site buildings and structures, and to provide for the necessary utilities and infrastructure to support the camp. Within the lakeside precinct of the camp proper, the landscape architect planned, designed, and implemented spaces and facilities for numerous outdoor land- and water-based uses.

To deliver on these tasks, the firm provided a comprehensive set of site and landscape architectural design, permitting, documentation, and construction administration services as an integrated part of a collaborative team. In conjunction with surveyors, attorneys, and environmental specialists, the firm played an important role in the earliest phases of the projectassessing and identifying the opportunities and constraints associated with the property before it was formally purchased. The firm then coordinated permitting and approval efforts at both the local and state levels. Once purchased and permitted, the firm planned and coordinated site access and utilities infrastructure, including layout for a woodland access road and power, septic, and well services. These efforts were complicated by the remoteness of the site and site constraints such as an abundance of ledge, steep slopes, and wet areas. To support the overarching project goal of creating a rustic environment, a decision was made to hide modern infrastructure wherever possible, and a combination of above where necessary and below ground when practical utilities was implemented to meet this goal within the framework of the challenging site.

The firms planning and design efforts included working closely with the project architects on location during development of the main camp. Additionally, the firm provided planning, permitting, design, documentation, and administration services for the siting of a guest camp, landscape restoration associated with a secondary cabin accessible only by boat, establishment of a trail network, a spa and outdoor shower, a woodland fire pit, an educational garden, a suspended footbridge, waterfront areas including docks, floats, and a swimming rock, as well as several outdoor seating/gathering areas.

The significance of this project lies in the noteworthy efforts to conserve and integrate emblematic features of the existing landscape into the projects planning, design, and implementation. Large mature trees, massive mossy boulders, striking ledge outcroppings, glades of ferns, drifts of shrubs, and key views were all carefully noted, inventoried, and preserved early in the design process. The level of detail in inventorying these elements before construction began, the education of the client/design/construction team as to the value of conserving them, and the methods employed in protecting these resources during construction were all critical to the projects successful outcome. Several examples of this include: protecting tree trunks and root zones throughout the site to limit construction effects and ensure that the future camp would “float” among large, healthy, existing trees; tying back small saplings and overhanging tree limbs along the newly created access road during construction in order to avoid damage to these elements and preserve the finished quality and enclosed scale of the woodland road when complete while still allowing for temporary access at a much larger scale; and placing burlap over key vegetated boulders and providing irrigation to them during construction to preserve the lichens and mosses growing there from physical harm or harsh micro-climatic conditions caused by a temporarily “open” job site.

In places where construction or past use had negatively impacted the landscape, a “restoration effort” was mounted, integrating new with old. Revegetation efforts used a palette of plant species from the sitesometimes using actual transplanted groundcover mats and sapling standsand planted these species in complex naturalloccurring combinations and compositions. Blueberry and huckleberry sods, rhodora, sheep laurel, a multitude of fern species, bunchberry, yellow birch, red oak, maples, spruce, and viburnum were planted in masses and drifts as they would appear in the natural surroundings. To support this restoration effort, a team of native plant experts from a regional botanical garden assisted in transplanting an array of native plant species from the larger site into a native plant identification garden close to the camp. These specimens were then labeled so that the clients family, their children, and guests could become familiar with the plants commonly found throughout the property.

Another tool for stitching the proposed into the existing was the introduction of landscape-scale stones whose size, shape, grain, color, and patina were carefully matched to the site by sourcing new stone from old quarry tailings in a nearby granite pit. “New stone” was introduced to integrate the camp into the surrounding landscape by placing significantly sized boulders and stone pieces in key locationsliterally “rooting” the architecture in the landscape by arranging the stone in ways that replicate the geological history already evident on the site. This effort is illustrated in the placement of massive fingers of stone in a radiating pattern extending out from the southwest corner of the camp. The resulting impression is that the camp was built into this ledge, rather than the other way around. In another example, the siting and design of the spa grew out of the idea of water filling a void where a boulder may have lain. By painstakingly preserving a pocket of large boulders off the back of the camp during construction, using native stone in and around this area, and strategically setting additional weathered boulders tumbling into the spa void, the “boulder hole” concept is achieved.

Finally, once mats of native vegetation were introduced to stitch together the seam between new and old across the site, the rustic Lakeside Retreat was effectively anchored to the landscape and the story of site preservation and amplification was completed.