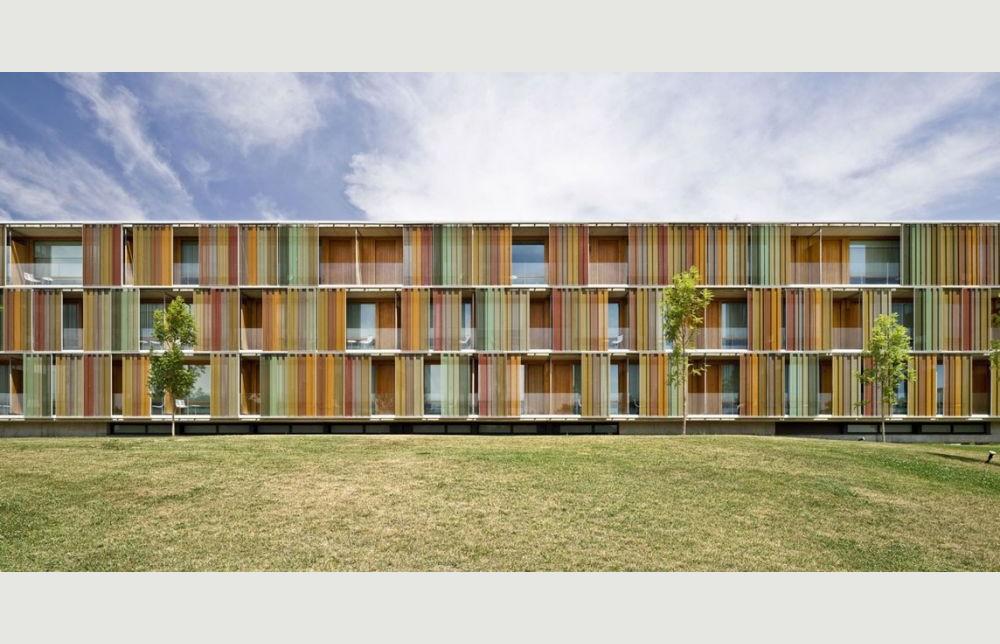 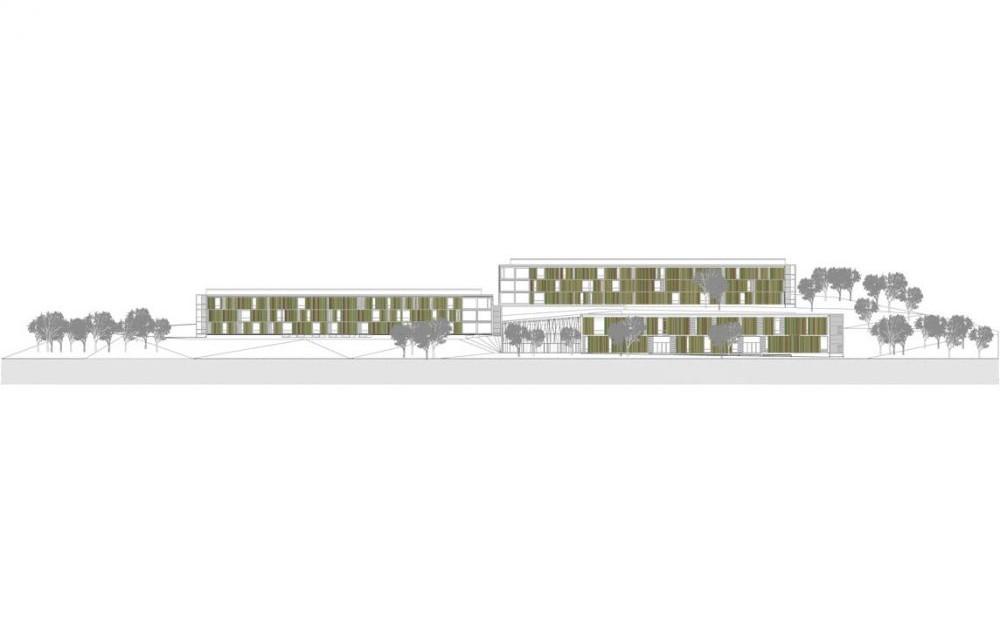 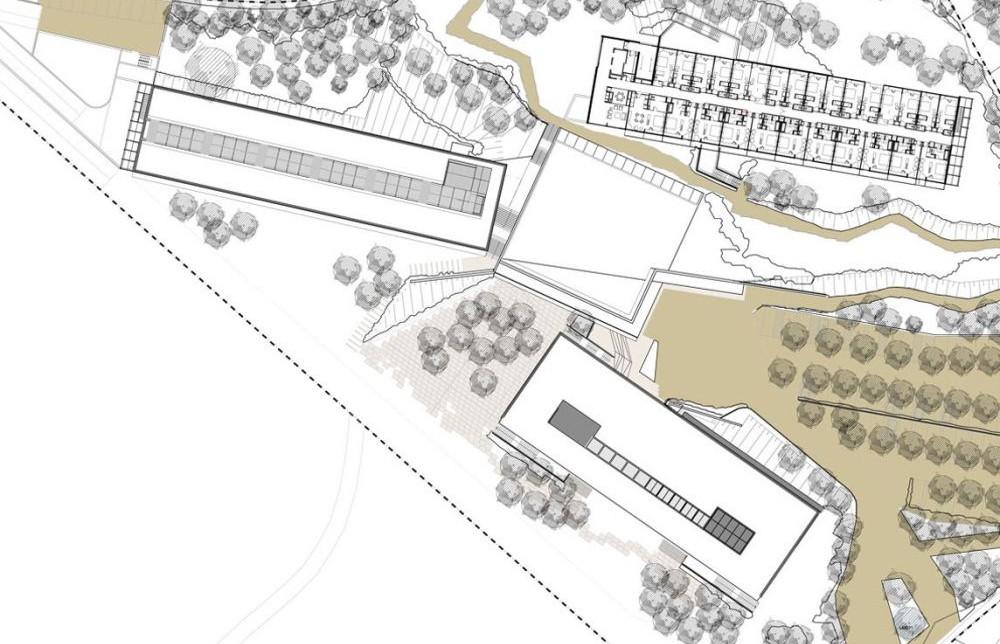 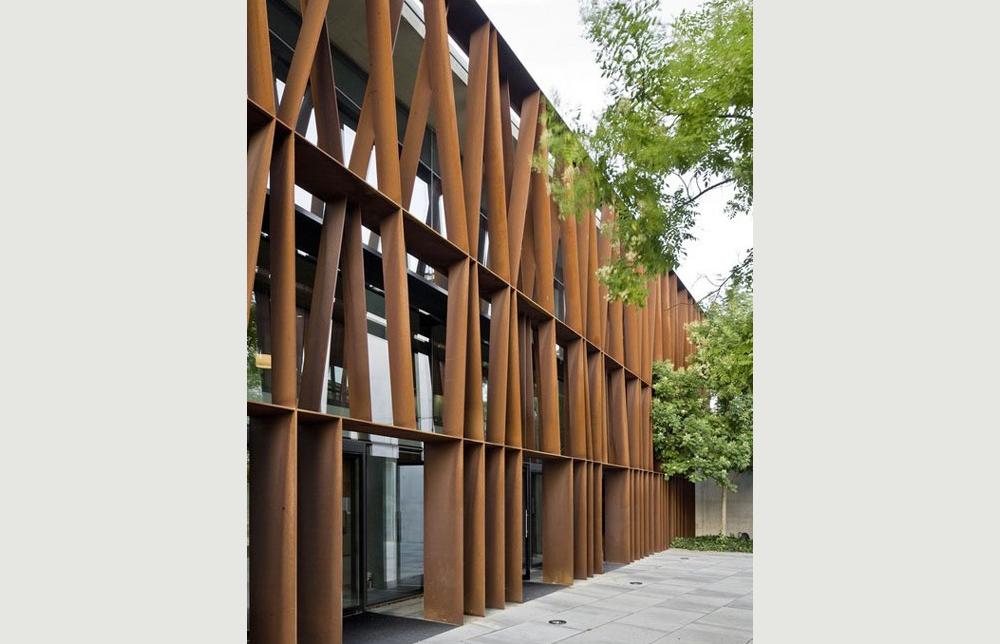 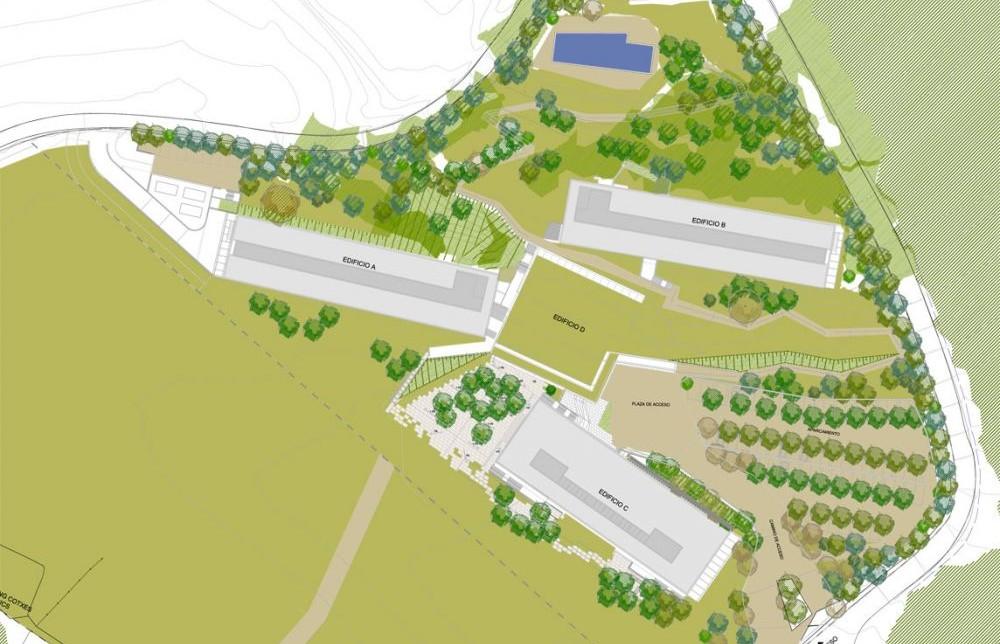 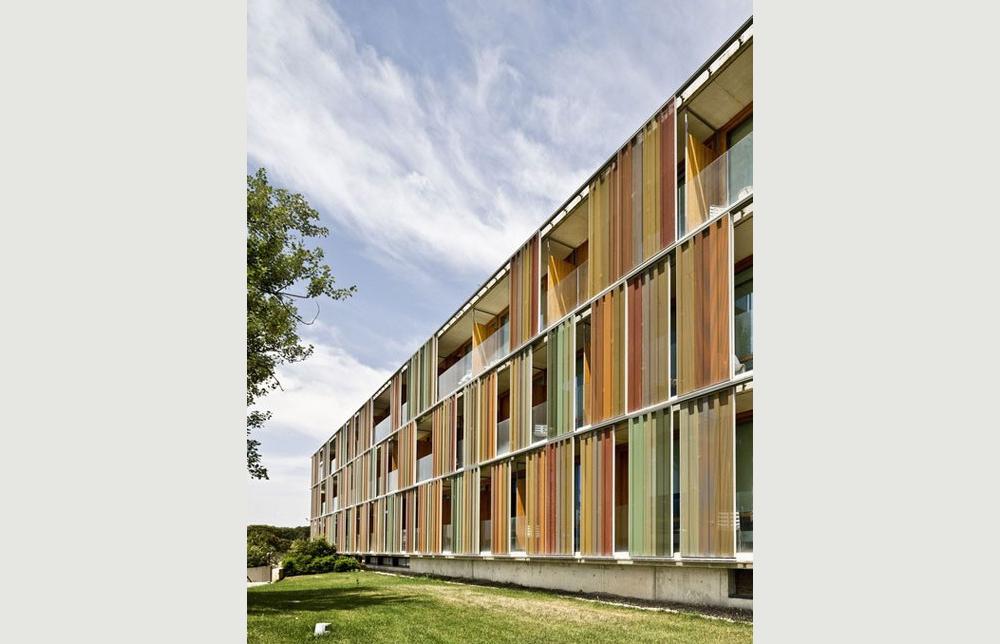 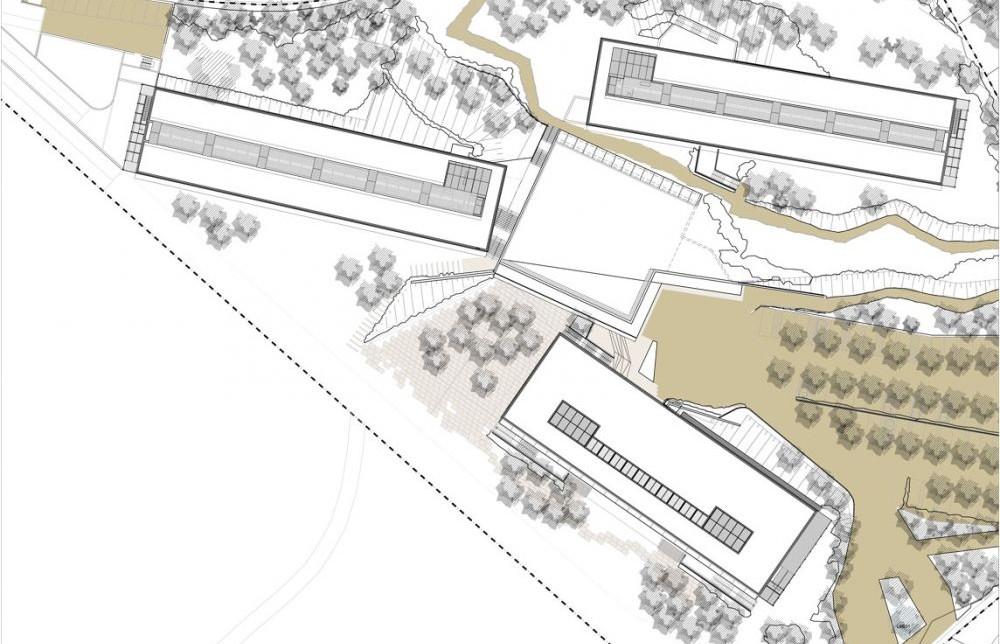 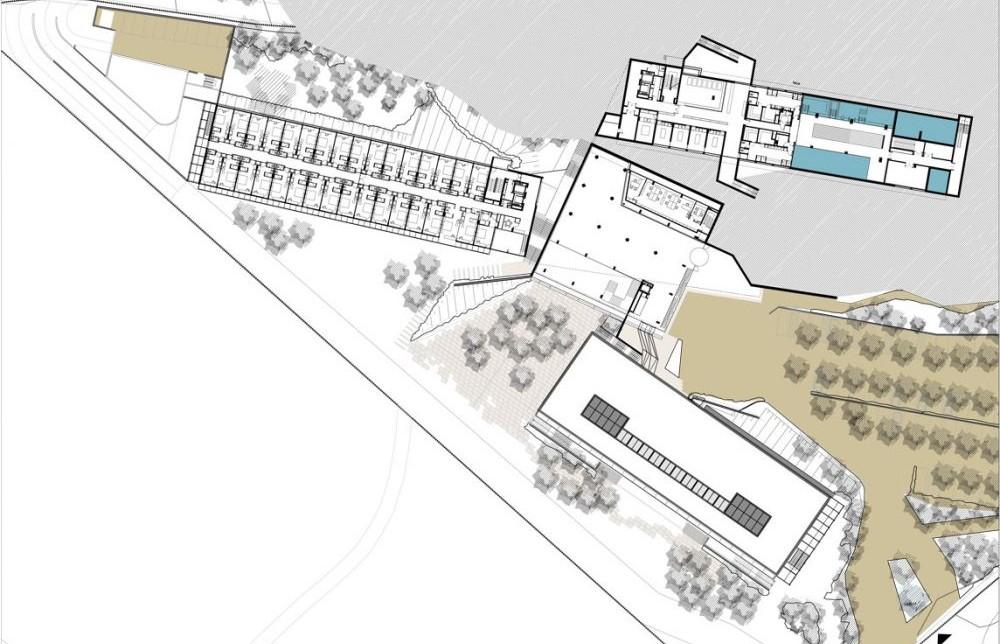 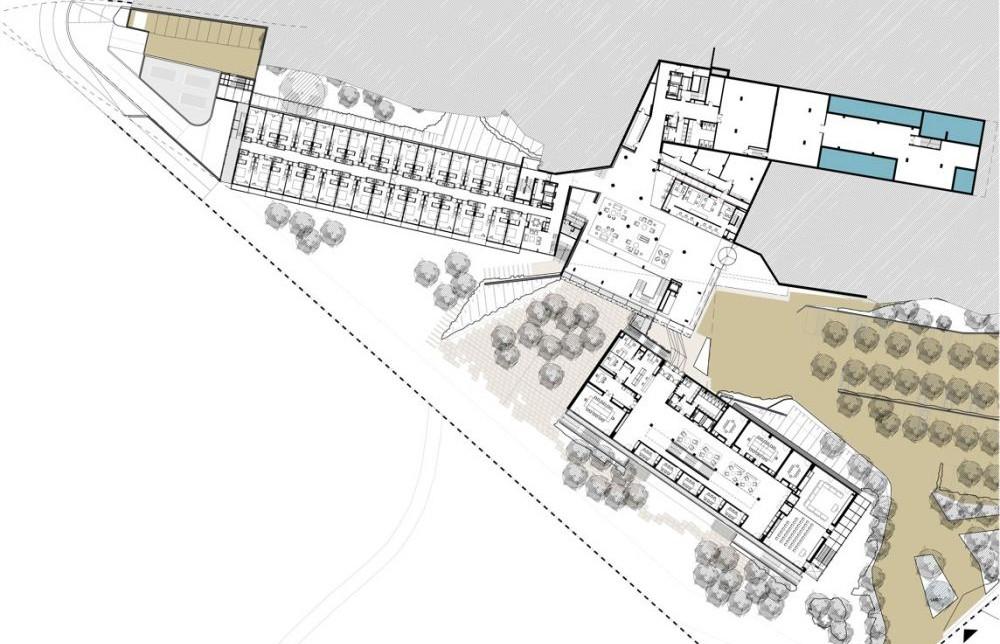 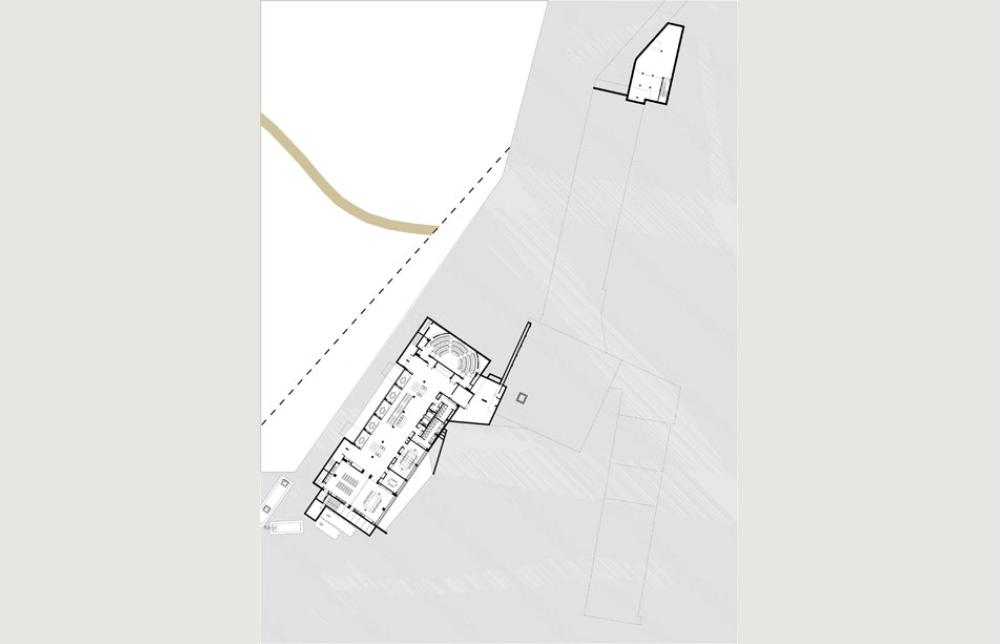 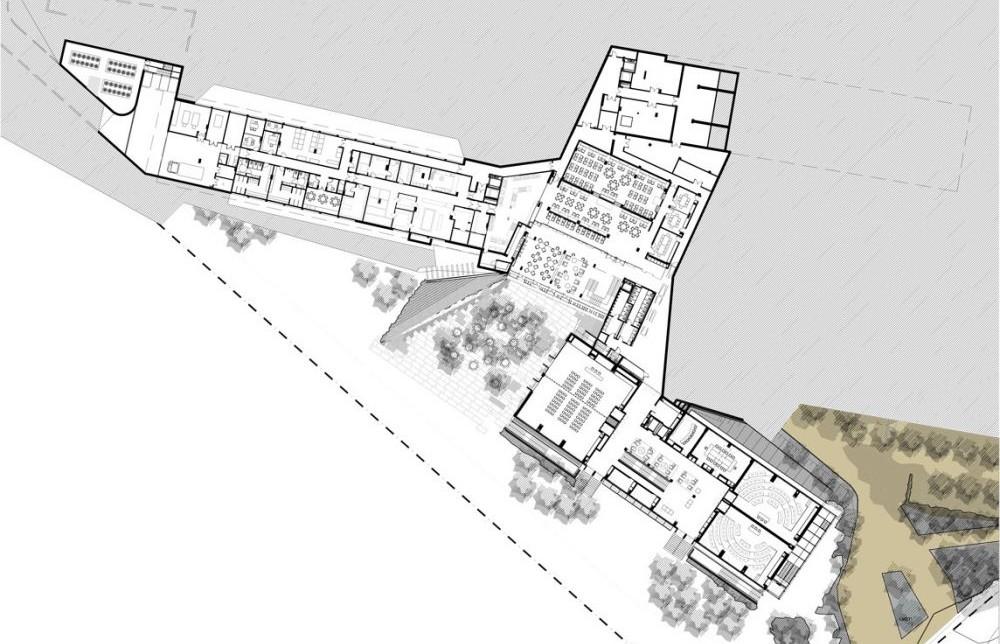 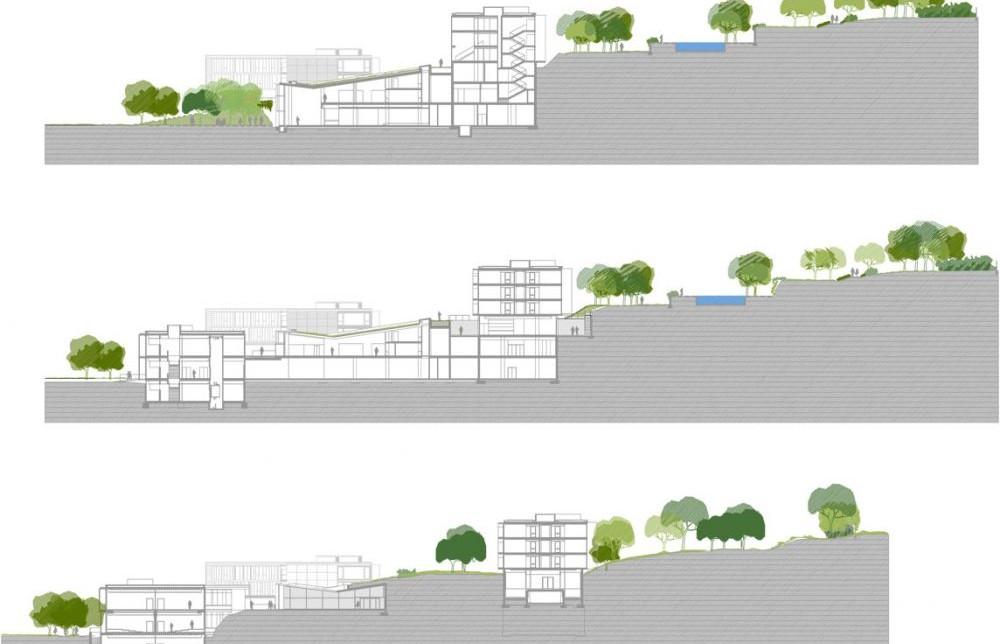 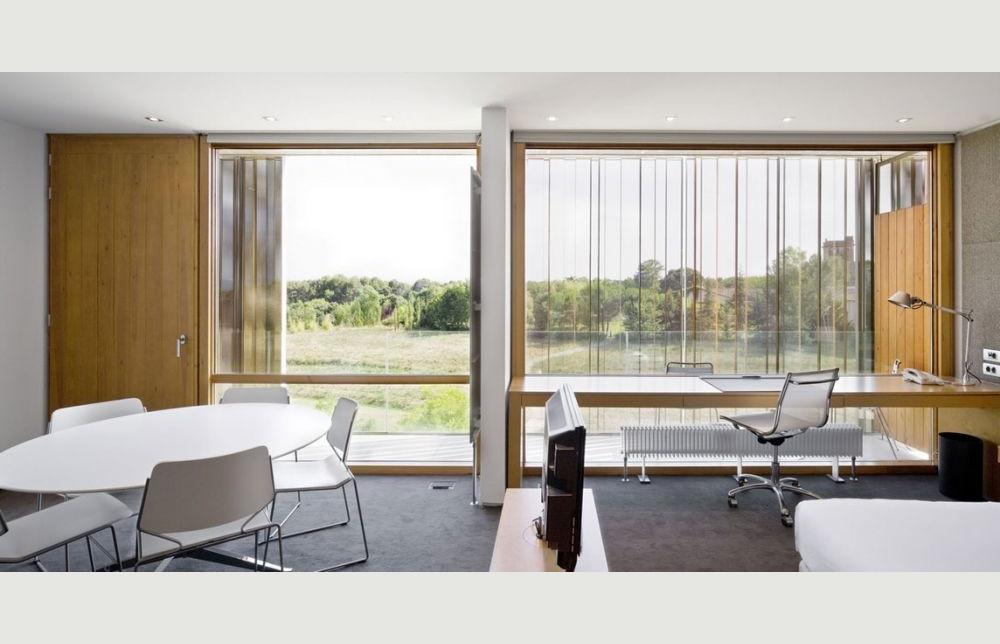 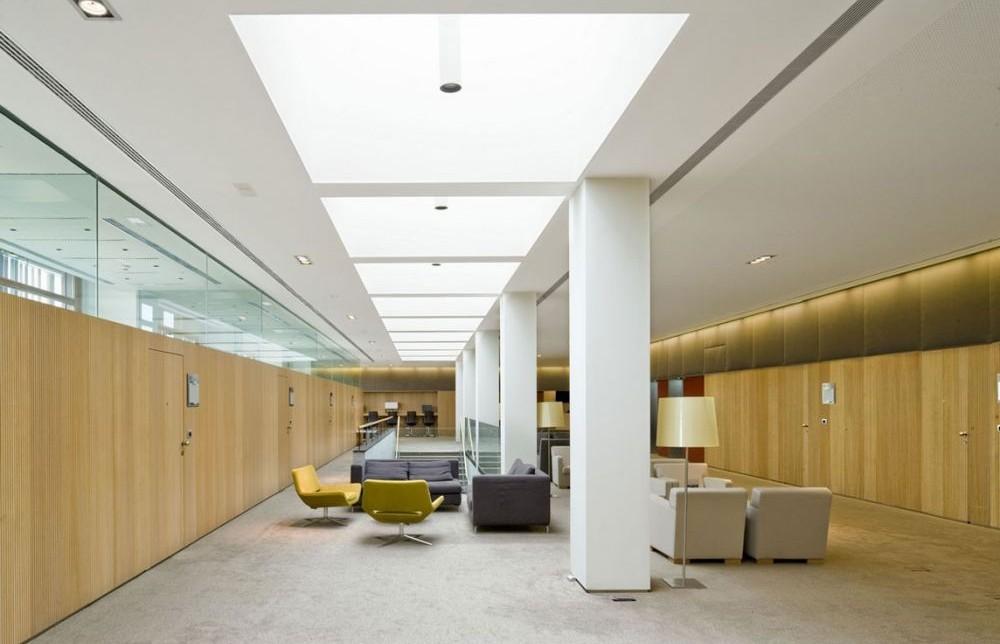 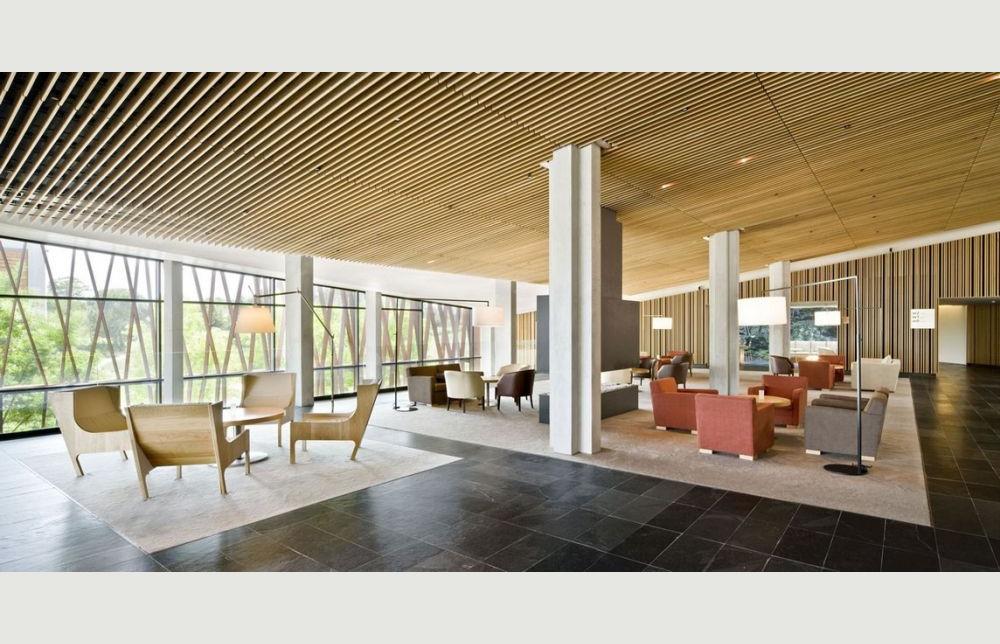 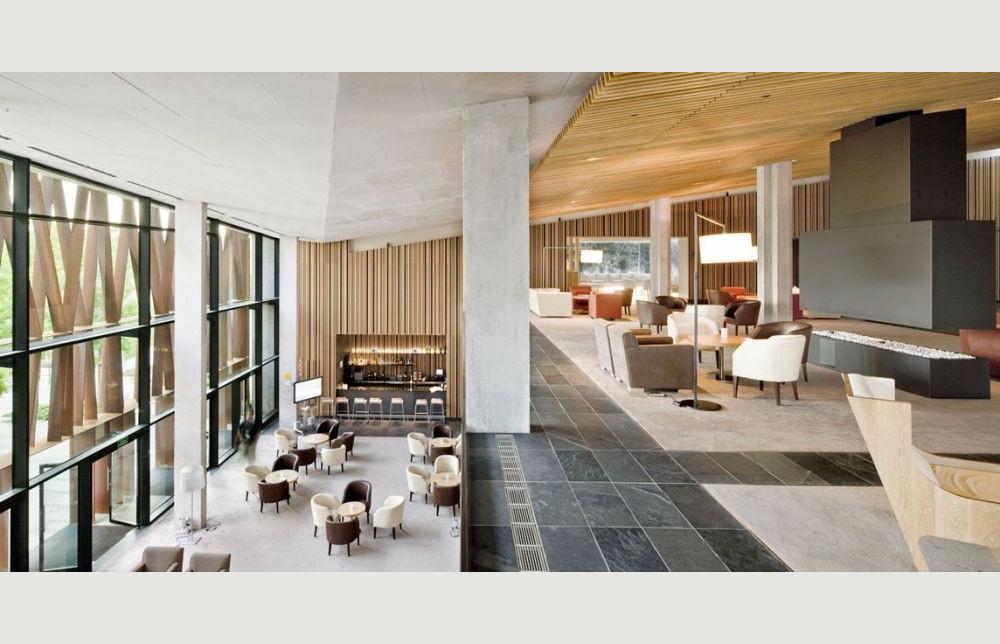 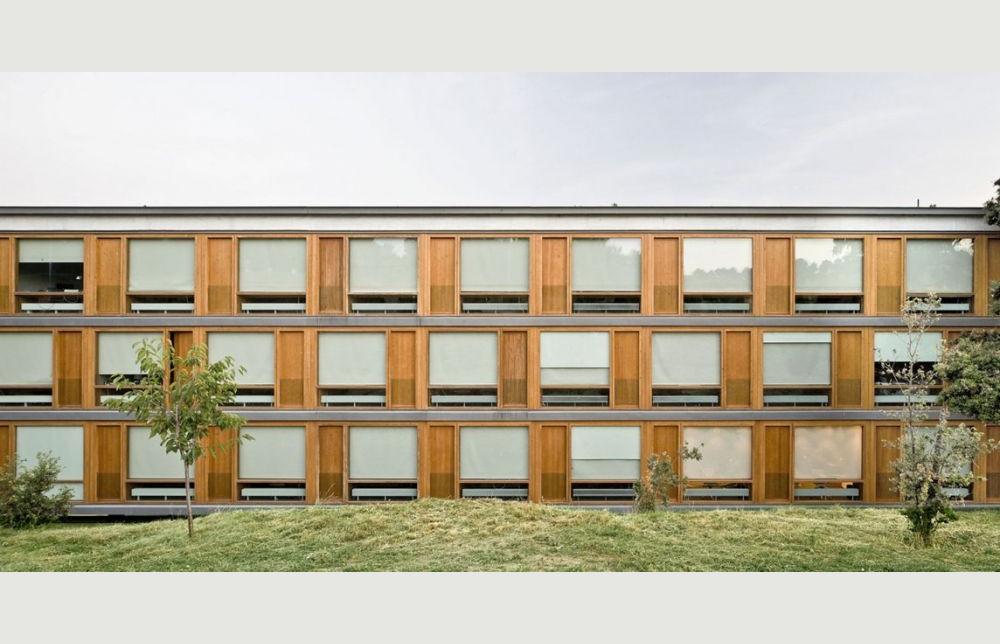 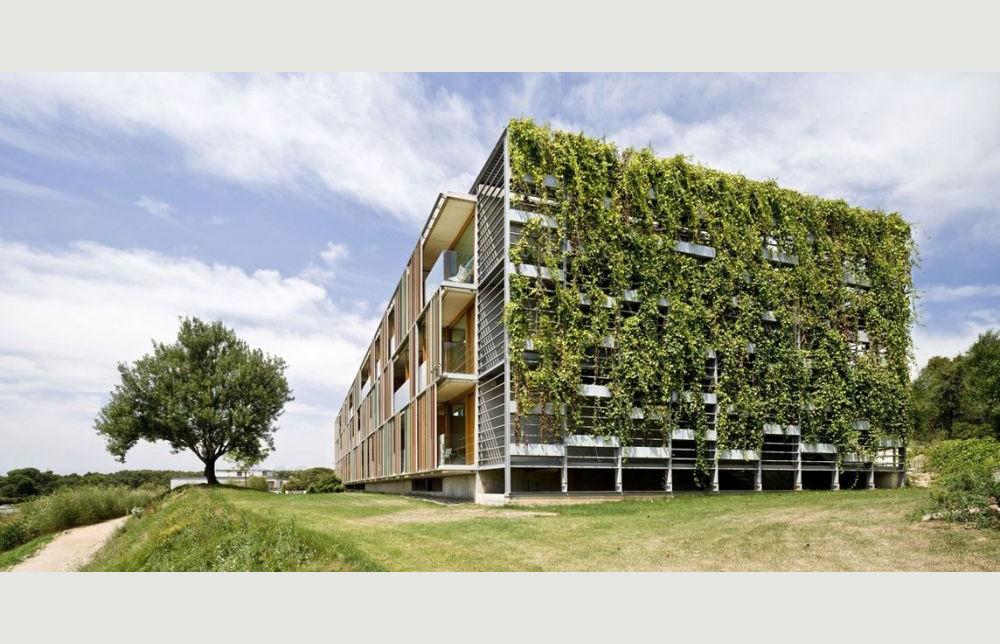 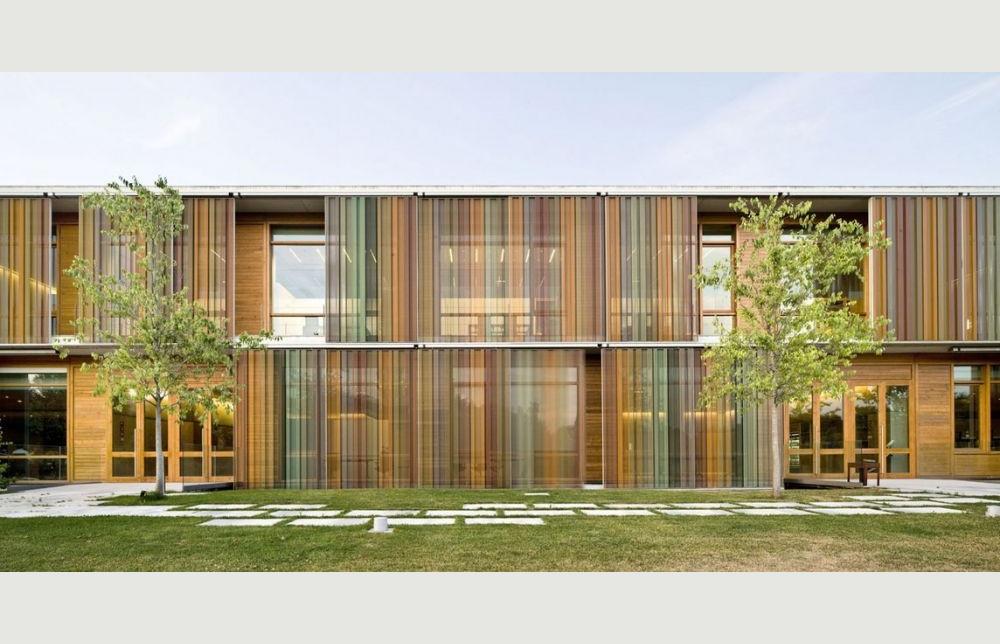 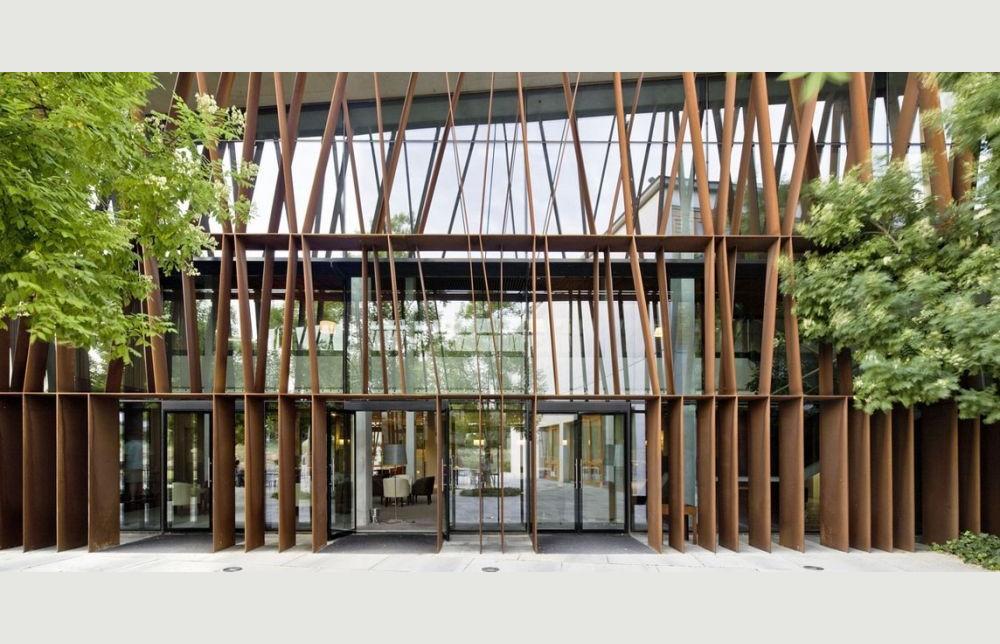 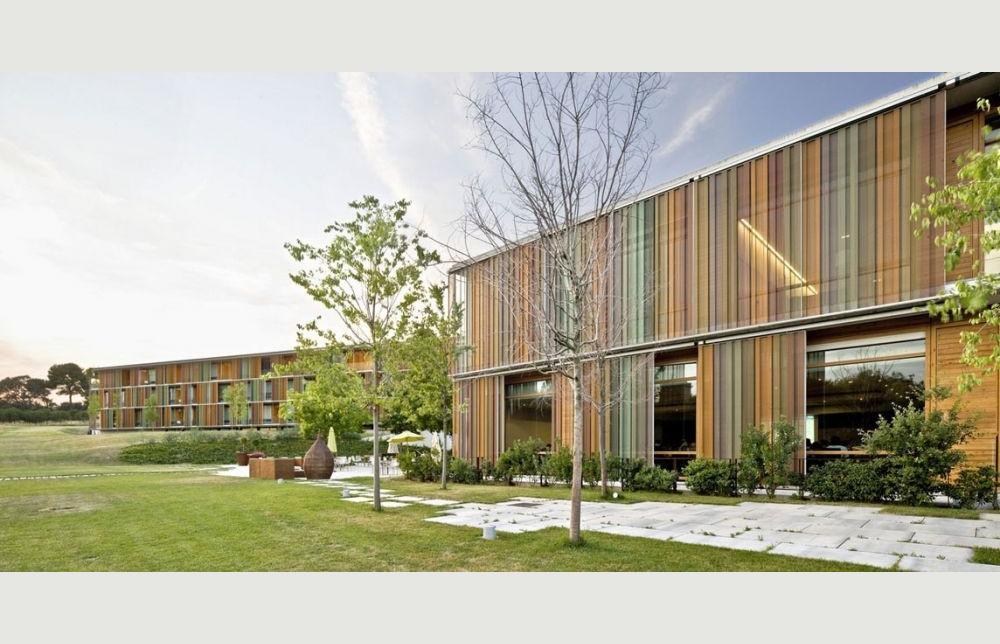 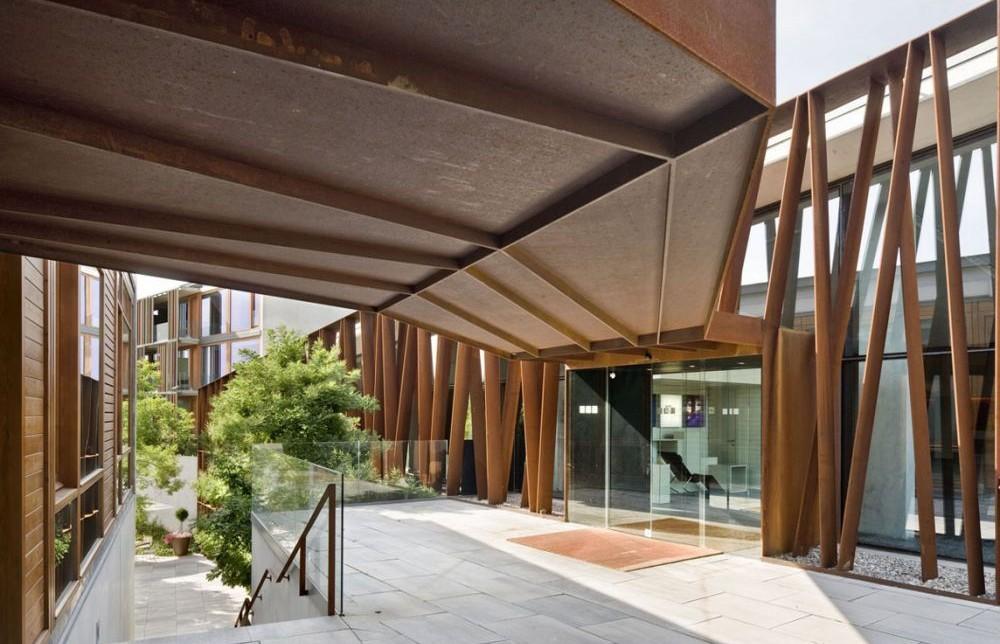 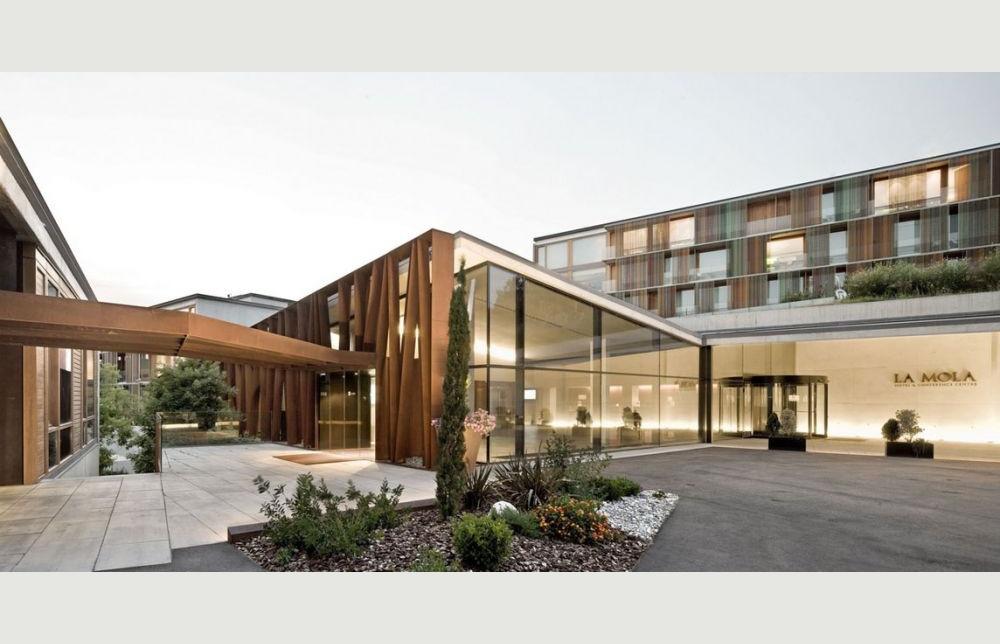 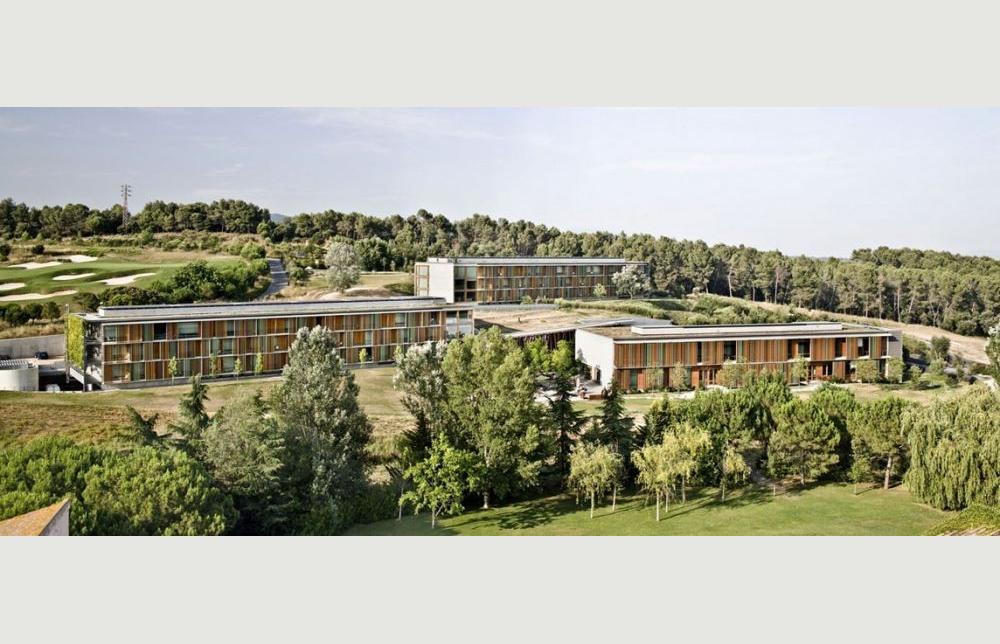 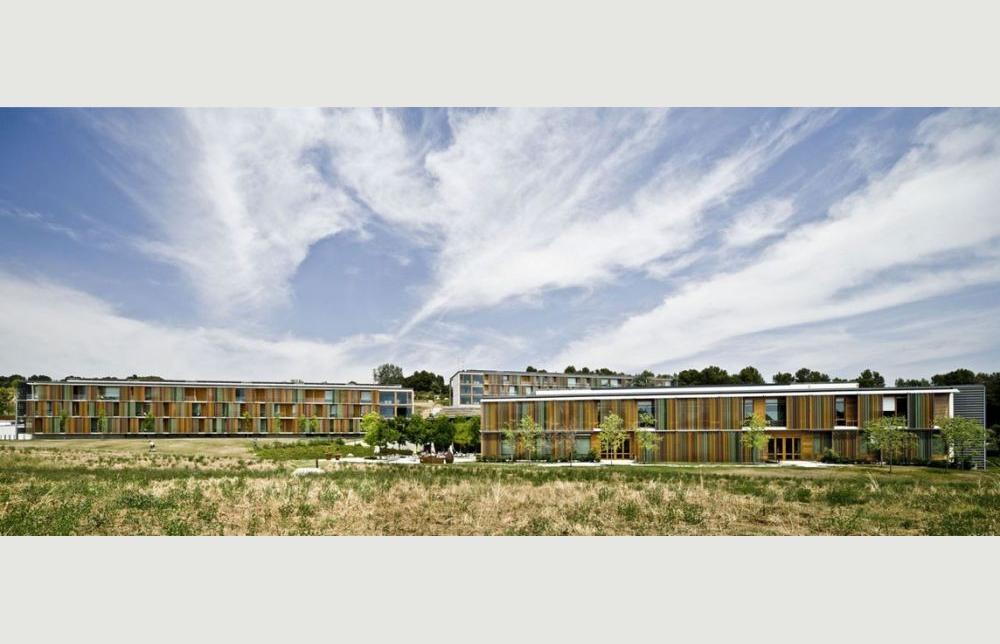 In a location trapped between a golf course and a forest, a considerable building volume is distributed. Three pavilions scattered on the hillside with strict rationality solve a functional program for low interpretations. The link between them is provided by a semi buried body that takes more formal freedom and that is protected from the sun with a lattice tree. The colour becomes a contextualized mechanism that, far from seeking to camouflage, it proposes an artificially conscious emulation on an unnatural support in an intentional correlation with the nature of the forest and the artificial nature of golf.
La Mola Hotel and Conference Centre is located on a site adjacent to the new El Prat Golf Club, in the natural reserve of Sant Lloren de Munt I lObac Terrassa. The project involves the construction of a hotel complex of 186 rooms with complementary services, meeting and convention spaces, auditoriums, multipurpose rooms and other services related to health and wellness spa area, fitness, etc..
To avoid the strong visual impact that a complex of such dimensions could cause in this environment, it has been chosen to split the program into four prismatic buildings which dont exceed in height the surrounding forests, thereby a better implementation and integration is achieved.
Two of the volumes house the rooms settled out longitudinally along a central corridor on three floors above ground. There is also a living room in the entrance and several basements for complementary services kitchens, spa, etc.. The rooms on the south facade have balconies and a sunscreen formed by some mobile slides of perforated sheet designed as a large coloured curtain. Their tones and volumes are blending with the colour of the existing vegetation in an intentional game from an area located between a forest and the “artificial nature” of the golf course.
A third prismatic volume, similar but of greater height between floors, hosts the conventions centre. Inside there are several auditoriums, multipurpose rooms of varying size and multiple meeting spaces around a large open lobby, also with a ground floor directly communicated with the outside world, projecting uses as a conference centre to the outdoors. In a central position between these three volumes, there is a fourth building housing the common areas that function as an access core and general distributor of the complex. A sunshade formed by corten steel plates provides protection and privacy to its large glass facade at the same time evoking the landscape around it, thus becoming the main reference point for intervention.
La Mola Hotel and Conference Centre was proposed as an architectural design that respects the natural environment in which it is situated. Because of this, it was given special attention to the layout of the different volumes built. Thus, most of the trees of the place remained in its initial location and a lower part of them were transplanted. Furthermore, the plot was populated with trees to form a garden where irrigation is resolved entirely by the recycling of gray water generated in the centre.
Extensive areas of glass facades allow maximum use of natural light in winter while in summer the adjustment of various solar control systems prevents the overheating of the stays. Moreover, the system allows free cooling in a controlled way the favourable conditions of the outside air, thus reducing the need of artificial air conditioning. Solar panels located on the roofs of two buildings help to reduce energy consumption for the generation of hot water.
The predominant use of concrete, combined with pine wood closures and decks gardened, provides a whole unit making it a peaceful space, integrated into its surroundings. The outdoor areas have been addressed by creating paths and landscaped areas of rest and meeting that interconnect with each one of the buildings.