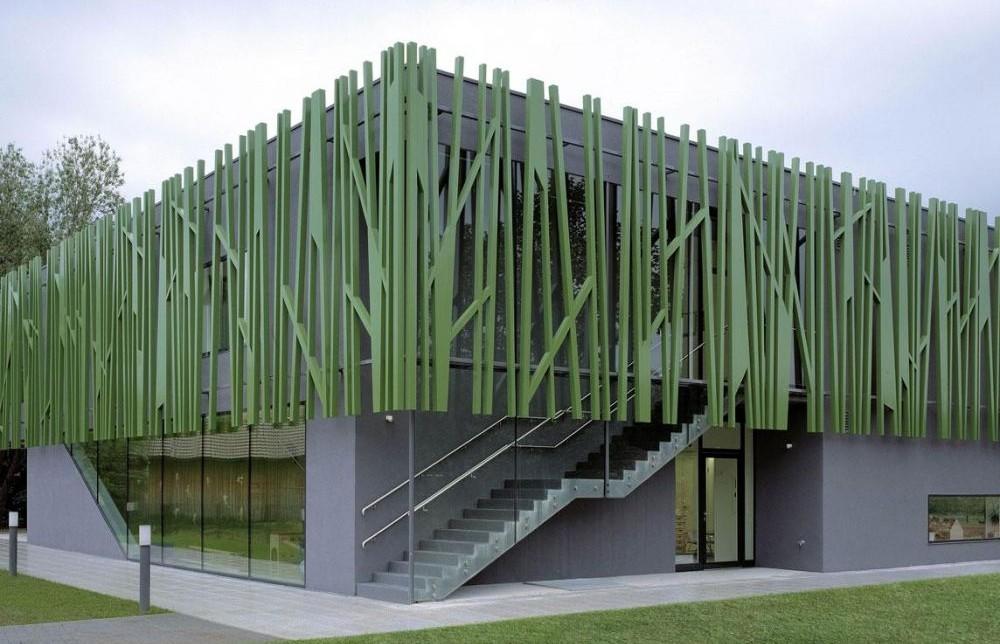 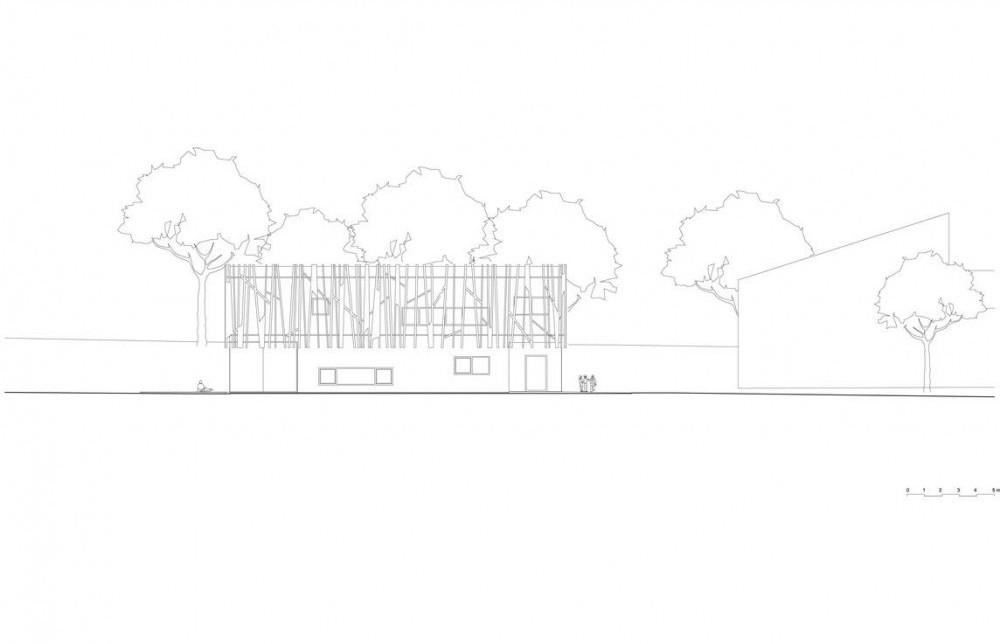 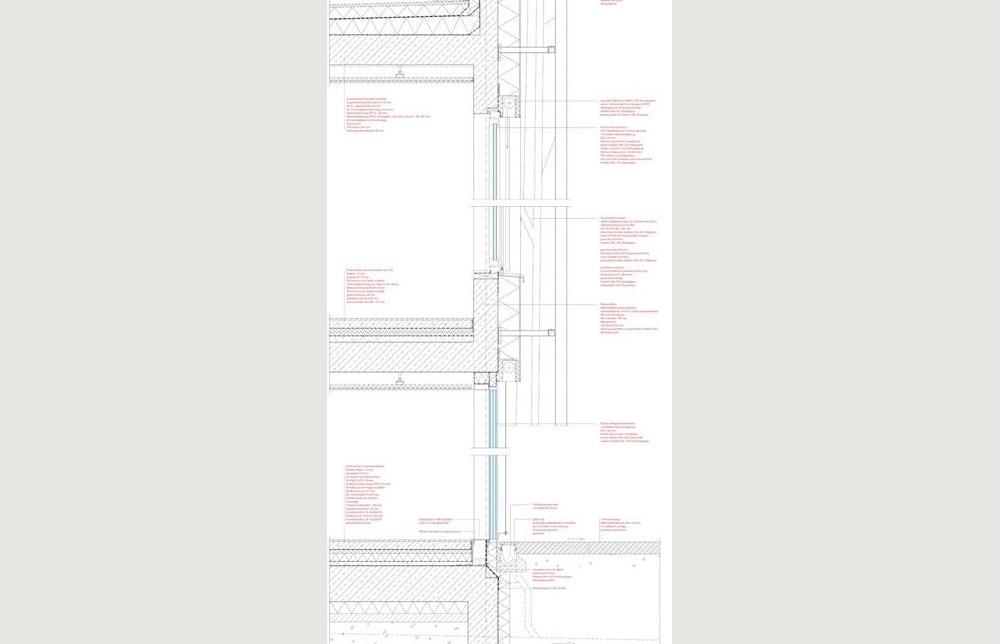 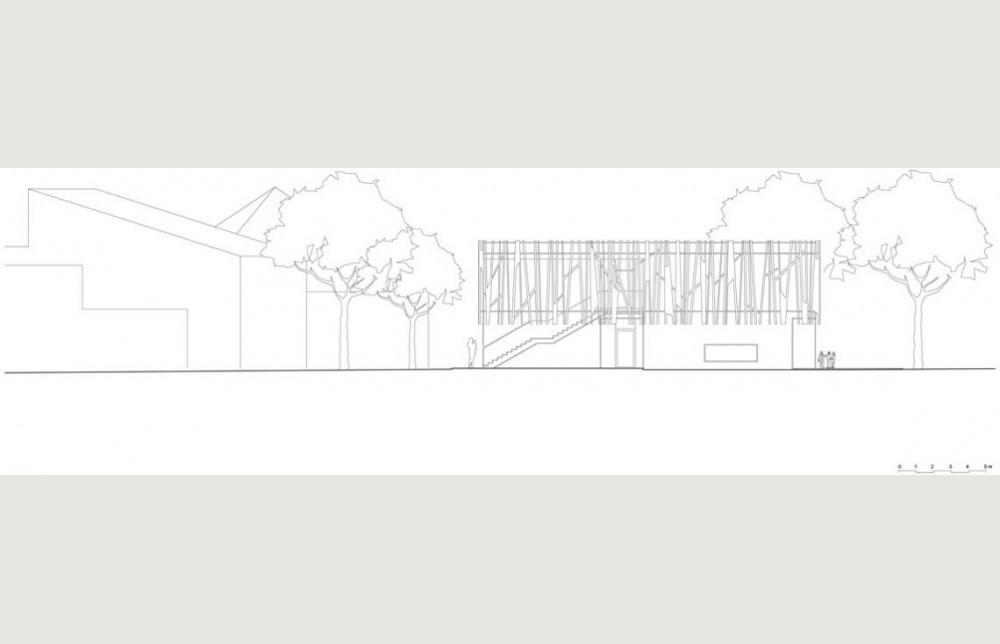 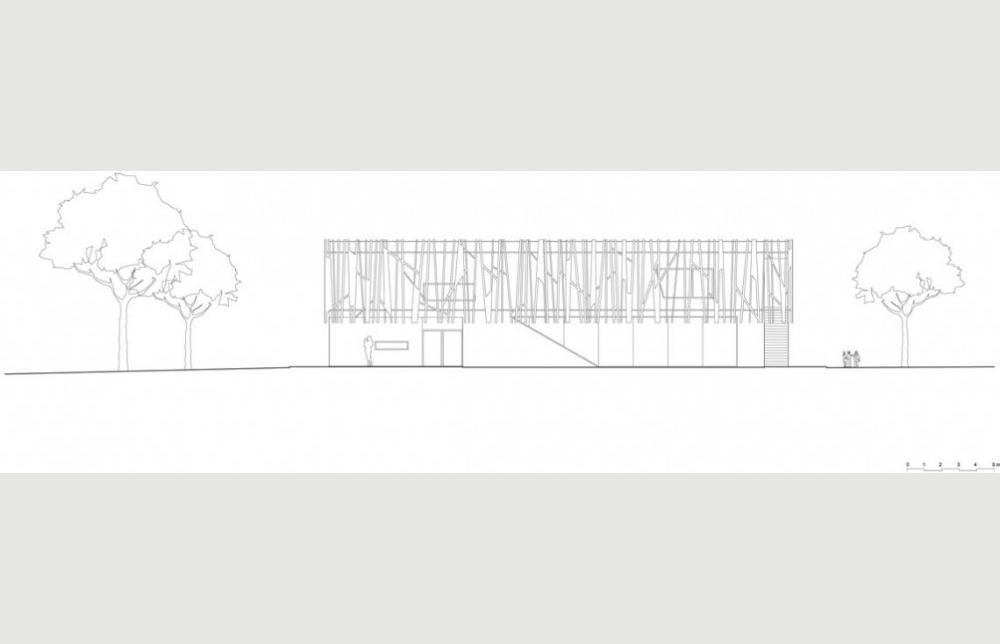 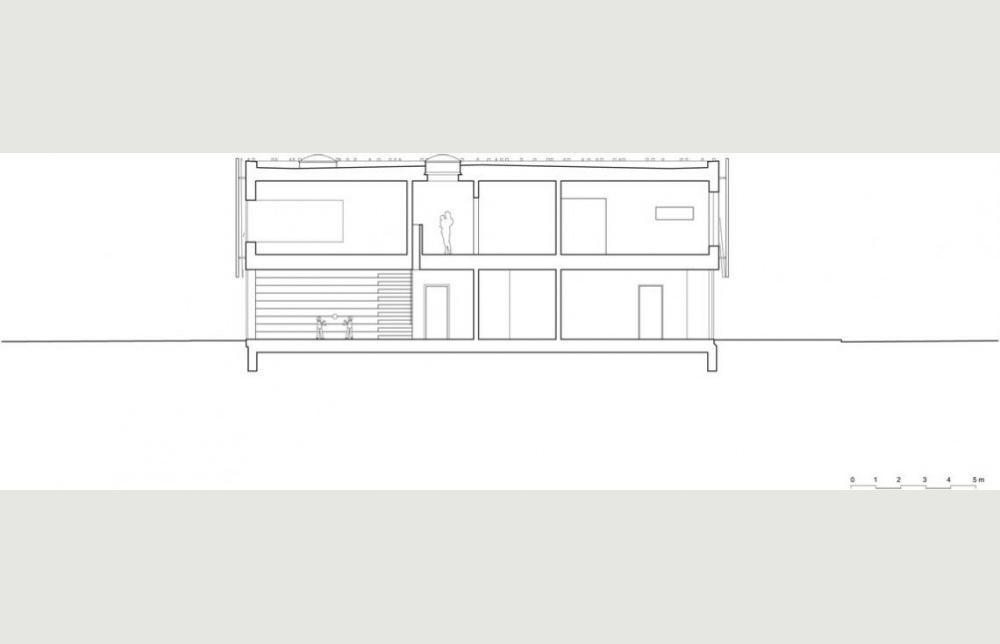 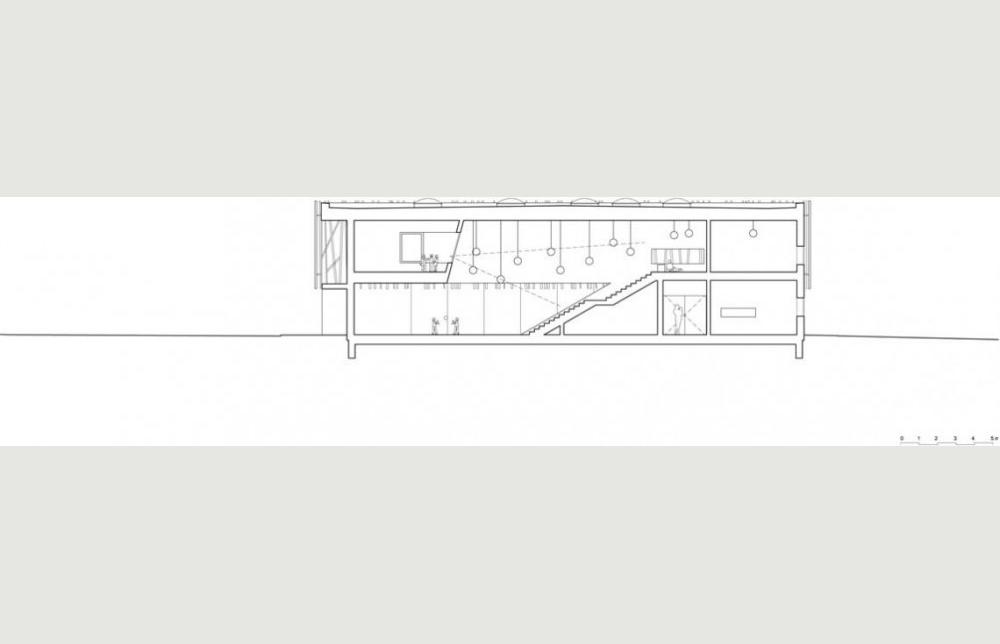 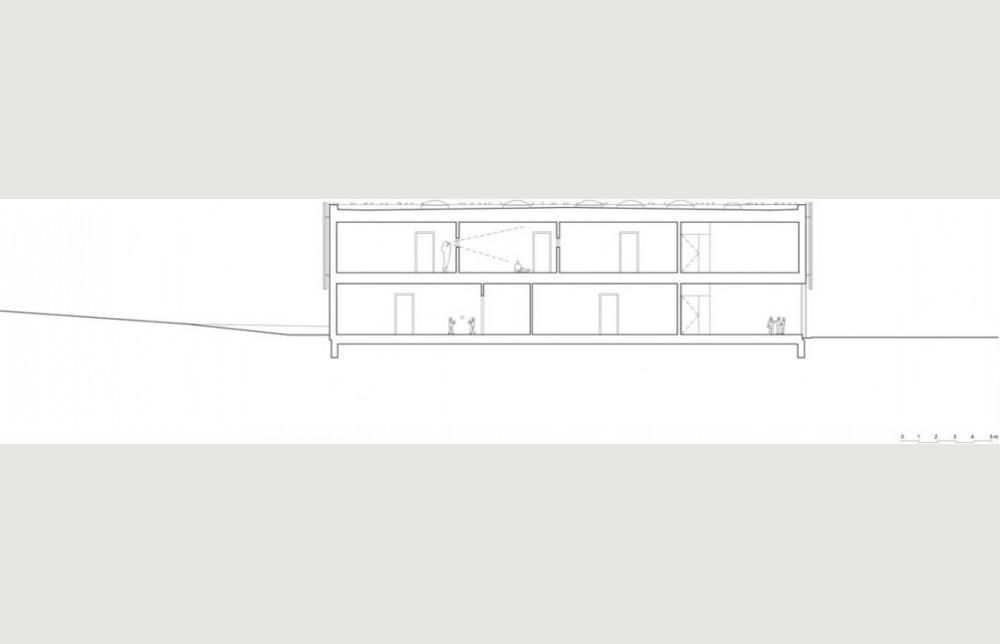 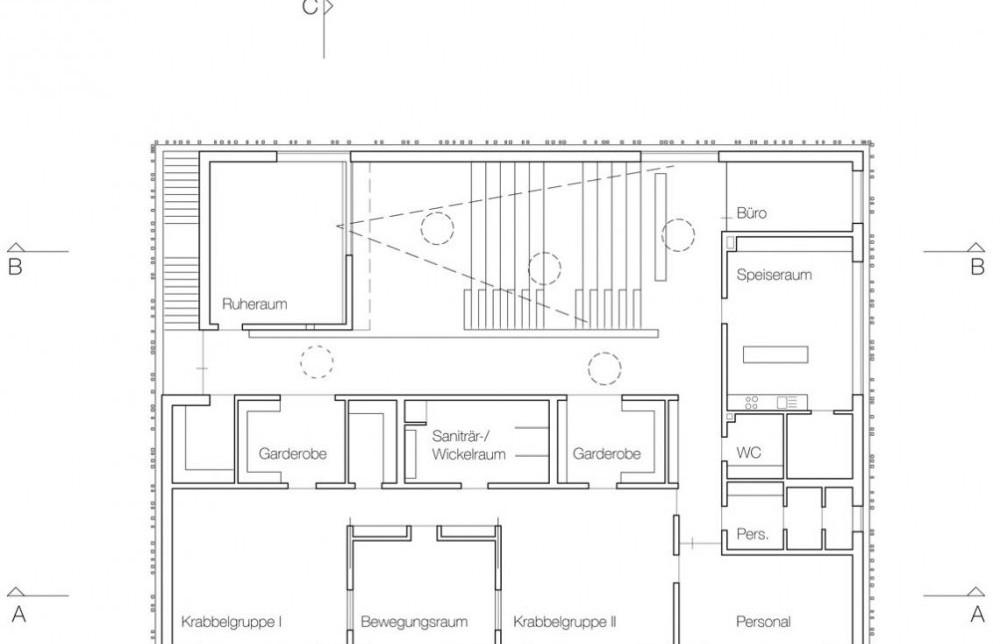 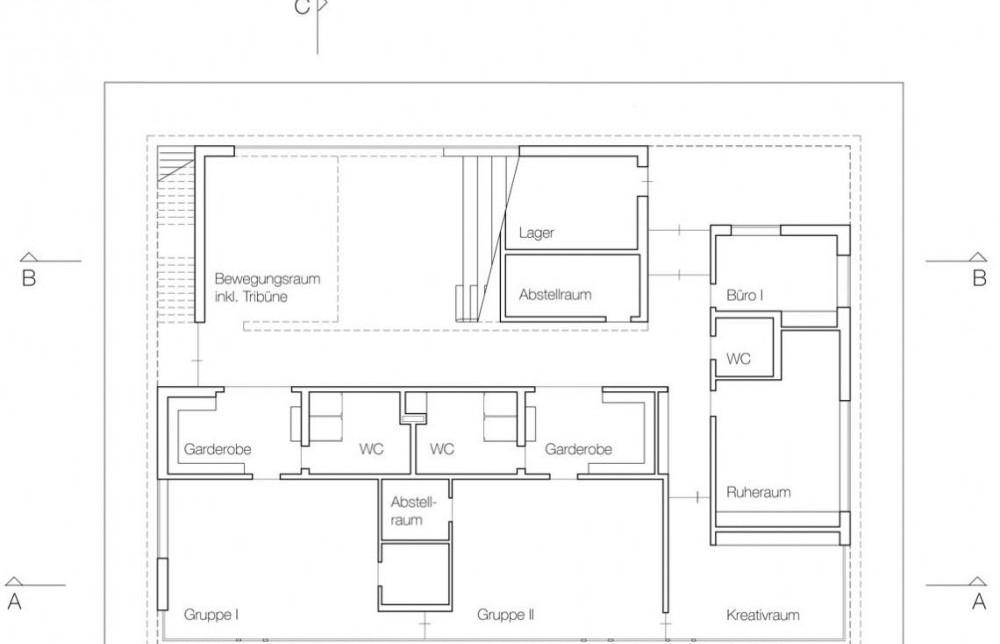 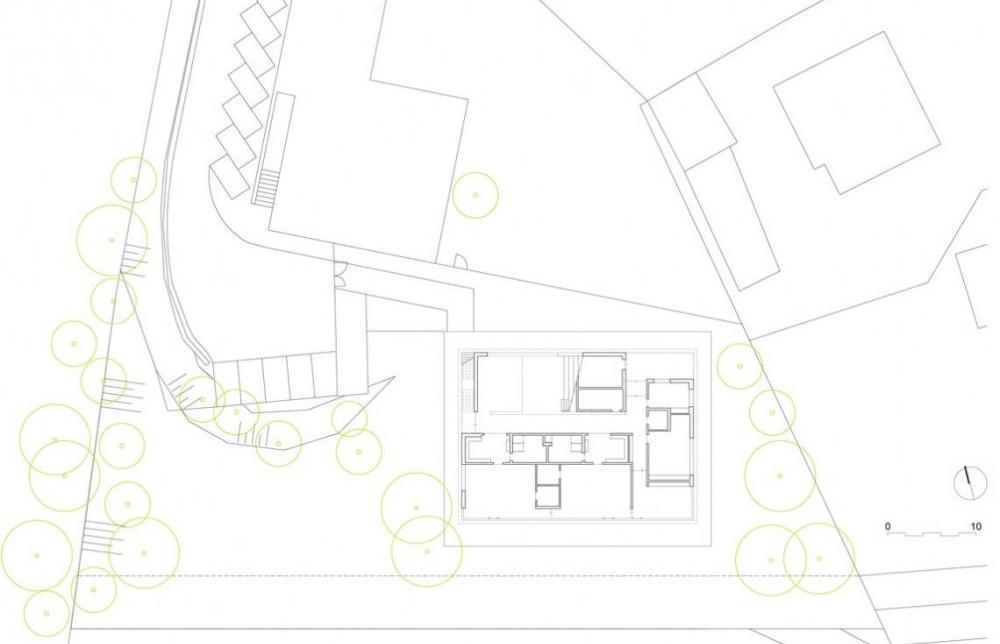 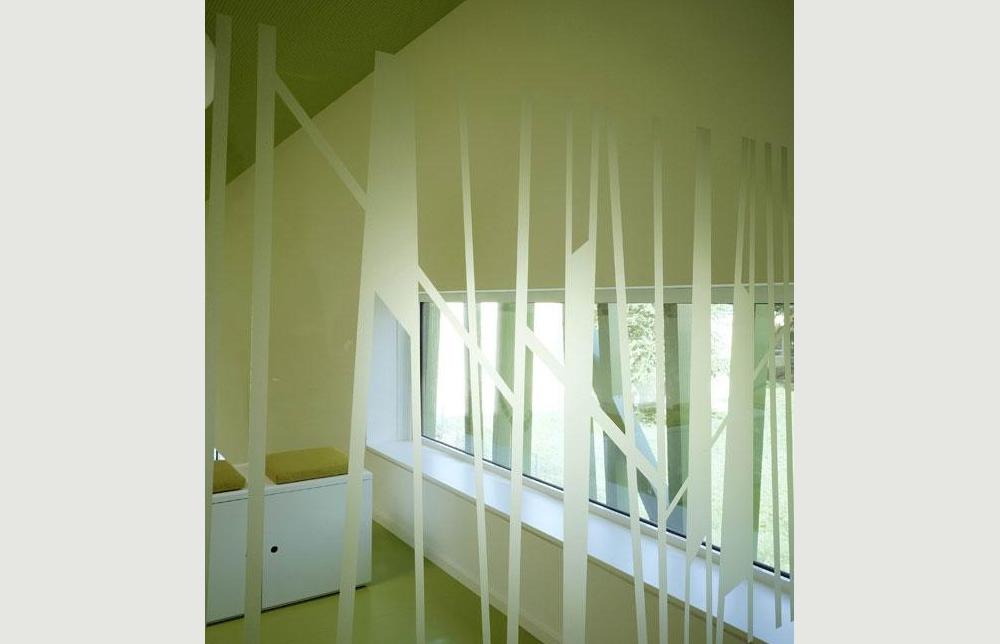 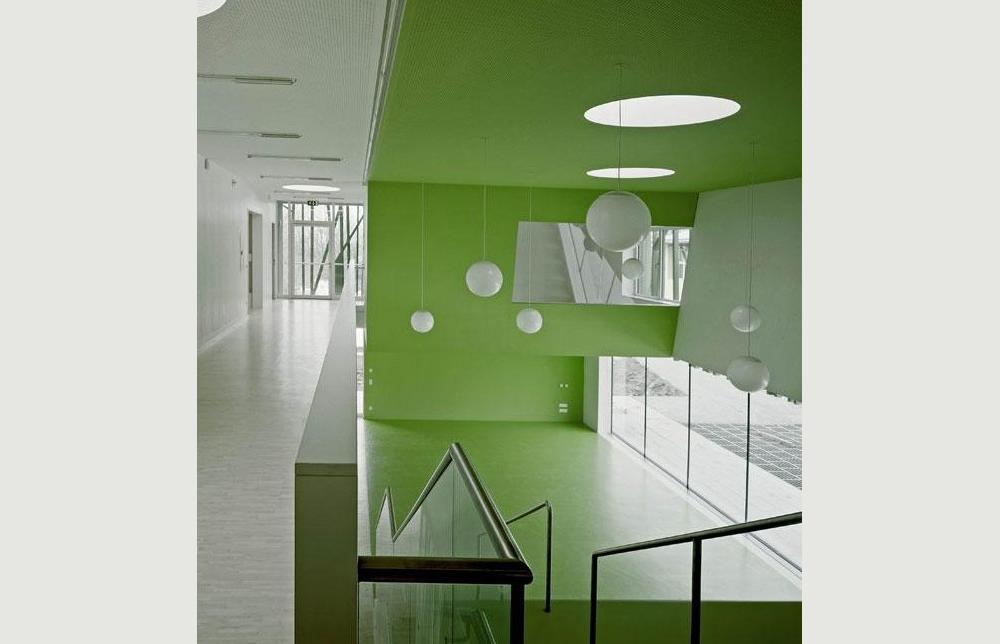 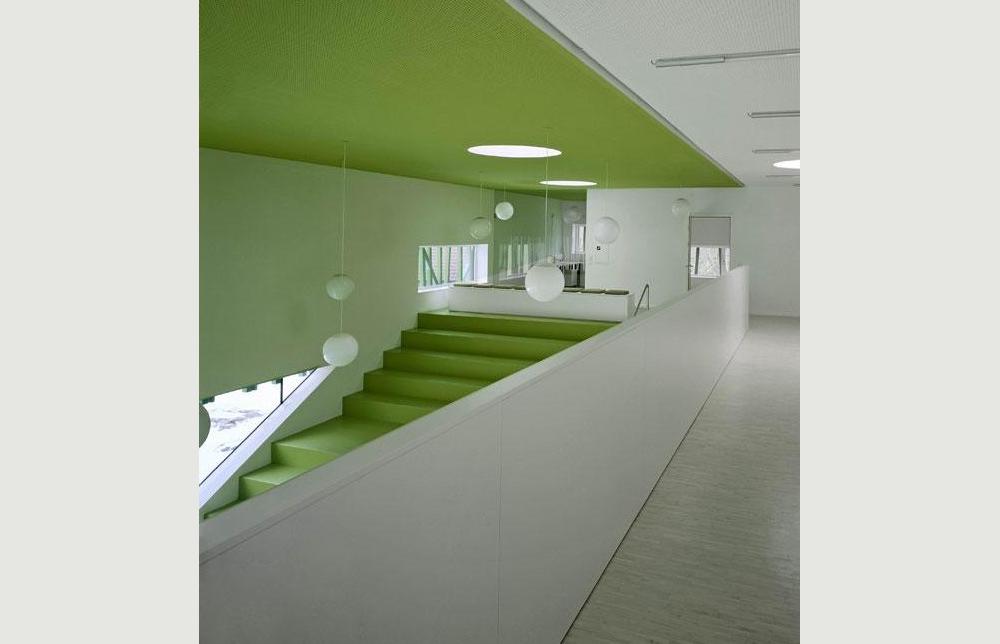 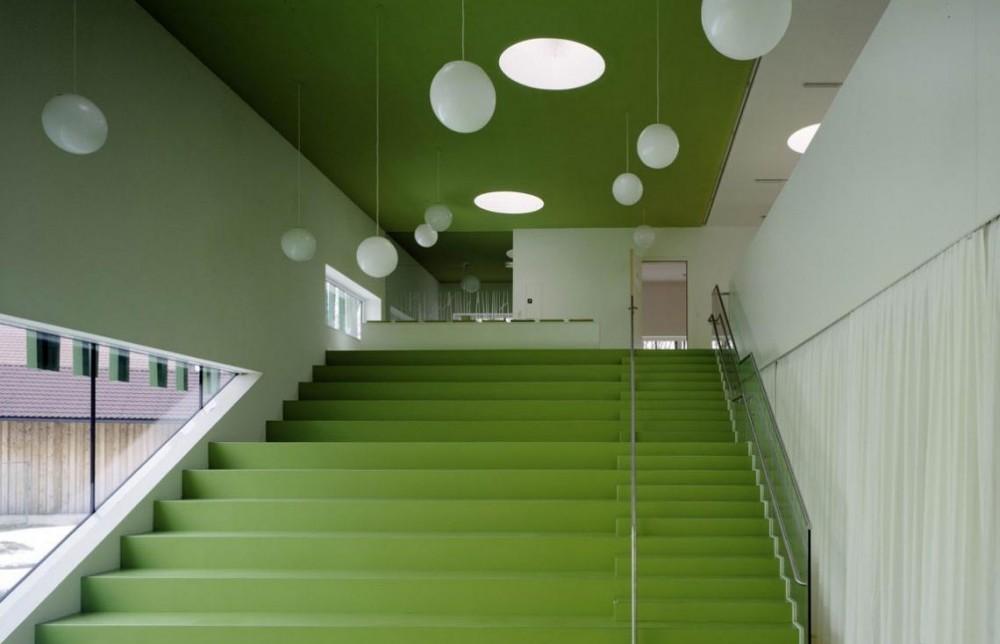 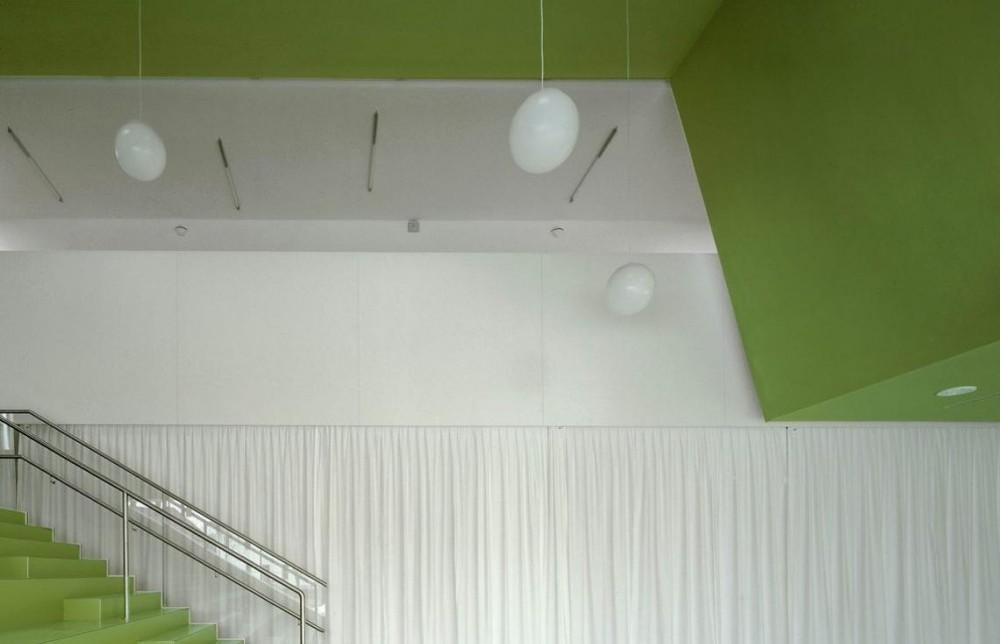 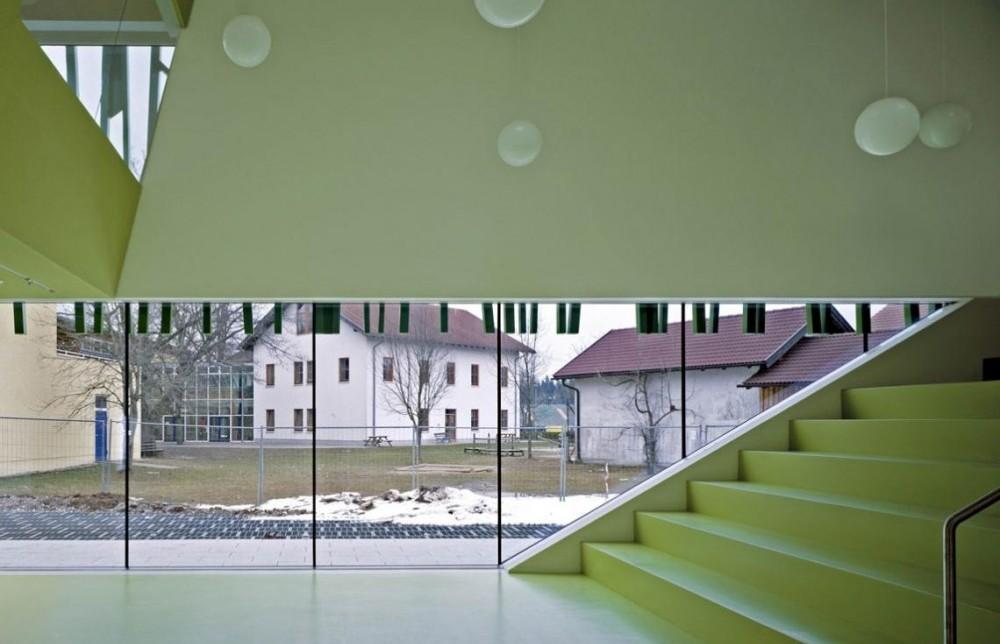 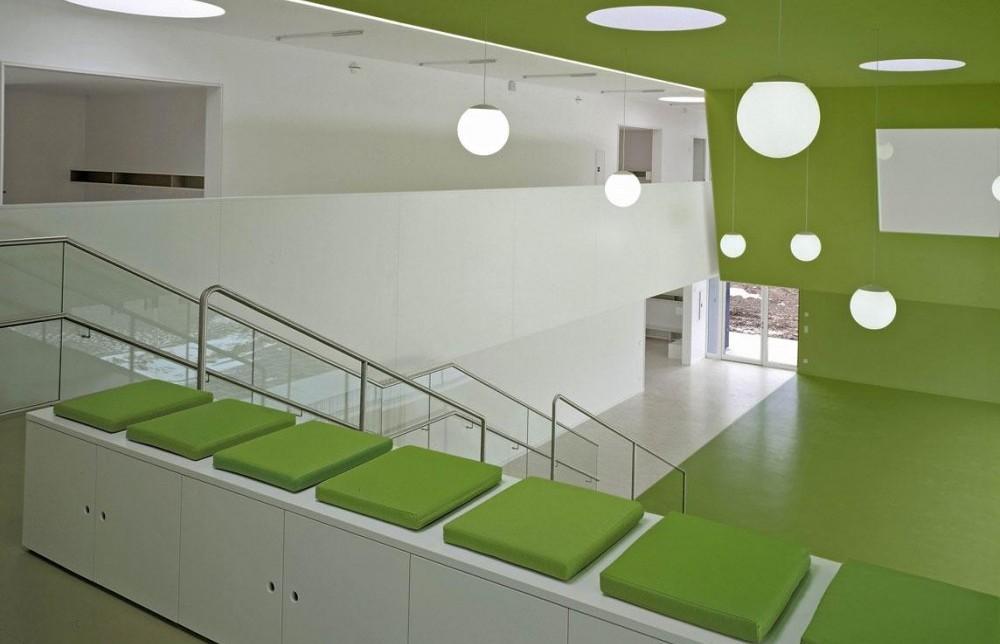 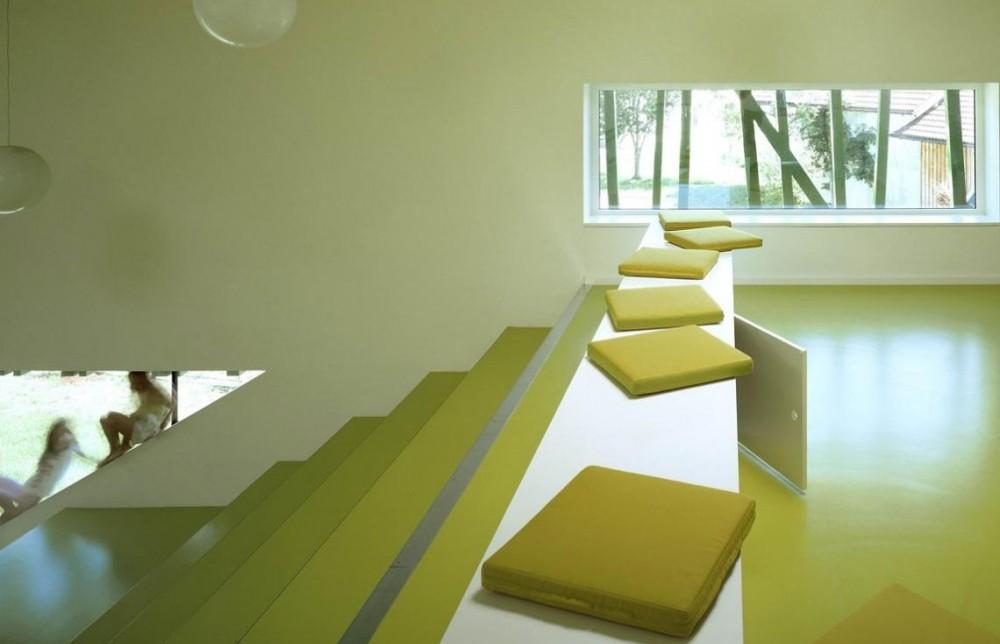 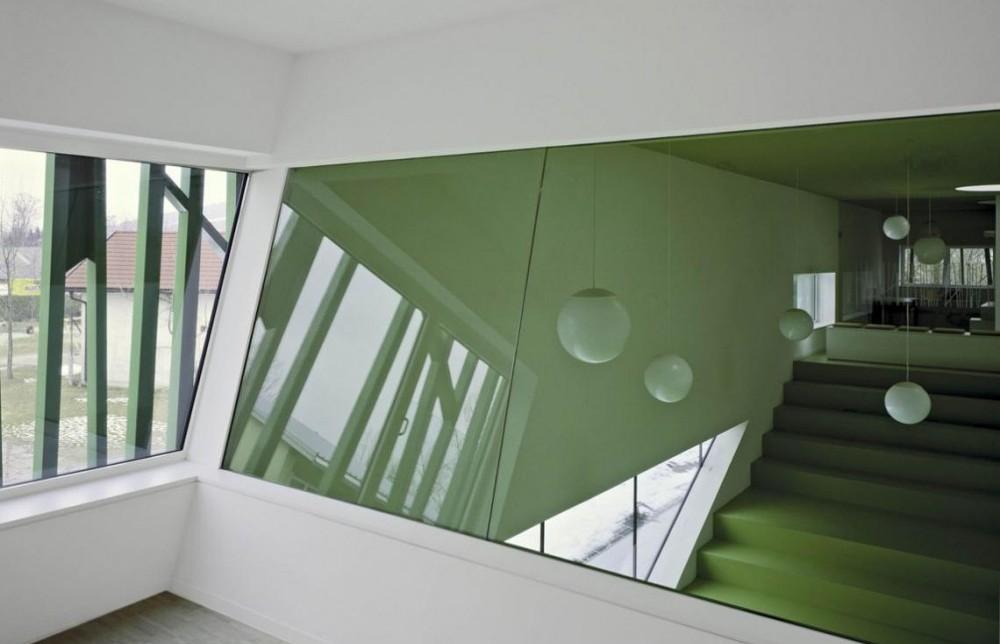 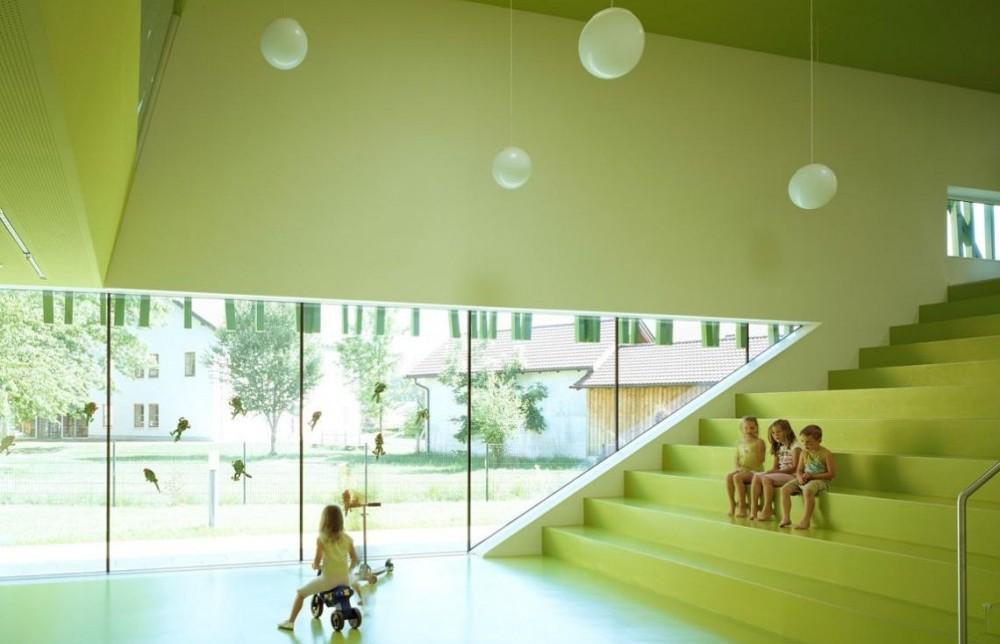 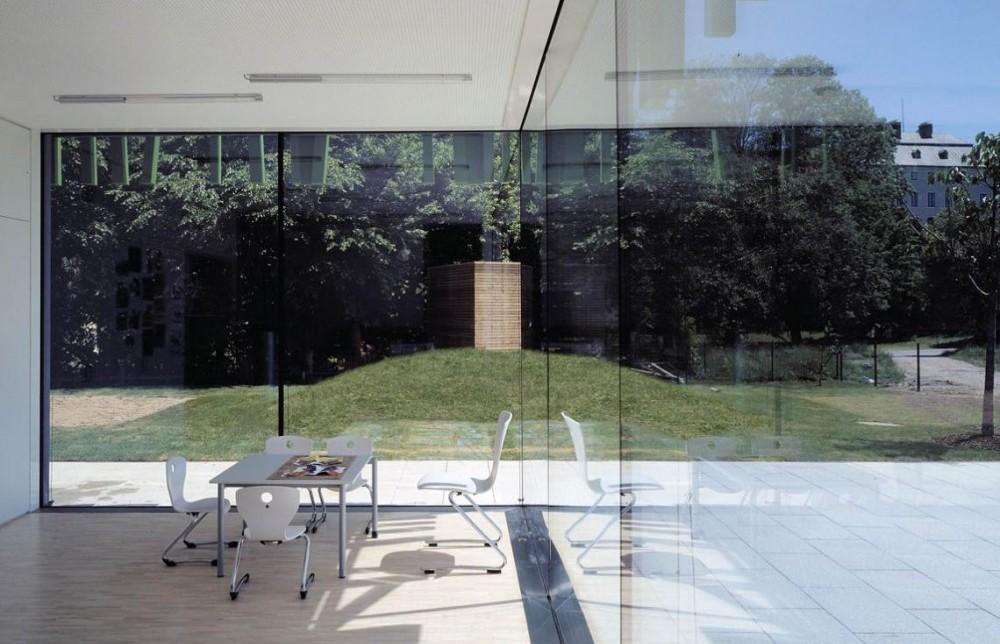 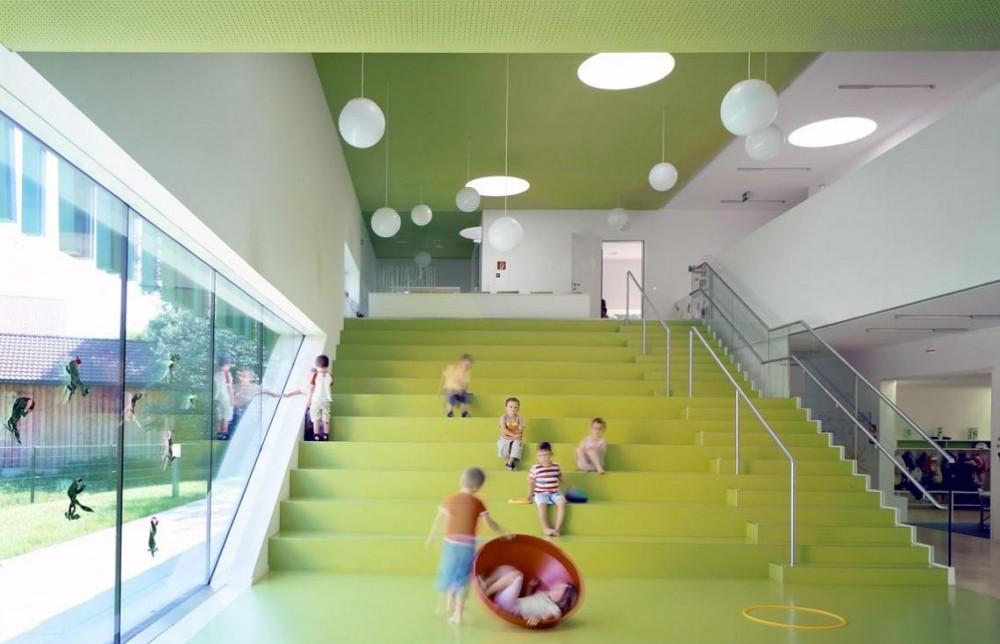 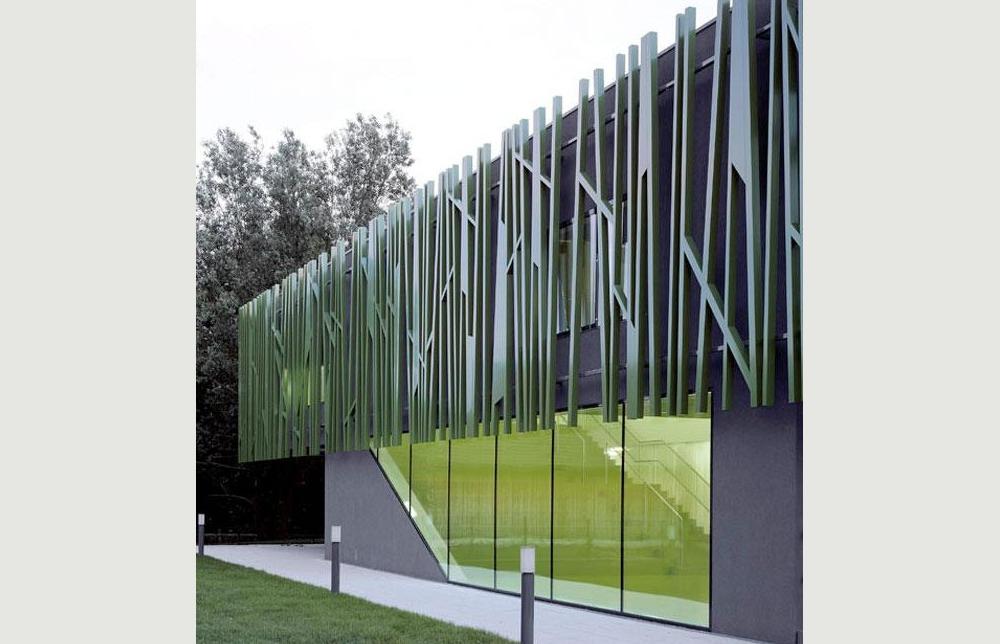 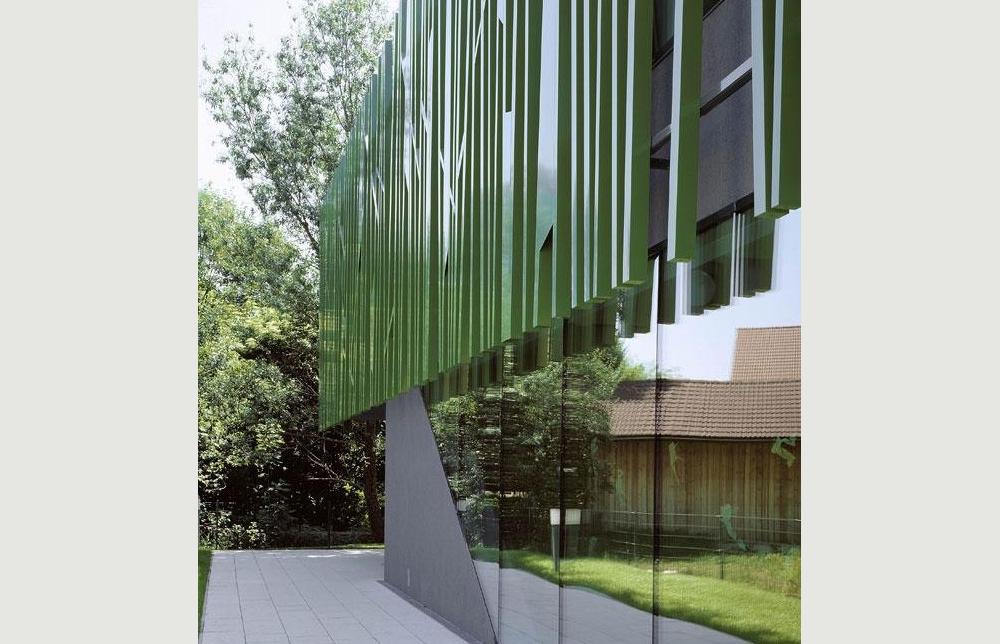 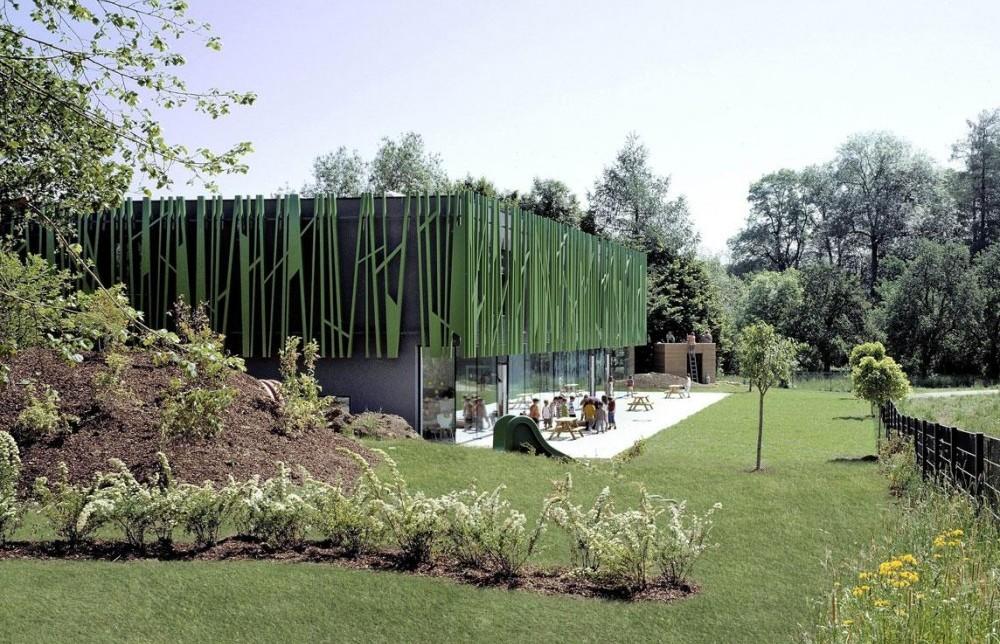 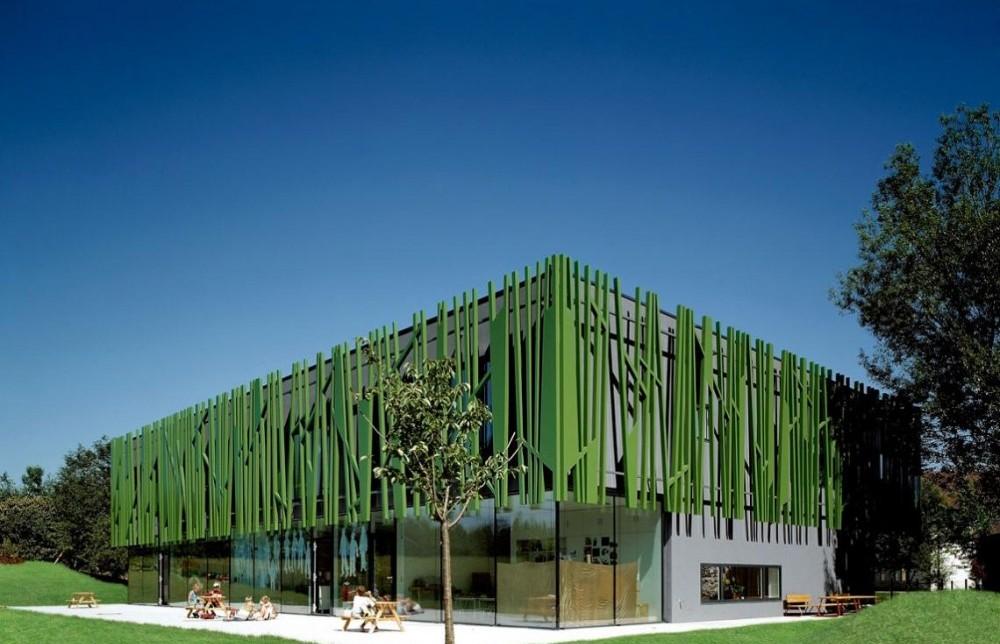 Kindergarten is the first stage of life where children should feel at home outside their own home. In contrast to earlier times, modern childhood is shaped by a fairly early schooling. The possibility of moving freely in publicly accessible spaces, streets, and private yards and exploring wild territories without danger is slowly disappearing. At the same time, confrontation with various influences from the media has increased. Thus, the freedom of movement has been restricted or missed out on altogether. A modern kindergarten tries to compensate these trends.

The innovation of the Kindergarten Sighartstein is therefore to meet spatial requirements by offering up multiple ”feel-good“ spaces: an ever-changing space continuum, inviting one to ”stray“ and move into them, providing both a retreat as well as a communications space. With the appropriation of these rooms, a certain empowerment takes place. In this context areas that are usually of solely functional use (such as circulation areas) become high quality useable spaces.

A kindergarten integrated into the landscape like a chameleon (including a crèche) for 4 groups.

Genius Loci— the first impression of this place in the midst of green meadows and fields leads to the concept of the built playground. The elevated and abstractly stylized ”grass“ facade of the cubic building brings a certain harmony to the volume as well as an identity and orientation for the kindergarten.

The flat roofed two-story cubic building optimally distributes the functions of a kindergarten. On the ground floor, one finds the space for the kindergarten groups— with direct access to the garden. The crche is accommodated in the protected upper story. In the crèche, an expandable third space has been made possible through a planned reallocation of the space. The core of the building is a multi-functional hall— a communicative center for children and caretakers, used as a junction for various functions: a space for shared activities and an alternative space for bad-weather activities. The building was conceived as an interactive kindergarten: following pedagogical concepts, a broad spectrum of varying room dimensions and situations were employed to stimulate, animate, to be used and played in.

How the work fits into the town planning

The kindergarten has a symbiotic relationship with the Alpine landscape and the surrounding buildings. The exterior rooms allocated to the kindergarten and the neighboring elementary school flow into one another (and into the building). Both facilities can be reached through a common access road. In order to react sustainably to the urban development of the small town, the central multi-functional hall can also used as a public event space, so that the building keeps up with the future development of the population, in any case.

Concerning the choice of materials we made a point of long-life cycle and good haptics. Natural materials as white-painted plaster and a friendly maple wood floor are applied in the main rooms, the natural rubber floor of the hall builds a perfect playground. All materials are common in the context and were produced in Austria and constructed/ build by local companies.

The space of the kindergarten, over the course of time, will be filled with colorful children’s things, furnishings, materials and first works. Thus, we consciously reduced the color spectrum to the single tone variation of ‘green grass.’ The psychological workings of the color green— as the ’color of life, youth, and spring.—‘ play an important role: Green is a color that calms and harmonizes. It enhances qualities such as helpfulness, endurance, tolerance, and contentedness. ››› Green as the stage of childish curiosity: CAN YOU HEAR THE GRASS GROW?! Children learn by playing— and when they can do this in a relaxed atmosphere, quiet and fully concentrated, we lay the foundation for every form of learning later in life, for the concentration that is so essential.

The building combines two forms of use in one building and, with its two-story organization, creates a very compact building shell. The construction form and building shell rely upon tried and true systems which provide enduring maintenance-free functions.