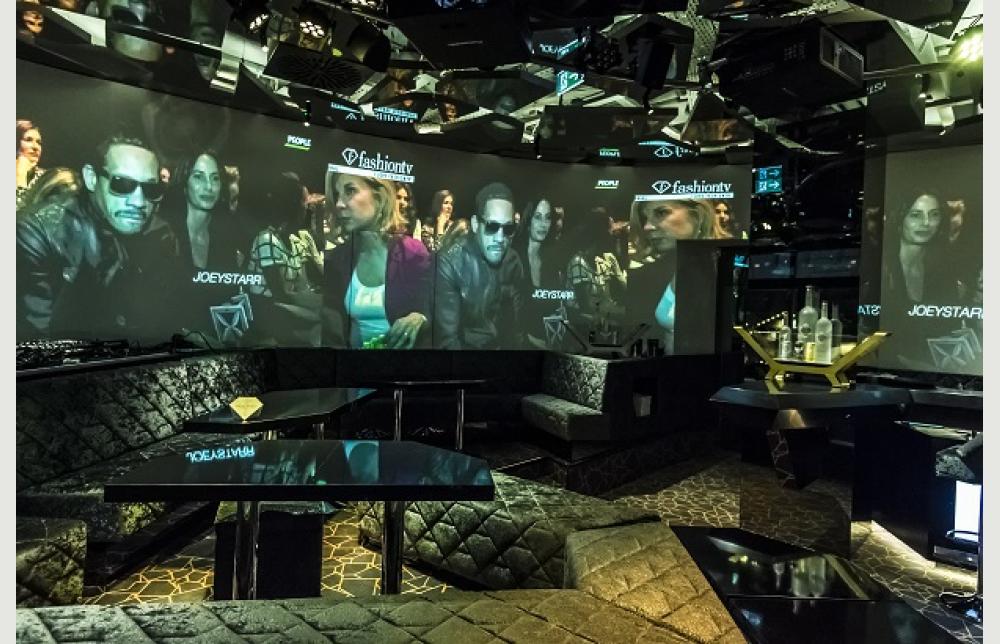 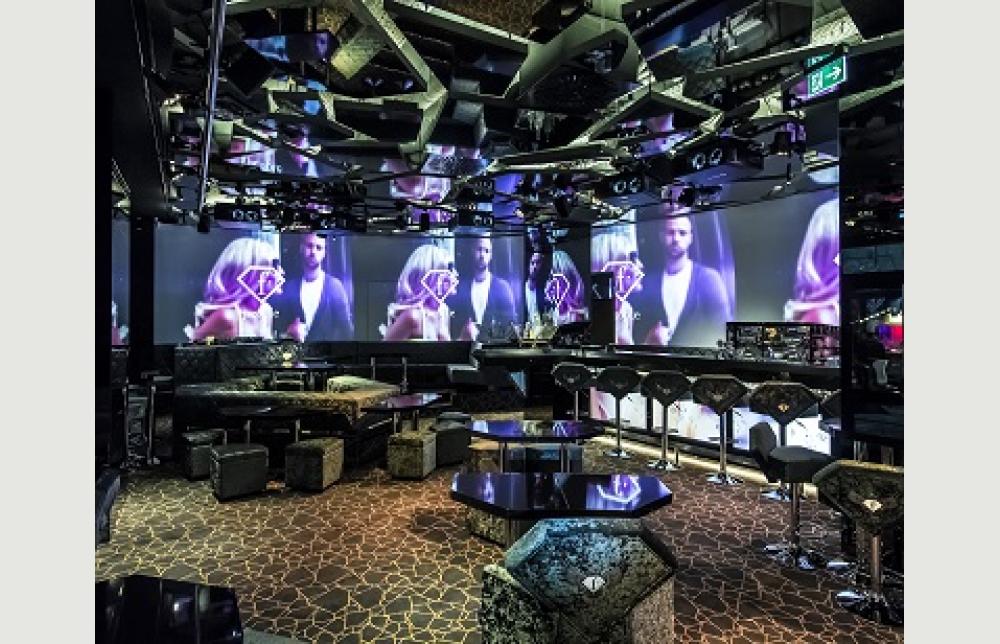 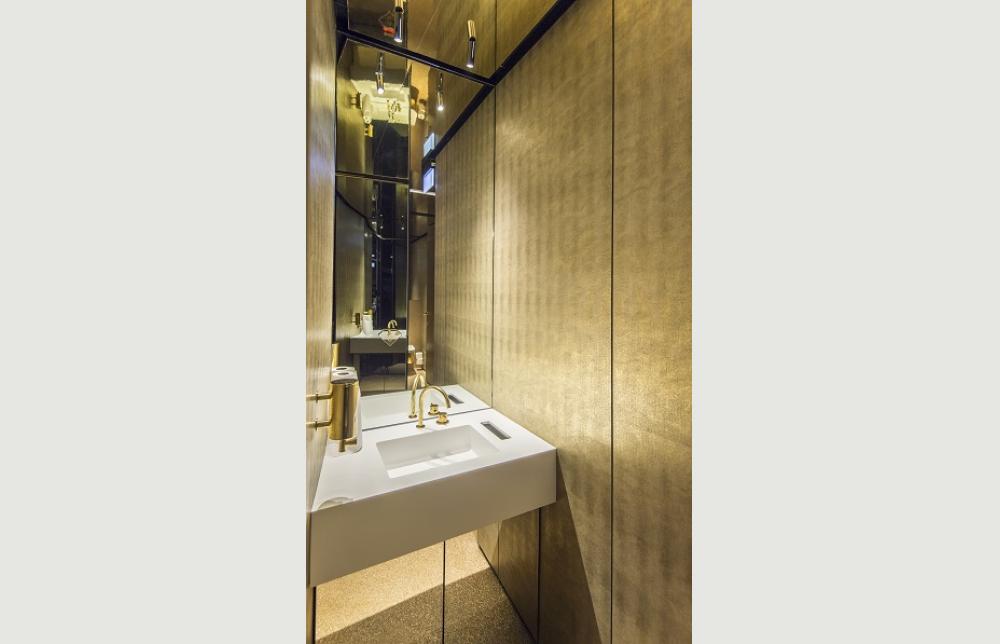 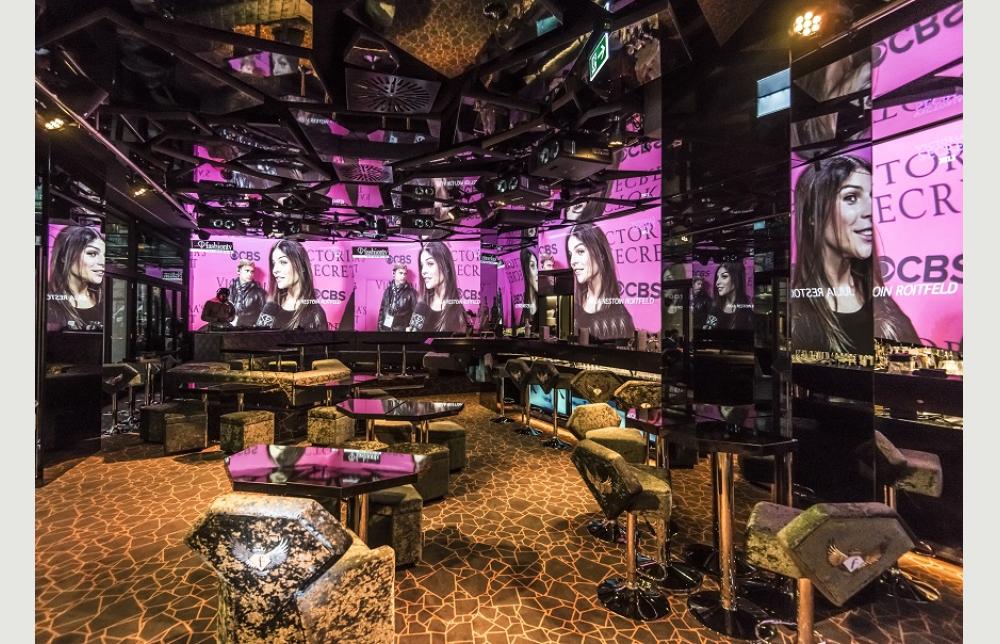 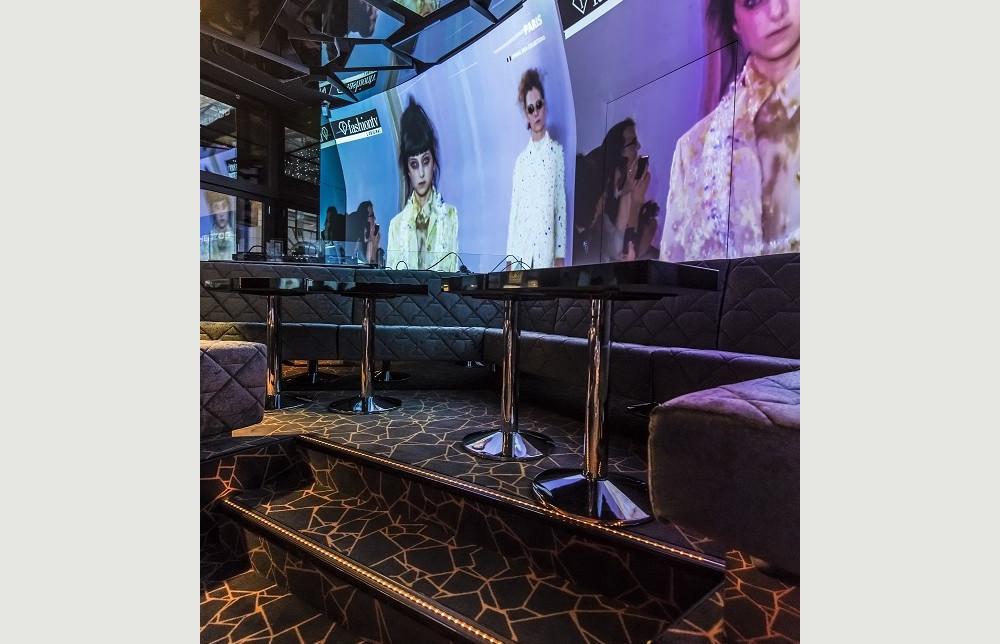 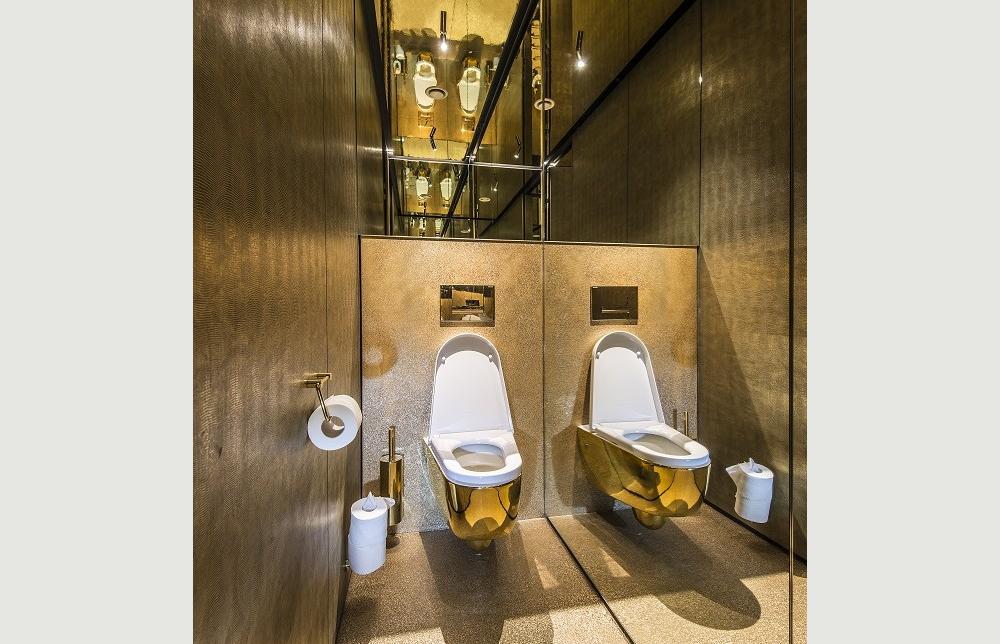 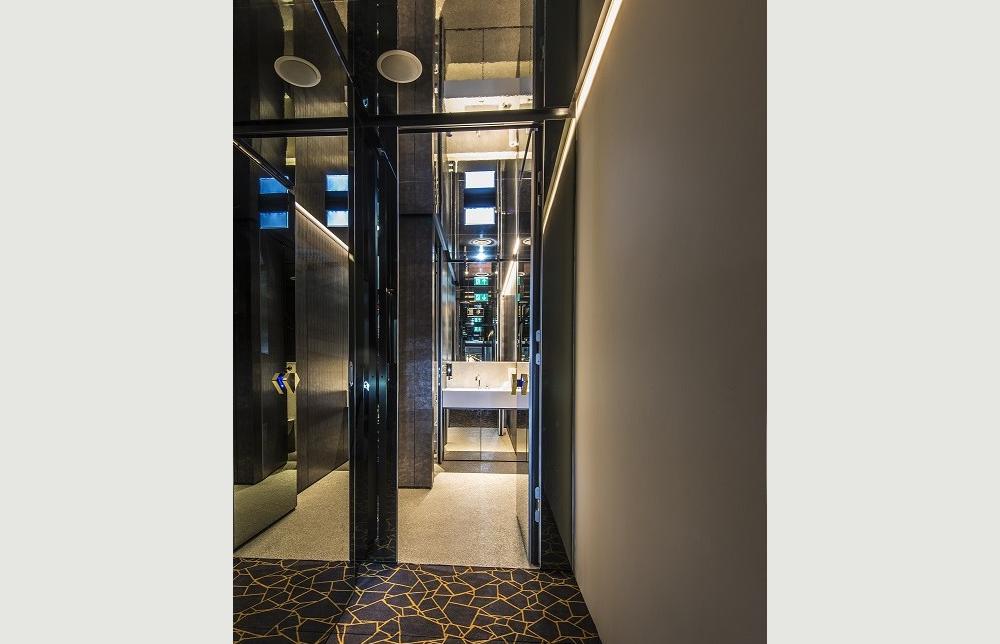 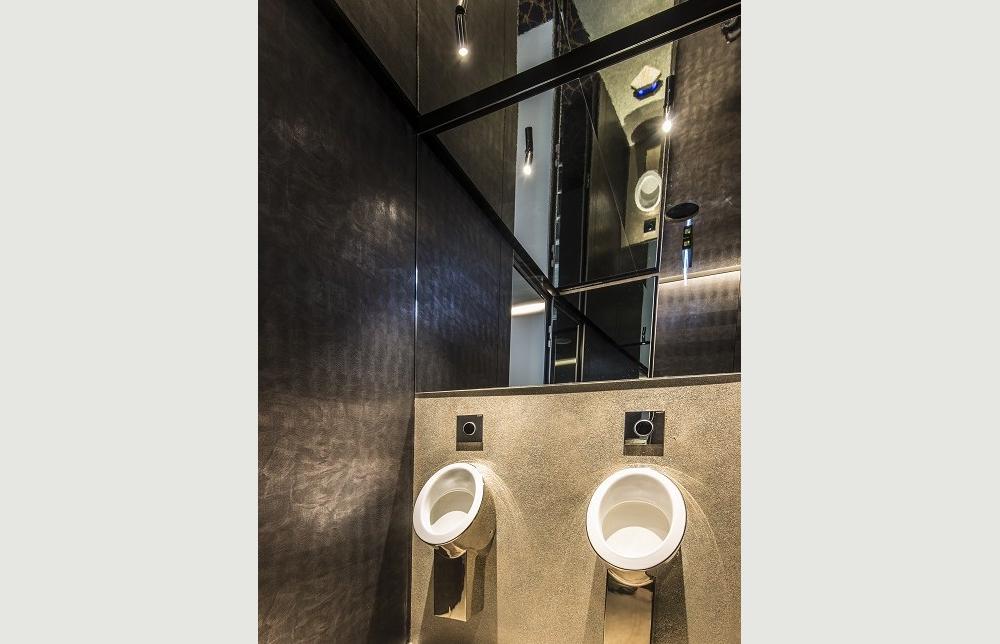 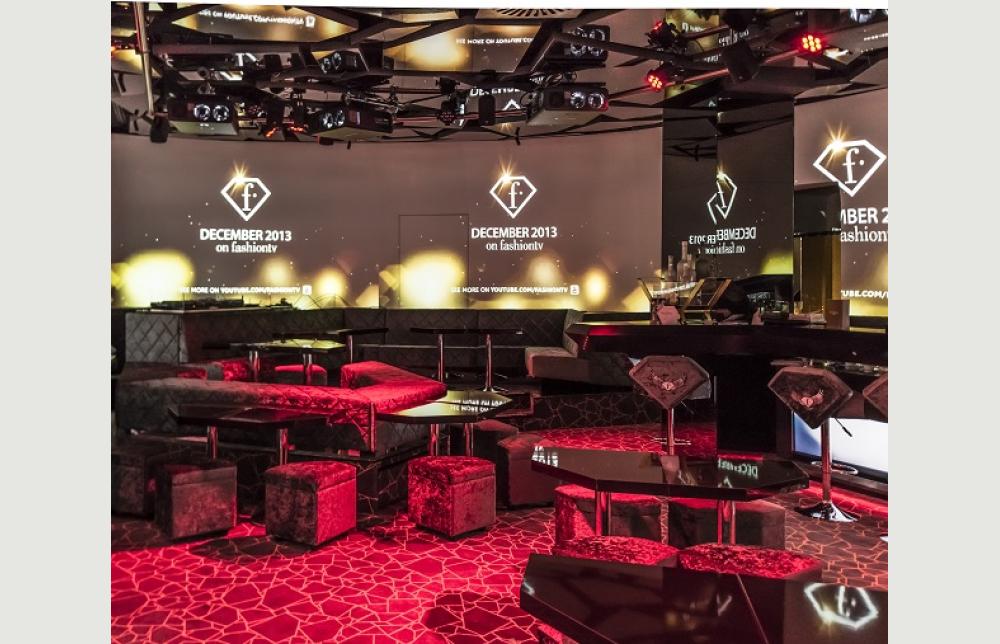 The first LOVE F CAFÉ is placed at the formerly most exclusive and prominent corner in Vienna – the “SIRK-corner”. The Café, owned by TV cannel Fashion-TV, is set in the middle of the broad entry into the traditional Viennese city center, succeeding in striking a bridge between modernity and tradition.

The idea of a corner entrance, inspired by a typical corner shop, was taken over and pursued. Does it seem more adapted and “Viennese” on the outside it becomes clear at entering the Café that it is not a typical local coffee house. The development of the room is done diagonally, which means that the major axis is located vis-à-vis to the corner entrance.
A large, elliptical arranged screening wall summarizes the space and separates the guestroom from the operation premises. By its extraordinary shape the wall provides an international flair, reminiscent of Piccadilly Circus in London, and suggests that this is not a normal coffee shop but the embodiment of a television channel. It is a tribute to Fashion-TV, which is although internationally regarded as trendsetter, less well known as an Austrian company.

In response to the large screen the entire ventilation systems and wiring are placed in an open ceiling system. The ceiling itself is dominated by Fashion-TV logos that work in different sizes and function as dark mirrored ceiling panels. To guarantee constant access to technology, every single ceiling element is to be taken down individually.

The panels reflect the images of the huge screening wall. The different arrangements and sizes of the panels rip the image of the projection in different sized frames, the logos simulate driving ice floe on the ceiling. It is this interesting effect of the broken reflection which predetermines the atmosphere in the room significantly.

The diamond logo of the TV channel is not only a key element in the ceiling design; it is also the determining pattern of the carpet. The subtle reminder of Fashion-TV is incorporated in the design of the Café as often as possible.

Based on the idea of a flagship store, all the furniture – designed by Fashion-TV – is for sale and therefore interchangeable. The place functions as a beautiful setting for the café which is also a showroom. Keeping this in mind, a worldwide expansion of LOVE F CAFÉ is made possible.

In addition to the huge screening wall there are four more flatscreens located in the café as well as various USB ports on the bar and the seating. By providing wireless internet the café transforms into a universal media space in which boundaries between interpersonal communications and via television, internet and telephone disappear. LOVE F CAFÉ is not only a coffee shop, it is also a place of bundled media presence and the extravagant embodiment of Fashion TV.