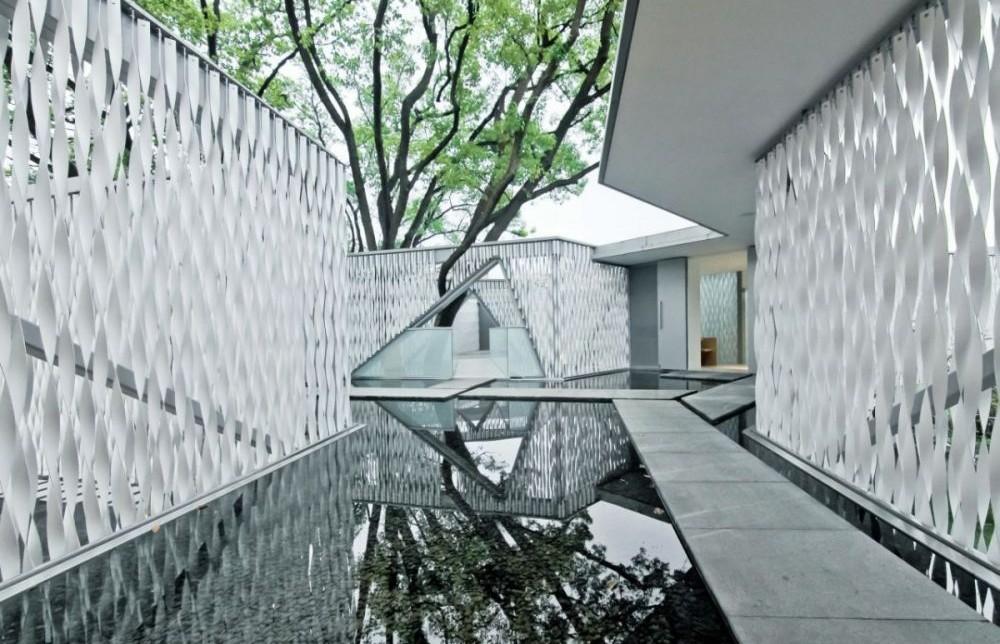 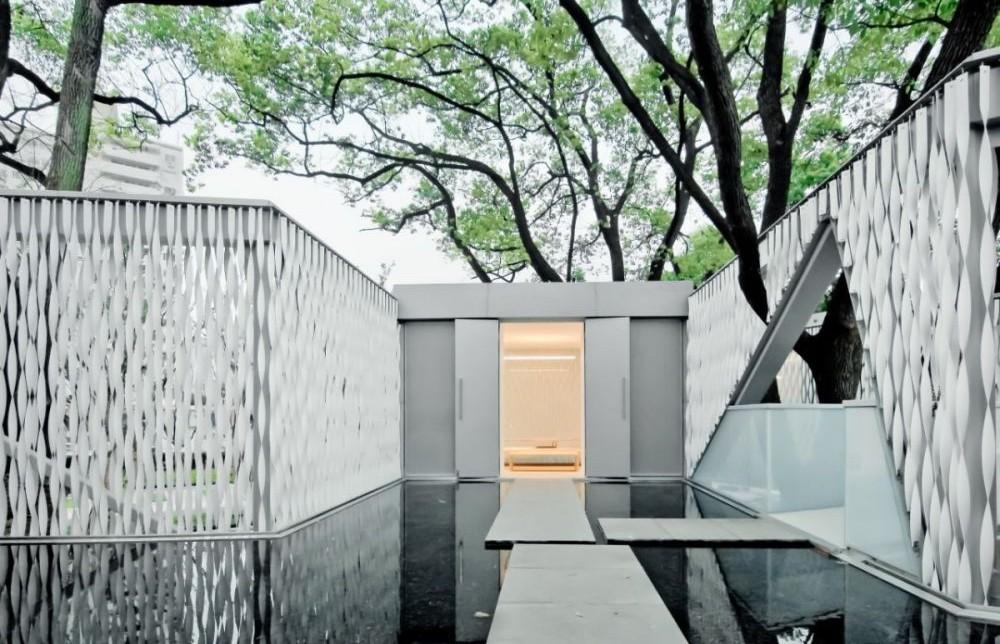 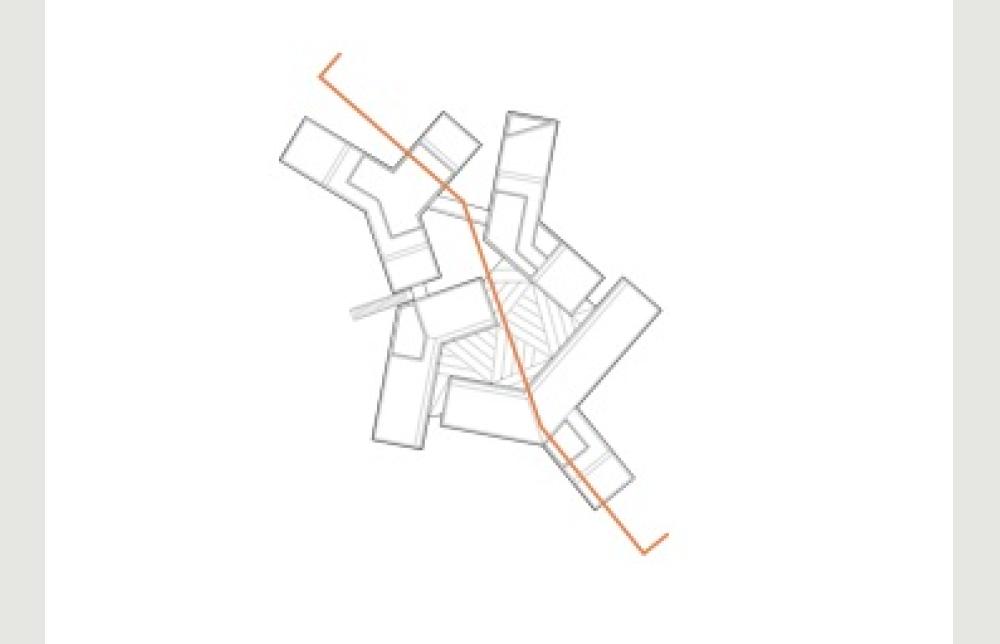 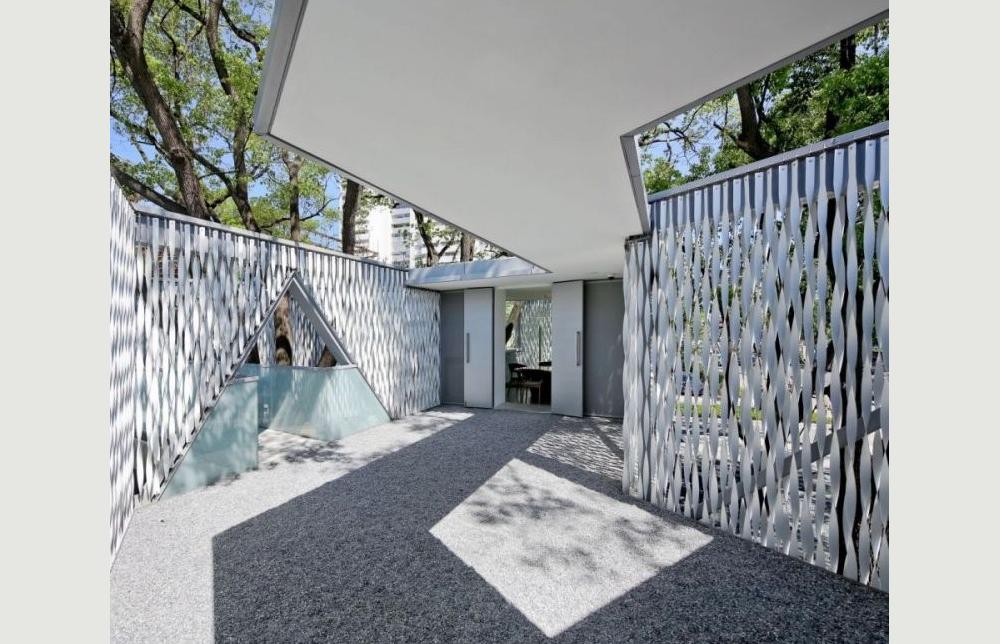 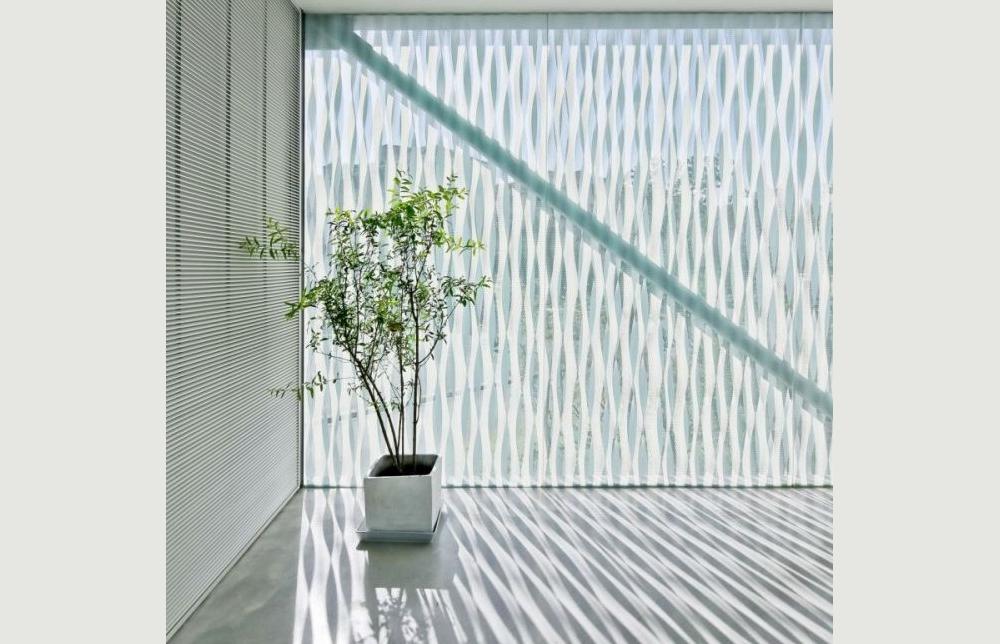 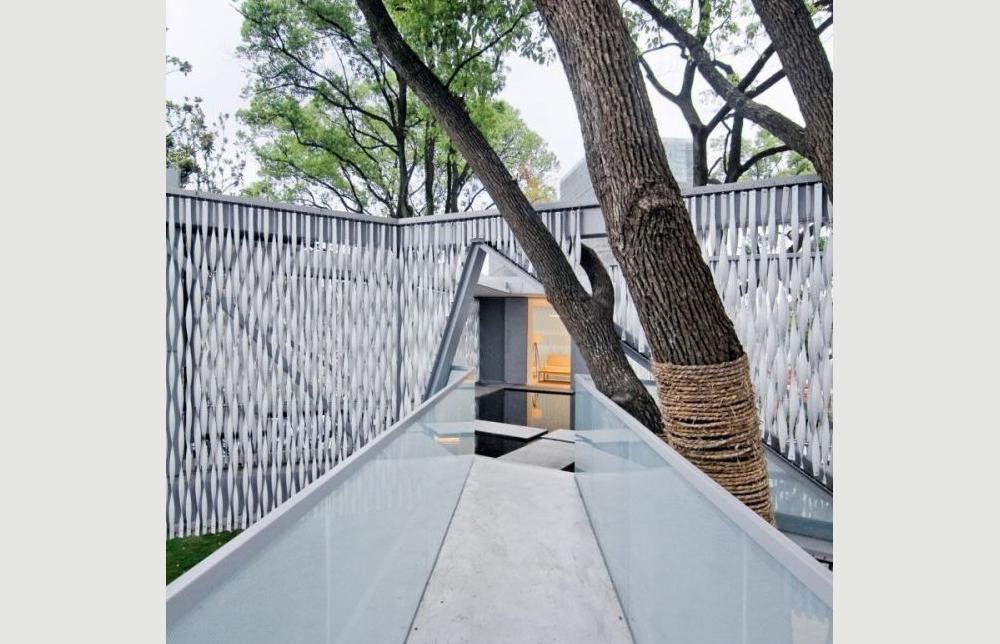 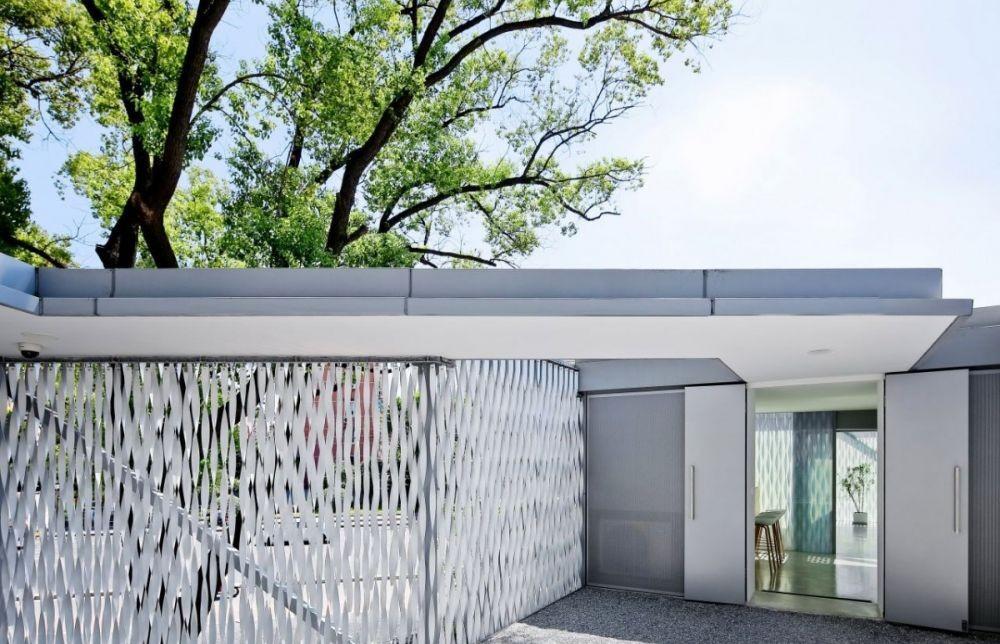 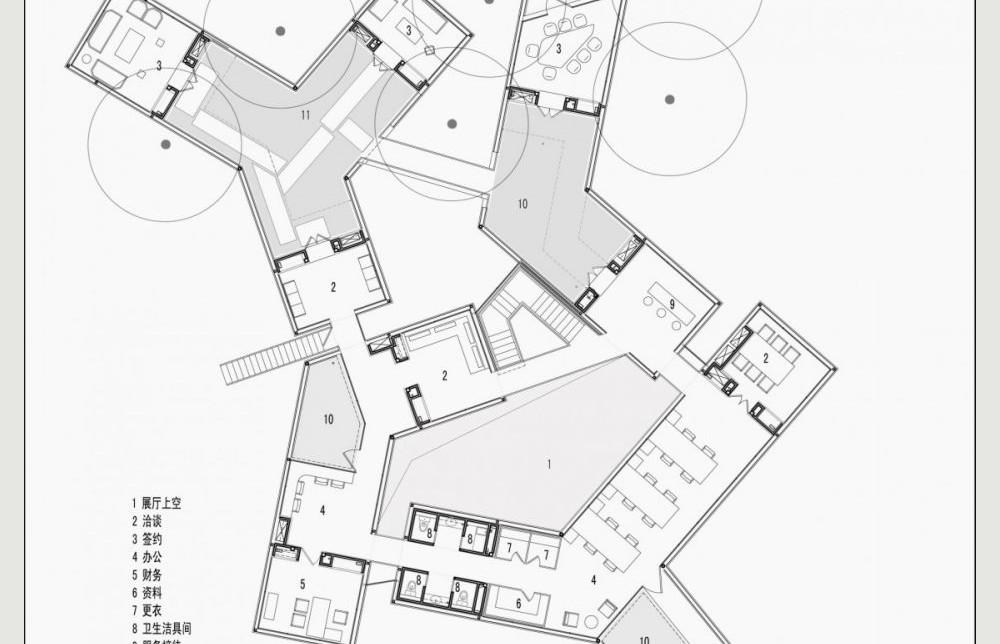 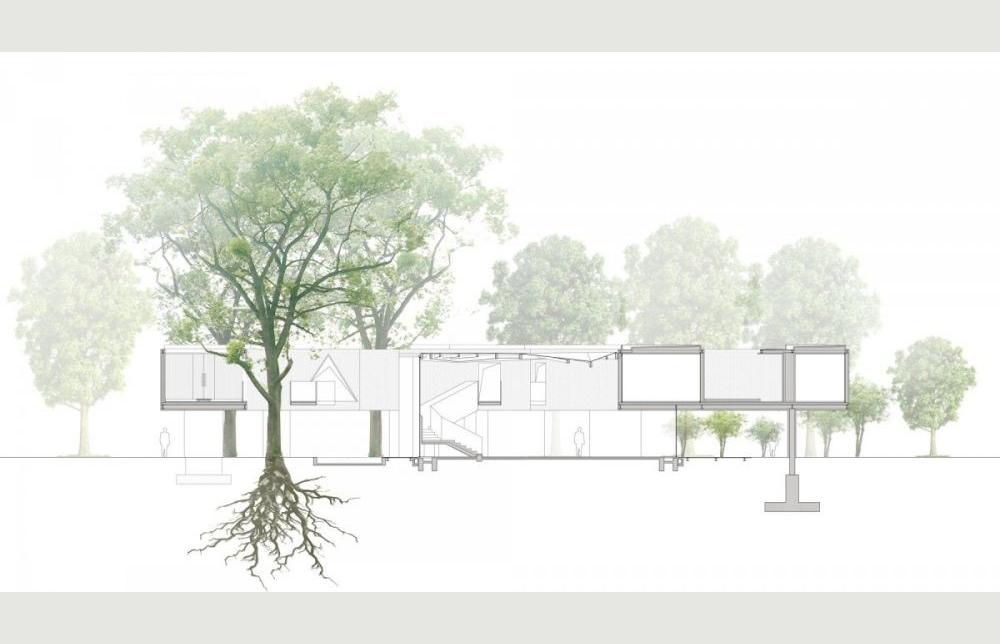 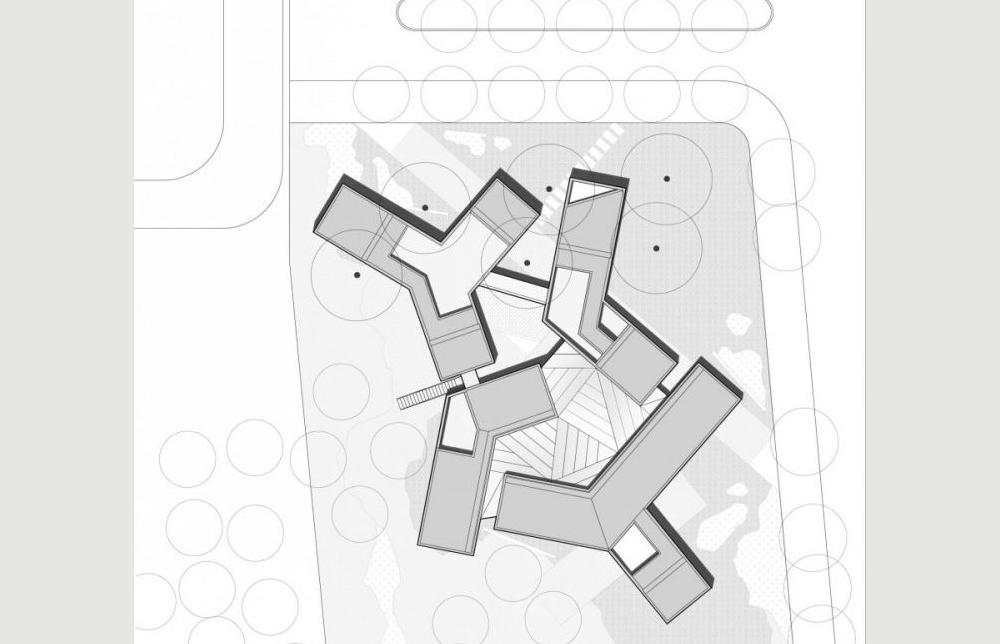 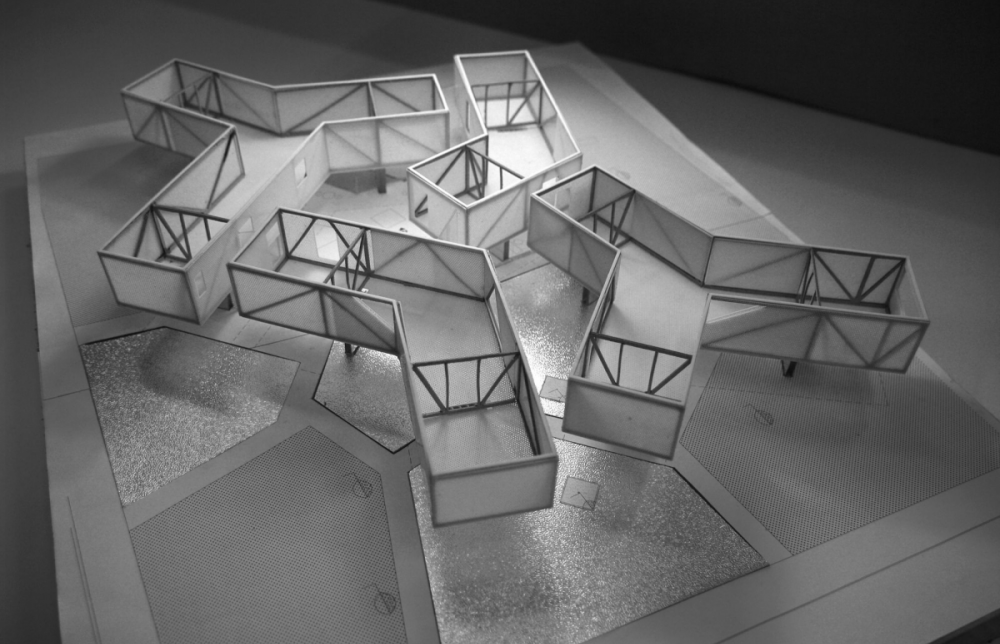 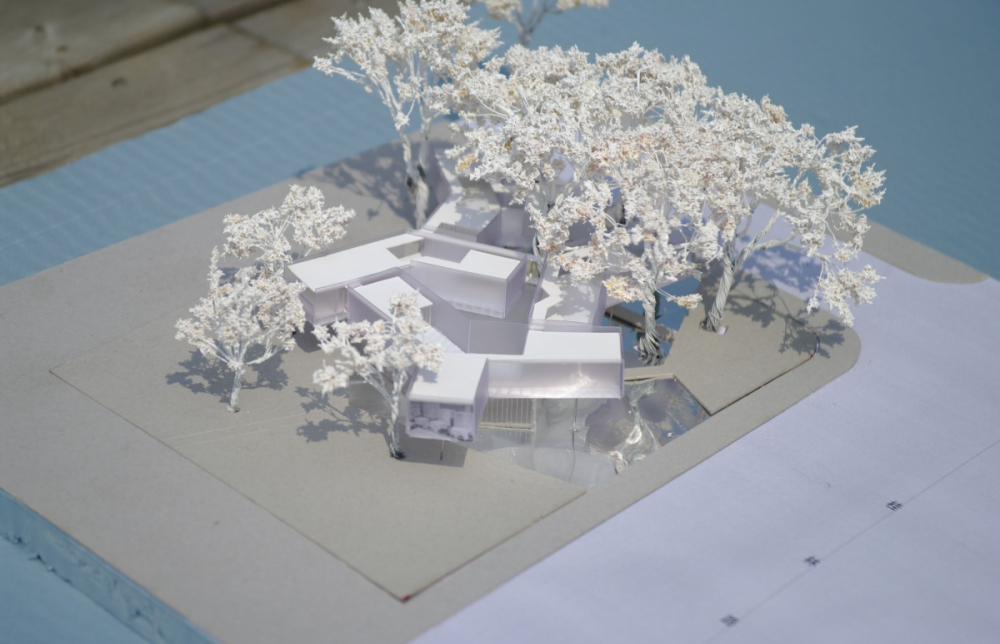 I expect that this building could enlighten us to think the relevance among human, nature and society. Huaxin office complex locates to the west of Guilin road, with a green land at the south of its entry. This green land owns 6 old camphor trees and opens to the urban main road — these two facts become the starting point of the design, and hence to lead to two basic strategies of the business center: One is to elevate the main body of building up to second floor in order to maximize the open green space on the ground; Second is to establish an intimate and interactive relationship with 6 trees while protecting them in the site.

The completed building is composed by four independently suspended structures that are linked by bridges. 10 pieces of combined steel and concrete walls support the upper structures, they are all covered by reflective stainless steel panels, which contain all the vertical ducts and reflect the surrounding green environment. These walls are thus cleared up and help the suspension effect of the upper volumes. A ground floor atrium is enclosed by transparent glasses in-between three structures. It introduces sceneries and natural light by all-around transparency and skylight, and makes the spatial interaction between inside and outside.

Approaching second floor through the stair in the atrium, a new spatial order will be unfolded along the path. Four suspended volumes that were realized by steel trusses stretch themselves horizontally with “Y” or “L” shapes among the old trees. The twisted and tensioned aluminum strips assembled the translucent walls of these volumes, which present the truss structure in an indistinct way and become containers and boundaries of a series of interior and exterior spaces. When wandering across these translucent walls, the visitor will alternatively encounter rooms, courtyards, bridges and different sceneries guided by them. The branches and leafs of the trees traverse the building freely and become touchable friends.

Here the structure, its adherent material, and the branches and leafs of trees interweave together to present atmosphere of each space. It is under the organization of time(or path) that these spaces(room and courtyard) realize an environmental experience where time and space interact. It is a work collaborated by both architecture and nature.

We might never expect kind feedbacks from nature unless we treat nature in a kind and positive way. The architecture of 21st century shall not only respond to human’s needs, but also act as a positive media between human and environment. The essential goal of future architecture is to establish balanced and dynamic relevance among human, nature and society.