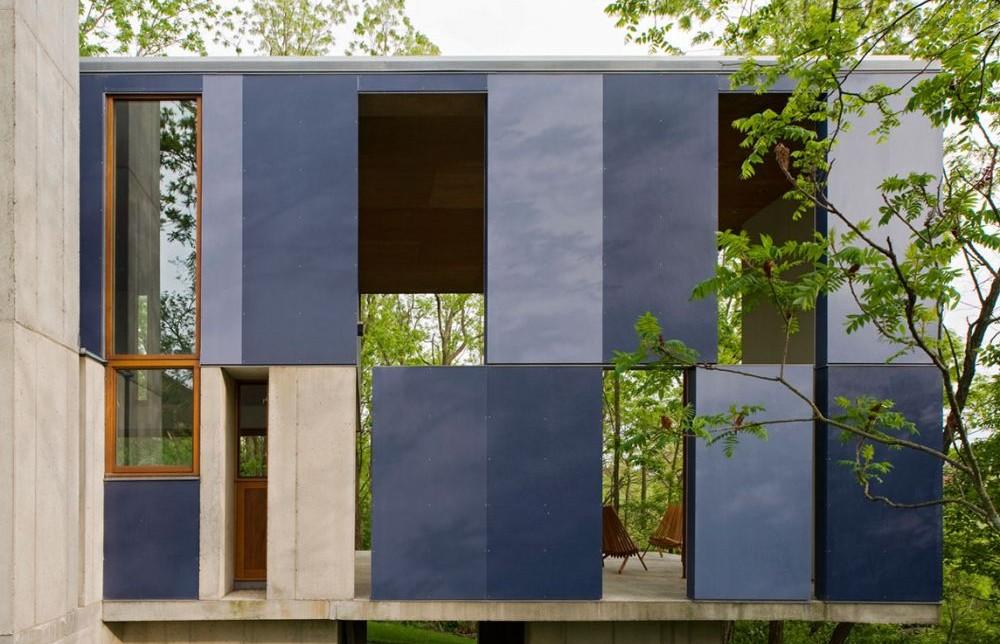 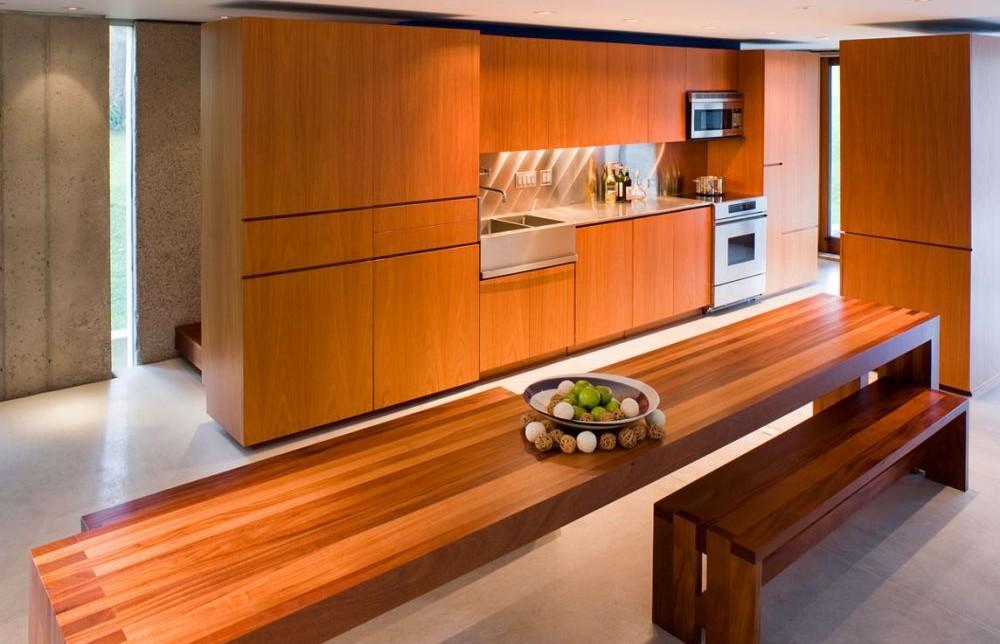 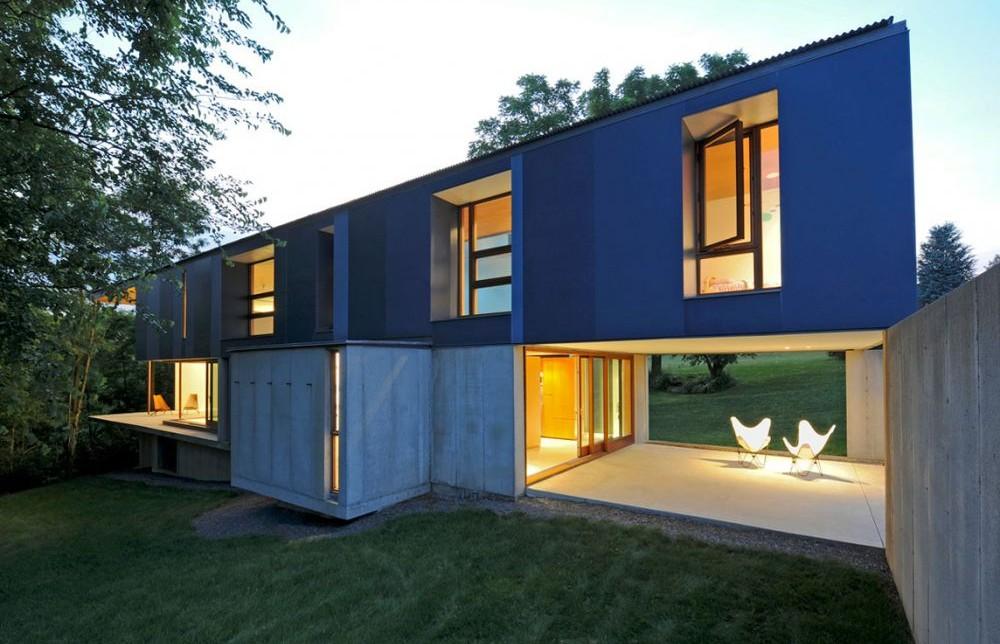 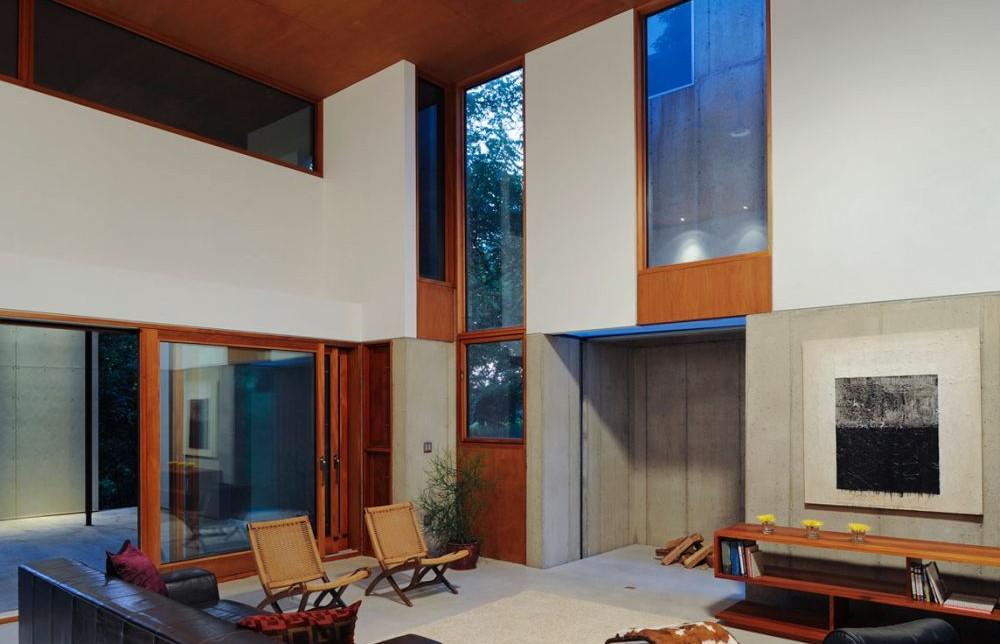 Situated in a typical nondescript subdivision of Eastern Pennsylvania, this home is surrounded by other single-family houses of all shapes and sizes, redolent with clichs and conventions which can be just as easily elsewhere as here. For that reason it is the surrounding landscape and history of the region that largely determines the design. The primary building materials, site poured concrete and various concrete products, pay respect to the history of Northampton the birthplace of American Portland Cement.

Permanently embedded into the landscape of Northampton and now standing proudly in ruin, are the industrial artifacts which record the history of cement making. Kilns which were used to melt the rock quarried here, developed over time. The initial Dome kilns were inefficient and gave way to the Schoefer kilns which could operate continuously. Within a decade, the Schoefer kilns were replaced with rotary kilns whose technology remains in existence. Todays modern cement plant stands as a strong form consisting of
framed boxes perched atop a series of concrete monoliths which loom in the partially monotonous and chaotic surroundings that are suburbia. These industrial machines, along with the material they produce, greatly influence the design of this home.

The house is not a solitary cube that might have been sited anywhere, but one which penetrates into the landscape and becomes one with it. This single-family, three bedroom home deviates in scale and appearance from the neighboring houses. In fact it seems closer in spirit to the forest and topography it nestles within. The main living area, whose face is half buried into the landscape, offers no views to the east except that of its walled courtyard. It is to be a peaceful place, a kind of oasis sheltered from sound and views of the subdivision thus creating an outdoor room that opens to the sky. The interior space is open, intimate, and neutral with domestic objects articulated as furnishings placed within. Hues of blue skin echo the mottled limestone quarried here.

The base of the home is constructed of concrete. This seemingly unnatural mixture of fluid stone and steel reinforcement is quite sufficiently different from historical materials. However, it is a material that offers the rough, tactile charm that often emanate from the irregularities of mature buildings. Deliberately crude in its execution, the concrete monolith is treated as an existing condition, or ruin, whose subsequent wood-framed, cementitious clad boxes are carefully inserted. The ruins powerful presence is derived from its material qualities and from the way it is linked to the ground. It penetrates into the earth and engages a platform which becomes clearly defined as the topography falls away.

The planted concrete ruin looks as though it is going to be in the location it has found for itself for a long time. Unlike its surrounding production housing counterparts, it is not even thinking of moving away from the place it occupies and defines by its very existence. The concrete is allowed to age, become rough and perhaps slowly erode. The intangible dimension of time could then be recorded by the traces left on the walls. Eventually, gravel will be exposed and particles of dirt, algae, and moss will take hold. This home is an architecture that involves all the senses. The surfaces and details demand to be felt. The spaces and special sequences require to be grasped by the senses that apprehend gravity, driving forces, and temperature. Details involving human contact such as entrance areas, steps, handles and hand rails are treated with particular care. The restricted tolerances of construction elegantly contrasts with the random nature of the organic while the massing, textures, and unevenness of weathering surfaces transmit similar sensations to the landscape.