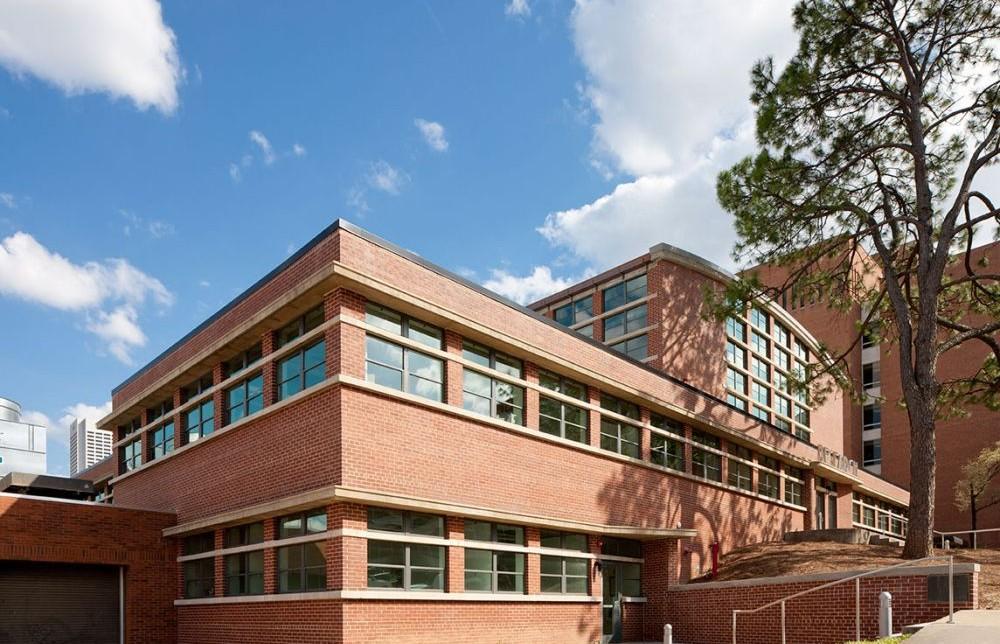 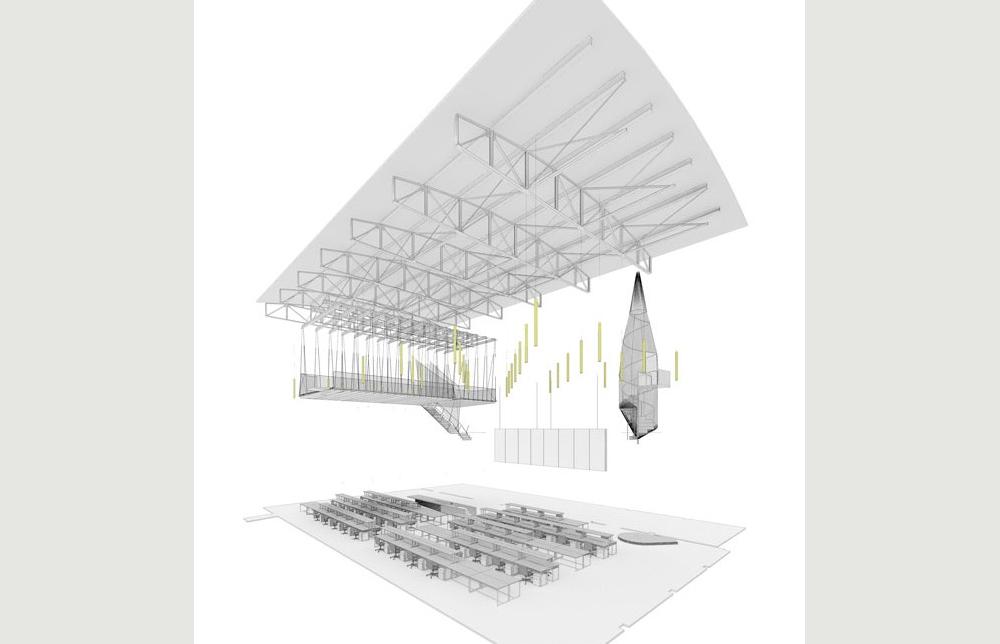 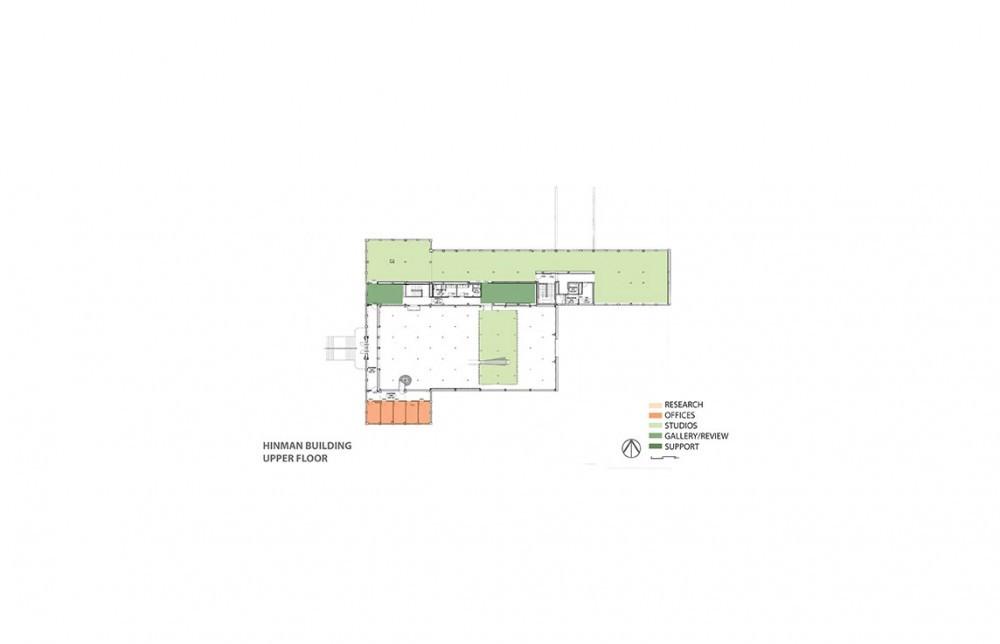 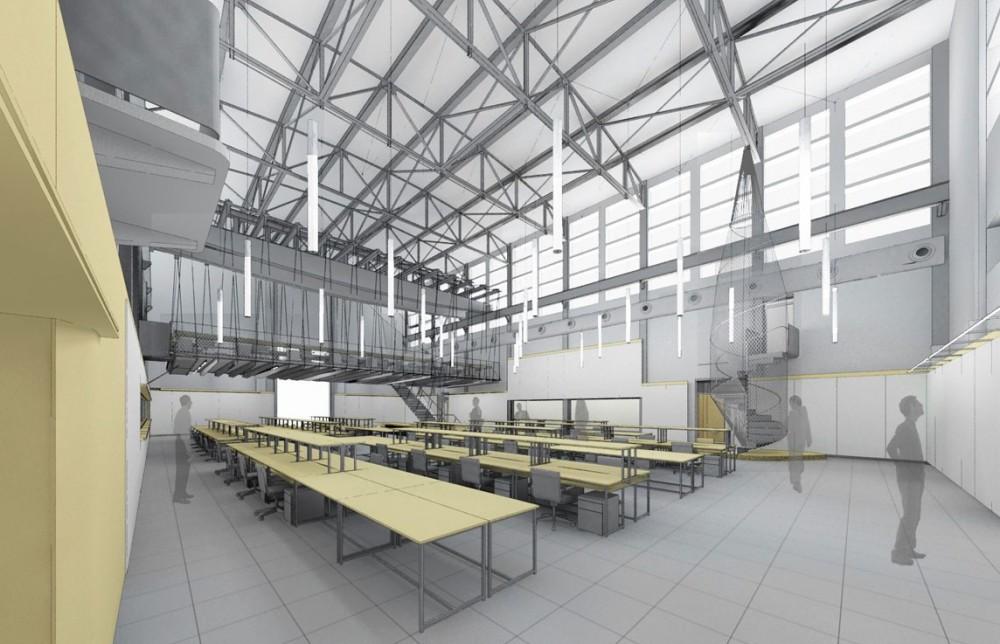 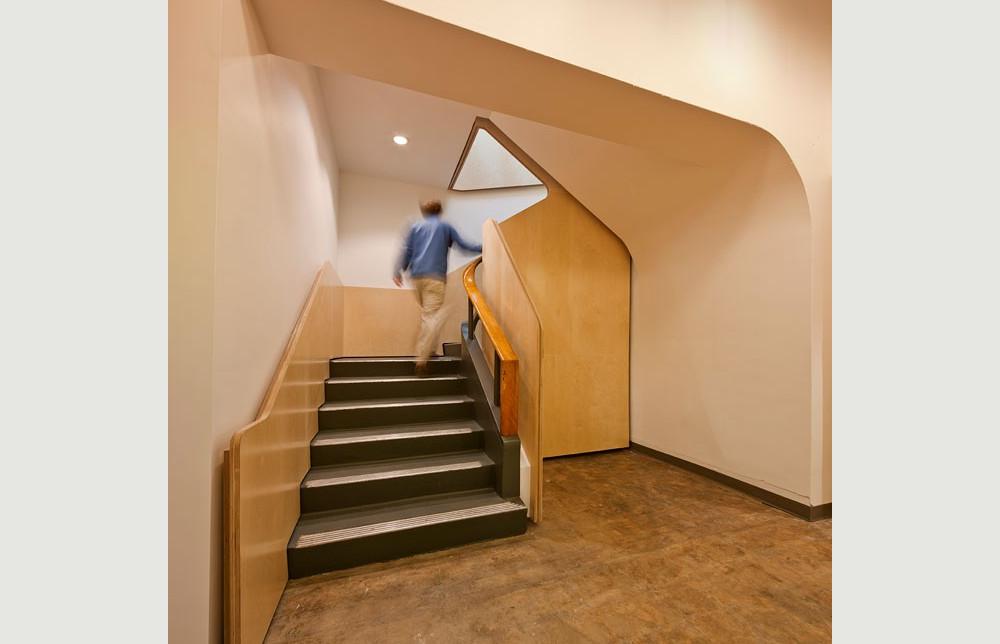 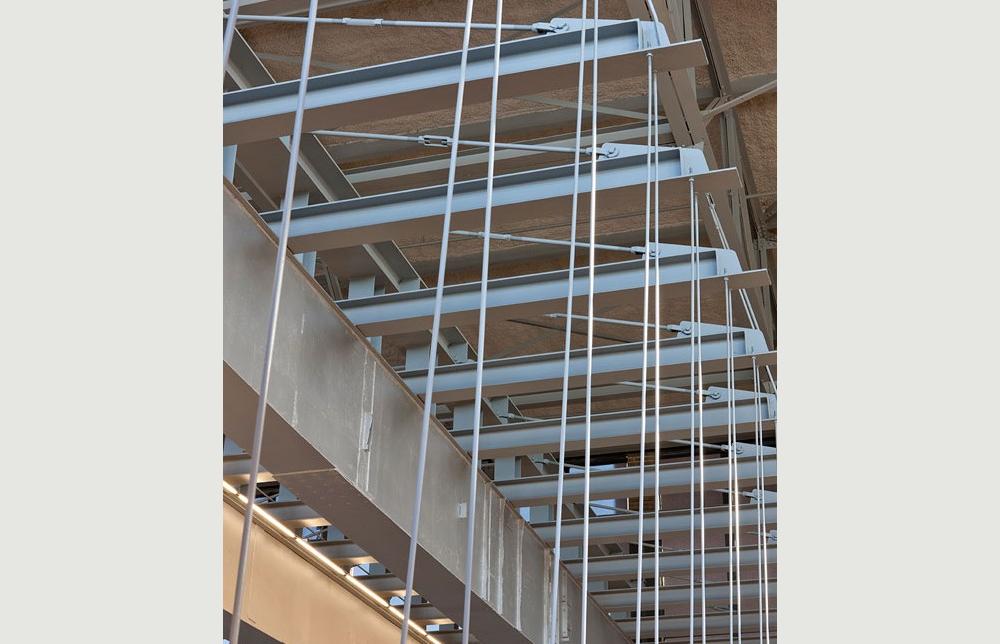 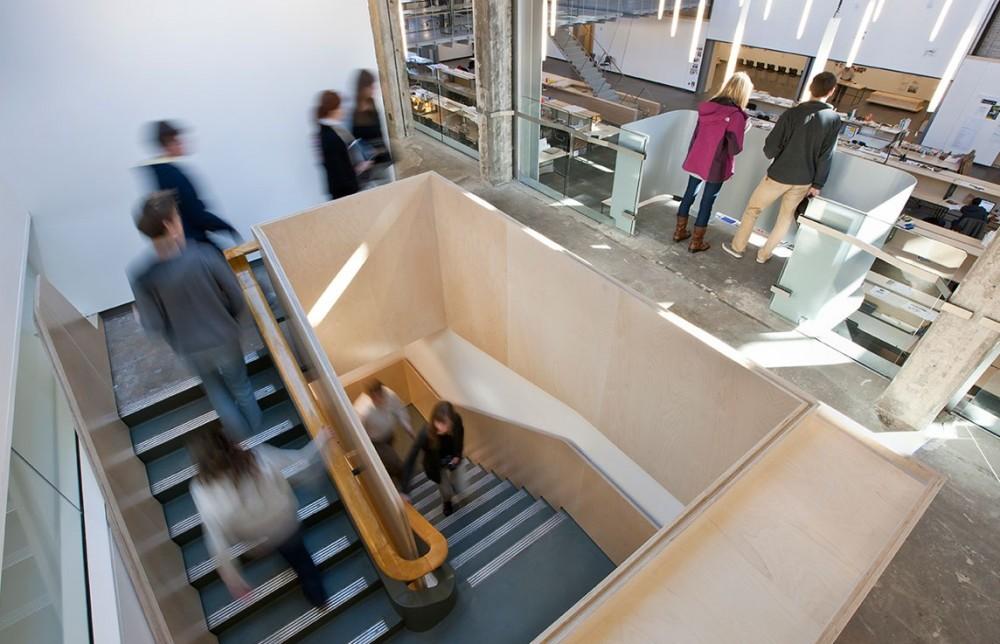 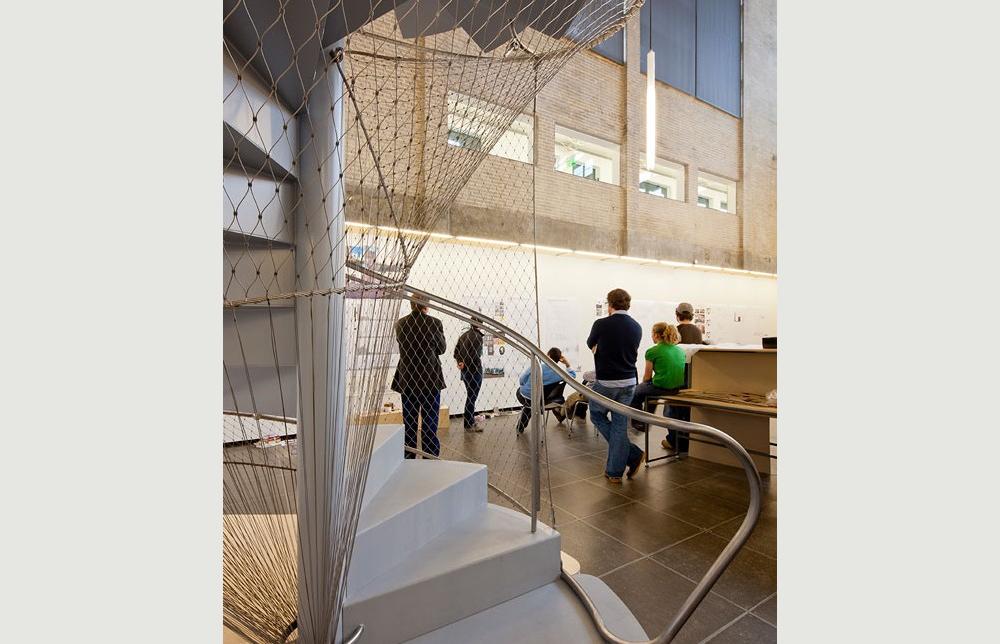 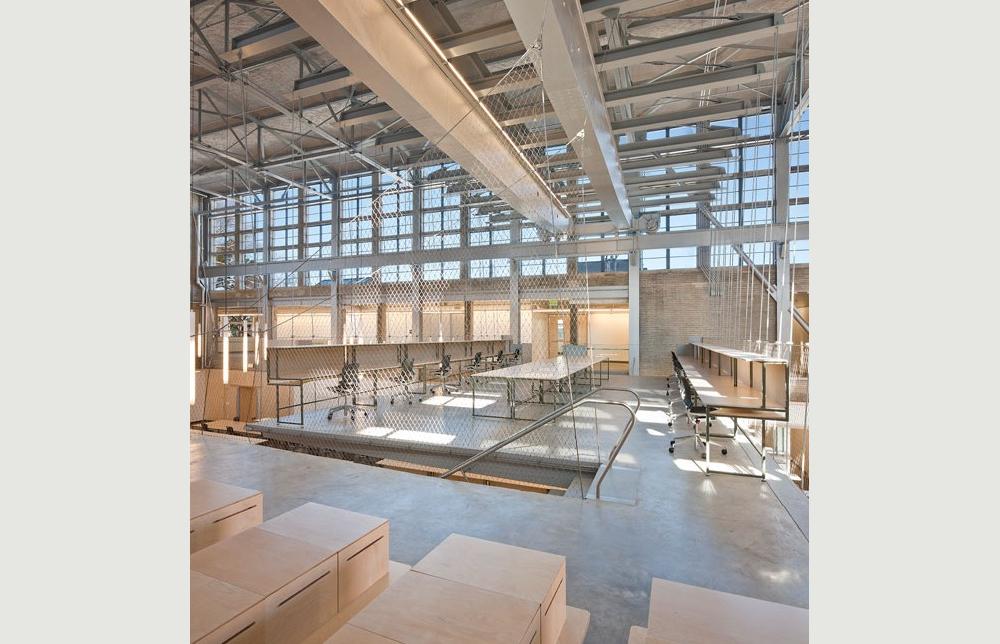 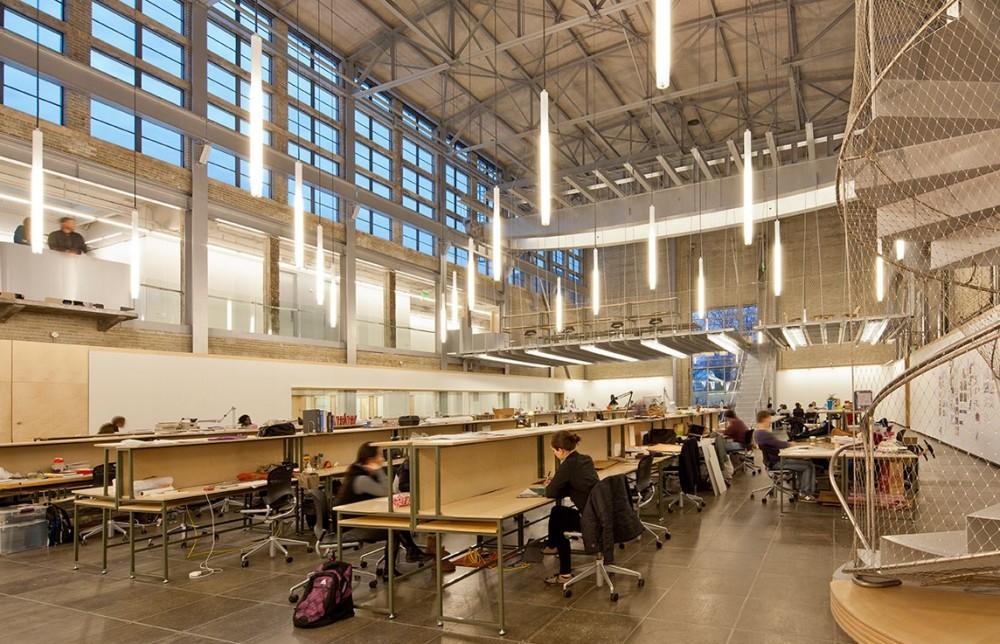 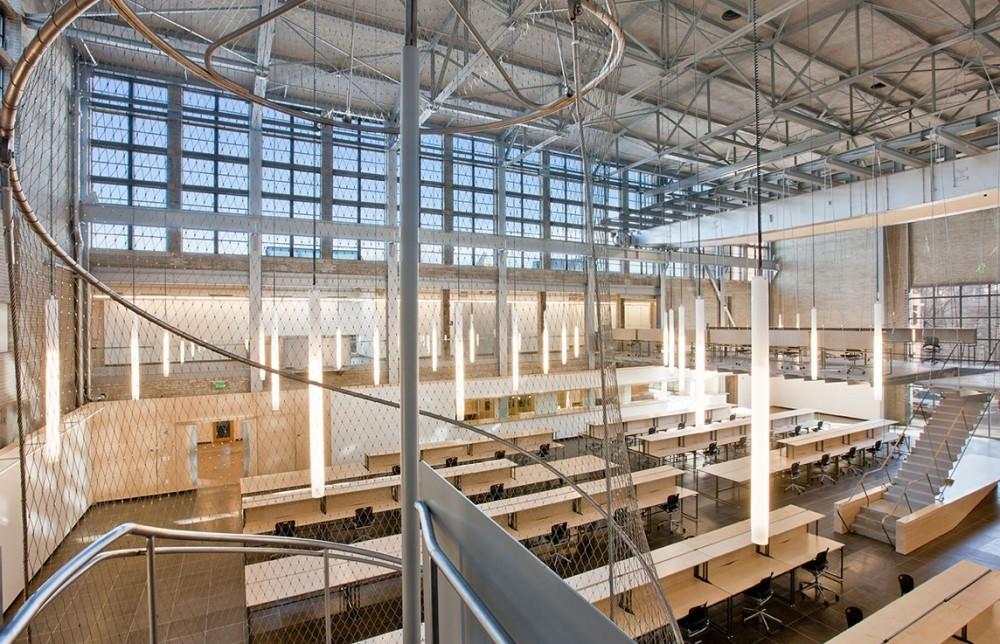 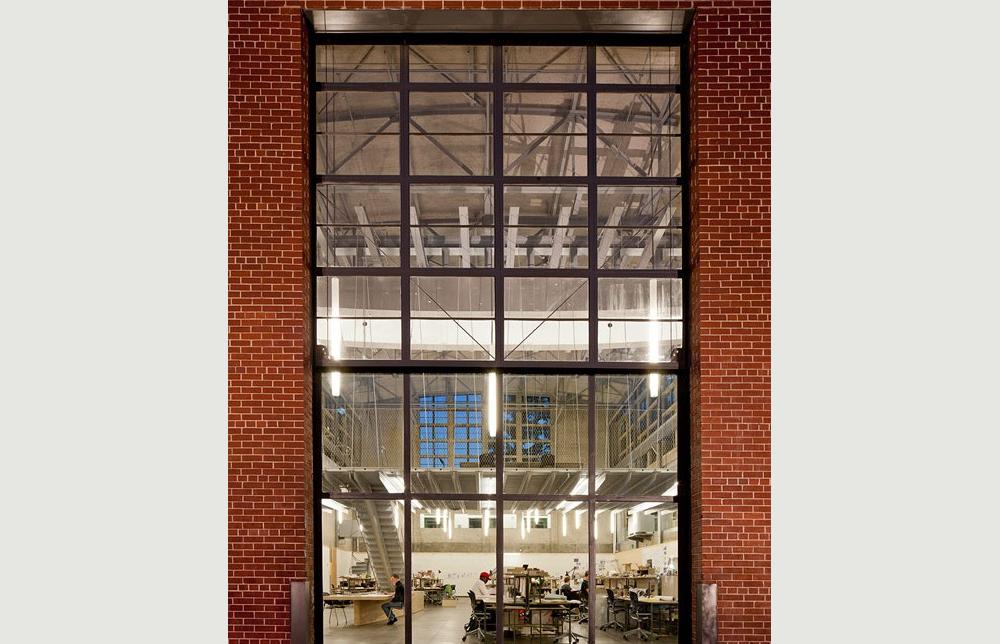 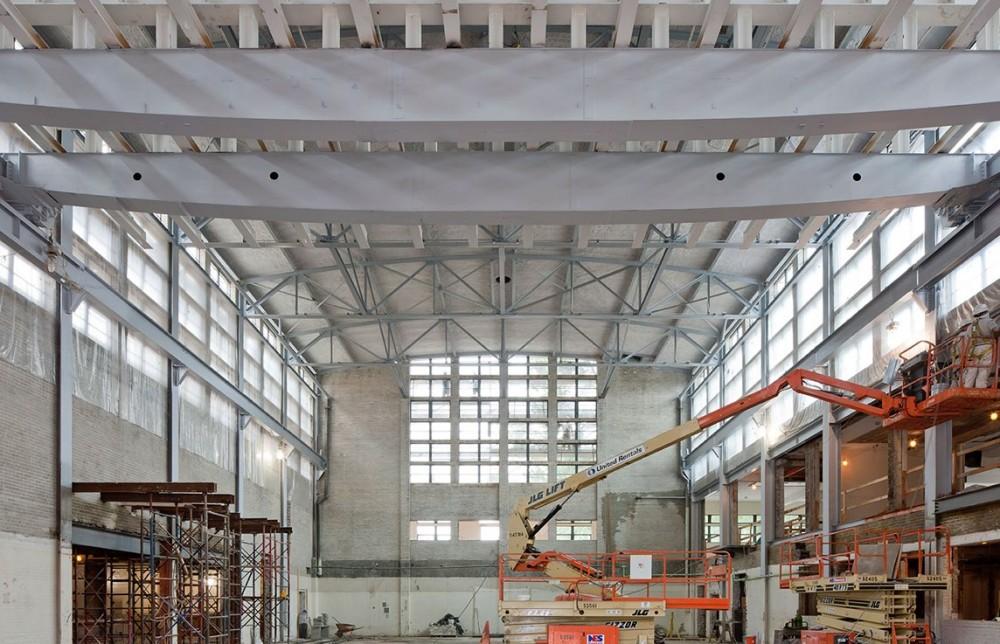 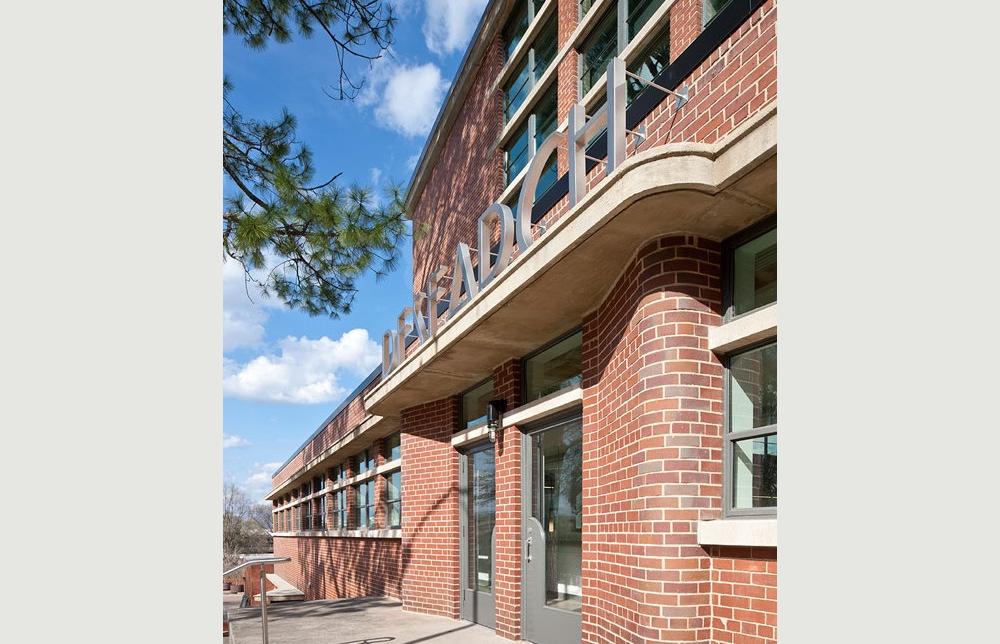 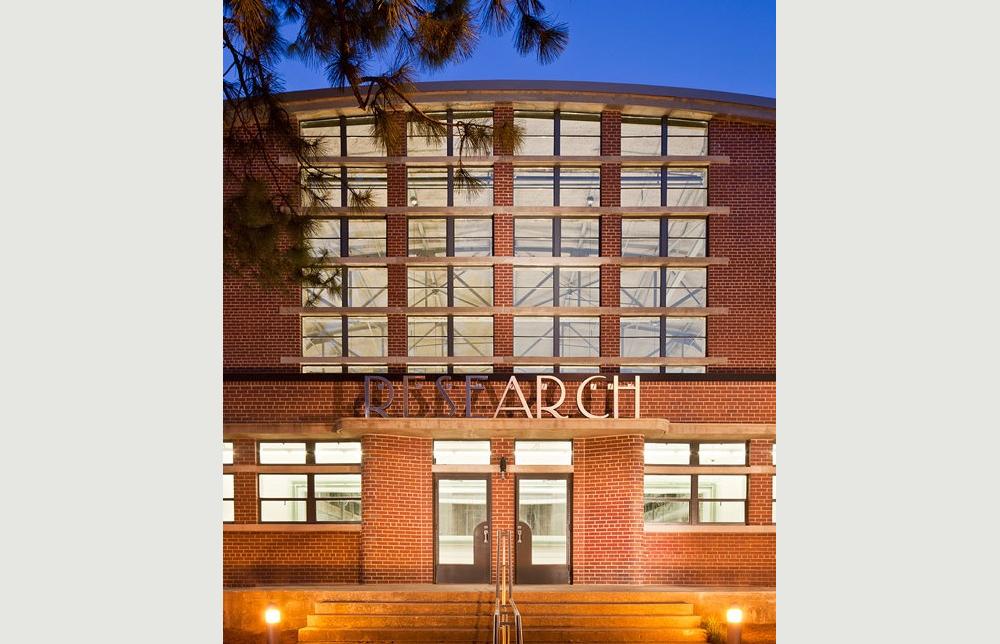 The Hinman Research Building (Hinman), the first freestanding research facility on the Georgia Institute of Technology’s campus, is characterized by its mid-century design, materials and 50-foot high-bay laboratory. Designed in 1939 by P.M. Heffernan, architect and later director of the Georgia Tech School of Architecture (1956-1976), it originally housed the Georgia Tech Engineering Experiment Station. Hinman was partially funded by the Works Progress Administration and built in 1939 for $70,000. It was later expanded in 1951. Early research in microwave and autogiro technology conducted in the building was instrumental in the development of microwave cooking and the helicopter. The newly rehabilitated space includes graduate level architecture studios, computer labs, interdisciplinary research labs, high-fidelity simulation and planning labs, administrative offices, galleries and space for large-scale events. Provisions were made for design studios, computer labs, jury and pinup areas as well as informal and formal public spaces.

The College of Architecture at Georgia Tech has been a leader in design innovation since 1908. Students, faculty and researchers in the Schools of Architecture, Building Construction, City and Regional Planning, Industrial Design and Music work across boundaries to advance knowledge of designed environments at all scales, producing new realms of experience and creativity. Hinman provides a new backdrop and collaborative laboratory for all of the disciplines of the college.

Thoughtful conservation of the original materials and important interior and exterior features has preserved the integrity and legacy of P.M. Heffernan’s Bauhaus-influenced functionalism. The original concrete and steel construction was retrofitted to a LEED Gold standard of sustainability. Hinman’s interior was reconceived within the context of architecturally and historically significant features to accommodate future programmatic needs of the College of Architecture, and to didactically communicate the relationship between the past and future of architectural education at Georgia Tech.

With a radically limited budget, the design concept was to redefine flexibility by differentiating the various events on the ground from functions up in the air. The ground is thought of as an expansive flat field where a variety of spatial organizations may be permitted—as a drafting hall, a ground for large-scale installations, an auditorium, a critique room or a hall for the Beaux Arts Ball. In turn, the section of the building brings the ground to life by hanging the most important attributes of the space aloft:

• The high-bay space features a historic crane from which a dramatic new mezzanine is hung, re-purposing the crane and expanding the usage of the building by 3,000 square feet. A new monumental stair connects the mezzanine and the floor of the high bay to facilitate communication within the building.
• A new spiral staircase enclosed in a sock of expanded cable mesh provides access to faculty offices in the building’s upper floor, activating the building’s southern wing.
• A matrix of custom-designed retractable pendant lights allows the high bay to adapt for film screenings, large-scale model building and other programmatic activities.
• A 40-foot-wide guillotine door, suspended from above, provides added pinup space for reviews and exhibitions when closed, and when raised reveals a large formal critique space that can double as a gallery.

Connectivity within the building and to the campus was achieved by reopening existing windows that that were filled in over the past 60 years and carefully removing select portions of the existing walls.  By opening up a large portion of the north and south High Bay walls, the floor plan offers multiple spaces for interaction while maintaining flexibility. Glazing the existing windows on the west and introducing glass in the high bay overhead door on the east façade encourages greater interaction with the rest of the campus.

In addition to carefully reviving and reglazing several key openings, the original steel windows of Hinman  were substantially intact and rehabilitated in place. The design team investigated several options ranging from complete replacement to minimal repair. An energy model was developed to provide annual energy costs to compare against the cost of improvements. After study, the most cost–effective option was to replace the steel frames only where absolutely necessary, refurbish the vast majority of frames, and provide new low-profile insulated clear glazing units with a high-performance coating. As a result, we were able to retain the character of the historic windows while improving the energy performance of the building envelope by more than 15%.

At the Hinman Research Building the team was faced with many challenges in restoring the cast-in-place and precast concrete. LAS worked with a historic concrete specialist, Paul Gaudette from Wiss Janney Elsner to understand the challenges and work through a methodology for determining the best solutions for the building. Many of the cast-in-place concrete ledges had spalled concrete and exposed rebar. There was efflorescence and the presence of asbestos in former coating materials. The precast concrete sills were failing—particularly on the High Bay portion of the building. Over time, water had infiltrated the sills causing the rebar to expand and the concrete to crack and break off.

By testing the concrete early, the design team was able to eliminate any overarching problems with the historic concrete and to give concrete manufacturers base data on the original mixes and aggregates of the concrete. Early mock-ups performed before the completion of Construction Documents enabled the team to determine repair methods for both the concrete and the adjacent steel windows.

The Building Information Modeling (BIM) was successfully used on this historic preservation adaptive use project exemplifies the high degree of collaboration between the architectural team and the construction manager, The Beck Group. Beck converted the architect’s BIM model to a construction-level BIM model that incorporated laser scans of the space to seamlessly achieve the project design within the construction budget and schedule. In addition, Beck created intelligent models to support the design, fabrication and installation of architectural millwork. At the completion of the project Beck provided a complete model of the building including facility management functionality, enabling Georgia Tech, to monitor the building’s performance over its life cycle.

The rehabilitation of the Hinman Research Building has added greatly to the value of an architecture education at the Georgia Institute of Technology. Its studios have become among the most desired workspaces on the campus, forming an informative and livable example of how successful the reuse of past buildings can be.