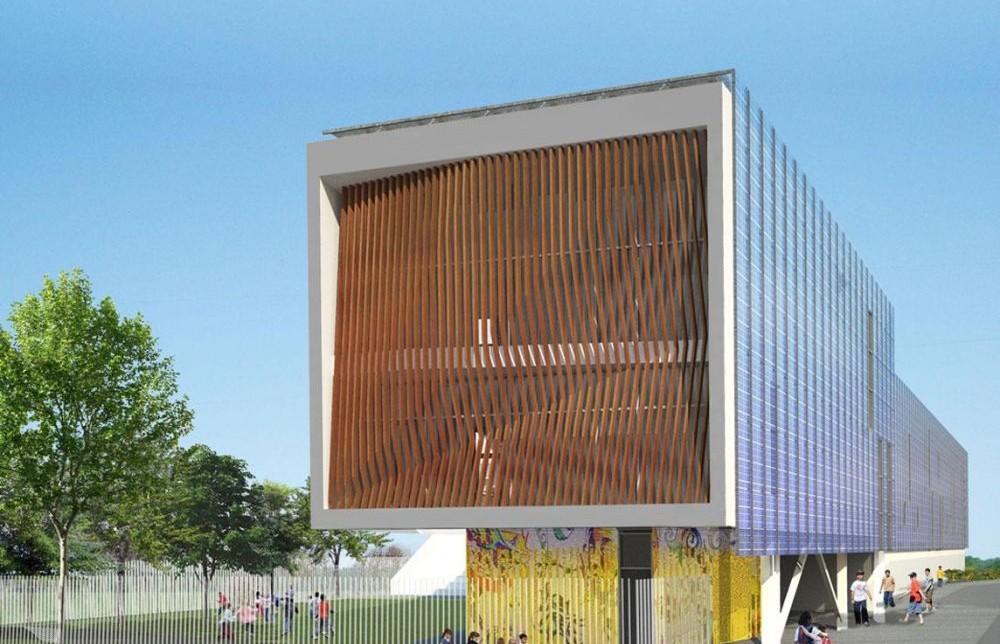 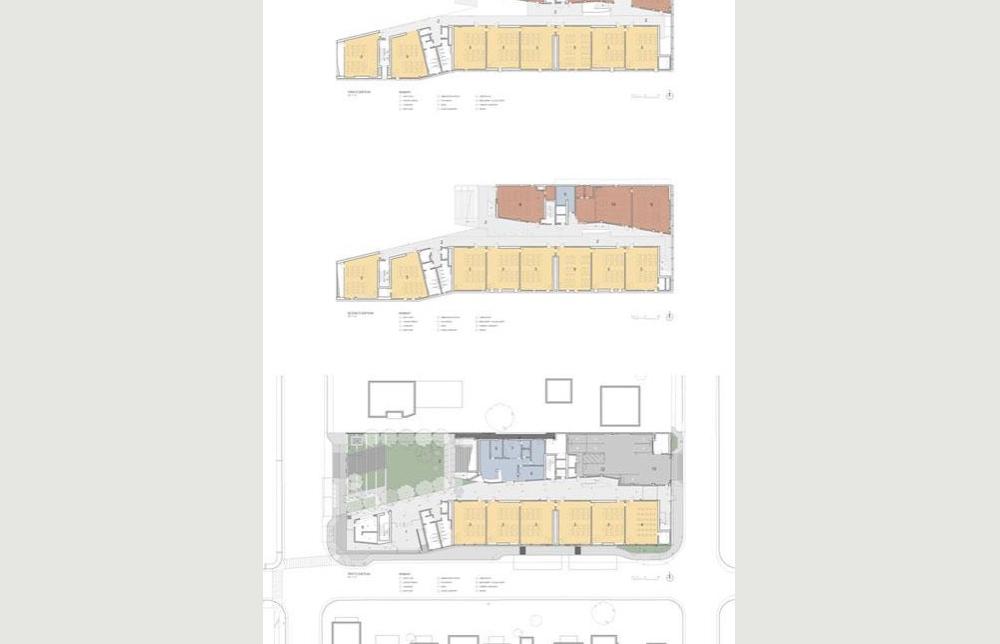 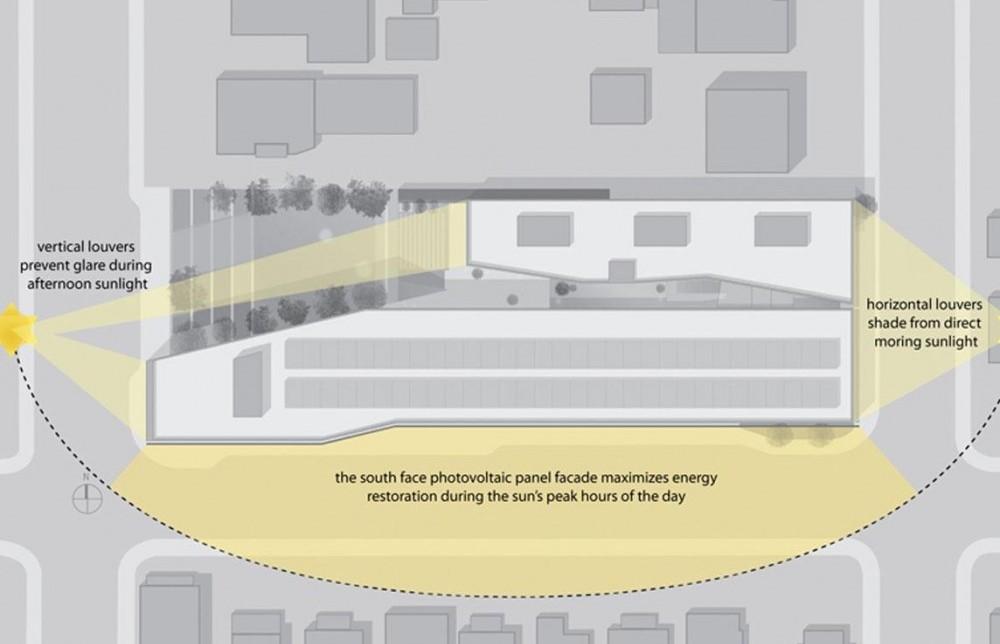 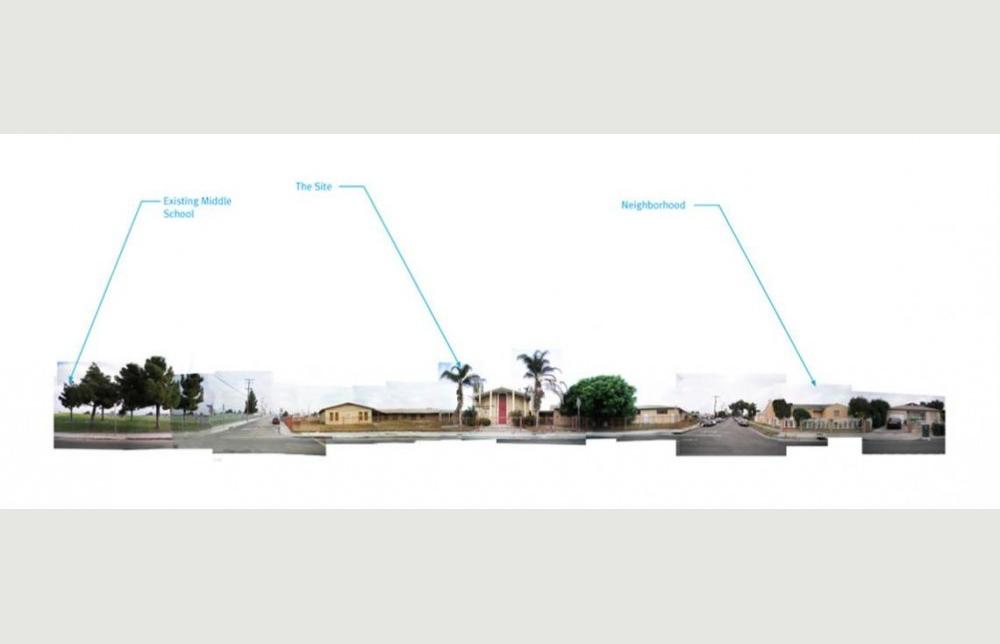 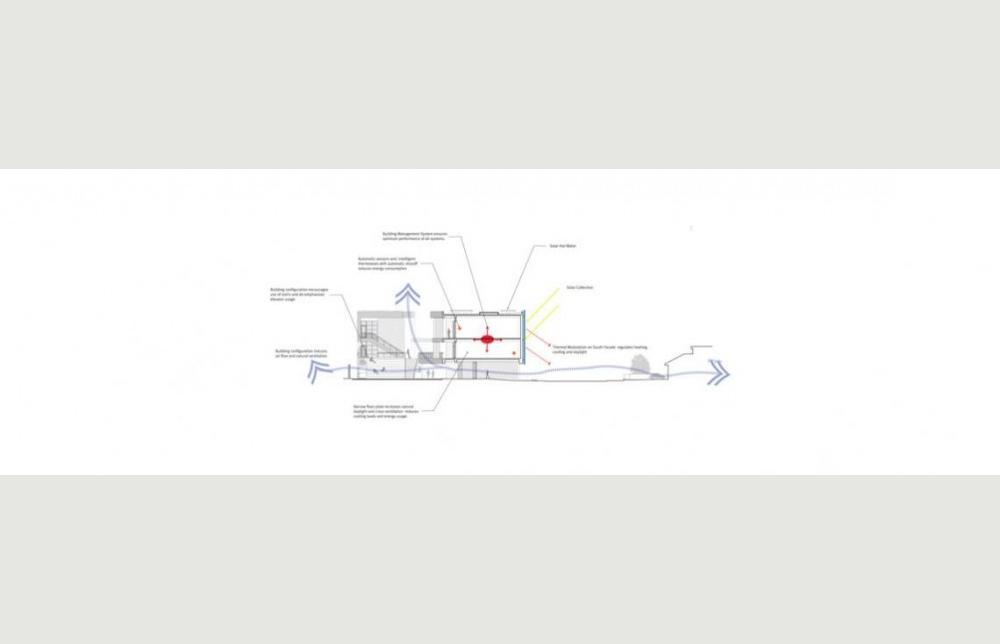 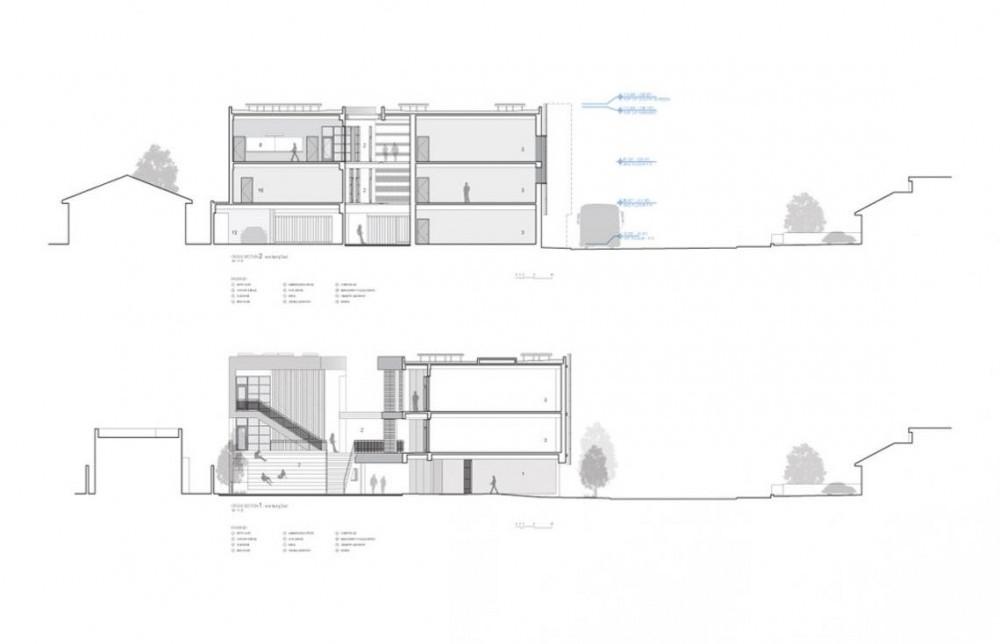 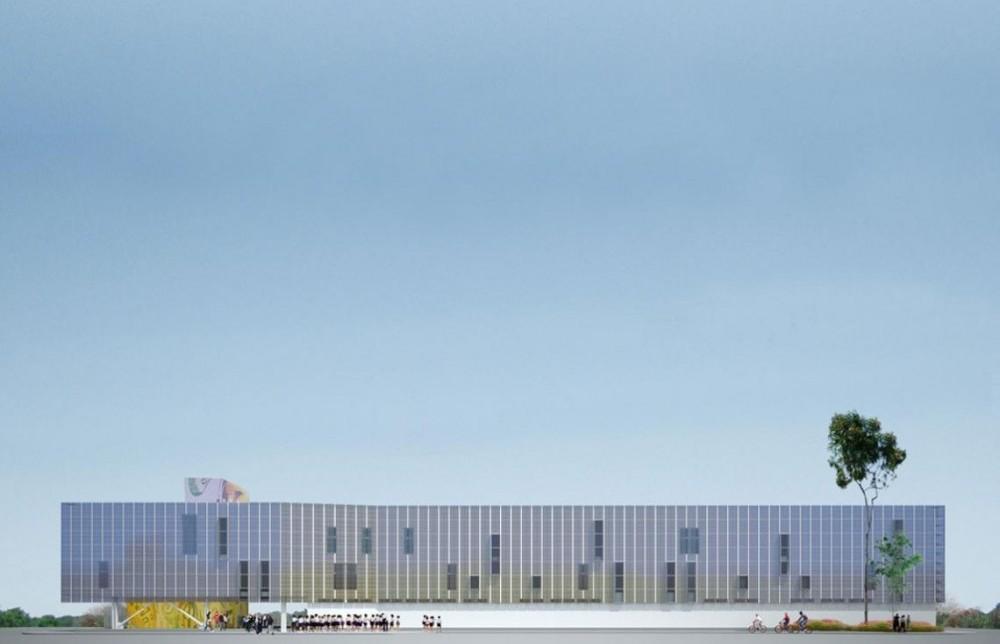 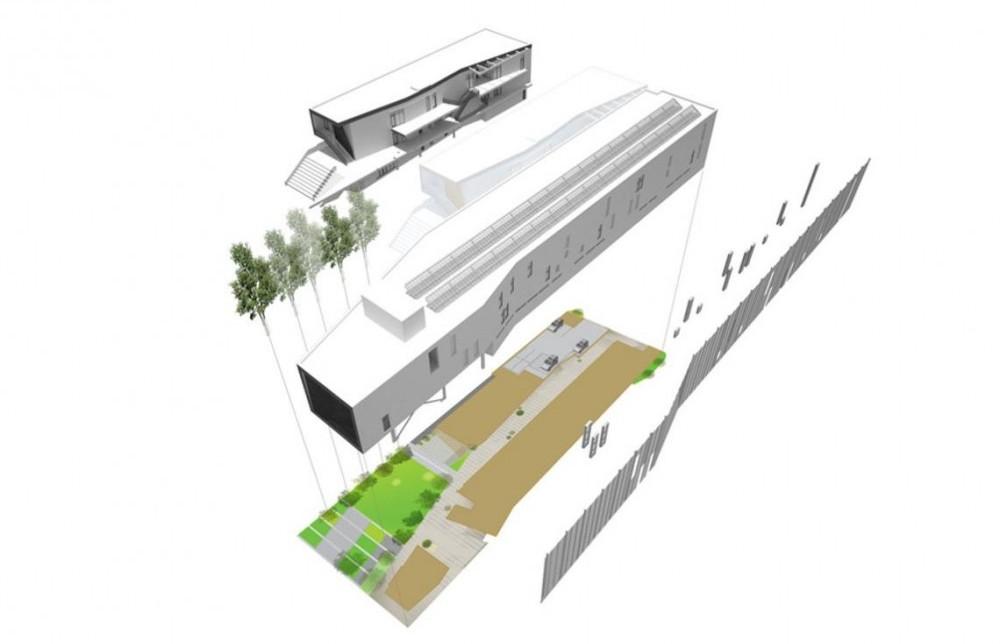 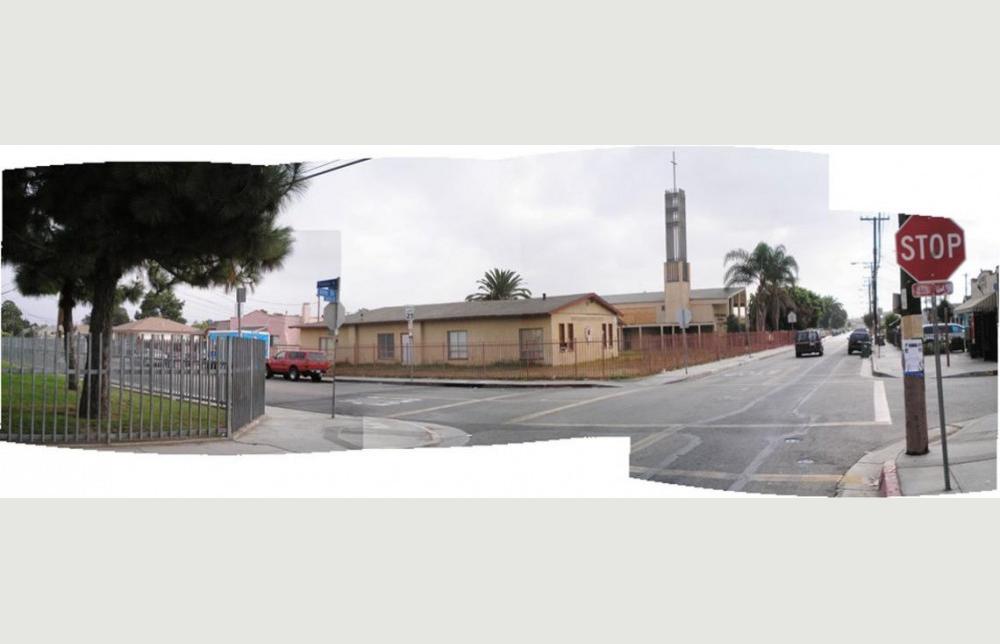 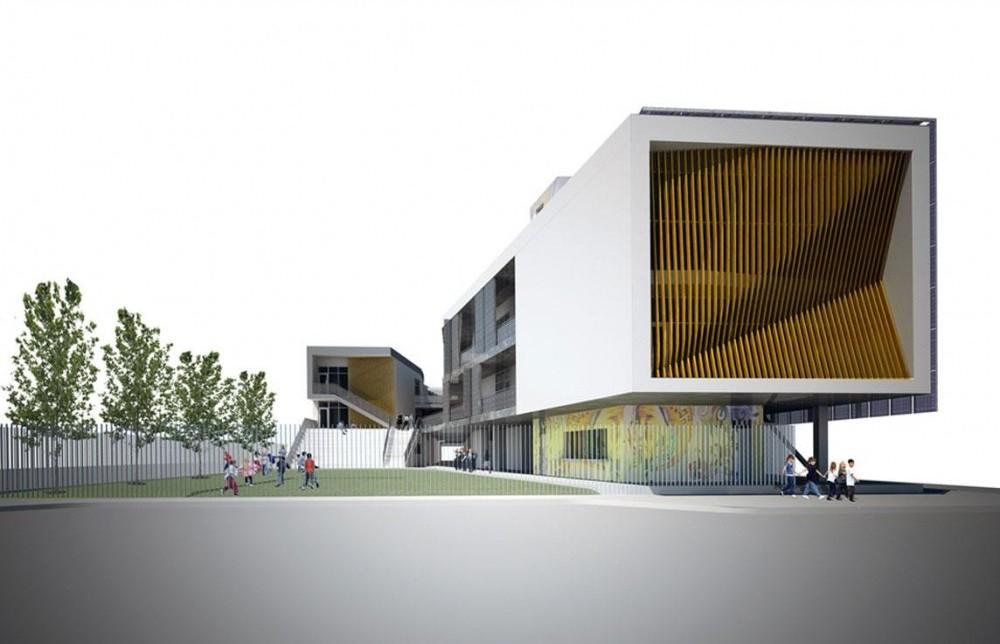 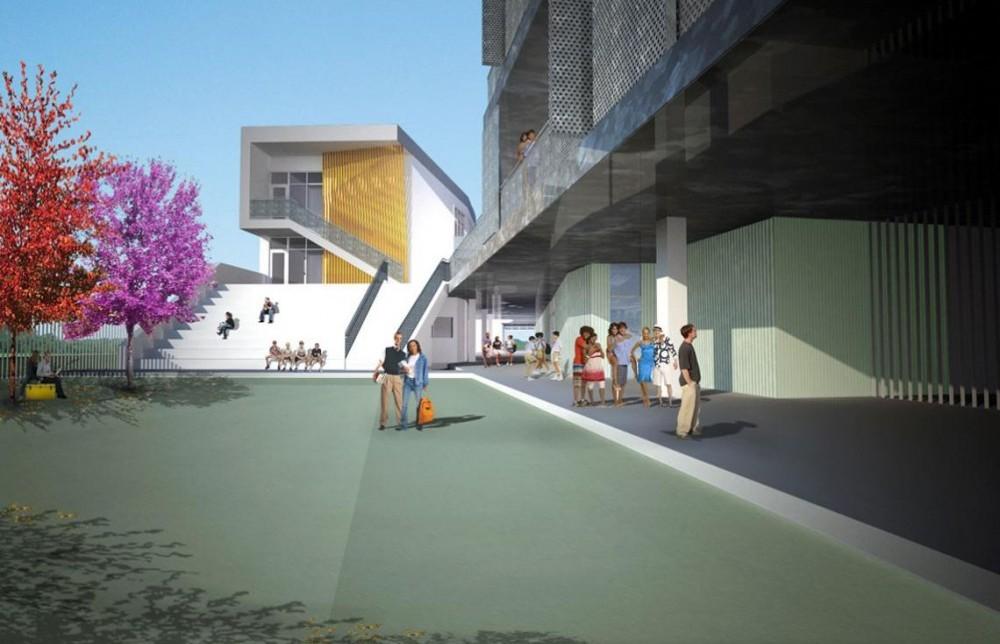 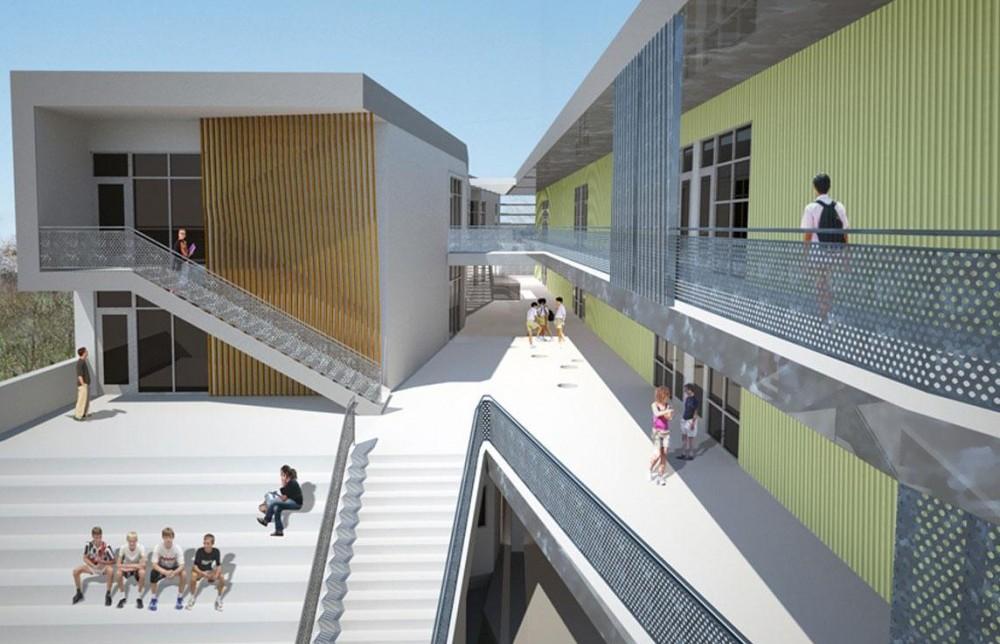 The greatest challenge for the new Animo Leadership High School was posed by the site: undersized and split into two parcels separated diagonally across an intersection. The school building site was originally occupied by a single-story church and school; the gym site was formerly a parking lot. Compounding these issues is the school’s location, near Los Angeles International Airport and within a quarter mile of the 105 Freeway—adding noise and air quality to the list of concerns. The parcels’ small size and disjointed nature made the school’s organization a paramount priority. The solution was to concentrate the programming with the most daily activity on one site: classrooms, administrative offices, and support facilities, such as the library and laboratories. The other site was used to accommodate large assembly spaces that incur less frequent traffic, in this case the multipurpose gymnasium and a large studio space for music and dance. With a project target of CHPS and/or LEED Certification at the minimum, aesthetics, sustainability, and cost-effectiveness were considered in every design decision. The south facade is clad with 650 solar panels. When completed, the project is expected to reduce carbon emissions by over 3 million pounds annually. Taking full advantage of the region’s temperate climate, the designers eschewed the fully contained “big box” idiom of conventional schools on the primary use site. Instead, a landscaped courtyard with multifunctional “bleacher” terracing flows into the open-air covered lobby and the multilayered paseo, lending the school the appeal of a collegiate campus and offering significant environmental benefits—improving daylighting and access to fresh air both inside and out—while providing substantial cost savings by limiting electric lighting and thermal conditioning to the smaller enclosed spaces. Faceted, ribbed screens appear as a façade motif; both visually connecting the school with the community and modulating light to protect from the building from unwanted solar heat gain. Solar panels form the screen system on the longest façade of the building; augmented by additional panels on the roof, they will provide clean, renewable energy for the school. Additional features include: – Capturing storm water runoff from the site and the roof of the building and allowing it to re-enter the groundwater table through seepage basins. – The recycling of building materials during the partial demolition of existing facilities. – Providing bicycle racks for 5% of the student population. – Using Energy Star roofing to reflect the sun’s heat and help keep the building cool. – Waterless urinals and low-water-usage toilets. – High Performance Glazing to minimize heat gain. – Extensive Natural Daylighting in most classrooms through the use of skylights. – Meeting stringent Acoustic requirements of dBa45. – The use of high efficiency HVAC units that exceed Title 24 requirements. – The use of high efficiency lighting fixtures inside and outside the building. – Indoor finish materials that have a percentage of recycled materials in them, including VCT tile, Ceramic tile and carpeting. – The use of low-emitting materials to ensure high indoor air quality and preventing the development of mold.