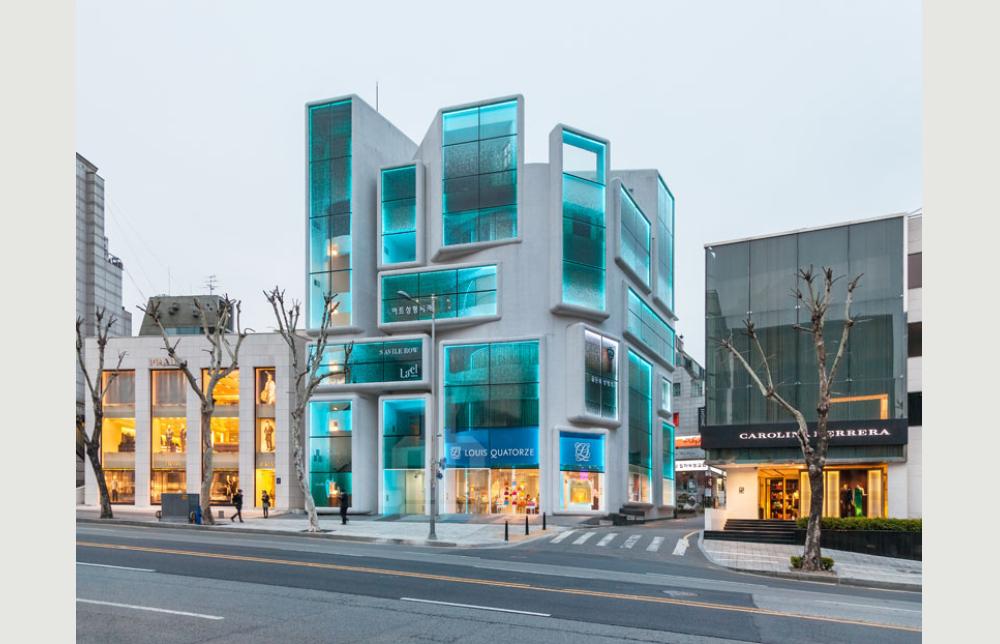 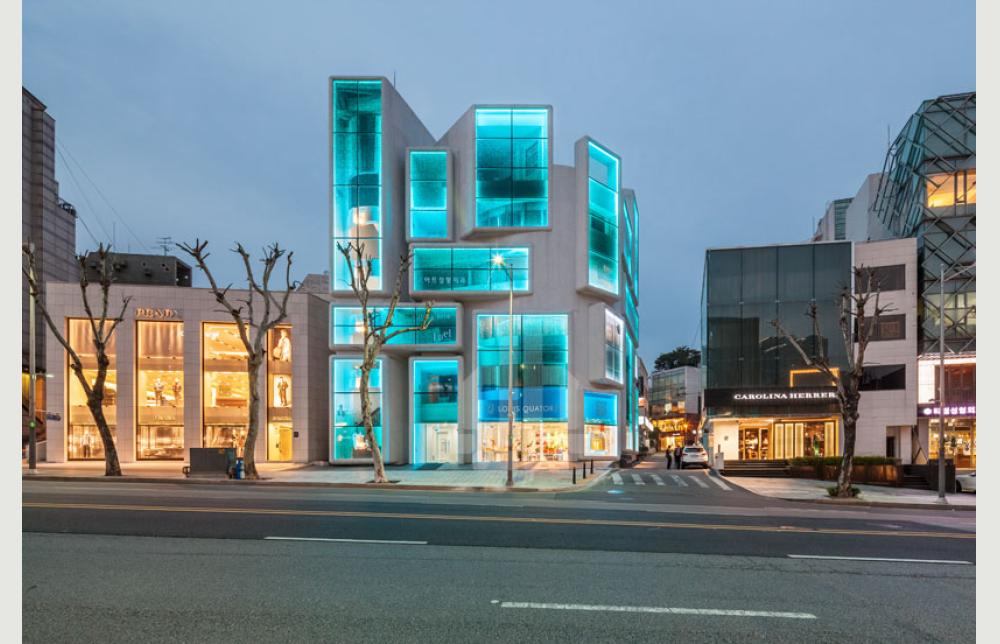 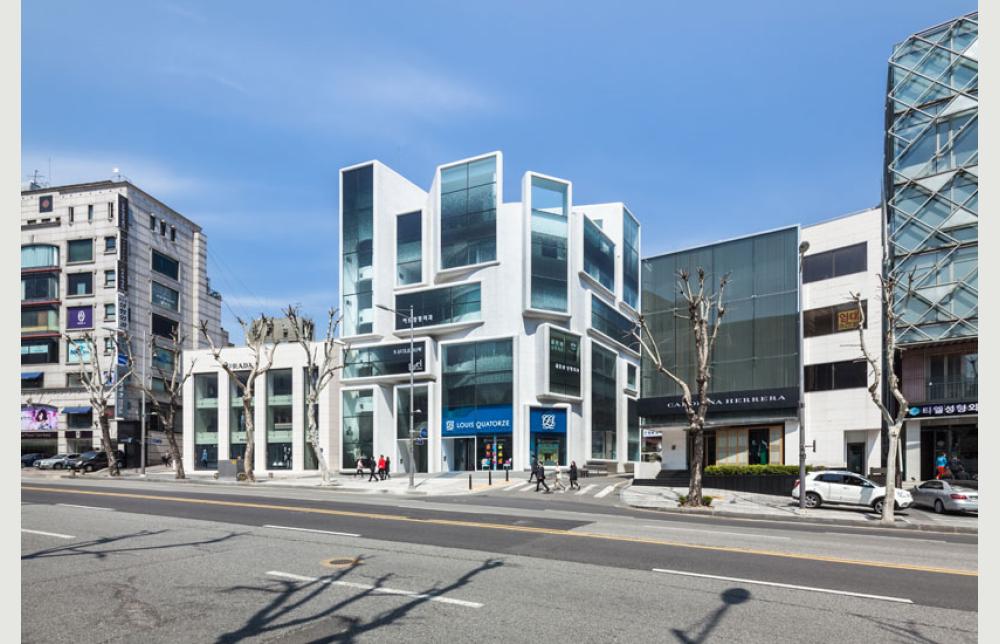 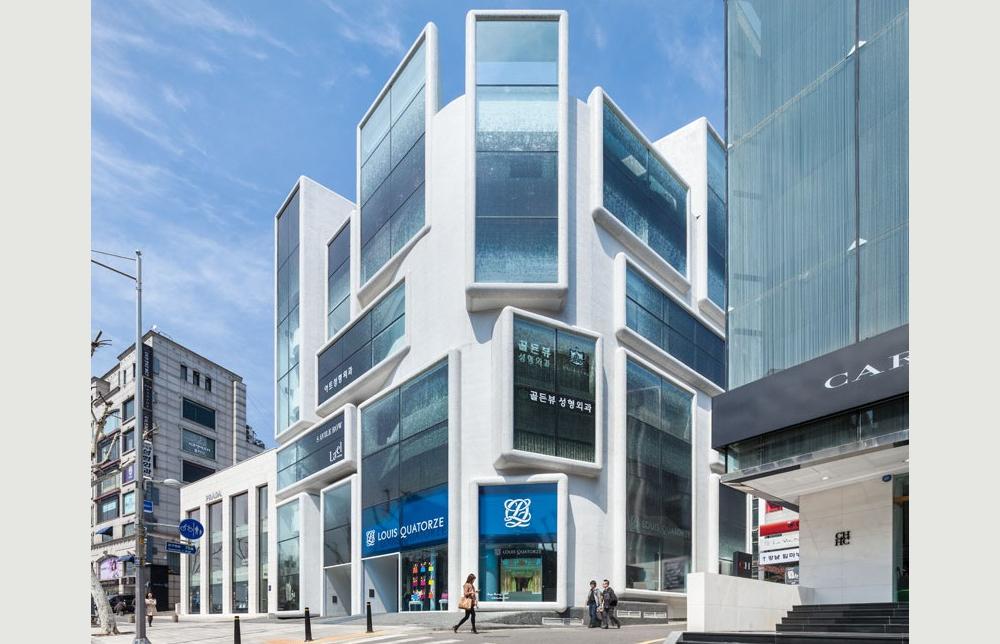 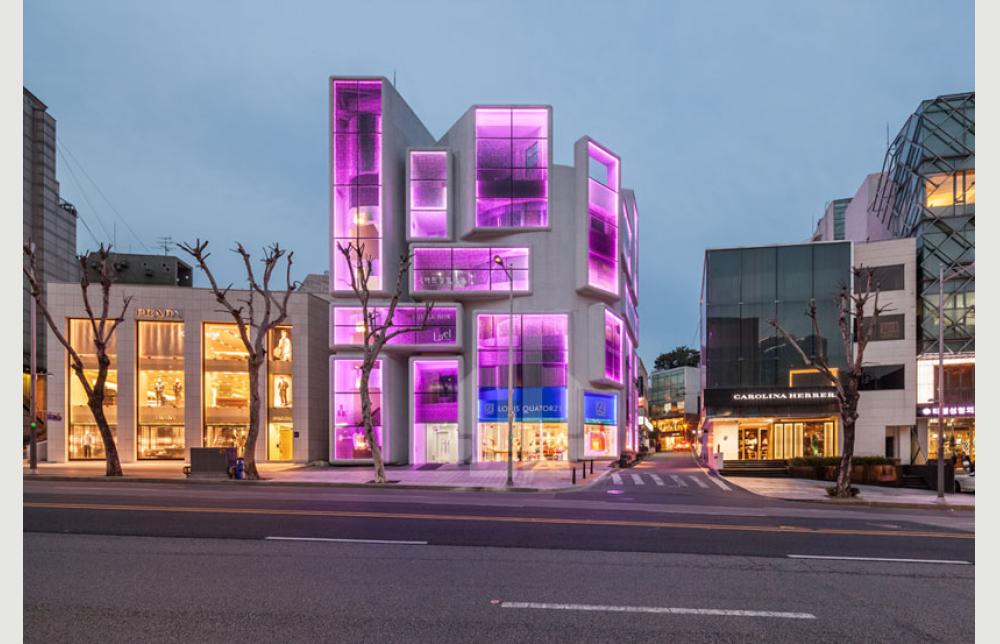 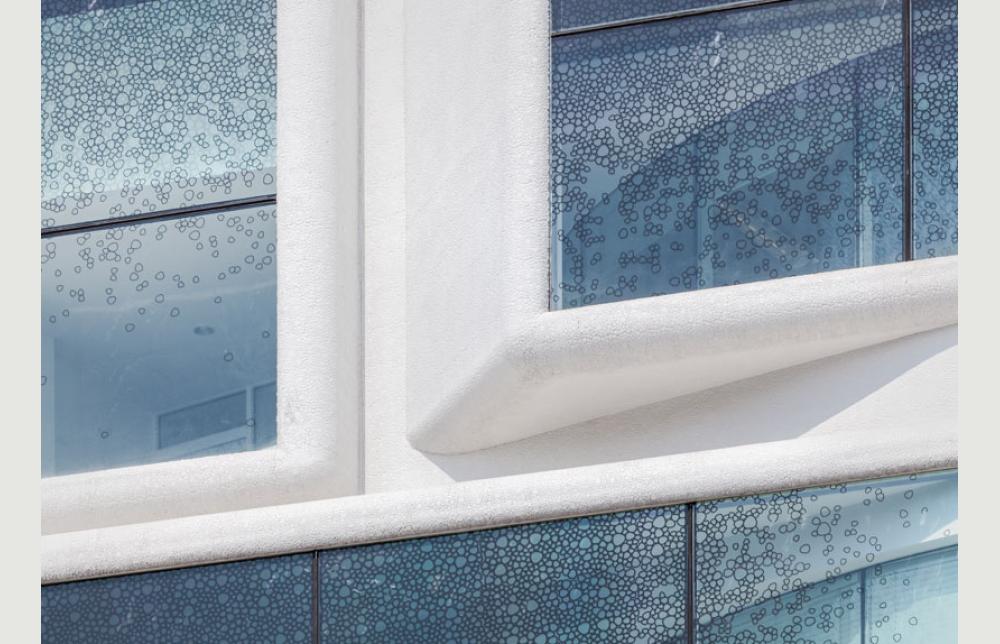 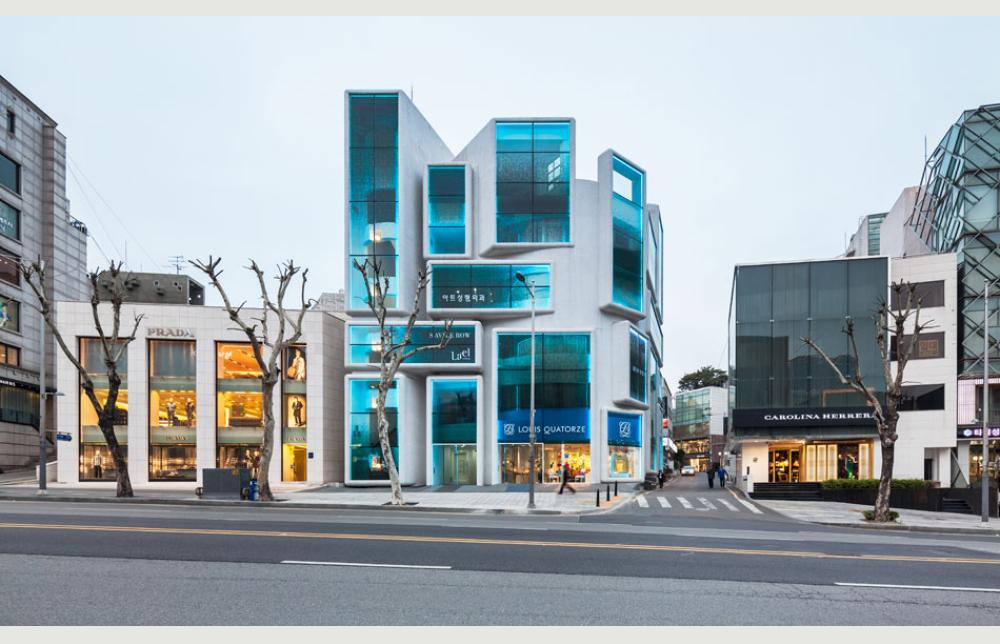 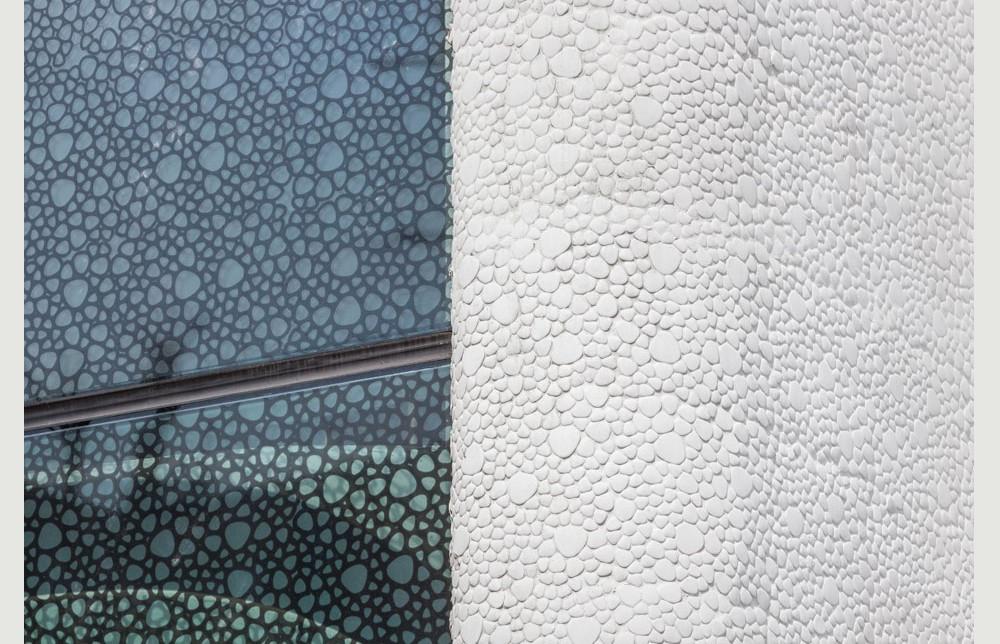 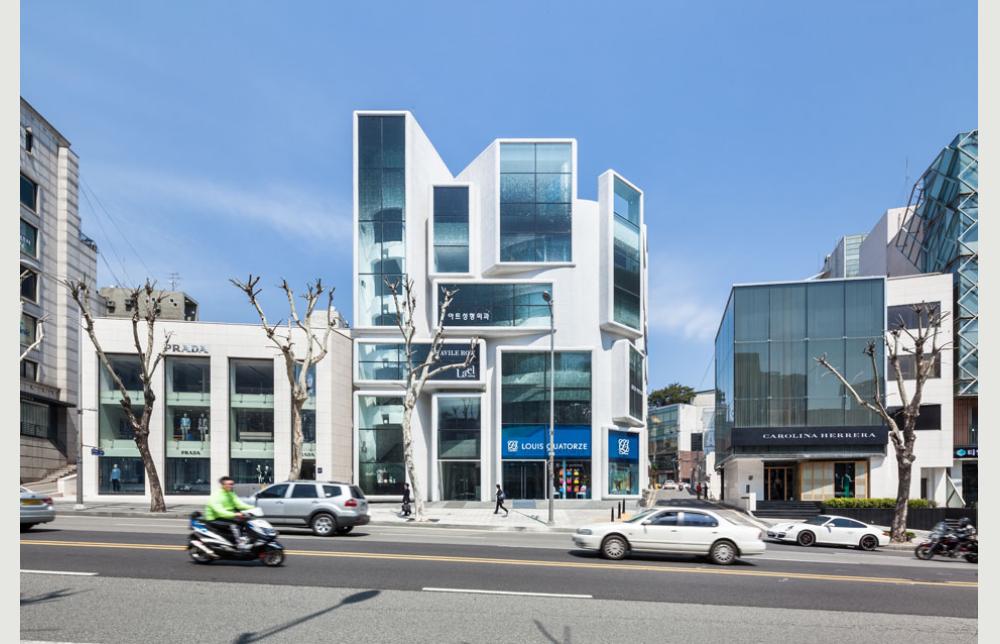 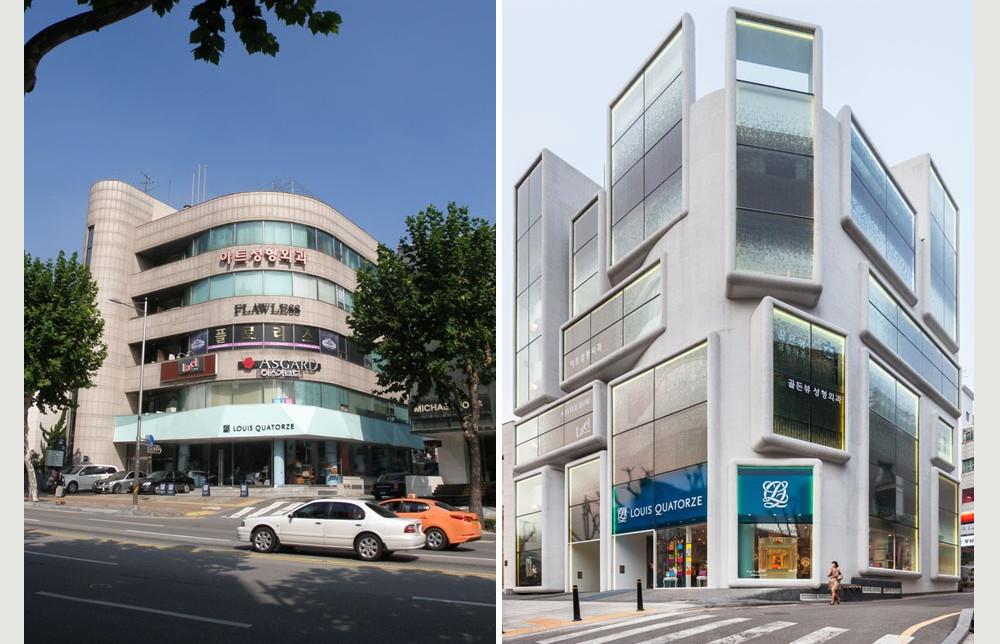 Just before a Korean pop-song became a global success on YouTube for the first time in history, and Gangnam became world famous as the nouveau riche hangout of the South-Korean capital Seoul, MVRDV was commissioned by Woon Nam Management Ltd. to redefine a building on Gangnams chic Apgujung Road. Even though the Chungha building was completed in the 1980s it was already outdated in a street dominated by flagship stores. The transformation, which added an extra level, was completed in just 9 months.

The Chungha building had become a rotten tooth in a fast changing streetscape dominated by single brand stores, this building contains a collection of brands in one. On the previous façade, a motley collection of fonts competed for the attention of passersby. The sober buildings beige natural stone façade was ruined by commercial messages. The ground floor is occupied by French leather accessories label Louis Quatorze, the floors above hold a wedding planners office, the clients maintenance society and two plastic surgery practices. The discretion required by the clients of the plastic surgeries also had implications for the building. The windows of these floors were hermetically sealed, adding to the worn out feel of the structure.

The new façade concept is convincingly simple: Chungha is a multiple identity building which was transformed into a collection of shop windows so each commercial venture imposed onto the façade would have a fitting canvas for its display. The buildings façade becomes more advertisement, and in that sense paradoxically more honest.

Curvaceous frames were found to be the best match to the large amount of shop windows, and a mosaic tile consequently became the façade material to follow the curves. LED lights change the buildings appearance. MVRDV was given nine months to complete the refurbishment. Adding to the complexity was the limited size of the construction site – five storeys tall but only 2,5 metres at its widest point. Construction workers were required to balance and squeeze themselves into narrow spaces.

Once unwrapped, the building appears reborn, its large windows are filled with transparent posters which provide space for changing brand identities and discretion for the clients of the plastic surgeon. A 10% addition on the top floor will be turned into a café with outside terraces, resulting in a total surface of 2,820 m2. The exterior façade tiles, which resemble white foam from close-up and smooth white stone from further away, are also used on the sidewalk and in the lobby.
MVRDV realised Chungha Building together with InC Design (co-architect and project management), Ain Construction, 1st Structure, Total LED and M&S Ceramic.