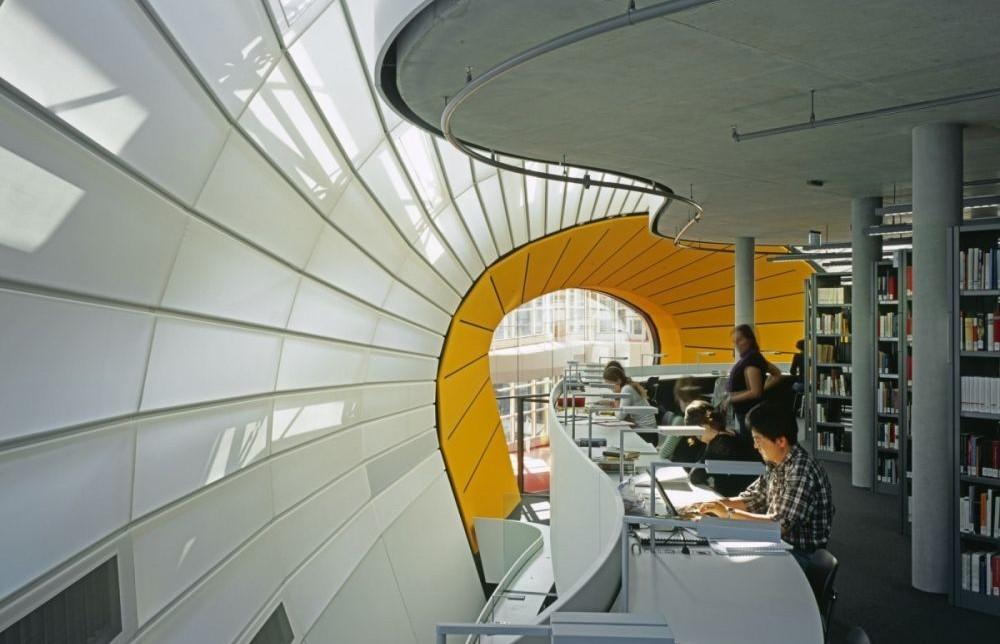 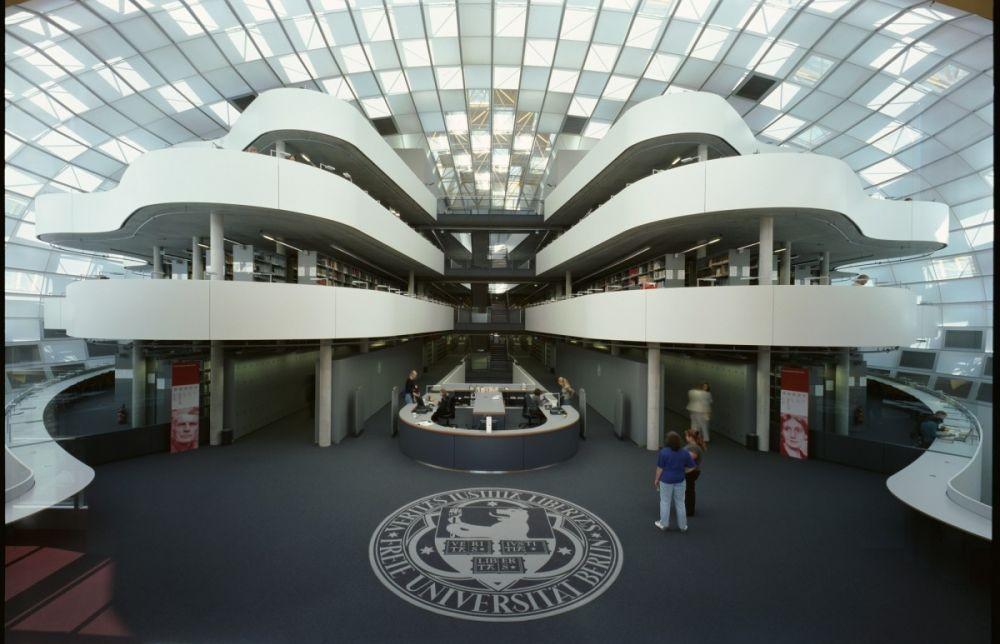 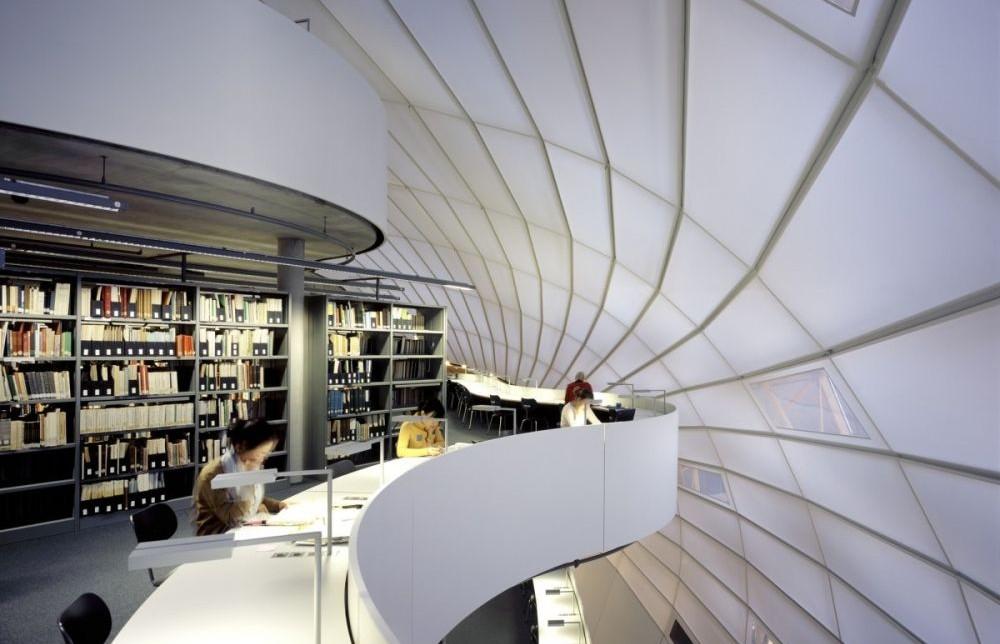 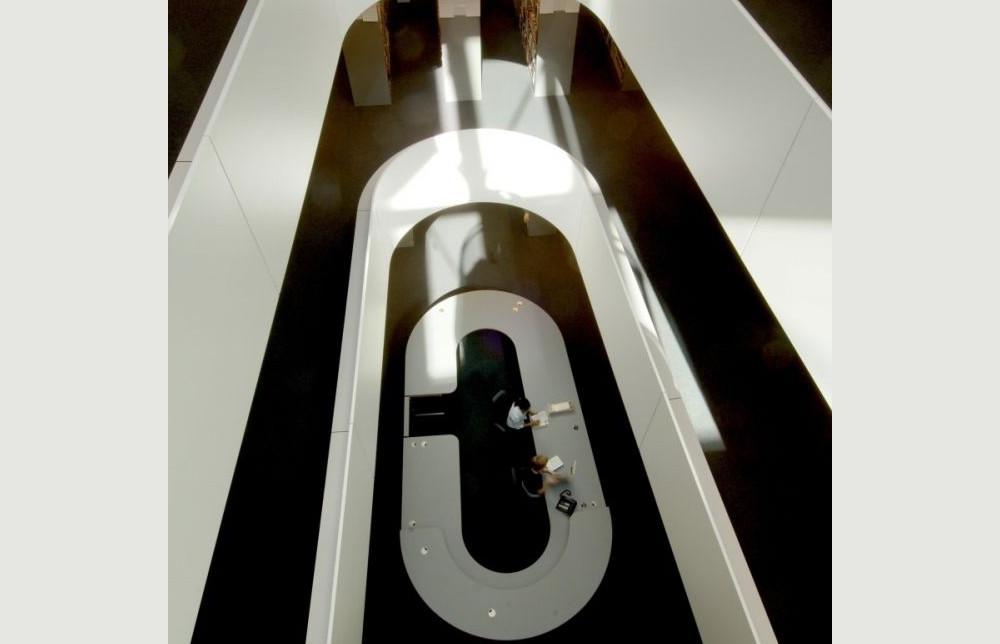 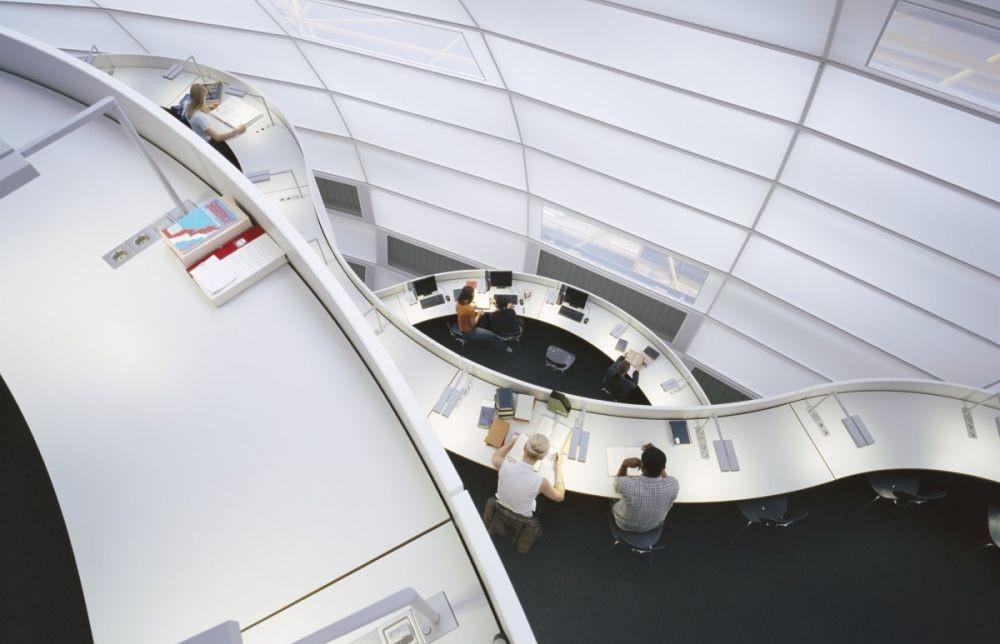 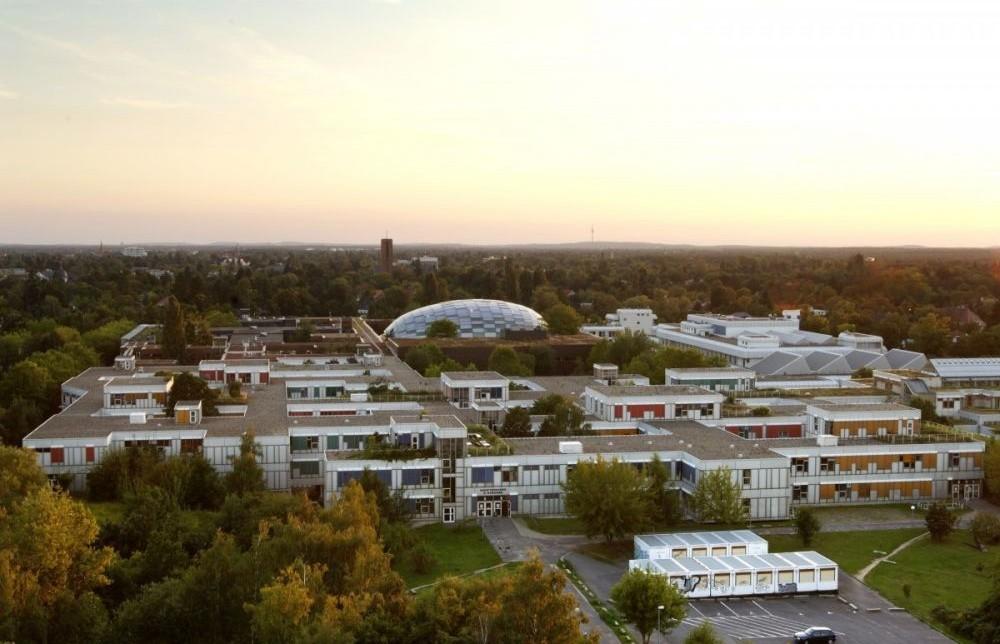 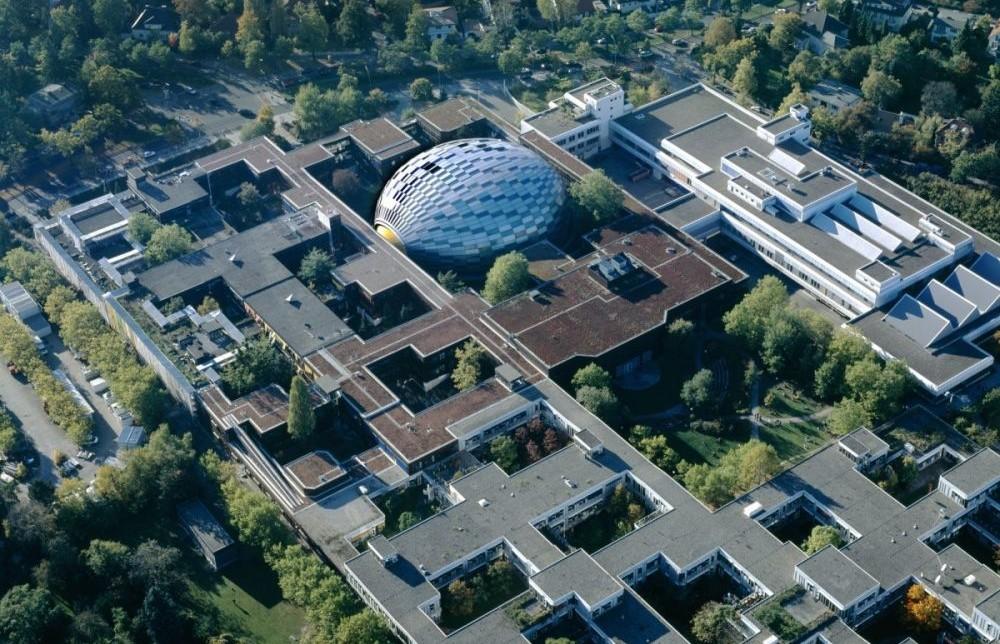 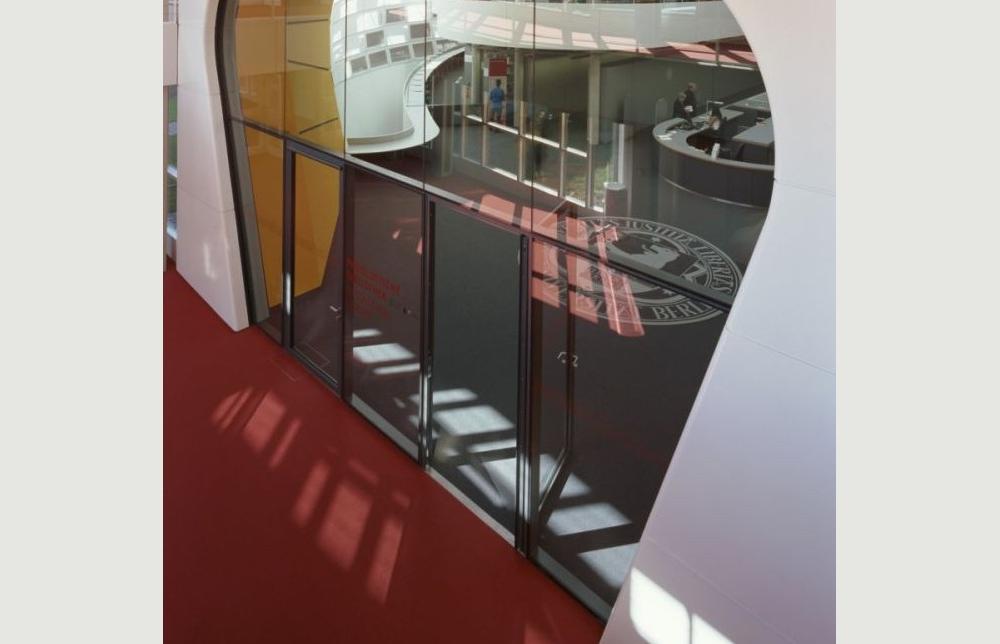 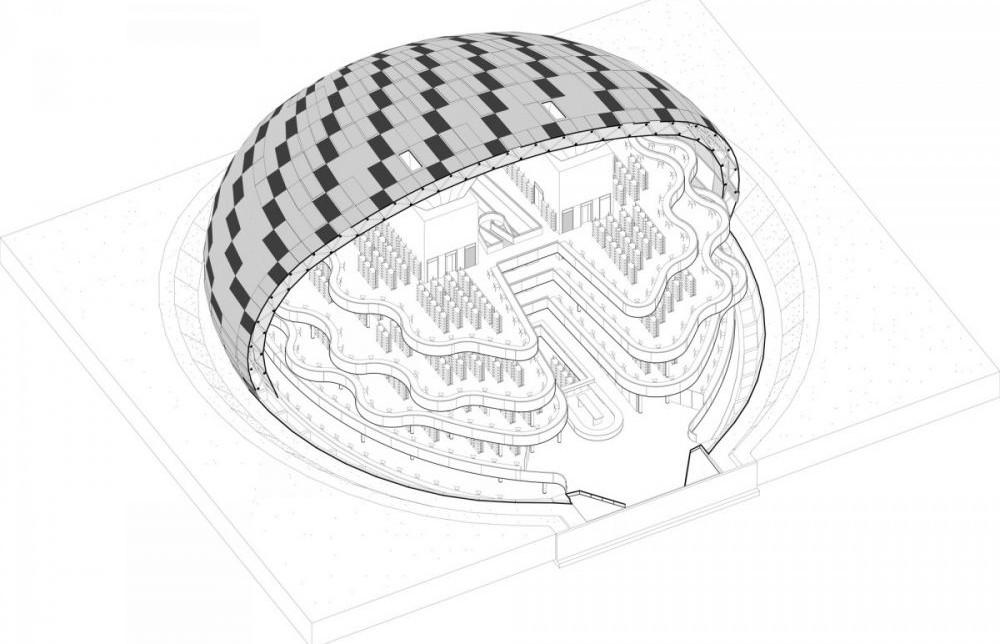 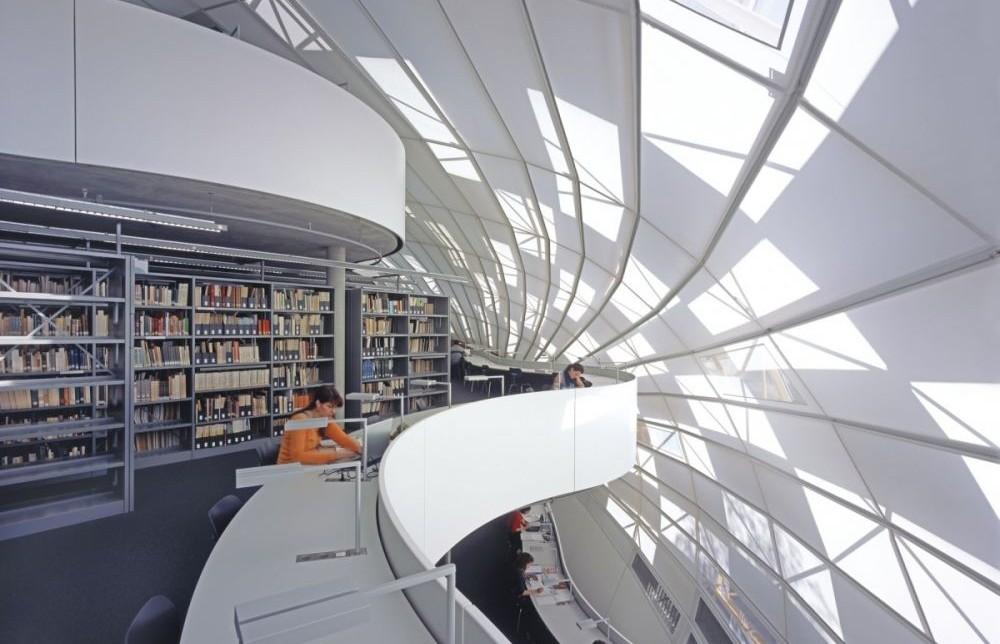 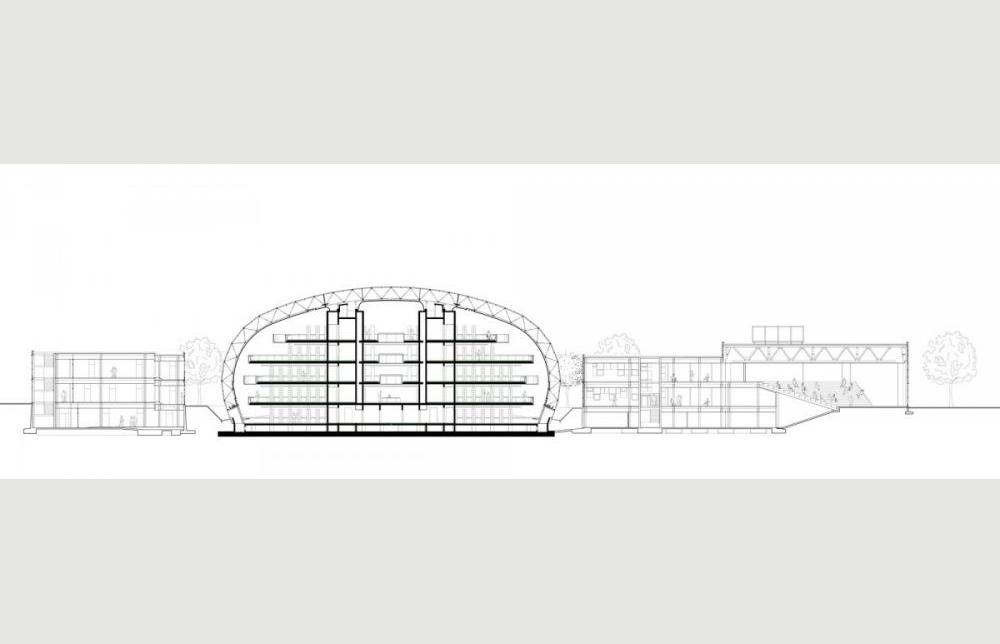 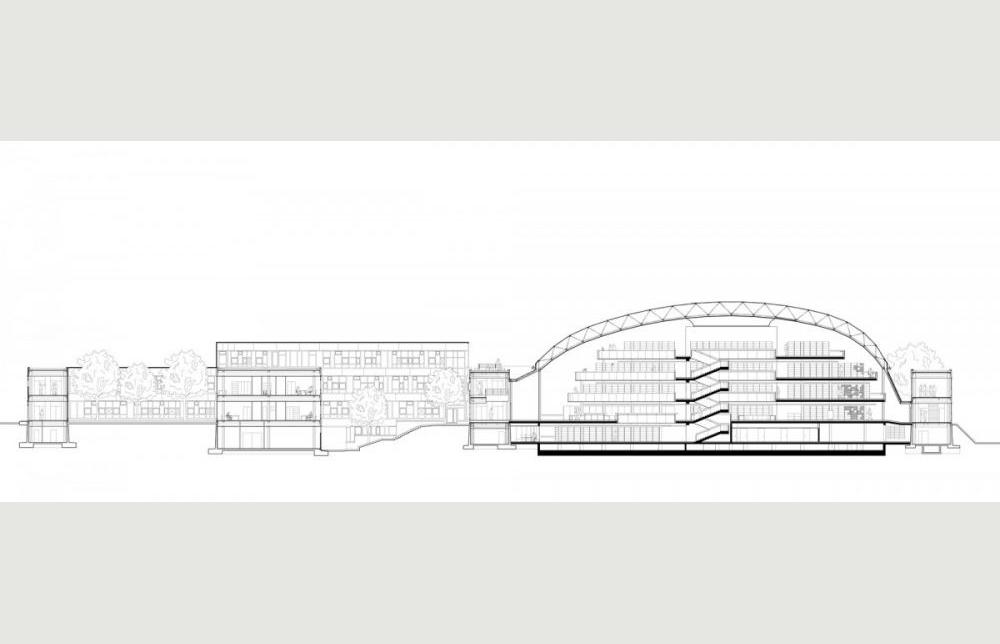 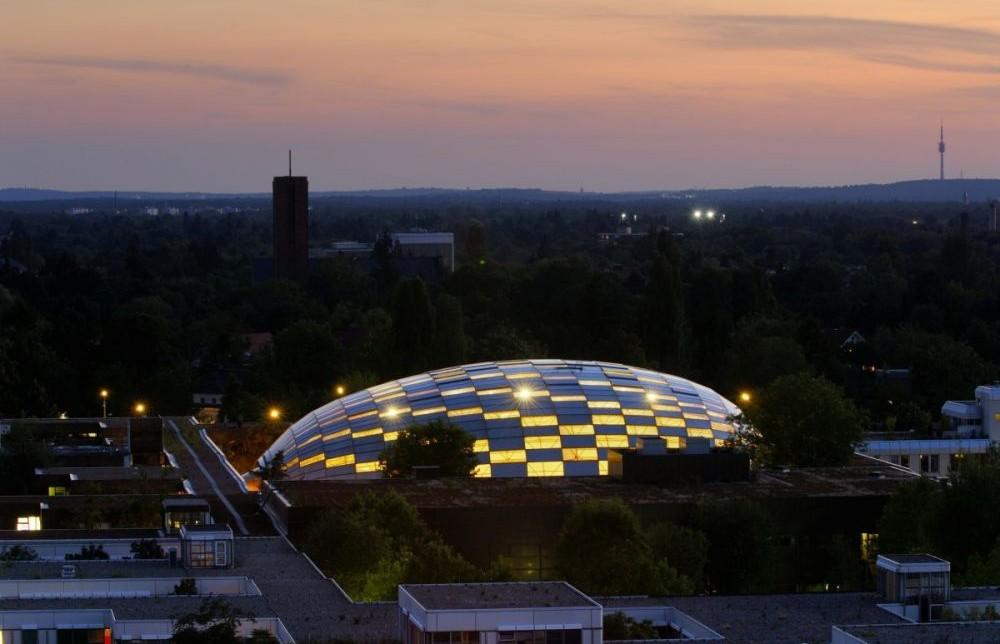 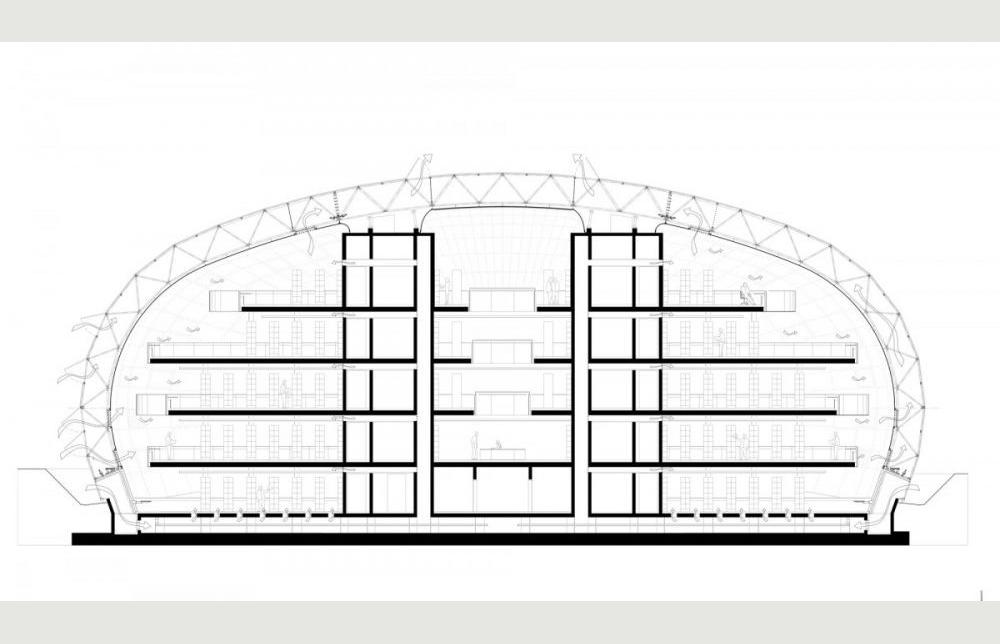 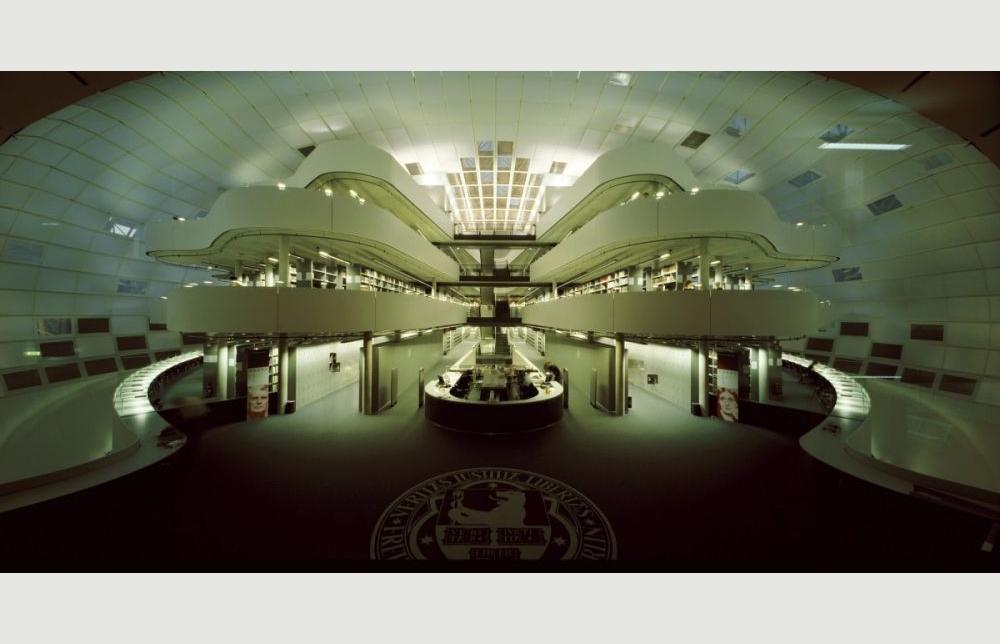 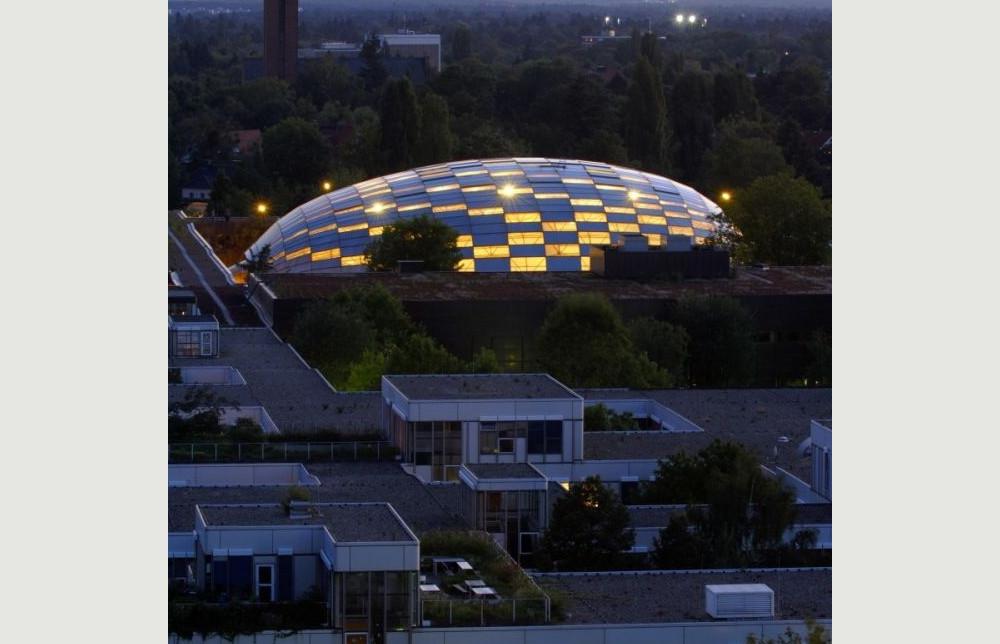 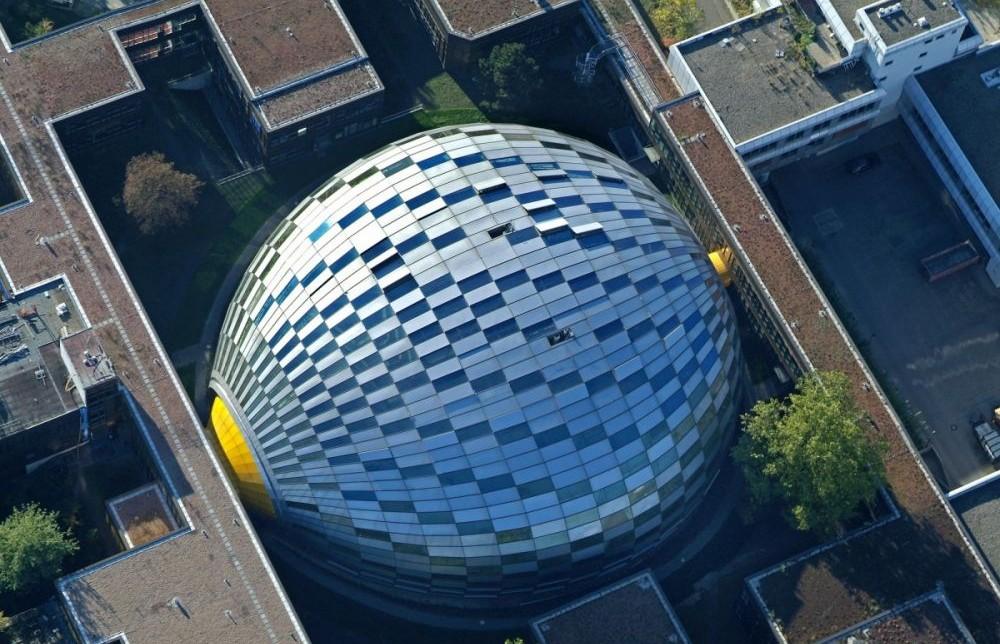 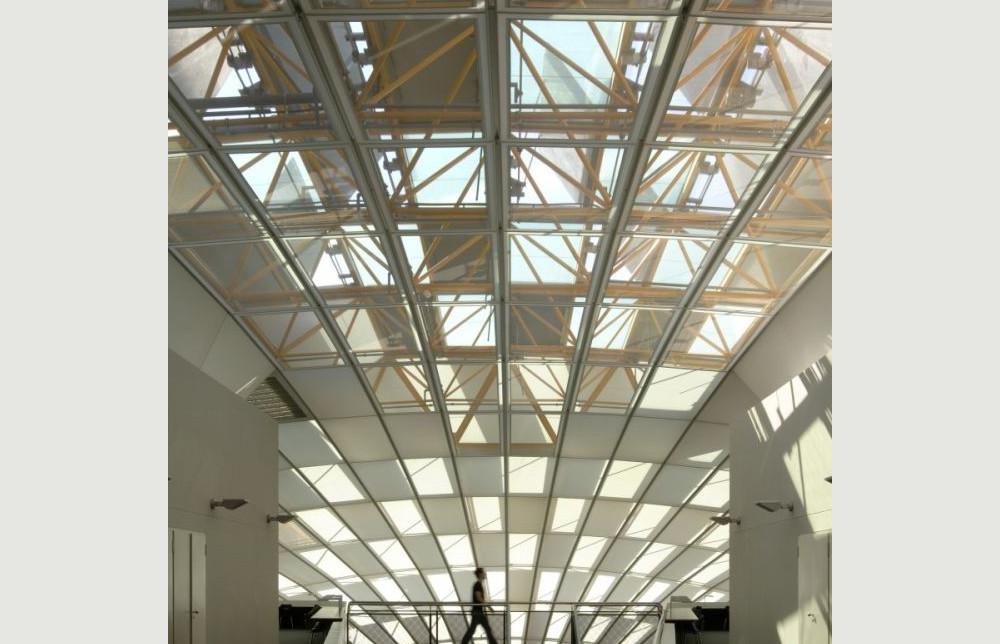 The library is the culmination of decades of research and experimentation by the studio on how buildings can utilise passive and active technologies to radically increase energy efficiency and reduce the impact on the environment. This consists of two interrelated parts: the design of a new central library, housing the collections of 11 separate libraries; and the restoration of the existing campus buildings.

Architecturally, the library combines a massed concrete structure with a light diaphanous envelope. This juxtaposition not only informs the building’s formal character, but is also key to its ecological programme. Describing the impetus behind the design, David Nelson, the senior partner in charge, noted: “We realised that students would spend hundreds of hours in the library and wanted to provide them with the perfect environment to study – one which was animated by natural light and air.” Students can sit at the reading desks that run continuously around each floor plate and access the bibliographic collections which are housed in the four-storey central core.

As the design progressed, the floor plates evolved into a series of undulating curves, which creates a formal dynamism and spacious double-height mezzanine spaces. The library’s aerodynamic water-drop shaped enclosure was developed to house the maximum amount of floor area within the minimum building envelope, remain in scale with the surrounding buildings, and allow landscaped courtyards on ether side of the library. Its unique cranial form has already earned the library the nickname – the ‘Berlin Brain.’

The building enclosure consists of three parts. The external shell is alternately clad in opaque aluminium and transparent glazed panels that correspond to the solar path – helping regulate the internal temperature. In a playful allusion to the importance of colour in the original campus, the supporting steel frame – which is formed of radial geometries – is painted yellow, making the structure legible and emphasising the cavity between the inner and outer skins. A translucent glass fibre inner membrane acts as a diffuser to spread natural light, ‘glowing’ with ambient light throughout the day and subtly registering the weather outside in a dappled play of reflections and patterns over its surface. Views through the transparent panels and openings allow glimpses of the sky above, with the light diaphanous envelope giving an impression of being surrounded by light and air.

The double skin of the enclosure acts as an air duct and thermal buffer, ‘breathing’ by opening and closing different panels. In combination with the mass of the concrete structure, which is a passive thermal store that is further heated and cooled by piped water inside the structure, it acts in response to Berlin’s varying climate. In lower temperatures (below 6°c), the external skin closes like a cocoon and fresh air is drawn through an undercroft and warmed as it passes through by the thermal core. In moderate temperatures (above 16°), a mix of fresh and recirculated air is cooled by the core. While for 60 percent of the year, the library can be entirely naturally ventilated by opening various panels and using controlled fresh air drawn in through the undercroft. During the day the library is entirely naturally lit. These factors mean that the library will consume 35 percent less energy than a comparable building.

The site of the new library was formed by combining six separate courtyards. Together with the restoration of the existing campus buildings, this reorganisation was the second part of the Free University redevelopment. Opened in 1971, Candilis Josic Woods and Schiedhelm’s mat-like campus design was planned to ensure that the buildings could be reconfigured as the university’s needs dictated. Buildings were clustered around a series of internal streets and corridors to encourage open communication, with the faculty and facilities decentralised across the university. As such, the Free University exemplified the architectural experiments of the 1960s by Team X and others who sought to produce an architecture that was itself an organisational structure. Conceived as an ‘ideal city,’ the Free University was immediately hailed as a milestone in university design.

From the beginning of the project, the Foster team was adamant that the existing buildings should be restored along the principles of the original design. The interior layouts were rearranged and rationalised to reflect the contemporary faculty structures and contemporary teaching practices. Wherever possible, the original fixtures were refurbished and all the carpets replaced with duplicates made by the original supplier. In particular, the team were sensitive in their approach to restoring the facade panel system, which was designed by the French engineer, Jean Prouvé, following Le Corbusier’s ‘Modulor’ proportional system and the principles of flexibility and prefabrication.

Although the Cor-ten steel panels Prouvé specified had self-protecting corrosive characteristics, resulting in a reddened colour that is the source of the building’s nickname ‘die Rostlaube’ – the ‘rust-bucket’, these panels were prone to decay and required replacement. In keeping with the original intent, the Foster team reclad the buildings in bronze, which is self- protecting and will eventually weather to a tonal finish that is virtually indistinguishable from the original panels. In addition, the original awnings were replaced to form a colourful juxtaposition against the panels.

As Lord Foster noted, the structural system proved so flexible that much of the remaining structure from the reorganisation could be demounted and reerected in different locations. This proved that “the original design of the Free University was, in many ways, years ahead of its time – an inspiration that we drew from as we designed the new library to be a forward-thinking exemplar of environmental building.”