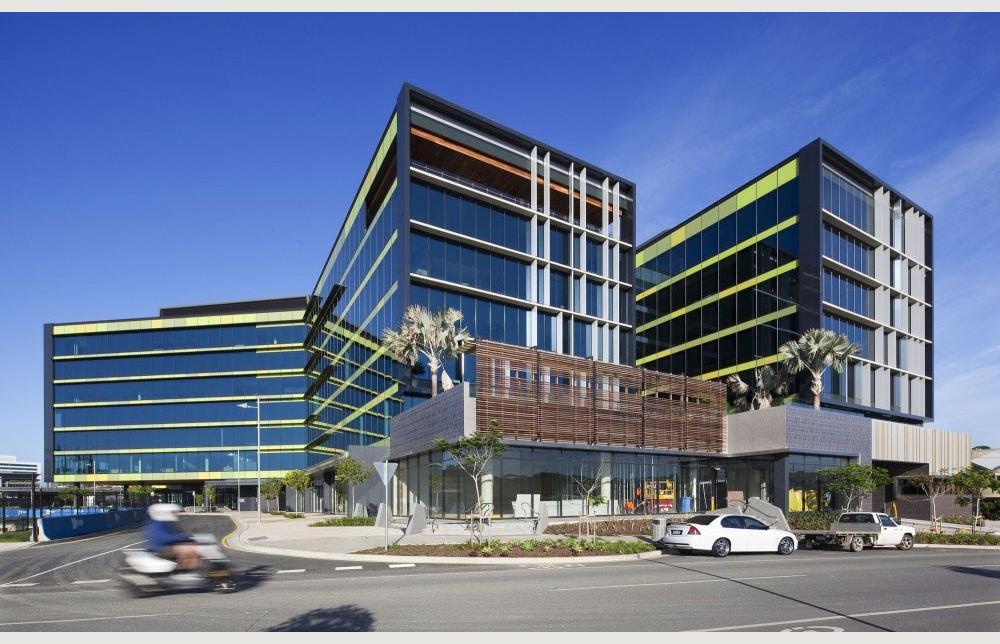 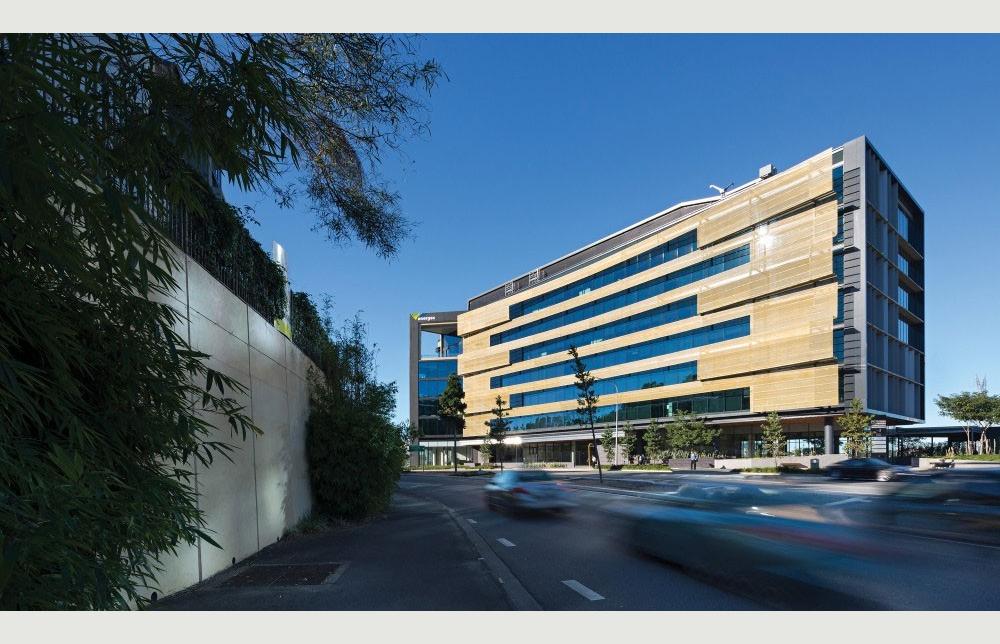 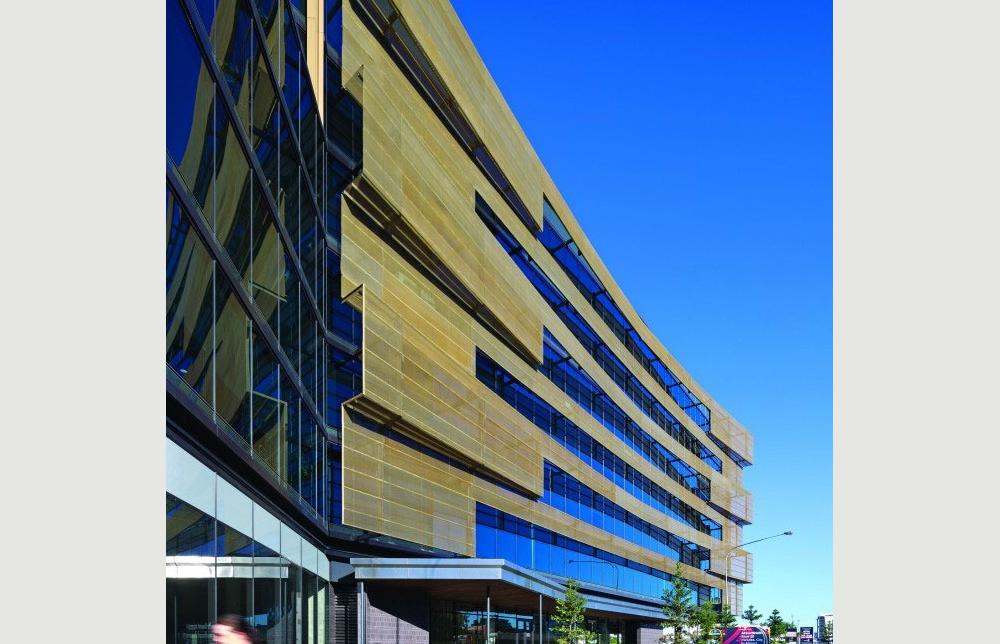 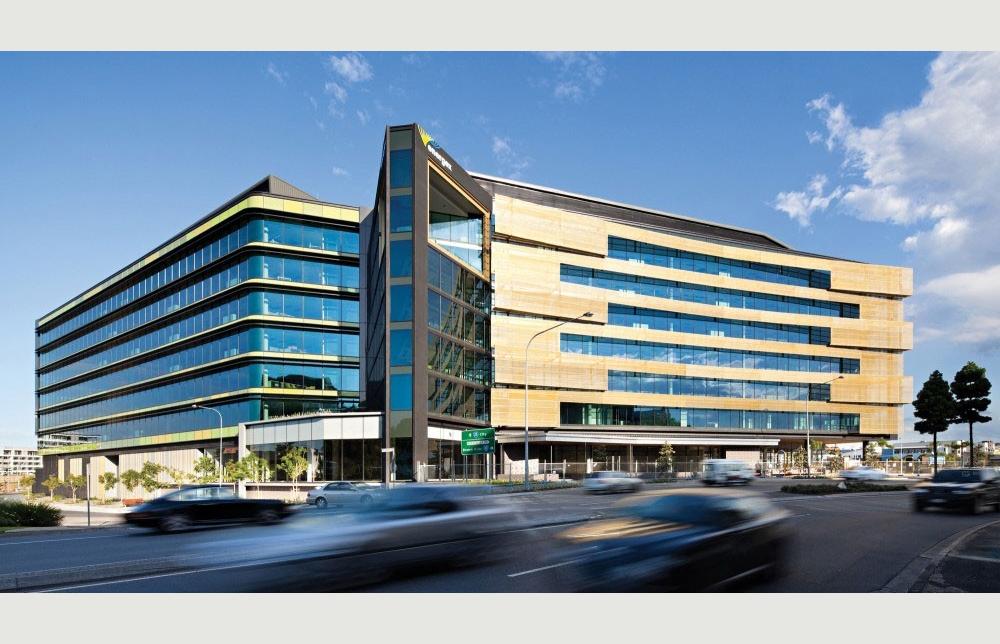 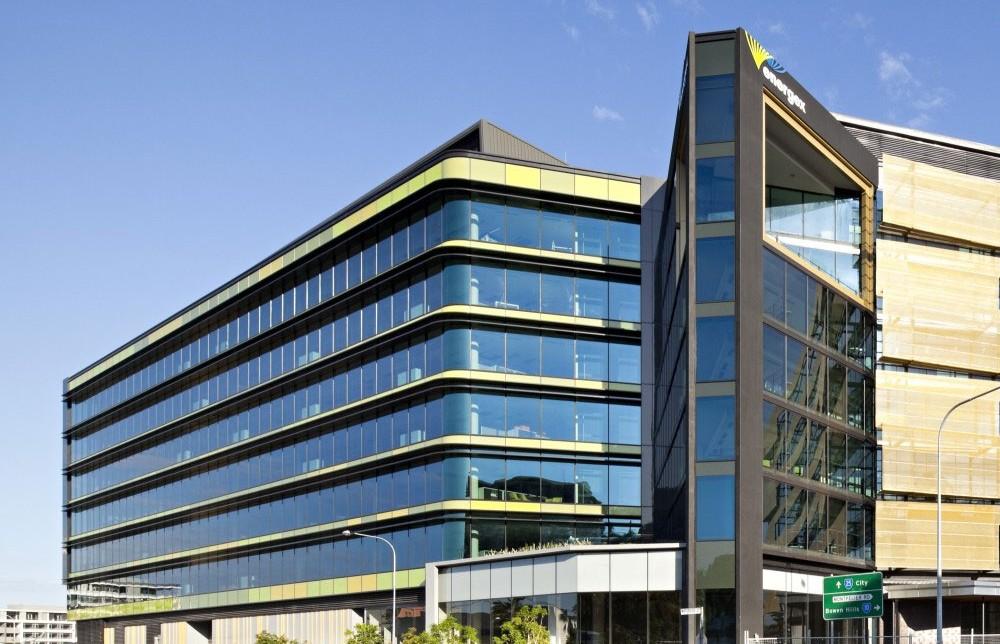 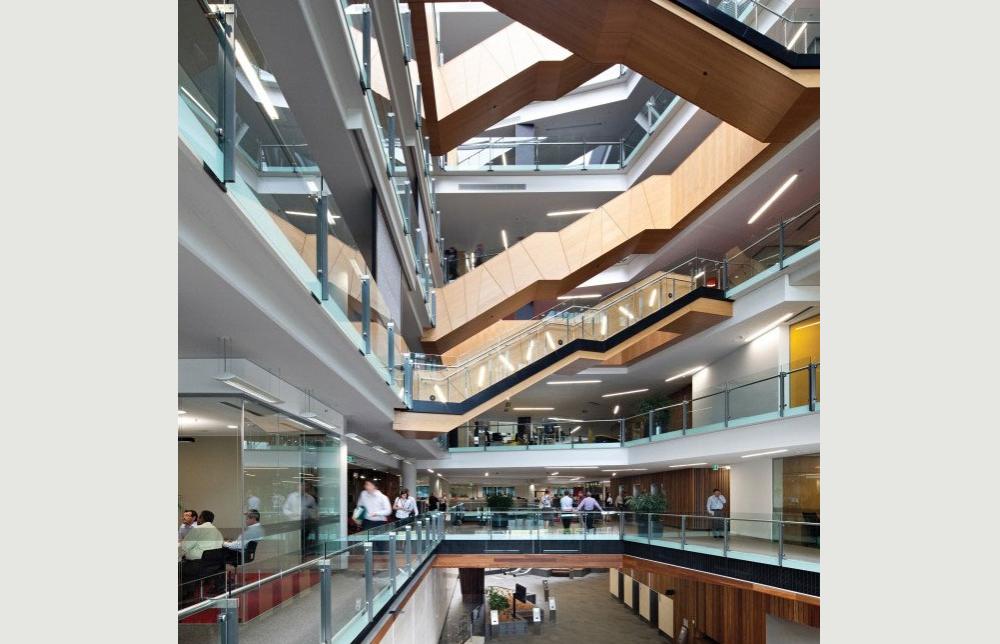 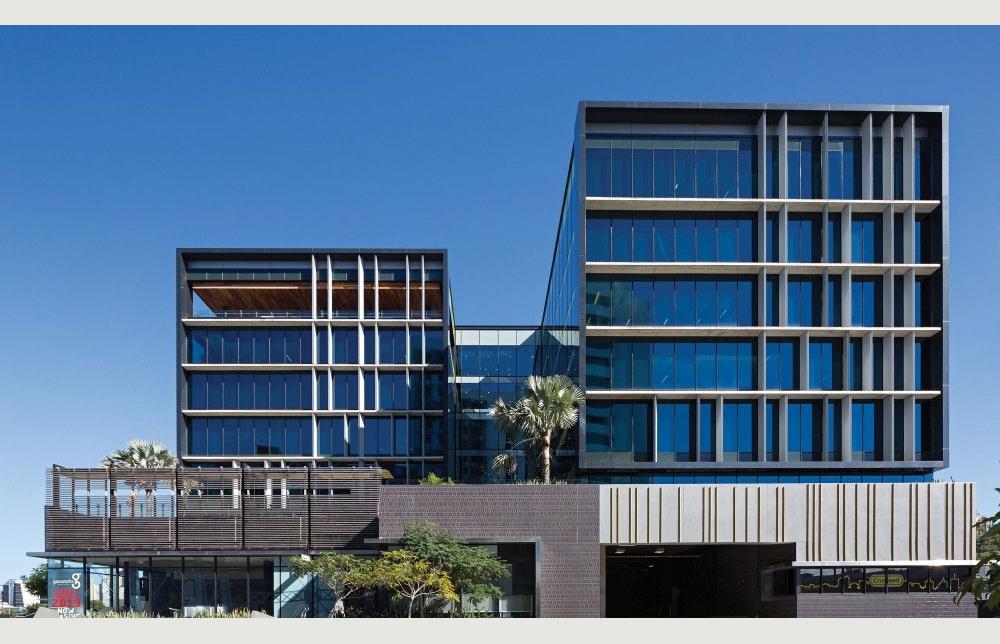 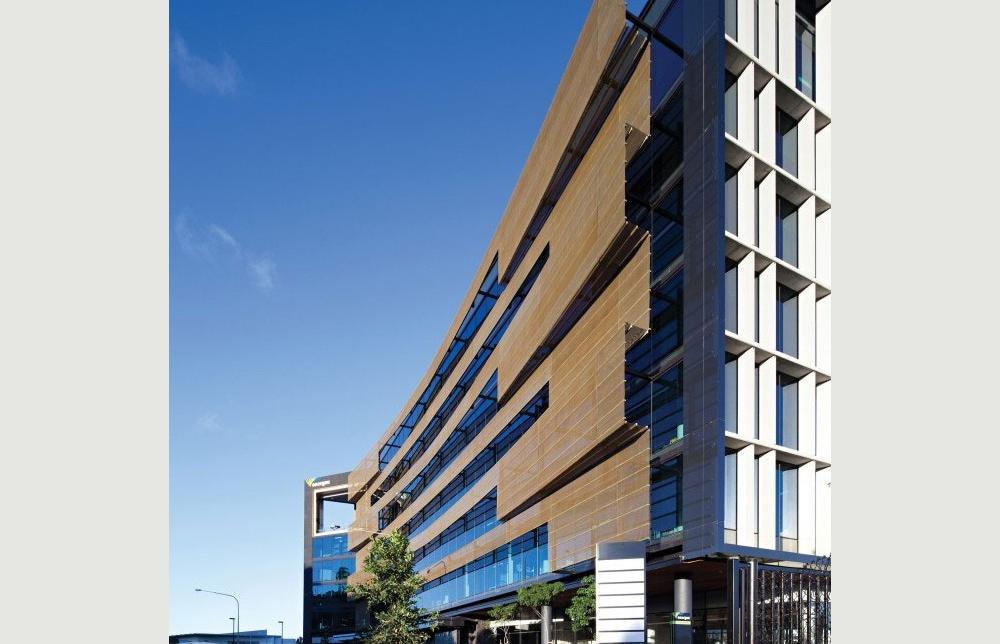 Energex Headquarters is the first major commercial building in Newstead Riverpark, the centrepiece precinct of Newstead-Teneriffe which is Queensland’s largest urban renewal project.  Riverpark was originally masterplanned by Cox Rayner for Brisbane City Council and we subsequently planned FKP’s half-portion including for the Energex building.

As Queensland’s leading provider of LPG and natural gas (as well as electricity), it is fitting that the precinct was Brisbane’s historic gasworks site.  The building was jointly designed by Cox Rayner (architecture) and BVN Donovan Hill (fitout) to meet Energex’s aspirations of a vibrant and cohesive working community, visible as such to the people of Brisbane.

It comprises 7 levels each of 4,180m2, longitudinally divided by a dramatically bridge-linked atrium that connects the interior to the external public realm.  The form wraps around the northern corner of Riverpark like a clasp, accentuated by a projecting ‘hinge’ that comprises further social spaces visible to the major street interface.

Conceptual Framework
The concept was to fulfil Energex’s aspirations for a cohesive, spirited working community for its many people, simultaneous with characterising Riverpark with outstanding urban design.  Both objectives were achieved by the notion of a crafted atrium-centred building bathed in natural daylight, scaled to foster human interaction, and distinctly occupying the prominent northern corner of Riverpark.  It is experienced as a dynamic element to passing traffic externally, to visitors close-up, and to staff for whom the bridge-linked atrium space and linear floorplates generate equally vibrant social and working environments.

Public and Cultural Benefits
The linear full-length atrium acts as a ‘park within the park’ inviting public access and extending the concept of the Riverpark master plan.  The project demonstrates how a very large commercial office building (31,500m2 GFA) can be designed to a scale and form that is human, and conducive to its public park and street setting.  Culturally, the design achieves its key objective of generating workplace communities that delight and stimulate staff from large corporations (1,750 people) that otherwise are typically anonymous and deflating in character.

Relationship of Built Form to Context
The building employs its length, scale and geometry to form a clasp embracing Newstead Riverpark.  It provides distinctive and different interfaces to all of its aspects, tailored to their urban fabric, street and open space interrelationships.  It is spatially spectacular and offers strong external appreciation of its inner workings, simultaneously contiguously connecting the River Park into and along the heart of the building.

Program Resolution
The brief set required floorplate sizes, determining scale but enabling us to create a captivating, daylight-filled internal volume which met the client’s desire for optimised visual and social interaction, and for continuous appreciation of collective purpose of the Energex organisation.  The linear, angled floorplates provide Energex with its necessary flexibility of activity to meet changing energy demands.

Allied Disciplines
Cox Rayner were responsible for the base building, with BVN Architecture responsible for integrated fitout. Our two practice’s collaboration was outstanding, with mutually agreed goals and philosophies manifesting in what we and our client consider exemplary in integrating of architecture and interior space.

Response to Client and User Needs
Energex CEO Terry Effeney: “It is a great building!”  As the current owner Cromwell Property Group have noted the building has resulted for Energex in “improved communications, improved productivity and reduced absenteeism”.

Sustainability
Energex Headquarters is only the sixth building in Queensland to be awarded 6 Star Green Star Office As-Built (v2) status.  However, it is its holistic set of architectural and technological measures that set it apart and were embedded in the design process.  It firstly establishes a sustainable planning system for campus office buildings, comprising parallel 20m wide linear plates separated by a ventilated EFTE cushion roofed atrium for daylight penetration.  It secondly relates external solar devices to each elevation to precise orientation controls, from which the architectural character is derived.  Technologically, it cuts CO2 emissions by 2,100 tonnes pa (equal to 520 cars on the road), has a 200,000 litre rain tank delivering 55% mains water reduction, provides air flow at 150% above Australian Standards, provides 50% less parking than the planning allowance, utilised 50% cement from waste, and 60% of its steel is from recycled content, among many other strategies.